1963 was a big year in the US, and not necessarily a happy one because it was the year when JFK was shot. But in the numismatic space, especially for penny enthusiasts, a slight shift in the metal composition made 1963 1-cent coins valuable. It’s the year when tin was removed from the coin. More on that later. For now, let’s start with a 1963 Penny Value price chart.

You probably know the United States used to be a British colony. It’s why we use dollars and cents, but we still refer to our 1-cent coin as a penny, since that’s what they call it in the UK. And although you can’t buy much with a penny in the US today, you can still trade one for a lot of money if it’s in the right condition. But first, let’s take a closer look at the coin’s history.

The Lincoln Cent was introduced in 1909 to celebrate a hundred years since President Abraham Lincoln’s birth (12th February 1809). The idea was to produce a coin that honored one of the most popular US presidents. Also, President Theodore Roosevelt had requested the mint to hire professional artists who could beautify the designs on existing US currency.

As a result of this president’s lobbying, the Lincoln Cent was developed by sculptor Victor David Brenner. Initially, the penny was 95% copper with the remaining 5% being a mixture of tin and zinc. In 1943, most wartime pennies were 99% low-grade carbon steel with a 1% zinc coating on top. After 1982, the penny changed to 97.5% zinc with a 2.5% copper coating.

In 1959, to celebrate 150 years since Lincoln’s birth, the mint changed the design on the back of the penny. They replaced the earlier wheat stalks with a sculpture of the Lincoln Memorial for the next fifty years or so. 1-cent coins from 1909 to 1958 were called Wheat Pennies while the 1959 to 2008 ones were Lincoln Memorial Cents. Next came Bicentennial Cents in 2009.

But 1963 was interesting because of a slight internal shift that not many people noticed. Late in 1962, the mint eliminated tin from the coin, so the metal mix was now 95% copper and 5% zinc. The following few years saw a coin shortage. Citizens hoarded coins for bullion, relying on their melt value. These silver stackers caused changes to the country’s currency policies.

Coin Shortages and Currency Policies in the 1960s

Initially, coins were made of gold or silver. These are known as specie metals. But factors like war requirements, the gold rush, the expansion of silver mines, and fluctuating prices made citizens hoard coins and melt them for their precious metals. The US Mint solved this by switching to base metals like tin, nickel, copper, and zinc. But the first three were war metals.

So during contentious years, even the coins made of copper, nickel, or tin got hoarded. At times, it was just a habit and led to people hoarding any coin, whether or not its melt value was profitable. In the 1963 penny, this hoarding habit made the mint ditch tin. In the next two or three years, mint marks were removed as well, to allegedly discourage numismatists.

Apart from extracting the penny’s tin content, 1962 and 1963 were experimental years at the mint. To deal with coin hoarders and silver stackers, the mint tried different metals and non-metals such as vanadium, antimony, aluminum, silicone, and even plastic as replacements for specie coins. So collectors were already on the lookout for unusual 1962 and 1963 coins.

Also, we’ve mentioned JFK’s assassination. Within a month of his death, he was honored with the Kennedy Half Dollar. Many people kept this coin for sentimental reasons and few ever entered circulation. As a side effect, more and more people got interested in coin collection and speculation. So it makes sense that contemporary coins got popular as well.

This could be part of the reason why 1963 pennies still draw interest. If you had stashed some 1964 Kennedy Half Dollars, you would also seek other denominations from 1963. And this historic value has continued today, where 1963 pennies still tease collectors even though they’re not worth much on the open market. The absence of San Francisco cents helped too.

The 1963 Penny is a Lincoln Memorial Penny. These pennies are gorgeous in high grades because if you peek between the central columns, you can see the statue of Lincoln sitting pretty. This detail is lost on many circulated coins, so if you can see it, you have a top seller! 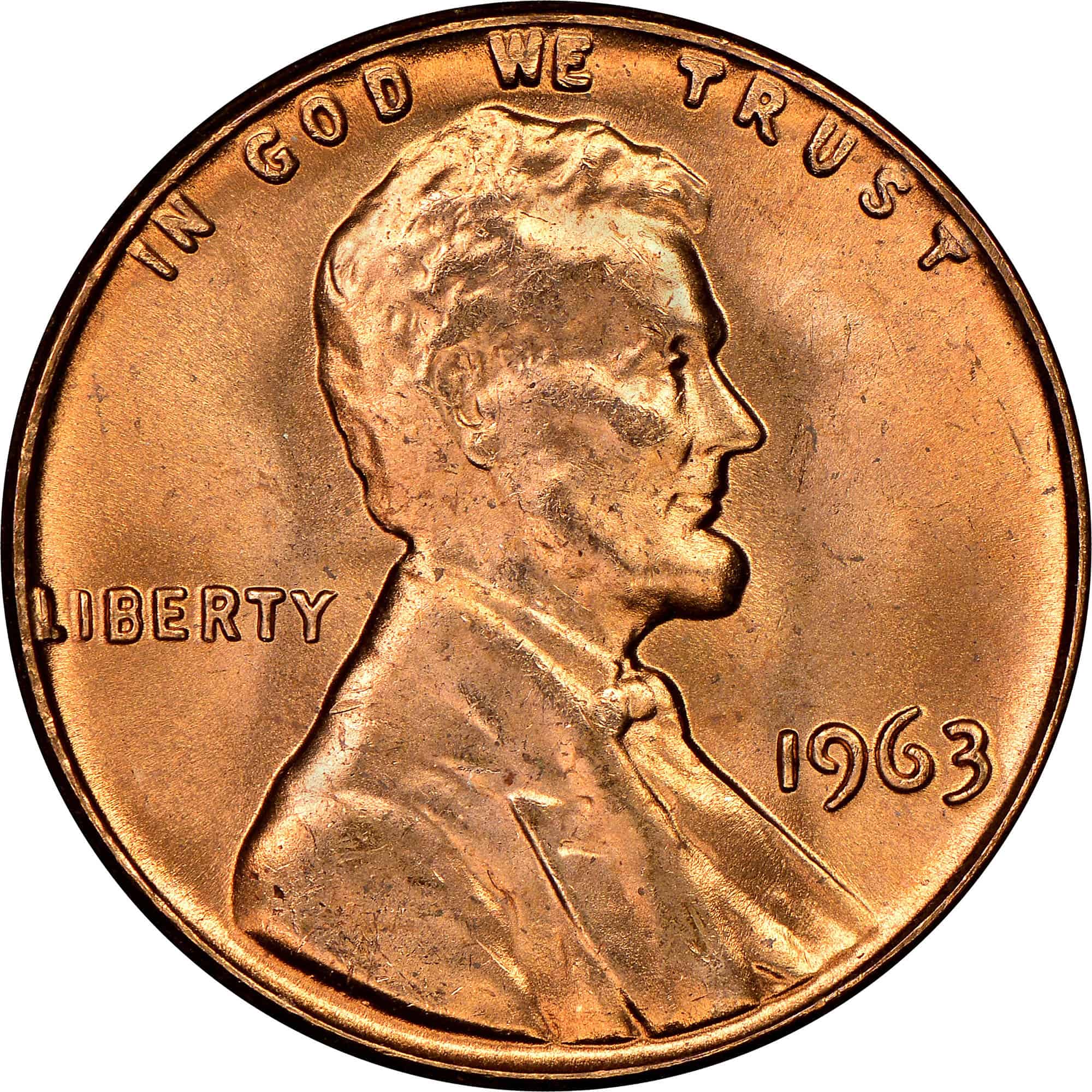 The obverse (heads side) of the 1963 penny has a portrait of Abraham Lincoln. Notably, he was the first well-known human on any US currency. Previously, symbolic images of Lady Liberty or Native American Chiefs graced the coins, so Lincoln was the first recognizable model, and also the first US President to appear on American money. It was a policy issue.

Why? George Washington (1st US President) felt putting leaders on coins was ‘too much like the monarchy’. The coin has the words In God We Trust above Lincoln’s head with Liberty on the left behind his back. The date and mint mark were placed on the right, in front of his chest. VDB appears on the shoulder cut-off to identify the designer, Victor David Brenner. 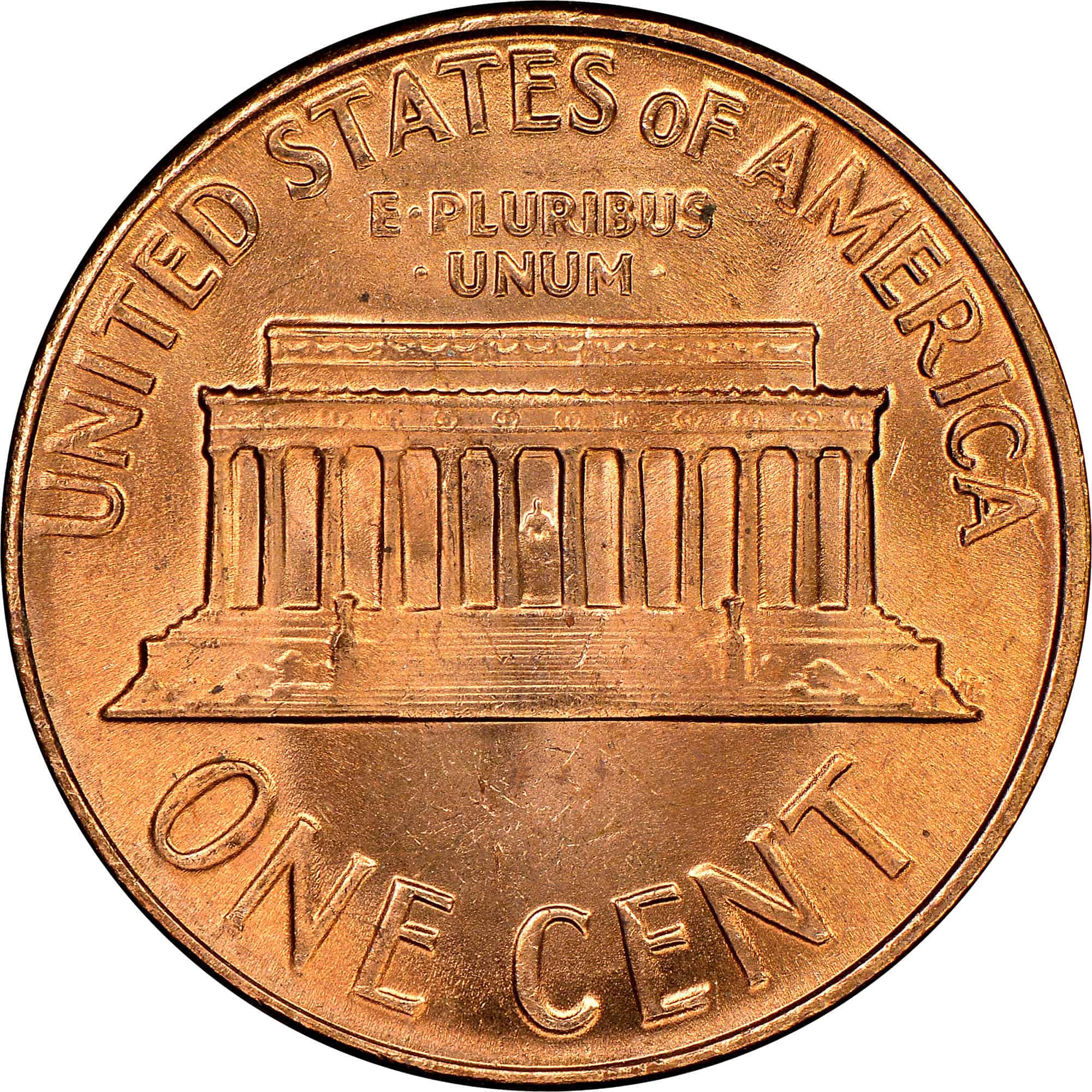 The Reverse (tails side) of the 1963 Penny is dominated by a sculpture of the Lincoln Memorial. As we said before, you can see the statue between the central columns, but it ranges from a few vague scratches to a distinct silhouette, depending on the condition of the coin. On the right of the building, a tiny FG verifies the reverse designer as Frank Gasparro.

Above the building, E Pluribus Unum is tucked beneath the uppermost legend, United States of America. The motto has a dot between E and Pluribus with two more dots on either side of Unum. The lower collar has the denomination, One Cent, spelled out in a large font. The collar legends are curved but the E Pluribus Unum is laid out horizontally above the roof.

Other Features of the 1963 Penny

The 1963 Penny shares dimensions with other Lincoln Memorial Cents. It’s 19.05mm in diameter (0.75”) with a smooth edge and no reeds. The removal of tin didn’t affect the weight of the coin since they added more zinc to cover the shortfall. So these 1963 pennies weigh about 3.11g. In average conditions, these coins are worth their (copper) melt value of $0.02.

Only two mints made pennies in 1963 – Denver and Philadelphia. Over 2.5B coins were produced in total, and none of them came from San Francisco. Let’s look at their valuations. 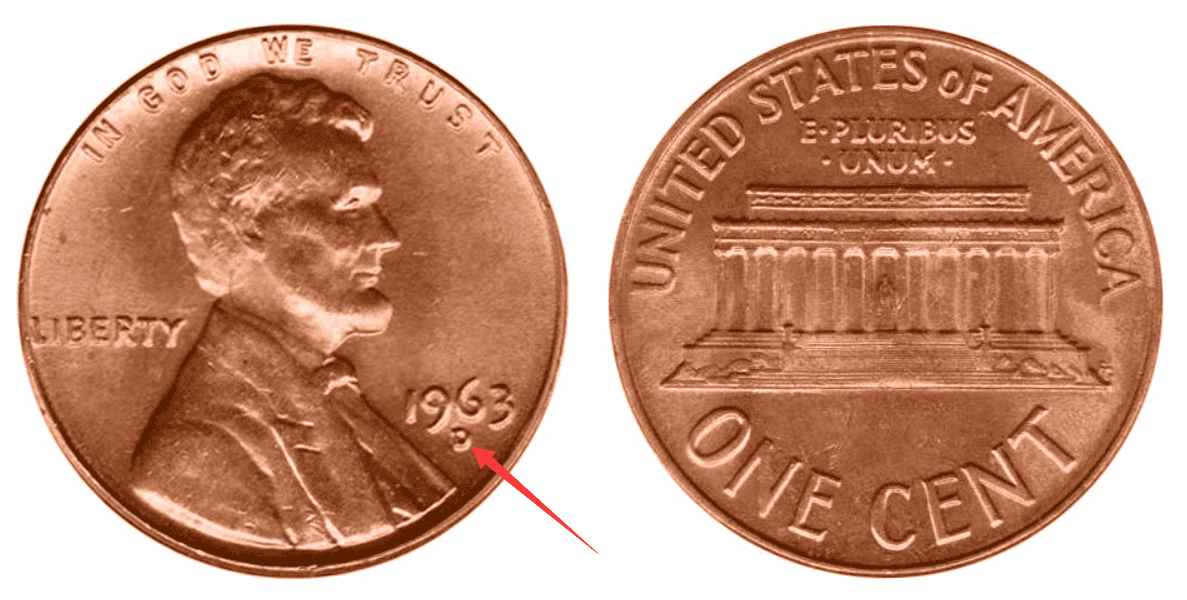 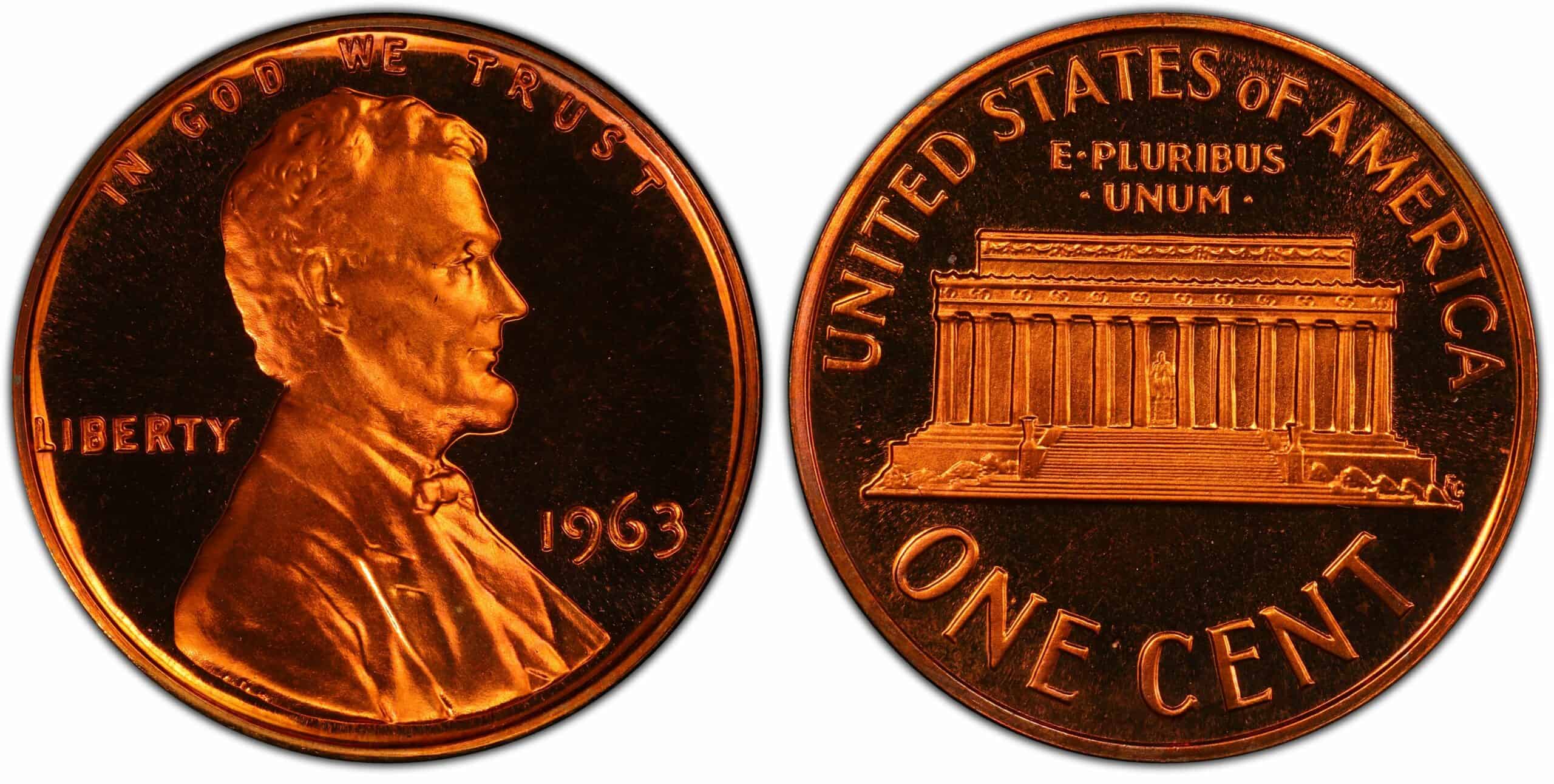 As we mentioned above, over 3M proof pennies exited the Philadelphia Mint in 1963. Proof pennies are struck on burnished planchets with specialty dies. Usually, the first 50 to 100 coins will have a cameo effect (CAM), where the field (background) is mirrored and the device (image) is frosted. The next 100 coins may have a less pronounced D-CAM contrast.

D-CAM or Deep Cameo means the device is less hazy but there’s still a sharp difference between the mirrored field and the frosted device. And reverse proofs will have a mirrored device (image or portrait) and a frosted field (backdrop). A 1963 Proof Penny graded PR 70 D-CAM sold for $40,250 back in 2014. But one step down, a PR 69 D-CAM was only $540.

On most antiques and vintage items, an error can reduce the value to zero. But in the world of coins, the right flaw can be worth hundreds or even thousands of dollars. This depends on the type of error and the condition of the coin, so let’s look at 1-cent mistakes that add value.

DDO errors (Double Die Obverse) happen if the die shifts while it’s being formed in the hub. As a result, all coins minted with that flawed die will have the same double die error. It’s easy to spot the doubling on the words and numbers, so check the mint date with a microscope if you need to. This penny sells for $20 in MS 62 RB, $40 in AU 53 B, and $305 in MS 65 RD.

The mint marker used a mallet and a hand-held punch, and this went on until 1989. So RPMs could happen quite easily. It could be the same mint mark punched two, three, or four times. Or it could be marks from different mints. But 1963 RPMs are only worth $3 to $5.

On later pennies (from the 2010s), you may find Wide AM and Narrow AM errors. These concern the spacing between A and M in America, which runs along the reverse top collar of the coin. But in 1963 pennies, spacing mistakes (or kerning errors) were more common on Liberty. An extra I seems to sit between the B and the E. It’s a die break and it’s worth $5.

As dies get older, they develop cracks and breaks than can transfer onto the coin. These are called cud errors, and the BIE is one example. But as we said earlier, planchets (disc-shaped coin blanks), dies, and hubs are all struck multiple times before you get the finished product.

DDR means Double Die Reverse. It suggests the die used to mint the reverse of the coin was flawed, and that it shifted between strikes by the working hub. This movement caused some doubling on the word America and FG’s initials, though the error is seen most clearly on proof coins. In PR 64 or MS 64, you can get $50 for the coin. In PR 66 or MS 66, that’s $350.

1963 Penny Struck on a Dime Planchet

Sometimes, a coin is stamped on a planchet with the wrong denomination, metal mix, or even another country! You can spot one by weighing it, checking the design, or verifying the coloration. A coin microscope is useful for checking DDOs and DDRs. 1963 Cents struck on a silver dime (10c) seem truncated and may have reeds. In MS 62, one coin sold for $4,600.

On occasion, a coin (or even a pre-coined planchet) develops a puncture, crack, gash, or hole that goes clear through the coin. It could be a smooth, symmetrical hole from a drill, or it could be a jagged one from unknown sources. They’re sometimes described as blow holes, and a sample of a 1963 penny with a blow hole error sold for $253 in a high-grade MS 64 RB.

Are Pennies from 1963 Worth Anything?