Since the US Mint minted Franklin half-dollars from 1940 to 1963, those struck in 1963 were the last in a series. Basically, their replacement was the result of President Kennedy’s assassination, and the new half-dollar appeared to honor his memory.

The 1963 half dollar value depends on each specimen condition, the mint mark, and variation. For instance, pieces with full bell lines are always worth more than regular coins, particularly if you look for proof-like or deep mirror-proof-like ones.

History of the 1963 Franklin Half Dollar

The US Mint produced the Franklin half-dollar series from 1948 to 1963 based on John R. Sinnock‘s design, but sculptor Gilroy Roberts finished the task after the primary designer passed away. The idea of putting the most beloved Founding Father on the coin obverse came from then-mint director Nellie Tayloe Ross.

She admired Franklin and wanted to add him to the list of famous Americans minted on coinage. Unfortunately, this American half-dollar series was the shortest after the Civil War.

Such shorting was not planned, but the minting was interrupted after the Kennedy assassination. Then, the US Mint started a new series in honor of the beloved 35th American President.

Choosing Benjamin Franklin for the obverse made the coin undoubtedly popular from the very beginning. The only problem was the designer’s initials, JS, since many Americans believed they referred to former Soviet President Stalin.

Despite the popularity, this set is without rare and atypical pieces. On the other hand, it is an excellent opportunity for collectors on a budget and even novices to start a beautiful but affordable collection.

Features of the 1963 Franklin Half Dollar

Two engravers designed this beautiful coin in honor of one of the Founding Fathers. The Liberty bell symbolically shows the crucial American values from the founding of this great nation to the present day.

The obverse of the 1963 Franklin half-dollar 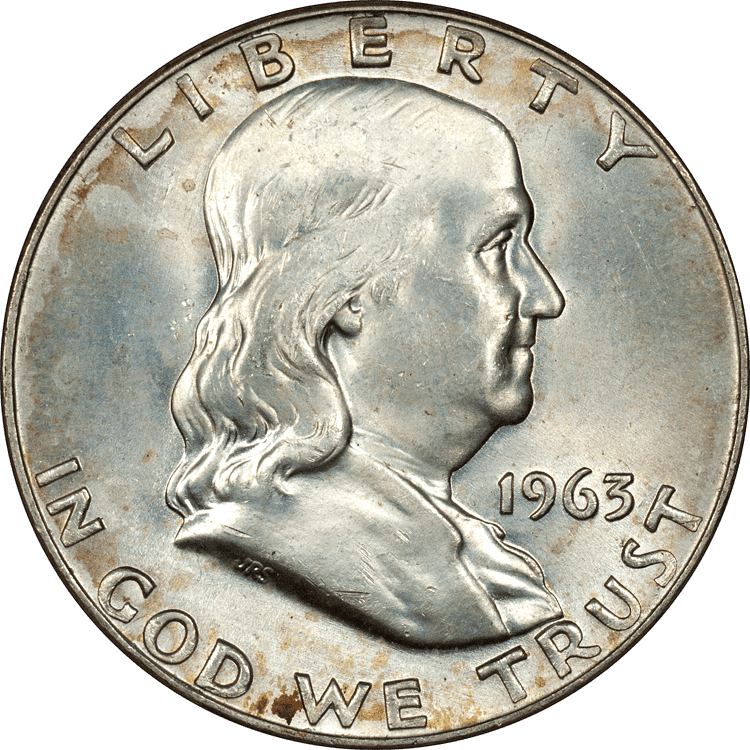 The eighth Chief Engraver, John R. Sinnock, designed the 1963 Franklin half-dollar obverse with the Benjamin Franklin bust in the center. You can see the inscriptions IN GOD WE TRUST and LIBERTY along the coin rim and the DATE on the right.

The reverse of the 1963 Franklin half-dollar 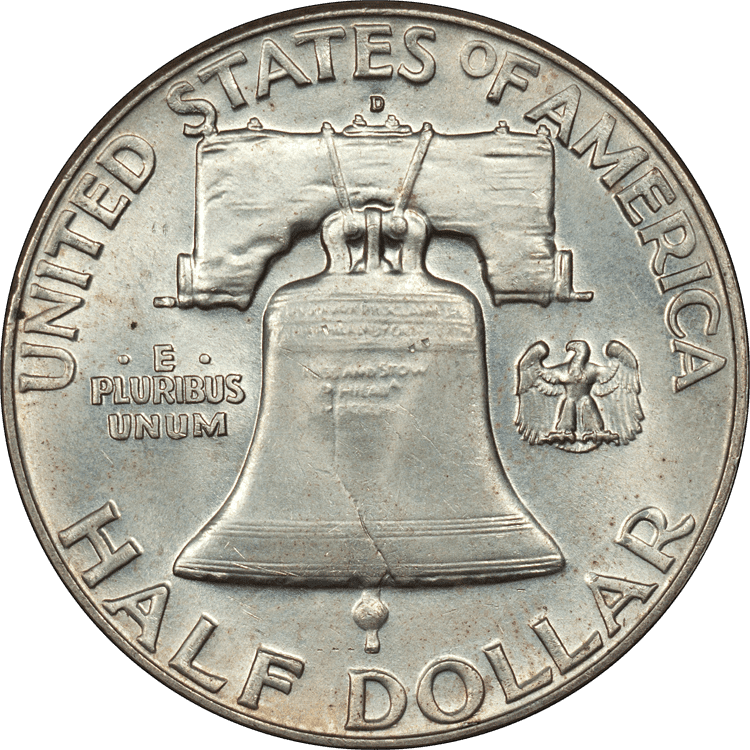 American sculptor Gilroy Roberts helped Sinnock to create this complicated but beautiful coin reverse. The central position is reserved for the Liberty bell, surrounded by the country name and denomination.

The Latin motto E PLURIBUS UNUM, written in small letters, is placed on the left, while you can see an eagle on the right. Coins struck in Denver also have the D letter above the yoke, representing the mint mark.

Other features of the 1963 Franklin half-dollar

This year, two mints produced 92,308,937 Franklin half dollars. Atypically, most came with the D mint mark on the reverse, while those minted in Philadelphia are without it. Besides coins from the regular strikes, this mint also struck a certain amount of proofs. 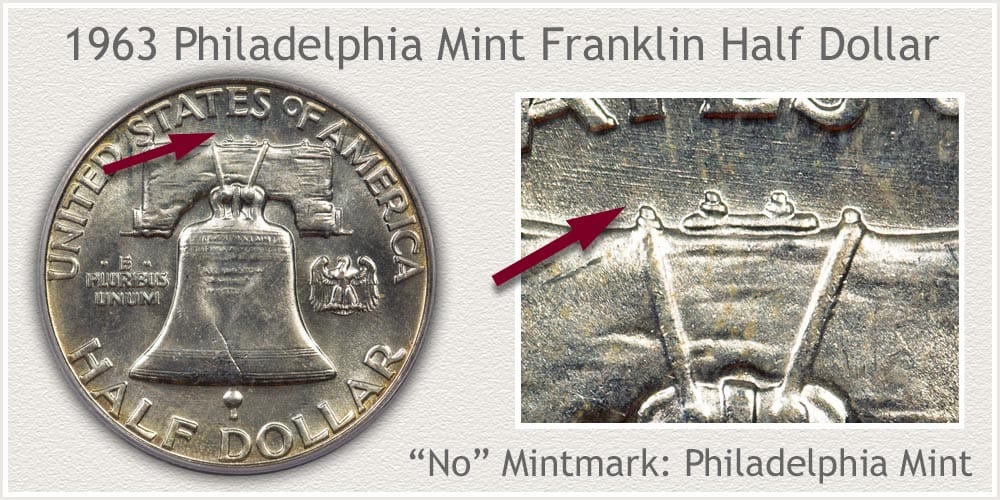 The Philadelphia mint wasn’t the one with the max mintage in 1963. It produced only 22,164,000 Franklin half dollars without the mint mark that year. Most pieces cost about $10 after years spent in circulation, while those in the mint state are worth $11 to $340. 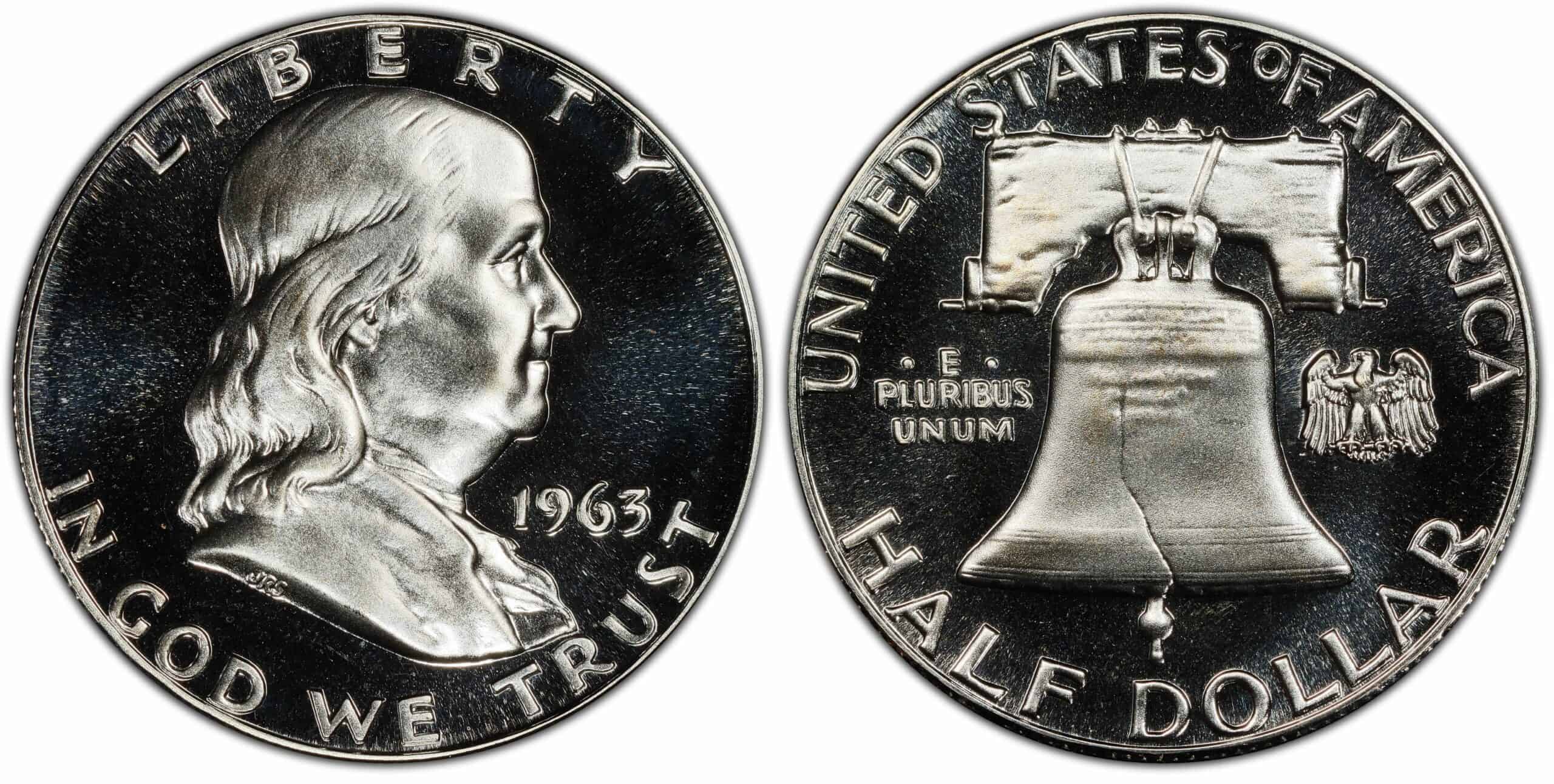 Besides an impressive mintage, the Philadelphia mint struck 3,075,645 proof half dollars in 1963. These coins’ price is higher than pieces from the regular strikes, and you can purchase one for $17 to $350. Their value primarily depends on the preservation level.

Collectors particularly appreciate halves with cameo contrast, and these pieces typically cost $20 to $520. On the other hand, specimens with a deep cameo contrast can be expensive. 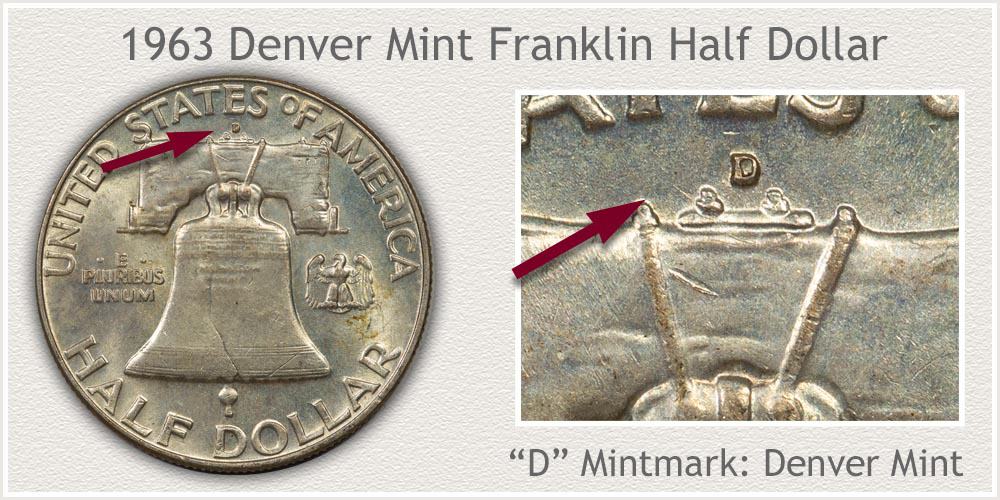 Interestingly, Denver was the center of the Franklin half-dollar minting in 1963. This mint produced 67,069,292 coins with the D mint mark but survived pieces still cost more than their face value.

Coins that have spent years in circulation typically cost about $10, while the price of uncirculated specimens varies depending on their condition. You can buy most pieces for $11 to $35, but those in an MS 66 grade are worth approximately $325 to $350.

The most expensive 1963 Franklin half-dollar is the one with full bell lines, sold for $16,800 in 2019 at Heritage Auctions. Five years earlier, one beautiful specimen from the regular strikes was paid $7,344 at the same auction.

1963 Franklin Half Dollar Variations and Errors

Besides Franklin half-dollar variety with full bell lines that is actually not an error but a perfectly struck coin, you can recognize a few well-known errors. They are not particularly common among coins minted this year but are always valuable.

You can sometimes find beautiful Franklin half dollars with full horizontal lines on the Liberty Bell and fully struck details on the coin reverse. These pieces are rare and highly collectible. In most cases, they cost at least 50% more than regular pieces.

Remember that all horizontal bell lines need to be distinct to qualify a particular coin as an FBL piece. When these lines are incomplete, the coin is considered a regular strike.

The Bugs Bunny Franklin half-dollar is the most recognizable error struck this year. It is an atypical and rare die clash error that resulted in Franklin with two buck teeth.

Compared to pieces with significant imperfections from some other years, these from 1963 are not particularly pricey. However, they are always worth more than coins from the regular strike. The auction records for such specimens are about $500.

The 1963 Franklin half-dollar with such an error was struck on the wrong planchet with an additional reverse mirror brockage. This imperfection combines two mint errors, making these coins expensive.

FAQ about the 1963 Franklin Half Dollar

What makes a 1963 Franklin half-dollar rare?

Franklin half dollars with specific Bugs Bunny and Double mint errors are unique and pretty rare. Therefore, you can expect them to be costly in the current coin market.

Which 1963 Franklin half-dollar is worth a lot of money?

How much is the 1963 No Mint mark Franklin half-dollar worth?

What is the most pricey Franklin half-dollar?