In most cases, the 1962 penny value is insignificant because of the high mintage and numerous preserved pieces. However, collectors like this particular Lincoln Memorial cent because it is the first in the brass series produced from 1962 to 1982.

After removing the tin, the composition was changed slightly, but experts recognize two pieces types struck this year. Only a limited number was produced with remaining tin residue, but this difference doesn’t make a change in prices.

History of the 1962 Lincoln Memorial Penny

Lincoln pennies are common coins struck from 1909 to nowadays. It is estimated that every American household keeps hundreds of pennies in piggy banks, drawers, and jars without knowing their historical significance.

The 1909 Lincoln wheat penny was the first US coin with a historical person on the obverse. Before its mintage, American coinage contained anonymous Native Americans or Lady Liberty because Americans considered showing real persons on coinage improper.

However, celebrating Abraham Lincoln’s 100th birthday changed everything. The 16th President was so popular that the nation accepted his portrait on the new coin, despite sporadic resistance.

Lithuanian-born American sculptor, Victor D. Brenner, designed a new penny with a simple and stark Lincoln portrait on the obverse. However, he made a mistake and added oversized initials under the date, making most Americans angry.

The US Mint quickly removed them, making coins with VDB lettering collectible nowadays. Initials were added again in 1918 but were modest and significantly smaller this time.

Even though the obverse has stayed the same over the years, the US Mint changed the reverse and composition several times. The second reverse appeared in 1959, marking Lincoln’s 150th birth anniversary.

Engraver Frank Gasparro created a new design with Lincoln Memorial that replaced famous wheat stalks. Interestingly, he added the President between pillars, making this coin unique, with the same person on both sides.

In 1962, appeared pennies with zinc instead of tin because it was cheaper. Technically, that turned a bronze penny into a coin made of brass without visible change in its appearance. The modern coin version contains copper-plated zinc alloy from 1982 because of the fast-rising copper price.

Features of the 1962 Lincoln Memorial Penny

The 1962 Lincoln Memorial pennies are 60 years old, making them collectible. However, they are considered modern, resulting in their relatively low price.

The obverse of the 1962 Lincoln penny 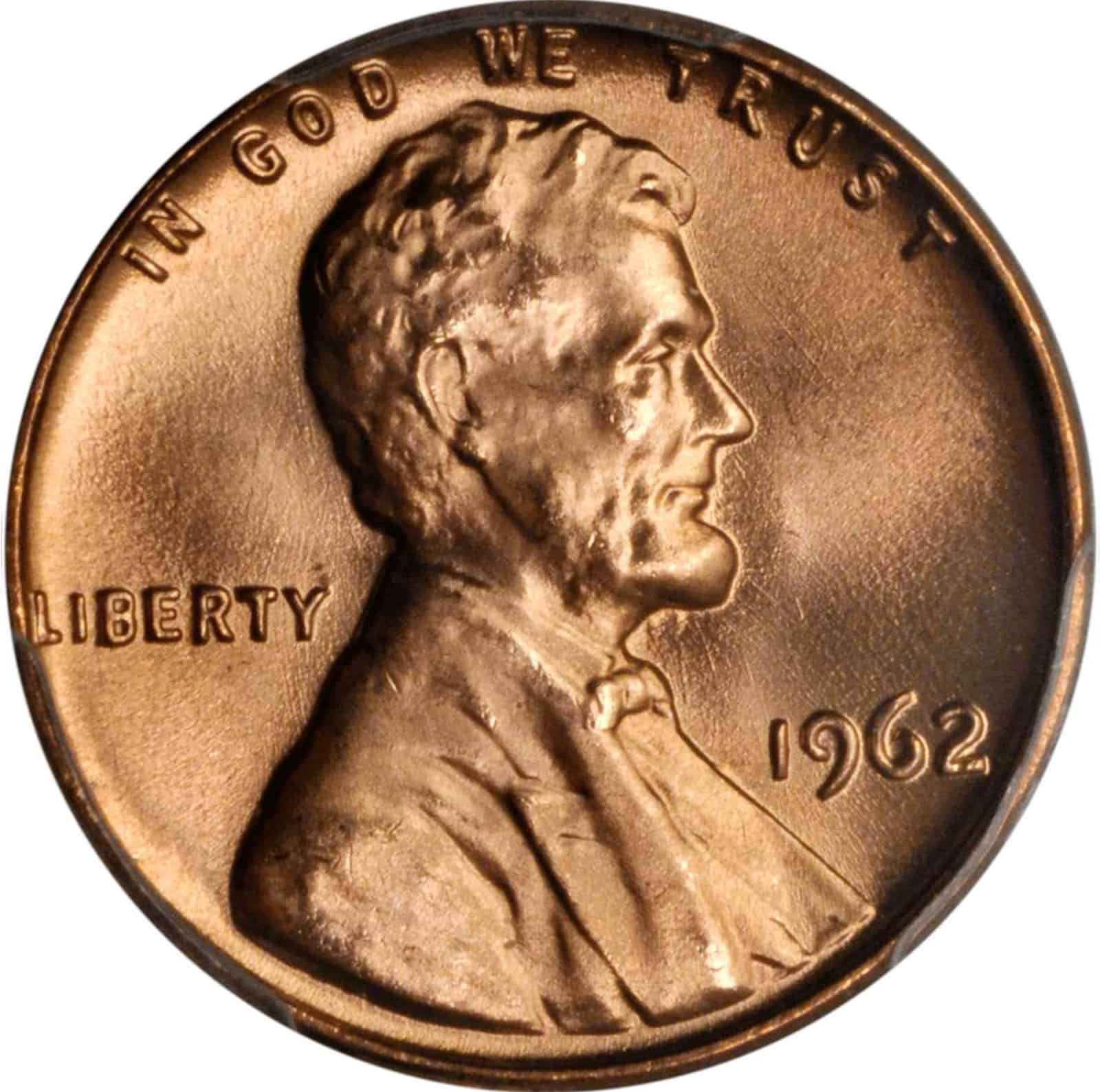 The 1962 Lincoln Memorial penny is a standard coin from the series containing the 16th US President on the obverse. As you can see, Lincoln’s bust facing right is centrally positioned with an inscription IN GOD WE TRUST along the top coin rim.

As always, the word LIBERTY is struck behind his back, while the appropriate DATE, 1962, is on the right coin side. You can quickly determine the mint where each piece was produced by the D mint mark struck under the date.

Coins produced in Philadelphia have this spot without the mark. Finally, the designer’s initials, VBD, are discretely positioned on the truncation.

The reverse of the 1962 Lincoln penny 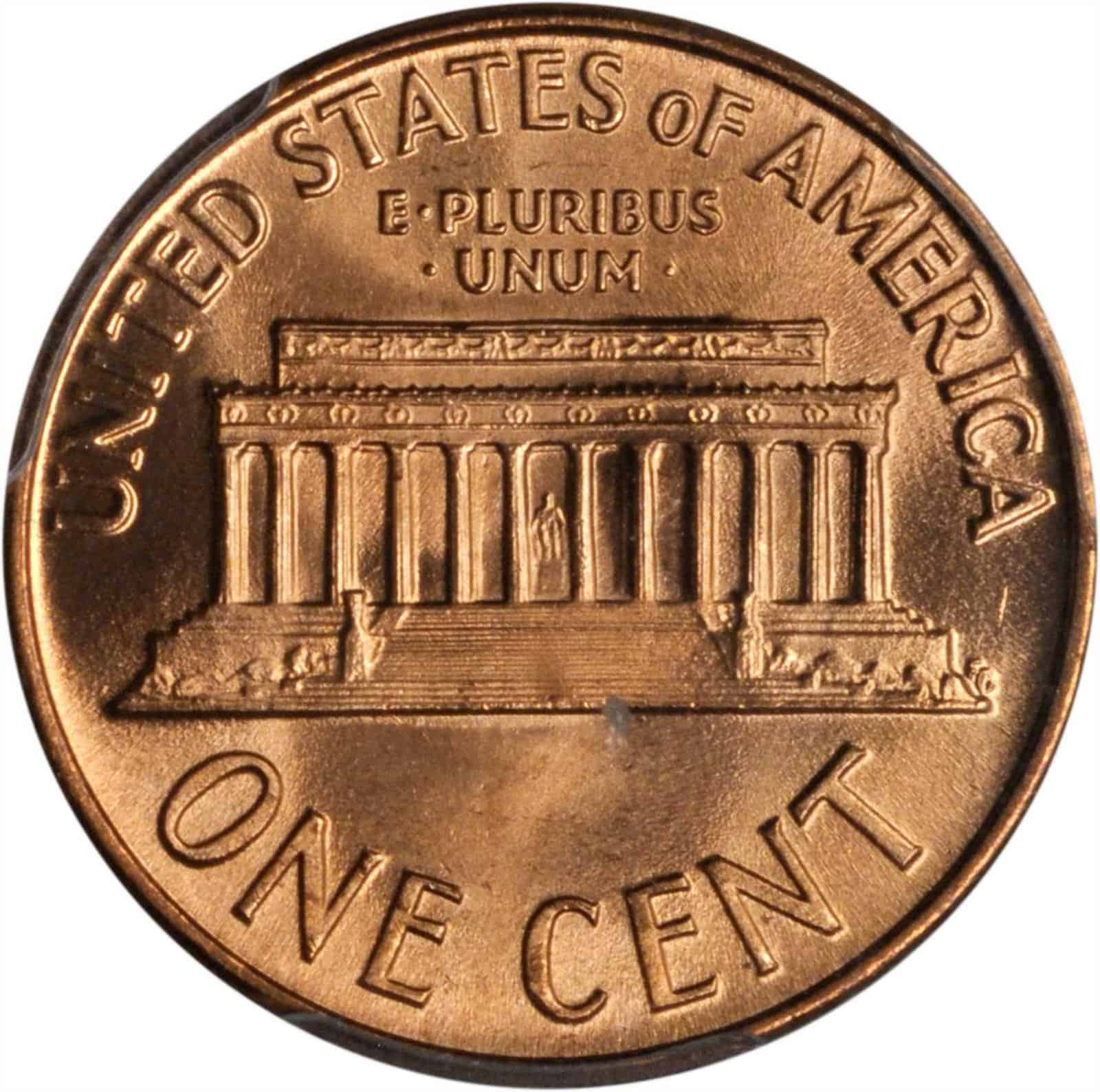 Like other Lincoln Memorial pennies produced from 1959 to 2008, those from 1962 have the Memorial on the reverse instead of the original wheat ears.

The designer created this coin side based on the Lincoln Memorial from Washington, DC, and positioned it centrally. You can notice the UNITED STATES OF AMERICA and the Latin saying E PLURIBUS UNUM above the building.

The ONE CENT denomination, written in capital letters, is struck below the building, along the bottom coin rim. Interestingly, you can see the small Lincoln statue between the pillars. The President’s occurrence on both sides makes this coin type unique.

Other features of the 1962 Lincoln penny

Unlike previous Lincoln Memorial pennies, those minted in 1962 have a bit different compound. After removing the tin, the new brass coins contained copper and zinc as the first such pieces in the series. 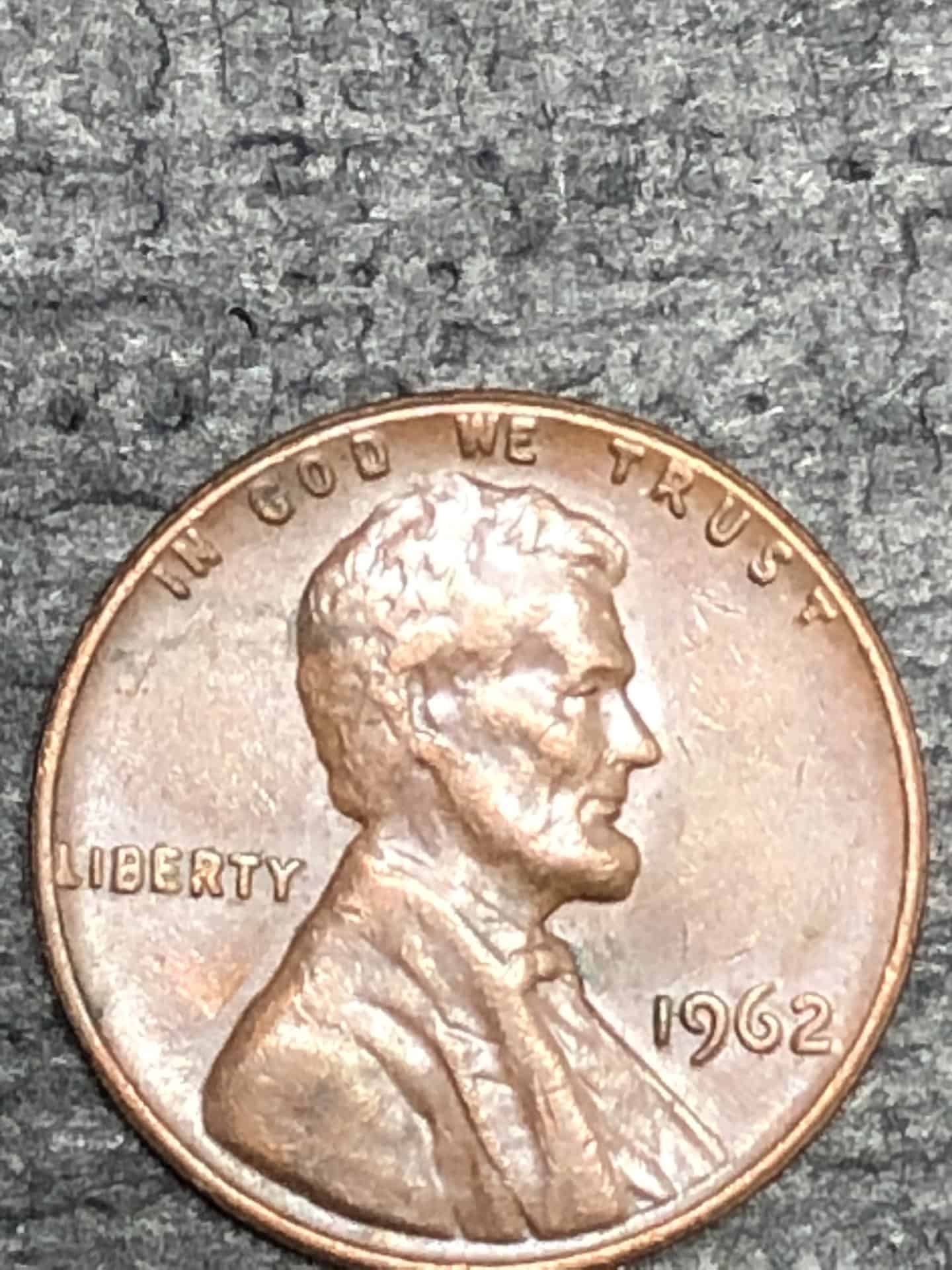 In 1962, the Philadelphia mint produced 606,045,000 Lincoln memorial pennies. Since pieces in the mint state cost approximately $0.40 to $3, those in circulated condition are not considered collectible.

You can expect coins rated over MS 66 and with an attractive red toning to be more expensive. You need to set aside $25 to $240 per such piece. However, a rare red Lincoln penny in an MS 67+ grade reached an impressive $8,813 at an auction in 2014. 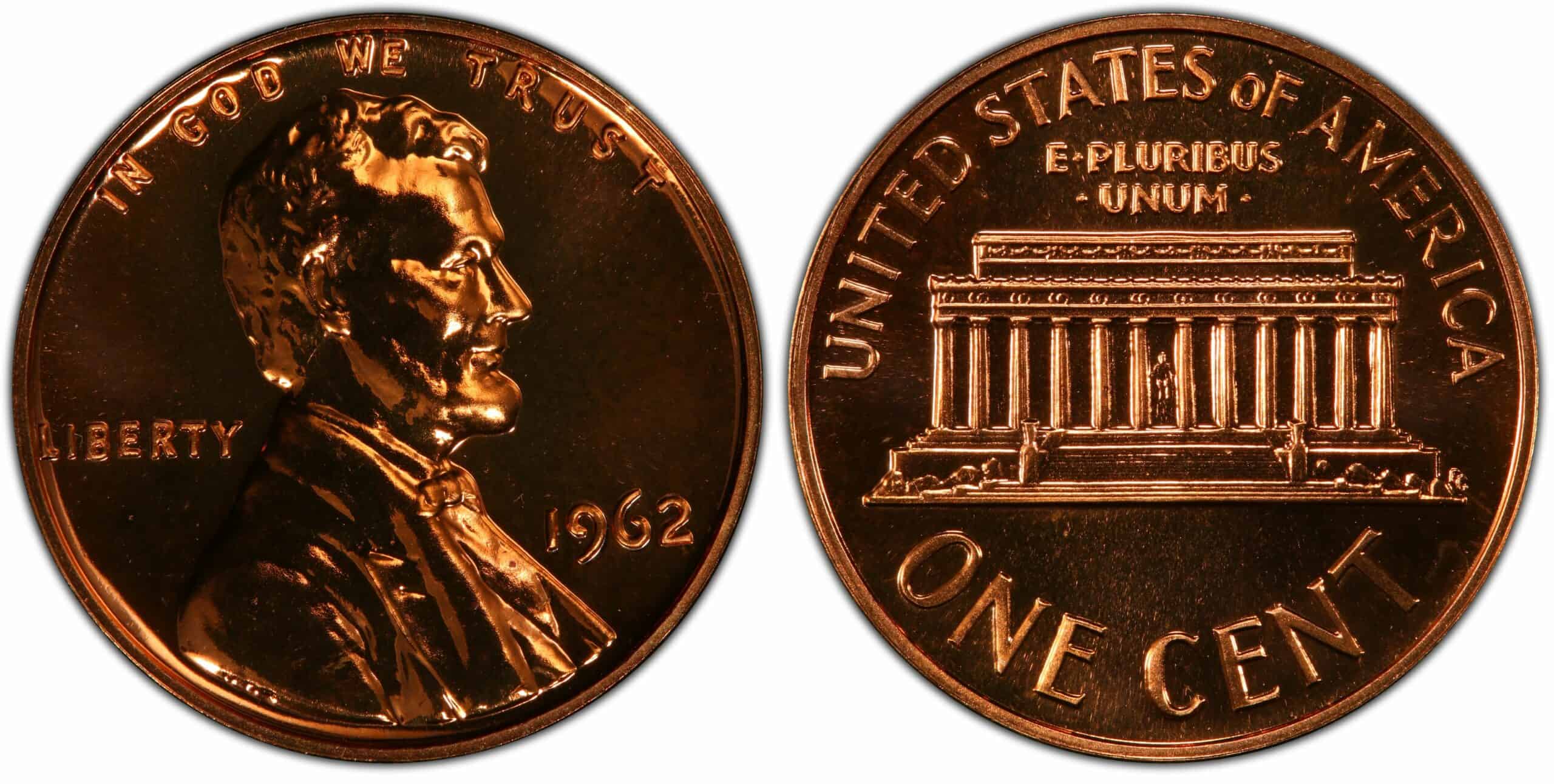 Besides regular strikes, the mint in Philadelphia produced 3,218,019 proof pennies in 1962. Most of these coins are worth less than a dollar, and you can expect more money only for the best-preserved ones.

For instance, one coin with a PR 69 rating costs about $50, but pieces with cameo and deep cameo contrast can be more costly. In most cases, their prices range from $85 to $475. 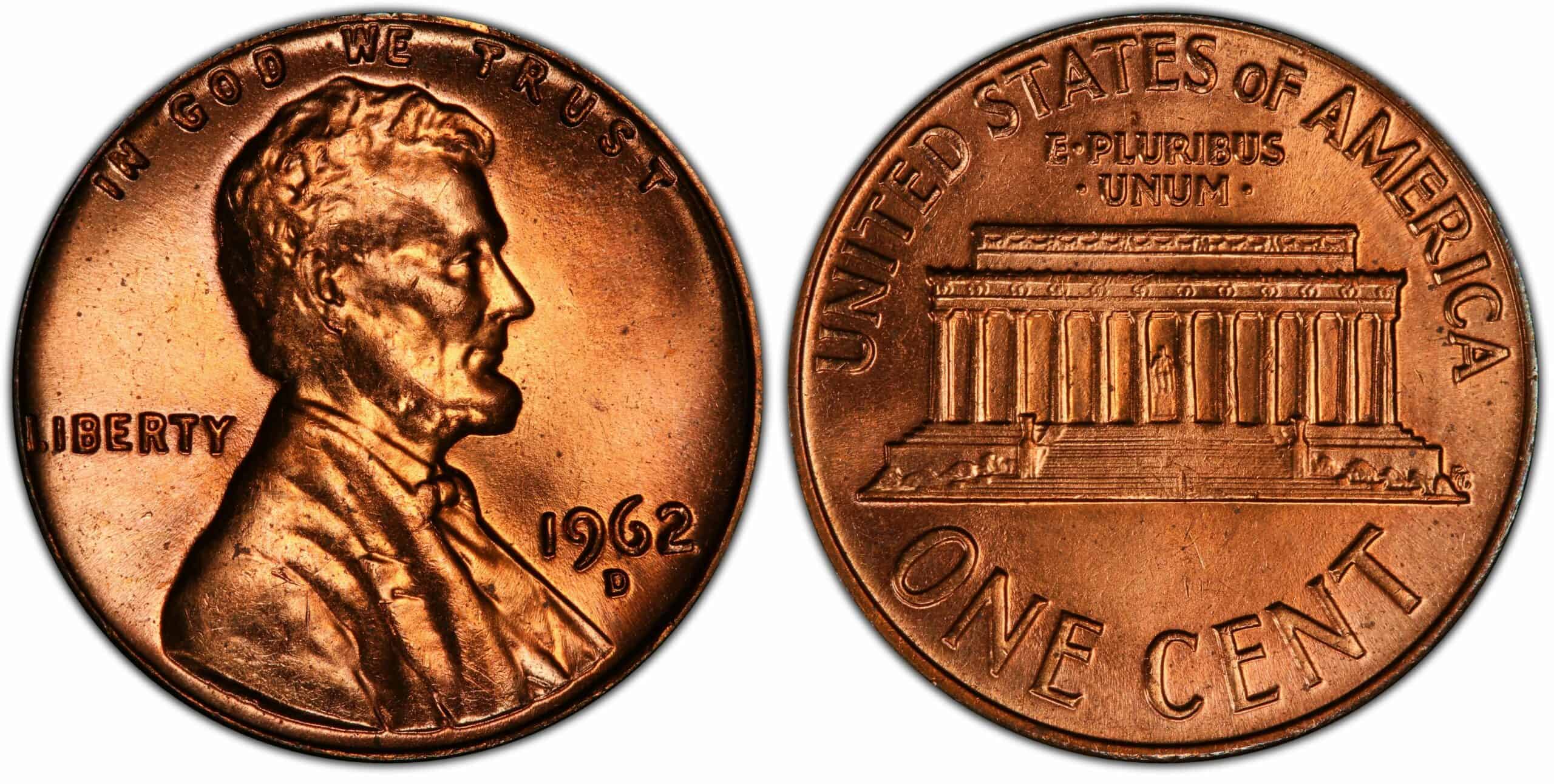 On the other hand, pennies with an MS 67 range are rare and typically cost $1,000. The most expensive Lincoln penny minted this year was the one with the D mint mark. Its high price of $12,000 was a real surprise at an auction in 2013. 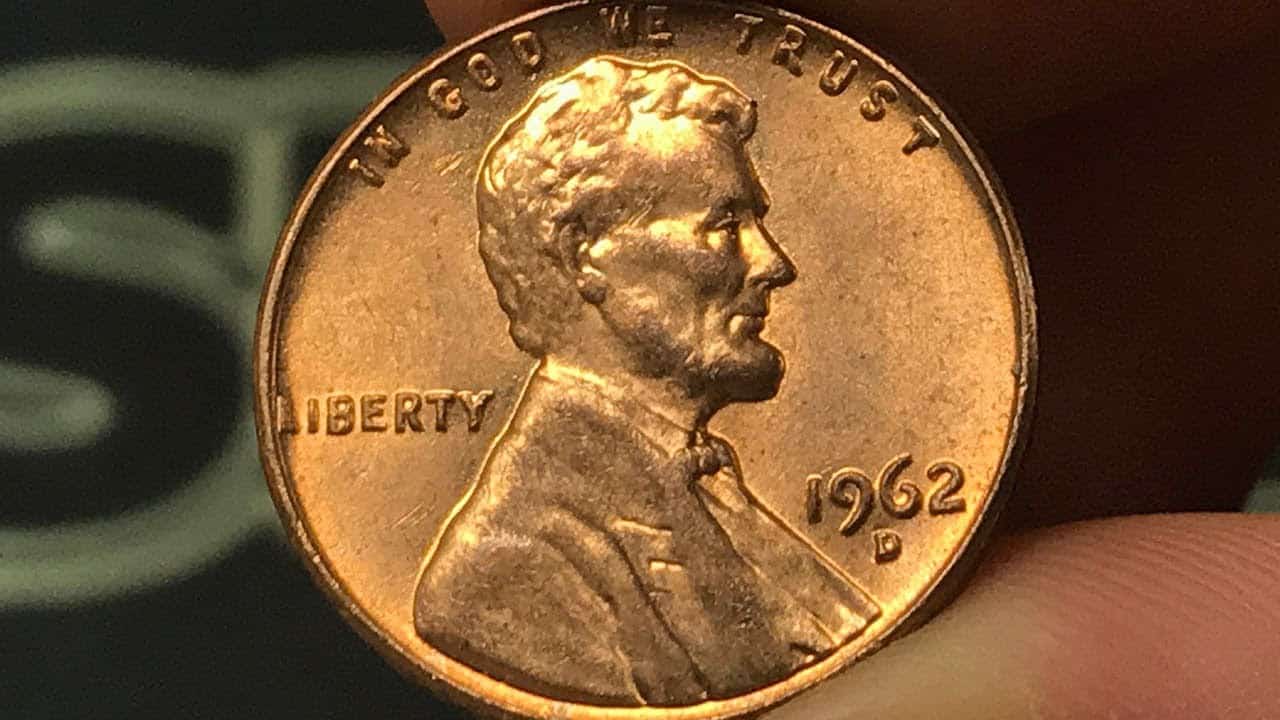 Technically, you can find errors and different anomalies created during production on Lincoln pennies from any year. Therefore, you should check the coin you have and compare it to other error examples.

If you suspect that the penny contains a valuable imperfection, you can check it with one of the trusted sources, like CONECA.

Some doubled dies contain a drastic design, letter, or numeral doubling, making them valuable. However, only pieces with clearly visible imperfections are precious.

Unfortunately, collectors have not yet discovered significant double dies on the 1962 cents. Those hidden within the date or lettering visible only under a magnifying glass are not worth much. In most cases, you can get $5 to $20 for them.

Some Lincoln pennies look like they have a capital letter I in the word LIBERTY, between B and E. These so-called BIE pennies are a variety of a die break and are rare in coins minted in 1962.

Their price is $5 to $10, depending on how strongly the letter I is struck. However, the price goes to $50 when the coin is in the mint state.

In the early 1960s, the US Mint struck mint marks onto individual working dies, and it was crucial to do it in the correct spot. Sometimes, human error caused incorrect punching onto the dies, and you can find cents minted in Denver with the crooked D mint mark.

Such pieces required correcting the letter D, which was initially placed at the wrong angle, and re-punching it with a new mint mark.

Interestingly, these coins are collectible, although this error type is common. In most cases, you can expect to pay $3 to $10 for this penny. Only rare pieces with a visible error can be worth more.

In rare cases, you can find the 1962 D Lincoln penny with almond-gold toning. This error appeared because of sticking the penny on a silver dime planchet. Such pieces can be valuable, and one coin in an MS 62 grade was sold for $823 at an auction in 2013.

FAQ about the 1962 Lincoln Memorial Penny

What makes a 1962 Lincoln penny rare?

Most 1962 Lincoln Memorial pennies are not rare because of the high mintage and numerous well-preserved pieces offered on the coin market. They are typically scratched or with uneven and dull luster and rough surfaces.

However, cents minted in Denver are considered scarce in an MS 67 grade, and you should set aside about $1,000 per one.

Which 1962 Lincoln penny is worth a lot of money?

How much is the 1962 No Mint mark Lincoln penny valuable?

Be aware that only 1962 Lincoln Memorial pennies in an uncirculated condition are collectible. The well-preserved pieces minted in Philadelphia cost about $0.40 to $3, but you can get $25 for a coin with MS 66 rating.

What is the most pricey Lincoln penny?

Any of the mysterious 1943 Lincoln pennies are the most pricey in the series. It seems that 20 to 40 coins were struck on copper-alloy planchets by accident.

Even though rare pieces typically reached a price of tens of thousands of dollars in previous auctions, one collector set aside $1.7 million to get one in 2019. That way, this piece became the most valuable penny worldwide.