In 1938, the Buffalo nickel production stopped, and the Jefferson nickel minting started. This 5-cent coin has become the most famous US Mint issue for more than 80 minting years. Plus, this piece is known as the third coin with one of the former American Presidents’ images on the obverse.

Although collectors are more interested in issues from an earlier period, especially specimens from the first decade of minting, most nickels are collectible. For the estimated 1962 nickel value to be as accurate as possible, you need to check its condition and the mint mark. Let’s do that!

History of the 1962 Jefferson Nickel

Franklin Delano Roosevelt became the 32nd President of the US in 1933, during the Great Depression. From the very beginning of his presidency, he led an unprecedented legislative activity intending to implement reforms for the country’s recovery.

As a passionate collector and Thomas Jefferson’s great admirer, he didn’t miss the opportunity to pay tribute to his predecessor. In 1938, after 25 years mandatory for the Buffalo nickels’ minting, the administration decided to replace them with new five-cent coins showing the 3rd President on the obverse.

Even though that was not a common practice until then, the administration announced an open competition for conceptual solutions for the new coins’ appearance. The only competition conditions were:

A prize of $1,000 waited for the winner, and little less than 400 works were applied for this purpose. Interestingly, some artists sent more than one work. Although the judges had a hard time choosing just one of the submitted ideas, the winner was the sculptor Felix Schlag, a German immigrant.

However, the judges only approved the obverse design without objections but were dissatisfied with some reverse details. Schlag proposed a side view of Jefferson’s Virginia home, while the judges favored the Monticello depicted from the front side.

Additionally, the sculptor had to change the letters he used for the inscriptions. After initial corrections, the chosen design remained unchanged for the next eight decades.

The designer didn’t include his initials on the nickel’s design, whether by accident or on purpose. Therefore, you can see letters FS under Jefferson’s bust only on coins minted after 1966.

Although the nickels’ appearance has remained unchanged the same over the years, their composition was changed. Original pieces contained 75% copper and 25% nickel, but the increased need of the military industry for nickel during WWII caused the change.

Coins from that period, known as the Wartime nickels, came without nickel. They were made of copper with added silver and a small percentage of manganese instead.

Features of the 1962 Jefferson Nickel

Given that most of the minted nickels ended up in circulation, it was not unusual that the same situation occurred with the Jefferson nickels from 1962. Therefore, most of these 60-year-old coins show visible signs of wear nowadays. Even so, they can be valuable pieces in your collection.

The obverse of the 1962 Jefferson nickel 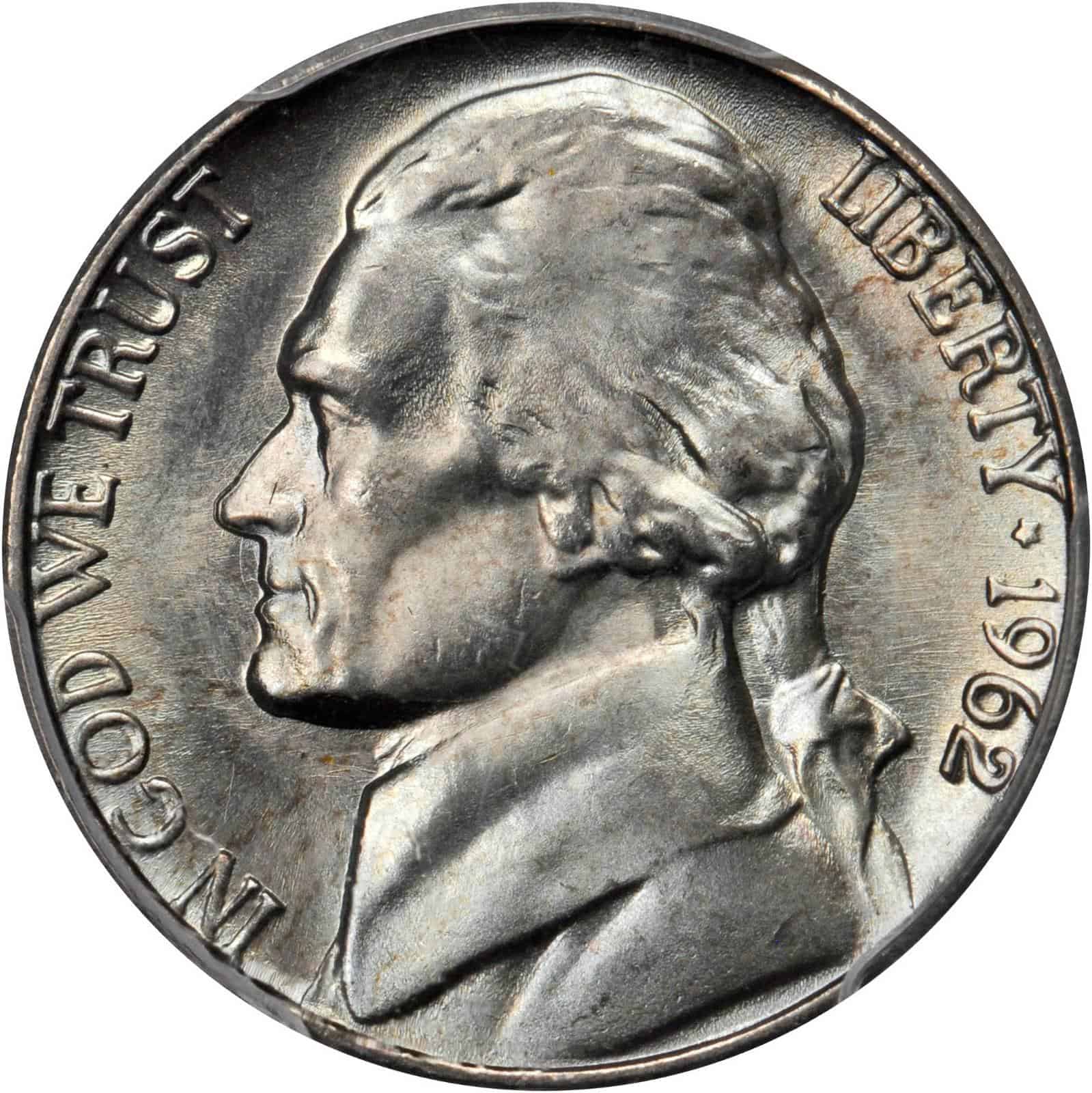 When looking at the nickel’s obverse, you can see a depiction of former President Thomas Jefferson’s left-facing bust in the central part. You can also notice the well-known fashion characteristics of that time, the high collar on his coat and his hair tied in a ponytail.

You can read the famous phrase IN GOD WE TRUST on the left coin rim. The word LIBERTY and the minting year are on the right rim.

The reverse of the 1962 Jefferson nickel 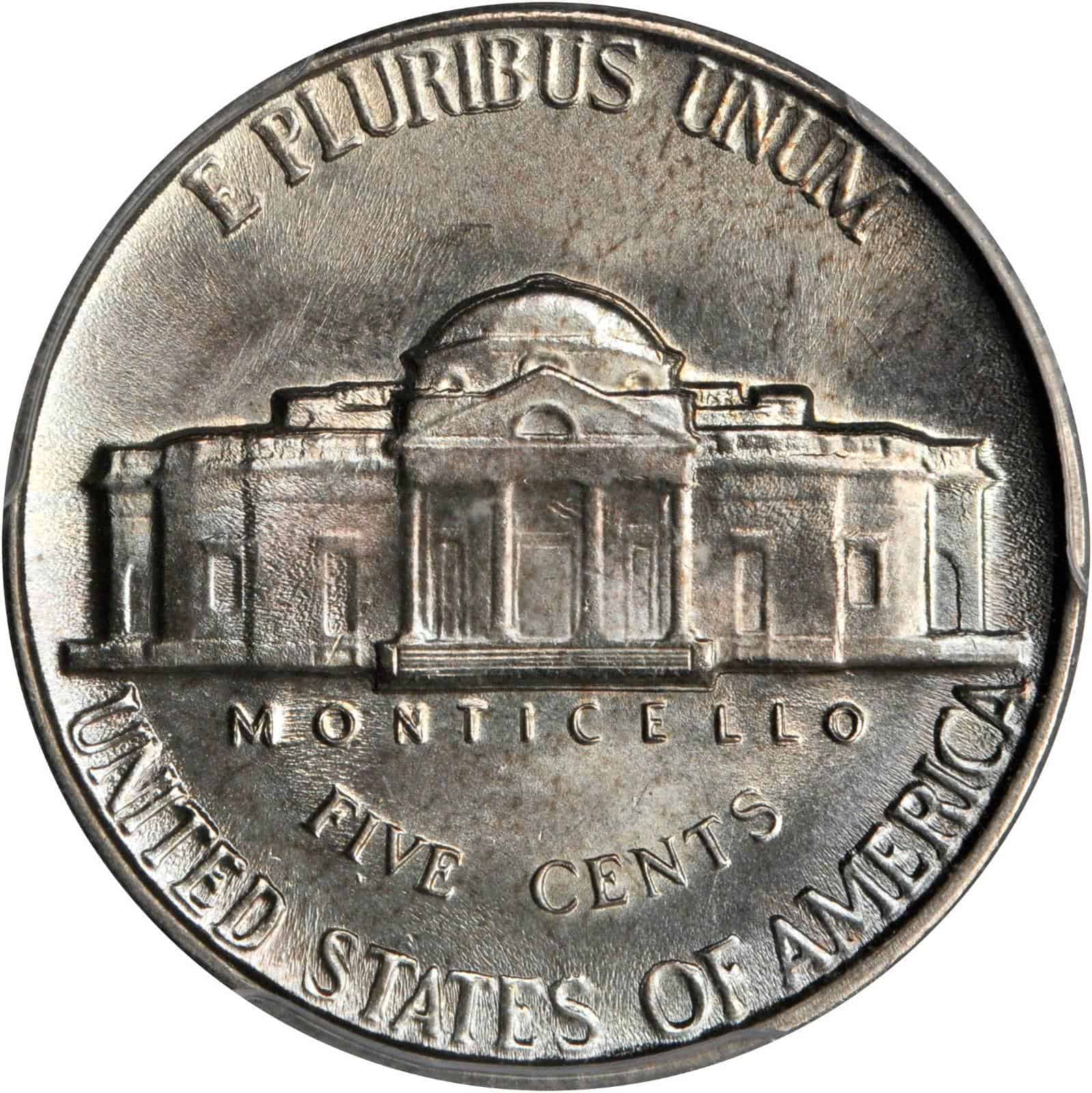 The monumental Monticello building occupies the central part of the reverse. A curiosity is that President Jefferson personally designed this mansion. In contrast to the simple obverse design, the building on the reverse is rich in many details.

The Latin phrase E PLURIBUS UNUM stretches along the upper rim, while on the lower rim is written the inscription UNITED STATES OF AMERICA. The building name, MONTICELLO, is struck directly below the steps and above the denomination FIVE CENTS.

Other features of the 1962 Jefferson nickel

The US Mint had the Jefferson nickel high-mintage in 1962. Three mints produced as many as 380,797,739 coins, and the Philadelphia mint struck both proof coins and regular specimens. With 97,384,000 Jefferson nickels minted, the Philadelphia mint had the second-largest mintage in 1962. These coins don’t have the mint mark on the reverse, which was the usual practice of this mint at that time.

These nickels’ abundant presence on the current coin market significantly affects their value. In most cases, you can buy a circulated coin in average condition for as little as five cents, which is also its face value. Even pieces in the mint state have an affordable value of about $10.

The prices these nickels typically reach at auctions can differ significantly. One collector purchased a 1962 MS 67+ Jefferson nickel with Full Steps for a surprising $21,150 in 2013. Another collector sold his regular 1962 MS 67 Jefferson nickel minted in Philadelphia for $690 in 2006.

This year, the Philadelphia mint minted proofs along with regularly struck nickels. The mintage of 3,218,019 coins was not exceptionally high, but it was quite ordinary for coins intended for collectors only.

Nowadays, the 1962 Jefferson proof nickels are readily available on the coin market. Therefore, their value is relatively low. It ranges from $0.25 to $675, depending on the coin state and cameo contrast grade.

Even the auction records don’t deviate much from these values, except for nickels with DCAM. The most costly specimen was the 1962 PR 69 Jefferson nickel with deep cameo contrast sold for $1,560 at the 2022 auction.

On the other hand, pieces with cameo contrast are less expensive, and one such piece only reached $550 on eBay in 2019. Ordinary coins are even cheaper, and the most valuable was the 1962 PR 67 Jefferson nickel that came to $400 on the open market in 2021. When you spot a D letter next to Monticello on the 1962 Jefferson nickel reverse, you will know that your coin is from the Denver mint. This mint had the largest mintage of 280,195,720 pieces in 1962.

Such a high circulation ensures the availability of these nickels on the coin market nowadays. Although coins from Denver have a slightly higher value than those from Philadelphia, their prices are still affordable.

In most cases, it is possible to find circulated nickels in average condition for as little as $0.5. On the other hand, those in the mint state are a bit more expensive and cost about $35.

The prices that 1962 nickels reach at auctions significantly vary. Thus, one collector paid $3,525 for the 1962 D MS 65 Jefferson nickel with Full Steps at an auction in 2020. On the other hand, the better-graded but regular Jefferson nickel from the same mint reached $2,995 on eBay in 2022.

With high mintages, mistakes are inevitable, no matter how hard the US Mint tries to avoid them. You can also find a highly collectible Full Steps Jefferson nickel variation, looking as a designer initially planned.

The Full Steps variation is characteristic of Jefferson nickels and indicates a strong die strike on the coin reverse. As you know, the reverse shows the Monticello building with steps at the entrance.

Typically, those steps are not clearly visible, so you can typically distinguish up to four. This irregularity happens when the strike is too weak, or the die is worn out. On the other hand, Full Steps specimens come with five or six clearly struck steps, making them desirable among collectors.

This feature significantly affects nickels’ value, so these coins’ price ranges between $12 and $4,000. It is necessary to take into account the mint mark, coin condition, and place of sale before estimation.

A doubled die error occurs when the die hits the coin surface two or three times. When looking at such a Jefferson nickel, you can see doublings on the obverse, reverse, or both sides.

In most cases, errors are on the obverse around Jefferson’s eye, mint year, and inscriptions. Errors on the reverse are most often visible on the words MONTICELLO and FIVE CENTS. These specimens’ value is about $50.

This error type has two variants, over-date and over-mintmark coins.

An old or damaged die could cause an error on the coin surface during minting. The resulting specimens with various cracks or bumps look unusual and are very collectible nowadays.

FAQ about the 1962 Jefferson Nickel

What makes a 1962 Jefferson nickel scarce?

The 1962 Jefferson nickel has no special features that make it a rare coin, but some types are hard to find in the mint state. So, pieces in the highest grades can be considered scarce in some way.

Which 1962 Jefferson nickel is worth a lot of money?

How much does the 1962 No Mint mark Jefferson nickel cost?

A significant mintage of the 1962 Jefferson nickel from the Philadelphia mint ensured its abundance on the coin market. Therefore, these coins’ value is not high and ranges from five cents to $11, depending on their condition.

What Jefferson nickel is the rarest nowadays?

As the Jefferson nickel production started in 1938, it is not easy to find these coins in the mint state nowadays. The rarest and the most expensive nickel came from the San Francisco mint. The 1954 S MS 67 Jefferson nickel was sold for an astonishing $35,250, making it the most valuable piece in the series.