In 1961, quarters were only minted in Philadelphia and Denver because the San Francisco Mint was closed from 1955 to 1964. Some coins were quietly minted from 1965 to 1967, but no coins had mint marks during that period because of the coin shortage, so it’s not obvious which ones were from San Francisco. But let’s review and analyze the 1961 Quarter Value.

History of the 1961 Quarter

The 1961 Quarter is a Washington Quarter with George Washington on the heads side. He was one of our Founding Fathers and became the 1st President of the United States. But he never wanted to be honored on a coin. Both he and Benjamin Franklin, another Founding Father, suggested that US coins should have symbolic depictions of Lady Liberty instead.

They felt that putting kings, queens, and presidents on coins was too colonial. So until 1909, no American leaders were put on circulating coins. That year, Abraham Lincoln became the first US President on a coin. The mint – and the public – used this gesture to celebrate the 100th anniversary of his birth. Then in 1932, they did the same with George Washington.

He’d been gone for over a century, so on the 200th Anniversary of his birth, he was honored on the Washington Quarter. It wasn’t his first time on US currency though, since we placed him on the $1 bill in 1869. He appeared on commemorative coins too. In 1900, he was on the Lafayette Dollar for the Paris World Fair, in an overlapping profile with George Lafayette.

American Leaders on US Coins

In 1926, he was on the Sesquicentennial Half Dollar, this time with Calvin Coolidge. So technically speaking, Coolidge is the only US President to appear on a US coin while he was alive and still in office. But Washington was only the second leader honored on a circulating coin. He was followed by Thomas Jefferson on the 1938 Nickel and FDR on the 1946 Dime.

But the Secretary of the Treasury decided to go with a different profile by John Flanagan, which was used from 1932 to 2021, with slight adjustments by William Cousins from 1999 onward. Here’s another oddity – when the Washington coin was introduced, they only meant to mint it for one year because President Herbert Hoover was concerned about counterfeits.

The Commemorative Coin Bill of 1930

President Hoover had previously been the Secretary of Commerce, so he had strong opinions about federal expenditure. He felt the US had too many commemorative coins that weren’t selling much, and that this celebratory currency was mere crook fodder, so he vetoed the bill. The George Washington Bicentennial Committee offered Hoover a workable compromise.

They would make the Washington Half Dollar a circulation coin instead of a commemorative one, and they would only mint it for a year. No Half Dollars had been coined since 1930, and none were planned until 1933. But Congress didn’t like the Standing Liberty Quarter, so they pushed to replace it with a suitable Washington Quarter that would be permanently minted.

As a side note, Laura Gardin Fraser was the wife and former student of James Earle Fraser, who designed the Buffalo Nickel. She was an established artist in her own right, with lots of medals, coins, and monuments under her belt. But she designed the Oregon Trail Memorial Half Dollar in 1926, and it wasn’t selling well. This may have biased the Treasury Secretary.

While both the public and the mint loved the Washington Quarter, and the heads side was used until 2021, it wasn’t immune to tweaking. The motto, In God We Trust, had changed three times by 1936. And at least six more versions of that heads side were made by 1964, followed by additional modifications for the 5o States Quarters in 1999 and again in 2010.

Features of the 1961 Quarter

When you’re researching the physical features of any coin, you’ll come across certain terms, so let’s go over a few of them. The heads side of a coin is called the obverse and the tails side is called the reverse. The words on a coin are legends or mottos, and the images are called devices. The background is known as the field, and the blank discs are known as planchets.

Planchets come to the mint as a coiled sheet that gets flattened and fed into a blanking machine that punches them into discs. If the planchet isn’t fully flattened, it might curl as it’s being struck, which causes a fold-over error. The sheets that are left over after punching are full of holes. These can sometimes break into fragments that accidentally get into the press.

The Obverse of the 1961 Quarter 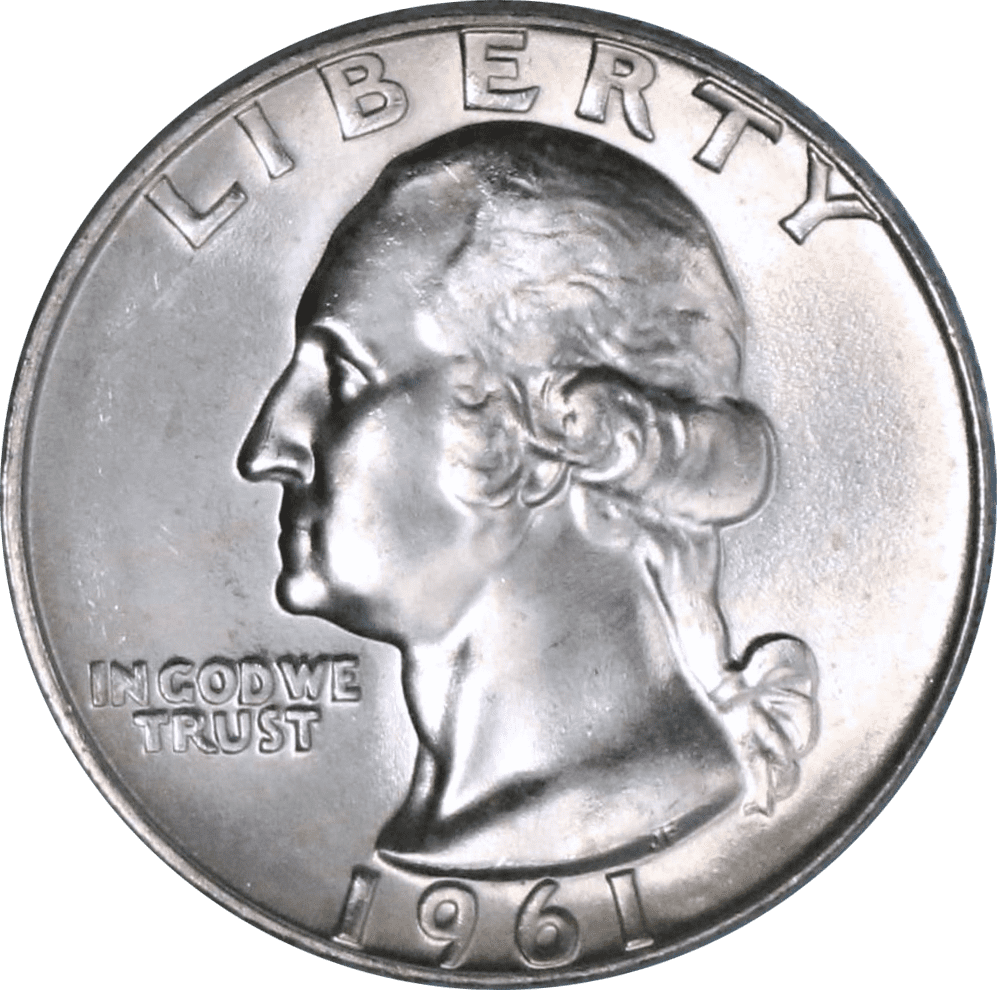 The obverse (heads side) of the 1961 Quarter has a profile of George Washington facing left. The legend Liberty is above his head and the motto In God We Trust is on the left next to his Adam’s apple. The mint date is at the bottom of the coin below his neck, and the designer’s initials, JF for John Flanagan, are engraved on the lower right side of his neckline cut-off.

The Reverse of the 1961 Quarter 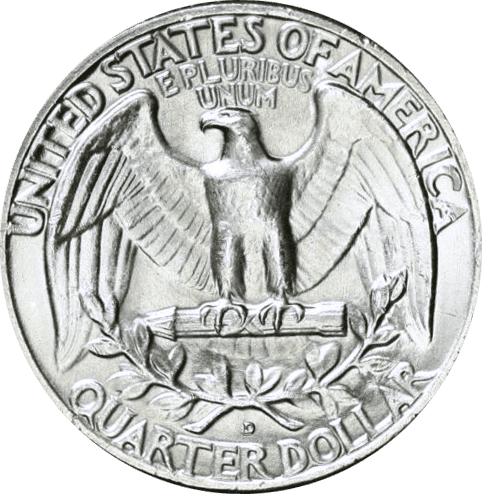 The reverse (tails side) of the 1961 Quarter features an eagle with its wings spread. It has a bundle of arrows in its talons and a pair of olive branches beneath its feet. The mint mark is under the central point between the branches. The top of the coin reads United States of America with E Pluribus Unum just below that. The bottom of the coin reads Quarter Dollar.

Other Features of the 1961 Quarter

The 1961 Quarter is 90% silver and 10% copper. It’s 24.3mm in diameter, 1.75mm thick, and weighs 6.25g with a reeded edge. The coin was designed through a contest, and though Laura Gardin Fraser won, the Treasury Secretary, Andrew W. Mellon, opted for Flanagan’s portrait instead. Laura Gardin Fraser’s design was later used on the 2022 American Women Quarter.

The mint mark identifies which branch of the US Mint made a particular coin, and that can sometimes influence the resale value of the coin, so let’s analyze these quarters mint by mint.

On some 1961 Philadelphia Quarters, the reverse was struck using old proof dies so they have more space between the E and the S in States, creating a separate coin variety. On regular strike dies, the E and S are almost touching. In December 2021, a Type B Reverse graded MS 67 was $8,519. PCGS has only graded one. They estimate the value of an MS 67+ as $9,000. 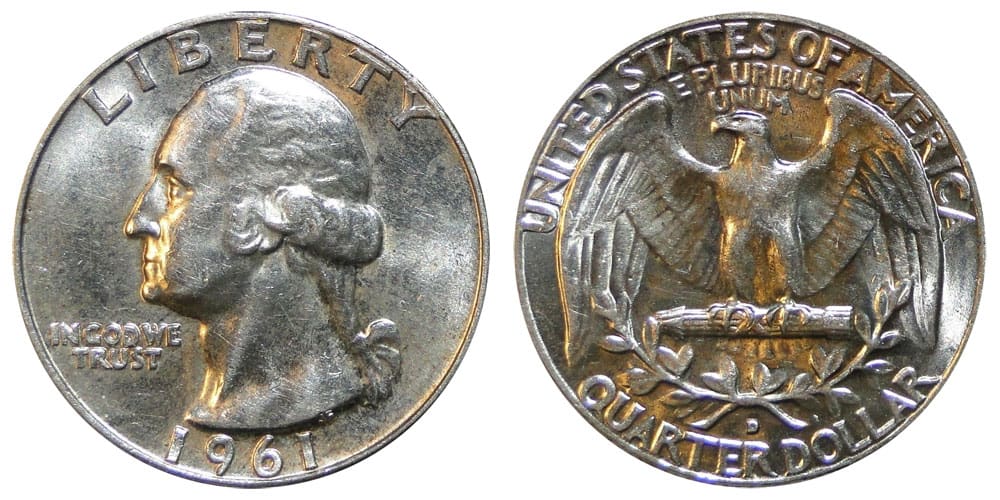 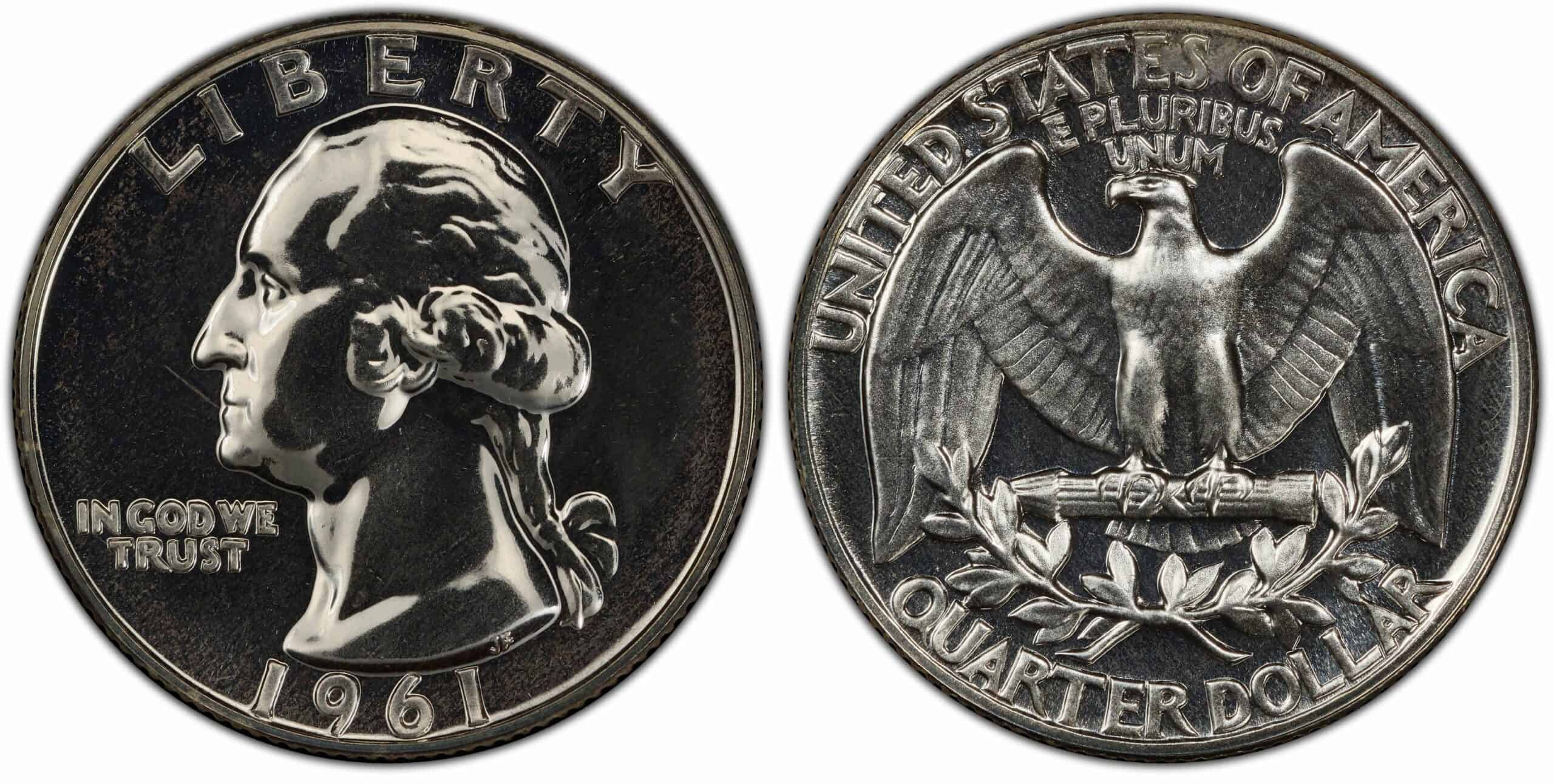 Before coins can be minted, the die has to be tested to ensure its details are accurate. Proof coins are used for this, and a few copies are kept in the archives while the rest are sold to collectors. Proof coins can be mirror-like, matte, or reversed. Matte proofs are sandblasted so they have a grainy matte appearance. They’re packed in sulfur-infused tissue paper.

The sulfur-laced packaging prevents tarnish but can sometimes cause toning. Mirrored proofs have a mirror-like field and a frosted device while Reverse Proofs have a mirrored device and a frosted field. Planchets are burnished before punching to create that distinctive shine. They’re polished by tumbling them in vats full of stainless steel balls and rinsing them.

Proof dies are also polished with horsehair brushes for extra shine. As for the frosted parts of the coin, they were pickled in acid until 1970 when a newer technique was developed using computerized lasers. In this latter method, the frosting stayed consistent on all coin batches. But on acid-washed coins, only the first 50 to 100 were fully frosted before it started to fade.

These first coins are graded Deep Cameo (DCAM) by PCGS or Ultra Cameo by NGC. The grade below that is Cameo, followed by regular proofs. Non-proof coins are known as regular strikes, business strikes, or circulation strikes, and some of the best ones have a sparkly satin finish. These are often hand-picked from coin batches and sold as Uncirculated PDS Sets.

Errors can happen at various stages of the minting process, and some can be quite valuable. More than 20 errors are known, and they each have a premium, depending on the condition of the coin. Usually, an artist makes an 8” model out of epoxy, plaster, and rubber, then hands it to the mint. The mint uses a reducing machine to resize the coin into a steel hub.

This master hub makes a master die, which makes a working hub, and that makes working dies. Mint marks are added to the working die. Until 1990, this was done using a hand-punch so any wobbling could cause re-punched mint marks (RPM). Coins that were moved between mints might get an over-punched mint mark (OMM) so maybe a D was punched over an S.

Or you might get a misplaced mint mark (MPM) if the mint mark was placed on the wrong spot. If the planchet moves between die strikes, you might get an off-center error. If part of the collar mold falls off, you can get a broadstrike, since collars are made with 3 detachable pieces. And sometimes, a coin is pressed on a planchet designed for another denomination.

DDO stands for doubled-die error. It’s when the die changes position between hub strikes so the second strike lands at a different spot. This doubling is then transferred to every coin the doubled die mints, causing a variety. Thousands might be coined before the mint corrects it. In 2018, a PR 67 was $384 and a PR 67 DCAM was $576. But a PR 66 CAM was $84 in 2022. 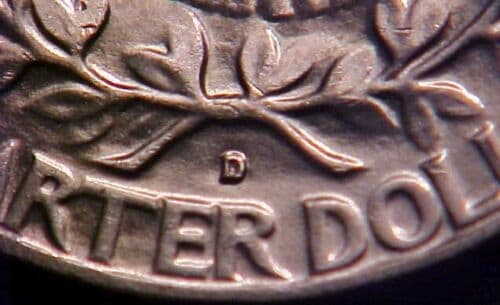 RPM means re-punched mint mark. This is a doubling error that happens if the hand-punch shifts while placing the second or third mint mark. It’s written as D/D which reads as D over D. And it’s a First Strike error or FS, meaning it was spotted within the first month of its initial release. In August 2014, an MS 64 was $500. The current MS 65 estimate is $1,150.

The blanking machine punches planchets into different disc sizes based on the intended coin denomination. And sometimes, a coin is struck on the wrong planchet size. In this case, the quarter was struck on a planchet intended for a 5c coin, so the coin weighs less (only 5g instead of 6.25g). It seems truncated and even in AU 50, the coin sold for more than $280.

This is similar to the error above, but this time, the quarter was struck on a planchet that was intended for a 1-cent coin. Since most pennies are copper-colored (except for the steelies of 1943 and 1944), this quarter has a red hue. It only weighs 3.07g instead of 6.25g, and since pennies are a bit smaller, part of the wording got sliced off. In MS 64, it sold for over $1,300.

Both NGC and PCGS use grading systems based on the Sheldon Scale, but their lettering is sometimes different. Proofs are PR for PCGS and PF for NGC. And Extremely Fine coins (40 and 45) are EF for PCGS and XF for NGC. This damaged coin was struck on a 1-cent planchet and graded XF details by NGC. But even in this ruined condition, the coin sold for over $160.

Sometimes, a foreign object can sneak between the die and the planchet during minting. This contaminant might get stuck onto the coin, or it may leave a silhouette to show its presence. This is called struck thru or strike-through error. On this coin, the strike-through happened on the tails side of the coin, blurring its lower portion. In MS 62, the coin sold for over $50.

FAQs About the 1961 Quarter

Is There Anything Special About the 1961 Quarter?

Yes. The 1961 Regular Strike Quarter has a Type A and a Type B reverse. On Type B’s, the mint used older proof dies, so there’s a little more space between the E and S in States.