Lincoln pennies are coins with a long history. In addition to being the lowest denomination of American coinage, this coin is enjoyable for collectors. It has experienced several changes in its appearance over the years.

The new design featured the Lincoln Memorial on the reverse, making this penny the first with the changed reverse in a series. Unfortunately, that doesn’t affect its price, and the 1959 penny value is pretty low. You can find valuable pieces, but it primarily depends on their condition, mint mark, and possible errors.

History of the 1959 Lincoln Penny

For most Americans, 1959 was an exciting year because Alaska and Hawaii became the 49th and 50th states and a part of the US. Besides, Americans celebrated Lincoln’s 150th birthday that year, while the US Mint commemorated 50 years of the first Lincoln penny minting.

The idea was to create the new Lincoln Memorial coin to replace the Wheat penny in honor of the anniversary. While the coin obverse remains the same, engraver Frank Gasparro designed the reverse with the Lincoln Memorial in the center.

Interestingly, the 16th President appears twice on the same coin. You can see his profile on the obverse and his tiny statue inside the building depicted on the reverse.

The new cent minting started in 1959 and lasted until 2008, making it the most recognizable American coin worldwide. Since the law forbids their melting, many old pieces are still in circulation, including those produced in 1959.

However, it has become hard to find those coins these days because people tend to save them due to the high copper value. They are a sure investment since copper is worth twice the penny’s face value.

On the other hand, using these pieces for artistic purposes and DIY projects is legal, so many people use Lincoln pennies instead of pricey copper to make jewelry and souvenirs.

Features of the 1959 Lincoln penny

As I have already mentioned, 1959 was a specific year for Americans. One of the events was the Memorial that appeared on the coin reverse for the first time that year.

It replaced two wheat stalks after 50 years to honor the respectful President’s 150th anniversary birthday. Two mints in Philadelphia and Denver produced 1,890,624,291 pieces, which was a significant number even for this coin type.

The obverse of the 1959 Lincoln penny 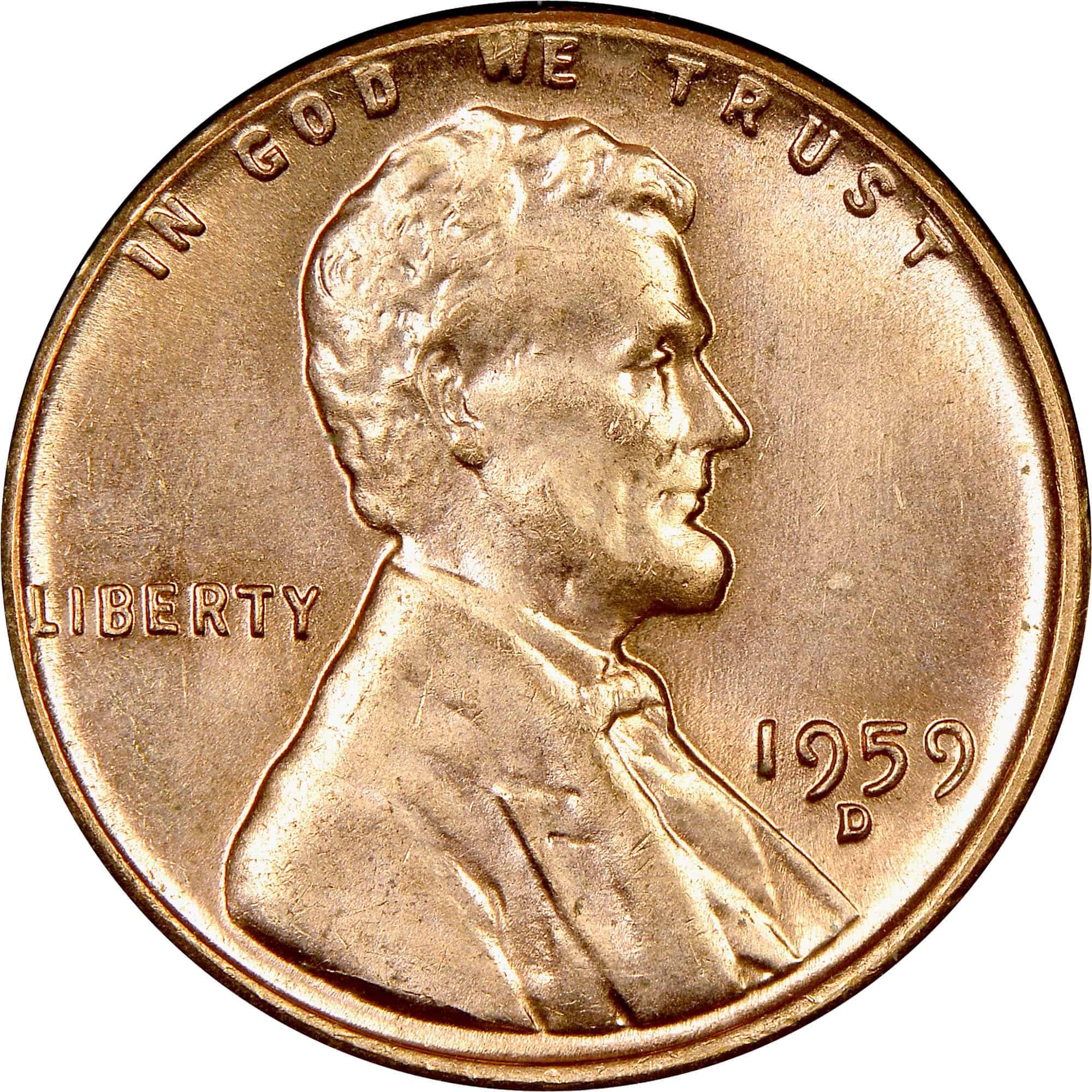 The 1959 Lincoln penny retained its familiar appearance from the previous series. Victor Brenner created it based on Mathew Brady’s photo featuring the former US President’s profile.

You can see Lincoln wearing a coat over his shirt with an elegant bow tie instead of a classic tie. You can quickly recognize his right profile with a beard on his face, and it makes sense that no one wanted to replace this obverse.

As usual, the minting year is in front of Lincoln’s profile. The mint mark is struck on coins from the Denver mint, while these from Philadelphia have that spot blank. On the left is the word LIBERTY, while the American phrase IN GOD WE TRUST is struck along the coin’s top edge, above Lincoln’s head.

The reverse of the 1959 Lincoln penny 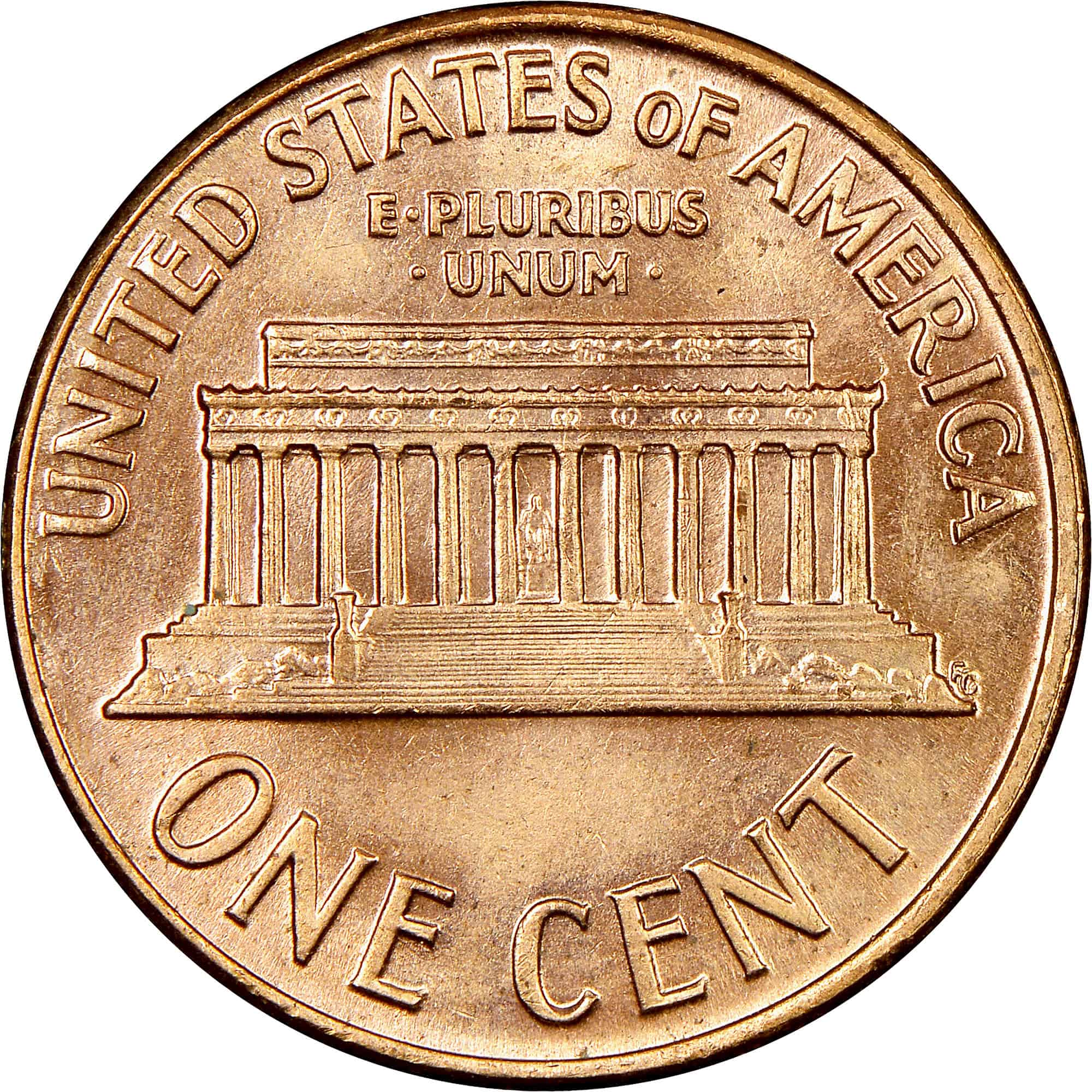 As I have already mentioned, Lincoln pennies minted in 1959 got a new reverse design, and this redesigned look was in keeping with the celebration. The author of this change was Frank Gasparro, employed as an engraver’s assistant in the Philadelphia mint at that time.

Gasparro chose the imposing marble Lincoln Memorial erected in Washington, DC, as a motive for the new reverse. As you probably know, the monument was based on architect Henry Bacon’s idea.

The Memorial structure is unique in American culture and resembles an ancient Greek temple, thanks to twelve Doric pillars. Interestingly, all are visible in this coin, and you can also notice the Abraham Lincoln statue between the central ones.

The inscription UNITED STATES OF AMERICA struck on the upper rim surrounds the monument. The famous Latin saying E PLURIBUS UNUM is placed between them.

Below the Lincoln Memorial is the ONE CENT denomination written in capital letters. The designer added his initials next to the stairs in front of the Memorial entrance.

Other features of the 1959 Lincoln penny

Two mints in Philadelphia and Denver started producing the Lincoln penny with a redesigned reverse in 1959. The final score was 1,890,624,291 pieces struck this particular year. 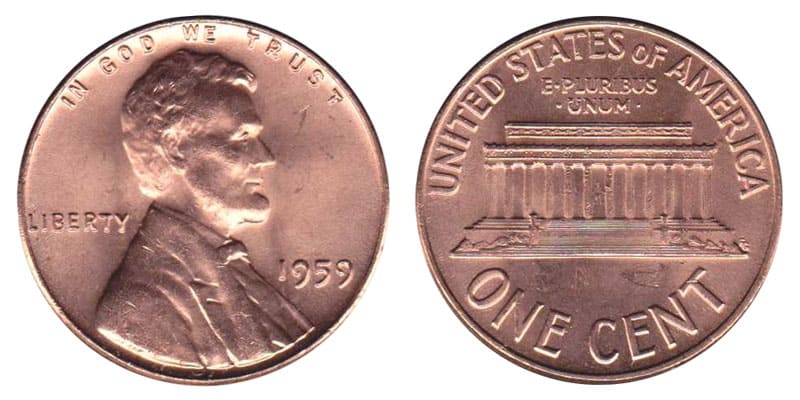 The Philadelphia mint produced 609,715,000 Lincoln pennies without the mint mark in 1959. Such a high number means that their average value is typically low.

Most pennies never exceed their nominal value, but the final price can vary due to the copper price. You can get two cents per piece on the current raw material market.

However, some coins can reach significantly higher prices, depending on their condition. For instance, the 1959 MS 66 Lincoln penny with less desirable red-brown was paid $638 on eBay in 2020.

On the other hand, the most valuable memorial coin struck in Philadelphia from the regular strike is a piece with beautiful red toning. One collector paid an impressive $5,887 for this 1959 MS 67+ Lincoln penny in 2016.

The brown 1959 Lincoln penny was also sold at Heritage Auctions, but its value was expectedly lower because of its color. One collector set aside $1,880 for this MS 65 rating specimen in 2017. 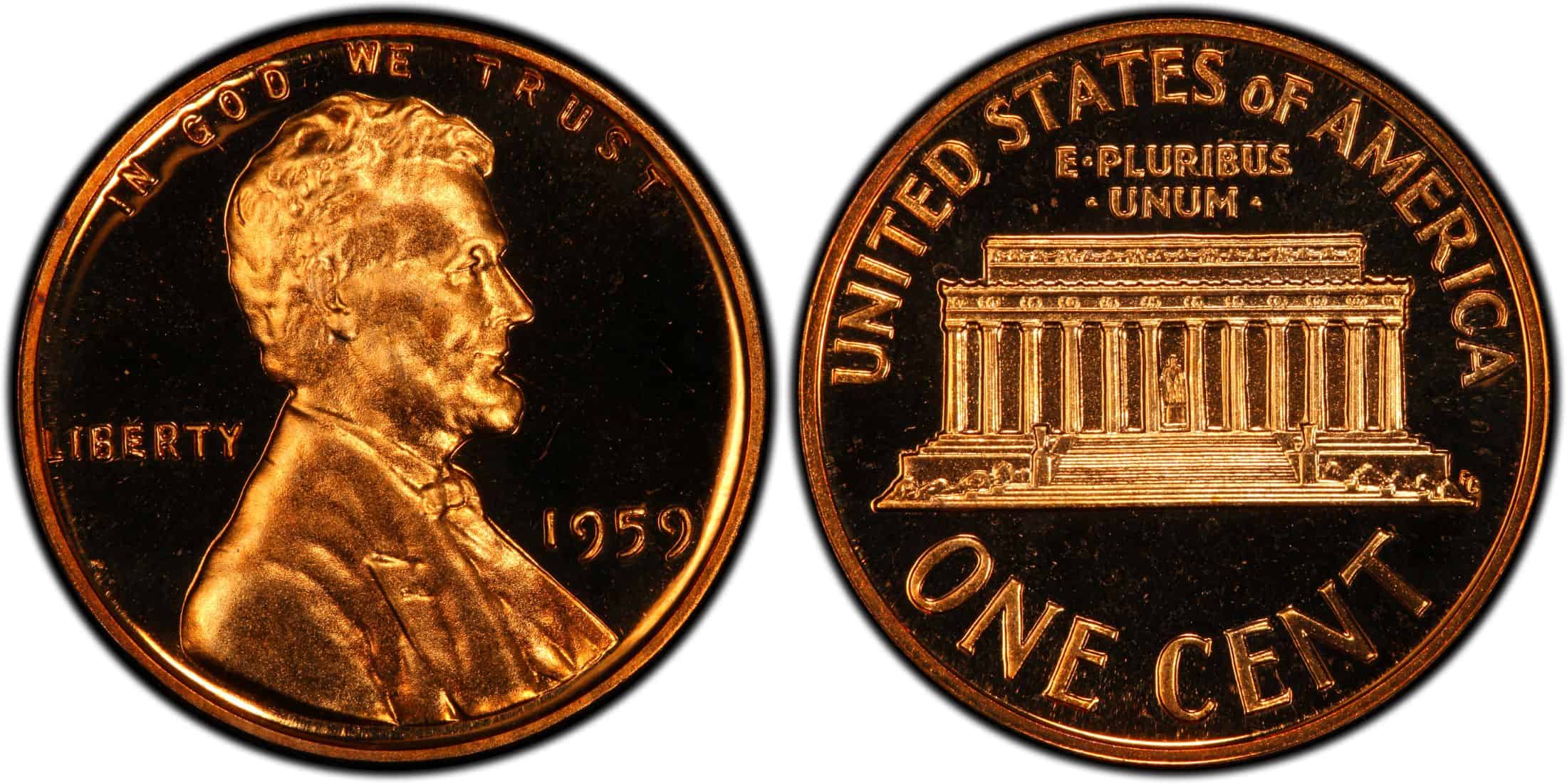 Besides the regular strike, the Philadelphia mint produced 1,149,291 proof nickels in 1959. This number makes them available on the coin market, and their value is not such significant. The preservation level and color combination ensure that your penny is worth only 60 cents or $200.

Nevertheless, some specimens fetch extraordinary sums at auctions. Thus, one collector became the owner of the 1959 proof Lincoln penny graded PR 69 for $20,700 in 2004. Likewise, another piece in the same grade brought its owner a respectful $4,313 in 2009. 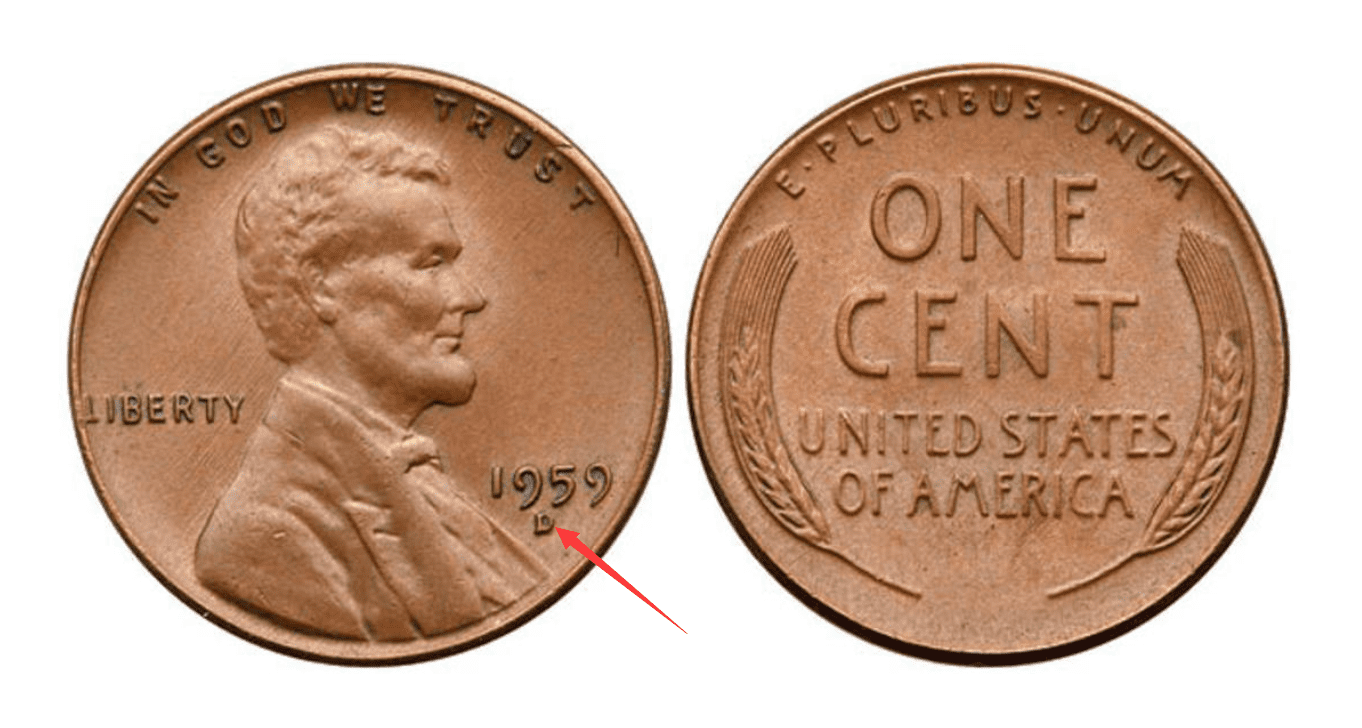 The Denver mint struck 1,279,760,000 Lincoln pennies that year. These coins are easily distinguished from those minted in Philadelphia by the D mint mark on the obverse. Due to the large circulation, its value is pretty low. You can buy one for a sum that varies between one and 62 cents, depending on its condition.

So far, the highest price ever paid for one brown Lincoln Memorial penny struck in the Denver mint in 1959 was $48,300. This humble coin changed hands for this incredible sum at the Goldberg Auctioneers auction in 2003.

The other coin from Denver, the 1959 D MS 68 Lincoln penny with beautiful red toning, was sold for $6,999 in 2021. It was a surprisingly low price, considering its incredible color, sharply struck details, and high grade, when you compare it with the brown specimen.

The possible explanation was that the owner offered this regular strike specimen on eBay instead at one of the reputable auctions. Finally, the 1959 D RB Lincoln penny in an MS 66 grade was sold in 2020 for a modest $115 on eBay.

Various errors can appear on the pennies’ surfaces during the minting process. Some can be hardly visible and therefore don’t bring significant premiums. On the other hand, coins with large errors usually rarely leave the mint because they are easier to spot, making these pieces rare.

As I have already mentioned, a new design that included the Lincoln Memorial replaced the previous reverse with wheat ears in 1959. However, the 1959 D Lincoln Mule Memorial penny is the only specimen found with wheat ears on its reverse.

Leon Baller, a retired police officer, announced in 1986 that he bought this coin for $1,500. Since not even one such piece appeared in all these years, it was difficult to confirm its authenticity. The following year, Baller sought an opinion from the US Treasury Department stating that the coin was genuine.

During the following years, this penny received neither a certificate of authenticity nor a grade, although Baller approached numerous grading companies, including PCGS.

Still, Baller managed to sell the 1959 D Mule Lincoln penny at an auction. After the purchase, the new owner again sought the Ministry of Finance’s opinion. The Ministry’s response stated that no tests found evidence that the coin was fake. In the end, this penny remains the most controversial coin among collectors.

FAQ about the 1959 Lincoln Penny

What makes a 1959 Lincoln penny unique?

The 1959 Lincoln penny is the first one-cent coin to feature the Lincoln Memorial on the reverse. Likewise, it is specific because Abraham Lincoln appears on both coin sides. You can see his bust on the obverse and his small statue between pillars on the reverse.

Which 1959 Lincoln penny is worth a lot of money (according to PCSG)?

How much is the 1959 No Mint mark Lincoln penny worth?

In most cases, you can sell the 1959 Lincoln Memorial penny for two cents, thanks to the high copper price on the stock market. However, its value can increase significantly for uncirculated specimens or rare coins with an error.

Otherwise, the uncirculated 1959 Lincoln penny without the mint mark is worth about 25 to 50 cents. In most cases, the value of coins minted in Denver is typically the same. The most expensive are proofs with a slightly higher value of $2+.

What is the rarest 1959 Lincoln penny?

The 1959 Lincoln penny mintage is so high that it is undoubtedly one of the most common pennies in circulation. For this reason, no specimen can be considered rare except for the controversial Lincoln Mule Memorial penny error.