The nickel minted in 1958 is one of the series known as Jefferson nickels. It’s an interesting coin – but is it valuable?

That’s what we’re going to find out! We’re going to explore the 1958 nickel value, its history and design. And we’ll learn about some of the interesting error coins that are out there too.

Ready to find out more? Step this way!

The nickel minted in 1958 is known as a Jefferson nickel. The series takes its name from Thomas Jefferson, whose image appears on the obverse.

It was launched in 1938, when it replaced the coin popularly known as the “Buffalo nickel”. That had proved difficult to strike successfully, and it was replaced at the earliest opportunity.

Despite the name, not all Jefferson nickels are actually made of nickel. The Second World War led to changes in the coin’s composition, as metals were needed for the war effort. From 1942 to 1945, nickels were made of an alloy of copper, silver and manganese.

In the early years of production, Jefferson nickels were struck at Philadelphia, San Francisco and Denver. But the San Francisco mint ceased production from 1954 to 1963. So you won’t find an “S” mint mark amongst the 1958 nickels.

Proof coins were struck beginning in 1950 and continued to be made until 1964. They were all produced at the Mint facility in Philadelphia.

Jefferson nickels are still being made today. The portrait of the former president that appears on the obverse was changed in 2005, and again in 2006. The current version was designed by Franki and is based on an image of Jefferson by Rembrandt Peale, created in 1800.

Features of the 1958 Nickel

The Obverse of the 1958 Nickel 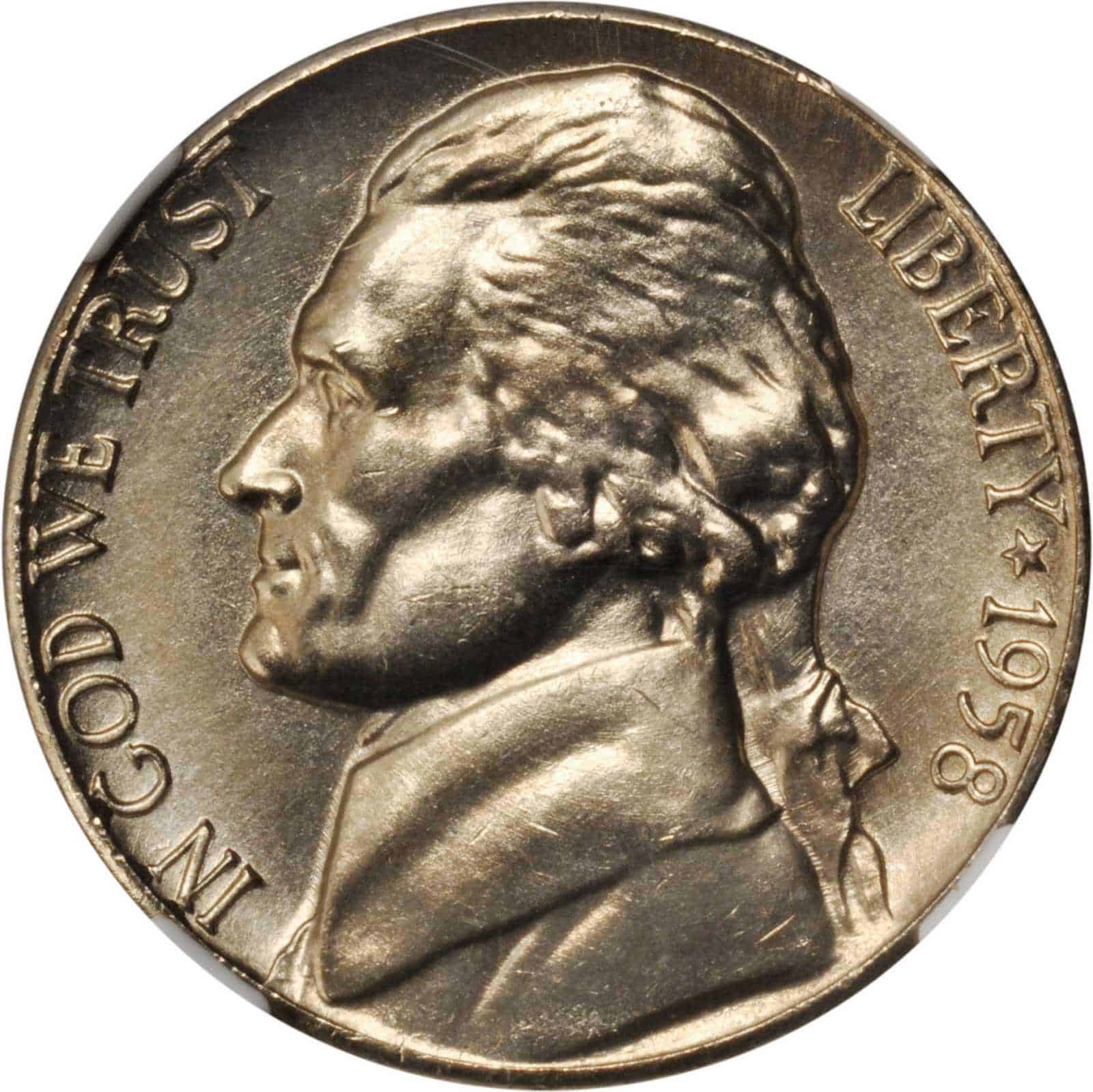 The obverse is coin collectors’ term for the “heads” side of the coin. In the case of the 1958 nickel, that carries the image of the former president, Thomas Jefferson.

Jefferson is shown in profile facing left, his lips upturned in a faint smile. The portrait was the work of a German artist named Felix Schlag, who won the design competition for the new coin.

His bust of Jefferson closely resembles a sculpture by the French artist Jean-Antoine Houdon. You can still see the original bust today at Boston’s Museum of Fine Arts. (Houdon’s statue of George Washington also served as the basis for the portrait of Washington on the US quarter.)

To the left of Jefferson, and following the left-hand curve of the coin edge, are the words “In God We Trust”. To the right, running along the right-hand edge is the word “Liberty”, separated by a star from the date.

The Reverse of the 1958 Nickel 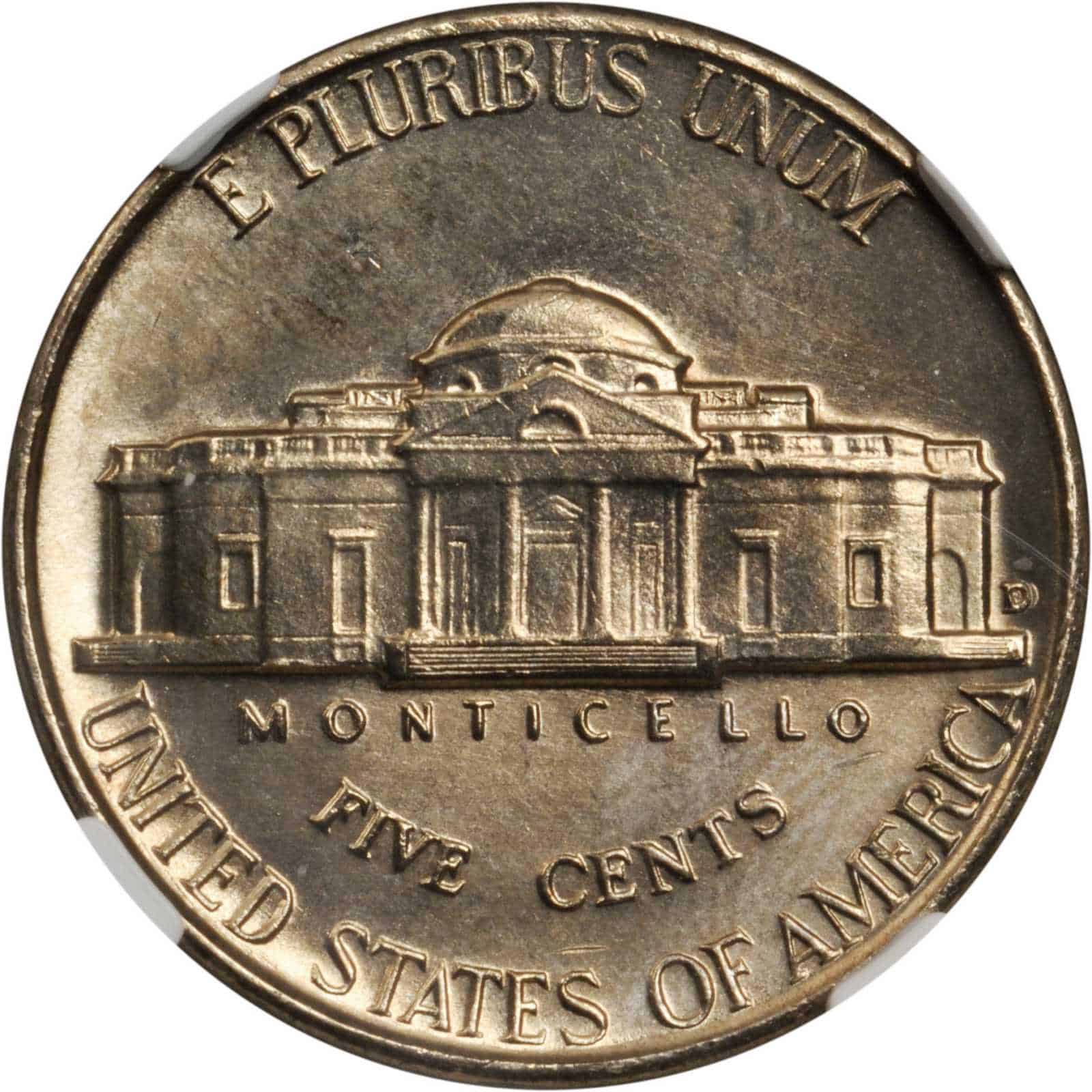 The reverse – or “tails” side – of the nickel shows Washington’s home, Monticello. But it is quite different from the image that had originally been prepared by Felix Schlag.

That had showed the building three-quarters on, complete with a nearby tree. But Mint officials did not approve. They incorrectly identified the tree as a palm, complaining that Jefferson could not have grown such a thing in his time. And they asked that the building be shown straight on instead.

The revised design was not, in the view of many art historians, as successful as the original. It was certainly less clear where it actually was. The legend “Monticello” was added to the design to eliminate confusion.

Above the image, the Latin motto “E pluribus unum” curves along the top edge of the coin. That means “From the many, one” and is a reference to the creation of the USA from the individual states.

“Monticello” is written on the horizontal below the building, while the denomination and country name are below that. These both follow the curve of the lower coin edge.

Mint officials weren’t happy with Schlag’s lettering either. They asked that the modern script originally submitted be changed. They felt it was not “in keeping” – though what it was supposed to be in keeping with wasn’t specified. Schlag modified the font to a Romanesque typeface.

If your 1958 nickel was struck in Philadelphia, it won’t have a mint mark. But if it was struck in Denver, there’ll be a small “D” on the reverse. Look for it to the right of the image of Monticello, next to the coin edge and towards the bottom of the wall.

Other Features of the 1958 Nickel

1958 nickels are actually made of 75 per cent copper and 25 per cent nickel. The copper is at the core and coated in nickel to give it its silver color.

The coin measures 21.2 millimeters in diamer, weighs 5 grams, and has a plain edge.

The business strikes – i.e. those intended for circulation – are divided into two categories. There are regular nickels and those designated as “full steps”, often shortened to “FS” in coin catalogs.

This Youtube video from CoinHELPu looks at a number of graded examples of Jefferson nickels. It will help you decide if it’s worth the expense of getting your own coin graded. And it includes a look at what constitutes a full steps designation. 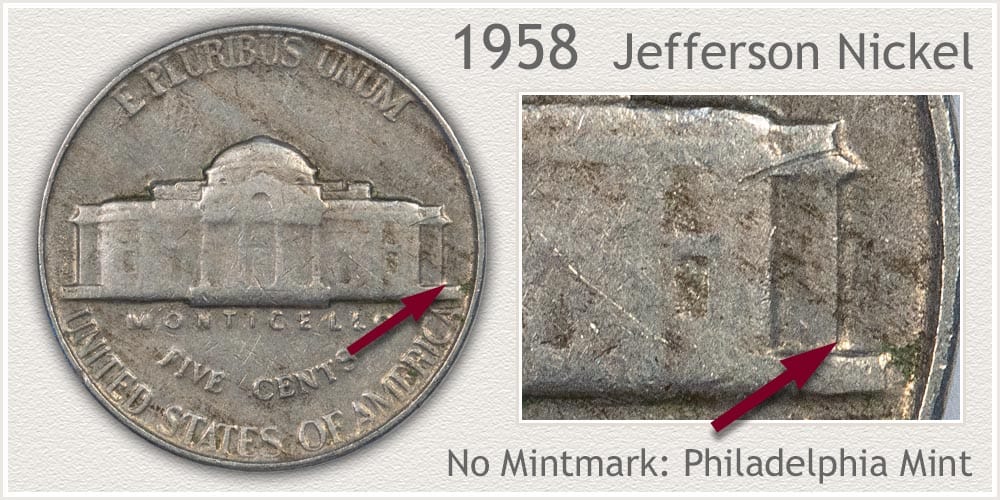 Over 17 million nickels were produced in the Philadelphia Mint facility in 1958. That might sound like a lot – but it’s dwarfed by the number struck in Denver. (We’ll talk more about those later.) That means that at higher grades, Philadelphia coins carry a small premium over their Denver counterparts.

You can tell them apart by the presence of a mint mark. A Philadelphia penny won’t have one. But if you look on the reverse of a penny struck in Denver, you’ll see a small upper case “D” towards the right-hand coin edge.

The value depends on the quality and condition of the coin. The better the condition, the rarer and more valuable it will be.

The two basic categories of condition are circulated and uncirculated coins. Circulated 1958 Jefferson nickels generally aren’t worth any more than their face value. (The exceptions to this are error coins, and we’ll look at those later too.)

But if you have a coin in uncirculated condition, it’s considerably more desirable to collectors. These coins are known as “mint state” or “proof” coins. Mint state coins have the prefix “MS”, while proof coins are prefixed “PR”.

A mint state 1958 nickel from Philadelphia is valued at around $2 at MS60. So even in nice condition, it’s not going to make you a fortune. The value rises to $25 at MS65, the lowest level at which a coin is referred to as a “gem”. And at MS66, the value increases again to $38.

The auction record for a coin without the full steps designation went to one graded MS66+. That was sold in 2017 and made $588, including the buyer’s premium. 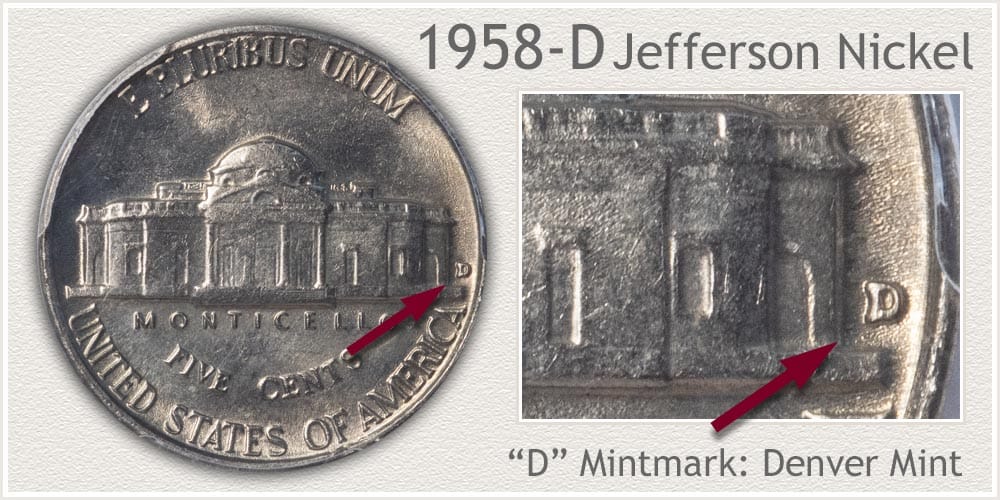 The Denver mint facility was kept very busy striking nickels in 1958. It produced over 168 million of them.

Like the Philadelphia nickels, those from Denver are divided into regular and full steps designations. Circulated coins aren’t worth more than a nickel. But uncirculated examples are harder to find and more valuable.

That’s because MS67 is the highest available grade for coins that aren’t designated full steps. But there are full steps coins that have been graded MS67+ by the PCGS. Those have the cachet of being “best in class”, and are worth around $2,000. 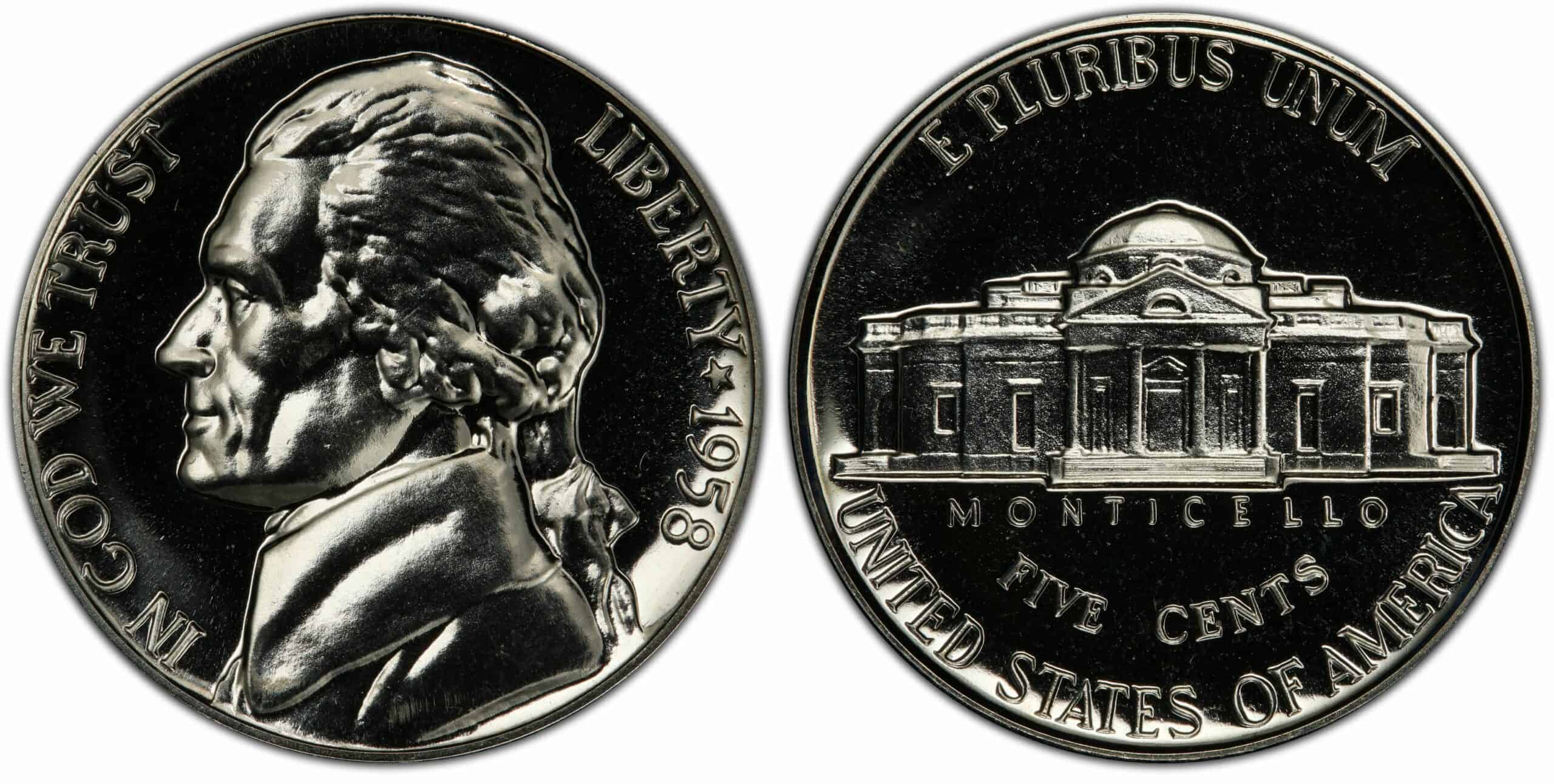 In addition to business strikes, the Philadelphia mint facility produced over 856,000 proof nickels in 1958. These were targeted at collectors, and were struck using specially prepared dies on hand-selected planchets.

They were always considered collectors’ items, though. So while they’re attractive coins, they were carefully stored and are consequently less scarce than you might expect.

Values range from just $5 for a standard proof graded PR60, up to $185 at PR69. But some proofs are designated “cameos” or “deep cameos”, and these command a premium.

Cameo coins have an attractive contrast between reflective fields (the flat parts of the coin) and frosted devices (the raised parts of the design). Deep cameos have a particularly strong contrast.

One such coin was a 1958 nickel minted in Denver. It was struck twice, with the second strike being 85 per cent off-center. It was graded by the NGC at MS63. And when it was presented for sale at auction, it fetched $180. 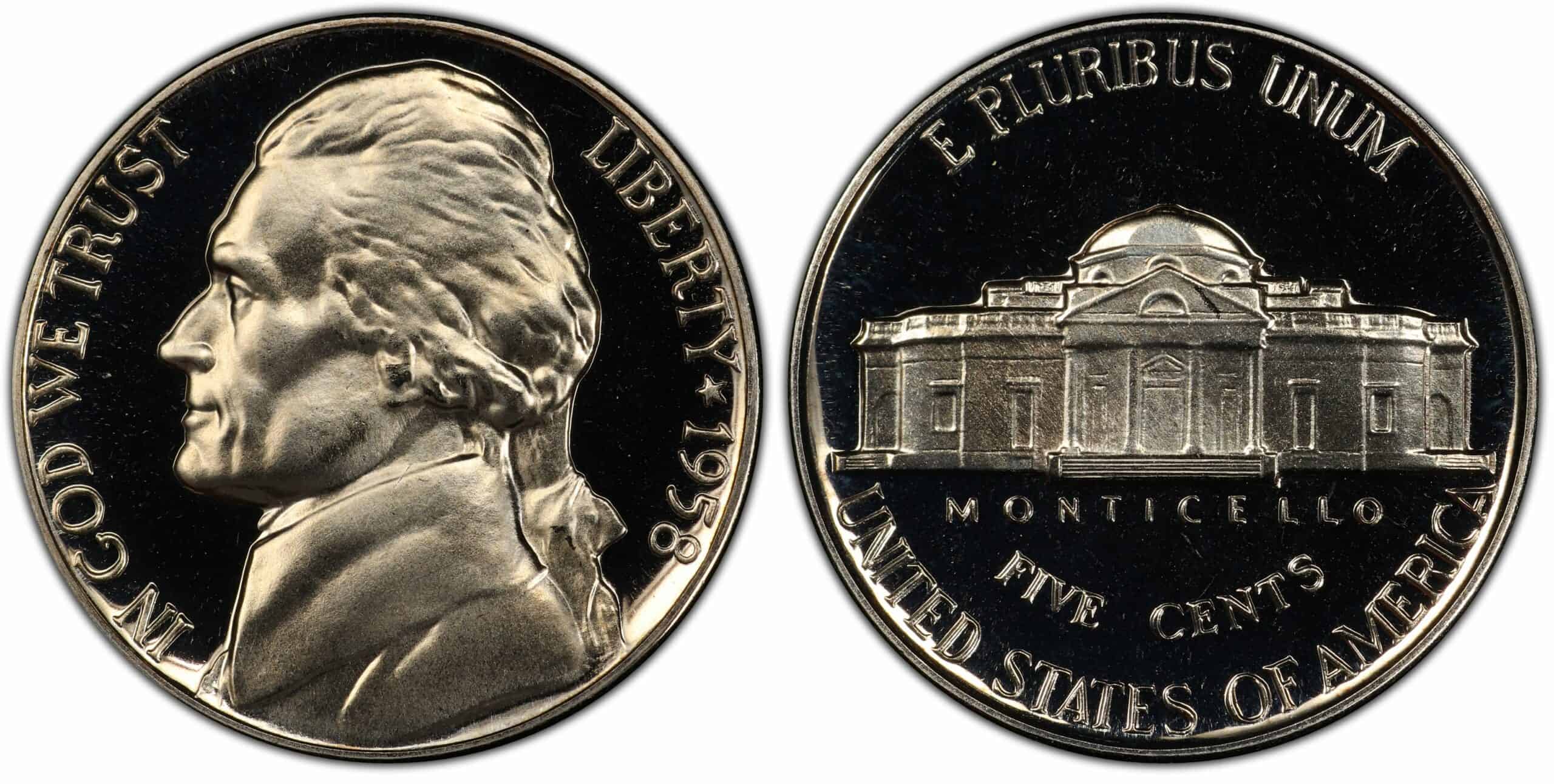 The proof nickels struck in Philadelphia in 1958 include a number of examples of “double die” errors. These occur during the manufacture of the dies used to strike the coins.

These have to be struck multiple times to capture all the details of the design. And if they move between strikes, the result is a double image. That’s then transferred to the coins struck by the die.

Examples of this kind of error are less rare, and the value depends on the coin quality. One example, graded PF65 by ANACS, sold at auction for $20.

Sometimes coins aren’t positioned properly when they’re struck. As a result, the strike is off-center, leaving a blank area of the planchet.

One such coin was a 1958 Denver nickel graded MS65 by the NGC. The strike here was a dramatic 75 per cent off-center. And it sold at auction for $370.

1958 Nickels Struck on the Wrong Planchet

A number of the nickels minted in Philadelphia in 1958 somehow found their way onto the wrong planchets. Examples include:

Take a look at this YouTube video from Couch Collectibles for more examples of 1958 error nickels.

No. They have a copper core that’s coated in nickel to give them a silver appearance. The exact composition is 75 per cent copper and 25 per cent silver.

Some of the nickels minted from 1942 to 1945 did contain 35 per cent silver, together with copper and manganese.

What nickel is worth a million dollars?

The 1913 Liberty Head nickel is one of the rarest coins in American numismatic history. The Liberty Head nickels were supposed to have stopped being minted in 1912. But someone minted five of them in 1913. Two were in a museum, and another two were in the hands of private collectors.

One Paul Montgomery, a New Hampshire coin collector, posted a million dollar reward for the fifth coin. It was successfully claimed by the family of George Walton, a deceased coin collector.