The penny minted in 1957 is known as the Wheat penny. If you’ve found one amongst your pocket change, you may be wondering if it’s worth holding onto.

We’re going to investigate the 1957 Wheat penny value. We’ll find out about its design and interesting features. And we’ll learn what separates a rare coin from a standard example.

History of the 1957 Wheat Penny

It takes its name from the design on the reverse, two ears of durum wheat. The coins were first minted back in 1909, and the final Wheat penny was struck in 1958.

The launch of the Wheat penny the first time a real person had been depicted on a US coin. Until then, the “heads”, or obverse, side of the coins had depicted Liberty in various poses.

That changed in 1909, the bicentenary of the birth of Abraham Lincoln. There was strong public support for a coin bearing the image of the former president.

In 1957, pennies were being made from 95 per cent copper again. The remaining 5 per cent was a mixture of tin and zinc.

The final wheat penny was struck in 1958. 1959 marked 150 years since Lincoln’s birth, and a new design was commissioned to mark the milestone. The ears of wheat were replaced on the reverse with an image of the Lincoln Memorial in Washington DC.

Features of the 1957 Wheat Penny

The Obverse of the 1957 Wheat Penny 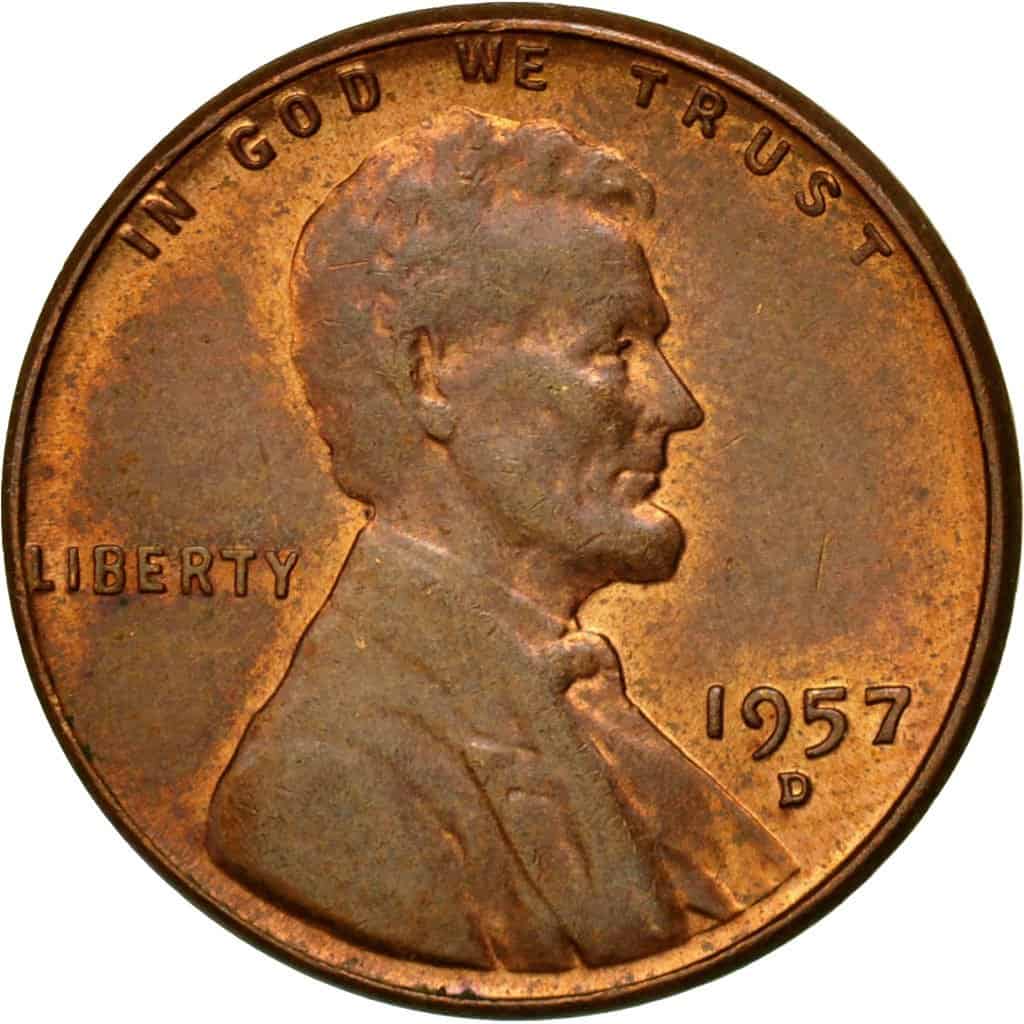 The obverse of the 1957 Wheat penny is very familiar. It carries the same head and shoulders portrait of Abraham Lincoln that’s appeared on every cent since 1909.

The former president is shown in profile facing right. The artist, Victor David Brenner, said that he had imagined Lincoln as he would have looked when reading to children. The image is believed to have been based on a photograph taken at the studio of Matthew Brady.

The first Wheat pennies weren’t without controversy. Brenner had originally planned to add his signature to the portrait, but was told this wouldn’t be acceptable. So instead, he offered to replace it with his initials, which he would place on the reverse of the coin.

Even this, though, was the subject of debate. Some felt that the initials were too big, and that they constituted “advertising”. So in the face of the artist’s objections, they were removed altogether.

Brenner’s initials were finally reinstated in 1918. They were placed at the lower edge of Lincoln’s shoulder.

The words “In God We Trust” are inscribed above the bust. The word “Liberty” is to its left and the date is on the right. If the coin was minted in Denver, there’ll be a “D” just below the date.

The Reverse of the 1957 Wheat Penny 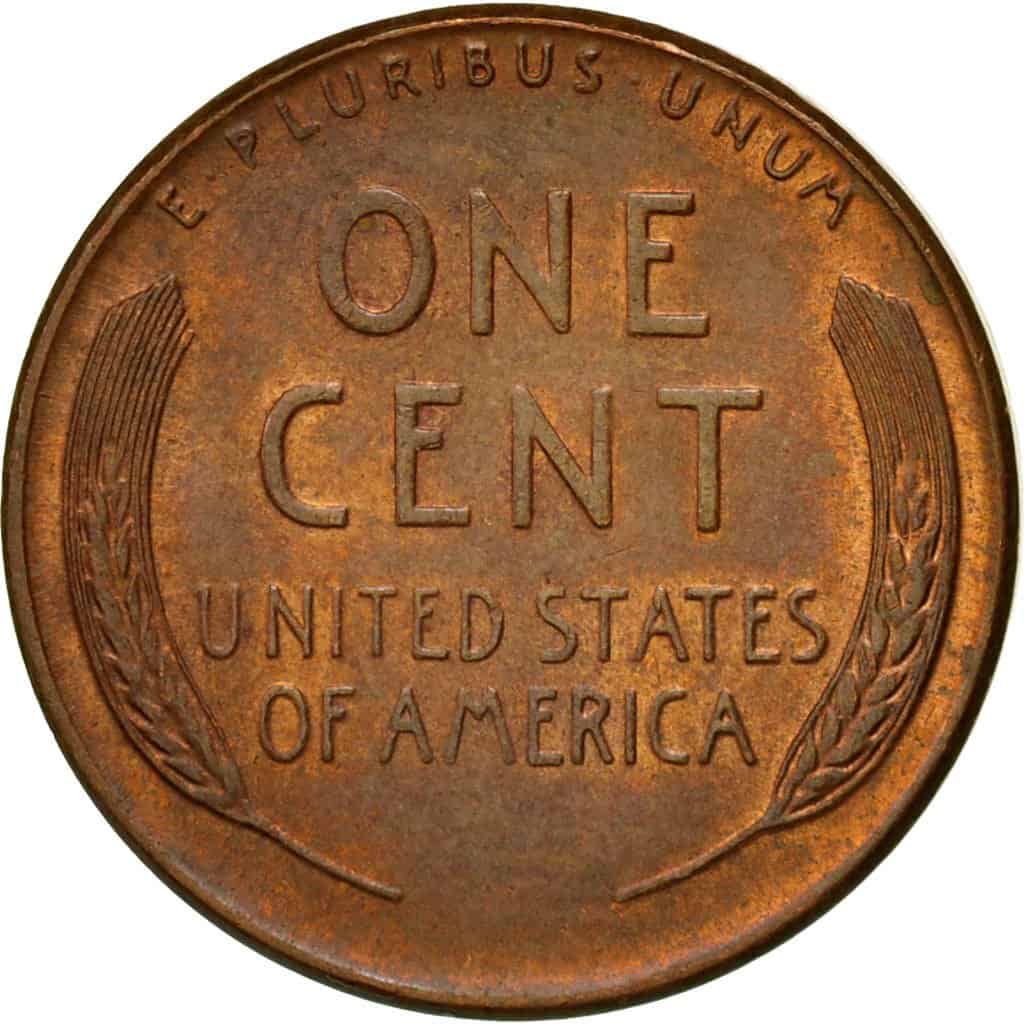 Turn your 1957 penny over, and you’ll see the ears of durum wheat which give it its nickname. Brenner produced the design for this side of the coin too. But what you see here wasn’t his original image.

That had featured a tree branch. It was a design that was very similar to French coins being produced at the same time.

The Mint Director, Frank A. Leach, didn’t confront Brenner about the borrowed design. But he sent him back to the drawing board, asking for a simple image. The two ears of wheat were the result.

The denomination curves along the bottom edge of the reverse. At the top, also following the curve of the coin edge, is the Latin motto “E pluribus unum”. This means “From the many, one” and is a reference to the creation of the country from the individual states.

The denomination is inscribed in large letters in the middle, between the ears of wheat. The country name is fitted over two lines below it.

Other Features of the 1957 Wheat Penny

The 1957 Wheat penny measures exactly 19 millimeters in diameter and has a plain edge. It’s made of 95 per cent copper and weighs 3.11 grams.

The copper means that the color of the coins changes over time. They start off red. And as the metal is handled and exposed to oxygen in the air, they become brown. That means that Wheat pennies can be divided into three different color groupings.

Coins that are still at least 95 per cent red across their total surface area (both sides) are graded “red”. That’s often abbreviated to “RD” in coin catalogs.

If the coin is at least 95 per cent brown across its total surface, it’s graded “brown”, with the abbreviation “BN”.

And if the color is anywhere between those two extremes, it’s graded “red and brown”. The abbreviation for that is RB.

A coin of the same grade will generally be worth more if it’s graded red and brown than if it’s brown. And a red coin will be more valuable again.

To find out more about grading the color of Lincoln pennies, check out this YouTube video from CoinOpp. You can spot a Philadelphia penny because there won’t be a mint mark (a letter) under the date.

Over 282 million regular pennies were struck at Philadelphia in 1957. That might sound like a lot. But it’s only just over a quarter of the number struck in Denver. So does that mean that a 1957 penny without a mint mark is valuable?

Sadly no – or at least, not unless it satisfies other criteria too. With 282 million coins produced, it’s not difficult to find them today. So unless your coin is in uncirculated condition – known as “mint state” (MS) – it’s unlikely to be worth more than about 5 cents.

But red pennies in uncirculated grades can be more valuable. A 1957 Philadelphia penny graded MS63 (out of a maximum of 70) is worth about $7. And the better the condition, the higher that value will climb.

The finest examples known to exist are graded MS67+ by the PCGS. There are four coins at that level, valued at $14,000 a pop. The Denver mint facility struck well over a billion pennies in 1957. So just as with Philadelphia pennies, they won’t be worth more than about 5 cents unless they have an interesting error.

Values for even mint state coins are modest. They mirror their Philadelphia counterparts at MS63 and MS65. But with more coins available at the higher grades, prices don’t climb as steeply from there.

A 1957 non-error brown Denver Wheat penny was sold at auction in April 2022. It was graded MS66 and had attractive toning on both sides. It sold for over $100. 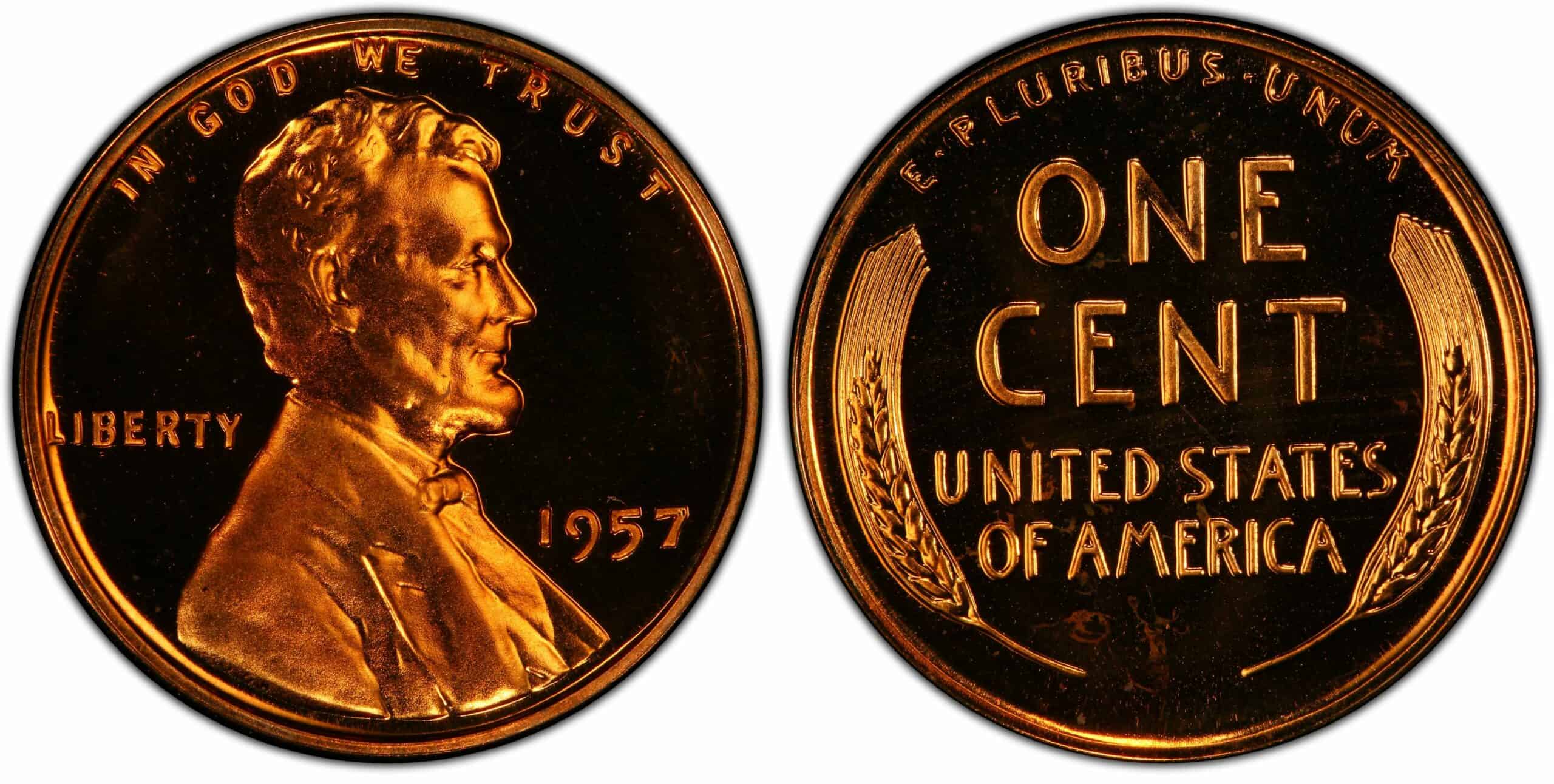 In addition to pennies for circulation, the Philadelphia mint facility struck almost 1.25 million proof pennies in 1957. These were made using special dies and highly polished planchets. They were aimed at collectors, and almost 1.25 million of them were minted.

1957 proof pennies come in four different categories: proofs, red proofs, cameos and deep cameos. Standard proofs generally aren’t worth very much, even at high grades. Proofs designated red are worth more – $27 at PR65, rising to between $100 and $150 at MS69.

A cameo coin is one that has an attractive contrast between reflective fields and frosting on the high parts of the design. With a deep cameo, that contrast is stronger.

Cameos are more desirable than red proofs. The premium is relatively small until the highest grades. At PR65, a 1957 cameo proof penny is worth about $35 compared to $26 for a red non-cameo proof. The premium at PR68, though, is much higher – $700 compared to $110.

And for deep cameos, the value is higher again. A 1957 deep cameo proof penny graded PR65 is valued at $475 by the PCGS. The finest known examples are two coins graded PR68, and they’re each valued at a whopping $32,500. 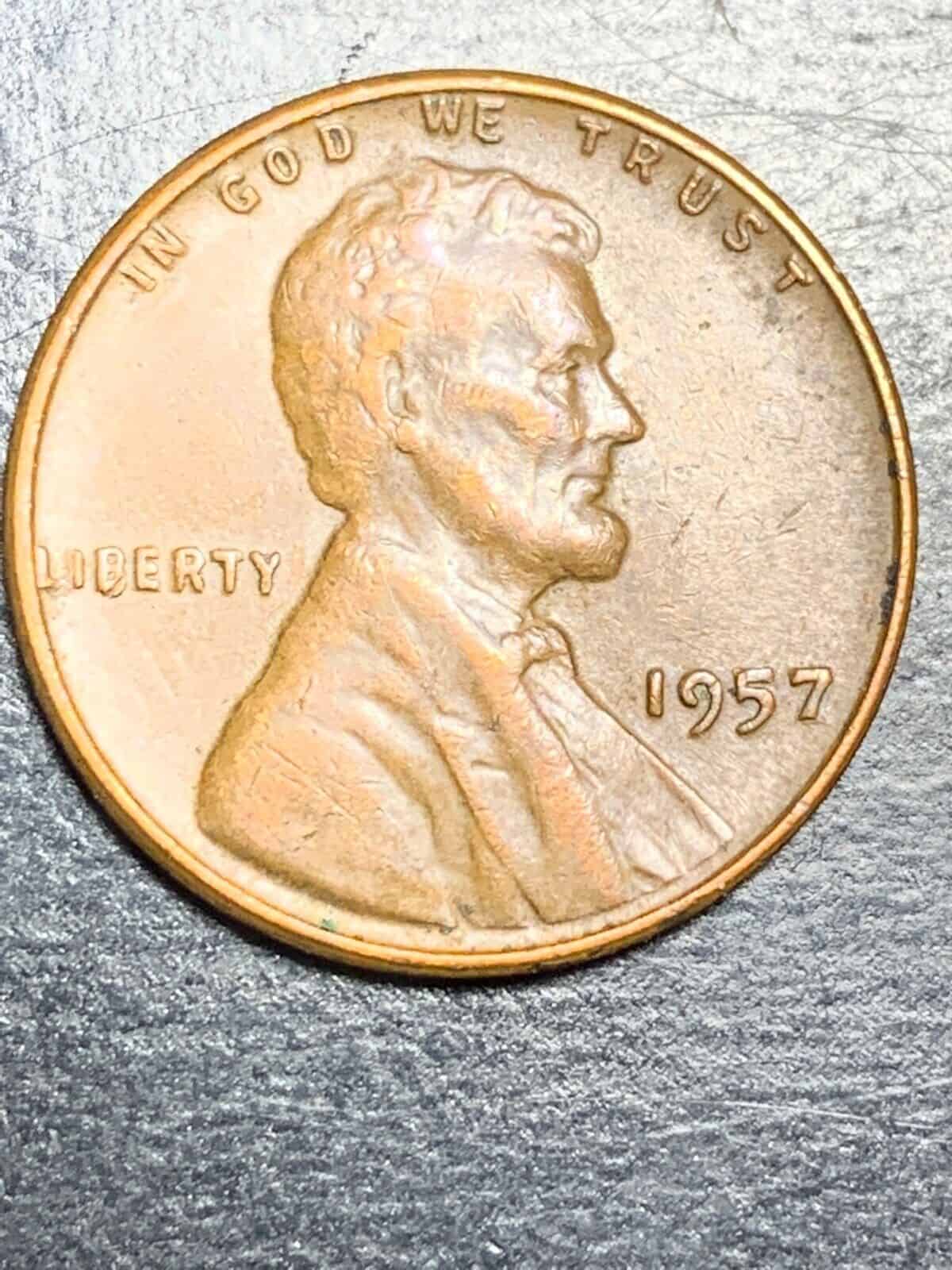 A double die error is one that’s made during production of the die used to strike the coins. The die has to be struck multiple times to capture all the design details. And if it moves during that process, a double image is created. That’s then transferred to the coins the die strikes.

Other double die obverses show thicker digits in the date. And there’s a distortion on the top and bottom left edges of the “I”, “B” ad “E” of “Liberty”. With this error, they’re on a diagonal instead of straight. A coin graded AU53 with this error will be worth about $4, rising to $7.50 at MS63, and $15 at MS65.

And other double die obverse errors feature doubling on Lincoln’s eyelid, and on the letters of both “Liberty” and “God”.

Sometimes, coins can combine more than one error. That was the case for a 1957 Wheat penny that was struck 10 per cent off center. About a third of the planchet had also been clipped off.

It was graded MS65 by the PCGS and designated brown. And it sold at auction for $240.

Another type of error occasionally made by the Mint is a lamination error. This is when the surface of the planchet cracks or flakes.

One 1957 penny had this error on its obverse, with the lamination affecting part of Lincoln’s hair and ear. It was graded MS63 brown by the PCGS, and sold at auction for $110.

Some of the 1957 Denver Wheat pennies had their mintmarks repunched. You can see the ghost of the first “D” beneath the second.

One of the rarest kinds of Mint errors are those where coins are struck on the wrong planchet. That was the case for one 1957 Wheat penny, which was struck on a planchet intended for a dime.

This YouTube video from Treasure Town takes you through a range of 1957 penny errors.

Most 1957 Wheat pennies aren’t rare. But red coins in excellent condition are more difficult to find. And there are a range of error coins that are rarer than regular strikes too.

There are a wide range of errors amongst 1957 pennies. They include a number of different double die obverse errors. You may find evidence of doubling on the letters of “Liberty” or “God”, on the date, or on Lincoln’s eyelid. You’ll need a microscope or loupe to spot it.