Three mints produced the collectible and highly recognizable 1955 Lincoln cent, like many similar minted from 1909 to 1958. All those are famous for President Lincoln’s profile on the obverse and two wheat stalks on the reverse.

The 1955 Wheat penny value depends on the condition and mint mark. As expected, experienced collectors want to buy a famous and rare double-die error struck this year. At the same time, beginners start with a basic collection that always includes three specimens from the regular strike.

History of the 1955 Lincoln Wheat Penny

Lincoln wheat pennies are famous American coins minted from 1909 to 1958 when the US Mint changed their reverse for the first time. Engraver and sculptor Victor D. Brenner designed this lovely piece, and the obverse is a rare example in the US coinage that lasts so long.

It was the first regular-issue American coin with an actual person on the obverse. The precedent was set in honor of Lincoln’s birth centennial, and then it became common practice despite the initial resistance from traditionalists.

Americans adored the new cent from the first day, and the controversy over the portrait quickly disappeared. Since the average mintage was high from the very beginning, these coins are typically abundant on the market, with a few exceptions.

The 1955 Lincoln wheat penny is a highly recognizable coin in the series, thanks to the famous doubled die on the obverse. No one is sure about their share in the Philadelphia mintage of 330,580,000 pieces struck that year.

However, calculations say that up to 24,000 pieces could be struck, and about 15,000 still exist. In any case, three things are for sure. These pennies are the most well-known error variety among collectors. Besides, they are rare and can be very expensive.

Unfortunately, you can also find practically worthless Poor Man’s Doubled Dies resulting from minor mechanical doubling. Be careful, and never mix them with the real thing!

The 1955 Lincoln penny is a part of the most recognizable American coinage. Plus, collectors particularly appreciate pieces struck in the Philadelphia mint this year because of a highly collectible error.

The obverse of the 1955 Lincoln wheat penny 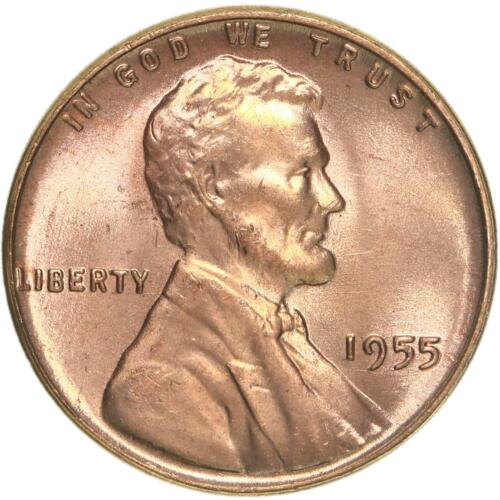 The 1955 Lincoln wheat penny contains Abraham Lincoln’s image facing right in the central position on the obverse. The simple design includes the word LIBERTY near the left coin rim and the inscription IN GOD WE TRUST above the 16th US President’s head.

In front of his bust are the date and appropriate mint mark, depending on the mint producing the particular coin. Those from Philadelphia always come without the mint mark. Finally, you can notice VDB letters on the bust’s shoulder truncation, representing the designer’s initials.

The reverse of the 1955 Lincoln wheat penny 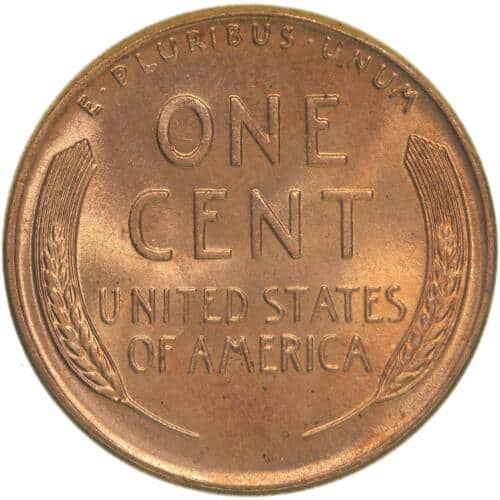 Like other Lincoln wheat pennies, those minted in 1955 come with a subtle design that includes two wheat ears stretching along the rim.

They surround the denomination written in sizable fonts, while the inscription UNITED STATES OF AMERICA was divided into two lines. The tiny Latin motto, E PLURIBUS UNUM, is placed along the top edge.

Other features of the 1955 Lincoln wheat penny

A composition that includes 95% copper with the remaining percentage of tin or zinc is typical for all Lincoln pennies produced from 1944 to 1982, including those minted in 1955. 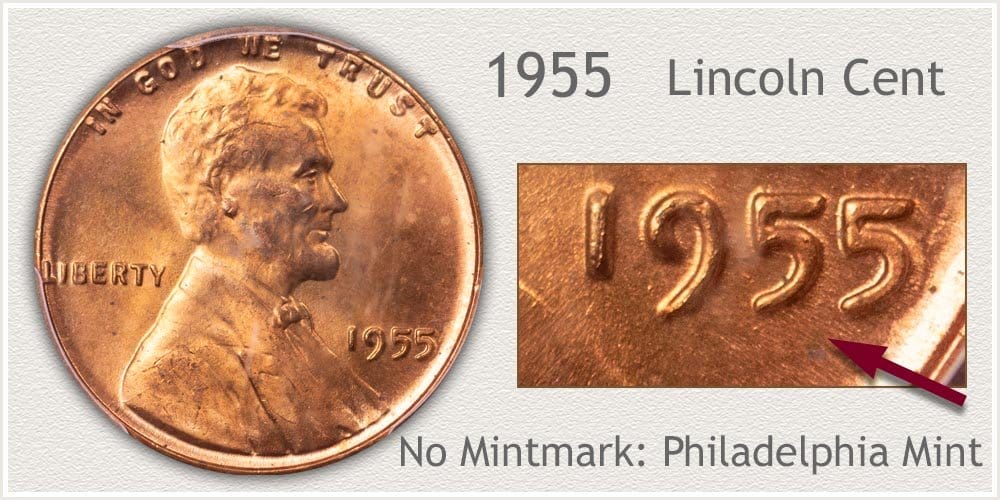 The 1955 Lincoln wheat penny’s price depends on its condition and color. Thanks to a low value, pieces in circulated condition are not collectible, so the only thing you should consider is the perfection level.

You can buy most coins in the highest grade for a few cents to $10, while beautiful pieces with desirable red toning can reach $35. Even the best specimen will cost you up to $700. The most expensive penny produced in Philadelphia this year was paid $8,625 at an auction in 2006. 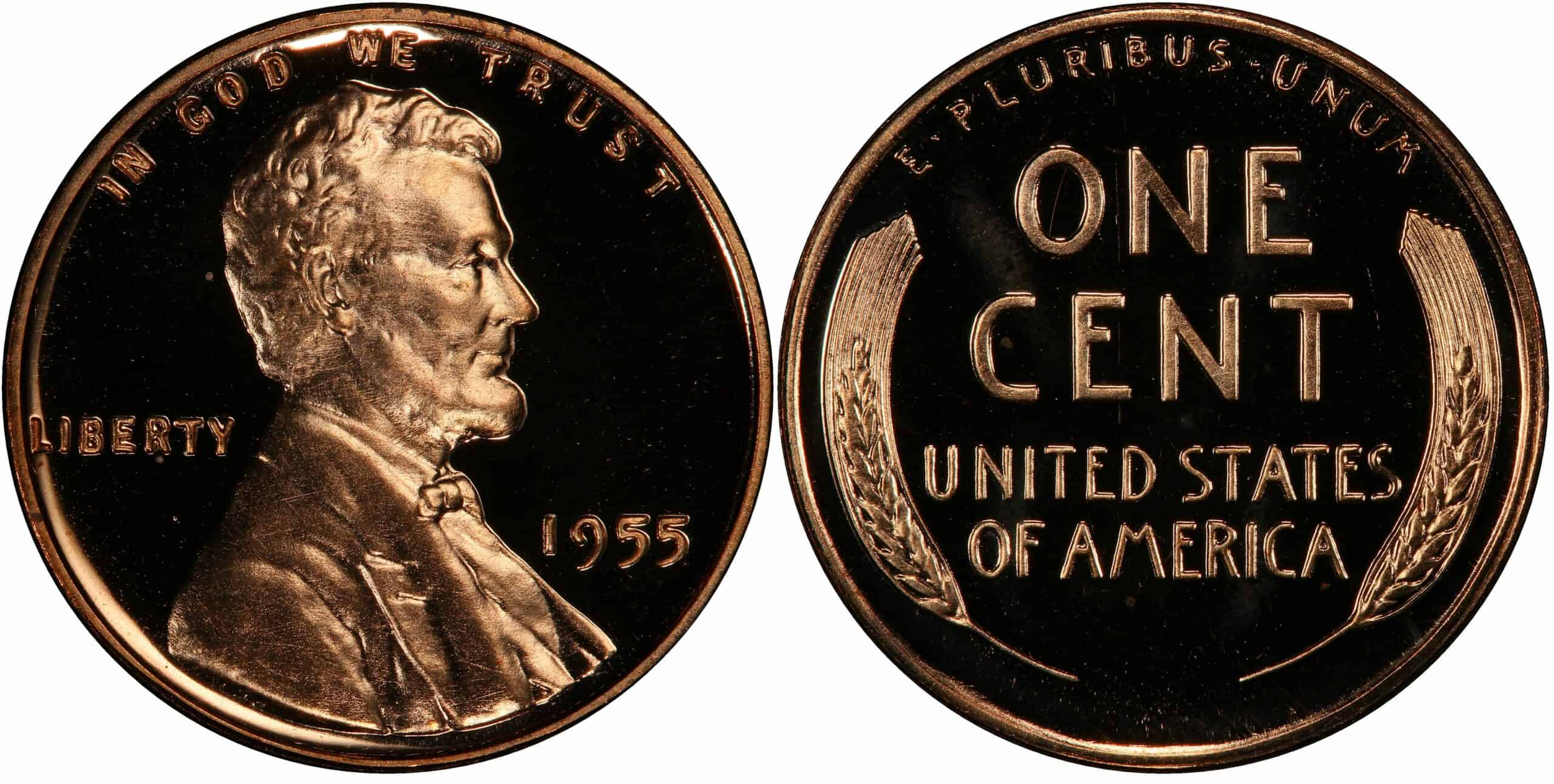 Interestingly, proof coins produced this year come in various prices, and only hardly visible details distinguish pennies worth $6 or $1,500. It is on you to pick out the one with desired toning and contrast.

The Denver mint produced 563,257,500 Lincoln wheat pennies in 1955. The high mintage is responsible for their modest price, although each specimen in the mint state is worth more than its face value.

In most cases, you should set aside $0.25 to $35 for a decent piece, but those with MS 67 ranking are more expensive. The most costly are pennies with red toning that can reach $550 at auctions. The auction record went to one red piece sold in 2002 when one collector paid $7,475 for it. 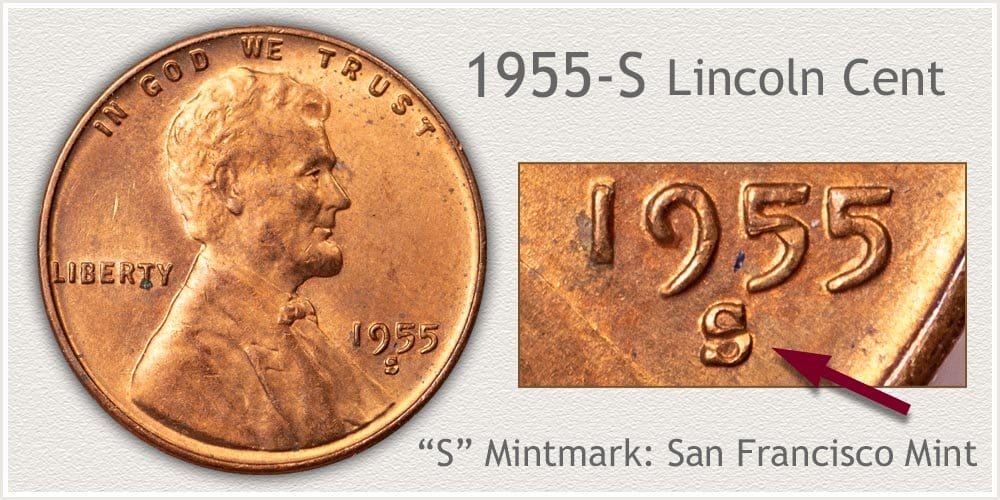 The most desirable pieces with breathtaking red toning can reach an incredible $6,000 at auctions. The most expensive penny with the S mint mark ever sold is the one that reached $7,475 in 2002 at an auction.

No one can say how many 1955 DDO Lincoln wheat pennies were released in circulation, but approximately 24,000 pieces were mixed with the first 10 million regular pennies. It is considered the most famous and appreciated double-die penny in the series.

You can notice a prominent doubling of the word LIBERTY, the motto IN GOD WE TRUST, and the DATE. Unlike the so-called ‘Poor Mans’ double die error worth about $1, this one is visible, and you can effortlessly notice it with the naked eye.

Collectors have estimated that only 10,000 to 15,000 of these error pennies have survived, making them highly valuable and collectible. Their value is $2,450 to over $100,000, depending on their appearance and toning beauty.

The most expensive specimen was sold in 2018 when one collector set aside an astonishing $114,000 for the 1955 DDO MS 65+ RD Lincoln penny at Stack’s Bowers auction.

Be careful when purchasing one of these coins since there are numerous 1955 DDO Lincoln penny counterfeits on the market. Therefore, you should only buy the one with PCGS or NGC authentication.

FAQ about the 1955 Lincoln Penny

There are no rare 1955 Lincoln pennies from the regular strike because of the high mintage. However, those with 1955/1955 DDO errors are scarce and valuable.

Which 1955 Lincoln wheat penny is worth a lot of money?

How much is the 1955 No Mint mark Lincoln wheat penny worth?

An average penny struck in 1955 typically costs $2.25 to $700, depending on toning. Remember that only pieces in uncirculated condition are collectible.

Are there any rare 1955 Lincoln pennies?