Production of Jefferson nickels began in 1938, and they are among the most famous coins of the US Mint to this day. They got their name based on the third American president Thomas Jefferson’s bust shown on the obverse.

The estimated 1954 nickel value depends on the condition, mint mark, and grade. After spending almost 70 years in circulation, these coins have become attractive to collectors, particularly existing variations and errors that significantly increase their price.

History of the 1954 Jefferson Nickel

In 1938, required 25 years of Buffalo nickel coinage expired. In those times, that was a mandatory coin replacement period without Congress’s approval. Since then-President Roosevelt admired Thomas Jefferson, it was not a surprise that he directed the US Mint to launch a competition to coin design in his honor.

In early 1938, the US Mint announced an open competition with a prize fund of $1,000. The competition conditions included Jefferson’s portrait on the obverse and a depiction of his Monticello mansion on the reverse.

Felix Schlag‘s work won among numerous competitors after designing the new coin during four weeks of work. It is known that the existing Jefferson bust inspired him. However, the new coin’s appearance didn’t match the officials’ expectations.

They disliked an angled view of Monticello and disapproved of the writing style. That made it necessary for the designer to adapt the coin reverse, but his effort paid off since the accepted design remained the same for the next 66 years.

Unlike the appearance, the coin composition was changed during WWII because of nickel shortages due to the military industry’s needs. Between 1942 and 1946, the wartime coins version contained copper, silver, and manganese alloy.

Features of the 1954 Jefferson Nickel

The Jefferson nickel from 1954 is an almost seventy years old coin. Unfortunately, most specimens that spent years in circulation show visible signs of wear, making them less attractive to collectors.

The obverse of the 1954 Jefferson nickel 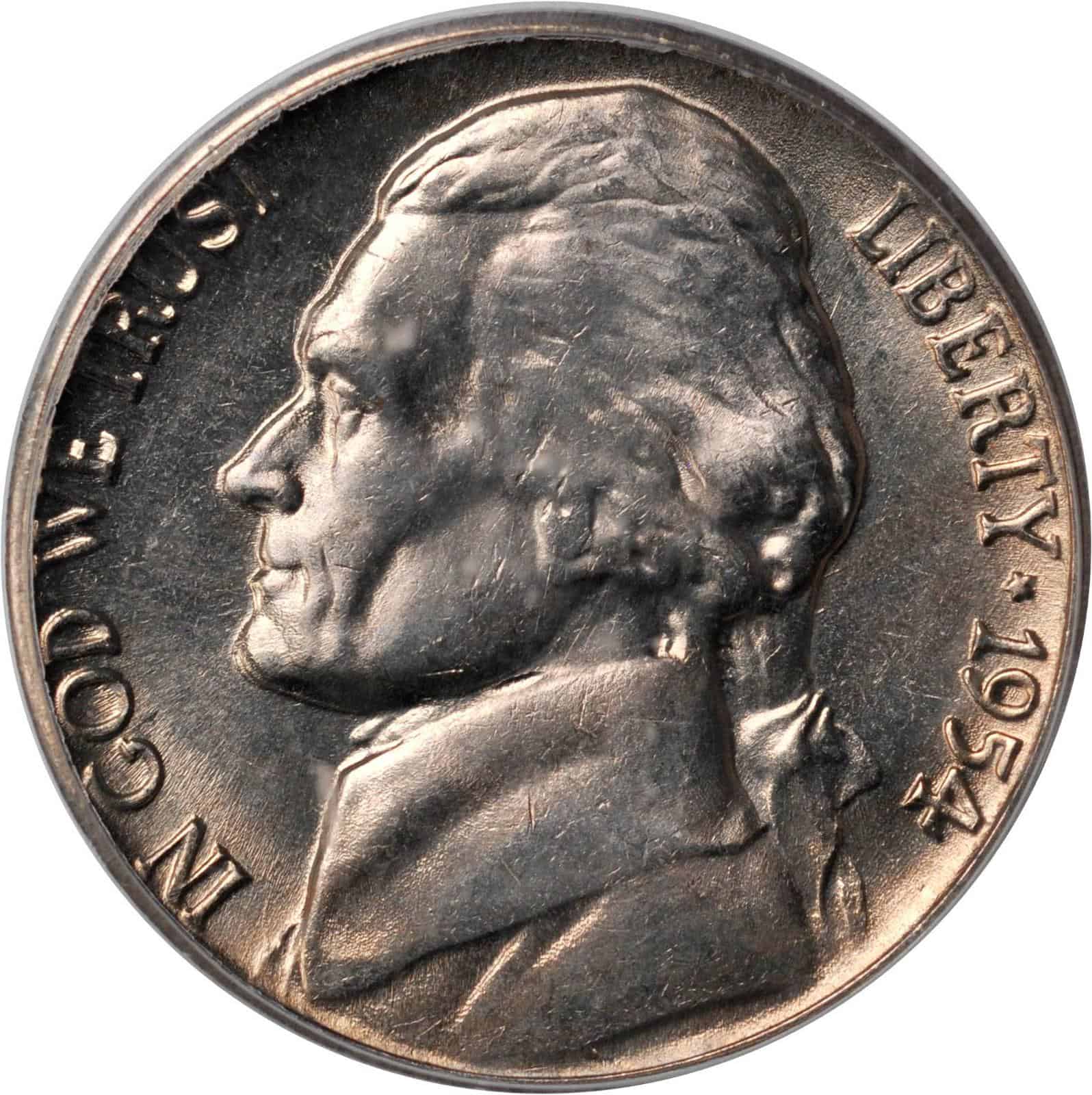 The central part of the obverse shows the third US President, Thomas Jefferson profile. You can also notice two inscriptions, including:

There is also the mint mark between the portrait and the DATE.

The reverse of the 1954 Jefferson nickel 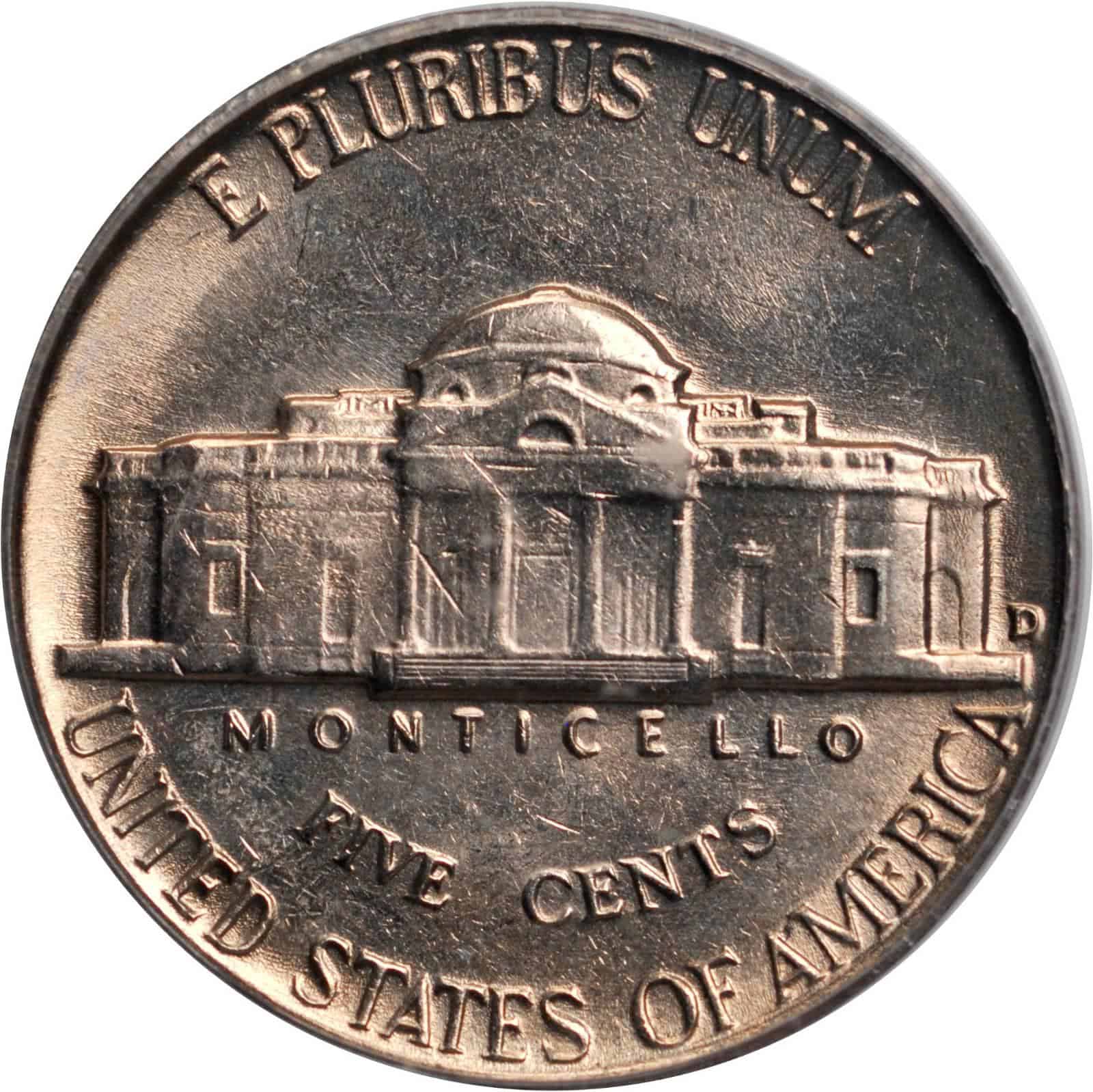 On the reverse is Monticello, a beautiful Jefferson home he made based on the Italian Renaissance style, placed centrally.

The saying E PLURIBUS UNUM stretches above the house, while the state’s name is on the lower rim. Directly below the steps, you can see the building name, MONTICELLO, and the FIVE CENTS denomination.

Other features of the 1954 Jefferson nickel

Jefferson nickels from 1954 are relatively easy to find coins on the market nowadays. The primary reason for this is a high total mintage of 194,437,860 coins. This year, three different mints minted four types of this nickel. 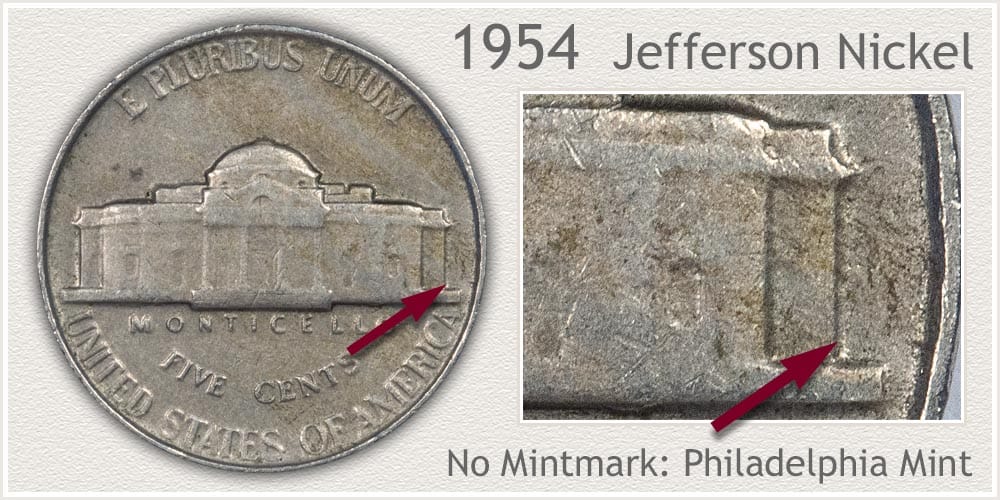 Contrary to usual practice, the Philadelphia mint didn’t mint the most Jefferson nickels in 1954. The mintage of 47,684,000 was only the second largest that year. You can recognize one of these pieces effortlessly because they don’t bear the mint mark.

Although these nickels are pretty old, you can expect their value to be low. For instance, you only need to spend 15 cents for a specimen from circulation in average conditions. Pieces in the mint state are a bit more expensive, and you can buy them for about $17.

On the other hand, some nickels can reach significant prices at auctions. One collector bought the 1954 MS 67 Jefferson nickel for $805, while the current auction record for the one with Full Steps is $8,813. 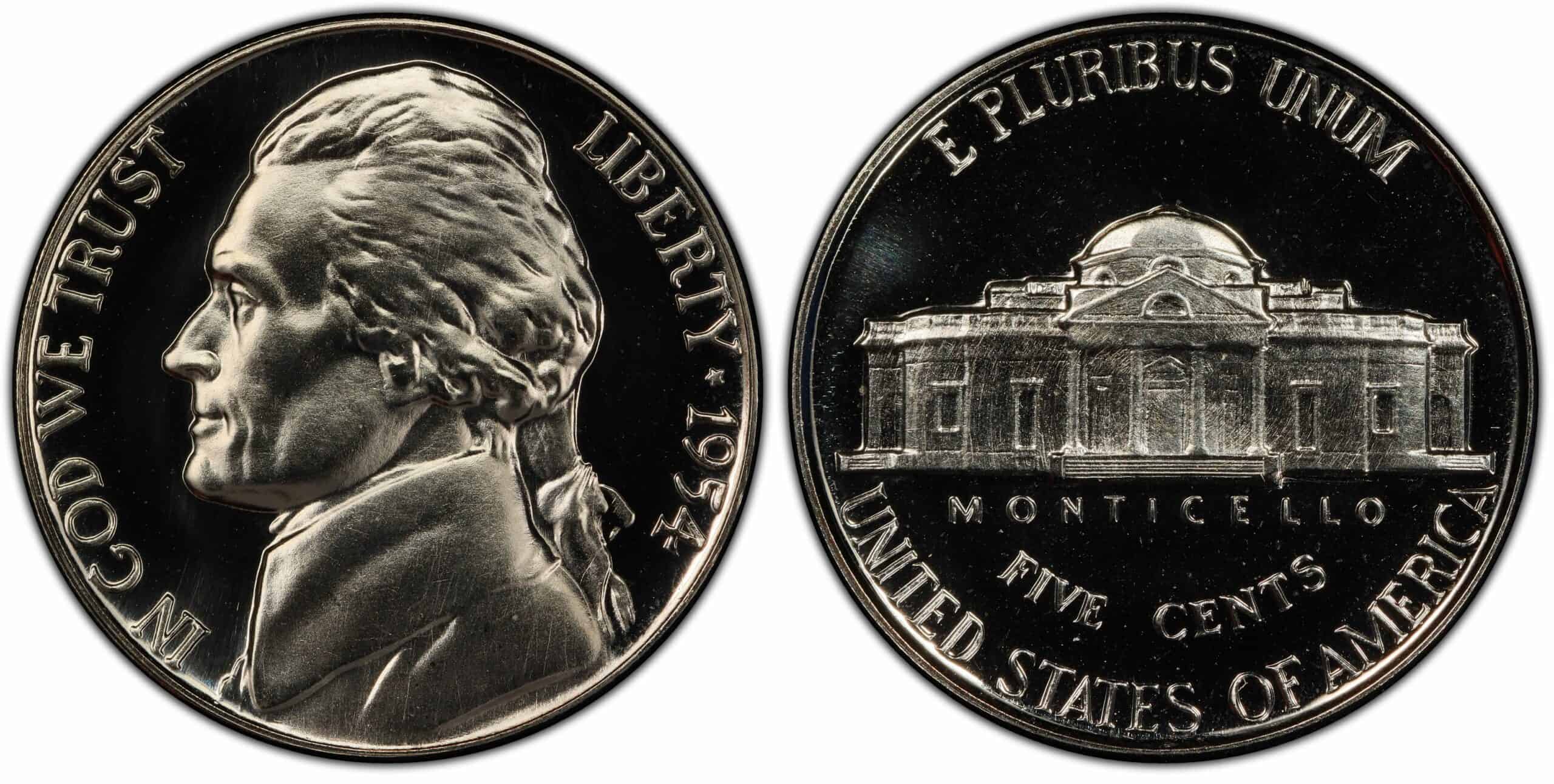 In 1954, the Philadelphia mint produced 233,300 Jefferson nickel proof coins. You can quickly find some in excellent condition since they have never been released into circulation.

Their value can significantly differ depending on the preservation levels. It ranges from $20 for an average proof coin to $1,250, the price for an excellently struck nickel with deep cameo contrast. 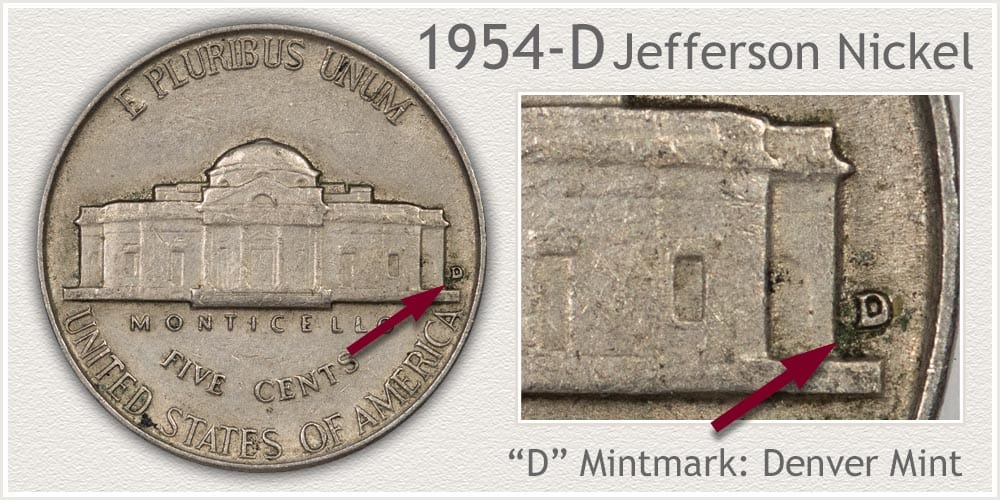 Due to the extremely high number of minted coins, they are abundant in the current coin market, and their value is very affordable. It will be enough to set aside 10 cents to buy a circulated specimen in an average condition. An uncirculated piece is more expensive, and you need about $35 to buy one.

As always, some nickels from this year have higher values. For example, the 1954 D nickel ranged MS 66 was sold on eBay for $932, while the record value of $9,964 achieved the coin marked Full Steps. 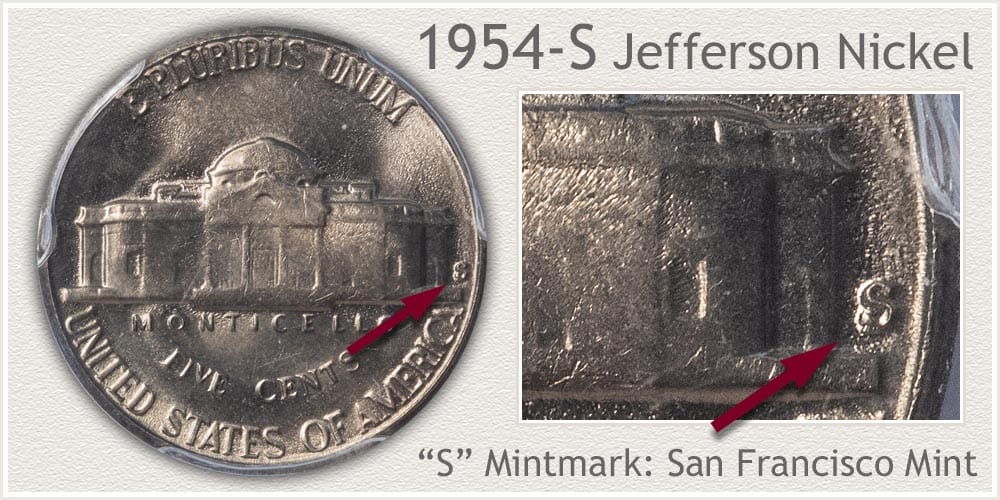 The San Francisco mint produced only 29,384,000 Jefferson nickels in 1954, and it was the last nickel series from this mint for the next ten years. The pause in minting after this year was necessary because increased hoarding of these coins.

These nickels are still abundant on the coin market, and their value is consequently low. You can buy an average well-preserved specimen from circulation for 10 cents, while you need about $17 for a piece in perfect condition.

However, auction records can surprise you. One high-graded 1954 S nickel was paid $646 at the auction in 2017, while one piece with Full Steps reached $35,250. That is how much money one dedicated collector set aside for the coin with the mint mark S at the auction in 2020.

You can recognize one famous variation and a few errors among nickels struck in 1954. Let’s see.

The Jefferson nickel design is known for having a low die strike on the steps. To distinguish particular coins, PCGS and NGC introduced the Full Steps mark. It is the gradation mark for nickels that have five or six precisely struck steps at the entrance to Monticello.

Such nickels are much scarcer than those with a weak impression in the area of the stairs, so their value can be significantly higher. Their value varies between $60 and $26,000, depending on the mint mark and condition.

Among the most famous 1954 Jefferson nickel errors is this one where the letter D is visible below the S mint mark. During the 1950s, only Philadelphia produced dies for all mints, plus they still struck their marks by hand. Such a situation can explain this error occurrence.

There are two possibilities as to how this error on the coins arose:

There is no exact data on how many of these nickels exist, but numismatists assume that the number is less than 200,000. Therefore, these coins’ price is higher compared to regularly struck pieces. You can buy a circulated specimen for about $10, while well-preserved ones cost a little less than $120.

The most expensive specimen of this nickel appeared at auction in 2004, when the 1954 S/D MS 66 nickel sold for $3,450. It is unknown whether there is such an error piece among Full Steps coins.

When the die strikes the same coin two or three times, an error known as a double die occurs. Jefferson nickels with this error have imperfections on:

There are currently no known 1954 Jefferson nickels with the expressive doubled dies. Instead, you can find smaller double dies worth $20 to $50.

You can often find 1954 Jefferson nickels with this error and buy one for an affordable sum. Their value depends on the design percentage visible on the surface.

You can find the 1954 Jefferson nickel with 3% to 5% off-center for five or ten dollars. On the other hand, specimens with 50% off-center error with the visible date and mint mark can cost you more than $100.

FAQ about the 1954 Jefferson Nickels

The 1954 Jefferson nickel is readily available on the market, so you can find specimens from all three mints for a very affordable price. In other words, this coin is not among the rare ones.

Which 1954 Jefferson nickels come with a high price?

What is the 1954 No Mint mark Jefferson nickel’s price?

Although it was typical for the Philadelphia mint to have the largest mintage, this was not the case with the 1954 Jefferson nickel.

That fact doesn’t significantly affect its value, and you can buy an average well-preserved piece for ten cents. On the other hand, specimens in the mint state are more expensive, and you can buy them for about $30.

What is the rarest Jefferson nickel?

The Jefferson nickel production began in 1938, so it is not easy to find specimens from the early period in the mint state. Therefore, collectors often put in a lot of effort to complete their collections.