1953 saw the production of a penny known as the Wheat penny. But if you’ve come across one of these coins, is it worth holding on to?

That’s what we’re here to find out. We’re going to investigate the 1953 Wheat penny value. And we’ll find out what separates a basic coin from something rare and collectible.

History of the 1953 Wheat Penny

The Wheat penny is the earliest version of the cent known as the Lincoln cent. That series takes its name from the portrait of the former president on the obverse. And the Wheat penny is so called because of the design on its reverse, two ears of durum wheat.

The first Wheat pennies came out of the coin presses in 1909. By 1953, the design was in its closing years, with the final examples struck in 1958.

In carrying a portrait of Abraham Lincoln, the Wheat penny made American numismatic history. It was the first coin ever to feature a real person. Until then, it had been the legendary figure of Lady Liberty that had usually graced US coins.

The idea of depicting a real person on the nation’s coinage had, at one time, been considered unseemly. But 1909 was the centenary of Lincoln’s birth, and public sentiment was changing. The idea of honoring Lincoln in this way had strong popular support.

The earliest pennies were made almost entirely of copper, but the second World War briefly changed that. Copper was needed for the war effort, so in 1943, pennies were instead made from steel coated in zinc. The changed released enough copper for 1.25 million shells.

The following year, the pennies switched back to 95 per cent copper, with the remainder tin and zinc. The recipe would remain the same until the final wheat penny was struck in 1958.

1959 marked 150 years since Lincoln’s birth. To celebrate the anniversary, the Mint agreed a new design for the coin’s reverse, replacing the wheat with the Lincoln Memorial.

Features of the 1953 Wheat Penny

The Obverse of the 1953 Wheat Penny 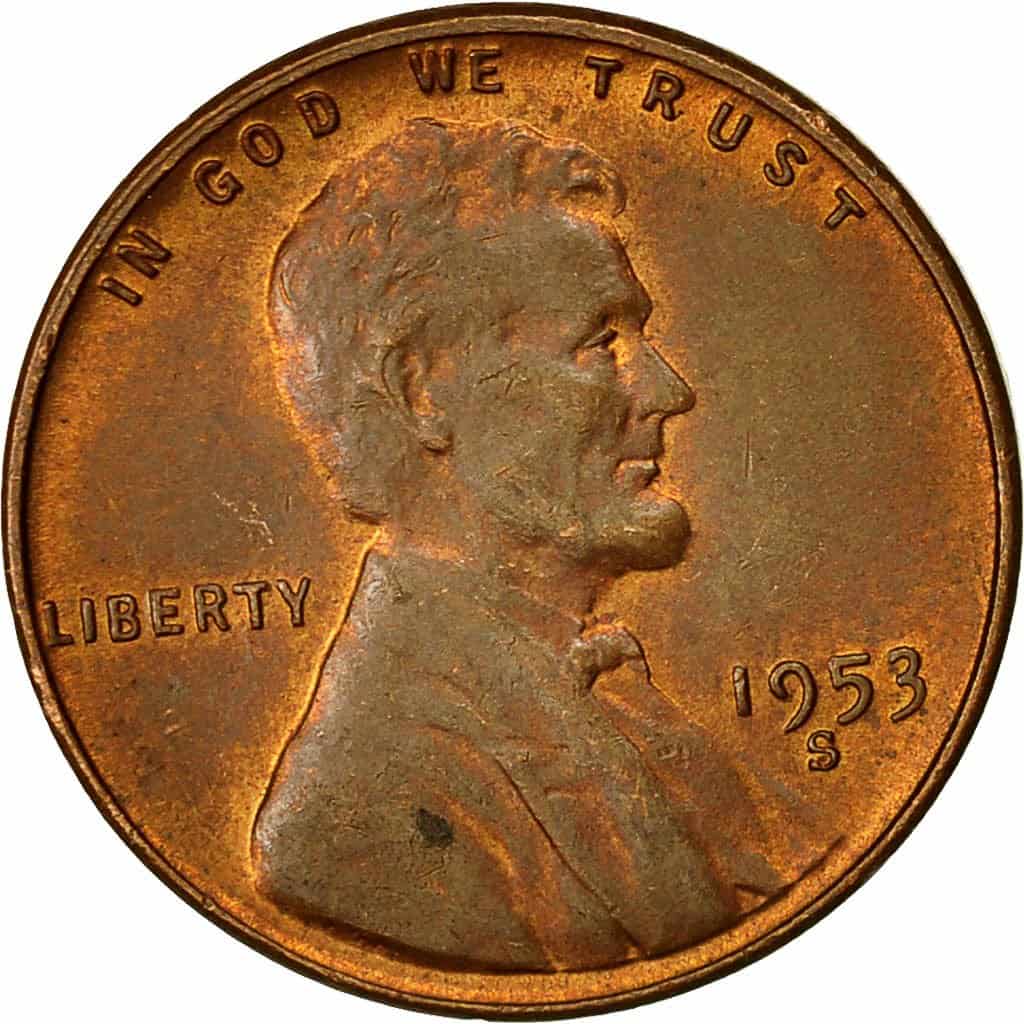 Look at the obverse of the 1953 Wheat penny and you’ll see a familiar image. The portrait of Abraham Lincoln is the same one that still appears on the cent today. It was the work of an American artist and sculptor called Victor David Brenner.

Brenner based his portrait on a photograph taken of Lincoln at the studio of Matthew Brady. There’s disagreement over whether it was Brady himself who took the photo, or one of his assistants.

The coin shows the bust of Lincoln in profile facing right. Brenner later wrote in a letter that he had imagined Lincoln as he believed he would have looked when reading to children. That, the artist, felt, would have been when he was at his brightest.

Brenner’s coins caused controversy – but it wasn’t the design that was to blame. Instead it was Brenner’s initials, which appeared on the reverse of the coin.

Placing the artist’s initials on a coin they designed was standard practice. But Brenner’s were considered too large, and to border on “advertising”. So despite the artist’s protests, they were removed.

You’ll nevertheless see them on the obverse of 1953 Wheat pennies. That’s because they were reinstated in 1918, this time on the lower edge of the cut-off of Lincoln’s bust. It’s the same position they hold on cents minted to this day.

Above Lincoln’s portrait are the words “In God We Trust”. To his left is the word “Liberty”, while the date is on the right. Coins minted in Denver and San Francisco will also have a mint mark – a “D” or an “S” respectively. It appears below the date, between the digits “9” and “5”.

The Reverse of the 1953 Wheat Penny 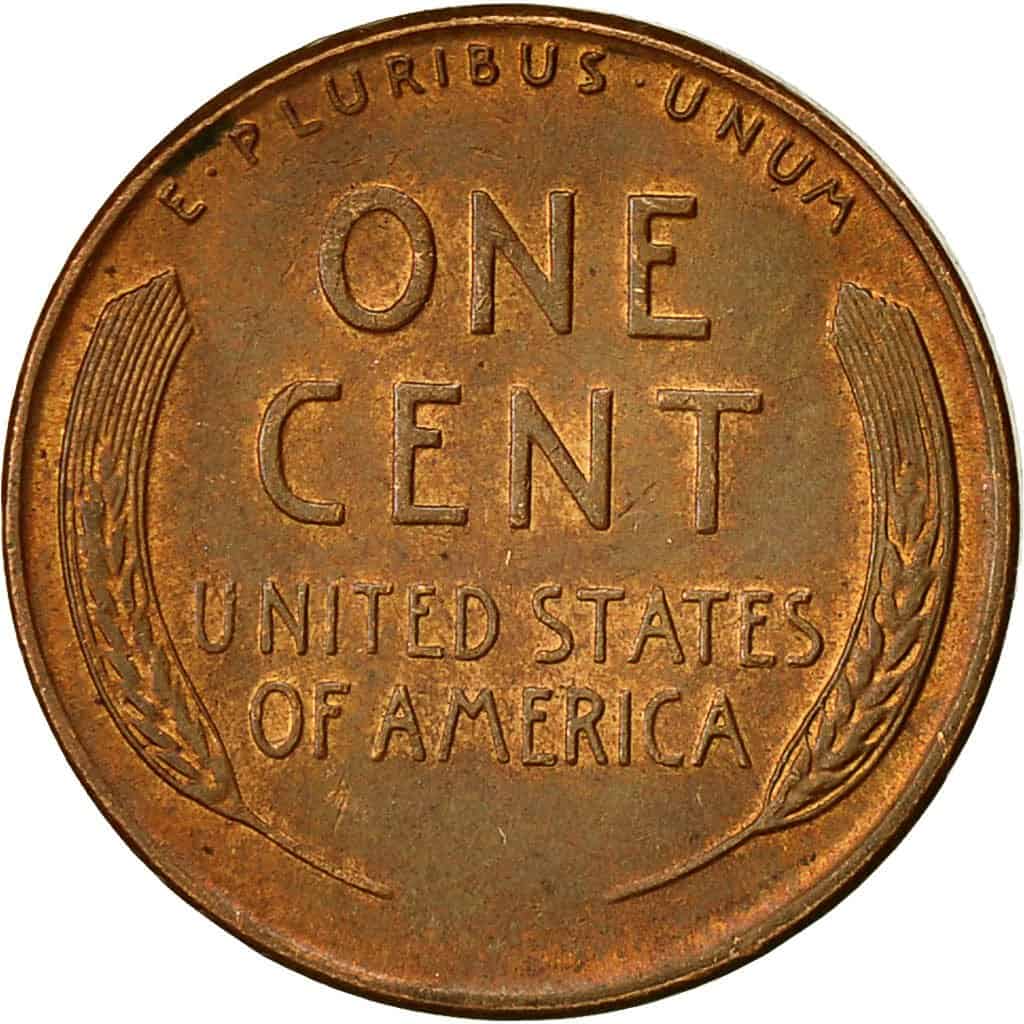 The reverse is the side that gives the Wheat penny its popular name. It too was designed by Brenner, and shows two ears of durum wheat curving in parallel to the coin edges.

It wasn’t the first design Brenner suggested for the coin. That had been a tree branch, but it had been rejected. It was eerily similar – some might even say “copied” – from French coins being produced at the same time.

The Mint Director, Frank A. Leach, asked for a new and simple design. The ears of wheat were the result. Between them in large letters is the denomination, with the country name underneath.

Curving along the top of the coin edge are the words “E pluribus unum”. The Latin motto is a reference to the union of the states, and means “From the many, one”.

Other Features of the 1953 Wheat Penny

The 1953 Wheat penny has a plain edge, measures 19 millimeters in diameter, and weighs 3.11 grams.

Its 95 per cent copper composition means that its color changes as the metal ages. When new, it’s a deep red. But when handled and exposed to the air, the red turns to brown.

Wheat pennies with at least 95 per cent of their surface area in the original red color are the most desirable. They’re graded “red” or “RD” by the independent coin grading agencies.

If, on the other hand, at least 95 per cent of the surface area is brown, the coin is graded “brown” or “BN”.

And if the color is somewhere in the middle, it’s graded “red and brown” or “RB”.

You can find out more about how to color grade Lincoln pennies in this YouTube video from CoinOpp. Well over a quarter of a billion Wheat pennies were struck in Philadelphia in 1953. You can spot them because they don’t have a mintmark on the reverse. The mint facility at Philadelphia was the first in the US, so for a long time it didn’t use a mintmark on its coins.

With so many coins having been produced, finding one isn’t difficult. Circulated brown coins can be picked up for little more than their face value.

But the better their condition, the rarer they get. And when it comes to the highest grades, the 1953 wheat penny is among the hardest to find of any mintage between 1930 and 1958.

That’s because most of the coins that came out of the Philadelphia mint facility that year had been poorly struck. Even original uncirculated coin rolls rarely contain any examples finer than MS63. So finding a gem quality coin is rare.

The finest known examples assessed by the independent coin graders the PCGS are three red pennies graded MS67+. And each of those is valued at a whopping $20,000. Not bad for a copper coin. The Denver mint facility was even more prolific than Philadelphia. In 1953, it struck well over 700 million Wheat pennies. They can be identified by the “D” mint mark which appears on the reverse.

As with the Philadelphia pennies, it’s generally red examples that are most valuable. They’re not as sought after as their Philadelphia counterparts.

The honors for the finest 1953 Denver pennies are shared between nine red coins graded MS67+. And if you want to get your hands on one of those, you’ll be looking at a price tag of around $4,500. In contrast to the Philadelphia and Denver facilities, San Francisco produced relatively few 1953 Wheat pennies – just under 182 million. They’re distinguished from others by the “S” mint mark on the reverse.

Despite the lower mintage, they’re nevertheless great survivors. They’re less scarce than Philadelphia Wheat pennies from the same year. And at most grades, their prices are very similar to Denver pennies.

That’s partly because the San Francisco Wheat penny survives at two higher grades. A red MS67+ penny is valued at $1,000. And the sole example to have been graded MS68 by the PCGS is valued at $17,500. 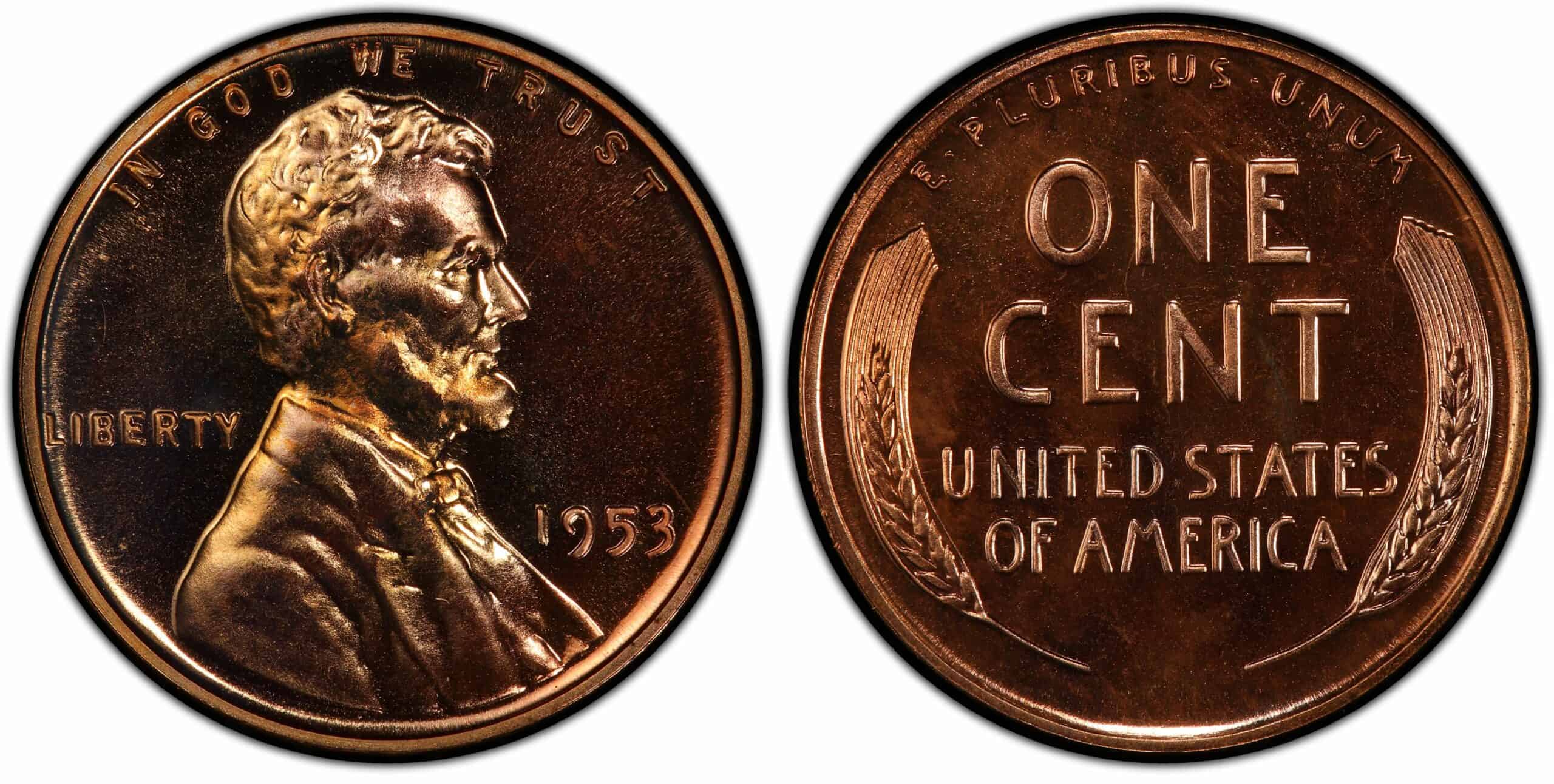 The 1953 proof pennies are grouped into three different categories: red, cameo and deep cameo (also known as “ultra cameo). All other things being equal, red coins are the least valuable and deep cameos the most.

The coin grading agencies award a cameo designation to coins that have an attractive contrast between reflective fields and frosted devices. With a deep cameo, that contrast is even more striking.

The difference in value between the categories rises with the grade of the coins. At PR67, a cameo proof ($525) is valued at more than four times as much as a red proof ($120). And a deep cameo at the same grade is worth $3,850.

The auction record for a 1953 proof Wheat penny was set in 2021. A coin graded PR67 and with the deep cameo designation came up for sale with an estimate of $3,000 to $4,000. But the exceptional contrast between the reflective fields and frosted design saw it cross the block for $10,869. 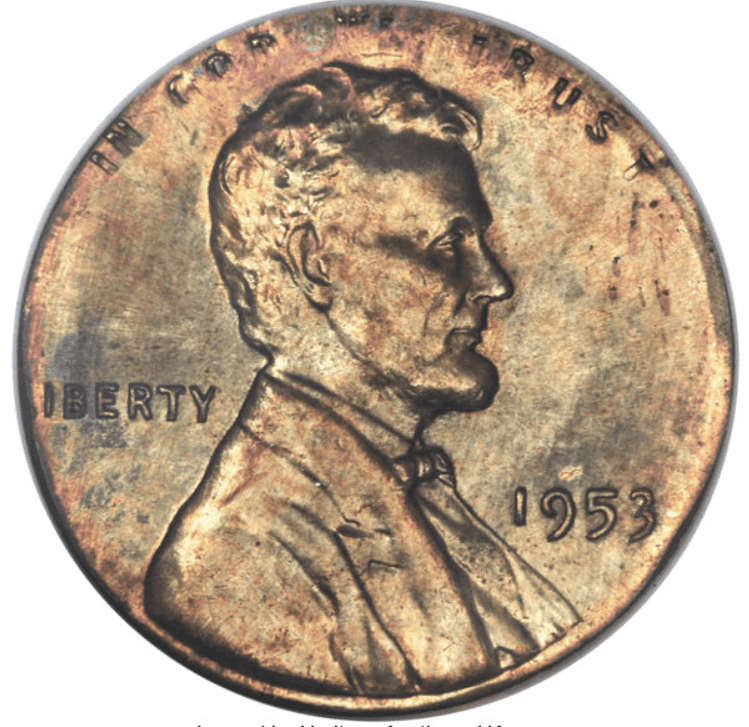 One of the most unusual errors among 1953 Wheat pennies was a coin struck on the wrong planchet. Somehow, it was struck on a planchet intended for a Cuban 1-cent coin. It’s both the wrong size and the wrong color.

But it was in great uncirculated condition, graded MS62. And it sold at auction for over $3,000.

A cud is a type of error produced by a defect on the die used to strike the coin. One such error appears on the Denver Wheat pennies struck in 1953. A bar of metal appears between the “B” and “E” of “LIBERTY”. It looks a little like an “I”, giving this error its name of the “BIE” variety.

One such coin, graded MS63 red by ANACS sold at auction for just $15. So while it’s interesting, it’s not particularly rare or valuable.

Some of the Wheat pennies struck at both the Denver and San Francisco mint facilities had their mint marks repunched. Look closely, and you can see the shadow of the first “D” or “S” next to the second.

Many of the proof pennies minted in Philadelphia in 1953 had double die errors on the obverse. These were the result of a problem during the manufacture of the obverse die used to strike them.

If the die moved as it was being struck, a double image was created. This was then transferred onto the coins struck from the die. Look for evidence of doubling on the date on the obverse.

The value of this error depends on the condition of the coin. The auction record was set back in 2014 for a coin graded PR67 red “ultra cameo” by the NGC. It sold for $1,116, including the buyer’s premium.

This YouTube video from Couch Coin Clips looks in detail at a number of 1953 Wheat penny errors.

It isn’t, particularly – unless it’s a coin that’s in the very best condition. The Denver mint produced over 700 million Wheat pennies in 1953, so it isn’t difficult – or expensive – to pick up a circulated coin.