Some newbies have noted that the Pre-Euro German Pfennig coin looks a lot like the American Wheat Penny. A Pfennig is 100th of a Deutschmark in the same way that a penny is 100th of a dollar. Their devices look similar, but pennies have two wheat stalks and pfennigs have two rye stalks. For now, let’s accurately assess the most recent 1951 Wheat Penny Value.

History of the 1951 Wheat Penny

Some coin collectors are attracted to the physical beauty of the coins they keep. Others are more interested in their investment value. And this difference in perspective applies to coin designers as well. In-house mint engravers prefer to make coins that are cheap to mint since these coins will have higher seignorage and therefore earn more revenue for the US Mint.

Another way that in-house engravers can make – and save – money is to choose designs that need fewer strikes because they’re quicker to coin and the dies last longer. It’s a crucial coin feature because hubs and dies are extremely expensive!  To achieve these goals, in-house engravers will sketch simple designs with low relief so they’ll imprint in one or two strikes.

Low-relief coins will also retain their details longer in circulation because they have fewer raised areas that can wear down in people’s hands. But in 1904, President Theodore Roosevelt asked the mint to start making elaborate coins that had higher artistic merit. He brought in commercial artists to get the job done, and they clashed a lot with mint experts.

The Lincoln Wheat Penny was part of this project. It was designed by Victor David Brenner, née Avigdor ben Gershon. And his disputes with Chief Mint Engraver Charles Barber led to his initials being taken off his coin from 1910 to 1917, even though the penny was in popular use from 1909 to 1959!  Barber had designed the previous dimes, quarters, and half dollars.

Features of the 1951 Wheat Penny

Let’s talk about how coins are made. The artist makes a sketch, then creates a master mold from rubber, plaster, and epoxy. This mold is called a Galvano, and it’s used to make the master hub, which then makes the master die. The hub and die are interchanged to make a working hub and a set of working dies, and these dies eventually make business strike coins.

Now let’s look at the individual features of the 1951 Wheat Penny. Remember that the obverse is the heads side, the reverse is the tails side, the blank metal discs are planchets, the images are devices, and the background is the field. Any words on the coins are called mottos or legends. The raised border of the coin is called the collar, and the rims are called edges.

The Obverse of the 1951 Wheat Penny 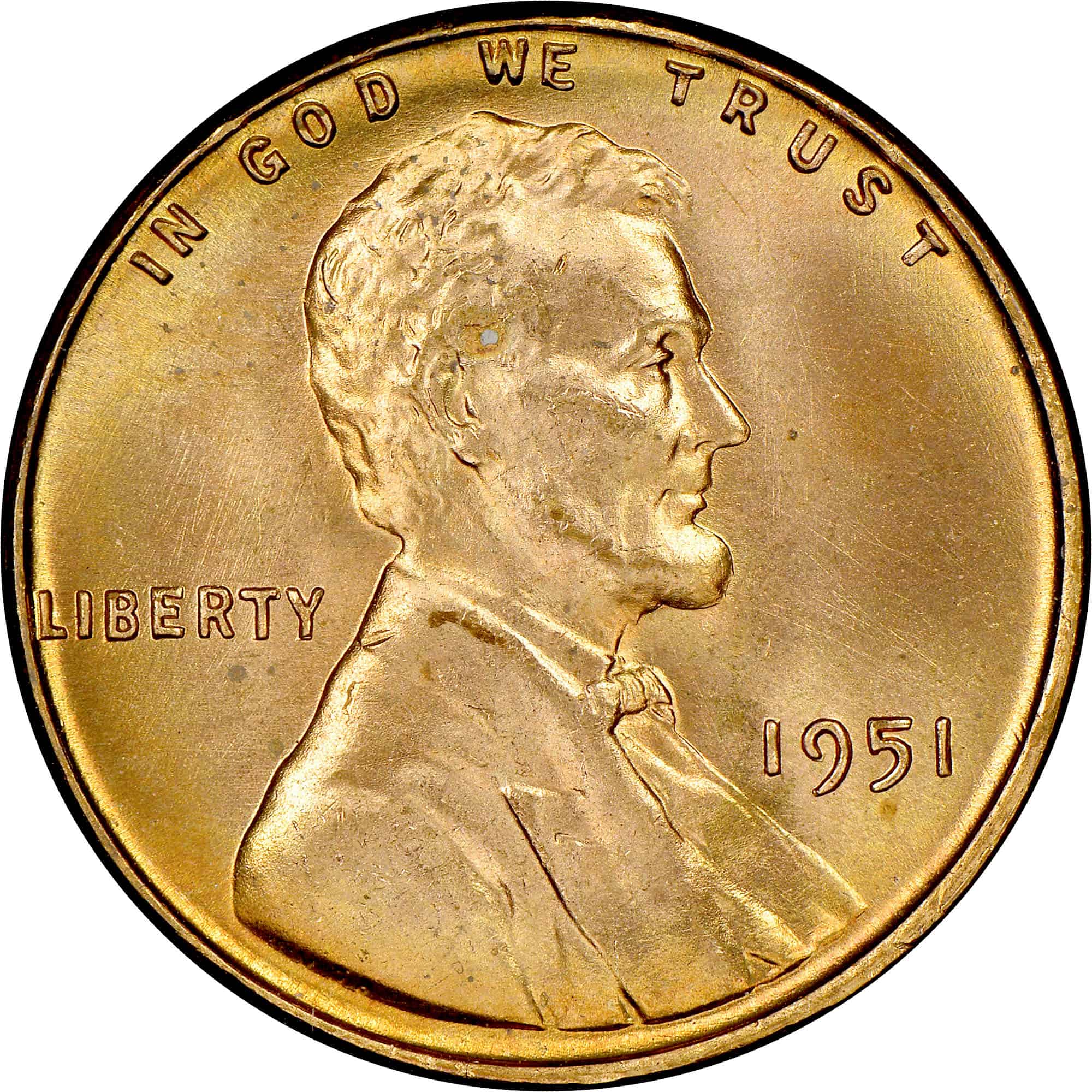 The obverse (heads side) of the 1951 Wheat Penny has a profile of Abraham Lincoln facing right. The coin has two legends – In God We Trust above Lincoln’s head, and Liberty on the left behind his back. The right side of the coin has the mint date, with the mint mark right below it. At the shoulder cut-off are the initials VDB for Victor David Brenner, the designer.

The Reverse of the 1951 Wheat Penny 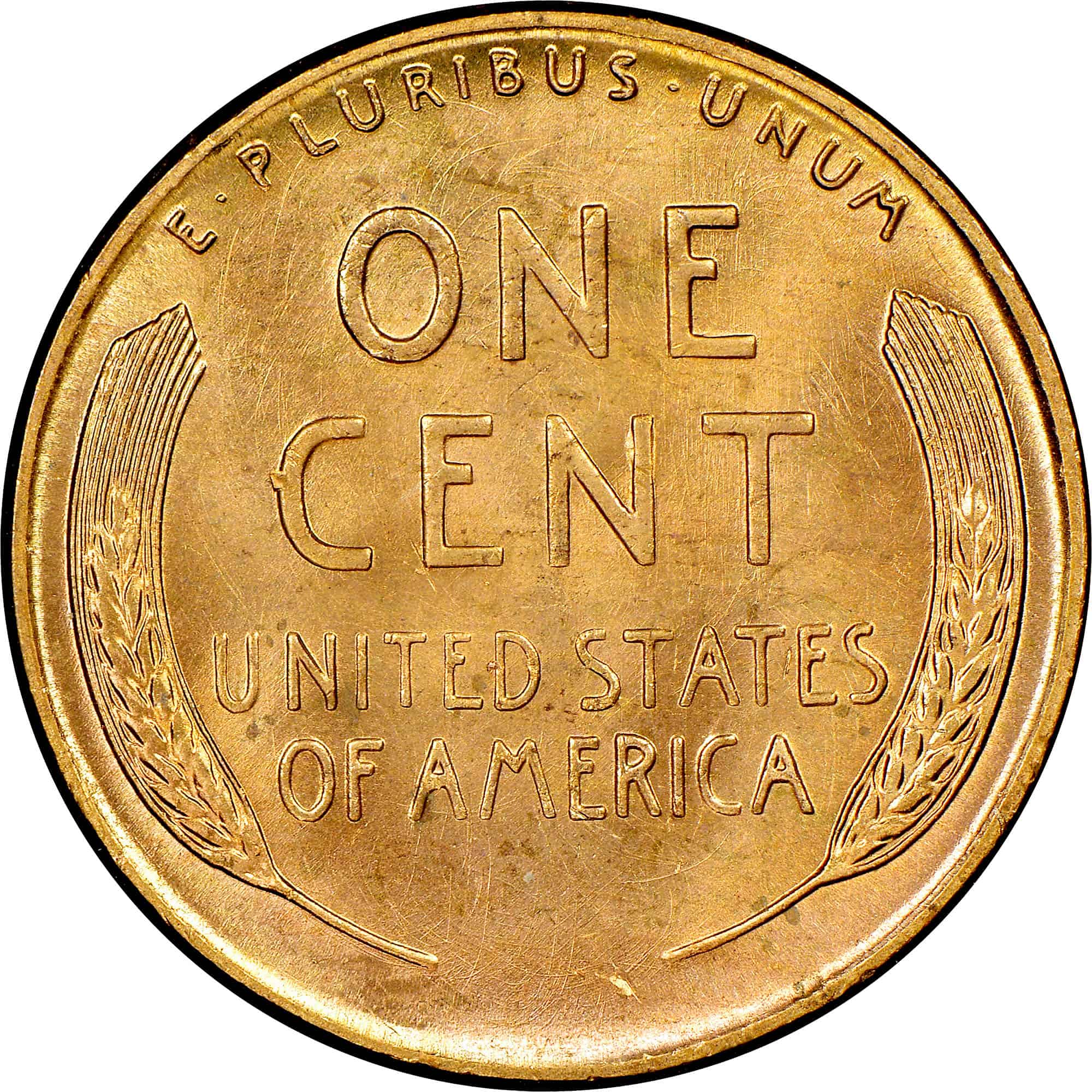 The reverse (tails side) of the 1951 Wheat Penny has a pair of durum wheat stalks placed next to the edges of the coin. They’re positioned to frame the three legends that appear at the center of the coin, so E Pluribus Unum runs along the top, between the tips of the two wheat stalks. Below that is One Cent in a prominent font, followed by United States of America.

Other Features of the 1951 Wheat Penny

The 1951 Wheat Penny was 95% copper, and that 5% balance was either tin or zinc, though the mint would sometimes combine both base metals. The cent was 19.05mm in diameter and weighed 3.11g. It had a smooth or plain edge without any reeds. These coins had that distinct copper tone graded RD for red (best grade), RB for reddish-brown, or BN for brown.

Collectors will sometimes focus on a specific mint mark, targeting all the coins made in that mint over several years. Others prefer to buy a full set with one specimen from each mint in that particular year. Either way, the mint mark influences the value of the coin, so let’s take a look to see the mintage figures, approximate selling prices, and other location-related facts. 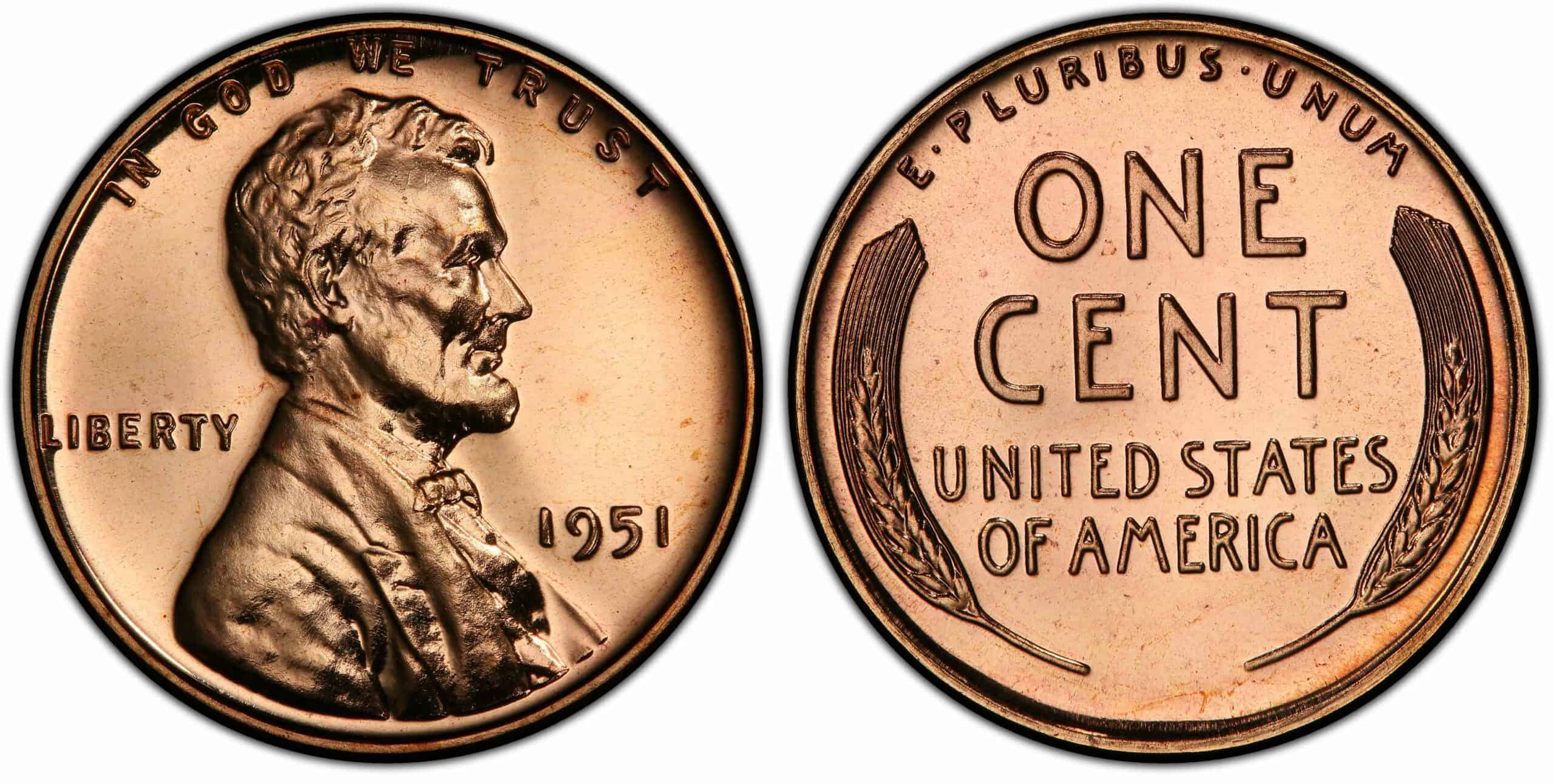 A Proof Coin is minted with exceptional clarity and detail. Initially, it was a quality control tool used to verify dies. Later, they were sold directly to collectors to earn extra revenue for the mint. Contemporary proof coins are exclusively made at the San Francisco Mint, but until the late 1960s, they were made at the Philadelphia Mint and didn’t have any mint marks.

Earlier Proof Pennies were made as Matte Proofs, but after 1936, the mint introduced mirror-like reflective proofs. The coins acquired this fancy finish through burnished planchets that were polished before they were punched into discs. The blanks were then struck using specially treated die chemicals to keep the field shiny and the device frosted.

As we saw above, 1951 Wheat Pennies in high mint states can sometimes be worth thousands of dollars. But even in lower grades, certain errors are quite valuable, so let’s check some out.

Coins have tons of details, and most of them are machined onto the planchet. But the mint mark is added last, typically by hand, at least until 1989. So if the coiner wobbles or twitches, the second or third strike may be askew. This is called a re-punched mint mark or RPM. It’s written as D over D aka D/D and is worth $10 in AU 58. Use a coin microscope to check.

On occasion, coins from one mint are transported to another mint for recycling or to cover a shortfall. In such cases, a new mint mark is placed over the previous one, but you can often see the earlier one peeking through. This is called an Over Mint Mark or OMM, written as D/S, and is worth $2,300 in MS 67 RD, though a sample only went for $1,440 in a 2018 sale.

When you see FS on a coin, it could mean two things. On a coin that has a staircase on its reverse, it means Full Steps. But on an error coin, it’s a First Strike, meaning the error was validated within 30 days of the coin’s initial release. The D/S OMM is an FS error and comes in two varieties. And this second type is $30 in AU 53, $60 in MS 63, and $120 in MS 65RD.

To make a working die, a working hub has to strike it two or more times. And if the die shifts between the first and second strikes, you’ll get a doubled-die error that will be reproduced on every coin it mints. This variety of 1951-D Wheat Penny DDO can be spotted by checking for doubling on Liberty and In God We Trust. The error is worth $146 in MS 65.

It’s unusual to find a doubling error on a proof coin because they’re minted so carefully. But remember, this is a Proof Penny coined at the Philadelphia Mint, and their conditions aren’t as stringent as San Francisco, especially back in the 1950s. On the upside though, this error adds premium value to this coin. It’s worth $150 in MS 65 and can reach $600 in MS 67.

If the die moves while it’s being struck by the hub, you could end up with a DDO, TDO (tripled), or QDO (quadrupled) error variety and these can occur on the reverse as well. But if it’s the planchet that moved between die strikes, you get an off-center error based on the angle of misalignment. This one left 60% of the coin blank. It was $195 in MS 63RB in 2019.

When you’ve been working with Lincoln Pennies for a while, you’ll get better at spotting when something is off. If you do, weigh and measure the coin to confirm. This 1951 (P) is thinner than normal, so it could be broad struck or it may have used a slimmer planchet. It’s not worth much, but in VF 25, this penny sold for $30 in 2008, and that’s still more than 1c!

Apart from Wartime Pennies that were zinc-coated steel, a penny from any year should have distinct copper toning. Even modern post-1982 pennies have a solid coat of copper over their zinc innards. So a 1951 Wheat Penny in a silver shade is likely a planchet error, and this one was struck on a silver dime. This error plus the melt value made this coin sell for $750 in 2019.

Earlier, we looked at a DDO on the 1951 (P) Wheat Penny. Now let’s review one that appears on the 1951-D Wheat Penny. Like most doubling errors, the best place to spot it is on the numbers and letters, though pennies from some years exhibit doubling on Lincoln’s eye or ear. On this coin, check the mottos. The error is worth $20 in AU 53 and $100 in MS 65 RD.

FAQs About the 1951 Wheat Penny

I have a 1951 proof penny that has a die break (extra metal) on obverse Above eye brow and forehead. No mention in this article about this error and what it's worth. Wish I could find out!