If you’ve come across a 1947 nickel, you may be wondering what its value is. This five cent piece was minted in the United States in 1947 and has since become a rare and valuable coin in some instances. In this blog post, we will discuss the value of the 1947 nickel and some of its features, its history, and more.

So, if you’ve got one of these nickels lying around, it’s definitely worth taking a closer look. Keep reading to find out more information!

The 1947 nickel is an extremely classic and recognizable coin. It was minted in the United States as a five cent piece, which is half the value of a dime. It has an obverse (front side) depicting Thomas Jefferson, the 3rd President of the United States, and a reverse (back side) that features Monticello, his beautiful estate in Charlottesville, Virginia.

This coin was introduced in 1938, just nine years earlier, replacing the buffalo nickel (also known as the Indian head nickel). Coming in on the coattails of the newly designed Washington quarter, this nickel was designed with a president as well in order to commemorate Jefferson’s upcoming 200th birthday. It was made from a nickel alloy in 1947, just a couple of years after World War II (when the coin was made from other metals in order to conserve nickel for the war effort).

It was designed by a man named Felix Schlag, who was born in Germany but moved to the United States of America just a decade or so before designing the Jefferson nickel. He entered a competition (against 390 other artists) and won the right to feature his images of Thomas Jefferson and Monticello on the coin. The US Mint didn’t love his original rendition of Monticello, but after it was tweaked, it stuck around on the back of the nickel for around 70 years!

Unfortunately, Felix Schlag didn’t receive credit recognition on the coin itself until long after he won – until the 1960’s, when they added “FS” to the bottom of the obverse side of the nickel. He did, at least, earn $1,000 at the time that his design was accepted, and just like that, the Jefferson nickel became an important part of American history. The 1947 nickel is no exception.

Now that we’ve taken a look at the background of the 1947 nickel, let’s discuss its features. This includes the design on the obverse and reverse, as well as its metal composition, its mint marks, and its size and weight.

The Obverse of the 1947 Nickel 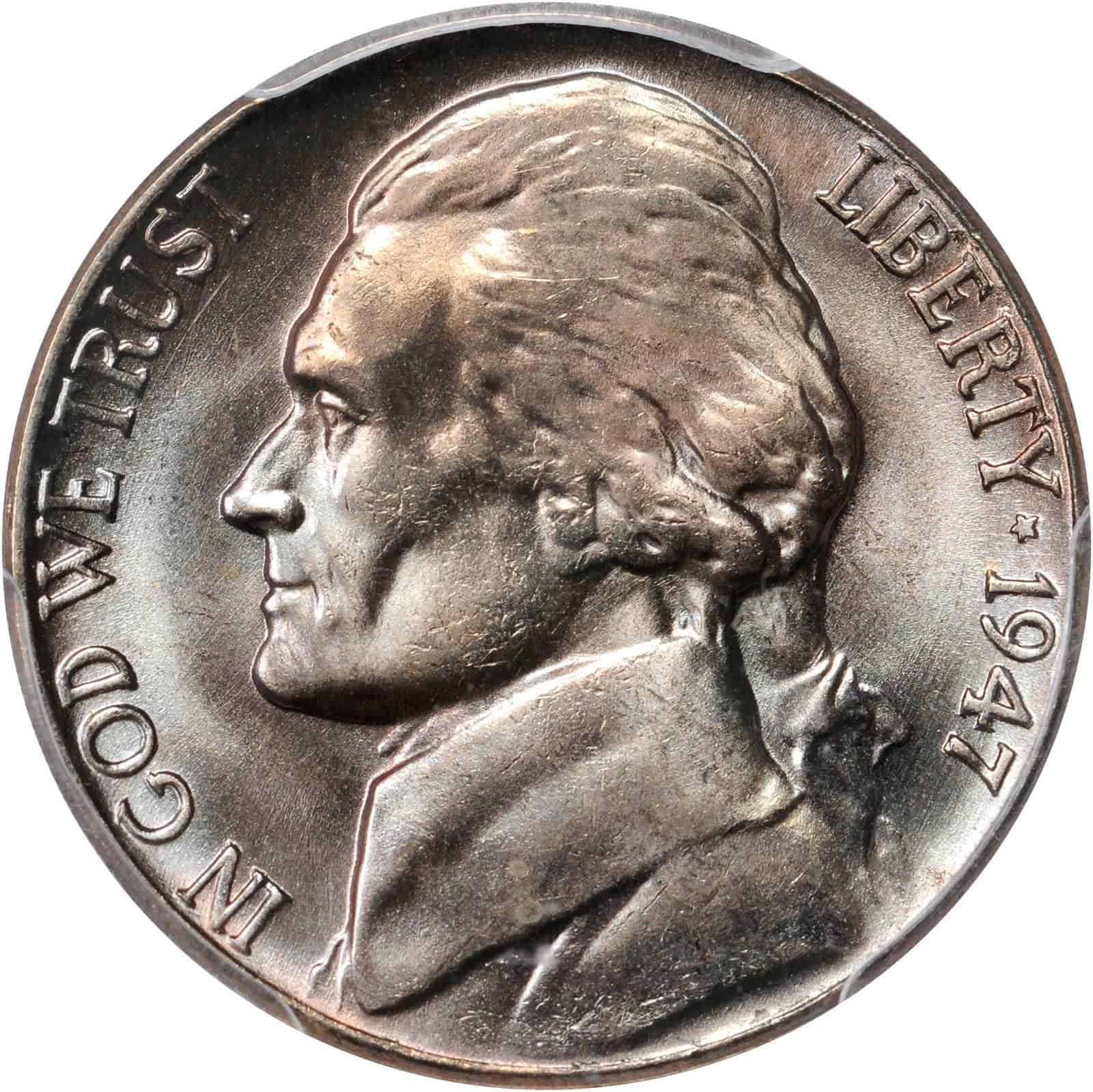 The obverse (front side) of the Jefferson Nickel features a bust-style portrait of Thomas Jefferson, facing left. As mentioned earlier, the design was created by Felix Schlag, a German immigrant who won a design competition for his work. The portrait showcases Jefferson’s strong jaw and prominent nose. His eyes gaze gently off, and the image seems to convey how Jefferson was an intelligent statesman who is open to new ideas and willing to listen, yet also bold and willing to lay his life on the line for his newly founded country.

The inscription around the edge of the coin reads “IN GOD WE TRUST” on the left, on in the right, there is the word, “LIBERTY,” followed by a tiny star (not a bullet point, as some may think), which adds to the patriotic design of the coin. Lastly, there is the date, “1947,” listed on the other side of the tiny star.

The Reverse of the 1947 Nickel 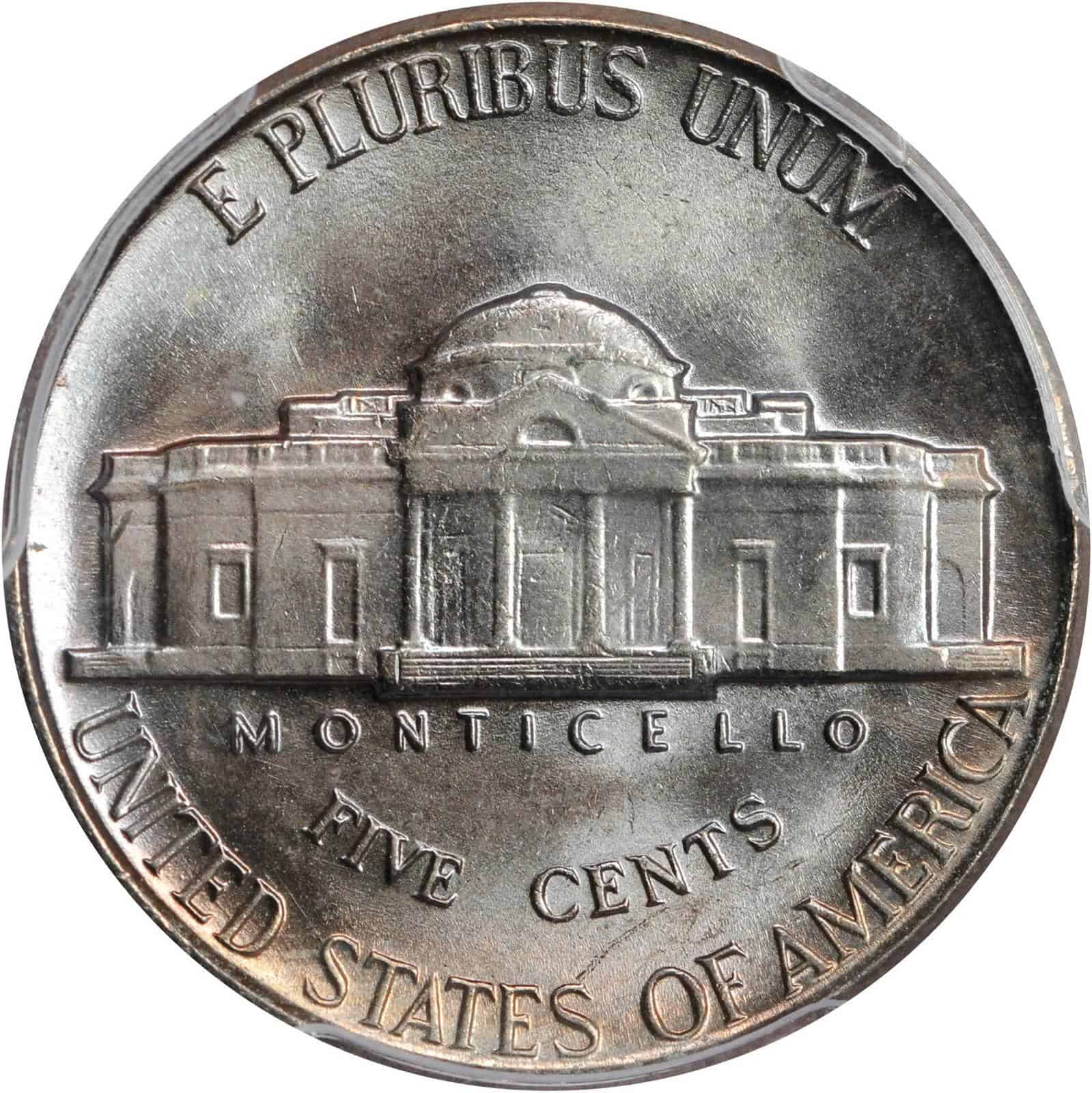 The reverse features Monticello, Jefferson’s estate. The image shows the stately and classical-style Monticello with two pillars framing its entrance and a dome at its center point. Above it is the phrase, “E PLURIBUS UNUM” (Latin for “Out of Many, One”)

Below the building are three inscriptions. In descending order, they include “MONTICELLO,” “FIVE CENTS,” and “UNITED STATES OF AMERICA.” If there is a mint mark, you will find it on the far right in the three o’clock position, beside Monticello.

Other Features of the 1947 Nickel

There are some more features that are important to note when looking at the 1947 nickel. These include its metal composition, mint marks, and size and weight.

The 1947 nickel was minted using an alloy that contained 75% copper and 25% nickel. This is the same alloy used in modern Jefferson nickels.

The 1947 nickel was minted at three different US Mints: Philadelphia, Denver, and San Francisco. Each one of these coins has a unique mint mark (D, S, or “no mint mark” for Philadelphia) located on the reverse side beside Monticello. These mint marks identify where in the US the coin was struck.

The 1947 nickel is 21.2 millimeters in diameter and weighs approximately 5 grams, making it easy to carry around in wallets and purses. The edge is smooth (as opposed to the textured edge of a quarter), and its thickness is 1.95 millimeters.

Now that we’ve discussed the features of the 1947 nickel, let’s take a look at its value. As it is a vintage coin, the 1947 nickel can be valuable depending on its condition, mint mark, and errors (which we will discuss later in this article).

If you are new to coin collecting, you may be wondering what “condition” means. It is a term used to describe a coin’s preservation. The higher the grade (preservation) of a coin is, the more valuable it will be.

Let’s look at the 1947 nickel value according to each of its US Mint locations. 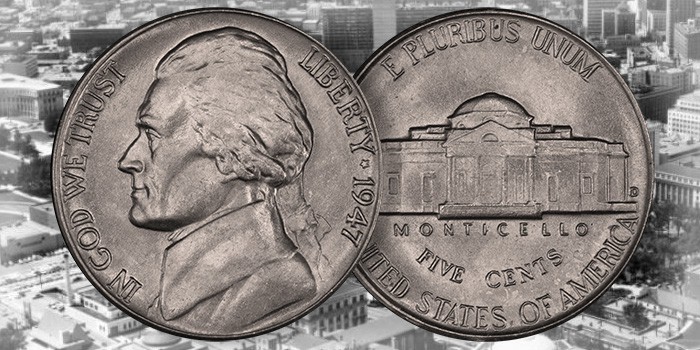 The 1947 “D” nickel is a bit more valuable than the Philadelphia nickel, having minted only 37,822,000 coins. In Good and Fine condition, it is still worth face value. In Extremely Fine condition, it can bring in $0.39, while an Uncirculated specimen can be worth between $1.02 and $13. 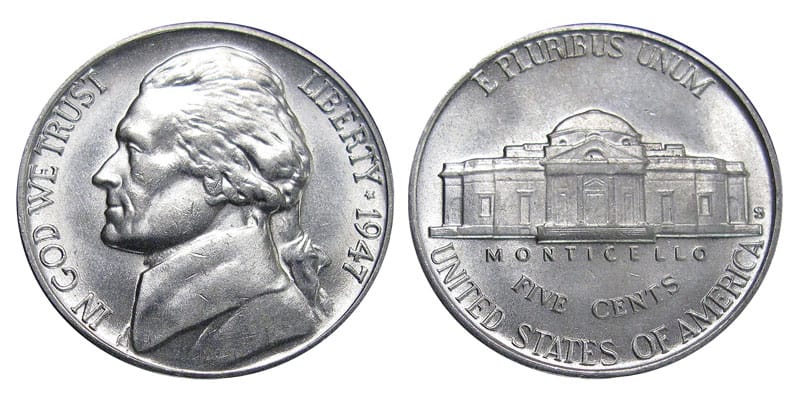 You may be wondering if there were any Proof nickels in 1947. Unfortunately, no. The US Mint did not begin mint Proof coins in 1947.

Lastly, another factor to consider when assessing the value of your 1947 nickel is any errors or varieties it may have. Errors are mistakes made during the minting process that can result in coins being mis-struck, double struck, or having other irregularities. These errors can sometimes add a great deal of value to your coin, and as such should be taken into consideration when pricing it.

Variety coins can include variations of the standard coin that are not necessarily minting errors.

Below are listed a few known errors and varieties for the 1947 nickel.

In 1947, the US Mint did not produce any Proofs, as we mentioned earlier. However, they did produce a special set of coins in Uncirculated condition. This set (of which only 500 were produced) included the 1947 Nickel from all three mint locations, and while they were sold in 1947 at $4.87, they are now valued at about $1,500 – definitely valuable to today’s coin collectors. 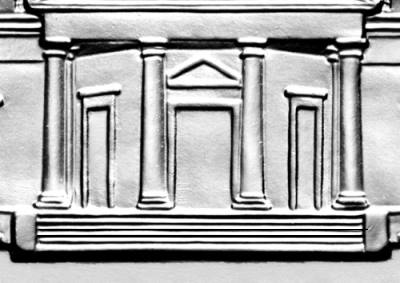 Again, this isn’t really an error so much as it is a (rare) really strong quality minting. Most 1947 nickels (as well as many nickels from other mintage years) were intended to have five full steps at the base of Monticello on the reverse, but they have since worn down.

A 1947 nickel with full steps is very rare these days. One Philadelphia nickel in nearly perfect condition sold at auction recently for an amazing $4,112.50! Another nickel, this time from the Denver Mint, also had full steps and sold for $4,700 at auction.

Lastly, there was a San Francisco 1947 nickel that had a full set of steps. Just a few years ago, it sold at auction for a whopping $14,950! Not bad for a five cent piece. 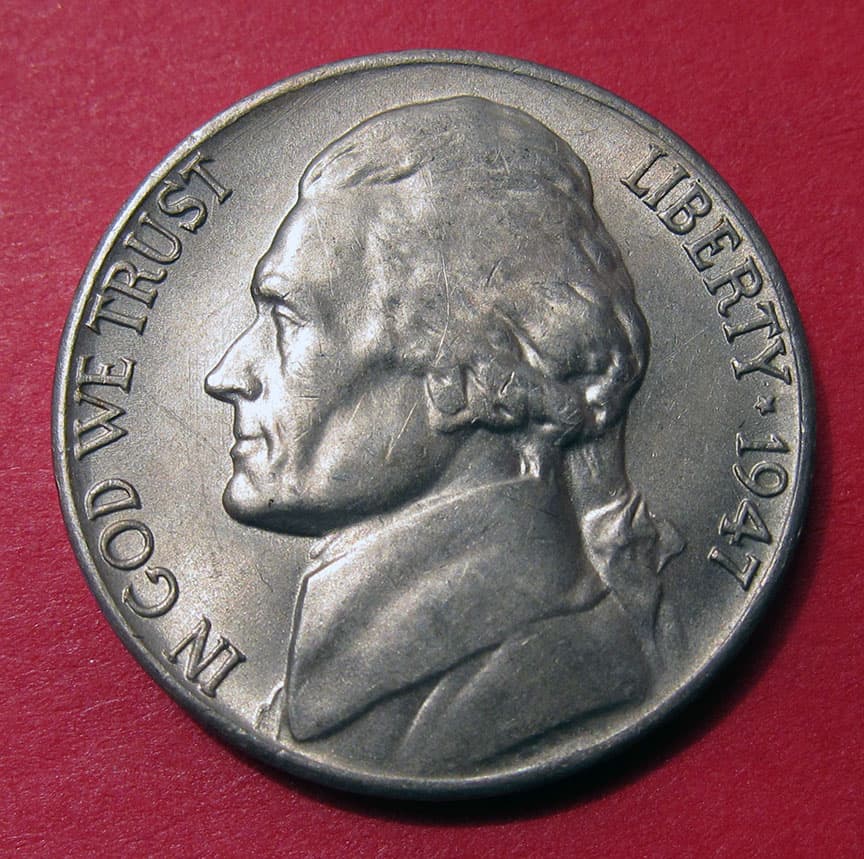 This error occurs when the die used to strike the coins does so twice, resulting in doubled lettering or designs on one side of a coin (or both sides sometimes). This error can sometimes add quite a bit of value to your coins if the error is significant enough. However, there aren’t any major double die errors on the 1947 nickel that we are aware of – these coins generally seem to be worth around $25 to $50.

This is another minting error, but it’s a bit more subtle than the doubled die error. This occurs when the punch used to place the coin’s mint mark into the die strikes twice, creating a blurry or doubled mint mark. 1947 nickels with this error are generally worth between $3 and $10.

A popular error for the 1947 nickel is the off-center error. This occurs when the planchet (which is a blank metal disc) isn’t exactly centered in the die, and as a result one or both sides of the coin has a portion of its design missing. The more the design is off center, the more the coin tends to be worth.

An error like that could be worth anywhere from $5 to $100, depending on the error’s severity.

You can usually find 1947 nickels in circulation, because they are still quite common. However, you might be able to find the more rare varieties or error coins at coin shops and online dealers, such as eBay. However, always make sure to use a reputable coin dealer for your purchases and do your due diligence in researching the authenticity of the coins you collect.

What is the History of the Nickel?

The first five-cent coin was actually struck in 1866. The denomination was created because after the Civil War, there was a lot of silver and gold hoarding happening, and the economy needed more coinage. It wouldn’t be known as the nickel until many years later, though.

Throughout its history, the five cent piece has been made from a variety of different combinations of metals, including copper, nickel, silver, manganese, and stainless steel.

Can You Clean Your Nickels Before Having Them Graded?

No. Professional coin graders or numismatists do not like to grade coins that have been cleaned, as even the slightest cleaning can impact a coin’s value.

If you wish to have your 1947 nickel graded, it is best to leave it in its current condition and consult with an expert for advice. It is always better to learn what to do first, before making the mistake of cleaning a coin incorrectly.

In summary, the 1947 nickel is a sought-after piece of US currency due to its age, historical significance, and potential rarity depending on mint mark and quality. Its value depends on these factors as well as any errors or varieties present – such as full steps or doubled dies – which could add a great deal of value to your coin.

If you’re unsure how much your 1947 nickel is worth, it’s best to consult with a numismatist or a professional coin grader for an accurate appraisal.  Good luck and happy collecting!

Do you have a 1947 nickel in your possession? Let us know about it in the comments below. We’d love to hear all about it.

I have a 1947 nickel there are no steps and no mint mark other that that it's in great condition.How much should I sell it for.