The wheat penny gets its name from the design on the reverse, two ears of wheat. It was the original form of the Lincoln penny, one of the longest running coins in the world. We’re going to look at just one of its mintages: 1946.

Read on to learn more about the 1946 wheat penny value, its history, and some of the interesting – and valuable – error coins out there.

History of the 1946 Wheat Penny

The penny struck in 1946 was one of those known as the “wheat penny”. It got its name from the reverse (the “tails” side) of the coin, which showed an image of two ears of wheat. It was the same design that had been used since Lincoln pennies were first minted back in 1909.

The Lincoln penny was the first to bear an image of a real person. Previous coins had depicted Lady Liberty in various forms on the obverse. The bicentenary of Lincoln’s birth in 1909 led to calls for this to change, and for the former president to be honored on the nation’s coinage.

The 1946 penny was the last of the wartime issues of the coin. The metal composition of the wheat penny had been changed in 1943, from copper to steel coated in zinc. The change released enough copper to make 1.25 million shells for the war effort.

But the steel pennies were short-lived, and in 1944 the coins returned to their previous copper appearance. All 1946 pennies were made of 95 per cent copper and 5 per cent zinc.

This was a slight change to the pre-war composition. Wheat pennies prior to 1943 had also been made of 95 per cent copper, but the remaining 5 per cent was a mixture of tin and zinc.

The wheat penny continued to be made until 1959. That year marked 150 years since Lincoln’s birth, and a new design was commissioned to celebrate the occasion. The ears of wheat were replaced with an image of the Lincoln Memorial in Washington DC.

Features of the 1946 Wheat Penny

The Obverse of the 1946 Wheat Penny 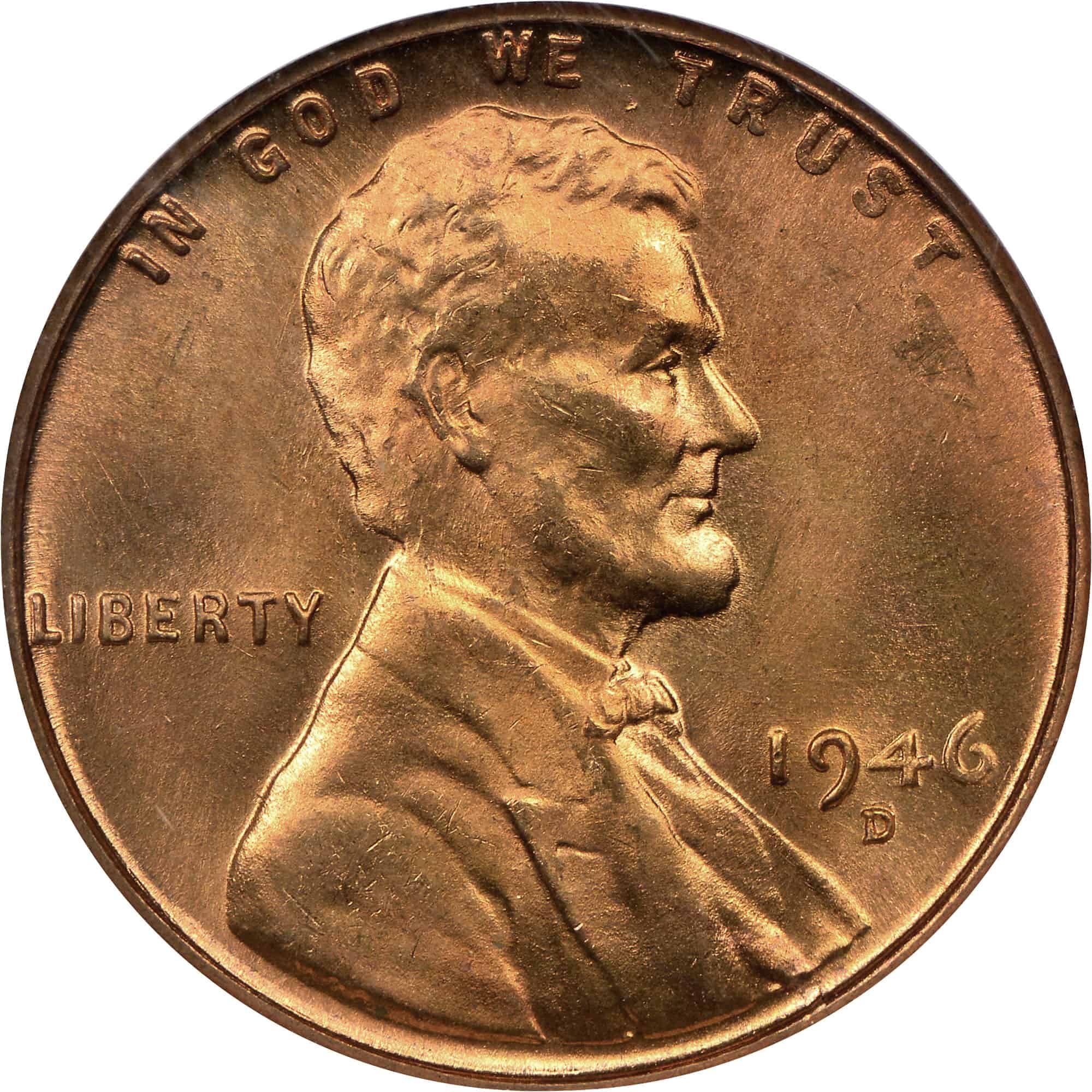 The obverse of every penny bears the same image that has adorned all Lincoln cents from 1909 to the present day. It is a head and shoulders portrait of Abraham Lincoln shown in profile and facing right.

Lincoln’s image was the work of a man called Victor David Brenner. Brenner is in turn thought to have based it on a photograph of the former president taken by one of the assistants of photographer Matthew Brady.

Brenner said he had imagined Lincoln as he would have looked when reading to children, believing that this would show the president at his most engaging.

Brenner had originally intended to sign the portrait, but this raised eyebrows at the mint. He offered instead to replace his signature with his initials, which would appear on the reverse.

Even that, though, was to cause controversy. Production of the 1909 penny was halted because of criticism over the size of Brenner’s initials, and fears that they constituted “advertising”. Despite the artist’s protests, they were removed.

But they were reinstated in 1918, this time on the obverse. Look closely at an 1946 wheat penny, and you can see them discreetly tucked away along the lower edge of Lincoln’s shoulder.

Also on the obverse are the motto “In God We Trust”, which appears above Lincoln, and the word “Liberty” to the left of his portrait. To the right is the date. And if the coin was minted in Denver or San Francisco, a “D” or an “S” will appear beneath it.

The Reverse of the 1946 Wheat Penny 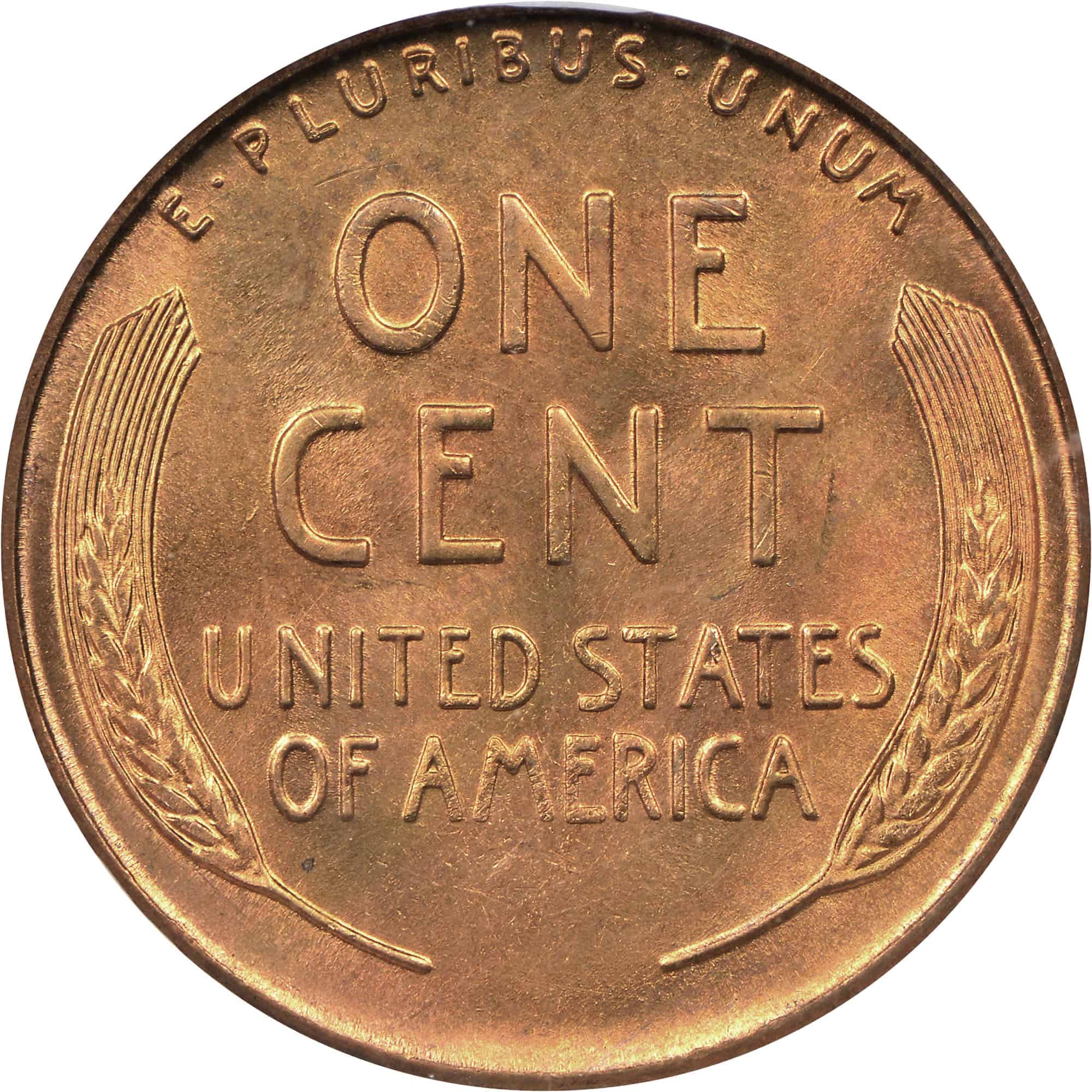 The 1946 wheat penny has the eponymous ears of wheat on its reverse. The simple design was also the work of Brenner, but it wasn’t his first attempt.

His original suggestion had been the branch of a tree, a design very similar to French coins of the same period. But the Mint Director, Frank A. Leach, told him it was unsuitable. Brenner went back to the drawing board, and came up with the classic image of two ears of durum wheat.

(Wheat sheaves were also suggested for the 2010 Lincoln penny. In this case, the design featured thirteen of them bound together in a ring. But the design was considered to be too close to German coins of the 1920s. The final version bore the image of what’s known as the “union shield” instead.)

Around the top of the coin, the words “United States of America” follow the curve of the edge. Beneath them is the motto “E pluribus unum”. It’s Latin for “From the many, one” and refers to the union of the states as a single country.

Curving along the lower edge of the reverse is the denomination, written as “One cent”.

Other Features of the 1946 Wheat Penny

Copper coins like the 1946 wheat penny are graded according to their color. When brand new, copper has a rich red tone. But over time that changes to brown, as the coins are handled and exposed to oxygen in the air.

All other things being equal, red coins are more desirable to collectors than their equivalents graded brown or red-brown. To be graded red, a coin must have a red tone over at least 95 per cent of the surface area of both sides.

Coins graded brown are brown over at least 95 per cent of their total surface area. And if the amount of red or brown is somewhere between those extremes, the coin will be graded red-brown.

The grading is coded with two letters in the coin description: RD for red, RB for red-brown, and BN for brown.

This YouTube video from CoinOpp looks at how to grade Lincoln pennies, including their color. 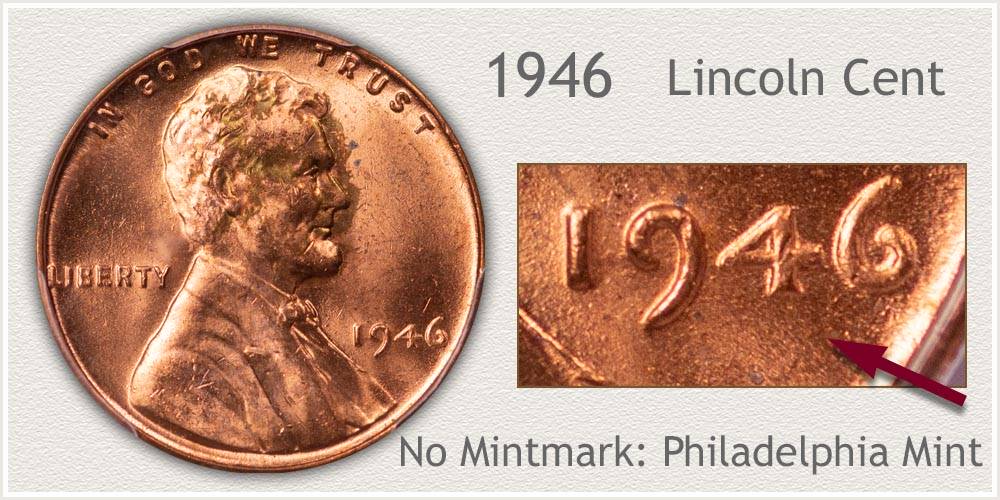 1946 pennies were struck in larger numbers at Philadelphia than at any other mint facility. That makes them very easy to find in circulated grades. And even though they’re almost 80 years old, they’re not worth much more than their face value.

You can tell if your 1946 wheat penny is from Philadelphia by looking for a mint mark. That’s a letter that appears beneath the date on the obverse. If there’s no letter, that means your penny was struck in Philly.

Uncirculated 1946 wheat pennies are the ones that are worth more. The value can vary hugely, depending on color and condition.

The least valuable are generally brown coins. But all colors are rare at MS65 and above. And the finest examples of brown wheat pennies can still be worth good money. A 1946 wheat penny graded MS67 BN by the PCGS sold on eBay in 2021 for $736.

Since then, however, more examples of highly graded coins have come to light, and values have declined. Today, the PCGS population of 1946 MS67 RD wheat pennies is 41. And the PCGS value for a coin at this grade is $775. 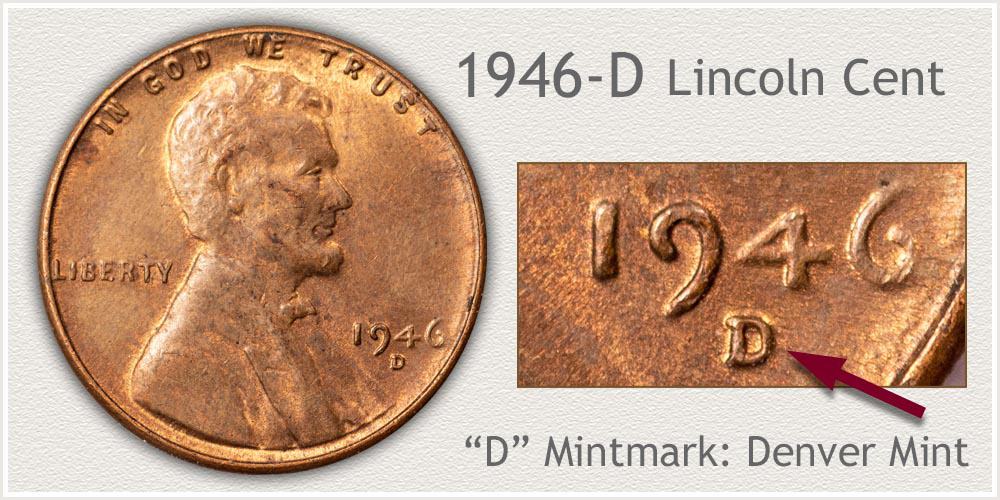 Fewer pennies were minted at Denver than Philadelphia. But the numbers were still large – over 315 million. So circulated coins will usually be worth only their face value.

In lower mint state grades, a 1946 D wheat penny will be worth anything from a couple of dollars to about $20. Even at MS65, the lowest “gem quality” grade, the PCGS pegs its value at only $24.

Brown and red brown coins are put forward for grading less often. That’s because it’s less likely that the value will warrant the grading fee.

The auction record for a 1946 red-brown Denver wheat penny was set in 2021 on eBay. The coin was graded MS67 RB, the only example graded at that level by the PCGS, with none finer. Even so, it sold for a relatively modest $145.

San Francisco is the rarest mint mark among 1946 wheat pennies. But with almost 200 million struck, they’re not scarce in circulated grades.

Uncirculated coins are worth more than their face value. Prices at most grades, however, will still be in reach of many collectors.

The highest price ever paid at auction for a regular strike 1946 S wheat penny was $6,169. That was for a coin graded MS67+ RD and sold in 2016. It was particularly interesting to collectors because it was a variety known as a “Trumpet Tail S”.

Some of the 1946 wheat pennies struck in Denver had the mint marks re-punched. You can see the faint outline of the original “D” mint mark just above the new one. 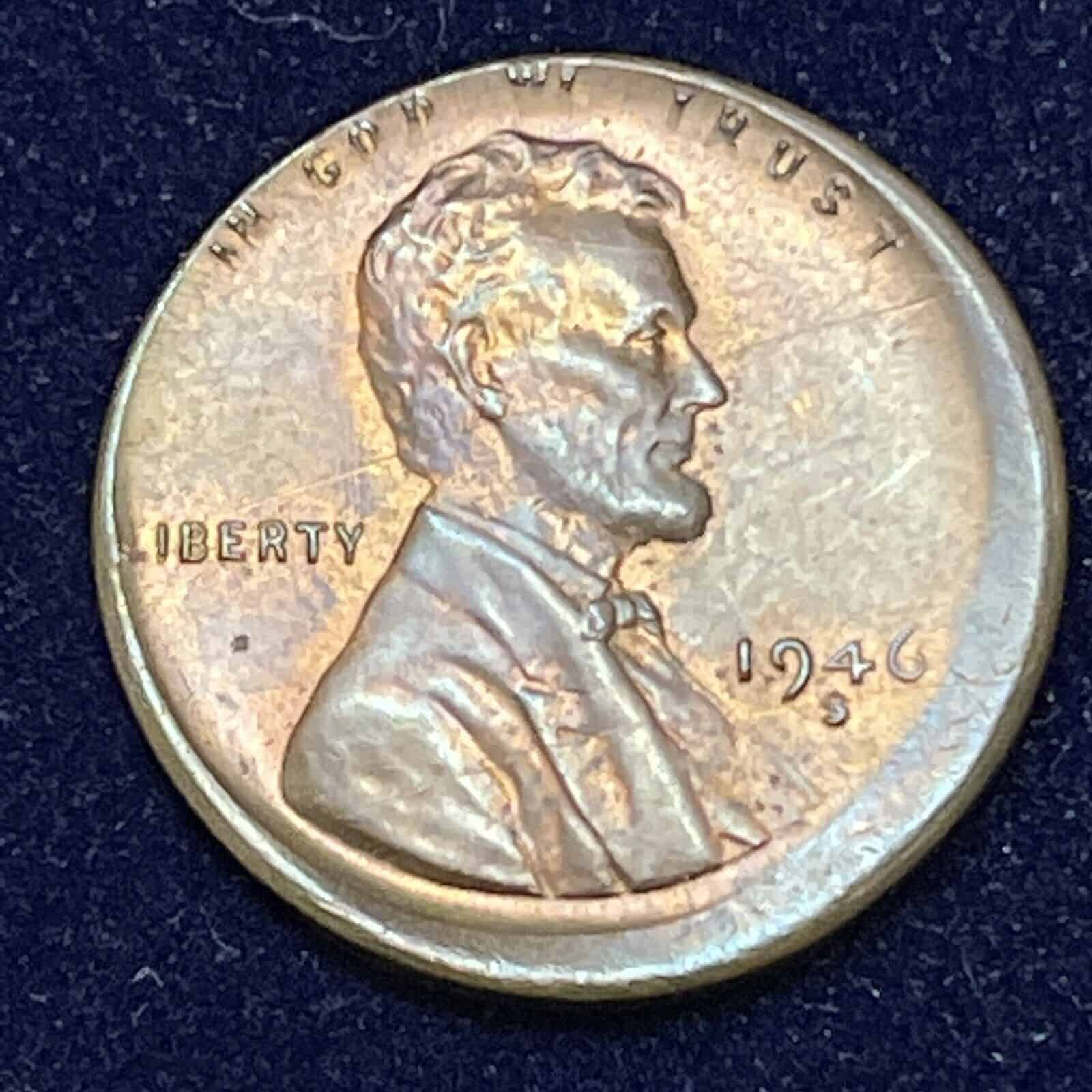 Mint state examples in higher grades can fetch more. Another 1946 wheat penny from Philadelphia, struck 10 per cent off-center and graded MS64 by the PCGS, sold for $150.

In some cases, the mint mark on the coin was changed. A number of 1946 pennies have an S punched over the D. Even circulated examples of this coin can be quite valuable.

Very rarely, coins are struck on the wrong type of planchet. This happened to one 1946 wheat penny struck in Denver. Instead of the copper and zinc 1-cent planchet that should have been used, it was struck on a dime planchet instead.

The resulting coin was graded at AU50 and was damaged into the bargain. But the rarity of the error meant that it still sold for over $400.

This YouTube video from Couch Collectibles shows you all these error coins, as well as fine examples of other valuable 1946 wheat pennies.

Despite their age, most 1946 wheat pennies aren’t rare. Over 1.5 billion of them were struck, so even with the passage of time, they’re still easy to find.

There are some rare examples, however. The coins in the very best condition are, by definition, rare. And there are a number of interesting error coins too, some of which are valuable.

Most 1946 pennies are only worth their face value. But coins with an attractive red color and in excellent condition can be worth much more. While prices have declined as more fine quality coins have come to light, the best examples can still command many hundreds of dollars.