Jefferson nickels are 5-cent coins that have been used for over 80 years and are among the most famous US Mint coinage. Their design includes the profile of the 3rd American President, Thomas Jefferson, on the obverse.

Even though the US Mint produced nickels from 1938 to the present, those from the first decade are the most attractive to collectors. Typically, the 1946 nickel value depends on the condition, mint mark, and existing errors and variations.

History of the 1946 Jefferson Nickel

In 1938, the US Mint marked the 25-year mandatory mintage for the Buffalo nickel. It finally became possible to replace that coin with a problematic design without an act of Congress.

In January 1938, the US Mint announced an open competition for a new coin look with a $1,000 prize fund. Over 400 artists applied for the contest.

As the bicentennial of Jefferson’s birth approached, it was natural to choose the new design featuring a Jefferson portrait on the obverse. The competition winner was the German emigrant Felix Schlag, who created the winning design in just four weeks.

A sculptor found inspiration for his work in the President’s bust displayed in the Boston Museum of Fine Arts. Jefferson’s historical home, Monticello, became a theme on the reverse.

Initially, the original reverse design showed Jefferson’s Monticello mansion from an angle. However, the commission members didn’t like this conceptual solution and the writing style the sculptor used.

After these objections, Felix Schlag adapted the original design. He changed the letters font in inscriptions, and the viewing angle of Monticello was from the front. Interestingly, the original design didn’t include the author’s initials until 1966.

After those first changes, the Jefferson nickel appearance has not undergone any significant changes over the years. However, the US Mint made some changes in its composition during WWII.

Because of the war industry’s need for nickel, it was necessary to find a solution to reduce its use. Even though Congress approved nickel of 50% copper and 50% silver in March 1942, the alloy containing 56% copper, 35% silver, and 9% manganese performed better.

Since 1946, the US Mint has reoriented to the pre-war composition of 75% copper and 25% nickel marking nickels without this metal as war series.

Features of the 1946 Jefferson Nickel

Like other coins from the period, most of the 1946 Jefferson nickels were in circulation. For these reasons, most are pretty worn out, show visible signs of age, and are uninteresting for serious collectors.

The obverse of the 1946 Jefferson nickel 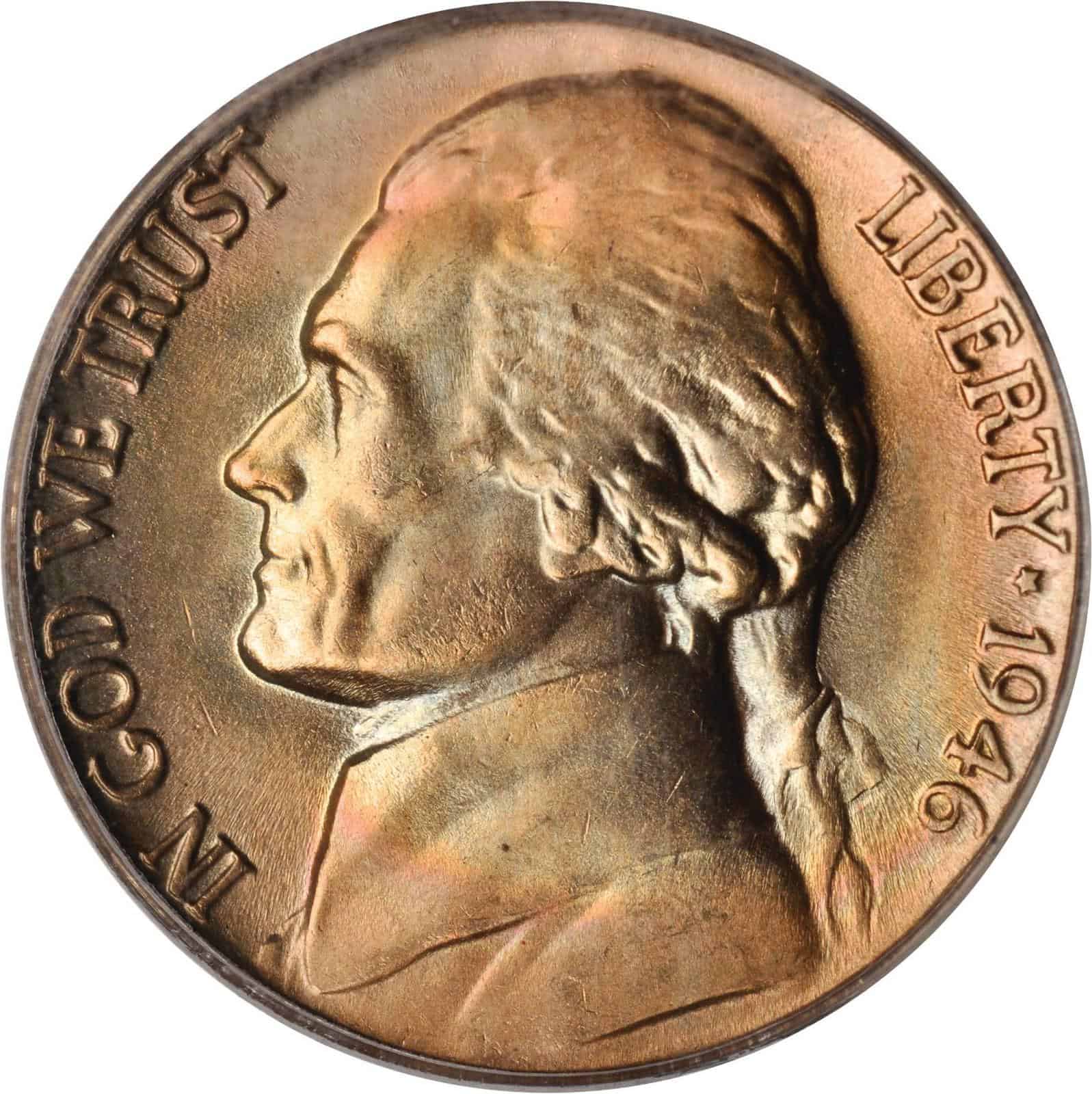 On the nickel’s obverse, you can recognize President Thomas Jefferson’s profile turned to the left and occupying the coin’s central part. The image shows him with a characteristic hairstyle for that period.

You can also see two inscriptions on the obverse. The phrase IN GOD WE TRUST is along the left coin rim, in front of Jefferson’s profile. You can also see the word LIBERTY and the minting year stretched along the right rim and separated by a small five-pointed star.

The reverse of the 1946 Jefferson nickel 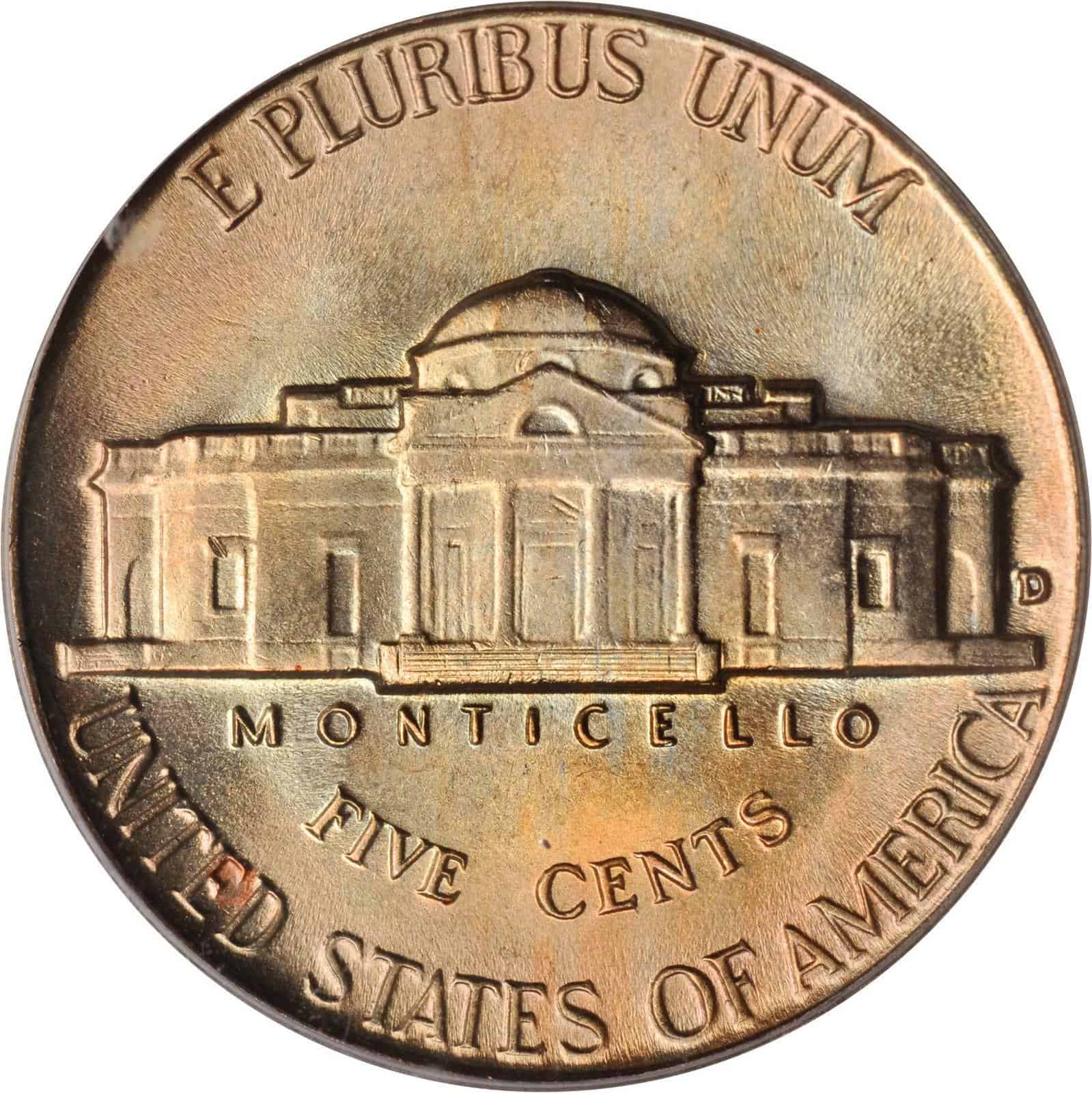 In the reverse central part, you can notice Jefferson’s mansion Monticello, built by his own design inspired by the Italian Renaissance. Even the name Monticello is the Italian term for a hill.

Interestingly, Schlag showed this monumental building precisely with numerous details, including the octagonal dome and stairs to the building entrance. On the upper rim above the Monticello dome is the Latin saying, E PLURIBUS UNUM.

You can read the building name, MONTICELLO, under the steps, while you can find the mint mark on their right side. The inscription UNITED STATES OF AMERICA runs along the lower rim, with the FIVE CENTS denomination above it.

Other features of the 1946 Jefferson nickel

The US Mint struck nearly 220,000,000 Jefferson nickels in 1946 in three mints. All three mints in Philadelphia, Denver, and San Francisco had a high mintage, resulting in a low value of circulated pieces. 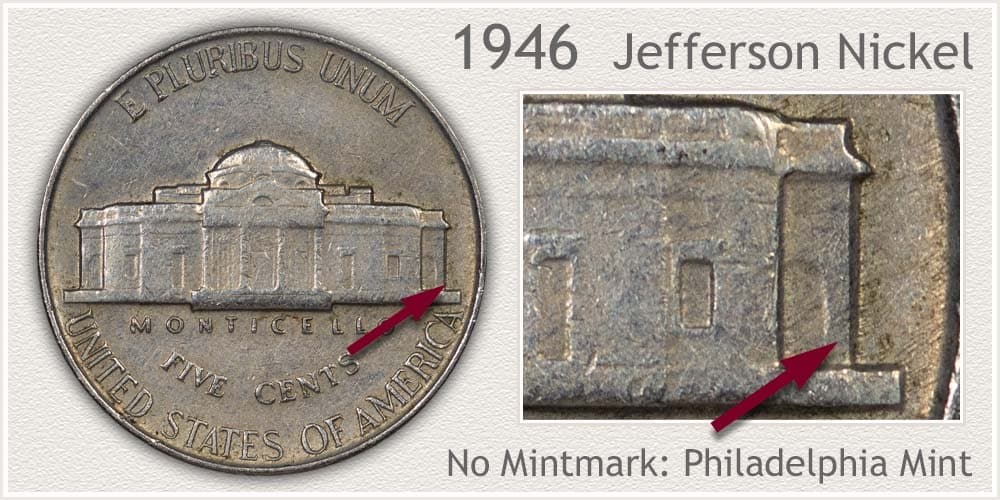 Typically, the Philadelphia mint had the largest mintage of 1946 Jefferson nickels, precisely 161,116,000 coins. That number exceeded the total circulation of the other two mints by more than 100,000,000.

You can see that there is no mint mark on these pieces, and that is how you can distinguish them from other nickels struck in the same year. Most of these coins were released into circulation, lowering their value on the coin market.

Most specimens cost a modest 7 to 10 cents, which barely exceeds their face value. Even coins in the mint state doesn’t reach any significant prices, and you can buy most for under $20.

On the other hand, some well-preserved nickels reach high prices at auctions. For instance, one collector paid $1,763 for the 1946 MS 67 Jefferson nickel.

The other coin with desirable Full Steps reached a significantly higher value. The 1946 FS Jefferson nickel in an MS 67 grade was paid an impressive $8,812.50 at an auction. 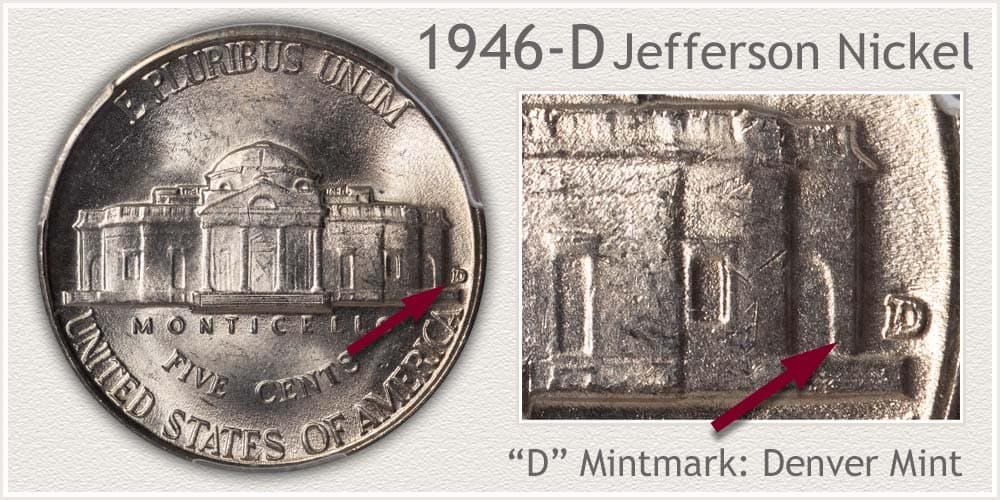 The Denver mint minted just over 45,000,000 Jefferson nickels in 1946, which was the second largest mintage that year. All these pieces came with the mint mark D on the reverse.

Although this mintage is significantly lower than the Philadelphia one, it doesn’t affect these coins’ value on the market. You can find a circulated specimen in average condition for 10 cents, while an uncirculated piece with MS 67 ranking is worth only $13.

Nevertheless, some nickels reach significant prices at auctions. One collector bought the 1946 D MS 67 Jefferson nickel for $1,265, while a specimen with the same grade and FS mark was sold for a whopping $8,625. 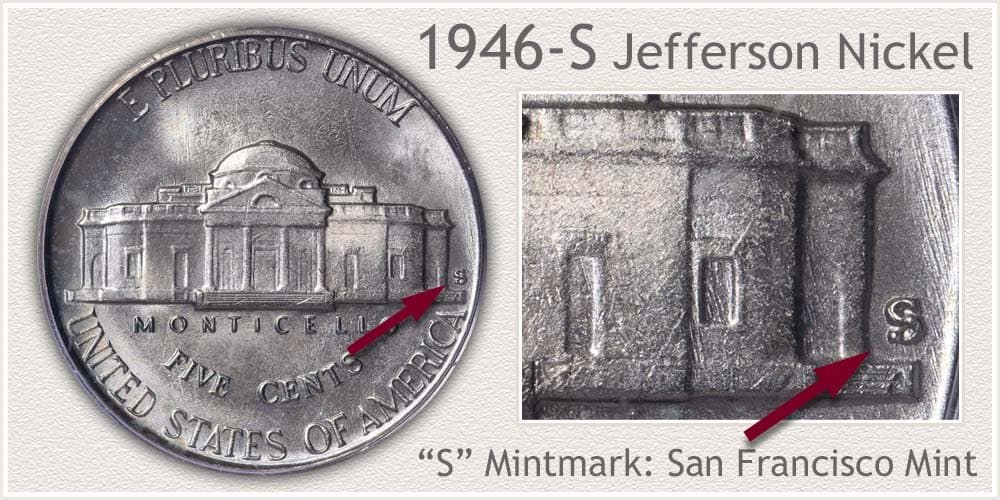 The 1946 Jefferson nickels struck in the San Francisco mint are the rarest in the series because of the lowest mintage of only 13,560,000 pieces. You can effortlessly recognize them by the S mint mark on the reverse.

However, the low minting number doesn’t significantly affect these specimens’ value on the current coin market. You can find a circulated nickel in average condition for a price ranging from 35 to 50 cents.

Pieces in the mint state can be worth a bit more, and you can get $13 for the one with MS 67. Often, these amounts are significantly higher at auctions.

Various errors can occur during minting, and coins with imperfections also exist among 1946 Jefferson nickels. Typically, such specimens often have a high value on the coin market.

The Full Steps is a gradation mark used for rare coins with five or six visible steps at the Monticello entrance. Such pieces have clearly visible steps without contact marks, strike weakness, or problems with the planchet.

Keep in mind that Jefferson nickels Full Steps have a higher value than regular coins. For instance, you can get $8 to $6,600 per piece, depending on its condition and the mint mark.

This error typically occurs when the die strikes the same coin twice or thrice. On the 1946 nickel, this error is sometimes visible on the obverse as a doubling in Thomas Jefferson’s eye. However, DDR is more common, and you can see this error best on the inscriptions MONTICELLO and FIVE CENTS.

You shouldn’t expect a significant profit by selling coins in average condition since most cost only 20 to 50 dollars. On the other hand, a specimen in an MS 67 grade can bring you as much as $2,500.

This error occurred when the D mint mark was struck the wrong way or under an incorrect angle. In such a case, you can see the new D over the first one as a result of trying to correct the error. Since this imperfection is rare, you can expect to get $630 to $2,500 for such a coin.

Nickel struck on a silver planchet

During WW II, the US Mint minted nickels from silver due to the military industry’s need for nickels. After the end of the war, minting coins made of copper and nickel started again.

However, a few silver planchets remained in the system so you can find 1946 Jefferson nickels containing some silver. Their value is typically high and can reach several thousand dollars.

The off-center 1946 Jefferson nickel is the most common error you can find, making these pieces relatively inexpensive. Most are only 1% or 2% off-center, and many collectors consider them technical errors without value.

Die crack error coins are caused by a damaged or old die, making unusual pieces fascinating to collectors. You can find those with a fracture line appearing on the coin surface or with unusual bumps formed because of the cracked die. Die cud is a crack on the coin rim that can bring you over $100 in most cases.

FAQ about the 1946 Jefferson Nickel

What makes a 1946 Jefferson nickel rare?

With a mintage of nearly 220,000,000 pieces, the 1946 Walking Liberty nickel is not rare, making its value insignificant. However, some of these coins, particularly errors, are considered scarce.

Which 1946 Jefferson nickel is worth a lot of money?

How much is 1946 No Mint mark Jefferson nickel worth?

Due to a high mintage in the Philadelphia mint this year, the 1946 Jefferson nickel value is pretty low. You can find a coin in average condition for as little as 10 cents, but some pieces in the mint state can be worth about $75.

What is the rarest 1946 Jefferson nickel?

The 1946 nickel composition was copper and nickel, but several specimens were struck on a silver plate by error. Only four such silver nickels have been certified and are worth tens of thousands of dollars.