To many outside the US – and within it too – the dime is a puzzling coin. How much can it buy, how does it stay so shiny, and why is it so small? We’ll answer all this and more as we explore and verify the 1946 Dime Value. It’s a popular collector’s coin, so let’s get started!

A Vietnam Vet named Mike tells an interesting childhood story on YouTube. When he was little, his big brother would play this ‘prank’ to show his friends how dumb his little brother was. He’d routinely offer Mike a nickel and dime in public, telling him to choose one. Mike always picked the nickel, seemingly because it looked bigger, then the other kids laughed.

But Mike was way smarter than they realized. As he later admitted, “If I took the dime, I’d never get another nickel!” Still, this question muddles lots of little kids, and confuses adults too – why is a 10c coin smaller than a 5c coin? The clue is in their history. See, dimes were initially silver, intended as one-tenth the value of a Silver Dollar. But nickels are base metal.

To ensure their melt value didn’t surpass their face value, they made the coins extra thin and rather tiny. While it’s now a clad coin, it’s still the smallest and slimmest of all US circulating coins! The word dime was once spelled disme, with a silent ‘s’. It’s a French for tithe or tenth. From 1796 to 1837, all dimes were 89.24% silver + 10.76% copper, and 18.8mm in diameter.

Then in 1837, the Seated Liberty Dime was introduced at 90% silver and 10% copper. To stop it from exceeding its face value, they reduced the coin size to 17.9mm across and 1.35mm thick, the size it still uses today. After high silver prices caused the coin shortage of the 1960s, dimes, quarters, and half dollars switched to the Johnson Sandwich (91.67% copper, 8.33% nickel).

The Size and Shine of the Roosevelt Dime

To ensure the outside of these formerly silver coins looked equally authentic, the core of the coins was pure copper while the outer layers were 75% copper and 25% nickel. Today, only proof coins are pure silver, sold directly to collectors at higher rates. But some people trade old pre-1965 Silver Dimes as bullion based on their melt value. People call them ‘junk silver’.

The 1946 Dime was the first Roosevelt Dime, coined to honor Franklin Delano Roosevelt, or FDR, the 32nd President of the United States. He was placed on the coin soon after his death in 1945, and the mint selected the 10c denomination due to his famous anti-polio initiative, the March of the Dimes. FDR got polio in 1921 and ruled the nation sitting in a wheelchair.

But most of the country – and the world – didn’t know this. His team worked hard to keep it hidden. During speeches, he used a sturdy podium for extra support, with an aide or one of his sons standing beside him. His support staff often stopped the press from taking photos of the wheelchair. And the public wasn’t allowed to see him entering or exiting cars and trains.

Also, his placement on the coin did cause controversy. Some people felt his presidential achievements didn’t match the other presidents featured in US coins at the time. These other ‘circulating presidents’ were George Washington on the Quarter (25c), Thomas Jefferson on the Nickel (5c), and Abraham Lincoln on the Penny (1c). But the mint prevailed so he stayed.

Sinnock Controversies on the FDR Dime

This coin was designed by John Ray Sinnock, the Chief Mint Engraver from 1925 to 1947. People thought his initials, JS, were secret soviet symbols for Joseph Stalin! But according to mint records, Gilroy Roberts did most of the work on the coin. He was the assistant engraver at the time and later succeeded Sinnock as Chief Engraver, designing the JFK Half Dollar.

Still, the mint had to officially deny this claim, which popped up again when the initials JRS appeared on another Sinnock coin, the Benjamin Franklin Half Dollar. That wasn’t the end of his woes though. He was accused of plagiarising his FDR depiction from Selma Burke, a famous African American sculptor. He denied it, but Burke insisted on it until her death.

While other coins have their denominations written in dollars or cents, the dime just says One Dime, and that sometimes puzzles foreigners who have no idea how much this tiny, shiny coin is worth. Also, while earlier coins used the same visuals for all denominations, modern coins each have their own design, which can legally be changed after 25 years of use.

Before we discuss the characteristics of the 1946 Dime, let’s get familiar with the terms. Coins are minted on blanks called planchets. The heads side of a coin is called its obverse and the tails side is called its reverse. The raised rim at the border is called a collar and the flat side is called the edge. The words on a coin are referred to as either mottos or legends.

The images on a coin e.g. the portrait, bird, animal, etc. are called the device, and the field is the surrounding background. The field is often blank, but on older coins (and National Park Quarters), it might have a landscape, sun rays, or something similar. Also, on most coins, the initials of the designer are placed somewhere subtle along with the mint mark and mint year. 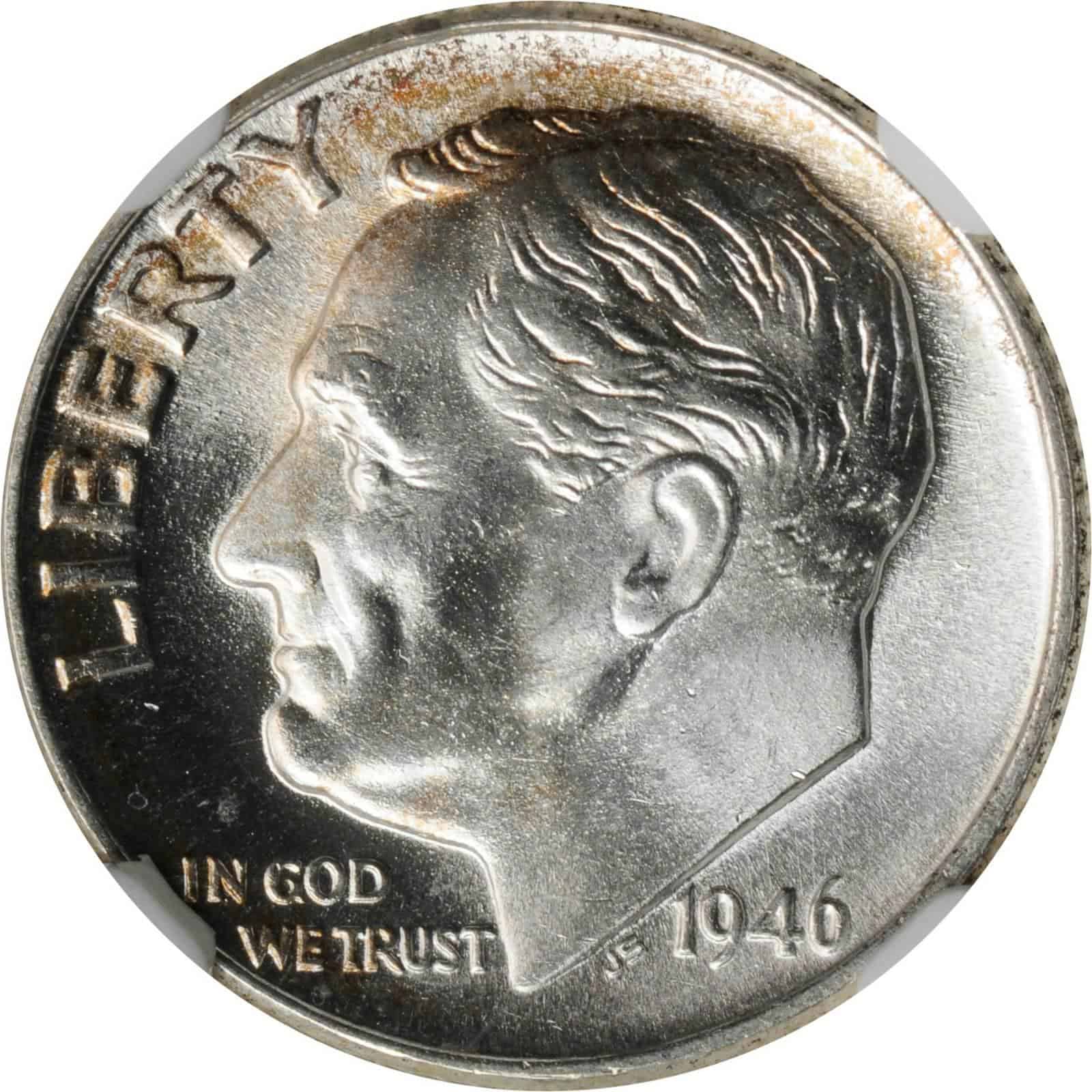 The obverse (heads side) of the 1946 Dime has a portrait of Franklin Delano Roosevelt, the 32nd US President. He faces left on the coin, with the legend Liberty in front of his face. The motto In God We Trust is under his chin on the lower left side of the coin. On the lower right, the designer’s initials, JS, appear below FDR’s neck cutoff. They’re followed by the mint date. 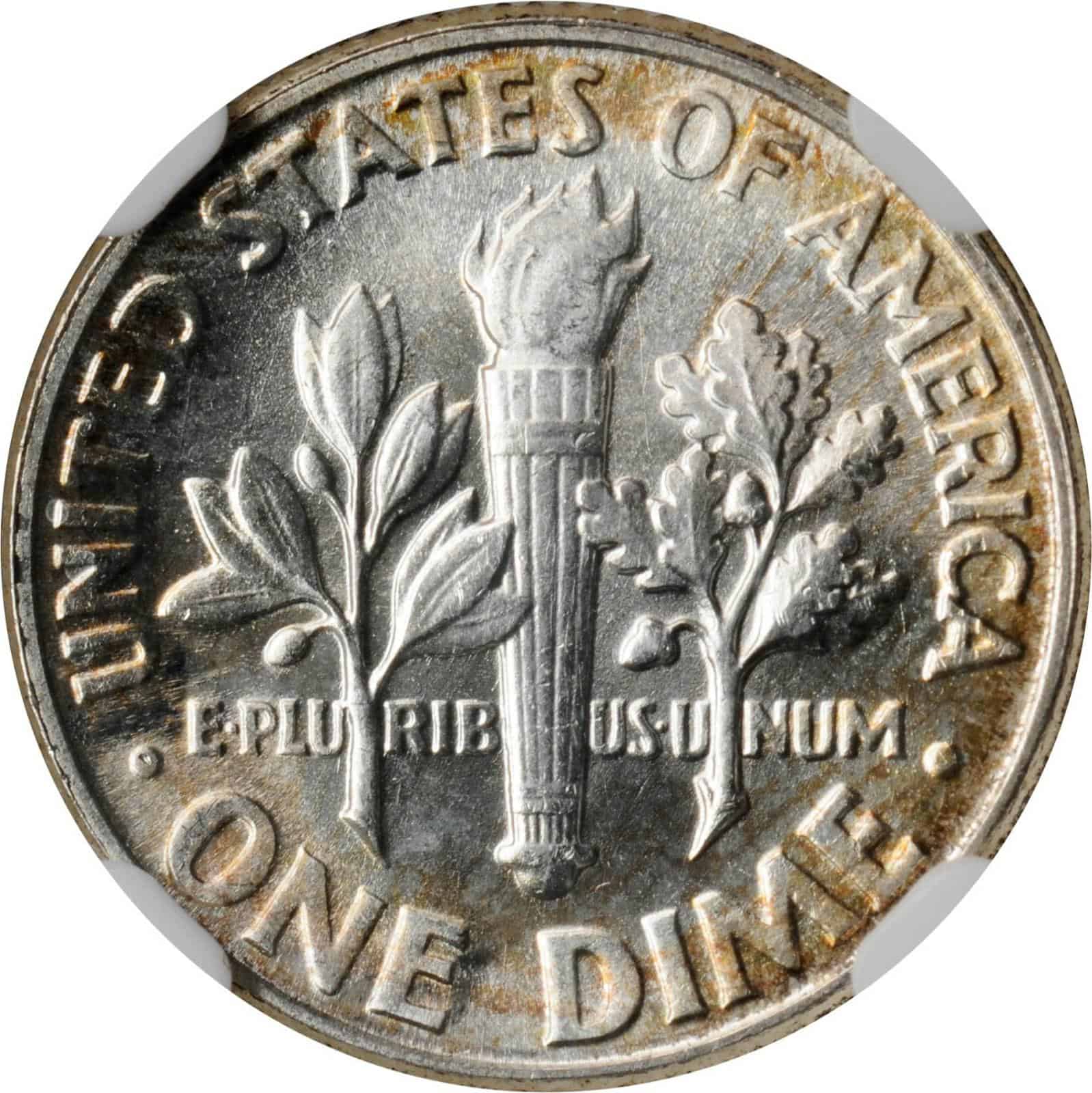 The reverse (tails side) of the 1946 Dime features an olive branch, a flaming torch, and an oak branch for peace, liberty, and strength. The motto, E Pluribus Unum, intersperses the three devices, with the mint mark on the left side of the torch. The legends run along its entire rim, with United States of America on the upper side and One Dime on the lower side.

Other Features of the 1946 Dime

The 1946 Dime is 90% silver and 10% copper. It’s 17.91mm in diameter, 1.35mm thick, has a reeded edge, and weighs 2.5g, making it the smallest and slimmest circulating coin. The sizing was deliberate, to keep its melt value low. Today’s dimes have the same dimensions, but because they’re clad, they weigh 2.268g, so they’re still the thinnest and tiniest US coins.

Over the past 40 years, US coins had been designed by external sculptors via public contests. But this was a rush job, so Sinnock designed it, although his samples were rejected several times, and some folk wanted previous coin designers like Fraser and Weinman to have a go. Still, the FDR Dime was released on January 30, 1946, the day FDR would have turned 64.

Three main factors determine the investment and/or resale value of a coin – the mint date, rarity, and condition. Regarding coin condition, dimes are sometimes graded FB which means Full Bands. This refers to the bands on the torch or the fasces. If you can clearly see their 2 to 3 stripes, that’s FB. You might also see the grade FT by NGC. It means Full Torch. 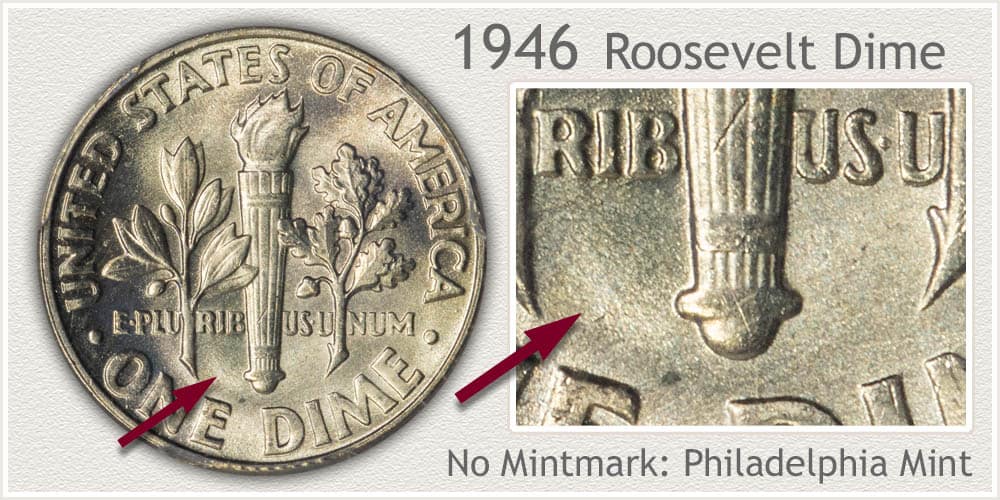 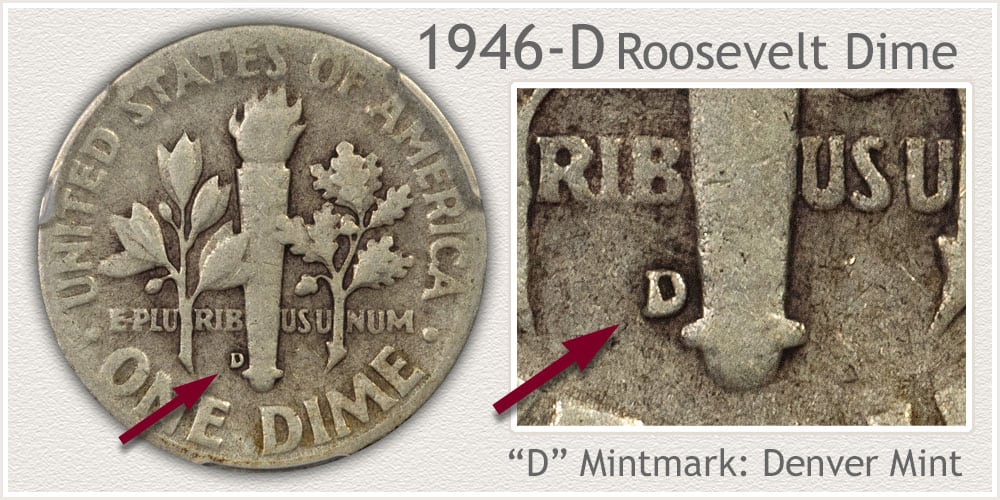 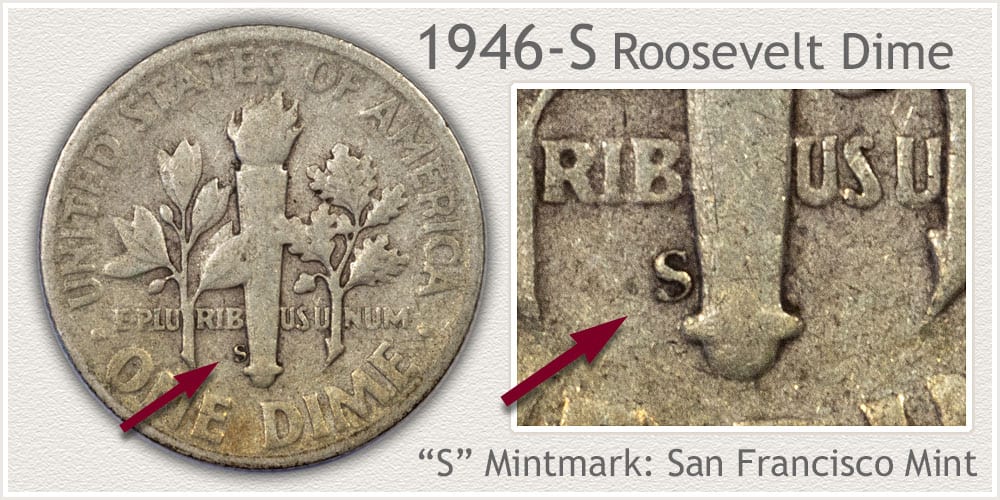 Errors can greatly augment the price of any coin, so it helps to understand how they happen. A coin starts life as a prototype made of epoxy, plaster, and rubber, before being machined onto a master hub. This hub is struck onto a steel master die, which makes the working hub, and later the working dies. Working dies strike planchets into circulating coins and proofs.

All these phases involve multiple obverse and reverse strikes, and if the target moves around between strikes, you can get errors like doubling, tripling, off-centers, etc. A coin might also be struck on the wrong planchet, or on a coin that has previous designs if it already passed through the mint. Let’s explore some common pricy errors you can find on the 1946 Dime.

A re-punched mint mark or RPM is a doubling or tripling error on the mint mark. Other coin elements are machined onto the planchet, but mint marks are added by hand at the end. So if the person holding the puncheon is unsteady or unsure, the second or third strike may be a bit askew. RPMs are written as D/D meaning D over D. In mint states, they’re $50 to $150.

We’ve just talked about RPMs, and this coin has an S over S, written as S/S. But since this coin has another error as well, it’s quite expensive! The second flaw is a DDR or doubled-die reverse. It happens when the die shifts between die strikes, causing a doubling error that gets transferred to every coin made with this die. In MS 67+ FB, these two errors are worth $720. 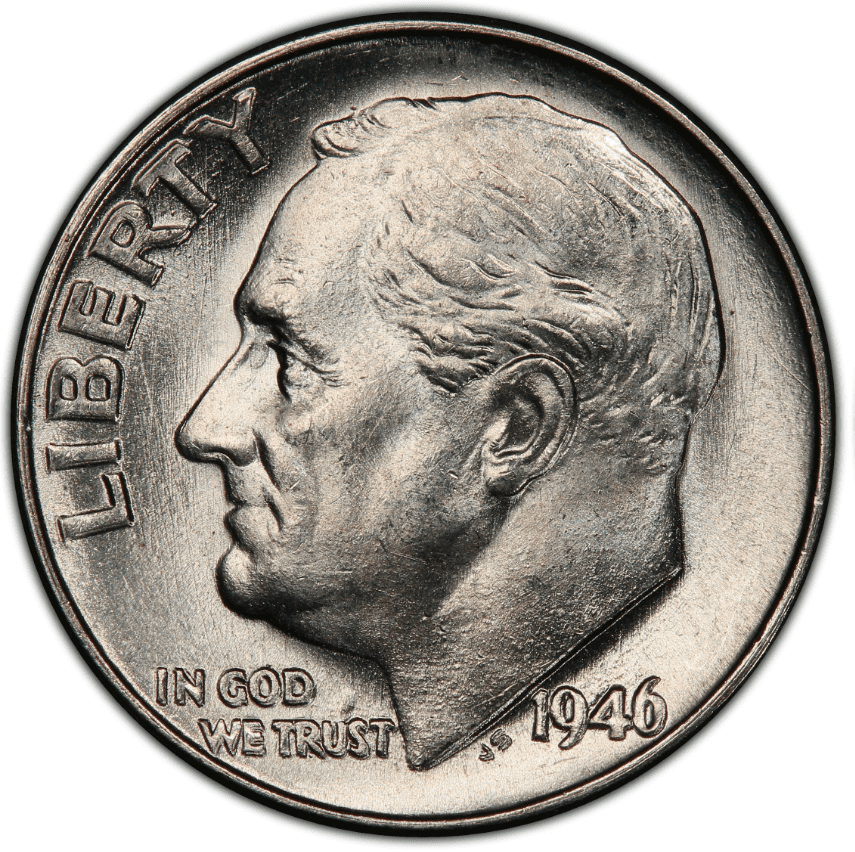 When the doubled-die error occurs on the front of the coin, it’s called a DDO, or doubled-die obverse. And like most doubling errors, the best place to spot it is on the numbers and letters so check the dates and the legends. You can sometimes see the overlaps with your naked eyes but it’s easier to confirm them with a coin microscope or jeweler’s loupe. In MS 65 it’s $135.

To give the coin its perfectly circular size and shape, it’s minted using a three-piece collar. It can also be used to add any ribs or text to the edge. But if the pieces separate too soon or one of them falls off, the metal that forms the coin will spill over the sides, resulting in a flatter and sometimes misshapen coin. This is called a broad-struck error, and an MS sells for $100.

1946 Dime Struck on an Elliptical Planchet

We explained how coins stay so perfectly round, even after being hammered multiple times with a heavy steel die. But what if the planchet itself is the wrong shape? Planchets are punched from metal sheets, so if the punch was deformed or the metal was at the wrong temperature, you may end up with an oval blank instead. This elliptical dime sold for $260.

No, it’s 90% silver and 10% copper. The only dimes that are all silver are proofs made after 2019, which are 99.99% silver, and these are directly sold to collectors so they don’t circulate.

Is There Anything Special About the 1946 Dime?

Yes, it was the first year of the Roosevelt Dime, coined to honor Franklin Delano Roosevelt (FDR). Before that, the Mercury Dime or Winged Liberty Head was used from 1916 to 1945.