What is the 1945 half dollar value? You may be surprised to find out!

This coin was minted in 1945 and has a face value of fifty cents. However, it is sometimes worth a whole lot more than that to collectors. The history, features, and rarity of this coin make it a valuable piece for any collection, including yours.

In this blog post, we will take a closer look at the 1945 half dollar and its value on the collector’s market. So, if you’re curious about this coin, keep reading!

History of the 1945 Half Dollar

First, let’s deep dive into the history of the 1945 half dollar and learn how it came into existence.

The obverse and reverse design for this coin were created by Adolph A. Weinman and is still popular today. It has a breathtaking design featuring Lady Liberty on the obverse and an American eagle with its wings spread wide on the reverse side. It may even be the most beautiful United States coin that has ever been created.

Ironically, Adolph A. Weinman was born in Germany. However, he was raised in the United States of America and was a talented sculptor. Across his career, he not only created the beautiful Walking Liberty half dollar, but he also created the Mercury dime and some sculptures on the architecture of the Jefferson Memorial in Washington D.C.

Features of the 1945 Half Dollar

The 1945 half dollar has many features that make it unique and collectible. Here are some of its most notable characteristics, including the design of the obverse and reverse, its metal composition, the mint marks, and the half dollar’s size and weight:

The Obverse of the 1945 Half Dollar 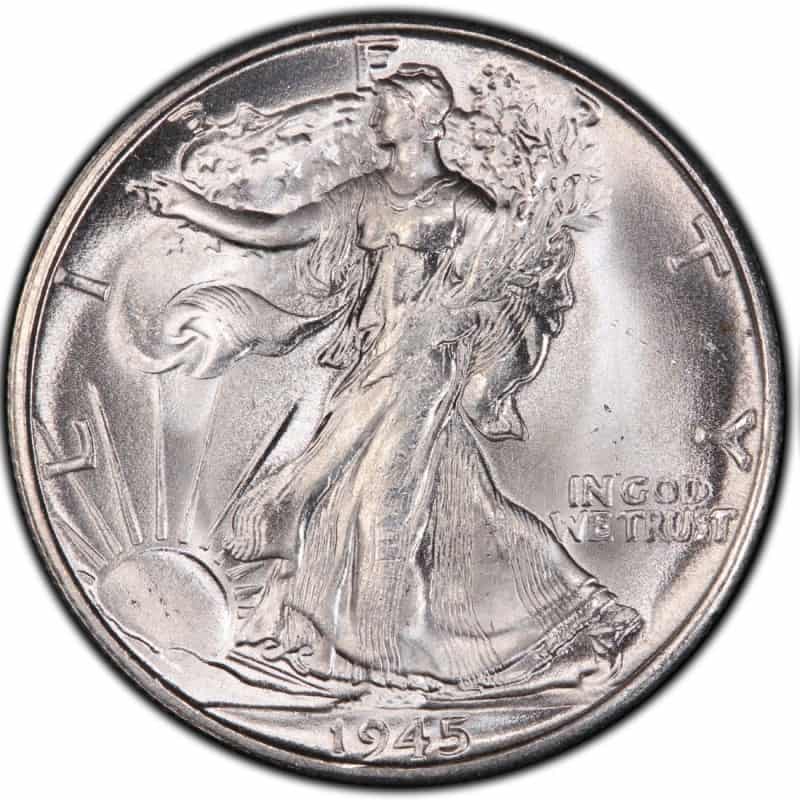 The obverse of the 1945 half dollar features a woman, Lady Liberty, wearing a cap and is draped in an American flag, with its starry surface billowing out away from her. She appears to be walking with the wind at her back, towards a setting (or possibly rising) sun on the horizon. The inscription, “LIBERTY” arches across the top of the coin above her head.

The words “IN GOD WE TRUST” are etched into the coin at the four o’clock position, just behind her legs, and at the very bottom center of the coin, beneath the ground she walks on, is the date – in this case, “1945.”

The Reverse of the 1945 Half Dollar 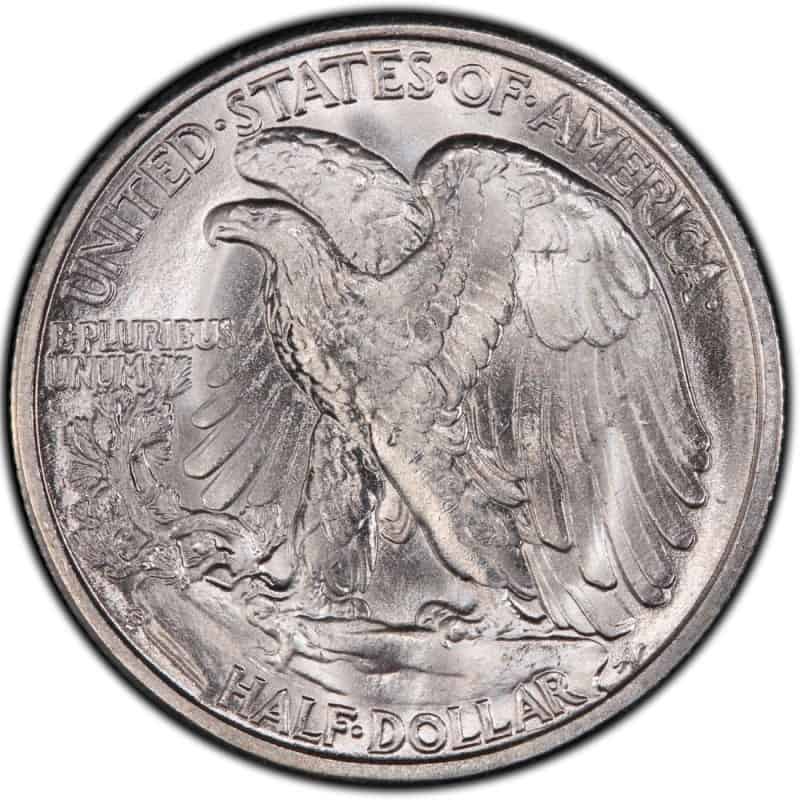 The reverse of the 1945 half dollar features an eagle that is poised for flight. His wings are raised and one foot has stepped forward, causing him to appear to be about to lift off the ground. Beneath him appears to be the edge of a cliff with a branch growing out of it and extending out of the overhang.

In America, the bald eagle is the national bird, and it is often used in coinage and other patriotic memorabilia as a symbol of strength. On the 1945 half dollar, the words “HALF DOLLAR” is inscribed at the bottom center, and the words “UNITED STATES OF AMERICA” arc across the top.

The phrase “E PLURIBUS UNUM.” which means “Out of Many, One,” is to the left, and if there is a mint mark, you will find it very inconspicuously in the bottom left side of the reverse, just under the rocky cliff.

Other Features of the 1945 Half Dollar

Now let’s take a look at some of the other interesting features that make up the 1945 half dollar.

The 1945 half dollar was minted from 90% silver and 10% copper, giving it a beautiful shine that makes it stand out among other coins.

The 1945 half dollar has two distinct mint marks which can tell collectors where it was produced; no mint mark for Philadelphia, “D” for Denver, and “S” for San Francisco.

The 1945 half dollar measures 30.6 millimeters in diameter, having a significantly larger diameter than other large coins like quarters. Its weight is 12.5 grams as well due to its composition. Also, it has a reeded edge.

Half dollars that were originally minted in Philadelphia do not have any mint marks. With 31,502,000 of these coins minted here in 1945, they are some of the most common and widely available 1945 half dollars. However, they can still carry considerable value for collectors, especially if they are in pristine condition.

For example, in the lowest grades, Good condition, these coins typically are valued at $14 – which actually is still a great valuation. A 1945 half dollar in Fine condition is worth about $18, while Extremely Fine coins can be worth around $20 or more depending on their condition. Uncirculated 1945 half dollars from Philadelphia usually carry the highest value at around $39 to $50 or more for pristine examples – one even sold recently at auction for $8,000, so you never know! 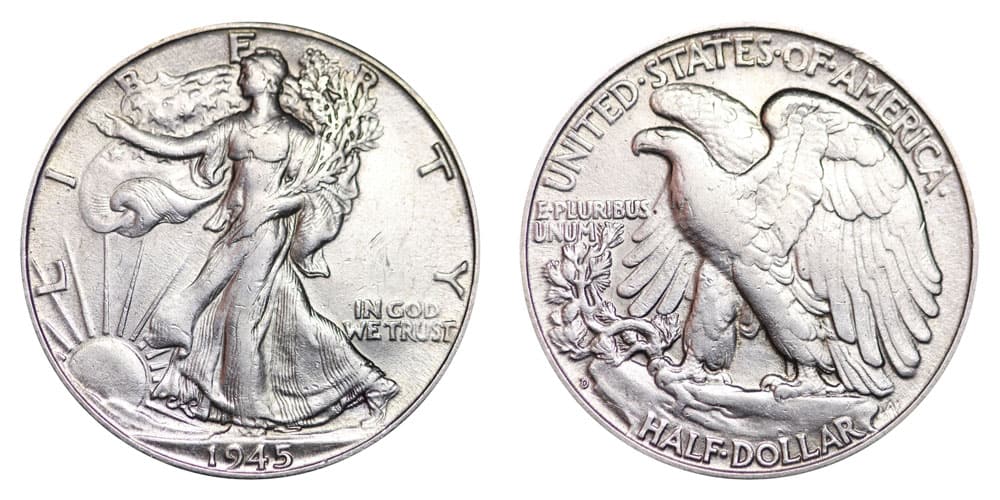 The 1945 half dollars that were originally minted at the Denver Mint will have a “D” mint mark on the reverse side of the coin. These coins typically carry a higher premium for pristine conditions than those from Philadelphia due to their relative rarity, as only 9,966,800 half dollars were minted here.

A lower grade coin such as Good condition will go for $14. Fine condition coins will be valued at about $18, and an Extremely Fine piece may fetch around $20. Uncirculated examples are much rarer, so they could generally fetch prices between $39 and $70 or more for top-tier quality coins.

In fact, one that was in pristine condition sold recently for over $16,000! 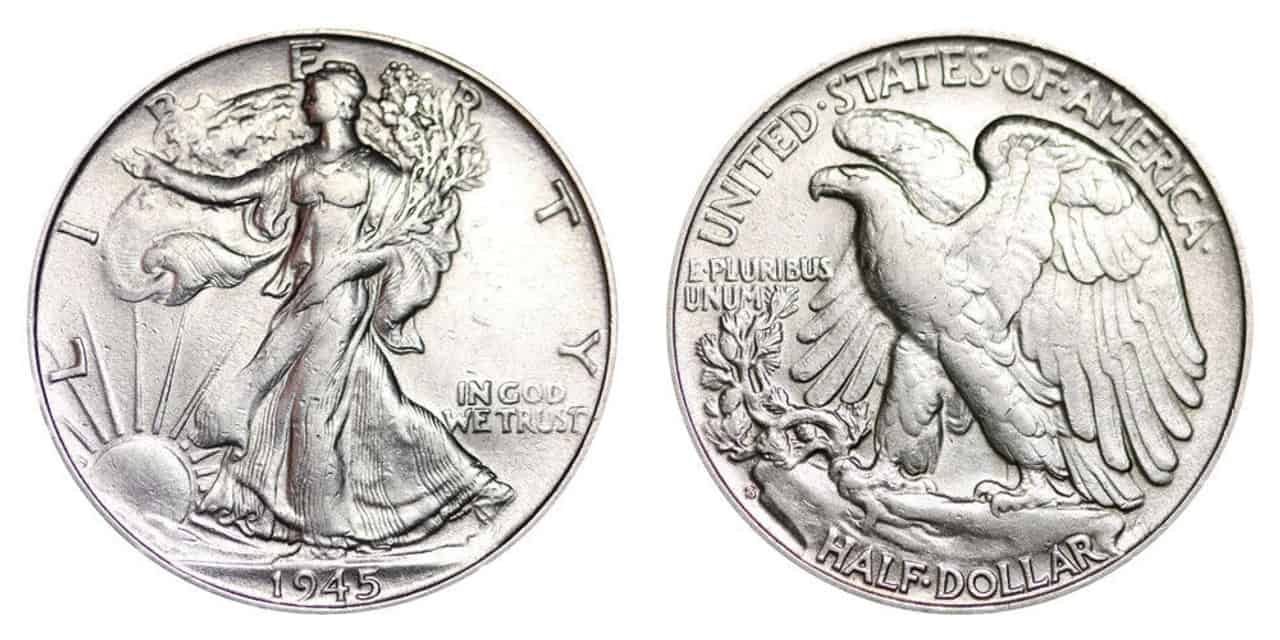 Coins with a Good grade usually come in at $14. Fine condition can bring in about $18, and an Extremely Fine condition coin can be valued at $20. Uncirculated San Francisco examples are rare and hard to come across so they normally bring high premiums – between $42 and $62.

But if you find one in nearly perfect condition, you could get super lucky. One such person sold their “S” mint mark 1945 half dollar at auction for $41,000! You can’t beat that.

Proof coins usually carry extremely high premiums due to their relatively low mintage figures. If you are not familiar with Proof coins, they are specially minted for collectors and typically boast brilliant, slick surfaces with razor-sharp details.

Unfortunately, there are no Proofs for the 1945 half dollar, like there are with several other coins in US history.

As with most coins, there are a handful of errors and varieties associated with the 1945 half dollar. Examples possibly might include (but aren’t limited to) off center strikes, double dies, and other errors that are much rarer than standard 1945 half dollars.

Sometimes these errors don’t add a lot of value to the coin, but in other cases, they can be worth hundreds or even thousands of dollars depending on the coin’s level of rarity and condition. Error coins should always be examined by a reputable third-party grading service in order to determine their authenticity and exact value. 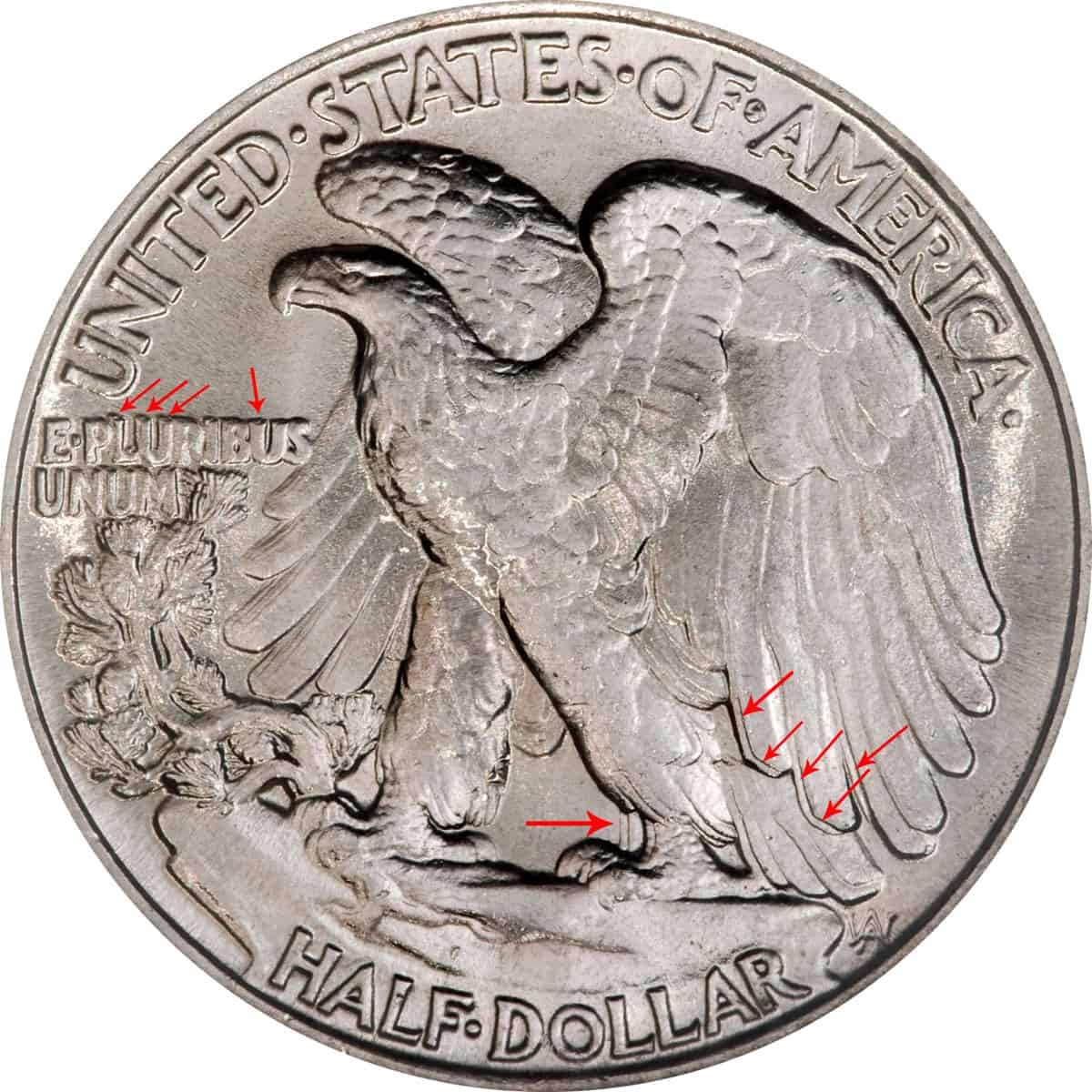 One of these in pretty high condition sold for $94 at auction.

1945 Half Dollar with Double Strike Error 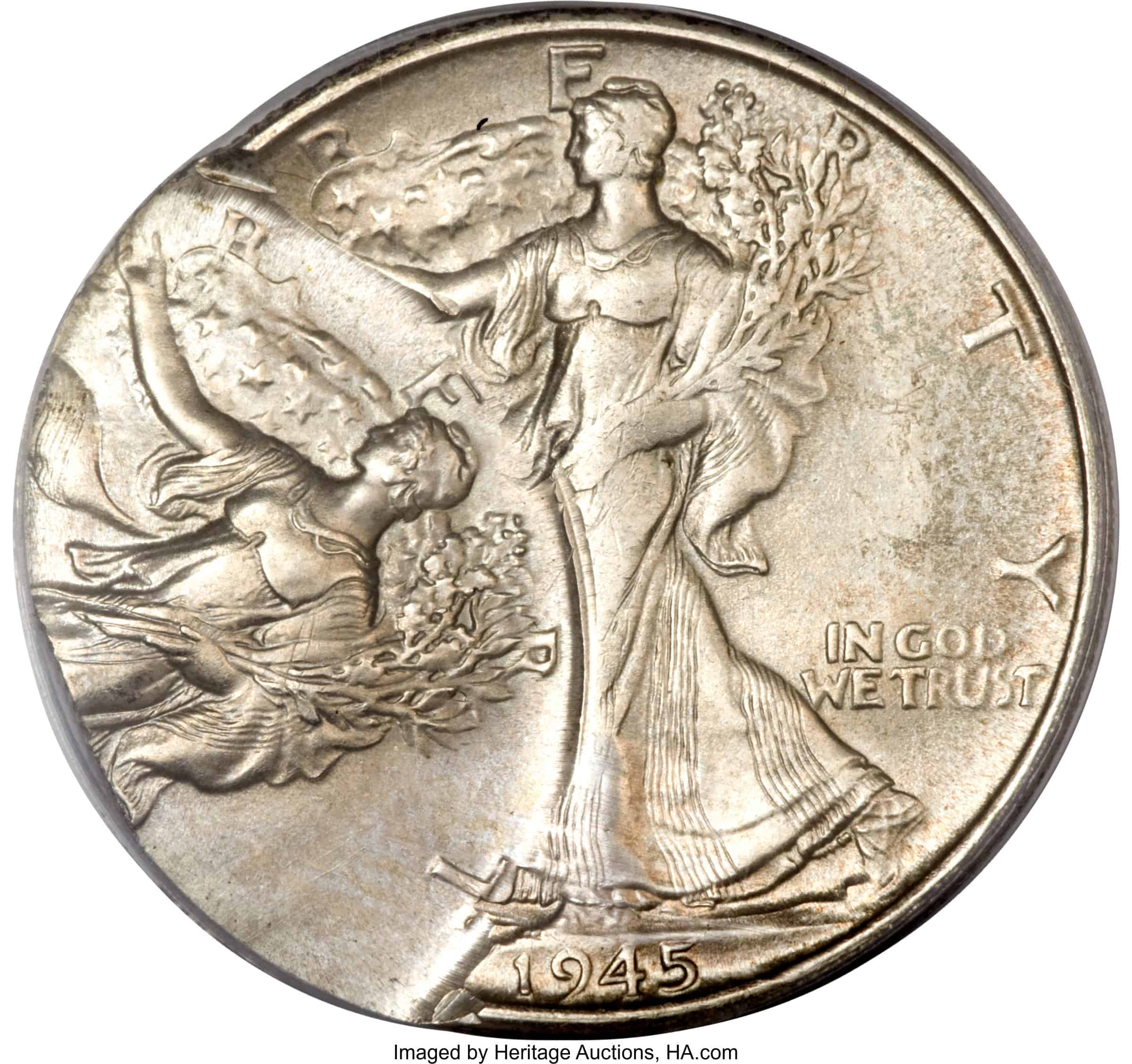 An interesting coin with this error surfaced recently. It had a double strike, but the second strike was actually rotated 55% from the first strike! This error caused Lady Liberty to appear vertical as well as horizontal on the obverse of the coin.

This coin is extremely rare and it sold for a whopping $41,000 at auction. How amazing is that?

1945 Half Dollar with Planchet Crack Error

A 1945 half dollar with a planchet crack error is also worth noting. A planchet crack occurs when part of the blank coin that is struck gets cracked. One such example sold for $70 at auction. 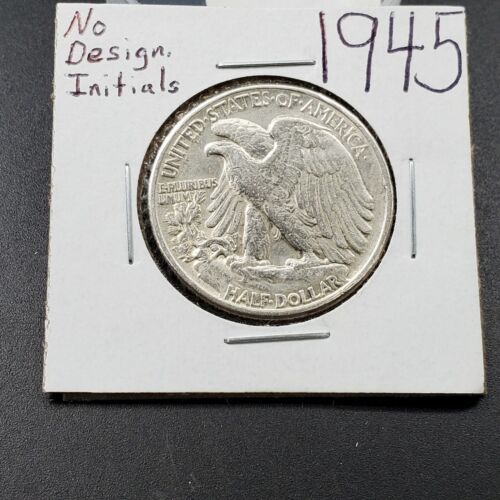 A 1945 half dollar with a missing artist initials error can also fetch some pretty good money. This kind of error occurs when the coin is struck without the designer’s initials, which appear on all typical Walking Liberty half dollar coins. It is usually located on the reverse at the lower right side, beneath the eagle and cliff.

One example in near perfect condition sold at an auction for over $700 recently.

1945 Half Dollar on a Ten Cent Planchet Error

Finally, a 1945 half dollar on a ten cent planchet error can also be worth some good money. It sounds kind of crazy, but this error occurred when the coin was struck with the wrong kind of blank – in this case, the 10-cent variety (meant for a dime), instead of the usual 50-cent one.

One such example sold for an amazing $41,000 at auction recently!

Now that you have a better idea of the 1945 half dollar value, here are some frequently asked questions about these coins.

Should I Clean My 1945 Half Dollar Before Getting it Graded by a Professional?

No, you should never clean your coins before getting them graded by a professional. In fact, coin cleaning is considered an act of altering a coin and dramatically decreases its value.

Professionals have the knowledge and experience to grade coins accurately, regardless of their condition. Cleaning a coin can actually do more harm than good by removing important details or markings that could impact its value. It’s best to leave the cleaning to the experts.

That being said, if your coin is dirty or covered in dirt, you can gently brush it off with a soft brush before sending it in for grading. Just be sure not to scrub too hard or use any harsh chemicals that could damage the coin.

What do the Different Grades Mean for a 1945 Half Dollar?

Coins are graded according to their physical appearance, with higher grades being assigned to coins that retain most or all of their original details and surfaces.

For example, Good grade pieces usually exhibit heavy wear with little remaining detail, while Extremely Fine pieces are noticeably sharper with some minor signs of wear but in overall great condition. Uncirculated coins appear brand new but may still show some very minor signs of handling or contact marks due to their age and storage history.

To conclude, the 1945 half dollar is an iconic coin that many collectors value highly because of its history, design, metal composition, mint marks, and size and weight, which sets it apart from other coins released during this period or afterwards. That makes it one of the most recognizable and spectacular half dollars produced by US Mints of all time!

Are you looking for a 1945 half dollar to add to your collection? Please let us know in the comments. Thanks for reading!