History of the 1944 liberty Dime

In the early days, all American coins were gold or silver. These are called specie metals. But wars, price fluctuation, and economic hardship made people hoard these precious metals at various times in history.  When the price of raw metal is higher than the denomination of the coin (aka face value), citizens melt the coins and sell the molten silver (or gold) for a profit.

In silver coins, this is called silver stacking, and the mint resolved this issue first by minting more coins to cover the shortfall, then by switching to base metals like tin, copper, nickel, or zinc. That’s why today’s dime is made of 91.67% copper and 8.33% nickel. The inner coin is pure copper while the outer coin is a mix of 75% copper and 25% nickel for that silver shine.

Disme is an Old French word that means tithe or tenth, and that silent ‘s’ was eventually dropped. American Di(s)mes appeared in 1792. They were one-tenth the value and weight of a silver dollar, though they didn’t make circulation dimes until 1796. Smaller coins have their denomination listed in cents (e.g. the nickel says Five Cents), but the dime says One Dime.

Initially, US currency was designed by in-house Mint Engravers, and that Barber Dime was designed by Charles Barber, who served from 1879 to 1917. He succeeded his father, William Barber, who was the Chief Mint Engraver from 1869 to 1879. But starting in 1904, the mint hired professional artists at the behest of Theodore (Teddy) Roosevelt, the 26th US President.

He wanted American coins to be prettier and have some artistic merit beyond their function, so he made the mint hire Augustus Saint-Gaudens to redesign them. When Saint-Gaudens died of cancer in 1907, his assistants continued his task. These included James Earle Fraser who designed the Buffalo Nickel and Victor David Brenner who worked on the Lincoln Cent.

But it was one of Saint-Gaudens’ students that designed the Mercury Dime. His name was Adolph A. Weinman. He competed against three other sculptors (including Charles Barber) to win the Dime Design contest. People assume the device is Mercury, the Roman Messenger God, aka Hermes in Greek. (Device is the technical name for a portrait or image on a coin.)

In truth, the device is female, probably based on Elsie Kachel Stevens. She was married to the insurance lawyer and poet Wallace Stevens, lived in an apartment rented from Weinman, and was likely the model for Lady Liberty. But she’s not wearing Mercury’s Helmet, headgear that’s sometimes worn by the Goddess Roma. Instead, Liberty wears a winged Phrygian Cap.

Wingless Phrygian caps aka Liberty Caps were worn by emancipated slaves in Ancient Rome. They were co-opted to symbolize freedom during the French and American Revolutions. So Lady Liberty’s Winged Phrygian Cap expressed freedom of thought. The model posed in a cut stocking to simulate the Phrygian cap, and many see it as the prettiest US coin ever minted!

The dime can be a puzzling coin since it’s smaller than a nickel, even though it’s double the face value of a 5c. And for such a tiny coin, the 1944 Dime punches way above its weight in collector’s value and physical beauty. Let’s take a closer look at this minuscule silver piece. 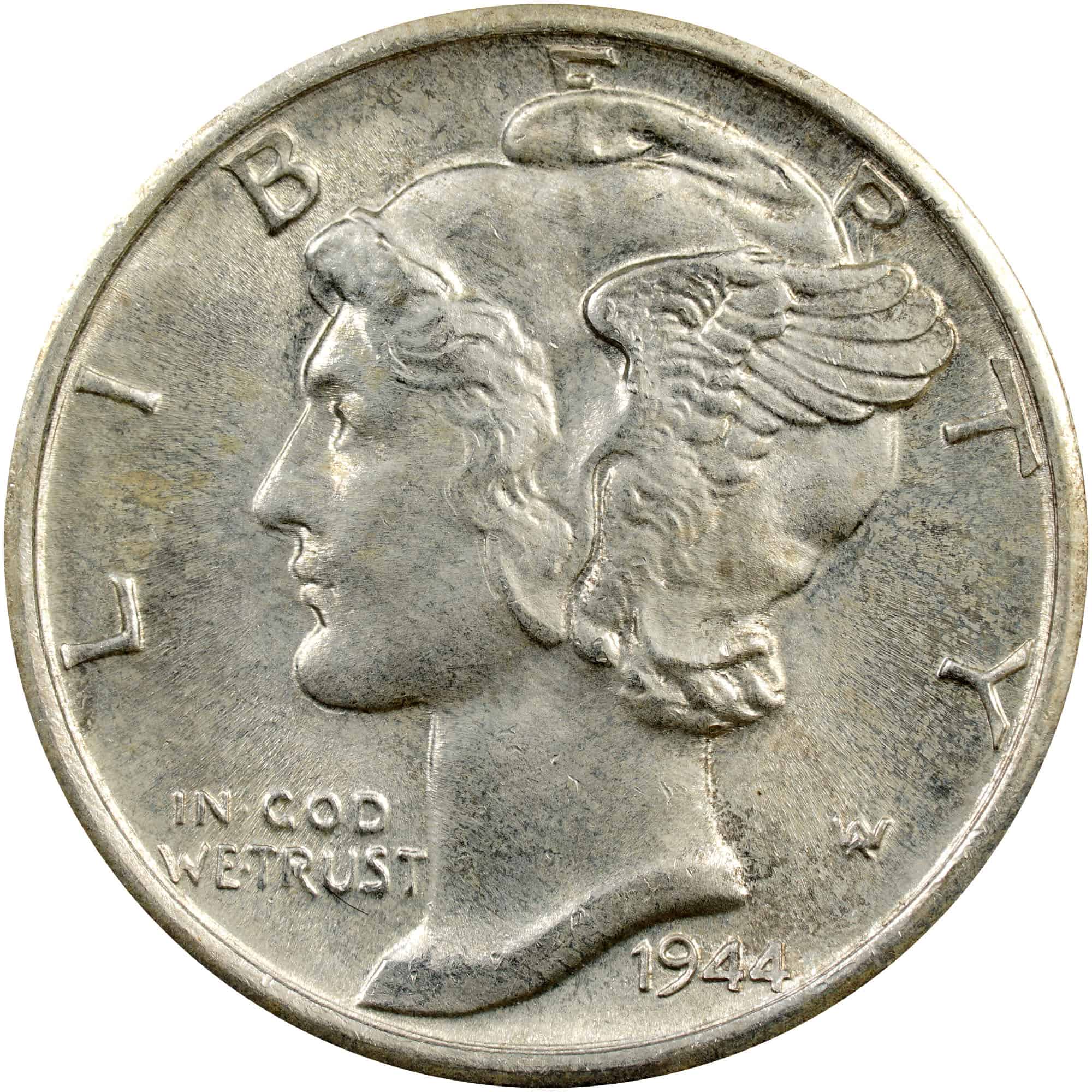 The obverse (heads side) of the 1944 Dime bears an image of Lady Liberty dressed in a winged Phrygian Cap. That’s why she’s sometimes mistaken for Mercury (or Hermes) and, is where the coin got its nickname. For reference, it’s officially known as the Winged Liberty Head Dime. The device faces left, with In God We Trust on the lower left, under her chin.

The mint date is tucked on the lower right, under her neckline cut-off, and the designer’s monogram, a stylized AW, is near the right border of the coin, behind her neck. The legend Liberty runs along the upper collar of the coin and curves around her head, with most of the BER hidden in her cap. It’s closely cropped with the device almost touching the coin’s edges. 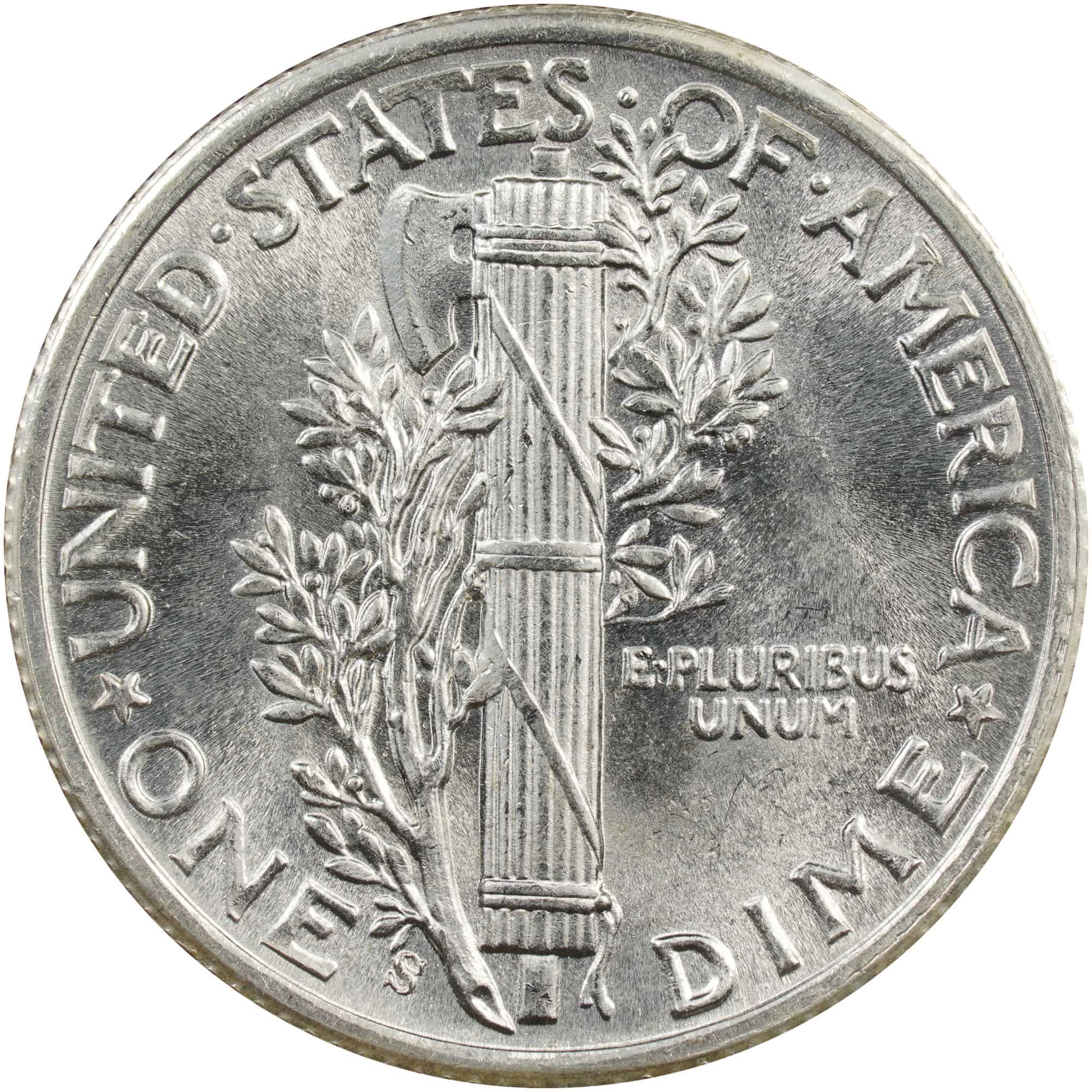 The reverse (tails side) of the coin has legends all along the collar. The top says United States of America with dots between the words, and the bottom says One Dime with two stars separating it from the upper text. The mint mark is next to the One in One Dime, tucked under the olive branch. E Pluribus Unum is on the right, next to one of the separating stars.

The device on the coin is an olive branch wrapped around a fasces, which is a bundle of sticks or firewood with a battle axe or hatchet hidden behind it. The fasces is an Italian symbol of Etruscan origin that represented a magistrate’s authority. Mussolini later adopted it for the fascists, but here, it symbolizes America’s peace policy even as our nation was ready for war.

Other Features of the 1944 Dime

The 1944 Dime was 90% silver and 10% copper. Weirdly, it’s physically smaller than a nickel (5c) but double its face value. At 17.91mm in diameter and 1.35m thick, it’s the smallest and thinnest circulating coin. In inches, that’s 0.705” and 0.053” respectively. There’s a reason the coin was so small – they had to ensure its silver content remained below its face value!

The coin weighs 2.5g and has 118 reeds along its edge. Its current melt value as of November 2022 is about $1.50. And while other wartime coins had different metal compositions, the dime stayed intact. This is because other coins were preserving copper and nickel for the war effort so they were changed to steel, silver, or zinc. The dime was mostly silver so it was fine.

The 1944 Dime is a coin rich in brains and brawn because it’s visually attractive and has precious metal bona fides. Let’s look at the specific values of each coin based on mint marks. Note that superior coins in high grades are sometimes graded as FB for full bands, meaning the horizontal roping that ties those fasces sticks together can be clearly seen on the coin. 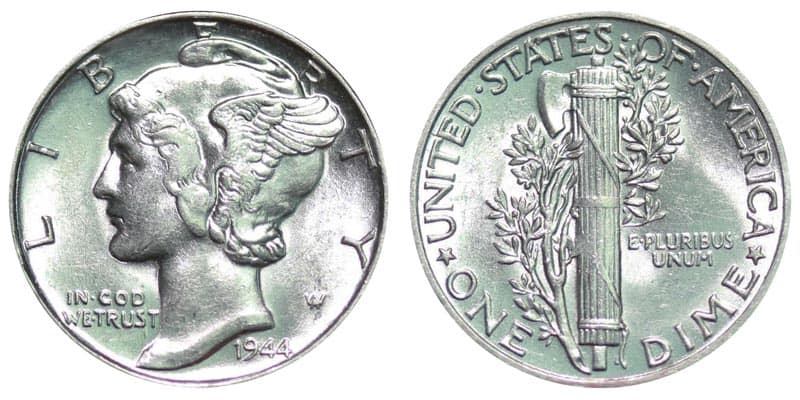 In 1944, the Philadelphia Mint made 231,410,000 Silver Dimes without mint marks. In MS 68 FB (meaning you can see the separating lines on the horizontal bands), this coin is worth $15,000! For reference, the fasces has three sets of bands. The set at the top of the fasces has three rows of bands, and the sets in the middle and bottom have a pair of bundle straps each.

Today, high-grade Mercury Dimes are sought by collectors while silver stackers keep low-grade coins as ‘junk silver’ or ‘informal bullion’. Their value is based on the current spot price of silver, so it’s a convenient and affordable way for the average citizen to stockpile precious metal. But as resellers sift through silver dime coin rolls, they can find valuable error coins!

To produce a coin, hubs strike dies, then dies strike planchets. Planchets are the blank discs that eventually make coins, and the mint mark is hand-punched onto the completed coin. If the planchet moves between puncheon strikes, you can get a doubled or tripled mint mark. This is called RPM or re-punched mint mark. A D over D (D/D) RPM in MS 66 sold for $125.

Most coins have collars to retain their shape, and these collars are often minted using three collar pieces that detach. If any (or all) of the collar pieces come off prematurely, the metal in the coin will ‘bleed’ outside its borders, creating a coin that’s thinner and wider than usual. This is called a broadstrike or broadstruck error, and in MS 64, it can sell for about $175.

The lettering on the 1944 Mercury Dime has a softer, rounder font. This makes doubling tough to spot, and DDOs aren’t listed on official error lists. But if you hold 1944-D Dimes side by side, you might notice some have a puffy ballooning effect on the legend In God We Trust, and these are classified as DDOs by the NGC. This DDO is worth about $50 to $200.

On the earlier broadstrike error, the silver bled toward the top of the coin. But on this one, it’s the side collars that detached too soon, so the coin is flattened towards the front left and back right. This caused smudging on the outer edges of the word Liberty (obverse) and a flattened collar all around the reverse of the coin. In MS 63 FB, the coin sold for about $115.

Usually, FB coins fetch better prices than regular grades. But sometimes, you can be pleasantly surprised! We’ve just looked at an MS 63 FB broadstrike that sold for a bit over $100. But here’s an MS 63 broadstrike without full bands. The coin has flattened collars on both sides, and due to timing, high demand, or luck of the draw, this coin sold for $335.

Planchets are made by punching them out of a sheet then feeding them into a coin hopper, ready to be struck by the right die. But a clipped planchet error could mean a section of the blank disc got chopped off by a previous coin or sliced by a mispositioned coin blade. This 1944 Mercury Dime has 12% clipped off Lady Liberty’s head, and in AU 55, it sold for $50.

Sometimes, when the planchet gets sliced or clipped, it’s a clean symmetrical cut. That means it happened fast and at high pressure. But a slower cut from a blunt or jagged source might result in a rough or ragged chop. On this coin, it looks like the planchet was squashed inward, creating a jagged dent near In God We Trust. In MS 66, the coin sold for about $125. 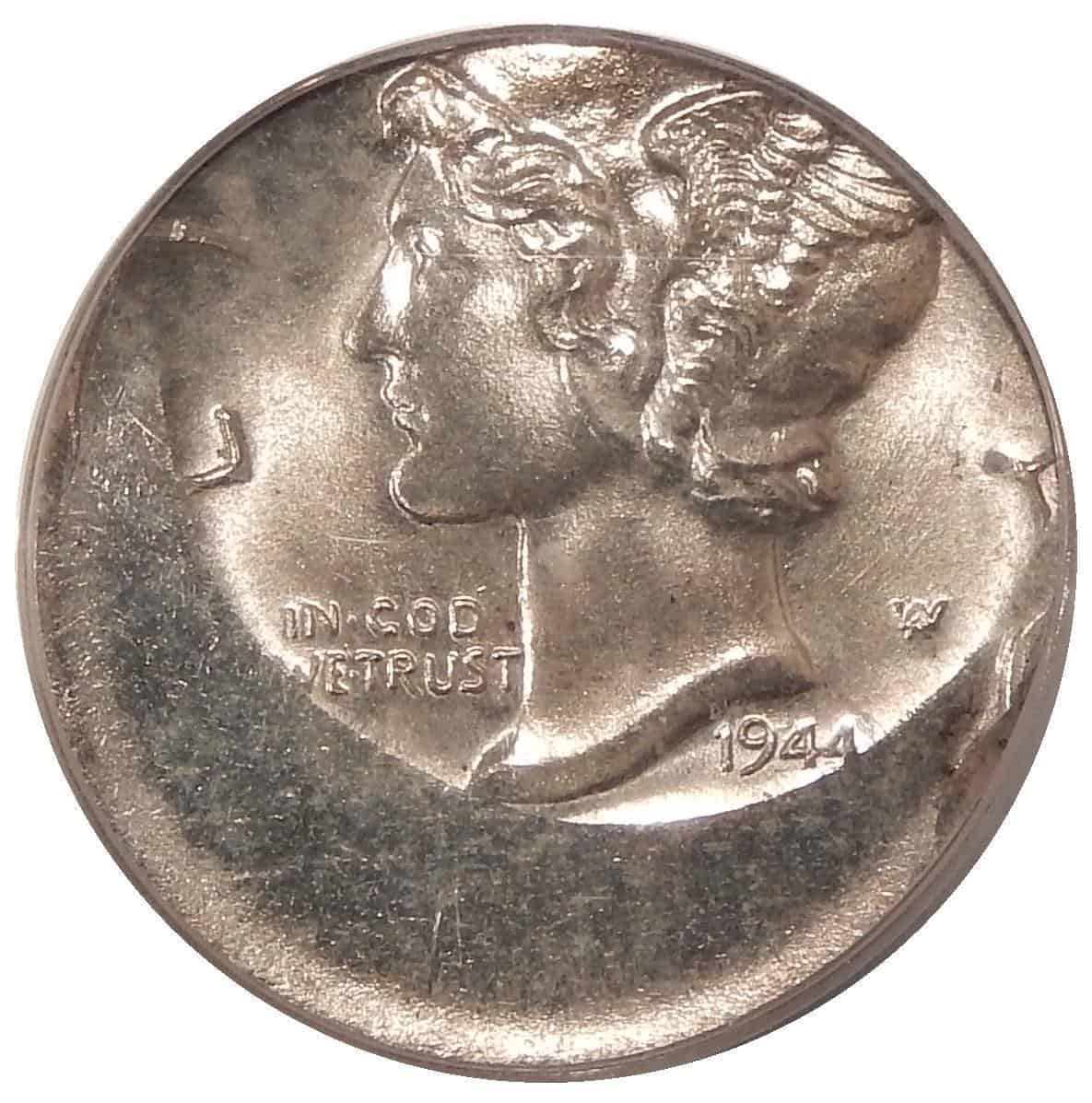 On occasion, the whole planchet will move between die strikes. Or maybe it was the die that wasn’t well-secured so it jiggled or wobbled while striking the planchet. A small hub wiggle can cause doubling on the die, which transfers to all coins made with that die. But if it’s the die or planchet that moves, you’ll get off-center errors. This one in MS 64 FB sold for $1,100!

The value of off-center errors depends on how dramatic they are, though the coin grade matters too. And off-center errors are popular among collectors because they’re so blatant. The previous 30% off-center chopped off the top of Lady Liberty’s winged cap. This 20% off-center is more toward her left side. In the same grade – MS 64 FB – it sold for around $515. 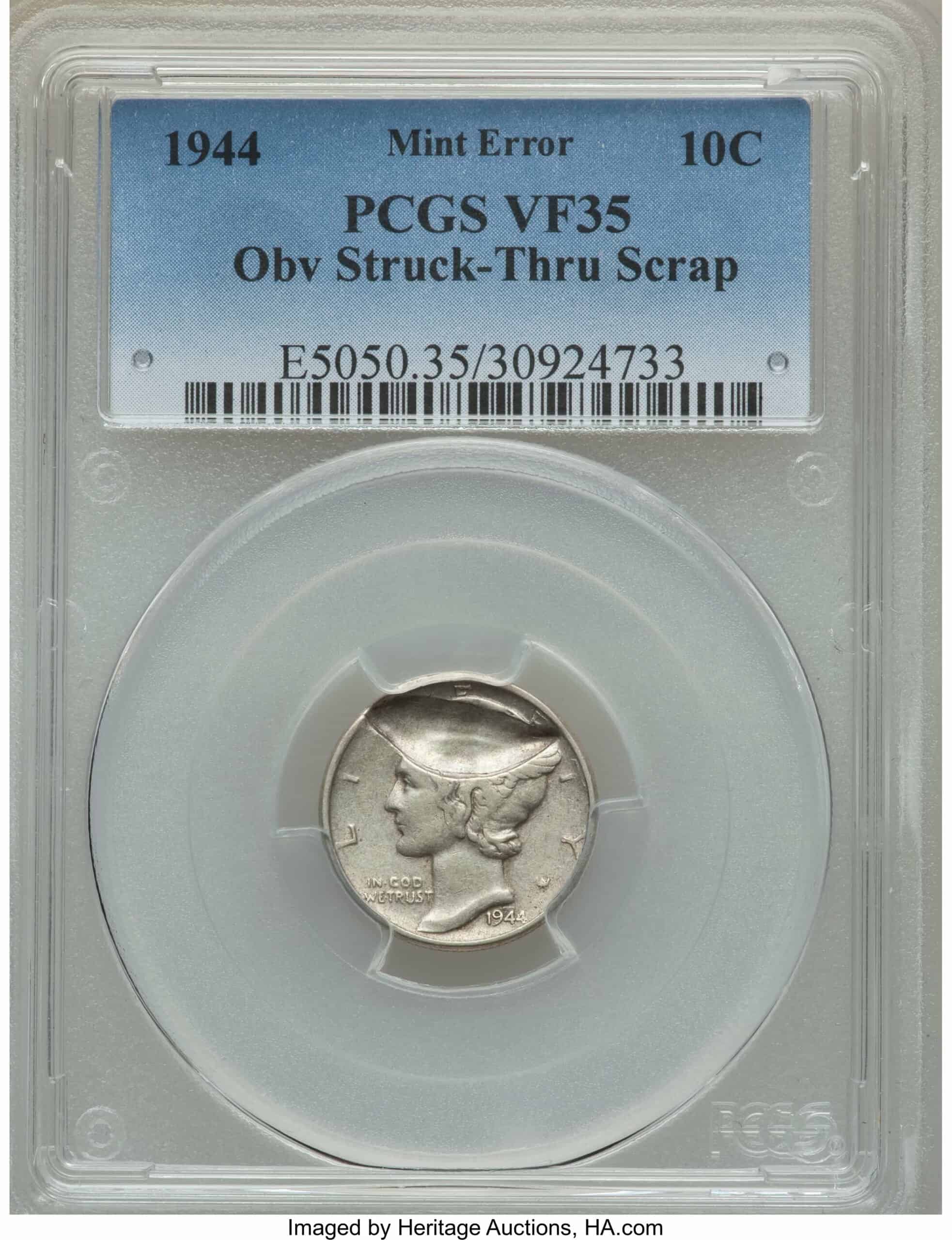 A strikethrough (or struck thru or strike thru) is when a foreign object slips between the die and the planchet during minting. This contaminant leaves an etching or silhouette on the finished coin. And in this case, the interrupter was a piece of scrap metal that dented the top of Lady Liberty’s cap and forehead. In the low grade of VF 35, this Silver Dime sold for $100.

Coins have to be struck at least twice to ensure the details are clearly rendered. But in this case, the coin was flipped before double-striking. You can see some of the reverse detail on the obverse and vice versa, and it looks like one coin was finely overlaid on another coin. The errors are visible along the lower front and upper back collars. In MS 62, it sold for $3,400.