A nickel is a 5-cent coin that’s silver in color, thanks to the nickel coating on the outer layers of the coin. That’s also how it got its nickname. But the 1943 Nickel – sometimes called the War Nickel – had actual silver in it. This makes the coins more valuable than clad nickels from other years. So let’s mine this coin for its secrets and discover the 1943 Nickel Value.

Early nickels were referred to as half dimes or half dismes, with a silent ‘s’. A dime is a 10c silver piece, and the earliest half dismes were silver as well. When silver was demonetized, the nickel stepped in, with its clad composition of copper and nickel. Curiously, other clad coins were designed to control silver stacking due to the rising price of silver over the years.

Initially, all American coins were silver or gold. But as silver appreciated in price, these coins surpassed their face value. For example, a $1 silver coin might be worth $1.26 if you melted it down, so the public hoarded silver coins for their melt value rather than their face value. This was called silver stacking, and people still do it today. But the government needed a solution.

They opted to gradually take the silver out of these coins, replacing them with a Johnson Sandwich – named for President Lyndon Johnson. The sandwich was a 75% copper core plated with 25% nickel. But during the Second World War, the military needed nickel for weaponry and equipment, so a new coin was developed to redirect nickel to the military.

This new coin was used between 1942 and 1945, and since it had no nickel, they had to infuse silver into the coin. But they didn’t want to use so much that the coins would be stacked for silver, so they kept the proportion relatively low. This silver content – plus the short period of minting – makes these coins interesting to collectors and resellers. And they’re rare too.

Thomas Jefferson and the Silver Nickel

The 1943 Nickel is a Jefferson Nickel and is often described as a Silver Nickel (1942 to 1945). Jefferson Nickels were introduced in 1938 and they’re still in use today, though a nickel can barely buy anything and some people want them phased out. As of 2020, it cost the US Mint 7 cents to produce this 5-cent coin, so they’re essentially making a loss on these clad coins.

Jefferson Nickels were designed by Felix Schlag, who won $1,000 in the coin design contest. The contest received 390 entries and had four judges – three professional sculptors and the current Mint Director Nellie Tayloe Ross. They reviewed the competitors’ work for 4 days before awarding Felix, a recent German immigrant who had only been in the US for 9 years.

Oddly, his initials didn’t appear on the coin until 1966, so you won’t find them on the 1943 Nickel. Maybe he was unfamiliar with the signature rule, which may also be why he placed United States at the bottom of the coin. And although the coins began in 1938, Jefferson’s Bicentennial was in 1943, so the coin design centered on this beloved 3rd President of the US.

It featured his face on the front and his home on the back. And since 1943 was the 200th anniversary of his birth, Silver Nickels from this year are especially prized among the War Nickel set. Schlag’s design depicted Monticello at an angle, but he was asked to edit the sculpture and show it head-on instead. He was also asked to change the font on the legends.

Features of the 1943 Nickel

As we’ve mentioned, the 1943 Nickel is part of the Silver War Nickel set that was used from 1942 to 1945. The Mint needed to quickly remove them from circulation once the war was over, so these coins had distinct features that made it easy to identify and extract them from coin rolls. Let’s review these distinguishing characteristics and see what made them special.

The Obverse of the 1943 Nickel 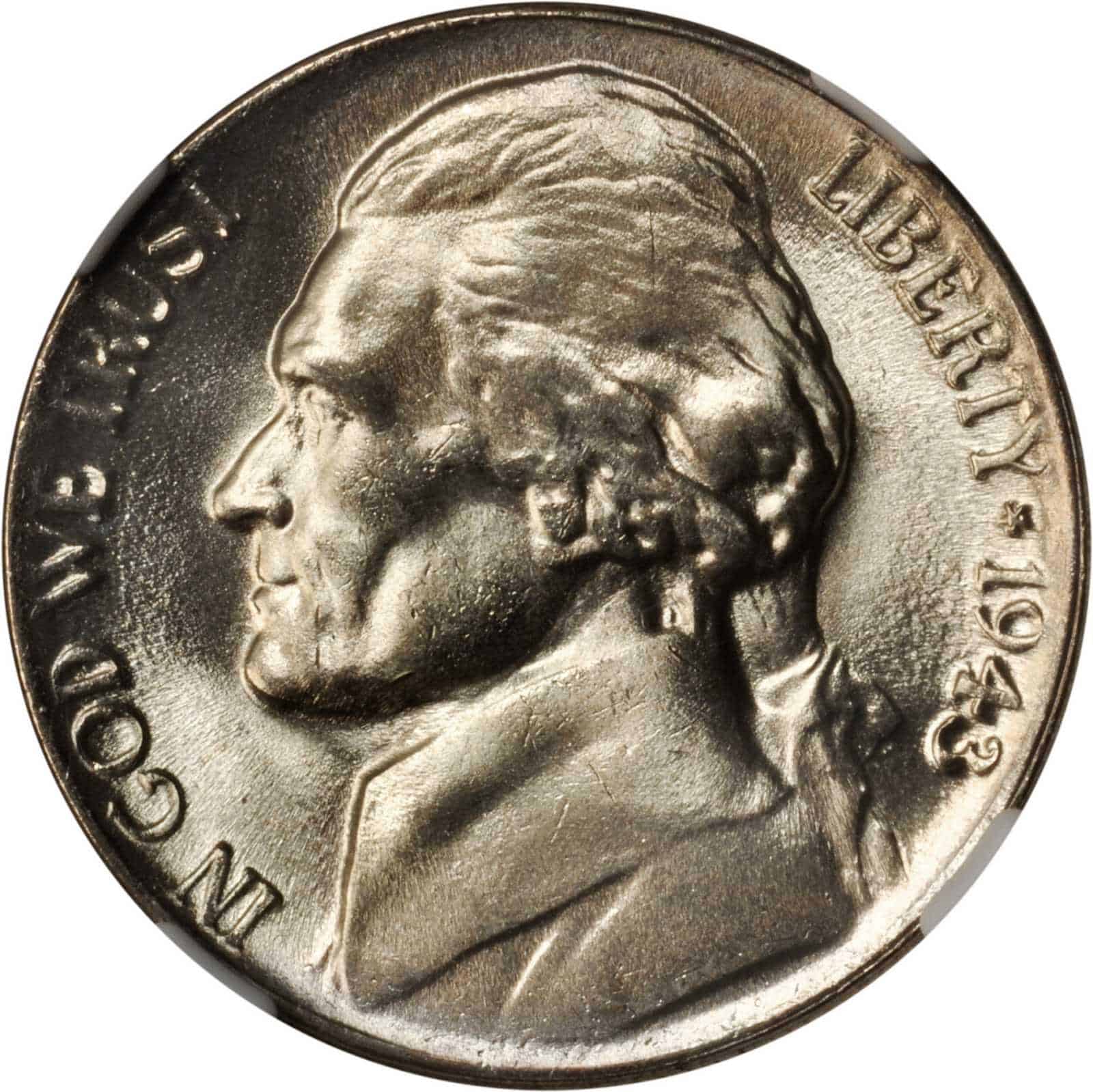 The obverse (heads side) of the 1943 Nickel has a portrait of Thomas Jefferson facing left. Unlike other coins, the legends lie on either side of his head, with In God We Trust on the left and Liberty on the right, behind his head. After Liberty, there’s a star, followed by the date.

No coins had mint marks from 1965 to 1967. And incidentally, from 1968 to 2004, the mint mark was on the obverse, after the date. But in 1943, the Jefferson Nickel had no mint marks or any designer’s signature on the obverse. It only had the two legends plus the mintage date.

The Reverse of the 1943 Nickel 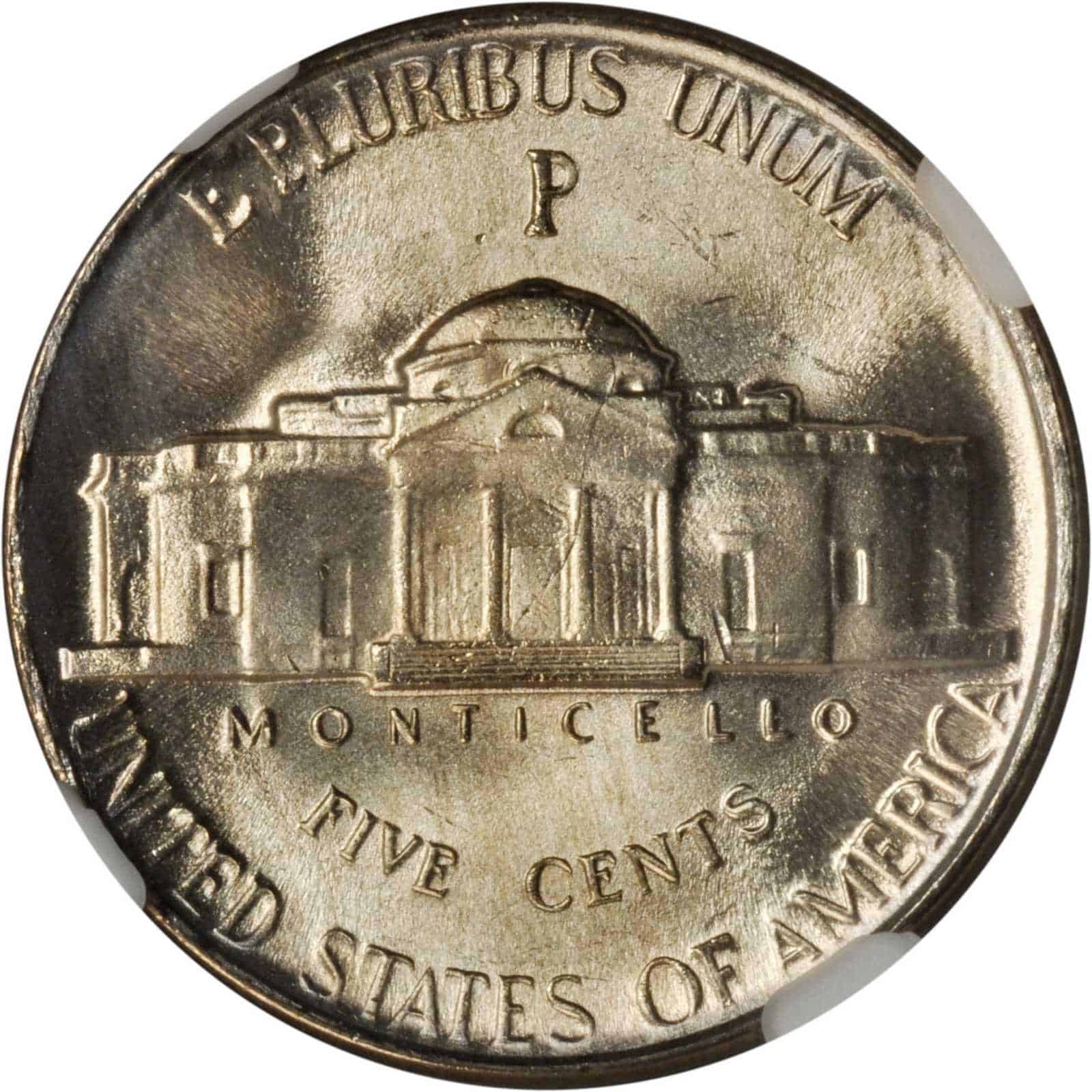 The reverse (tails side) of the 1943 Nickel features a closely cropped Monticello that almost touches the collar of the coin. Above the dome is a large mint mark, with E Pluribus Unum above that. Below the building is the word Monticello in a horizontal layout. Five Cents is curved below that, followed by United States of America running along the lower collar.

Other Features of the 1943 Nickel

These War Nickels have a smooth edge, and to easily spot them amid other nickels, they were punched with extra-large mint marks. The position of the mint mark was different too. They were placed under E Pluribus Unum, directly above Monticello’s dome. This allowed mint workers, commercial cashiers, and bank staff to spot these coins at a glance once recalled.

The melt value of 1943 Nickels is higher than its clad cousins because of the silver content. But these coins are also valuable because they were only minted for a few years and should all be back at the mint where they were set for destruction and salvaging. This means the 1943 Nickels that exist in the wild can earn quite a premium above their 5-cent face value.

Another value marker is the FS designation aka Full Steps. Monticello has 6 steps leading up to it, and in well-preserved coins, you can see the steps and count them distinctly. But on most coins, the steps blur together in blended lines. If a coin has at least 5 of the steps clearly showing, it will be graded as FS, 5FS, or 6FS, which adds greatly to the price of this nickel. 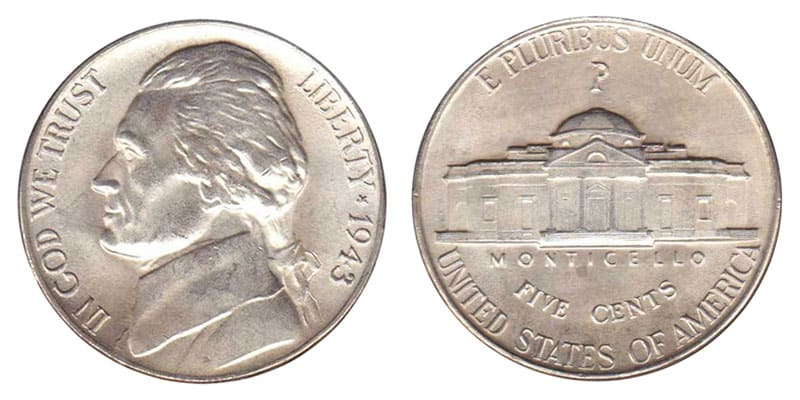 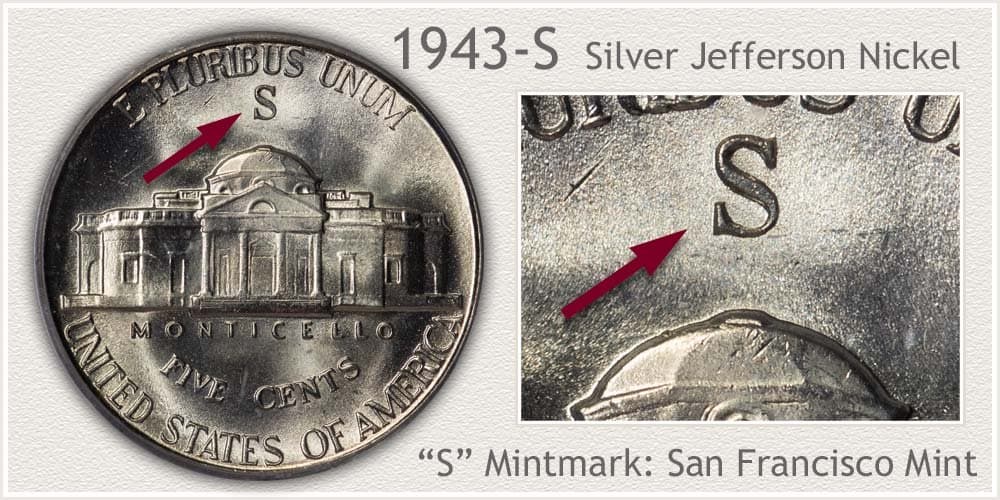 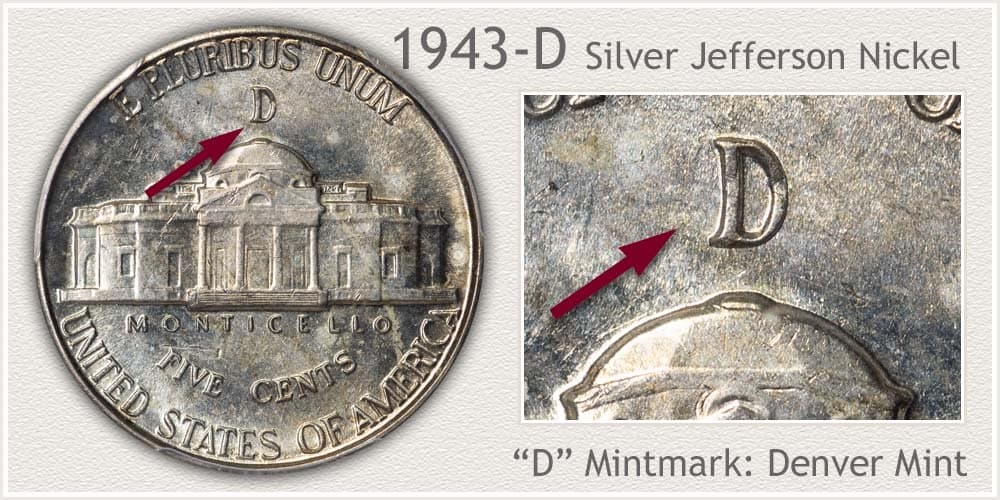 Errors on coins are almost always worth good money. But the 1943 Nickel has errors that sometimes qualify as varieties since they used the same flawed die and released thousands before the mistake was corrected. Let’s review these infamous 1943 Silver Nickel coin flaws. 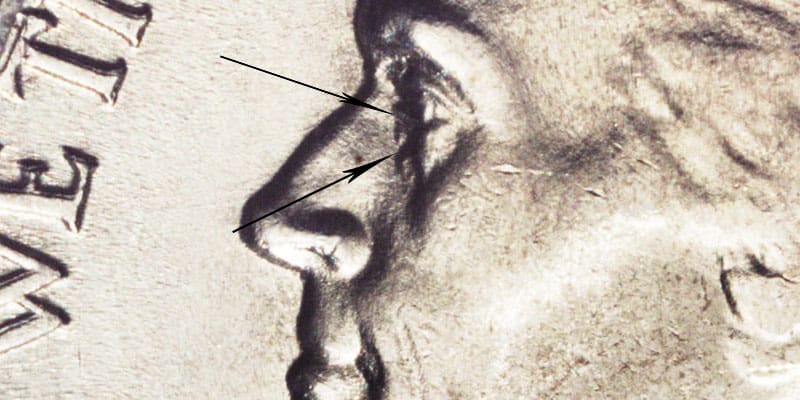 If you’re a fan of puns, you may notice that doubled-eye sounds a lot like double-die. And this coin technically has both. It’s a DDO (double-die obverse) that is seen most clearly on Jefferson’s eye. Both the doubled-eye and 1943/2 errors are only on Philadelphia Silver Nickels. It’s $840 in MS 67 and $5,405 in MS 67 FS. Another sample sold for over $11,000.

The blank disc that is used to make a coin is called a planchet, and it’s usually punched out of a planchet sheet. But sometimes, the planchet shifts between die strikes, and that can create an off-center error that leaves part of the planchet blank. This sample has blank spots on the lower front and upper back of the coin. In the grade of XF 45, the coin sold for $170 in 2022.

1943 Nickel Struck on a Penny Planchet 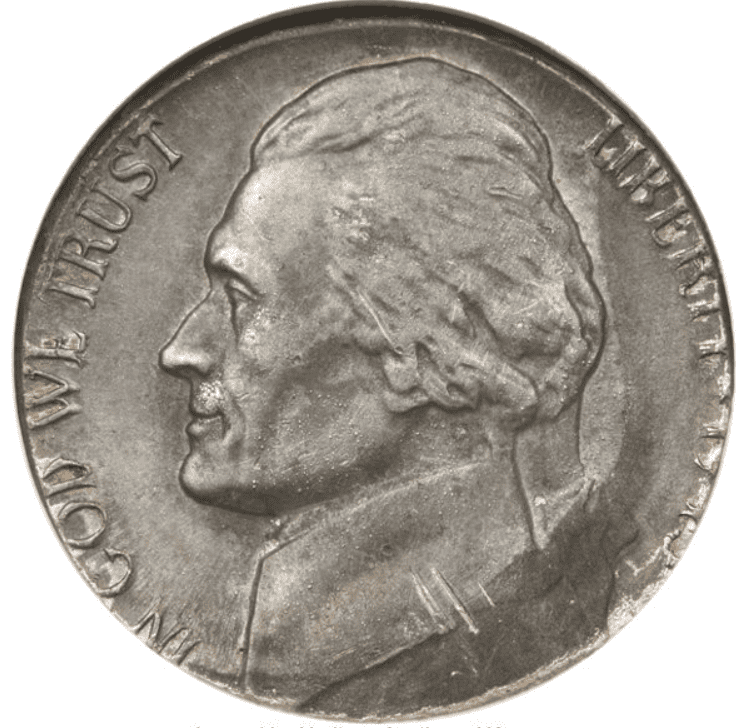 Nickels weigh 5g, so if yours is only 2.7g, 2.8g, or 2.9g, that’s a pretty loud hint. These three nickels were all struck on a blank intended for a penny. Usually, pennies are 95% copper, but 1943 War Pennies aka Steelies were zinc-pated steel and had the silvery color of nickels.

Until 1989, mint marks were manually punched using a hand-held tool. And this applies even to the extra-large mint marks on War Nickels. If the coin shifted between punching strikes, you might get a doubling or tripling error when subsequent stamps landed at a different spot. It’s called a re-punched mint mark (RPM), and in MS 66 5FS, it’s worth $200. 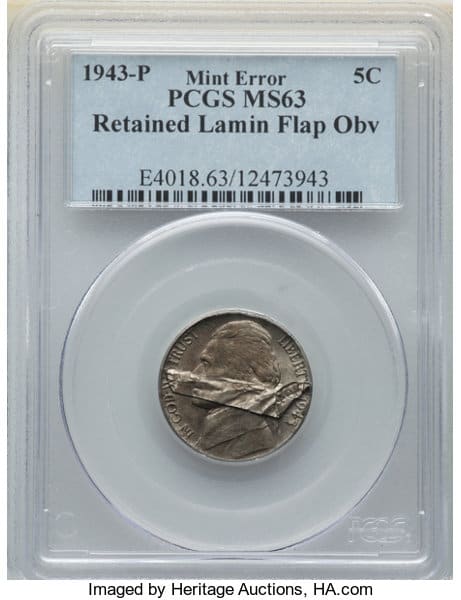 Before you’ve gained much experience, you might mistake lamination errors for cuds or die breaks, since they look similar. But on lamination errors, the surface chips off while on cuds, the broken die transfers the chip onto the coin. This lamination error shows flaking across Jefferson’s face and neck. It seems to be peeling off, and in MS 63, it sold for about $200.

1943 Nickel Struck on a Cupronickel Planchet

In all other years, Jefferson Nickels were clad coins with 75% copper and 25% nickel, and it’s only the War Years that had silver. So you may spot a 1943-D Nickel that was struck on a clad nickel from an earlier year. Some YouTubers claim this coin is worth hundreds of thousands of $$$$$ but Heritage Auctions sold an MS 64 in 2008 for $1,840. That’s still a decent deal.

In Australia and the UK, they say pence instead of cents, and 1 pence is a penny. (We call our 1-cent a penny too, out of habit.) This Wrong Planchet Error was minted on an Australian 6p blank. It has the right color because the 6p is sterling silver. But the tips of the words are sliced off, giving the coin a truncated appearance. In AU 58, the coin sold for $1,055 in 2013.

Even in low grades, this 5-cent coin is worth at least $1 based on its melt value, because the coins have 1.75g of silver each. And most samples sell for about $20 in MS 65. But high-grade coins and error coins can be worth a lot more, especially if they have full steps. The best price to date is the 1c Wrong Planchet Error on a 1943-S MS 65. It sold for more than $18,000!

All War Nickels (1942 to 1945) are rare because they had such a short run, were recalled after the war and were the only silver nickels made since 1873. But the 1943 Silver Nickel is extra valuable. It doubles as a War Nickel and a Jefferson Bicentennial Nickel – President Thomas Jefferson was born on 13th April 1743. This Founding Father served as the 3rd US President.

I have Lincoln cents, nickels, dimes, Quarters. Kennedy halfs. What have you.