The first Walking Liberty half dollar originates from the beginning of the 20th century, and its minting began in 1916. Its popularity stems from its beautiful design, and this lovely coin is still highly valued on the coin market, although its production stopped in 1947.

The 1943 half dollar value depends on several factors, including the mint mark and preservation level. Since the coin is almost 80 years old, well-preserved specimens are scarce, making them increasingly collectible and sought after on the coin market.

History of the 1943 Walking Liberty Half Dollar

The Walking Liberty half-dollar appeared in 1916 and replaced the previous Barber half-dollar. Although the US Mint minted these coins 31 years, it is almost impossible to find them in circulation nowadays.

In 1915, Robert W. Woolley became the new director of the US Mint. After taking office, he concluded that the law obliged him to replace the design of coins that had been used for a quarter of a century. Because of this, he initiated a process to replace the coins designed by the mint’s chief engraver, Barber.

That is why he hired the Commission of Fine Arts to conduct a competition for new designs for quarters, half dollars, and dimes. In addition, Wolley decided to give Barber a chance and asked him to prepare a new coin design.

Unfortunately, the Commission for Fine Arts members didn’t like his conceptual solutions and rejected his work.

Instead of Barber’s design, the Commission chose the sculptors Polasek, Weinman, and MacNeil to finish the task. They needed to submit their proposals with a different half-dollar look.

Interestingly, they were not limited to one sketch but could present several suggestions for the same coin. After reviewing all the works, the Commission members chose Adolph Weinman’s design, but that solution exhibited several problems during the test sample minting.

Weinman noticed that the word LIBERTY didn’t come out well with the original design, so he did a redesign. At the same time, the Philadelphia mint superintendent helped solve the problem by slightly lowering the relief and adjusting the pressing force that struck the planchets.

This procedure caused these coins’ production delay, but they became popular quickly after finally being released in circulation.

Features of the 1943 Walking Liberty Half Dollar

The Walking Liberty half-dollar is one of the US Mint’s most beautiful coins, but the design complexity created numerous problems during minting. Therefore, the first signs of wear quickly appeared on their surface.

The obverse of the 1943 Walking Liberty half-dollar 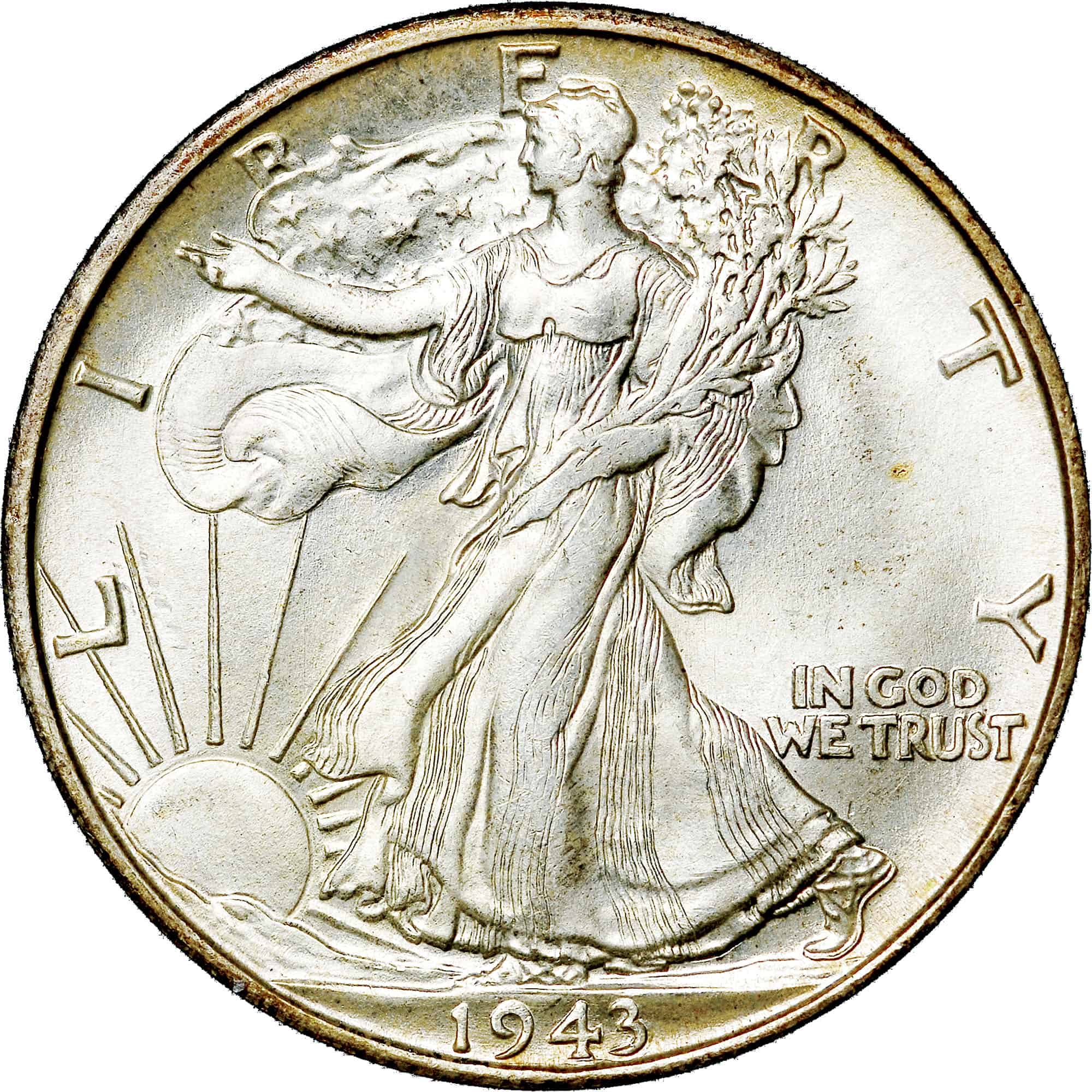 On the coin obverse, you can see a full-length portrait of Liberty in motion while stepping toward the rising sun. In her hands, Liberty carries laurel and oak branches that symbolize American greatness and the country’s glory in the military and civil spheres.

Lady Liberty is in a flowing dress and carries an American flag over her shoulder while her right-hand points forward and toward the sky. It symbolizes the freedom spirit in the new country.

The word LIBERTY is on the coin’s upper rim, while the phrase IN GOD WE TRUST is in the lower field of the right coin side. You can also spot the minting date, 1943, on the lower rim.

The reverse of the 1943 Walking Liberty half-dollar 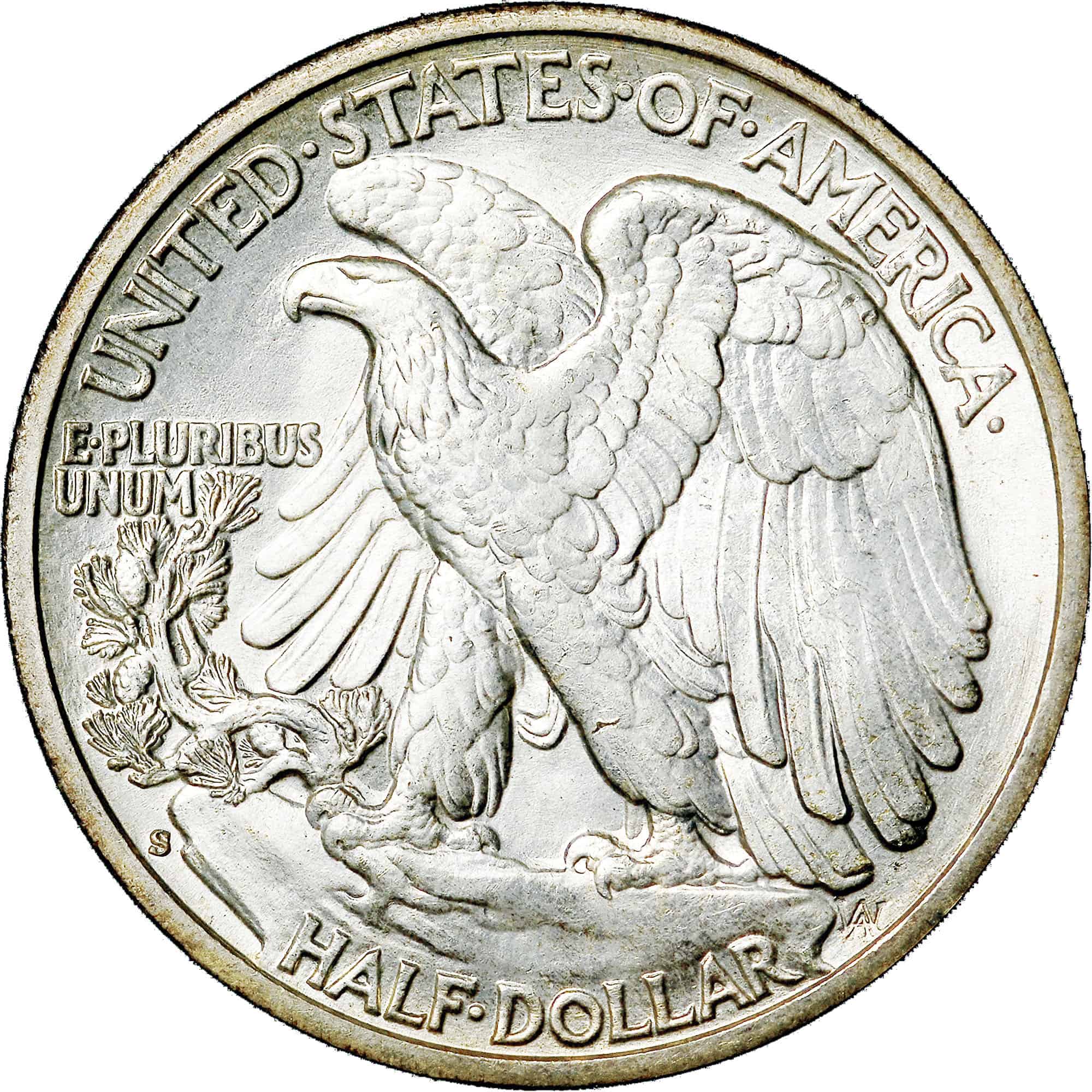 On the coin reverse, you can see the American’s bold eagle with spread wings resting on a mountain rock. This bird has represented the fearlessness and power of the American spirit from the new nation’s founding until today.

As you can see, the eagle holds a mountain pine sapling in its right talon, symbolizing America. Above the very top of the sapling is the Latin saying E PLURIBUS UNUM.

The UNITED STATES OF AMERICA is written on the upper rim above the head of the American bald eagle. Finally, the HALF DOLLAR denomination is struck on the lower rim.

Other features of the 1943 Walking Liberty half dollar

In 1943, the US Mint issued the largest circulation of the Walking Liberty half dollar, 77,986,000 pieces. Three mints minted these coins, and you can differentiate them by the mint mark only. 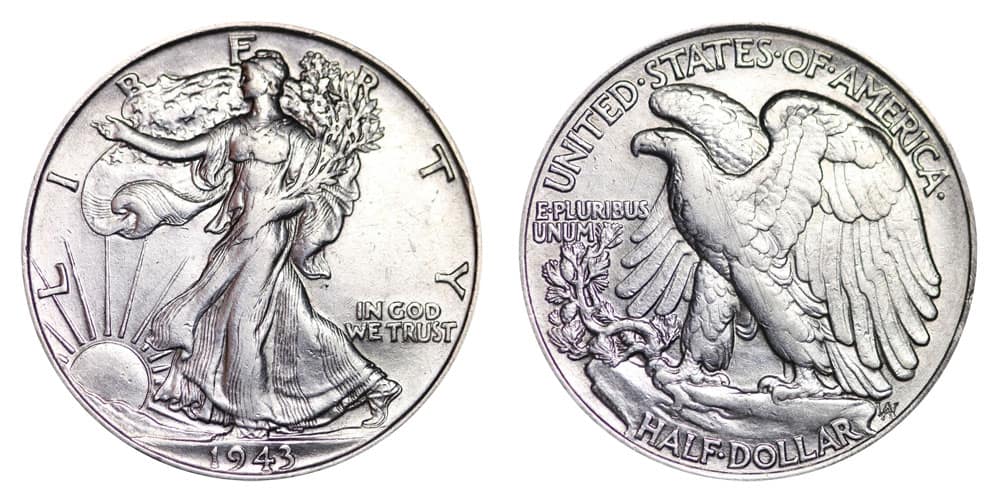 The Philadelphia mint minted more than two-thirds of the total mintage of 1943 Walking Liberty half dollars, as many as 53,190,000 pieces. You can’t see the mint mark on these coin reverse because this mint never marked its coinage in those times.

Extensive circulation ensures the high availability of these coins on the current coin market, making their value pretty low. Typically, you need to spend only $14 for a circulated piece in a decent condition. On the other hand, mint condition coins can cost you up to $25,000.

As usual, auction records are sometimes surprising. One collector paid a staggering $120,000 for a 1943 Walking Liberty half dollar in an MS 68+ grade.

The Denver mint had the lowest mintage that year. Only 11,346,000 half dollars from 1943 were marked D, making their distinguishing from other coins effortless.

Although the coins’ production is lower in Denver than in the other two mints, their value is not significantly different. In most cases, a circulated piece in average condition typically costs $14. On the other hand, some coins in the mint state can reach a much higher sum, around $24,000.

As you can guess, auction records for coins in the mint state are always high. For instance, one collector bought the 1943 D Walking Liberty half dollar graded MS 68 for $51,175. 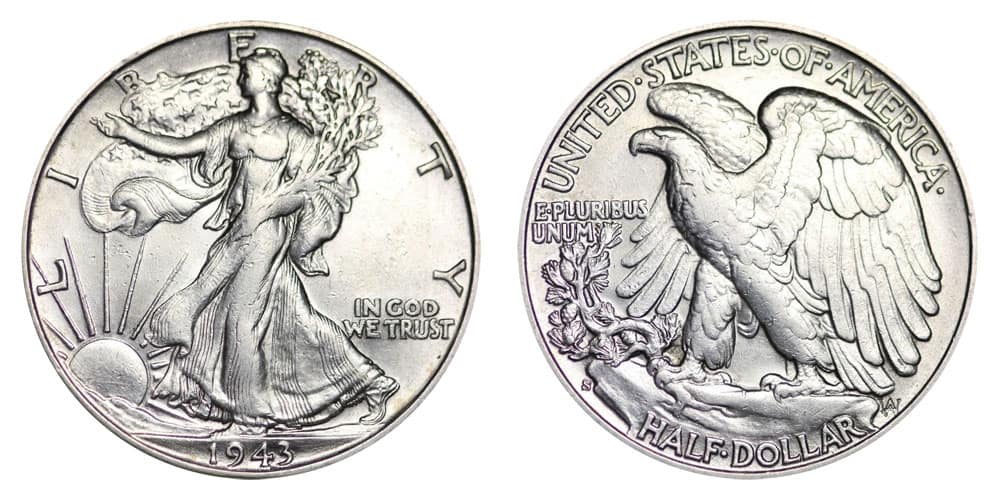 Precisely 13,450,000 Walking Liberty half dollars minted in 1943 had a struck S mint mark on the reverse. That number secured the second-largest mintage of these coins that year.

The price of circulated coins in average condition doesn’t differ from the value of those produced in Philadelphia and Denver. They are typically worth about $14, but an uncirculated coin is always worth more. Most collectors are prepared to pay approximately $5,000 for such a piece.

The situation is entirely different with auction records. For instance, one piece graded MS 67+ reached as much as $66,000 at an auction.

Numerous imperfections and varieties are possible with every minting and can be clearly visible or barely noticeable. Each 1943 Walking Liberty half dollar with an error has a significantly higher value on the coin market than regular pieces. 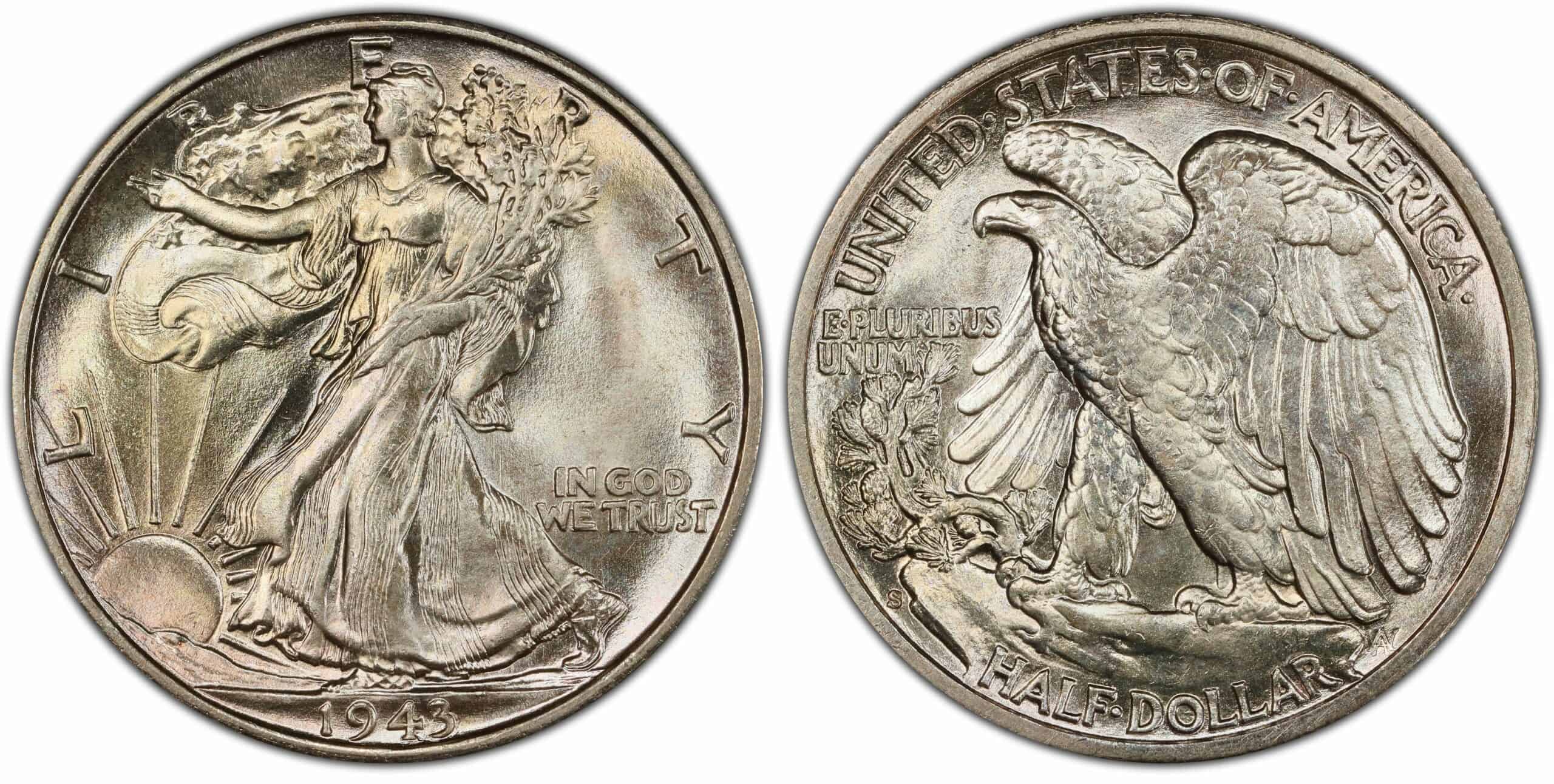 The US Mint didn’t produce proof coins during the war years, so the 1943 half-dollar mintage excluded proof specimens. However, you can notice that some coins come with a PL mark, identifying proof-like ones.

There is considerable similarity between proofs and those proof-like coins. It primarily refers to those with a higher degree of surface reflection, making them brighter than others.

The crucial difference between proofs and proof-like pieces is in the production method. The proof coins were always made on a highly polished planchet with a specially prepared die. Usually, the die was struck at least twice to ensure full visibility of all design details.

The proof-like coins were the result of striking a new or polished die on a particularly brilliant and beautiful planchet. However, the work process was not the same because the die struck coins only once, meaning the proof-like coin didn’t receive the same attention during the working process.

Nowadays, there are still a limited number of proof-like 1943 Walking Liberty half dollars on the market. Be aware that only specimens with the S mint mark can be in this group.

This common minting error occurs when the die strikes coins placed on an improperly set die. The error can be from 5% to 95%, depending on the strike distance from the center. Collectors appreciate specimens with more significant deviations, so the higher the percentage, the greater the coin value is.

1943 Walking Liberty half dollar struck on a quarter planchet

Coins with this error appeared when the die struck the quarter planchet instead of the one intended for minting a half-dollar. The cause was the human factor because of the relative similarity between these two planchets, so it was easy to overlook the error.

The US Mint created several coin issues for Peru during this period. Somehow, Peruvian half-cent coin planchets were left behind in the San Francisco mint, so half dollars were struck on them. Only two such coins are known to exist, and one was sold for $20,000.

This error is similar to the Peruvian one. The US Mint issued several coin series for El Salvador, and a few half-dollar coins were struck on a 25-centavos planchet during this process. These pieces’ value is significant and can reach approximately 15,000 dollars.

FAQ about the 1943 Walking Liberty Half Dollar

The 1943 half-dollar mintage is nearly 78,000,000 pieces. For these reasons, these coins are widely represented on the coin market, and it is practically impossible to find rare specimens besides errors.

Which 1943 Walking Liberty half-dollar is worth a lot of money?

How much is 1943 No Mint mark Walking Liberty half-dollar worth?

You can find a circulated 1943 half-dollar from the Philadelphia mint in average condition for as little as $8. On the other hand, specimens in the mint state range in price from $28 to $25,000, depending on quality.

What is the rarest 1943 Walking Liberty half-dollar?

The 1943 S Walking Liberty half dollar struck on a Peru 1/2 Sol planchet is the rarest coin from the series. Experts estimate that only two specimens still exist. That is why they attract collectors ready to pay as much as 20,000 dollars for one.