The quarter that was struck in 1942 is nicknamed the Washington quarter. But is it valuable? And what marks an interesting coin out from a standard one?

That’s what we’re here to investigate! We’ll look at the 1942 quarter value, and the factors that influence it. And we’ll find out more about the history and key features of this interesting coin.

History of the 1942 Quarter

The first Washington quarters were produced to mark the bicentenary of George Washington’s birth. The first president of the United States of America is shown on the obverse.

The coins made in 1932 were struck on planchets that were 90 per cent silver. The remainder was copper, designed to add strength. The composition was to remain the same for over thirty years, and all 1942 quarters are mostly silver.

In 1965, silver was removed from the Washington quarter. The new coin used a recipe that’s still in place today – a copper core with a cupronickel cladding that gives it a silver color.

Aside from the date, you can often distinguish a 1942 quarter from later coins by looking at the edge. The 1942 coin will be silver all the way. On coins struck after 1965, you may well see the copper coming through where the plating has worn away.

It was the first mintage of Washington quarters to break the 100 million mark. But despite this, the number of coins known to exist in “gem” condition (MS65 or above) is surprisingly low. Maybe the large mintage meant collectors didn’t expect it to become valuable, so fewer coins were stored carefully away.

Features of the 1942 Quarter

The Obverse of the 1942 Quarter 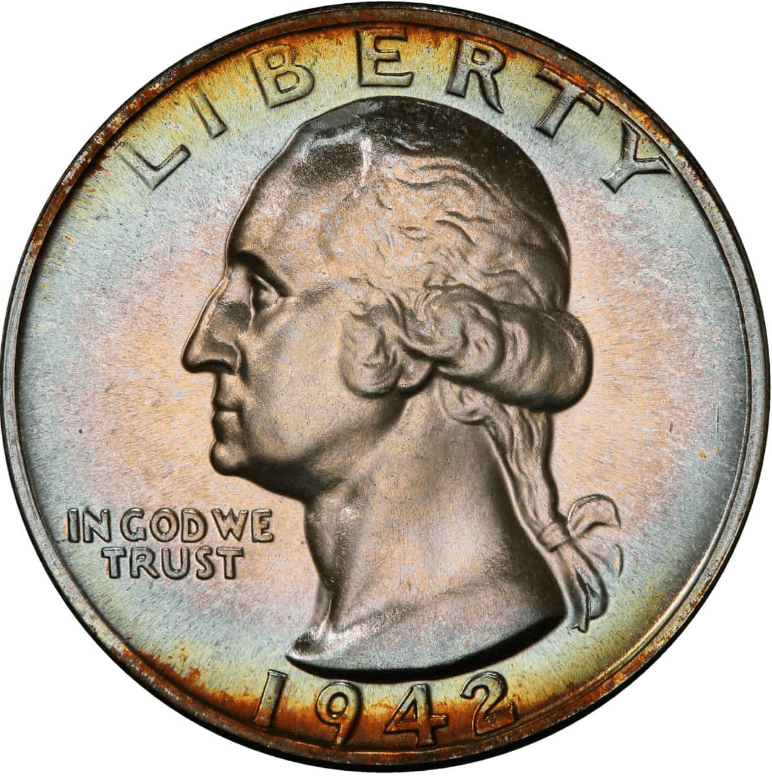 The obverse (or “heads” side) of the Washington quarter is responsible for its nickname. It shows a bust of George Washington in profile, facing to the left.

The image was the work of an artist called John Flanagan. But his selection wasn’t without controversy.

As the bicentenary of Washington’s birth drew near, plans were put in place to mark the occasion. One of those was for a new coin, a half-dollar, which would be struck for a single year.

A committee was set up to oversee the bicentennial preparations. They selected an image for the coin, a portrait of the former president by Laura Gardin Fraser.

But it was later decided that the Washington coin should be a quarter, and a permanent addition to the currency. As such, the task of choosing a design fell to the Treasury Secretary, Andrew W. Mellon. And while the committee argued for Fraser’s design, Mellon preferred the portrait by Flanagan.

A new Treasury Secretary, Ogden L. Mills, took up post before the coin’s launch. The committee tried once more to persuade him to go with Fraser’s portrait. But Ogden refused to reopen the decision.

Look closely at the cut-off of the image and you’ll see the initials “JF” for John Flanagan.  Above the portrait is the word “Liberty” and at the bottom of the coin is the date. The motto “In God We Trust” appears to the left of Washington’s neck.

The Reverse of the 1942 Quarter 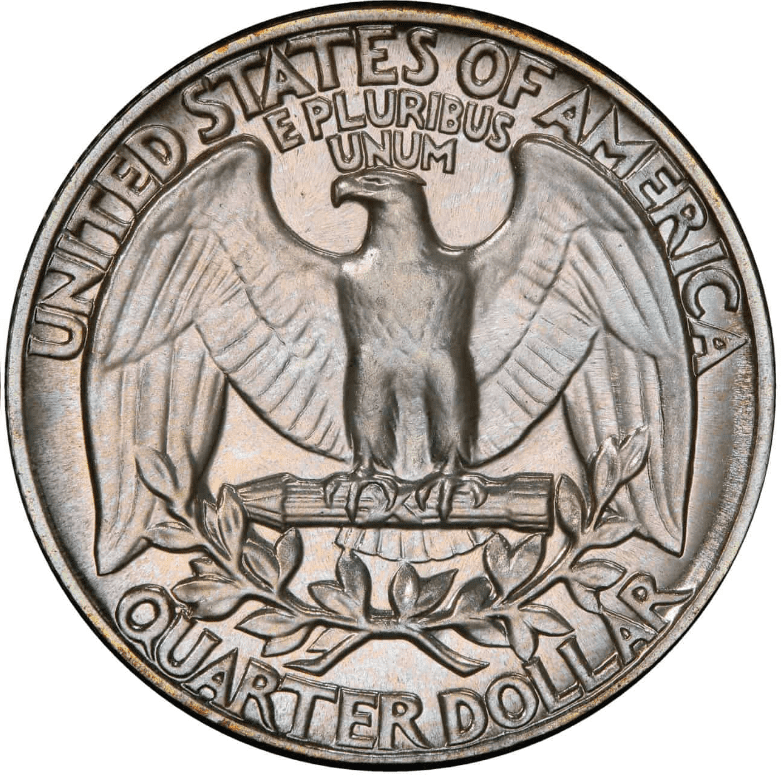 The reverse of the 1942 quarter, like the obverse, carries the same image as the very first Washington quarters. It shows an eagle perched on a fletch of arrows, its wings outstretched. And also like the obverse, it’s the work of John Flanagan.

It’s a bold design that uses almost every part of the coin surface. The curve of the eagle’s wings follows the curve of the coin edges. And there’s just enough space left to fit the words “United States of America” between them and the rim.

Immediately above the eagle’s head the Latin motto “E pluribus unum” is inscribed on the horizontal. It means “From the many, one” and refers to the creation of the USA from the individual states.

Below the eagle Is an olive branch, symbolizing peace. And at the bottom, following the line of the coin edge, is the denomination “One dollar”.

In later years, the mint mark on Washington quarters was moved to the obverse. But in 1942 quarters, if there is one, you’ll find it on the reverse, just below the center of the olive branch.

Other Features of the 1942 Quarter

The 1942 quarter measures 24.3 millimeters across and weighs 6.30 grams. Although it’s the same size as the later copper quarters, it’s a little heavier. The different metal means the newer coins weigh 5.67 grams.

Turn it on its side, and you’ll see a series of grooves around the coin edge. These are known as “reeds” and they were originally added to coins in the eighteenth century. The idea was to make it obvious if anyone had reduced the coin’s value by shaving metal off the edge.

The typeface on the 1942 quarters isn’t quite as clear as in the coins minted from 1944 onwards. That year the dies were changed to give a sharper finish. The date was made slightly larger at the same time.

This YouTube video from Treasure Town looks in detail at the design of the 1942 quarter. And it covers error coins too. 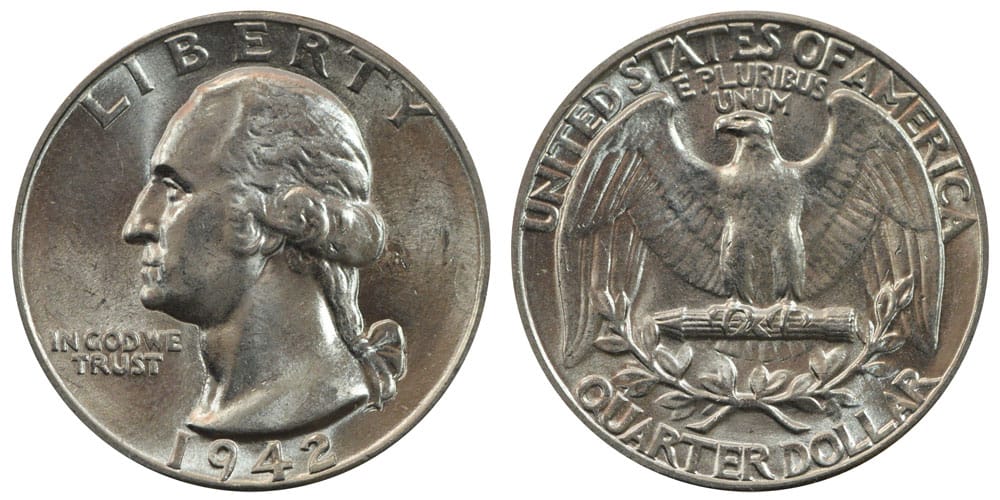 If there’s no sign of a mint mark on your coin, it was struck in Philadelphia. And the chances of that are pretty high – over 100 million quarters came out of that facility in 1942. That accounts for more than two thirds of the total.

Despite this, at lower grades, prices are roughly the same as for quarters from Denver or San Francisco. A Philadelphia Washington quarter graded “extremely fine” (XF45) will be worth around $7.

In mint state – i.e., coins that haven’t been circulated – values can still be modest. It’s possible to pick up a coin graded MS60 (the lowest mint state grade) for around $16. That rises to $36 for an MS65 example, the lowest level “gem quality” coin.

The finest quality examples known to exist are graded MS67+ by the PCGS, and are valued at $1,850. The relatively modest price tag reflects the fact that 21 coins have so far been graded at that level.

Of the three facilities that struck 1942 quarters, Denver produced the fewest. Over 17 million quarters were nevertheless struck there – so finding a Denver mint mark doesn’t itself mean the coin is rare.

In circulated grades, values are similar to the Philadelphia quarter. Up to XF45+, a 1942 D Washington quarter is valued by the PCGS at $7. That increases to between $10 and $16 for “about uncirculated” coins (AU50 to AU58+),

In mint state, values begin at $18 for an MS60 example. Gem quality coins at MS65 carry a premium over Philadelphia quarters, valued at $50 compared to $36. But at MS67, prices converge again, with quarters from both facilities valued at $575. 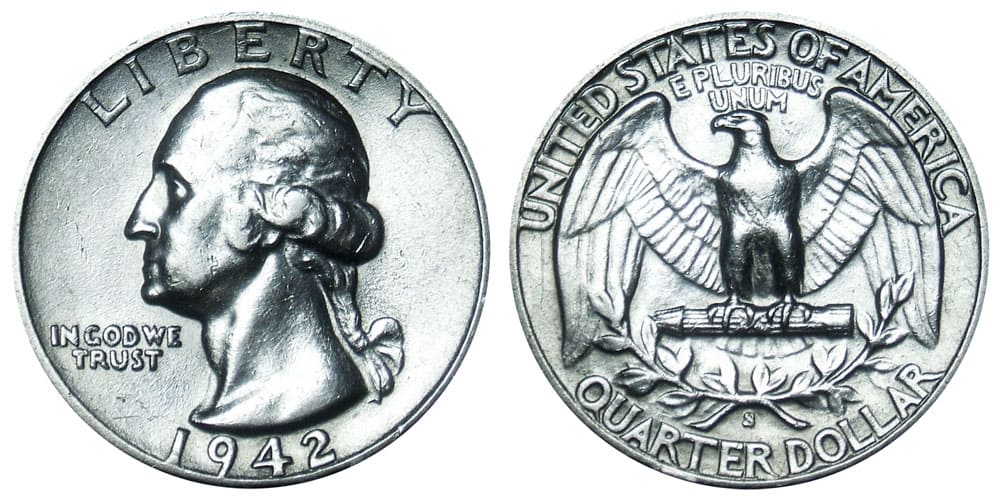 The San Francisco mint facility was responsible for striking over 19 million quarters in 1942. And amongst them are some very fine coins indeed.

At lower grades, the value of an S-marked 1942 quarter is slighter higher than for those from other facilities. A coin in extremely fine condition will be around $9, while at MS60, the value is about $26.

At MS67, though, the value is considerably lower than for Philadelphia or Denver coins – $260 compared to $575. That’s because the San Francisco facility seems to have produced more quarters of higher quality. So an MS67 S quarter doesn’t have the cachet of a best (or almost-best) in class coin. 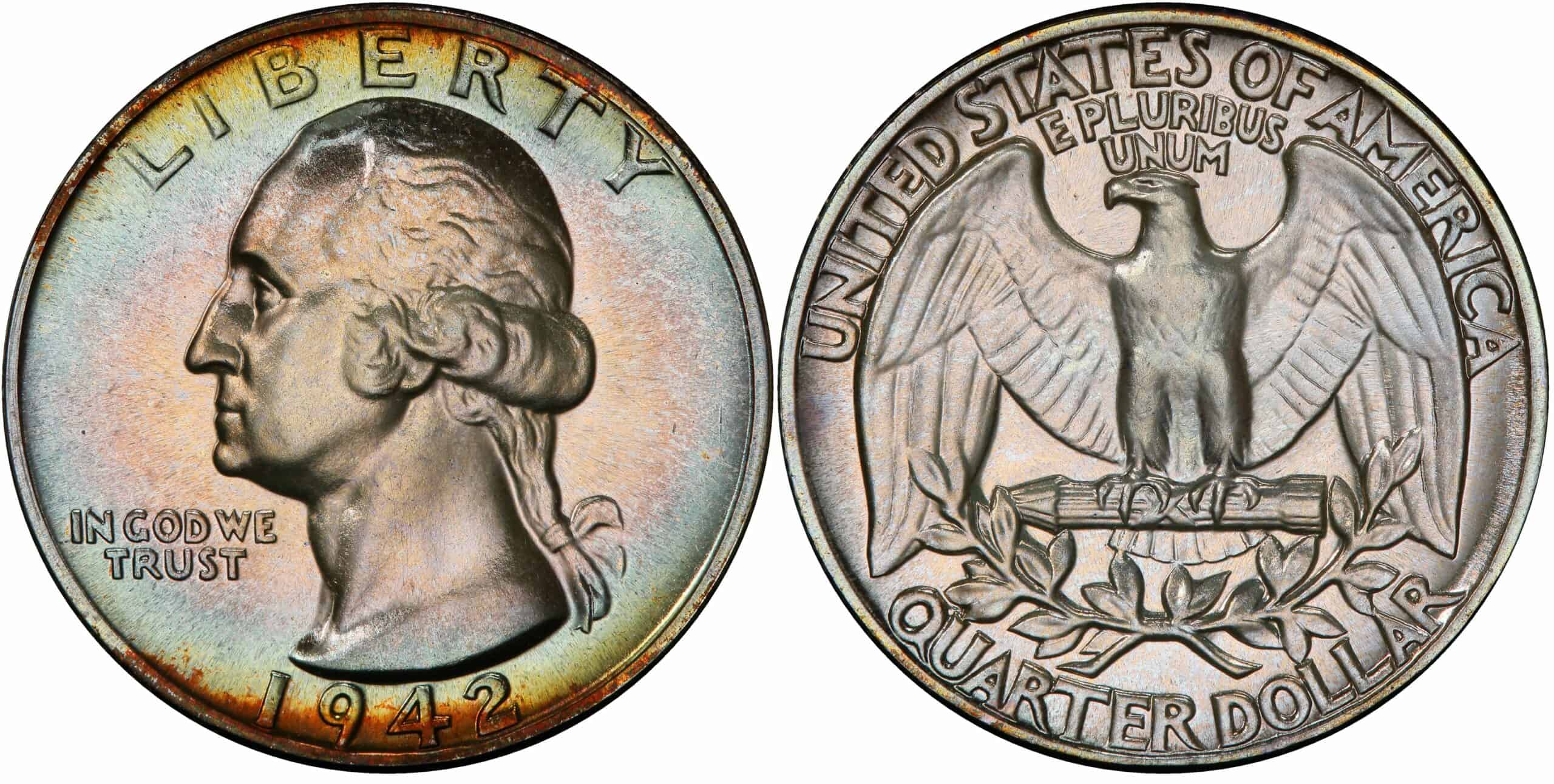 Philadelphia produced over 21,000 proof quarters in 1942, in addition to their regular or “business” strikes. These were made using specially crafted dies and highly polished planchets. But while they’re attractive coins, most aren’t as valuable as you might expect.

That’s because they were aimed at the collecting market. So most were taken good care of, and remain readily available. 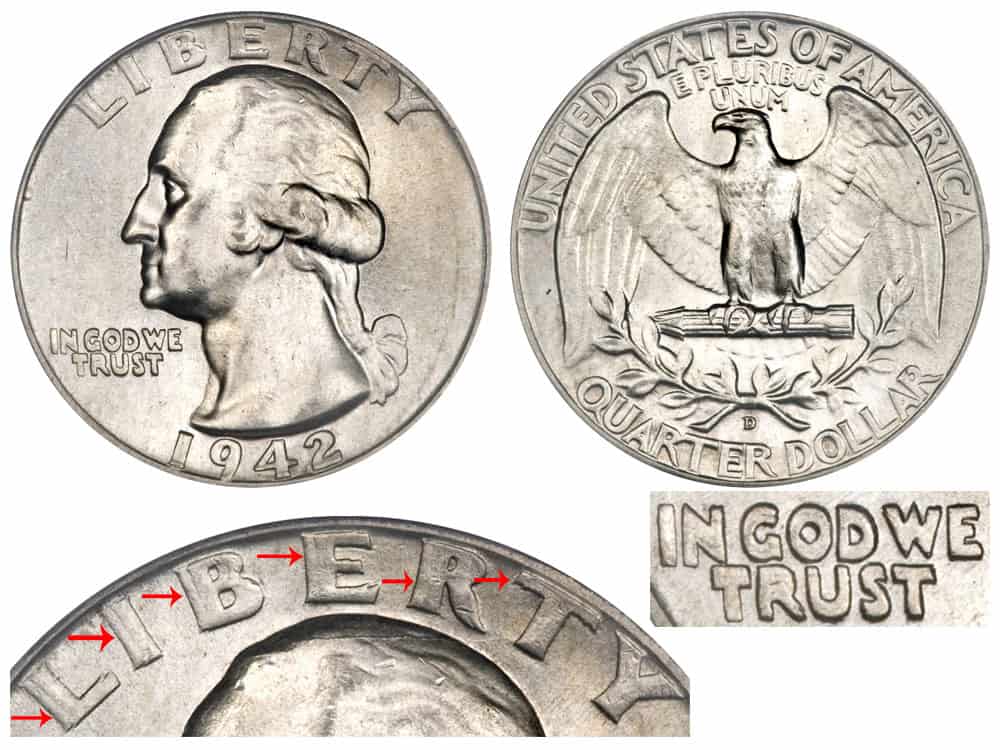 Double die errors result from an error made during the production of the obverse die. This happens when a die moves slightly as it’s being struck. (It has to be struck several times to capture every detail of the design.) That leaves a double image that’s then transferred to the coins.

Double die obverse coins may be catalogued with the abbreviation “DDO”.

Look for doubling on 1942 D quarters on the legends (the text) on the obverse. The thickened letters are easiest to see with a coin loupe or microscope.

If you find a coin with this error, the value will depend on its condition. But even at the lowest grades (“about good” AG3 to “good” G7) it will be worth between $50 and $100.

At the highest grades, you’ll be looking at serious money. The PCGS has graded two 1942 D double die obverse quarters at MS64, and they’re each valued at $8,000.

In other 1942 D quarters, there’s evidence of a double die error on the reverse (abbreviated to DDR in coin descriptions). And there are two different varieties here.

In the second variety (coded FS-801), the doubling is present on the olive branch, but is also strong on the eagle’s beak and the arrows. In poorer condition, the values for this are lower – $25 for an AG3, rising to $44 for a VG10.

But there are examples of this error graded all the way up to MS66+. And the single finest example is valued at $11,500.

This YouTube video from Couch Collectibles looks at these and other errors in 1942 quarters.

The answer to that can vary widely. Circulated coins will show signs of wear and tear and will usually be worth only a few dollars. But mint state coins in excellent condition can be worth hundreds, or even thousands.

Error coins can be valuable too. Both the Philadelphia and Denver quarters have double die errors on the obverse and reverse that add to the value. You’ll probably need a microscope to spot them though.

There are no mint marks on those struck in Philadelphia.  But for Denver and San Francisco quarters, look for a “D” or an “S” respectively. It will appear on the reverse, just below the middle of the olive branch.