The 10-cent coin minted in 1942 was one of a series colloquially known as “Mercury dimes”. But just what might one of these coins be worth? That’s what we’re here to find out!

We’re going to look at the 1942 dime value, and the different factors that affect it. And we’ll find out more about its history and interesting features too.

Ready to find out more? Just step this way!

The ten cent coins minted between 1916 and 1945 are known as “Mercury dimes”. They get their name from the appearance of Lady Liberty on the obverse. She’s shown wearing a winged cap, leading to many newspapers at the time mistaking her for the Roman god Mercury.

1916 marked the 25th anniversary of the dimes, quarters and half dollars that had been designed by Charles Barber, the Mint’s chief engraver. Legislation stated that, at this point, the Treasury could change the design without the approval of Congress.

But the Treasury misunderstood the relevant provisions. Rather than simply having the authority to make a change, they believed they were required to change the designs. A competition was launched for new designs.

Barber submitted an entry, but it was a new artist, Adolph Weinman, who was declared the winner of the contest for the dime. (Weinman was the most successful artist in the competition, having also been selected to design both sides of the dollar.)

The new dimes were struck in large quantities every year until 1930. Then the Great Depression diminished the need for new coins. And no dimes at all were struck in either 1932 or 1933.

1942 was notable for one of the varieties of dimes produced that year. It’s known as the 1942/1 overdate, although strictly speaking, it isn’t an overdate at all. Take a look at the section on varieties and errors to find out more about it. 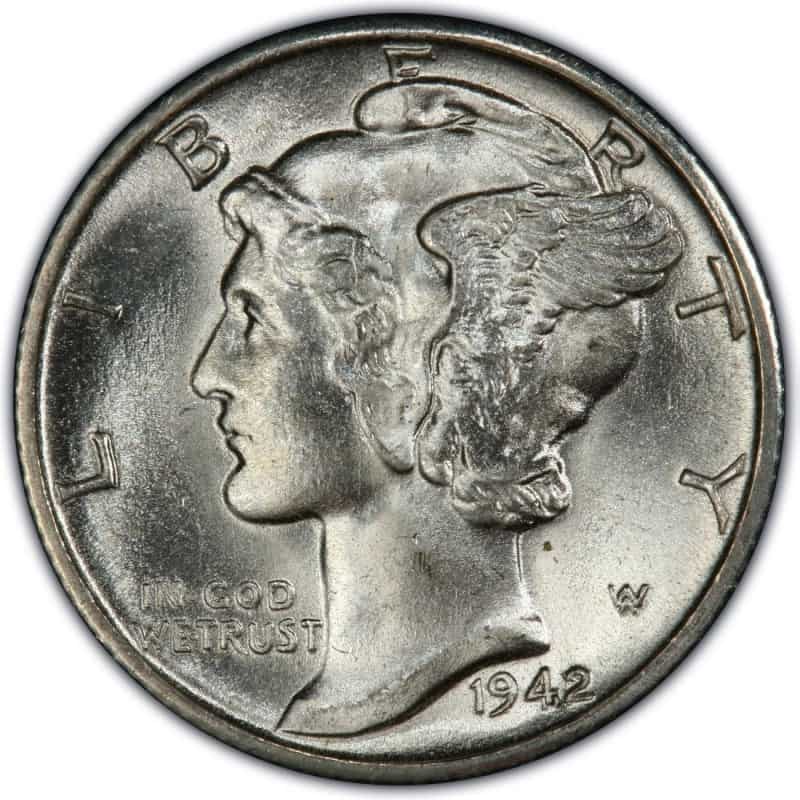 The obverse design of the 1942 dime is what gives it its nickname of the “Mercury dime”. The winged cap worn by Lady Liberty caused many newspapers at the time to mistake her for the Roman god Mercury. And they did so despite Liberty being very obviously female, while Mercury was male.

Some collectors also refer to the coin more correctly as the “Winged Liberty Head dime”.

The design was the work of Adolph Weinman. He never identified the model for Liberty, but it’s commonly believed to have been one Elsie Stevens. Elsie and her lawyer husband rented an apartment from Weinman in Manhattan.

Whoever she was based on, Weinman’s Liberty appears in profile, facing left. She has tight curls which emerge from the winged cap, known as a pileus. Weinman said that the cap represented “liberty of thought”.

The word “Liberty” curves around the top two thirds of the coin.  At the bottom, below and to the right of Lady Liberty’s neck, is the date. And mid-way between the two is the monogram “AW” for the artist.

The motto “In God we trust” appears towards the bottom of the coin, to the left of Liberty’s neck. 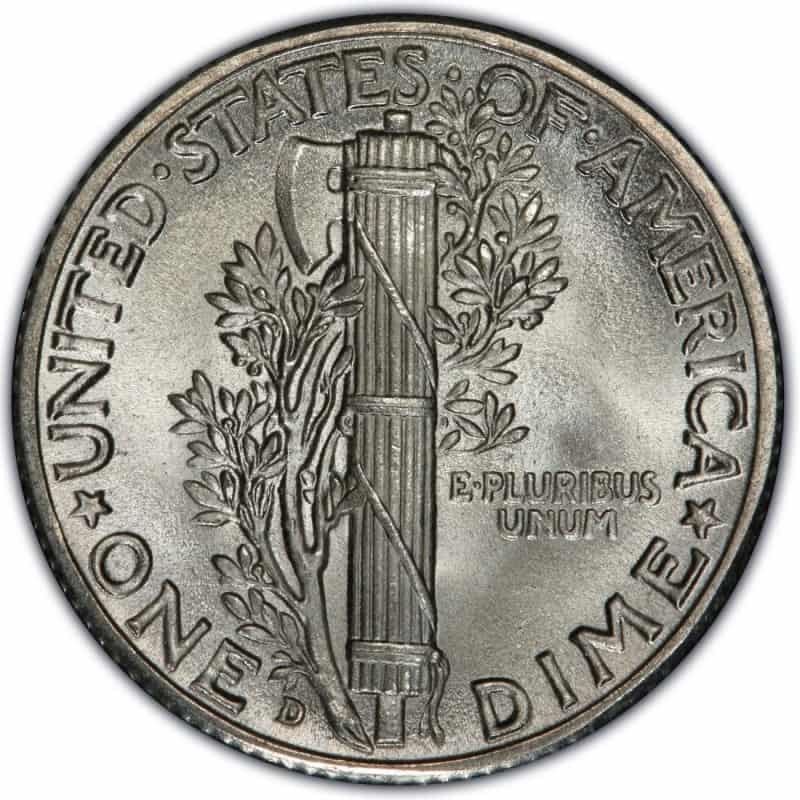 The reverse of the 1942 dime was also designed by Weinman. And it too has a distinctly Roman theme.

It shows a fasces, a bundle of sticks with an axe that was carried by lictors, the Roman magistrates’ attendants and bodyguards. It’s tightly bound with a leather strap, and represents war and justice. Curving around it is a large olive branch, representing peace.

The words “United States of America” follow the top edge of the coin. Separated from them by two stars, and curving around the lower edge of the coin, is the denomination, “One dime”.

To the right of the fasces is the Latin motto “E pluribus unum”, which appears on all US coins. It means “From the many, one” and is a reference to the creation of the country from the multiple states.

Other Features of the 1942 Dime

A sub-set of 1942 dimes are known as “full band” or “full split band” coins, and given the designation “FB”. This indicates that the coin was well struck, with an excellent level of detail. But what exactly are the bands here?

They refer to the bindings of the fasces which appears on the reverse of the coin. Look closely, and you’ll see two diagonal bands around the sticks, and three bands of horizontal straps. It’s the middle set of the horizontal bands that you need to focus on.

This middle binding shows two bands, one above the other. For a coin to be designated “full band”, the line separating the bands should be clear and run all the way between them.

All other things being equal, a full band 1942 dime will command a significant premium over one without the designation.

This YouTube video from BigDCoins shows you how to identify full band Mercury dimes. 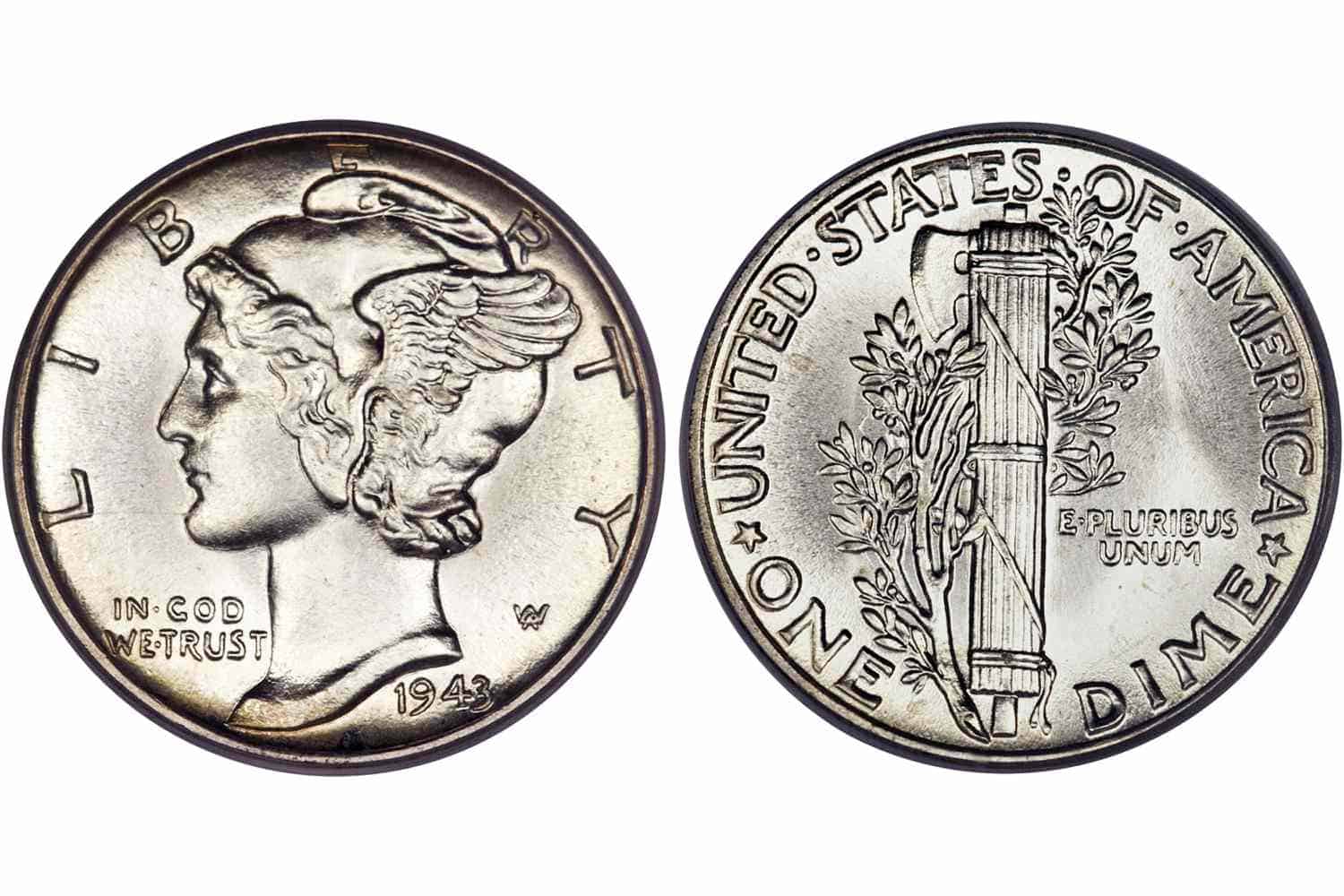 Over 205 million dimes were struck in 1942 at the mint facility in Philadelphia. That means it’s not too difficult to find them today. And unless there’s an error that makes an individual coin remarkable, circulated examples aren’t particularly rare.

The auction record for a mint state coin without the full band designation was for a coin graded MS68+ by the PCGS. It sold in 2018 for $4,800.

If you have a coin that shows a full band, however – a clear separation between the two bands in the middle of the fasces on the reverse – it can be worth considerably more.

Fewer dimes were minted in Denver than Philadelphia in 1942. But with a mintage of over 60 million coins, they’re still far from rare in circulated grades.

At most grades, prices are about the same as Philadelphia dimes. And here too, a full band designation will add significantly to value.

The premium at the highest grades, though, is slightly lower for Denver dimes. A coin graded MS67 will still be worth $125, the same as a Philadelphia dime. But while a full band designation increases that value to $400 for a Philly dime, a Denver MS67 FB dime is valued at just $275.

The San Francisco mint facility struck 49 million Mercury dimes in 1942. The value of circulated and mint state coins without the full band designation is equivalent to the dimes from Philadelphia and Denver. But full band coins can attract a larger premium at higher grades. 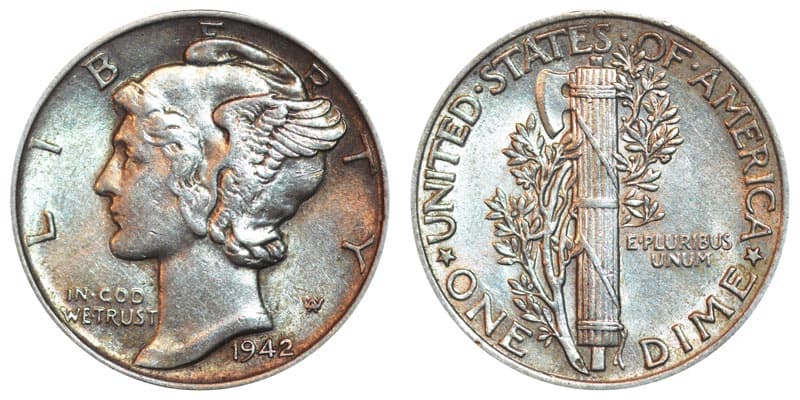 The Philadelphia mint facility produced proof dimes, as well as coins destined for circulation. Proofs were made using specially selected dies and highly polished planchets. They were the last proofs of the Mercury dimes to be struck.

Just over 22,000 were minted. And because they were targeted at collectors, they have largely been kept in good condition. That means they’re still easy to find today – the PCGS has certified almost 6,000 of them at all grades.

No deep cameo proofs have been certified. But for a cameo, you’ll have to pay four figures for anything graded above PR64+. And that rises to five figures for PR67 and above. 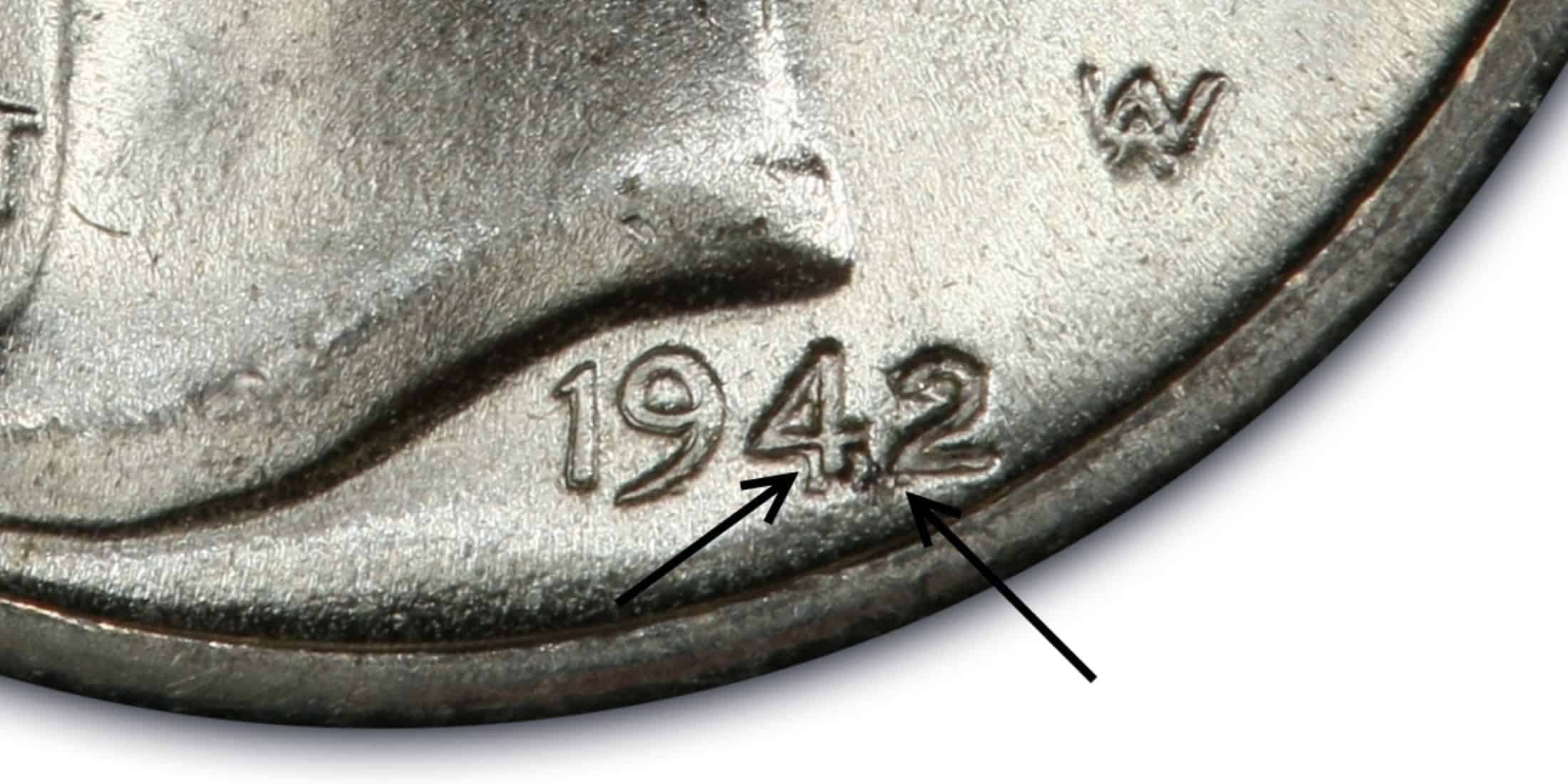 Overdated coins are those where the original date has been re-punched with a new digit. But although the 1942/1 dime is often referred to as an overdate, that’s not exactly true. In this case, the presence of both the final “1” and the “2” in the date is the fault of a die error.

Until the 1990s, dies had to be made with two strikes of a hub. The obverse die in this case took one strike from a hub with the date of 1941, and another from a hub dated 1942. The resulting coins were struck in both Philadelphia and Denver. And they’re highly sought after by collectors.

But add a full band designation, and prices rocket. Values enter five figures at MS60. And the finest known example, a single coin graded MS67 FB, is today valued at $125,000.

Some of the 1942 dimes struck in Denver have a re-punched mint mark. Look closely and you’ll see the shadow of the original mint mark at a slight angle beneath the later “D”.

Even examples of this coin in circulated condition can fetch good prices. A cleaned coin graded AU55 (“about uncirculated”) sold at auction for $630.

A good place to start is by looking at the quality of the strike. Look at the fasces – the bundle of sticks with the axe – on the reverse. You’ll see three sets of horizontal bands around the stick. Look at the two bands in the middle.

If the two bands are clearly separate, with a complete line between them, you have a “full band” coin. That’s likely to be worth some money. Exactly how much, depends on other aspects of its quality. The value could be anything from $15 through to rare examples worth many thousands.

Invest in a coin loupe or microscope and check out coin grading videos online to see how your coin compares. Or you can get it independently assessed by graders like the PCGS or NGC. You’ll have to pay a fee for that, though. So it’s only worth doing if you have good reason to think your coin could be really valuable.