The US Mint started striking Jefferson nickels instead of Buffalo nickels in 1938, and their production has continued to this day. The 1941 Nickel value is atypically high for a five-cent coin because it is in a group of the early, pre-war era series.

Even though three mints produced over 300 million nickel types in 1941, they are collectible nowadays. Unfortunately, intermediate and advanced collectors still don’t appreciate them, but they are excellent pieces for novices and enthusiasts.

History of the 1941 Jefferson Nickel

The first nickels appeared in 1866, and the US Mint has produced this coin type until today, except in three years, 1922, 1932, and 1933. After 25 years of minting, Jefferson nickels replaced the difficult-to-mint Buffalo nickel.

The decision was to make a nickel with the portrait of Thomas Jefferson, one of the Founding Fathers and the 3rd American President. Felix Oscar Schlag created the perfect obverse but had to make extensive corrections to the reverse side and change Jefferson’s house Monticello’s look.

The first minting year was 1938, and this coin design stayed unchanged until 2004. In 2006, the nickel got the new obverse designed by Jamie Franki, but Schlag’s coin reverse look stayed unchanged.

The 1941 Jefferson nickel produced during the first war year was the last one made of copper and nickel before the war ended. Due to the lack of nickel, the US Mint struck Wartime nickels made of copper, silver, and manganese from mid-1942 to 1945.

Features of the 1941 Jefferson Nickel

The obverse of the 1941 Jefferson nickel

German-born American designer and sculptor Felix Oscar Schlag designed the copper-nickel Jefferson nickel used from 1938 to 2004. On the obverse, you can see a portrait of Thomas Jefferson, the third US President and one of the Founding Fathers.

Besides the President’s profile facing left, you can see inscriptions along the coin obverse. The words IN GOD WE TRUST are on the left side, placed in front of his face, while the coin’s right side is reserved for the date. Above is the most beloved American word LIBERTY, separated from the date by a star.

The reverse of the 1941 Jefferson nickel 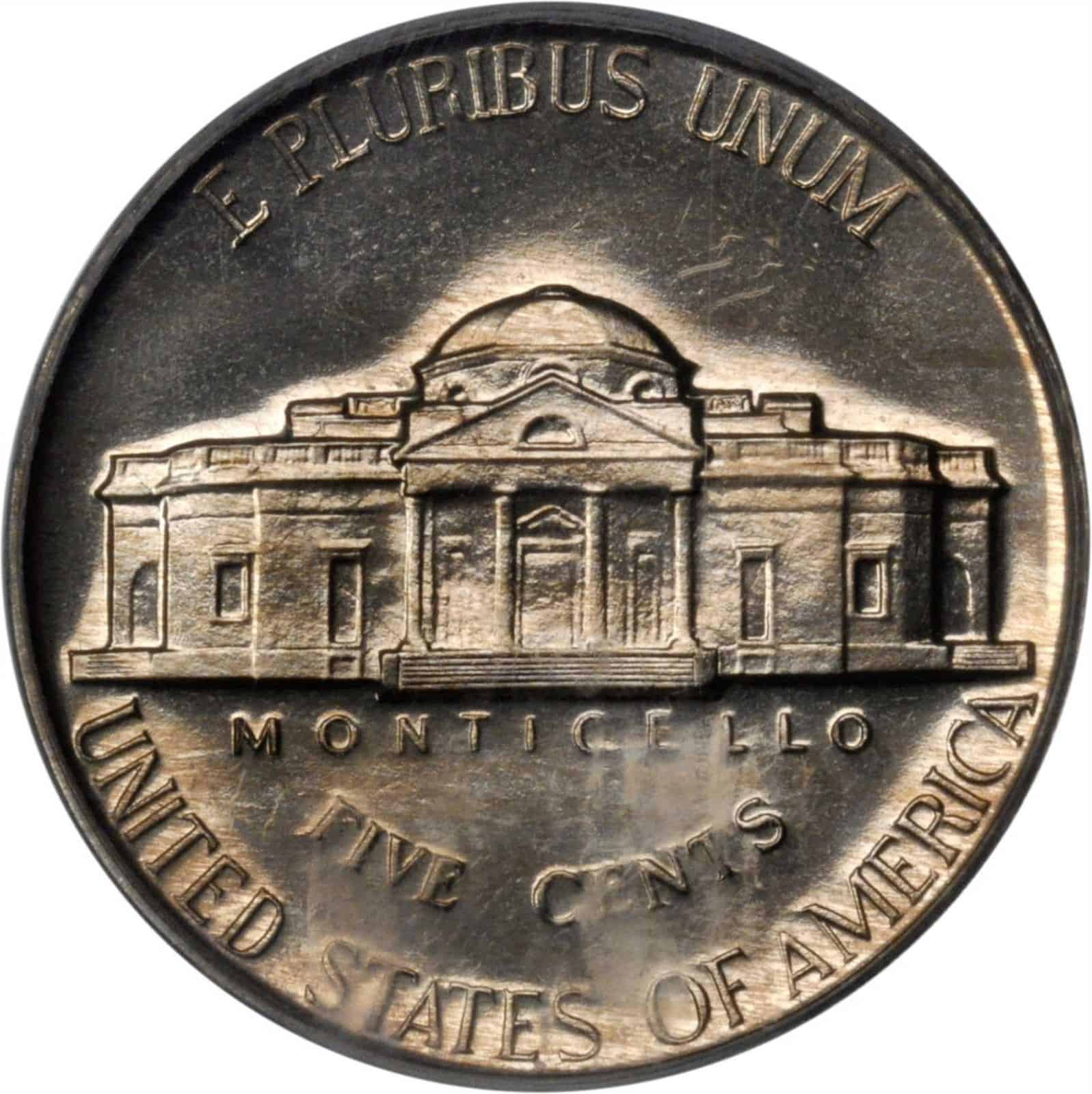 The US Mint organized a competition for a new 5-cent nickel coin design in early 1938, with a prize of $1,000 for the winning project. The primary request was that the historically significant Monticello, Jefferson’s beautiful home in Virginia, dominates on the reverse.

It was the first time for someone besides the Chief Sculptor-Engraver to design one American coin. Even though Schlag won that competition among 390 other contestants, he had to change the reverse side and rotate the house to be seen from the front. However, once revised, this design remained unchanged by 2004.

The Monticello house is in the center, surrounded by the Latin motto E PLURIBUS UNUM on the top coin rim. The bottom part is reserved for the house’s name MONTICELLO, the denomination FIVE CENTS, and the country name, the UNITED STATES OF AMERICA.

Nickels minted in San Francisco and Denver have small letters (S or D) between the Monticello and the right coin rim.

Other features of the 1941 Jefferson nickel

The 1941 Jefferson nickel pricing depends on the coin type and preservation level. The next step is to check the number of steps on the reverse since the Full Steps variety is rare and more expensive than a regular strike. 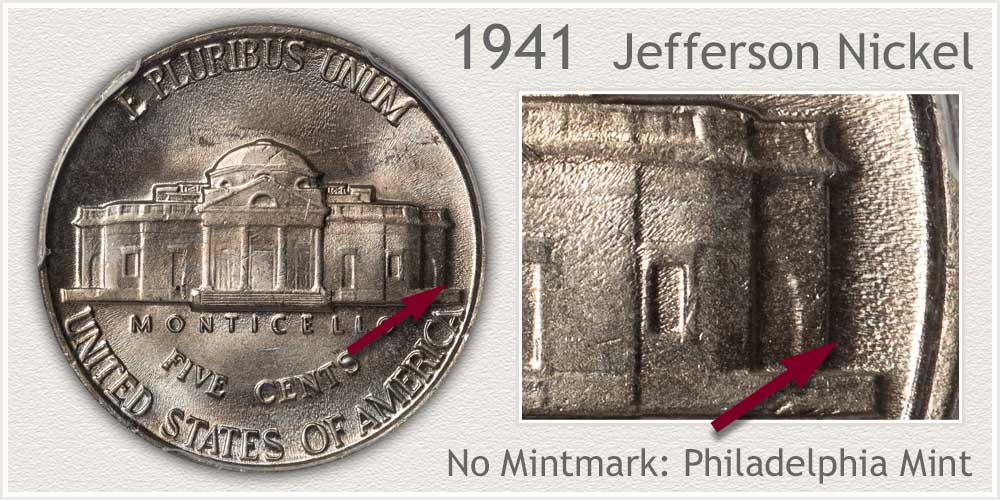 The Philadelphia mint produced a modest number of 18,720 Jefferson nickel proofs in the first war year. The US Mint prepared highly polished planchets and specially prepared dies, allowing each piece to be struck at least twice. Therefore, you can recognize even the tiniest details on these specimens’ surfaces. 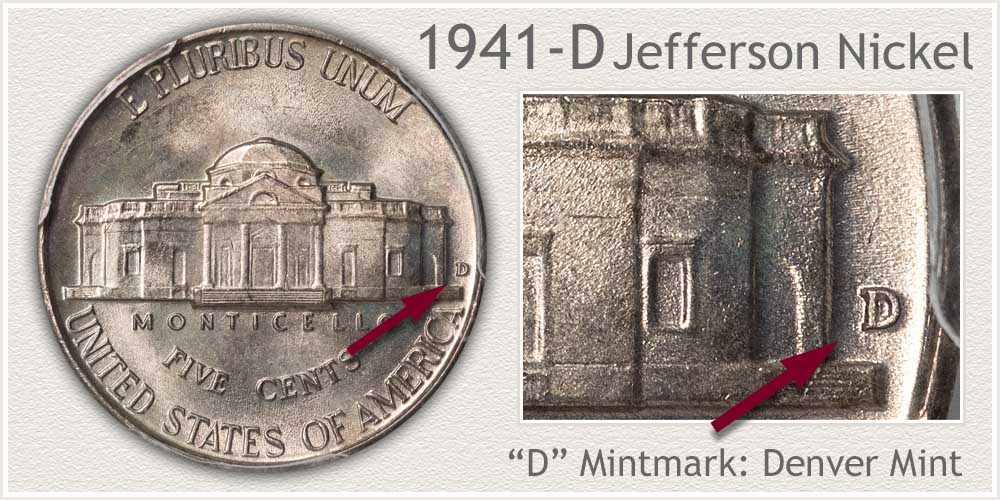 The San Francisco mint had the lowest mintage in the first war year and produced only 43,445,000 Jefferson nickels. You can recognize these coins by the letter S struck next to the Monticello house.

Besides regular coins, you can find a bit scarcer 1941 Full Steps Jefferson nickels on the market. These fully struck specimens are also a part of a circulation strike, but you can recognize at least five visible Full Steps at the Monticello base.

Only pieces in the mint state without weakly struck steps, traces of planchet problems, and contact marks can be in this highly collectible coin group. They come with 5FS or 6FS designations based on the number of visible complete steps.

All Full Steps nickels are rare, and collectors often pay more for those unique coins when finding them than for regular ones. For instance, you can buy pieces with MS 67 ranking without the mint mark for $325, while the most expensive are those struck in Denver in MS 68 grade. You can get an astonishing $5,000 for such a coin.

Commonly, the matrix hit 5% to 10% of the design outside the coin center, making an error that could increase such a nickel value. This piece typically costs $8 to $15, but those with 50% of missing design quickly reach $75 to $100+.

Since workers punched mint marks onto working dies by hand in the early 1940s, many mistakes occurred with small D and S letters. You can find coins with too-faint, sideways, or upside-down initial punches.

After re-punching, workers often caused doubling or tripling letters, but some collectors reported even pieces with quadrupled marks. Most of these coins are worth $3 to $5, but collectors will pay at least $25 for specimens with more drastic errors.

Experts estimate that there are a few 1941 Jefferson nickels with doubling. However, finding an error that stands out or significantly increases the coin value is practically impossible. Most of them will cost as every regular piece available on the market.

Once planchets used for striking coins became too old, they started cracking. Since these cracks cut into the die surface often remained unnoticed for a while, they started making raised lines on the coin design. These coins’ price range is wide and is typically $1 to $100.

A die cud is the most appreciated die crack type, and you can notice it forming on the coin rim. In most cases, it is a flattish bump attached to the edge. Specimens with the most significant cuds can reach $100 to $150 at auctions.

FAQ about the 1941 Jefferson Nickel

What makes a 1941 Jefferson nickel rare?

Jefferson nickels with Full Steps are the most scarce and pricey pieces struck in 1941. However, you can also count on premium prices for some errors, including nickels with Die Cracks or off-center errors.

Their prices are often higher than the regular ones and can sometimes reach hundreds or even thousands of dollars.

Which 1941 Jefferson nickels are worth a lot of money (according to PCGS)?

How much is the 1941 No Mint mark Jefferson nickel worth?

Most 1941 No Mint mark Jefferson nickels cost $0.11 to $13, depending on their condition. Only proofs are a bit more expensive, and it is possible to find them at approximately $107.

What is the rarest wartime Jefferson nickel?