Do you have a 1941 half dollar? If so, you might be wondering how much it’s worth. That’s where we can help!

We’re going to explore everything you need to know about the 1941 half dollar value. We’ll find out about its history and design. And we’ll learn what features make one of these coins particularly interesting to collectors.

Ready to get started? Step this way!

History of the 1941 Half Dollar

1916 saw the production of the first half dollars to bear the design of a full-length, walking Lady Liberty. These quickly became known as “Walking Liberty” half dollars. The half dollar minted in 1941 belongs to this series.

The new coins came about as the result of an error. The then Mint Director, Robert D. Woolley, wrongly believed that he was required by law to replace coin designs that had been in place for 25 years.

The designs for dimes, quarters and half dollars were all reaching their 25-year birthdays. Woolley invited replacement designs from the Mint engravers, but none were found satisfactory. A competition was launched.

The winner of the competition for the half dollar was Adolph A. Weinman, a well-known sculptor and engraver. He was also selected to design the dime.

While the half dollar is considered one of the most beautiful of American coins, striking Weinman’s design proved difficult. Early production was halted when it became clear that the coins were causing problems in vending machines.

Weinman suggested a change, but the problem persisted. The Mint’s Chief Engraver, Charles E. Barber – who had designed the coins the new designs were replacing – suggested more drastic changes.

He shrunk Weinman’s design so that there was a larger blank area around the edge. And he inserted a beaded border around the outside. News of the changes worried Weinman, who felt that the size of the design was important to its impact.

Adam M. Joyce, superintendent of the Philadelphia Mint, believed Barber’s changes were unnecessary. He felt the vending machine problem could be solved by reducing the relief of Weinman’s design, adjusting the strength of the strike, and better preparing the planchets.

Joyce’s opinion won out, and working dies were crafted on that basis. The new coins were very popular with the public.

But the problems with production continued. Many Walking Liberty half dollars, especially those minted in San Francisco, exhibit weak strikes. And it was perhaps this which contributed to the decision to change the design. It was replaced by the Franklin half dollar in 1948.

Features of the 1941 Half Dollar

The Obverse of the 1941 Half Dollar 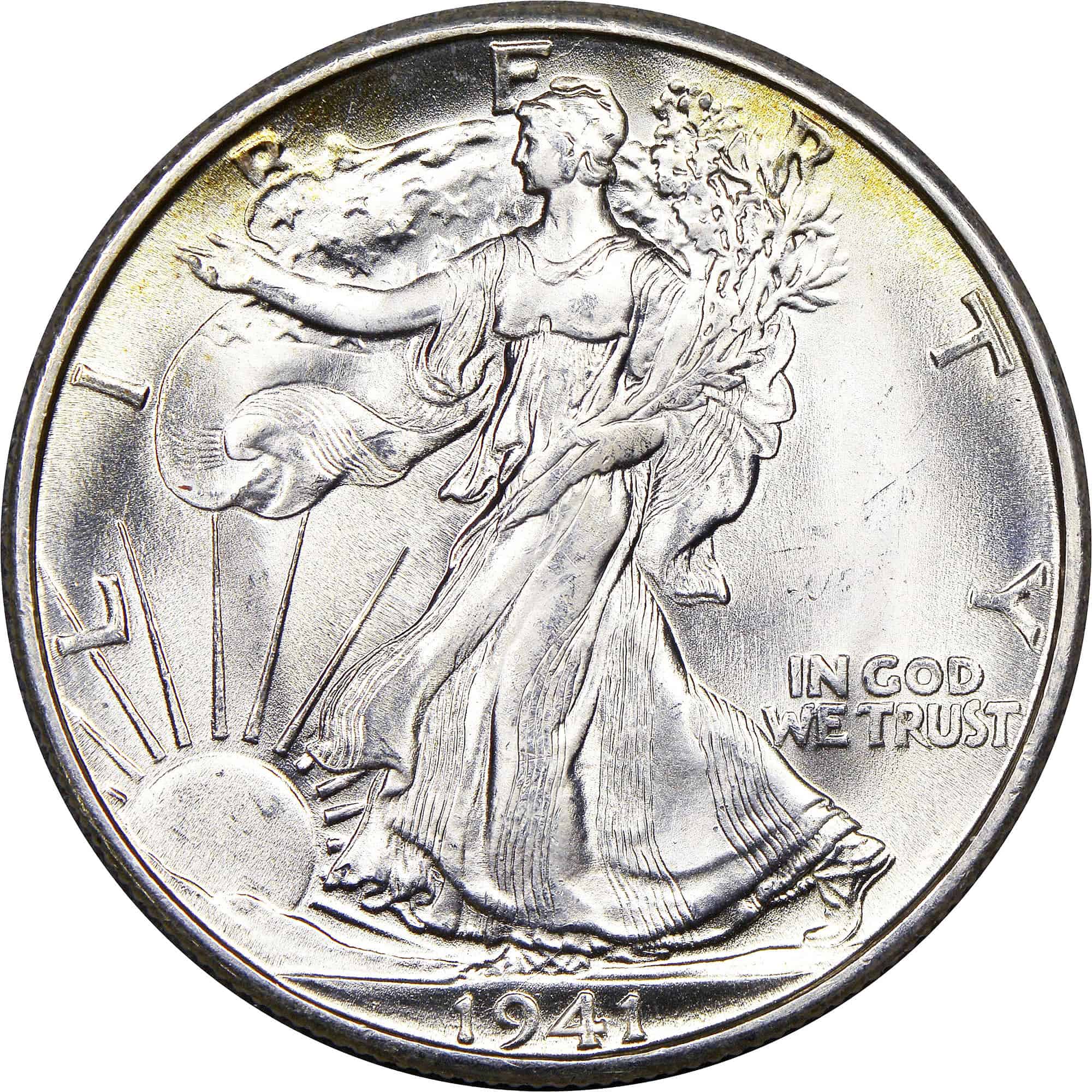 The obverse of the 1941 half dollar shows the arresting image of a full-length Lady Liberty. She is wrapped in the Stars and Stripes and carries an olive branch. She strides towards the left of the coin as viewed, her right hand outstretched. On the horizon is a rising (or possibly setting) sun.

During the design stage, various options had been tried for the placement of the word “Liberty”. Weinman had at one point proposed placing it to the right of Liberty’s body, just above the motto “In God We Trust”.

This would maximize the space available for the figure of Liberty herself. In the end, however, the word appeared above the eponymous figure. The “B”, “E” and “R” are partly obscured by her head and the flag. The date appears at the bottom of the coin.

In the first Walking Liberty half dollars, the mint mark for the Denver and San Francisco mints had appeared on the obverse. They were positioned to the right of the coin, just below the date.

But in 1917, it was decided to move the mint mark to the reverse. Most, but not all, Denver and San Francisco half dollars from that year have their mint mark in the new location.

The Reverse of the 1941 Half Dollar 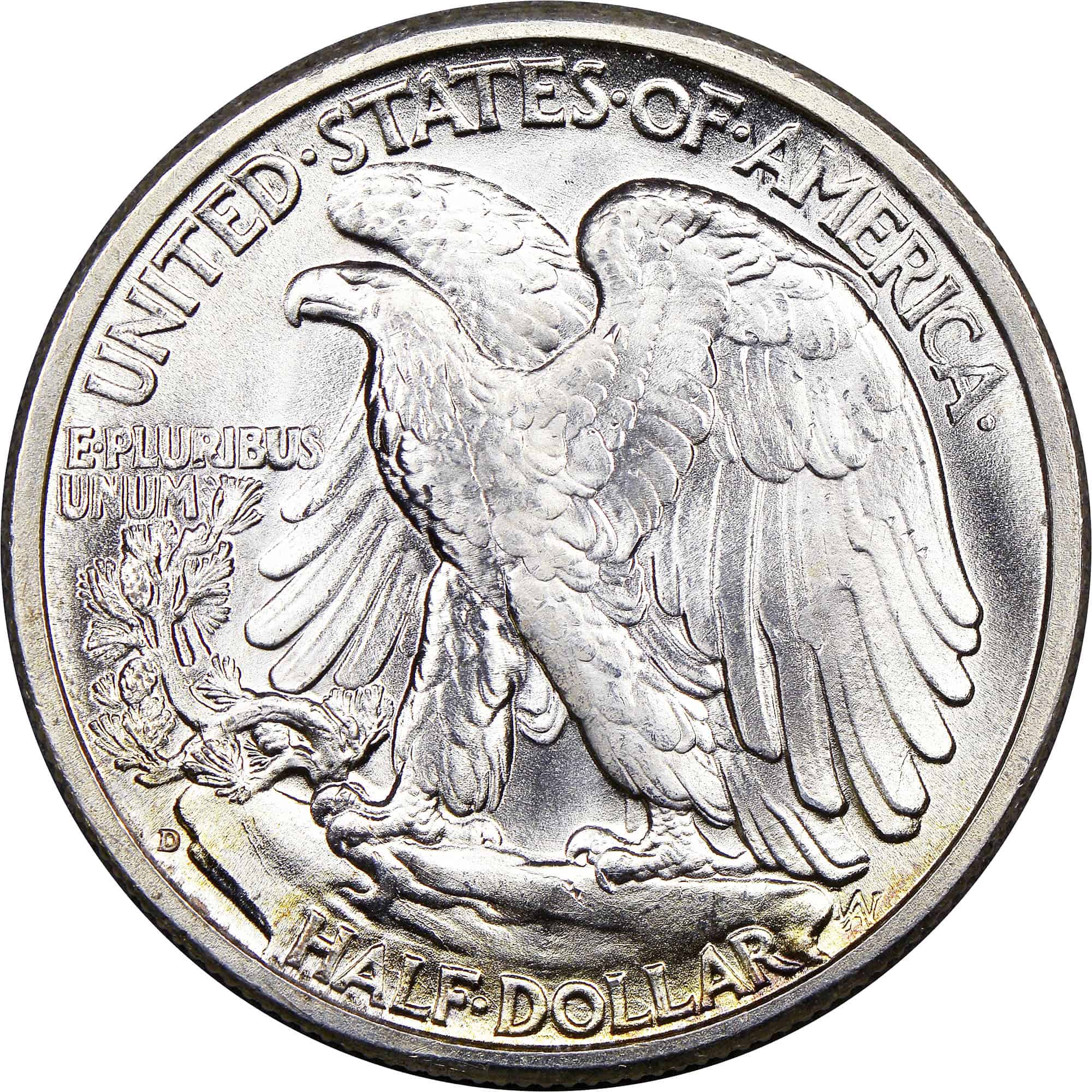 The reverse of the 1941 dollar was also designed by Weinman. It shows a large eagle perched on a rocky outcrop, wings raised, and one leg planted in front of the other. A branch sprouts from the edge of the cliff, identified as mountain pine. Like the bald eagle, it symbolized the USA.

While the coin was generally admired, the eagle caused some controversy on the coin’s release. There were arguments over whether it had been accurately portrayed. Some felt the feathers on its legs were rather too luxurious.

To the left of the eagle, inscribed between its breast and the edge of the coin, are the words “E pluribus unum”. The Latin motto means “From the many, one” and commemorates the union of the states.

The country name follows the top edge of the coin, while the denomination runs along the lower edge. Look closely, and you’ll see the monogram “AW” for the artist. It’s just along the coin edge from the “R” of “Dollar”.

Other Features of the 1941 Half Dollar

Each Walking Liberty half dollar is 30 millimeters in diameter and weighs 12.5 grams. It’s made of 90 per cent silver and 10 per cent copper. The precise weight and measurement may reduce slightly over time, as the metal is worn away.

Turn it on its side, and you’ll see what’s known as a “reeded edge”. The reeds are a series of grooves which run at right angles to the coin faces. They’re made by the collar that holds the planchet in place as the coin is struck.

As well as being decorative, they have a practical purpose. They were first introduced in the eighteenth century to prevent the practice of “coin clipping”. This was when slivers of precious metal were shaved from the coin edges, reducing its value.

This YouTube video from IrixGuy’s Adventure Channel takes a close look at one (rather worn) example of a 1941 Walking Liberty half dollar. 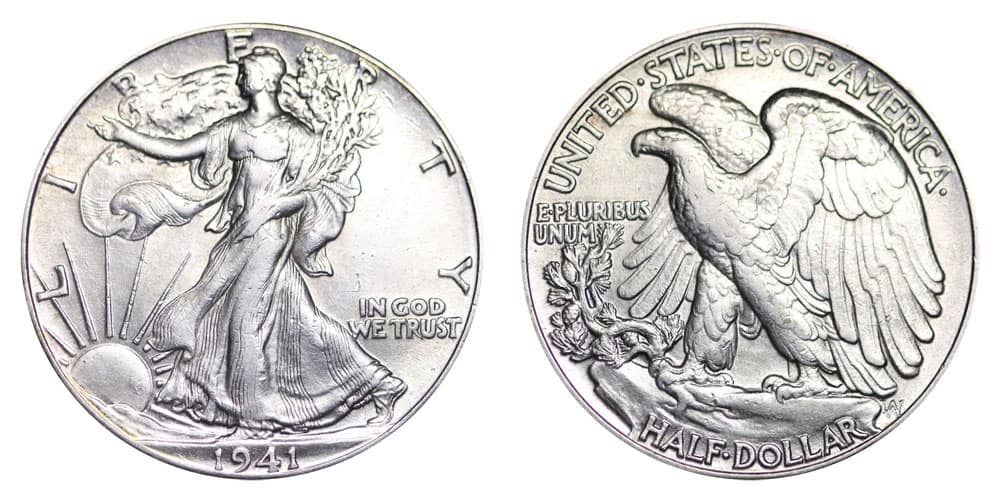 Over 24 million half dollar coins were struck at the Philadelphia mint facility in 1941. That’s well over half the total mintage for that year. If your half dollar was one of them, it won’t have a mint mark.

It’s possible to find one of these coins in nice condition without having to spend a fortune. The independent coin graders, the PCGS, value an “extremely fine” (XF45) example at just $24. And at MS60, the lowest grade for a mint state coin, the value is just $45.

If you want a gem quality half dollar, you’ll need to spend more. A 1941 (P) half dollar graded MS65 is valued at $150. At MS66+, the value jumps to $350. And at higher levels, coins become significantly scarcer – and hence, more expensive.

Less than half as many half dollars were struck in Denver as in Philadelphia in 1941. The mintage figure for the D mint mark is 11,248,400. Even so, circulated coins are in plentiful supply, and prices are about the same as for those without a mint mark.

In some mint condition grades, 1941 Denver half dollars carry a premium. At MS60, they’re worth $60, compared to $45 for the Philadelphia equivalent. And at MS65, the Denver coin is again one third more valuable, $200 compared to $150. 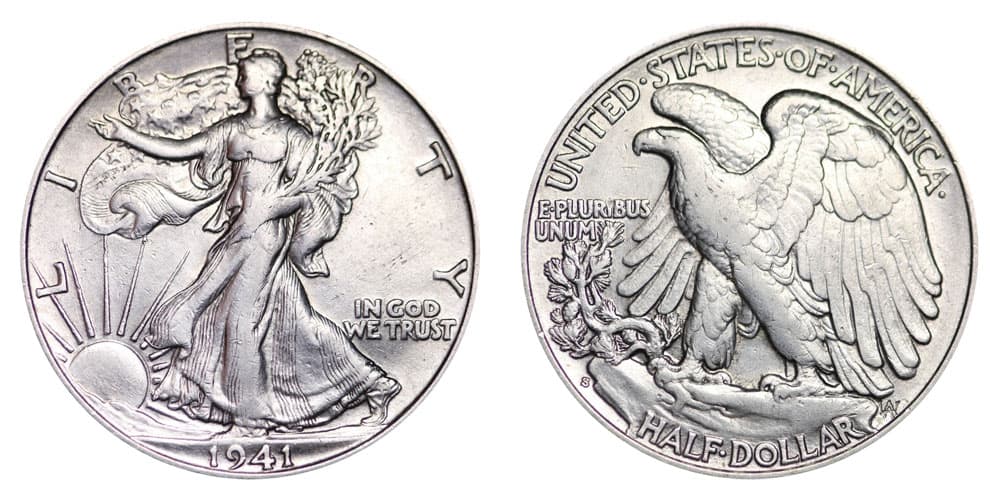 The San Francisco mint facility struck just over 8 million half dollars in 1941. Amongst them are rare examples designated “proof-like” in their quality.  The PCGS has graded just one proof-like 1941 S half dollar.  It was assigned a grade of MS64, but it hasn’t yet changed hands to record a sales figure.

In circulated condition, the 1941 San Francisco half dollar has about the same value as one from Denver or Philadelphia. But in mint state, it’s more collectable than either. 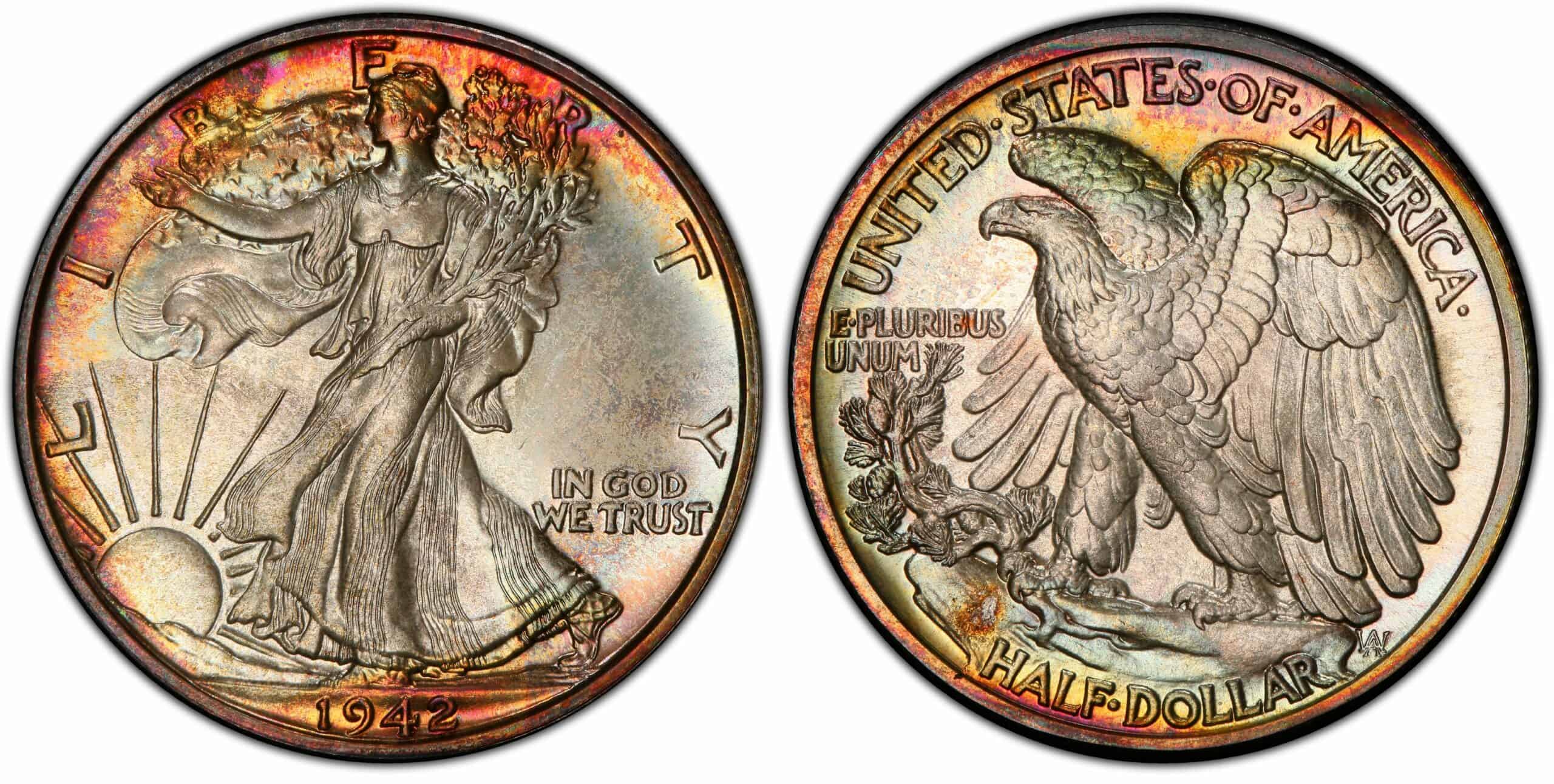 In addition to the coins produced for circulation, Philadelphia struck some 15,412 proof coins for collectors. It’s possible to get your hands on one of these for a relatively modest outlay. The lowest graded coins at PCGS are PR50 and valued at about $155.

The finest quality examples known to exist are graded PR69. And those are valued at $45,000 a pop. 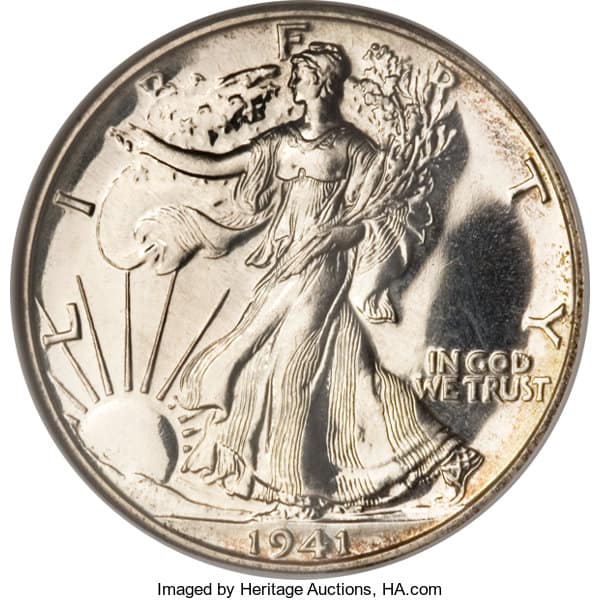 Amongst the 1941 proof half dollars are some that are missing Adolph Weinman’s monogram. This was polished off the die used to strike those coins.

Some of the dollars struck in both San Francisco and Denver have re-punched mint marks. This type of error is sometimes abbreviated to “RPM” in coin catalogs. You’ll have to look closely to spot it – we recommend using a coin loupe or a microscope.

The auction record a 1941 San Francisco half dollar with a re-punched mint mark was set in 2013. The coin in question was graded MS65 by the PCGS, and accredited by the CAC. At the time, a non-error coin of the same grade was valued at $700 by the PCGS and NGC. This one crossed the block for $2,585.

Occasionally coins get struck on planchets intended for another denomination. That was the case for one 1941 Philadelphia half dollar that was struck on the planchet intended for a quarter.

What year half dollars are worth keeping?

All silver half dollars have an intrinsic value. But the better the condition of the coin, the more valuable it will be. That’s more important than the year it was minted.

Any coins with an interesting error can be very valuable too. Look for coins with doubling or re-punched mint marks for extra collectability.

If your 1941 half dollar is from Philadelphia, it won’t have a mint mark. If it was struck in Denver or San Francisco, though, it will. Look for a small “D” or “S” respectively.

You’ll find it on the reverse, along the rim from the “H” of “Half Dollar”. It’s tucked just beneath the edge of the rocky outcrop on which the eagle stands.