The first American pennies were minted in 1787, and the old British term for this coin came from that time. Officially, it is a Lincoln cent, but most collectors still call it a Wheat Penny because of the wheat stalks on the reverse. The US Mint produced these coins from 1909 to 1958, when the reverse was redesigned.

Three mints struck regular coins on the eve of WWII. Typical for pre-war times, the Philadelphia mint had the highest mintage of pennies intended for circulation and also produced proof pieces. The 1940 Wheat penny value is modest in most cases, excluding a few pricey specimens.

History of the 1940 Lincoln Wheat Penny

As soon as the first Lincoln penny was released on 2nd August 1909, it became popular. It was a surprise for the authorities since the US Mint had never struck coins with a real person on the obverse before.

People stayed in long lines to get new pennies, showing the Mint that there was no limit to their demand. The only objection the Americans had was related to the designer’s oversized initials on the reverse. Therefore, it was changed later in the same year, and you can recognize two coin types, with and without initials.

Thanks to two wheat stalks on the reverse, the new penny got the Wheat Penny nickname almost immediately. The 1940 Lincoln wheat penny is considered the first war coin, but its significance stops there. It is abundant and relatively inexpensive, but collectors appreciate this date because of its historical importance.

President Roosevelt chose Victor D. Brenner to create a penny with President Lincoln on the obverse. It was contrary to the previous practice that real people couldn’t be depicted on US coinage. However, Americans loved the first pieces that appeared in 1909, and the US Mint has produced this coin to this day with a modified reverse.

The obverse of the 1940 Lincoln wheat penny 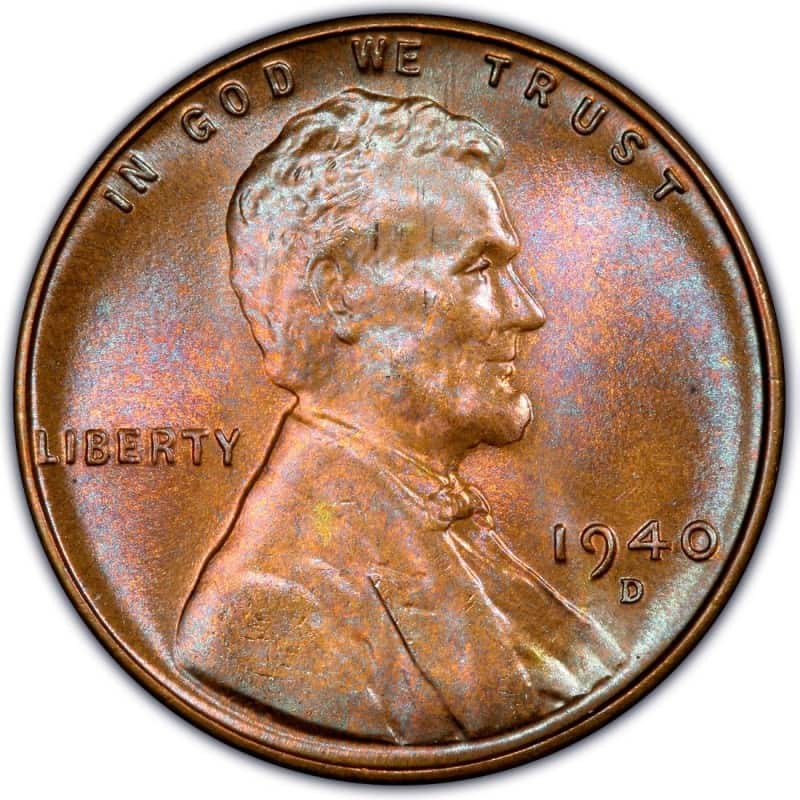 Like other pennies from the series, the 1940 Lincoln wheat penny has a favorite American President’s bust on the obverse. It is framed by the inscription IN GOD WE TRUST on the top edge without anything below, unlike many other US coinage.

However, both sides on the bust’s left and right are fulfilled. You can see the word LIBERTY struck on the left side, behind the President’s back. The DATE 1940 is positioned on the right, in front of his portrait.

The reverse of the 1940 Lincoln wheat penny 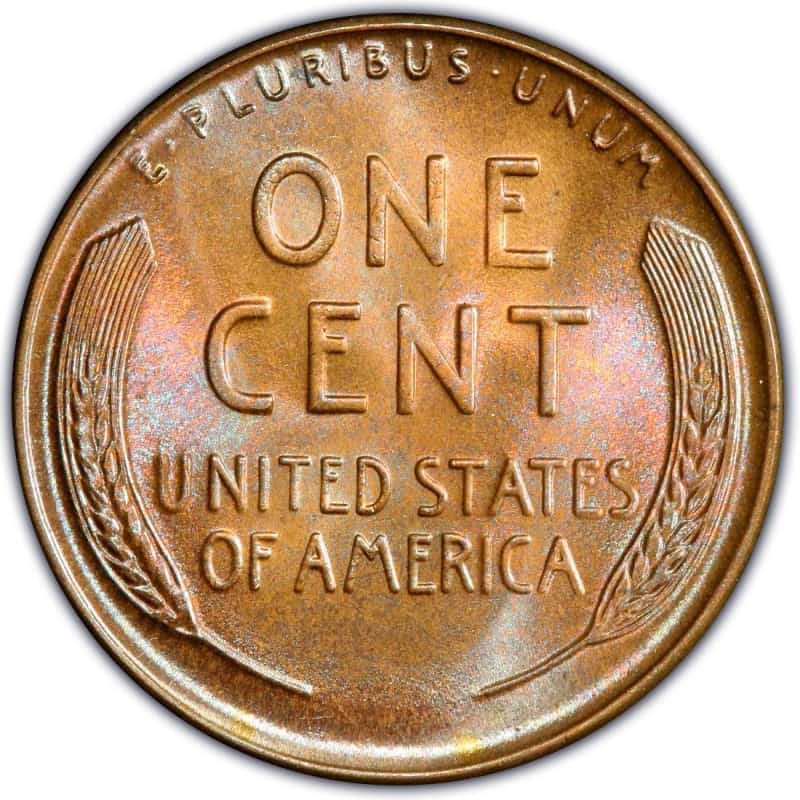 The simple and stylish reverse has two wheat stalks ‘responsible’ for the coin’s nickname. The design also includes a mandatory Latin saying, E PLURIBUS UNUM. In this case, it is struck along the top coin rim.

These stalks elegantly and unobtrusively surround the denomination ONE CENT placed in the center and the UNITED STATES OF AMERICA. The country name is divided into two rows and written in smaller font sizes.

Other features of the 1940 Lincoln wheat penny

The Philadelphia, San Francisco, and Denver mints produced 781,140,000 Lincoln wheat pennies in 1940. Almost two-thirds of the total mintage was struck in Philadelphia, including 15,872 proofs. 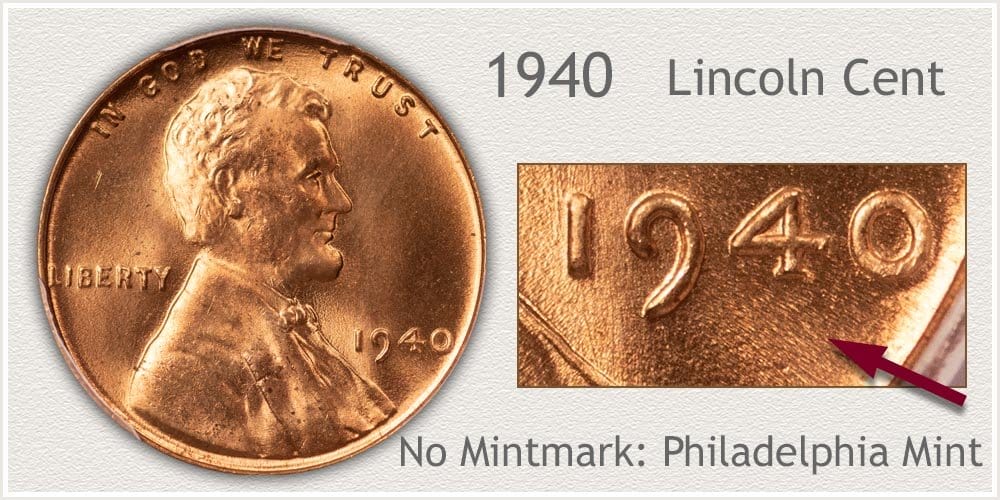 As usual, the Philadelphia mint had the highest mintage of all other mints and produced 586,810,000 Lincoln wheat pennies in the first war year. The average coin struck this year is typically inexpensive, and you can often buy them for less than $40.

Keep in mind that pennies with beautiful red toning can be pricey in the highest grades and cost a few thousand dollars. The most expensive red 1940 MS 68 Lincoln penny ever sold at an auction reached an impressive $14,950 in 2006. 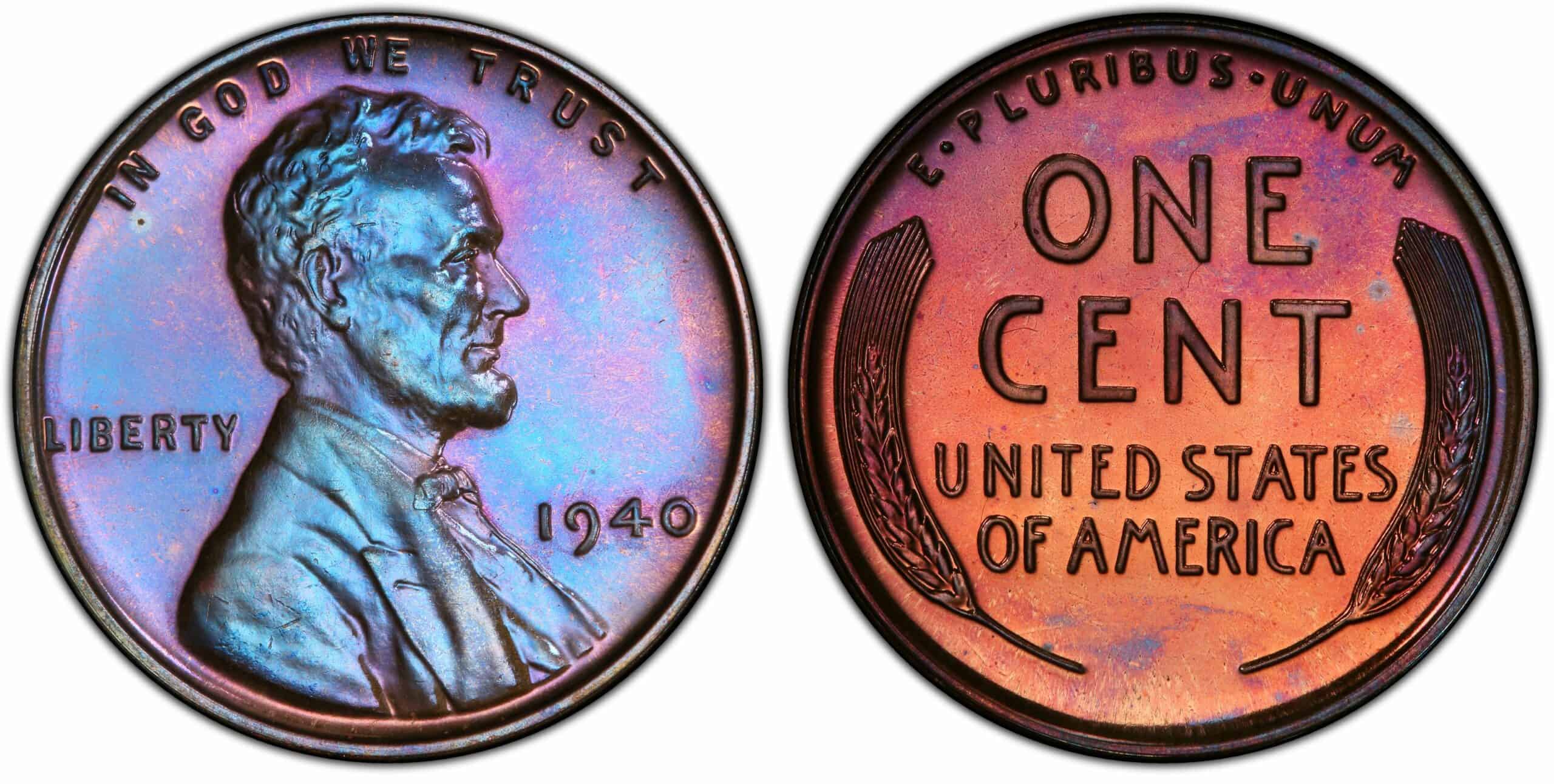 Besides regular strikes, the Philadelphia mint produced 15,872 proof Lincoln wheat pennies in 1940. The mintage was higher than the pre-war mintage but far lower than the post-war mintage.

These coins typically cost $25 to $300 since their price primarily depends on the color. The most desirable are red pieces in the highest grade that can reach about $4,500 at auctions.

However, one unique proof minted this year won the record at Heritage Auctions in 2017. One collector paid an impressive $11,163 for this lovely coin with fantastic red toning. 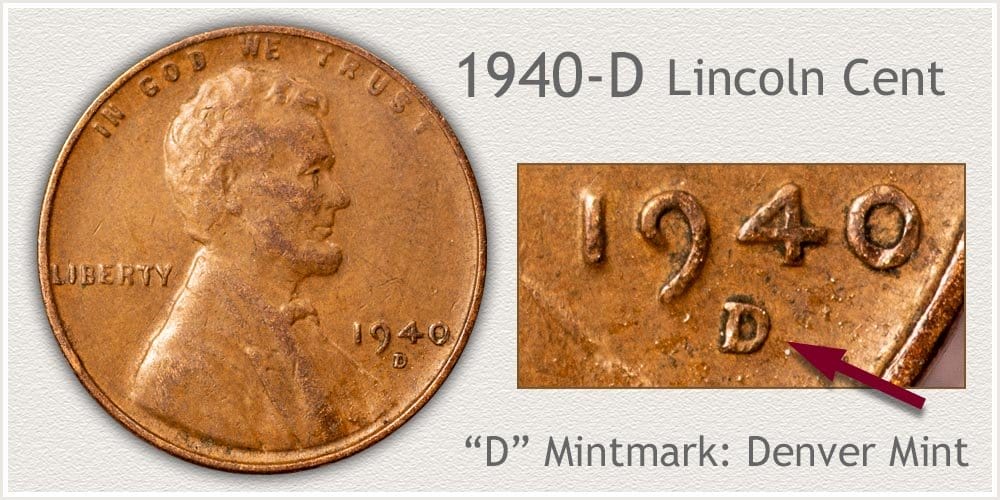 The Denver mint produced 81,390,000 Lincoln wheat pennies with the D mint mark in 1940. They are typically inexpensive on the coin market, and you can buy one in the mint state for $2 to $35, depending on its color.

Even the most beautiful red pieces in an MS 67 grade costs about $100 to $120. Interestingly, even the auction record is pretty modest compared with coins struck in other mints that year. The most expensive Lincoln wheat penny produced in Denver in 1940 was paid $3,120 in 2018. 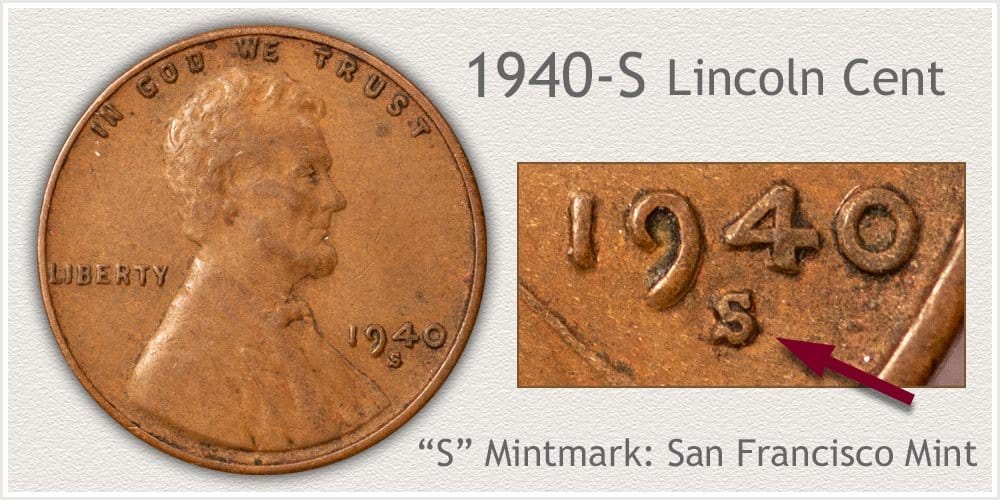 The San Francisco mint had a high mintage of 112,940,000 Lincoln wheat pennies in 1940. Depending on condition and color, these coins with the S mint mark on the obverse are worth approximately $2 to $35.

Collectors particularly appreciate red pieces, so their price is about $130 to $155 on the market. One collector paid $9,600 at Stack’s Bowers auction for one such coin in an MS 68 grade.

Technically, you can find errors on any Lincoln penny regardless of the minting year. However, pieces minted in 1940 have no significant imperfections, particular key dates, and desired varieties.

If you pay close attention to your coin, it is possible to find something odd or atypical, like the crooked lettering, because of the die alignment. The most common errors include the following:

This standard error occurs when the die clips the coin edge before its ejecting from the place. In most cases, you can expect to get $15 to $60 for this error piece.

Die cracks were common among pennies minted this first war year because of die failures. Once cracks appeared on the die surface, it transferred them to the planchets.

Struck on silver and copper planchet

This weird error sometimes appeared on 1940 pennies due to the dies that transferred the silver and copper alloy in a 12%: 88% ratio on the coin surface. Since the US Mint didn’t use this metal mixture to create coins, the error is a mystery. However, a few such pieces were sold for $400.

These common and inexpensive errors include slight D or S mint mark doubling.

This error strike resulted from the unproperly seated planchet when the die struck it. The price depends on the off-center percent.

Lamination error typically occurs due to the outer coin coat damaging during the process of minting.

FAQ about the 1940 Lincoln Wheat Penny

Unfortunately, Lincoln pennies produced in 1940 are abundant without significant rarities, key dates, and errors. Most pieces are inexpensive and typically uninteresting for serious collectors.

Which 1940 Lincoln wheat penny is worth a lot of money?

How much is the 1940 No Mint mark Lincoln wheat penny worth?

Most Lincoln wheat pennies produced in the Philadelphia mint in 1940 are inexpensive.

What is the most pricey Lincoln wheat penny?

The most expensive Lincoln wheat penny is the bronze piece struck in 1943 in Denver. One collector paid an unbelievable $840,000 for this brown war coin in an MS 64 grade at Heritage Auctions in 2021.