Jefferson nickels are 5-cent coins first minted in 1938 to replace existing Buffalo nickels. They got their name after former American President Thomas Jefferson’s bust on the coin obverse.

The 1940 Jefferson nickel value depends on the mint mark, grade, and condition. Plus, some varieties and errors often significantly increase this coin type’s price.

History of the 1940 Jefferson Nickel

In 1938, the conditions for the Buffalo nickel replacement appeared since the mandatory 25 years of minting had passed. The then-American President Franklin Roosevelt was a great admirer of Thomas Jefferson, so he initiated the production of coins in his honor.

Until that year, the US Mint’s chief engraver designed coins. However, a competition for the best nickel look was organized this time, and the prize for the winner was $1,000. All leading sculptors received an invitation letter to join the contest, and almost 400 competitors registered their participation.

The prize for the winning design went to the German emigrant sculptor Felix Schlag, who had become an American citizen shortly before that. Four weeks were enough for this artist to design the new nickel obverse based on Jefferson’s portrait by the painter Gilbert Stuart.

The members insisted on a design revision, and the objections were related to the angle of Monticello shown. Also, they didn’t like the modern style of the inscription.

Since the commission expressed its objections, Felix Schlag adapted the design accordingly. He changed letters in the inscriptions and depicted Monticello from the front. After official approval in mid-September 1938, the first nickel with a new appearance was minted.

The nickel appearance hasn’t undergone any excessive changes over the years. However, the situation with the coin composition is entirely different.

During WWII, there was a nickel shortage due to the military industry’s needs, so Congress approved a change in the composition. In that period, these coins contained silver and copper instead of nickel.

Features of the 1940 Jefferson Nickel

The 1940 Jefferson nickel was in circulation for over 80 years, and many specimens are pretty worn nowadays. To be sure that the piece you have is indeed the 1940 nickel, it is desirable to know how it should look.

The obverse of the 1940 Jefferson nickel 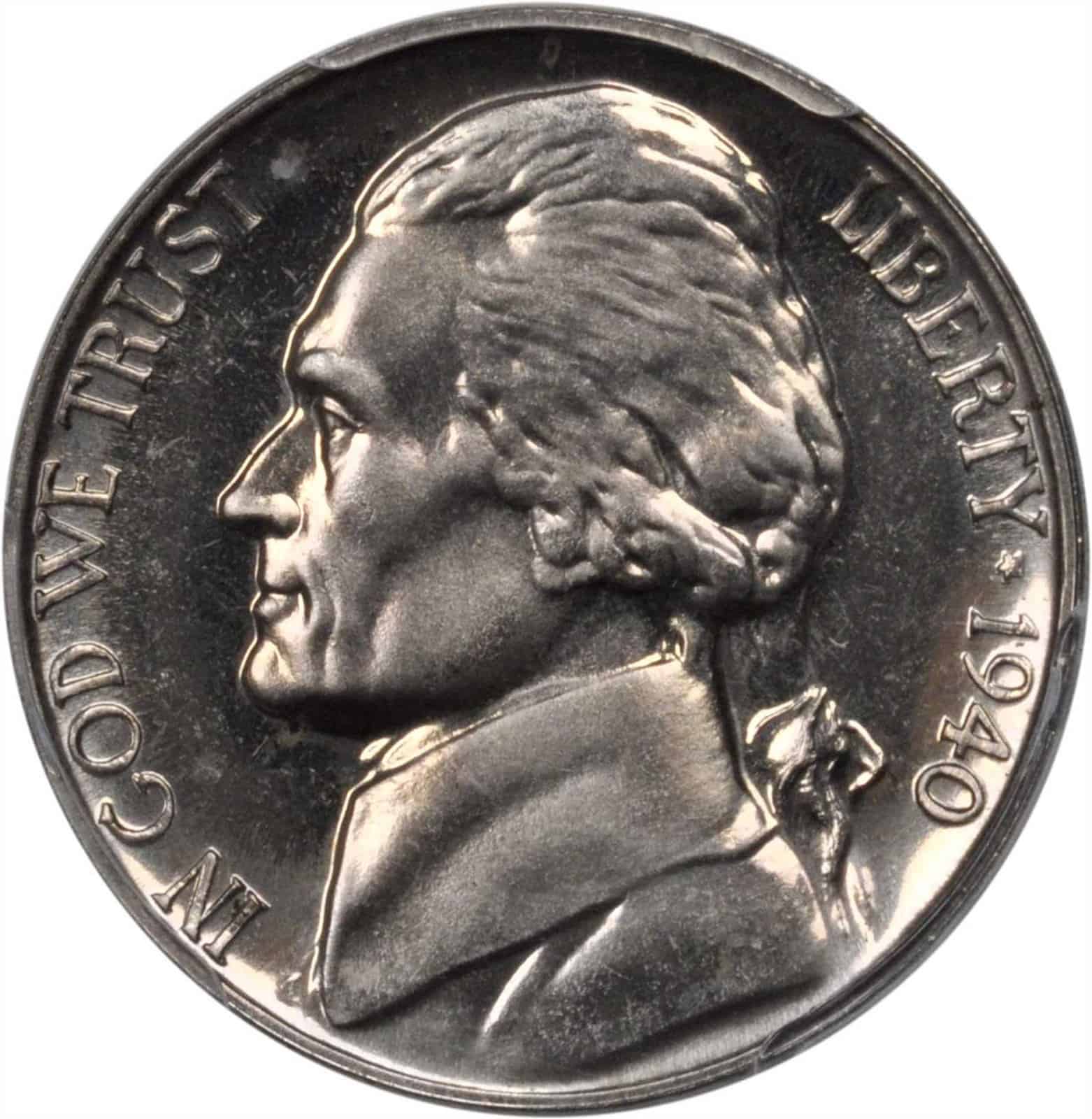 You can notice that Jefferson wears long hair tied in a ponytail, a typical hairstyle for that period. His coat details are clearly expressed, with a high collar according to that time’s fashion.

You can see the phrase IN GOD WE TRUST on the coin’s left rim in front of the profile. On the right side is the word LIBERTY with the minting year and a small five-pointed star between them.

The reverse of the 1940 Jefferson nickel 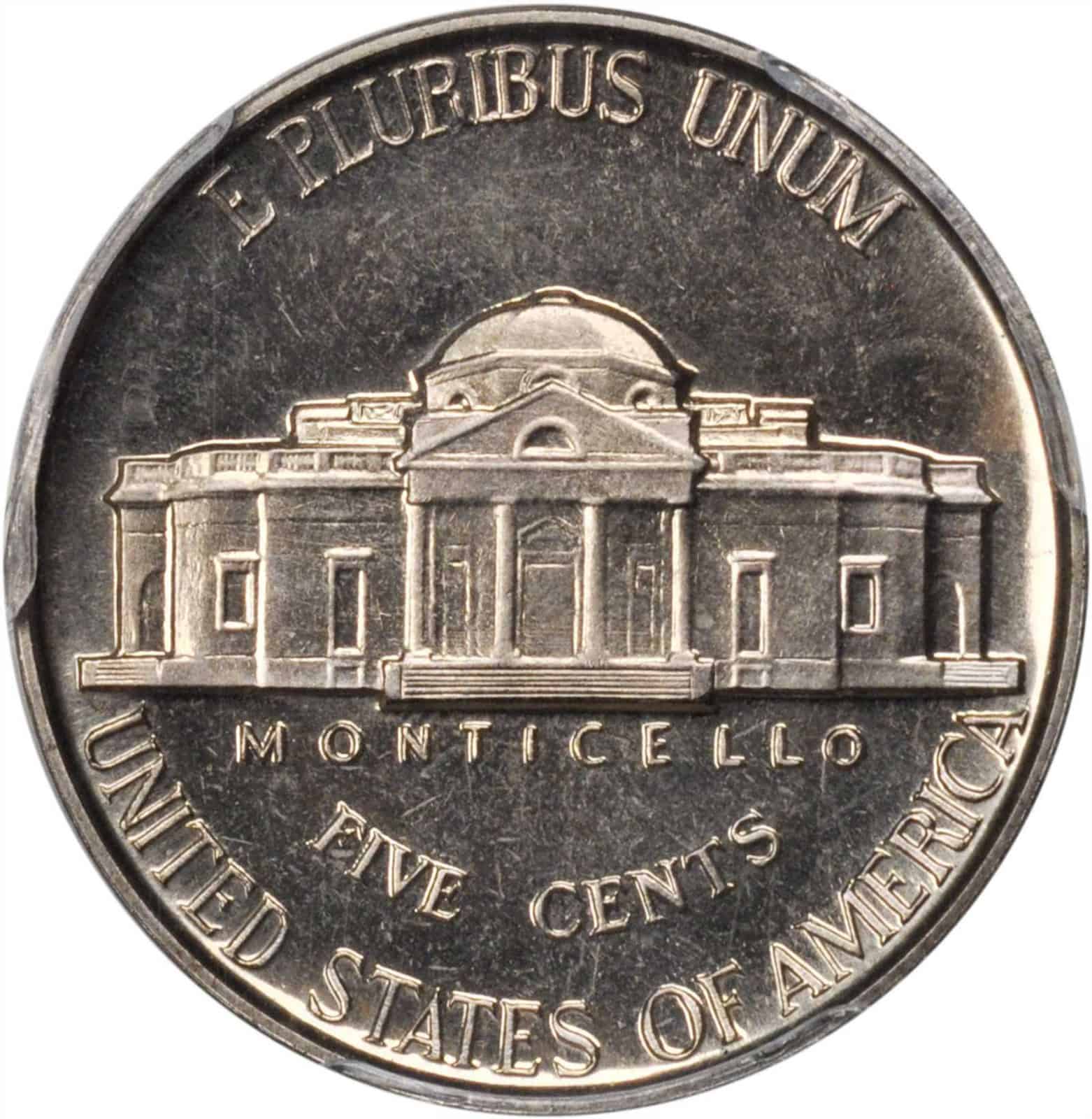 On the reverse is the front view of Jefferson’s mansion Monticello built by his own idea. It was well-known that he found inspiration in the Italian Renaissance, and even the name Monticello came from the Italian term meaning Small Mountain.

The monumental building occupies the reverse central part, with details such as the octagonal dome and steps to the porch. Above this dome on the upper rim is the Latin saying E PLURIBUS UNUM.

The inscription UNITED STATES OF AMERICA is along the lower rim, with the FIVE CENTS denomination above. Directly below the stairs, you can see the house name, MONTICELLO.

Other features of the 1940 Jefferson nickel

The US Mint minted 259,743,316 Jefferson nickels the first war year at three mints. Like other coins minted from 1938 to 1942, these specimens belong to the first era. Since they are over eighty years old, they are collectible nowadays. 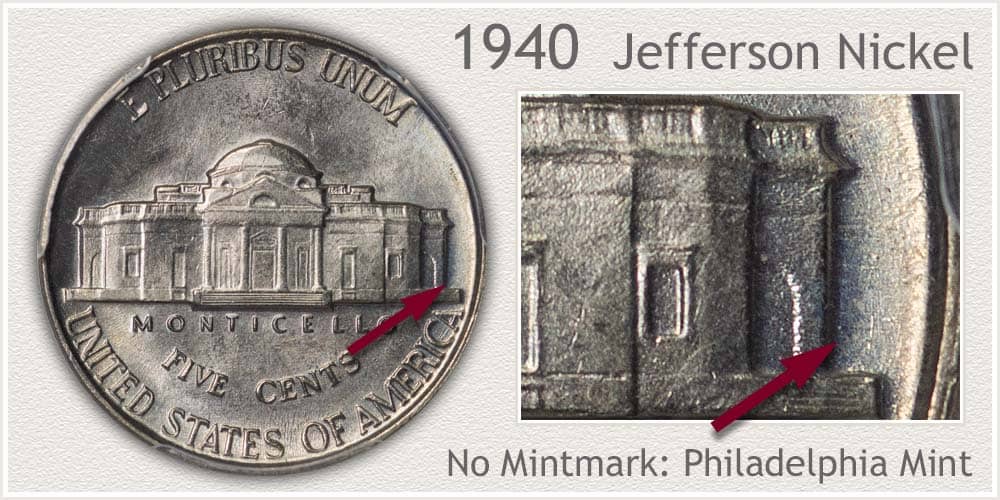 The Philadelphia mint produced over 176 million Jefferson nickels in 1940, so it is not difficult to find them on the current coin market. However, their value can significantly vary, depending on preservation level and whether they bear the Full Steps marks.

The average value for a fine-graded specimen is 10 cents, while an uncirculated piece with an MS 65 rating can reach $11. Still, some coins appearing at auctions can be surprisingly costly. For instance, the 1940 Jefferson nickel graded MS 68 was sold at Legend Rare Coin Auctions in 2021 for $558.

The Philadelphia mint struck only 14,158 proof Jefferson nickels in 1940, and this small number affected their value on the coin market. You can buy a proof coin in average condition for as little as $18, but high-preserved pieces can be pricey and cost up to $8,000. 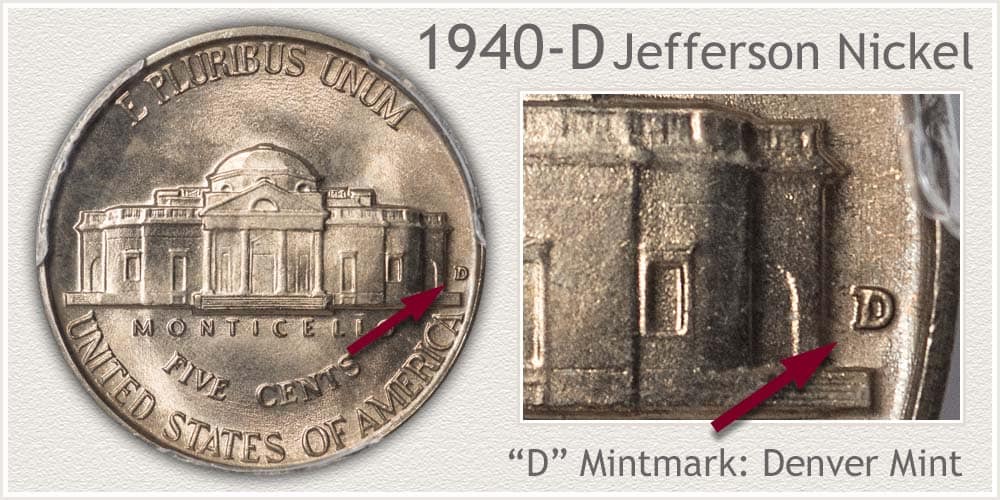 The Denver mint produced just over 43,500,000 Jefferson nickels this year. You can distinguish these pieces from others by the D mark on the reverse, placed to the right of Monticello.

Their value varies, so you should set aside 11 to 25 cents for a coin in average condition. However, an uncirculated specimen typically costs $2 to $17.

Some pieces can reach significant sums at auctions. At Heritage Auctions 2018, one collector purchased the 1940 D Jefferson nickel with the MS 67 rating for $795. 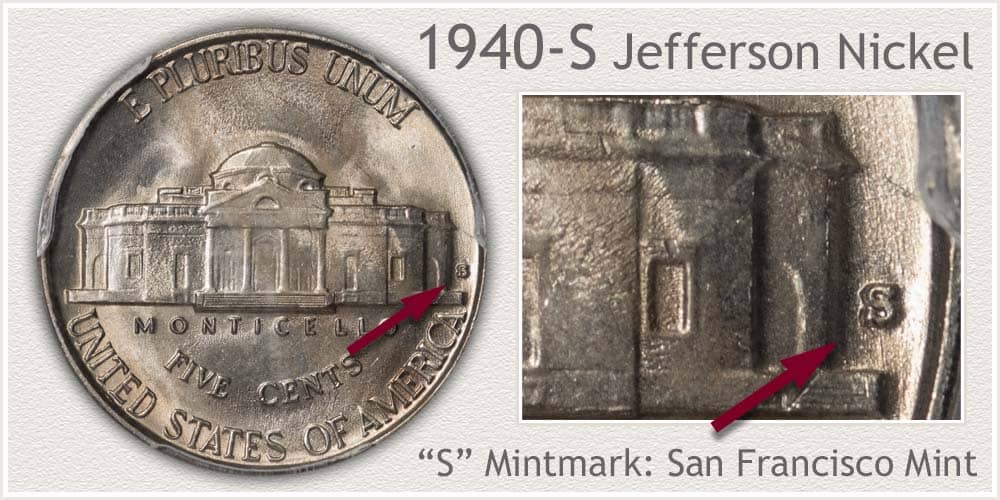 In 1940, the San Francisco mint produced 39,690,000 Jefferson nickels, the lowest mintage of that year. The quickest way to check whether the particular coin comes from this mint is to find the letter S on the reverse.

Nowadays, most of these nickels are in a worn state, which significantly affects their value. Circulating specimens’ prices range from 11 to 50 cents, while you need to set aside about $17 for an uncirculated coin.

The 1940 S Jefferson nickel in average condition won the auction record in 2000 at Heritage Auctions. One collector bought it for $1,840.

The average 1940 Jefferson nickel typically comes with a low price except for highly graded pieces. On the other hand, Full Steps varieties and some errors are always more expensive.

The Full Steps is the designation used for nickels with five or six clearly visible steps at the base of Monticello. Due to their rarity, these pieces have exceptional value when they are in preserved condition. 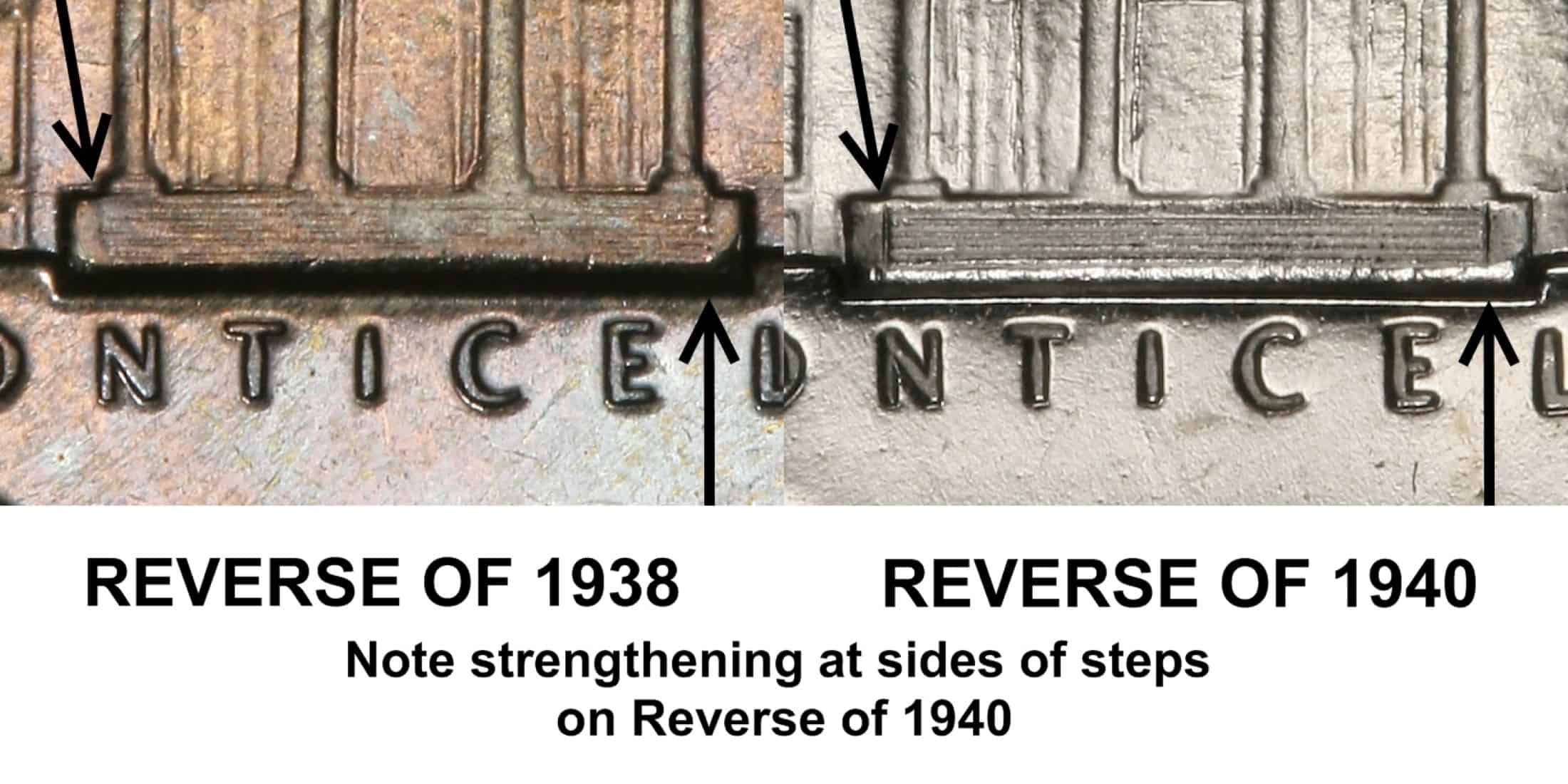 Interestingly, you can find nickel proofs struck in 1940 with two different reverses. The Philadelphia mint used the old 1938 die while minting a part of the overall mintage.

They are recognizable for the softer details on the reverse. Collectors like these nickels, and they can fetch staggering sums at auction. For instance, one 1940 proof Jefferson nickel with the reverse 1938 won an auction record in 2011. It was sold for a surprisingly high $28,750 at Heritage Auctions.

Sometimes, an old and frequently used matrix cracks near the rim, resulting in a coin flaw known as cuds. The 1940 Jefferson nickel with this error is worth $50 to $100. On the other hand, the appearance of cracks or raised anomalies on the coin surface also increases their value. You can get $10 to $50 for such a specimen. 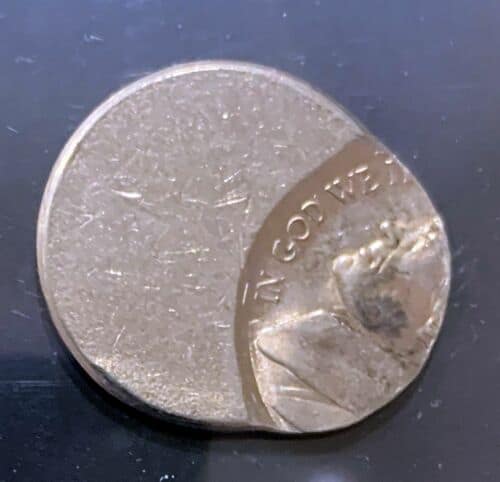 An off-center bump appearing on the nickel surface is the result of an incorrectly centered die. How far the punch is from the center determines the value of this coin error. The 1940 Jefferson nickel with a 5% to 10% off-set strike can fetch you $10 to $20, while a 50% off-center strike increases its value to $100.

FAQ about the 1940 Jefferson Nickel

What makes a 1940 Jefferson nickel rare?

The most collectible 1940 Jefferson nickels are rare Full Steps coins. According to PCGS and NGC, only coins with five or six steps can be in this category.

Which 1940 Jefferson nickel is worth a lot of money?

What is the 1940 No Mint mark Jefferson nickel average price?

The value of nickels produced in Philadelphia primarily depends on their preservation level. Due to the large number of used coins, you can find them for as little as seven cents.

However, their typical price ranges from 11 to 17 cents, while you can buy a piece in a better condition for approximately 35 cents. In most cases, proof coins have a higher value, so you need to spend at least $140 to buy one.

What is the rarest 1940 Jefferson nickel?

According to PCSG data, the rarest is the 1940 S/S Jefferson nickel in the MS 66 grade because only 13 of these coins still exist. Collectors know that there is one copy with MS 66+, but it is not available for public sale.