The Mercury dime, more properly known as the Winged Liberty Head dime, was produced from 1916 to 1945 and is considered one of the most beautiful of all US coins.

The 1940 version was produced with no mintmark as well as with S and D mintmarks. Most of these coins are not of particularly high value, although they are still extremely popular among collectors.

In this post, we’ll go into detail about the history and value of this coin – so to find out more, just keep on reading!

The dime that was minted from 1916 to 1945 is commonly known as the Mercury dime due to the image on the obverse side that appears to show the Roman messenger god of the same name.

However, the image is not intended to represent Mercury but rather is a depiction of the goddess Liberty. For this reason, the coin is more correctly referred to as the Winged Liberty Head dime.

The dime that came directly before this coin was the Barber dime, which was minted from 1892 to 1916. It was designed by the Mint Chief Engraver, Charles E. Barber, hence its name.

From the beginning of the 20th century, amid a growing desire for more attractive, modern coinage, pressure began to build to replace the Barber dime, which had been unpopular ever since its release.

According to the rules of the United States Mint, coins can only be replaced after 25 years, and for the Barber dime, this time limit expired in 1916.

As a result, in 1915, Barber, who was still in office, was requested to prepare new designs for the dime as well as for the silver half-dollar and the quarter.

Barber submitted his designs, but they were rejected by the Commission of Fine Arts. Instead, three sculptors, Adolph Weinman, Hermon MacNeil and Albin Polasek were invited to submit sketches, and those presented by Weinman were selected for the dime.

The first batch of Winged Liberty dimes was minted at the Philadelphia mint, but when test runs were sent out to vending machine and pay phone companies, it was found that they didn’t work.

This was found to be due to the rim of the coin being too high, something known as a fin. This issue was subsequently corrected, and the new version went into production on October 6, 1916, entering into circulation on the 30th of the same month.

The original faulty coins were recalled and melted down, and only a single example is known still to exist.

However, normal production resumed in 1934 and continued until the Winged Liberty dime was superseded by the Franklin D. Roosevelt dime in 1946.

For this reason, the 1940 version is not considered special or particularly rare, although it is still eagerly sought after by collectors. 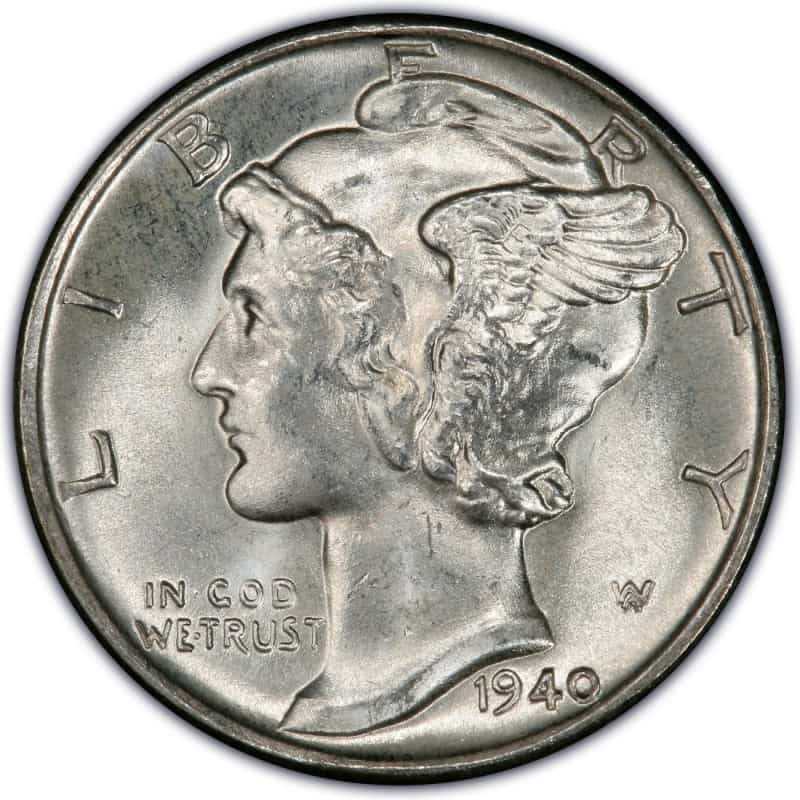 The obverse side of the 1940 dime depicts the goddess Liberty facing left and wearing a winged pileus or Phrygian cap, a type of conical headwear also known as a liberty cap.

Weinman’s monogram can be found embossed halfway between the date and the “Y” of “LIBERTY”.

It is not known who served as Weinman’s model for the image of Liberty, but it is widely believed that it was Elsie Stevens, the wife of his neighbor Wallace Stevens.

According to one story, his model was instructed to wear a stocking on her head to imitate the pileus while she was sitting for Weinman.

As soon as the coin was released, people immediately began referring to it as the “Mercury dime” due to Liberty being mistaken for the Roman messenger god Mercury.

This was partly due to the winged hat traditionally worn by Mercury in many depictions and may also have been aided by the prominent chin of the image on the coin, leading many to mistake the goddess for a male.

This nickname stuck, and the coin is commonly referred to in this way, even today.

Weinman later wrote that the winged cap was intended to represent the idea of “liberty of thought”. 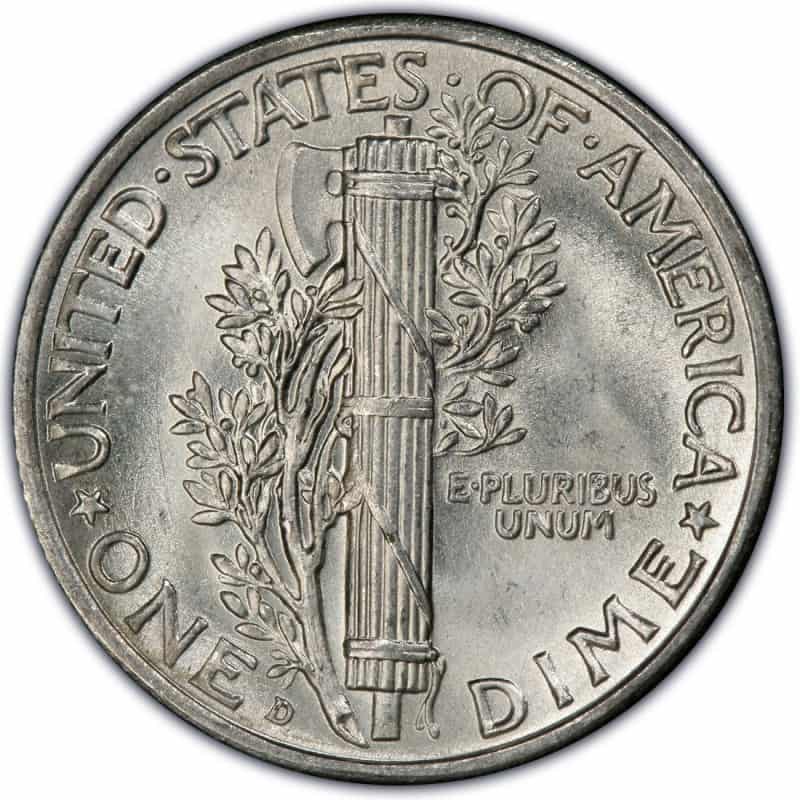 On the reverse side of the 1940 Winged Liberty dime is depicted a fasces, a bundle of wooden sticks that was an ancient Roman symbol of the power of a magistrate.

As was also common in Roman times, the fasces depicted on the 1940 dime also contains an axe, an element that reinforces the idea of strength and power.

At the same time, the fasces on the coin is surrounded by an olive branch, a well-known symbol of peace.

This juxtaposition of symbolic elements could be taken to represent a commitment to peace backed up by a willingness to use wield strength when necessary, a reminder that a desire for peace shouldn’t be mistaken for weakness.

To the right of the fasces and olive branch can be seen the Latin expression “E PLURIBUS UNUM”. This can be translated as “out of many, one” and is one of the traditional mottos of the United States.

The mintmark, when present, is located on the reverse side, just to the right of the “E” in “DIME” and below the olive branch.

If you want to see what it looks like, here’s a short video that shows you the features on the two sides of the coin.

Around three times more dimes were struck in Philadelphia than in either Denver or San Francisco, so Philadelphia 1940 dimes are the most common and least valuable of the three.

Slightly fewer coins were struck at Denver than at San Francisco, making them the least common of the three and possibly the most valuable.

Other than that, the amount of wear will also affect the value of a coin. If a coin was in circulation, it will probably be highly worn and be worth less. However, uncirculated coins with no wear, nicks or blemishes will be valued more highly.

Specifications of the 1940 dime

Value of a Philadelphia no mintmark 1940 dime 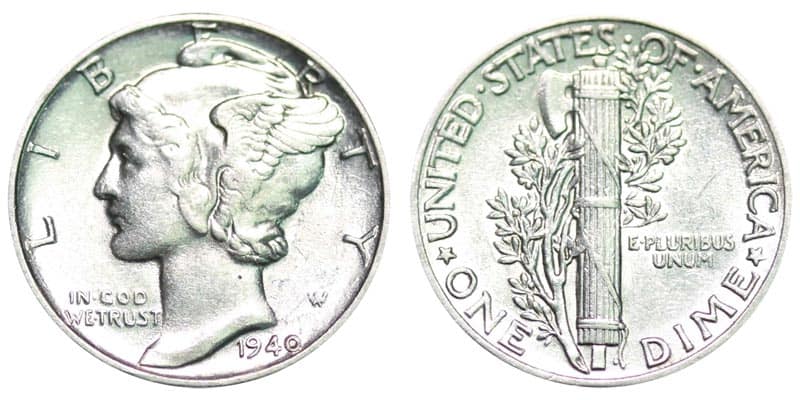 A Philadelphia dime (one with no mintmark) in good condition and showing light regular wear and minor blemishes can fetch around $2.

In fine condition, with little wear and with all the diagonal bands visible, it can fetch around $3.

For coins with strong luster and almost no marks or blemishes, prices can reach as high as $30. 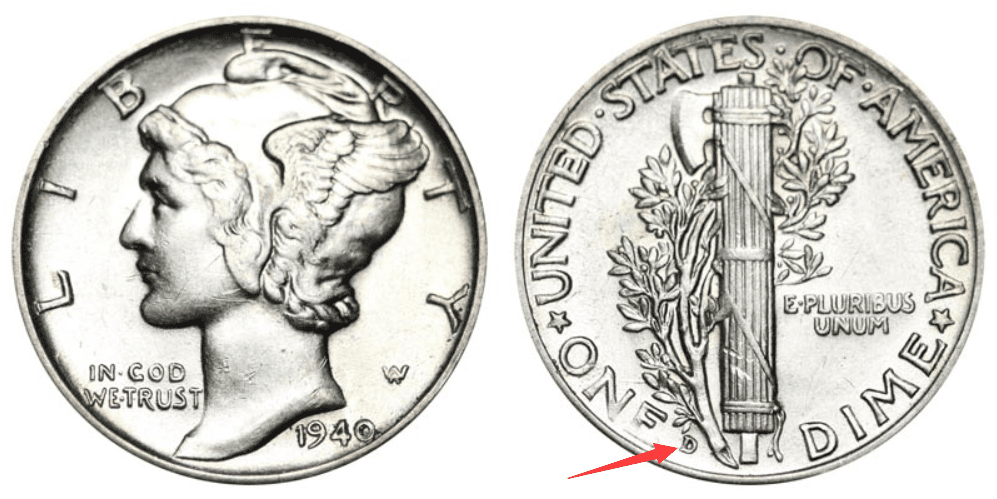 A Denver dime (one with a “D” mintmark) in good condition and showing light regular wear and minor blemishes can fetch $2.

In fine condition, with little wear and with all the diagonal bands visible, it can fetch $3.

For coins with strong luster and almost no marks or blemishes, prices can reach as high as $35. 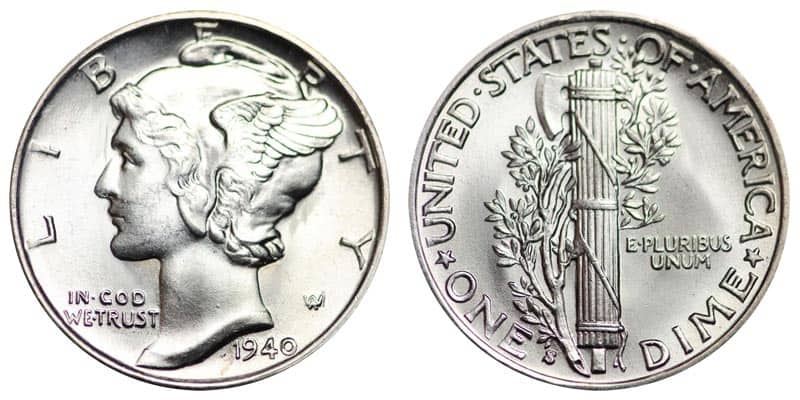 A San Francisco dime (one with an “S” mintmark) in good condition and showing light regular wear and minor blemishes can fetch $2.

In fine condition, with little wear and with all the diagonal bands visible, it can fetch $3.

For coins with strong luster and almost no marks or blemishes, prices can reach as high as $35 or more.

The face value of a 1940 dime is $0.10, but they are now considered collector’s items and will fetch more than this at auction.

How much you can sell a 1940 dime for depends on several factors.

First, you need to know which mint a dime was struck at.

Over 65 million were struck at Philadelphia, so those are the most common. However, only around a third of that amount was struck at both Denver and San Francisco, making those coins rarer and more valuable.

Second, you need to check the condition of the dime. Those showing heavy signs of circulation are the least valuable, those with lighter wear and damage are more valuable and uncirculated coins are the most valuable of all.

Depending on the combination of these factors, a 1940s dime can be sold for between $2 and $35.

Depending on where it was struck and its condition, a 1940s dime can be worth between $2 and $35. Its face value is ten cents and its silver bullion value is approximately $1.30.

The reverse of the 1940 dime depicts the goddess Liberty wearing a pileus, a type of hat also known as a liberty cap.

She is commonly mistaken for the Roman god Mercury, who is also often depicted wearing a winged helmet. This is why this coin is often – yet erroneously – referred to as the Mercury dime.

The obverse depicts a fasces, a Roman symbol of a magistrate’s power, surrounded by an olive branch, a common symbol of peace.

Who is the person on the obverse of the 1940 dime?

The person depicted on the 1940 dime is the goddess Liberty and not, as many people have believed, the Roman god Mercury.

If you have a 1940 dime, it is still legal tender, and you can still use it to buy things.

A beautiful coin eagerly sought after by collectors

The Winged Liberty dime is widely regarded as being one of the most beautiful US coins ever minted, and as such, it is widely sought after by collectors.

It is not a particularly rare coin, but if you have one in uncirculated condition, it may be worth up to $35 or more if you wish to sell it.