The US Mint produced four nickel series, including the longest-minting Jefferson nickels, from 1938 to the present. The 1939 nickel value depends on its condition and the mint mark.

This nickel generally belongs to valuable coins from the early era, making it desirable among collectors. Since coins produced in less than 10 million pieces are considered rare, those from San Francisco and Denver are considered pricey. Let’s take a look.

History of the 1939 Jefferson Nickel

The 1939 Jefferson nickel belongs to the nickel series that also includes:

The US Mint has struck Jefferson nickels from 1938 to these days, making them the longest-minting series in a group. However, the most collectible and valuable are coins produced in an early era, from 1938 to the 1960s.

Their design commemorates one of the Founding Fathers and the 3rd American President. By the way, it was the third circulating coin with a real person on the obverse instead of a symbolic figure, like an American Indian or Lady Liberty.

Three mints produced 130,771,535 Jefferson nickels in 1939, but most coins from regular strikes and proofs were minted in Philadelphia. The Denver mint had the lowest mintage, making survived coins the most valuable.

The obverse of the 1939 Jefferson nickel 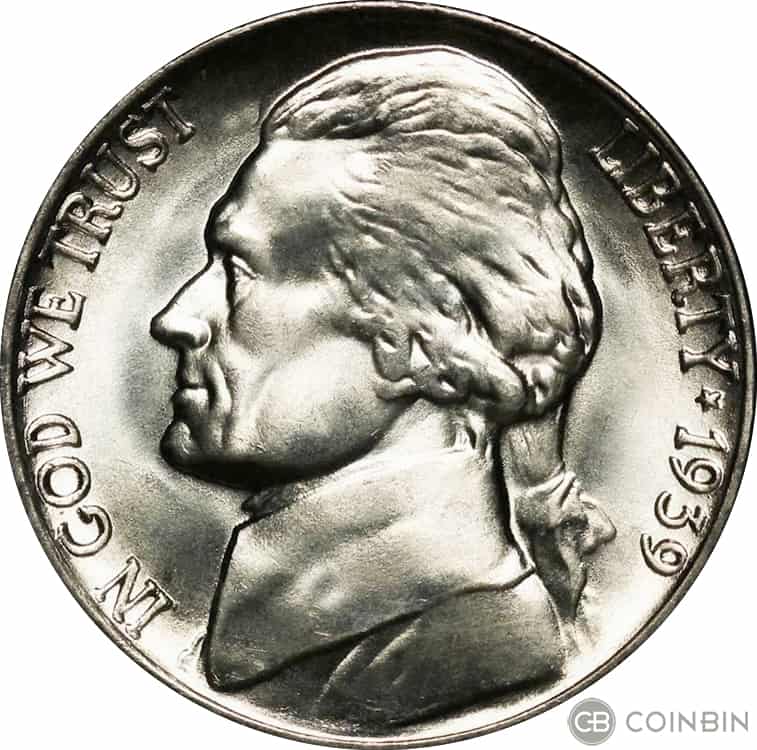 Sculptor Felix Oscar Schlag created a simple but effective Jefferson nickel obverse with the 3rd US President in the center. His left-facing bust, made after Jean-Antoine Houdon’s sculpture from 1789, takes up most of the space.

You can see words IN GOD WE TRUST on the left, while the LIBERTY and the DATE are positioned behind Jefferson’s back.

The reverse of the 1939 Jefferson nickel 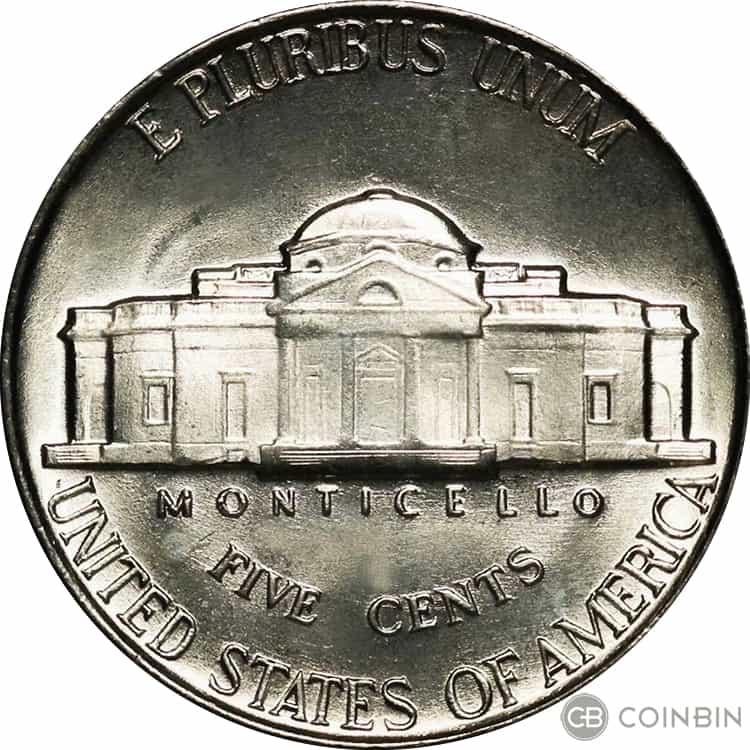 The elegant reverse features include a front view of Jefferson’s mansion, Monticello, and its name positioned below. The UNITED STATES OF AMERICA is struck along the bottom rim, with the FIVE CENT denomination above.

The motto E PLURIBUS UNUM covers the entire composition from the top coin rim, completing the balanced design. Since Schlag’s initials appeared on this nickel in 1966 for the first time, you can’t find them on early coins.

Other features of the 1939 Jefferson nickel

The US Mint produced 1939 Jefferson nickels with two reverse-design varieties:

The first design depicted Monticello with weak and curved step details, and the new solution should have improved the design.

The first variation was rare because these coins were produced for a short period. On the other hand, pieces with a straighter set of steps and sharper details were abundant on the market. 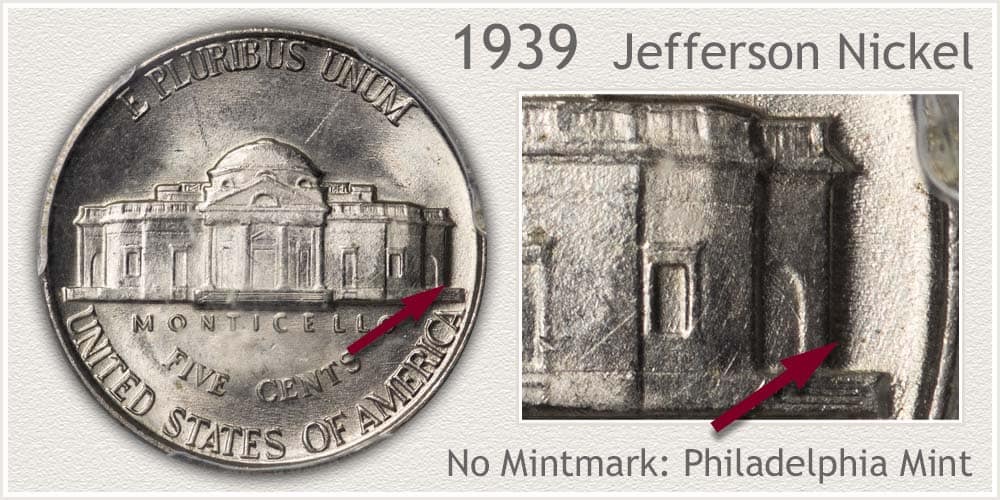 The Philadelphia mint produced 120,615,000 Jefferson nickels in 1939, achieving the highest mintage that year. The price of both varieties with the 1938 and 1940 reverse is similar, and you can buy these coins for $0.50 to $140. In most cases, their value depends on their preservation level. 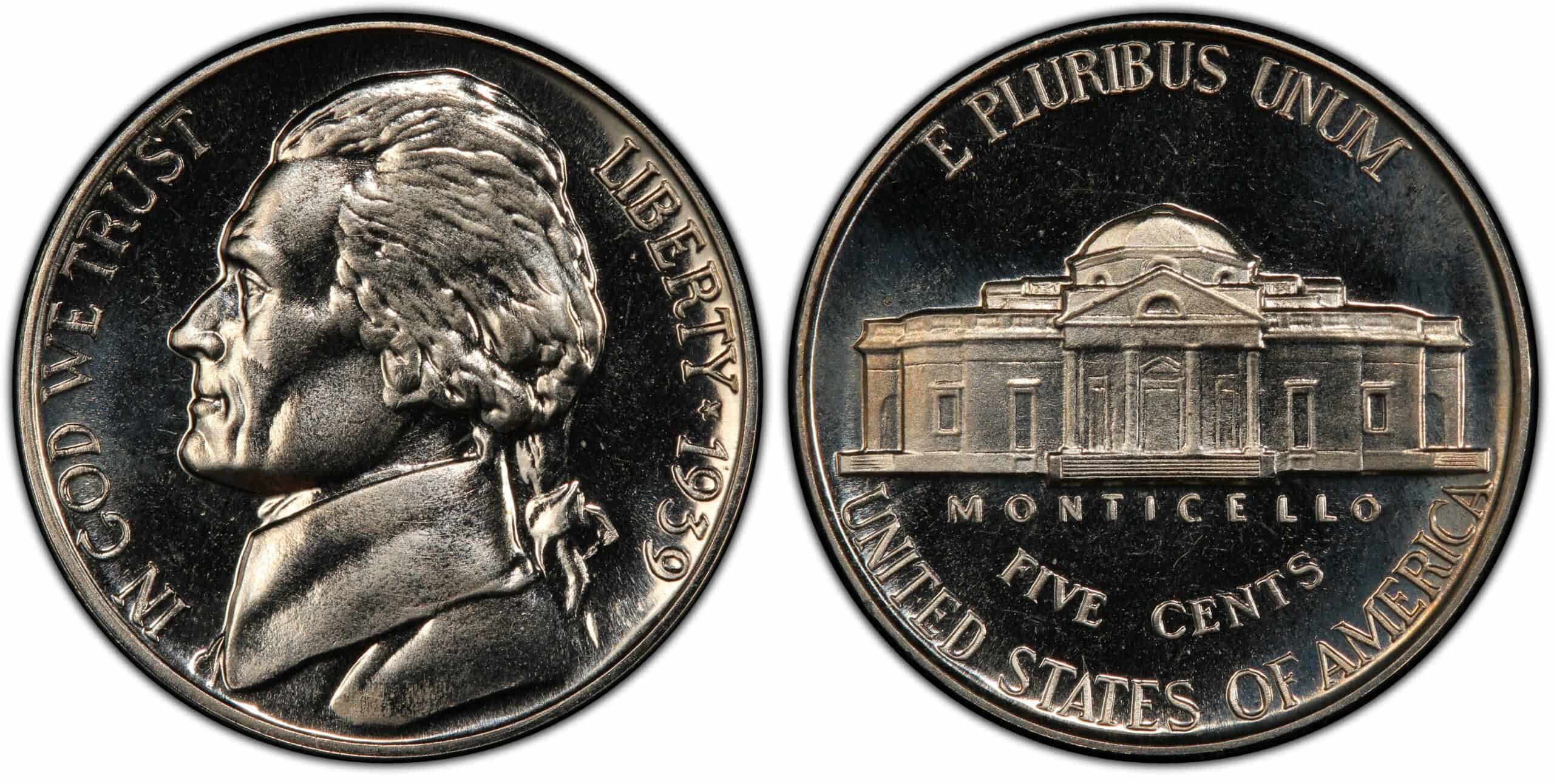 Besides regular strikes, the Philadelphia mint produced 12,535 proof nickels in 1939. Their value depends on the reverse, so that you can purchase 1939 reverse 1938 coins for $20 to $5,000. On the other hand, 1939 reverse 1940 pieces have significantly higher prices, particularly high-ranking ones. 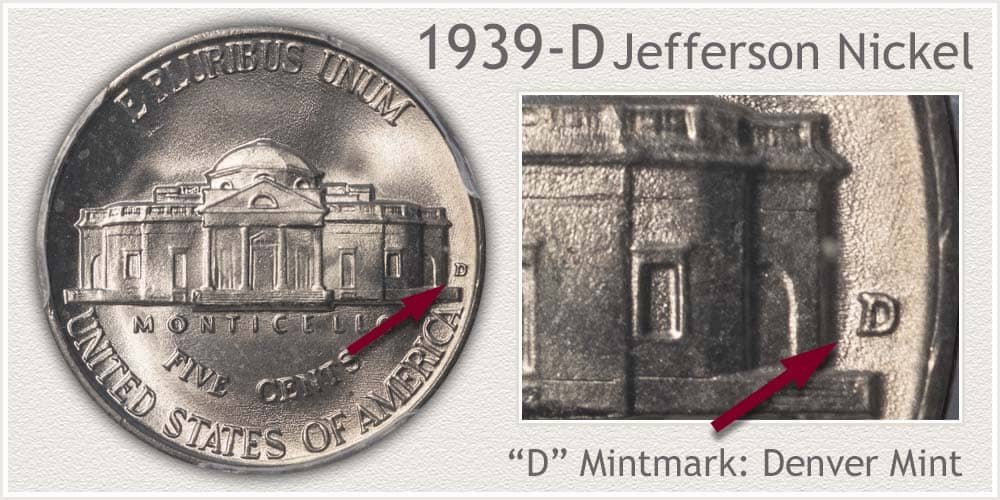 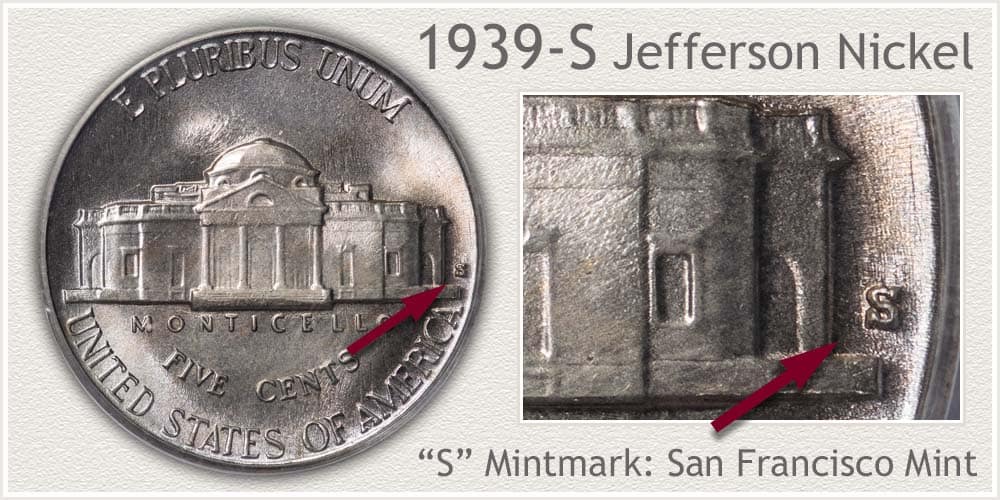 The San Francisco mint produced 6,630,000 Jefferson nickels this year. In most cases, you should set aside up to $5 for circulated pieces. On the other hand, those in the mint state cost $20 to $750, depending on the reverse type.

You can recognize one 1939 Jefferson nickel variation and one well-known error. Both coin types are relatively rare, highly collectible, and typically expensive.

Jefferson nickels were not particularly interesting to collectors before the 1970s when Full Steps pieces became popular and sought after. These coins showed five or six steps in front of the Monticello building.

You can determine these nickels by counting the lines between the steps. If the coin has the complete first four lines, it is a piece with five Full Steps. If there are five clearly visible and uninterrupted lines, you look at a six Full Steps nickel.

Interestingly, Full Steps increases nickels’ value by ten or even twenty times compared to their regular price. Therefore, you should set aside hundreds, sometimes thousands, of dollars to get one. Additionally, rare error Full Steps nickels always bring an additional premium.

Only three years in the Jefferson nickel series have Doubled Dies, including 1939 DDR, 1943 DDO, and 1945 DDR. This error resulted from double striking a particular coin on the die, causing the double inscription or image on its surface.

The 1939 Jefferson nickels produced in Philadelphia have a better visible doubling than the other two, notable on the Monticello Dome and the denomination. Collectors estimate that only about 1,000 to 1,500 such nickels still exist.

Most 1939 DDO Jefferson nickels are low quality, making well-preserved pieces pricey. Depending on their ranking, you can buy one of these coins for $125 to $3,000. However, those in the highest grades with Full Steps typically cost $1,200 to $7,800.

FAQ about the 1939 Jefferson Nickel

What makes a 1939 Jefferson nickel rare?

Which 1939 Jefferson nickel is worth a lot of money?

What is the 1939 No Mint mark Jefferson nickel price?

What is the most pricey Jefferson nickel?

The 1964 MS 65 SMS Jefferson nickel reached $8,750 at an auction, and it is the rarest in the series because barely 40 pieces still exist.

Still, it is not the most valuable because one collector paid $1,150,000 for the unique and pretty mysterious 1964 Jefferson nickel Mirror Brockage with a Jefferson image on both sides.

I have a 1939 nickel with no mint mark,in great shape,I would like to sell.

@Mark williams, did you ever have any luck selling it? I have one as well an was curious what steps I would have to take to get the best for it?