The 1939 was a Walking Liberty Half Dollar. It’s one of the coins that Mint Director Robert Woolley revamped in 1916 and it stayed in use until 1947. Many still consider it one of the most beautiful American coins, so let’s review and appraise the true 1939 Half Dollar Value.

History of the 1939 Half Dollar 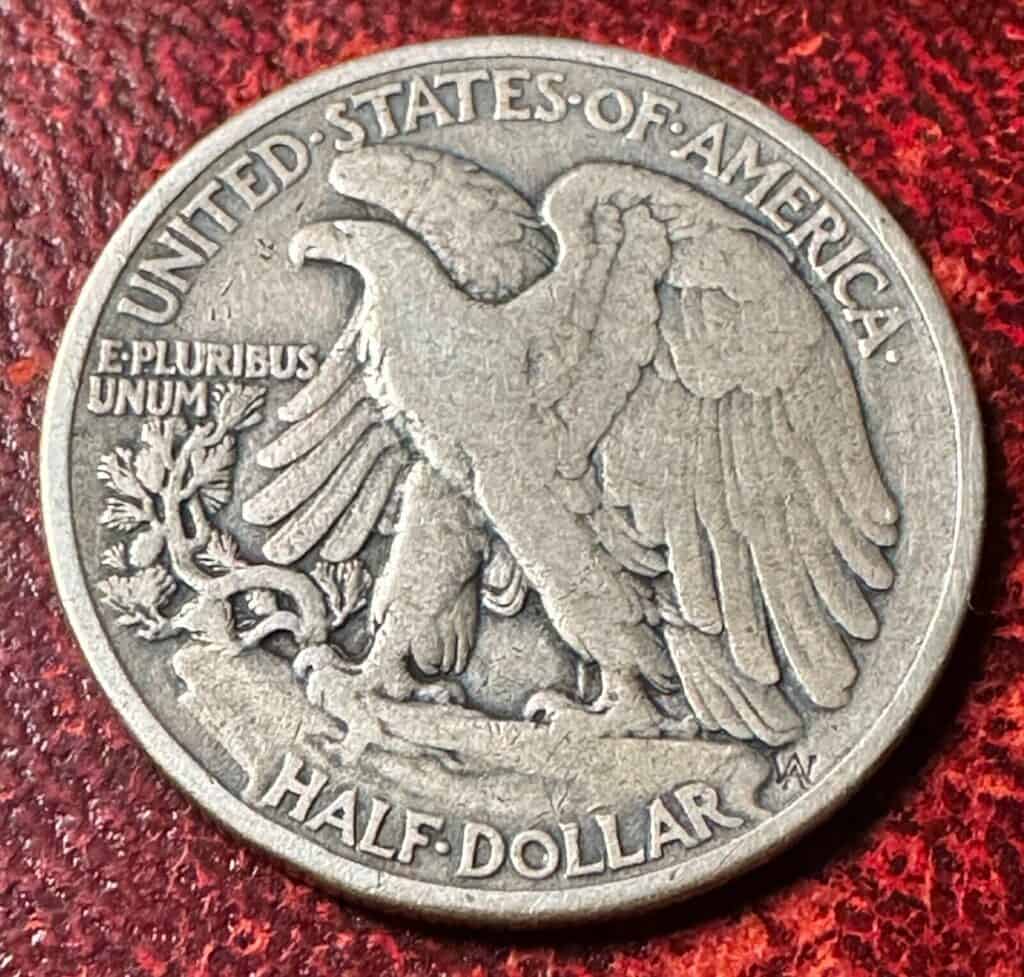 We often blame in-house mint engravers for lacking creativity. But they have certain legal limits. For example, all coins must have United States of America and E Pluribus Unum on the back, with Liberty, and In God We Trust on the front. Quarters, Half Dollars, and $1 coins must have eagles on their tails side and their denomination displayed, but cents don’t.

Coins worth 10c or below can’t have eagles, and earlier coins of 10c or below didn’t have to show their denomination. That changed after the V Nickel debacle. Also, coin designers often get directions on the images they should use. And while low relief seems boring, it extends the lifespans of expensive mint equipment. High-relief coins typically need multiple strikes.

This means dies wear out faster, and many of those decorative details will still fade as coins get passed around in circulation. These issues are typically why in-house mint engravers and external commercial artists clash over coin design. Ordinary folk (and sometimes politicians) prefer pretty coins with lots of aesthetic elements, just like Ancient Greek and Roman coins.

But remember, those coins were engraved by hand, so they could be much more decorative and have intense textural detail. But modern coin presses are automated so they won’t last long if each coin requires five to ten strikes! This means the mint will have to spend more money repairing hubs and dies or even making new ones, and that deeply reduces revenue.

The Redesign of Silver Barber Coinage

You may wonder how rigid the rules above are since many modern coins seem to flout them. But each of those coin changes has to pass through Congress. The only change allowed with no vote is the redesign of coins that have been used for 25 years. This law was passed in the 1890 Coinage Act, and ironically, that’s what facilitated the Barber Coinage in the first place!

All this provides a backstory for the Walking Liberty Half Dollar, which was beautiful, but impractical. Still, it survived 30 years in circulation before it was replaced. Its designer was Adolph Alexander Weinman, and he won the contest against two other sculptors after the Commission of Fine Arts rejected prior sketches by Chief Mint Engraver Charles Barber.

Various delays led to a final batch of Barber Coinage being struck in 1916 as bureaucratic and technical glitches got sorted. Millions were made before the Walking Liberty finally arrived in November. The Silver Barber Coinage (10c, 25c, 50c) was the last set to be replaced after the earlier redesigns of the gold coins ($2.50, $5, $10, $20) and the base metal coins (1c, 5c).

Curiously, Victor David Brenner, the designer of the Lincoln Cent, offered unsolicited ideas for the silver coins in 1914. They told him the mint was preoccupied with other projects. This might be because his Lincoln Penny, while popular and pretty, was already troubling the mint. The Walking Liberty Half Dollar was equally hard on dies but was far better accepted.

Features of the 1939 Half Dollar

Before we talk about the features of the 1939 Half Dollar, let’s review the technical terms.

Now that the jargon feels a little less Greek, let’s look at the coin’s physical characteristics.

The Obverse of the 1939 Half Dollar 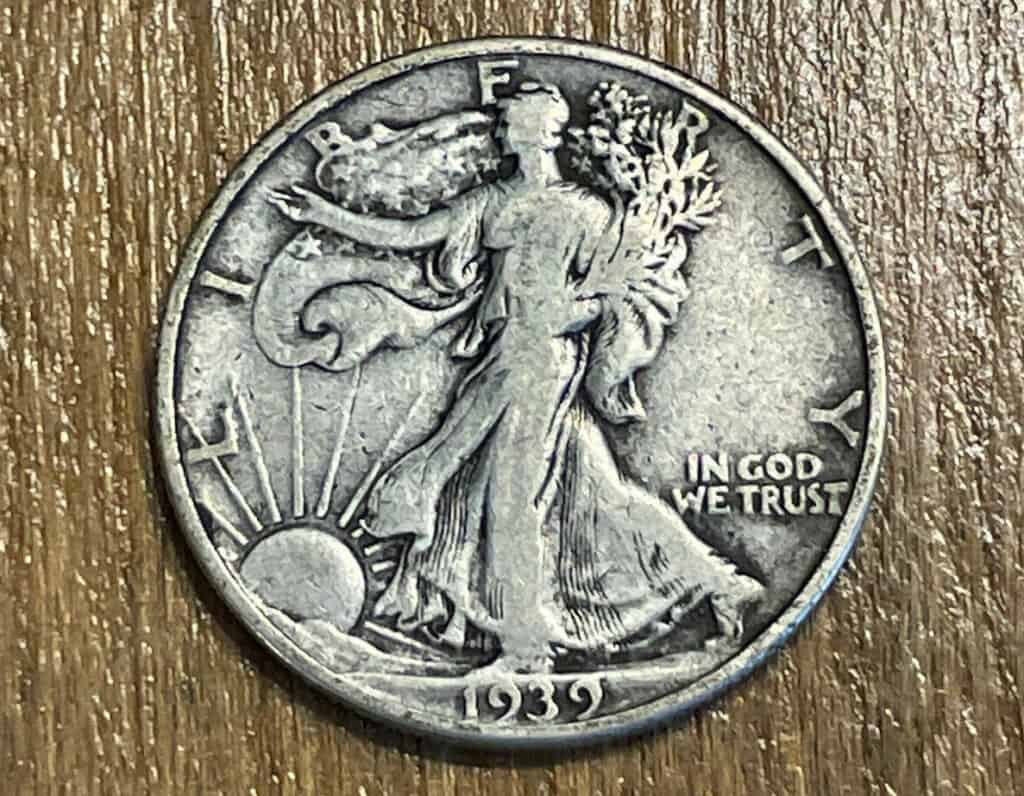 The obverse (heads side) of the 1939 Half Dollar has Lady Liberty walking towards the sun with her arm outstretched. The sun rises out of a mountain on the lower left of the coin as its rays caress the US flag that billows over Lady Liberty’s shoulder. The flag partially hides the legend Liberty, along the top and sides of the coin, curling all around her from the knee up.

The motto In God We Trust sits on the right side of the coin, behind her back leg. Lady Liberty is carrying two branches in her other arm – an oak and a laurel, which represent military might and civil strength. Earlier coins had the mint mark on the front, but on later coins, this moves to the back. The minting date is on the ground beneath Lady Liberty’s feet.

The Reverse of the 1939 Half Dollar 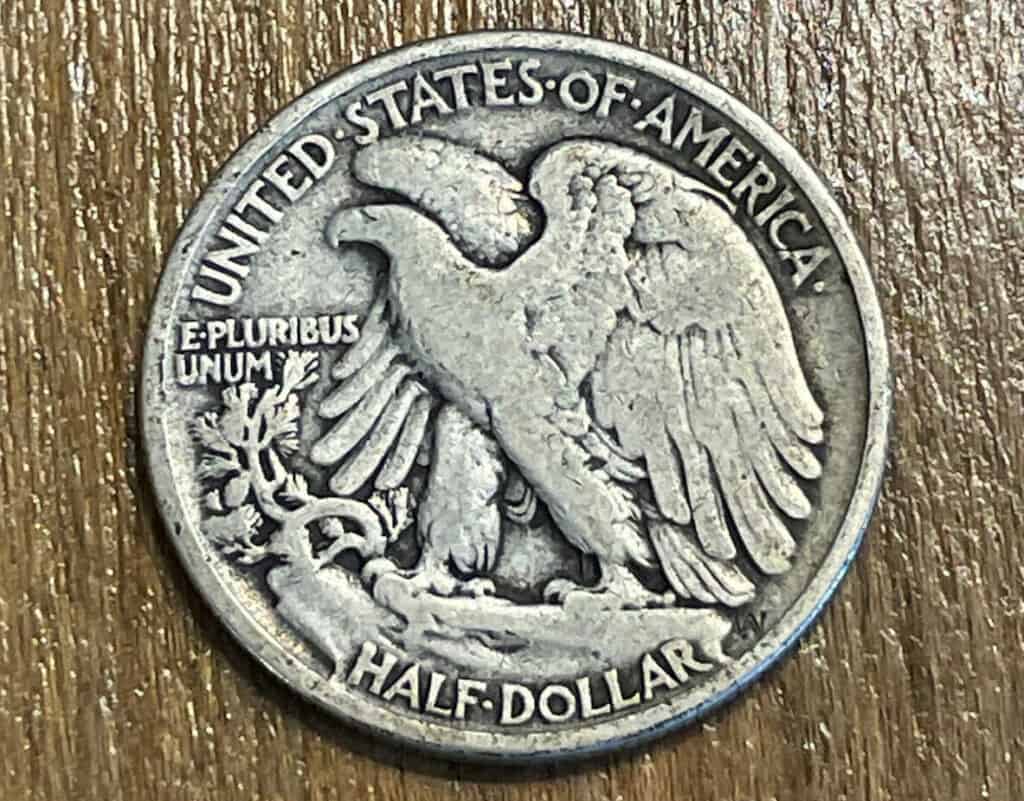 The reverse (tails side) of the 1939 Half Dollar features an eagle about to take flight. It’s on a mountaintop and has a mountain pine branch in its front talon, which is stepping forward. The wings of the bird are starting to spread as it gets ready to fly, and the tops of the wings touch the legend United States of America, which has dots before and after the wording.

Other Features of the 1939 Half Dollar

The 1939 Half Dollar was 90% silver and 10% copper. It measured 30.63mm across and was 1.8mm thick. The coin had a reeded edge and weighed 12.5g. Like the Lincoln Penny before it, people were unhappy that the designer’s credentials were so visible – more so on the Mercury Dime. But while he offered to change it, his insignia was allowed to stay as it was.

The coin’s design looks similar to some of Weinman’s other work. These include his Union Soldiers and Sailors Monument in Baltimore – which had Lady Liberty carrying branches, and his medal for the American Institute of Architects – which had an eagle with a laurel branch. And unfortunately for Barber, Weinman studied under Augustus Saint-Gaudens!

The mint mark on a coin can sometimes raise the value of a coin because collectors seek specific years, errors, and locations. The mint mark is usually the last feature added to a coin, and until 1989, it was placed by hand. This could cause errors like RPMs (re-punched mint marks) or MPMs (misplaced mint marks). Let’s start by reviewing the three mint locations. 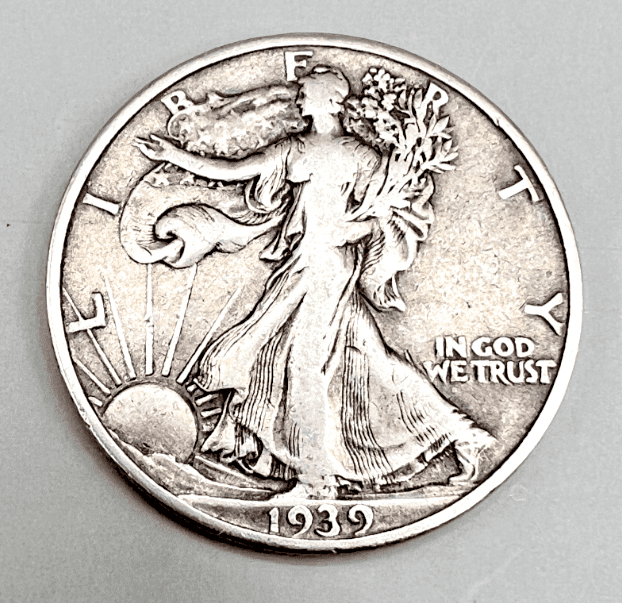 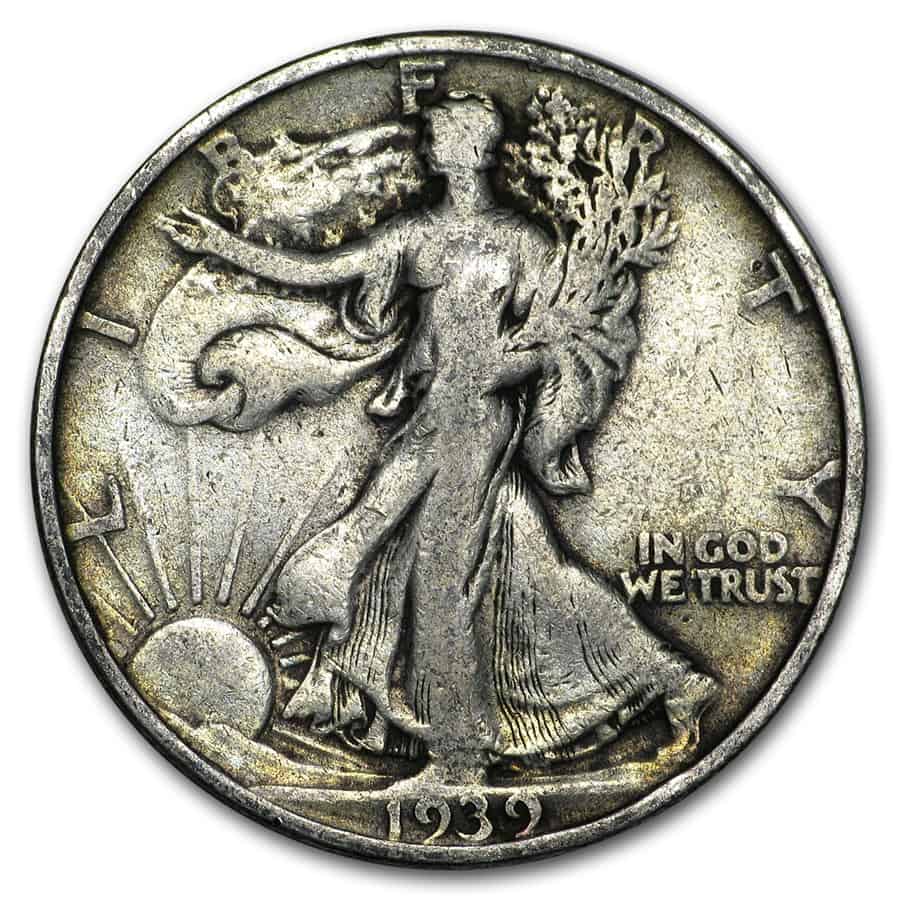 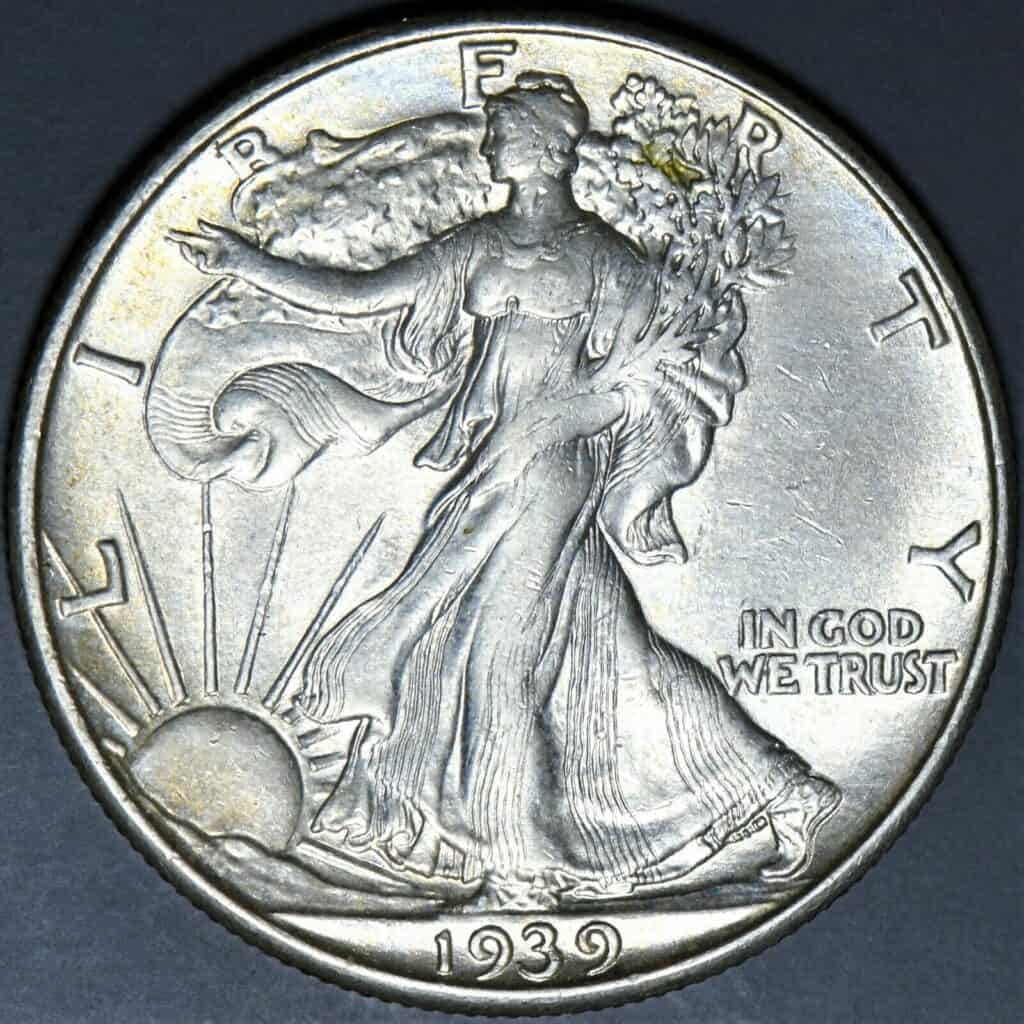 Proof Coins can either be matte or mirror-like, though the US Mint only made matte proofs between 1909 and 1917, mostly to accommodate curvy high-relief designs. And from 1918 to 1935, they didn’t make proofs at all, resuming in 1936. Proof coins are mainly made as a tool for quality control. They’re a kind of test run to ensure the coin dies and designs are accurate.

A copy usually goes to the archives and/or national museums. The rest are sold to collectors at premium rates. This earns extra cash for the mint. Proofs often have a mirror-like field and a frosted device, though some modern coins have a frosted field and a reflective device instead. Before striking, planchets are tumbled in a vat of stainless steel balls to get shiny.

The mirror-like planchets are then rinsed to remove any residue. The die is also polished using horsehair brushes to produce a reflective finish. As for the frosting, until 1970, the hazy sections of the die were pickled in acid to create that trademark texture. But the acid wash faded with every coin strike, so only the first 50 to 100 coins had extreme contrast.

These coins are graded Deep Cameo by PCGS or Ultra Cameo by NGC. The next hundred or so will be cameo coins while the rest are regular proofs. But after 1971, the mint used lasers run by computers to frost the coins. Since this doesn’t fade with time, all modern proofs meet the Deep Cameo or Ultra Cameo grade, aka DCAM or U-CAM. But coins can be PL or DPL.

This means Proof-Like or Deep-Proof-Like and refers to highly reflective but unburnished regular strike coins that weren’t polished before striking. You might find these among satin-finish coins or uncirculated sets. To create these sets, mint workers select the best quality business strike coins and sell them to collectors before the coins get damaged in circulation.

Errors can make your coin extra valuable, so you should get familiar with the common ones. They mostly happen at the mint, and here’s how the process goes. An 8” prototype made of plaster, rubber, and epoxy goes into a reducing machine to make a steel master hub. This takes several days. The master hub strikes a master die, which later makes working hubs.

These working hubs subsequently make working dies, and the dies strike planchets to make coins. All these steps need at least two strikes (except in SMS coins, which are struck once at high pressure). If the metal moves between strikes, you can get various doubling or tripling errors that are worth money. You might also get misalignment errors or coin contaminants.

DDO means doubled-die obverse. It happens when the die shifts between hub strikes, so the second impression lands in a slightly different spot. This flaw is then transferred to every coin made with the error die. And since one die could make thousands of coins, it becomes a variety. An MS 65+ was $1,364 in October 2014. An MS 66 is currently estimated at $1,500.

RPM means re-punched mint mark. As we said before, it’s a doubling error that occurs when the second hand-punch strike doesn’t hit the same spot as the first one. You’ll see traces of the earlier mint mark underneath, and that gives the coin value. It’s written as D/D and read as D over D. An MS 64+ sold for $1,293 in September 2017 but only $1,087 in January 2020.

FAQs About the 1939 Half Dollar

Where is the Mint Mark on the 1939 Walking Liberty Half Dollar?

It’s on the reverse, under the mountain pine on the lower left of the coin. For reference, the earliest coins from 1916 and part of 1917 had it on the right obverse, under In God We Trust.