What is a 1937 wheat penny worth? This is probably the question you have in mind after finding a rare Lincoln cent in your pocket change.

Well, the 1937 wheat penny value will depend on the coin’s condition, whether it has a prominent error and its grading.

If all this sounds a bit confusing, don’t worry—I will explain everything you need to know about how much your 1937 wheat penny is.

In this article, I will first explore the coin’s interesting history and unique design; then, we will jump right into the value of the 1937 Lincoln wheat coin and the different varieties and errors that might be worth thousands of dollars.

History Of The 1937 Wheat Penny

The 1937 Wheat Penny belongs to the long-standing Lincoln coin series. There are more than a dozen types of Lincoln coins, but the Wheat Penny is undeniably the most popular among collectors.

The United States Mint first minted the Lincoln Wheat Pennies, also known as Wheaties, in 1909. President Theodore Roosevelt instructed designer Victor D. Brenner to design a coin to commemorate the centennial year of President Abraham Lincoln. The coin became the first national coinage to feature a U.S. President’s portrait, so it was a big deal.

It took many iterations before the U.S. Mint, and the designer could agree on the coin’s final design. Brenner, who had only produced medals before and had never worked on coins, wanted to create a complex coin design. But, the U.S. Mint Engraver Charles Barber wanted a simple, flexible design that would be attractive without wearing the coin.

Ultimately, the Mint and the designer agreed to lower President Lincoln’s torso, allowing his face to point more toward the coin’s center. The resulting design left a lot of space at the top of the coin’s obverse side.

However, Chief Engraver Barber objected to using the artist’s three initials and asked that they be removed, or only one initial be used. This directive forced the U.S. Mint to remake the reverse dies, removing Brenner’s three initials.

Over the years, Lincoln penny’s composition has changed severally. When the coin was first minted in 1909, it primarily contained copper and stayed this way until 1981. In 1982, the world was plunged into a copper crisis prompting the U.S. Mint to produce coins made from zinc, which was considerably cheaper than copper, silver, and steel.

Features Of The 1937 Wheat Penny

Let’s now look at the unique features of the 1937 Wheat Penny.

The Obverse of the 1937 Wheat Penny 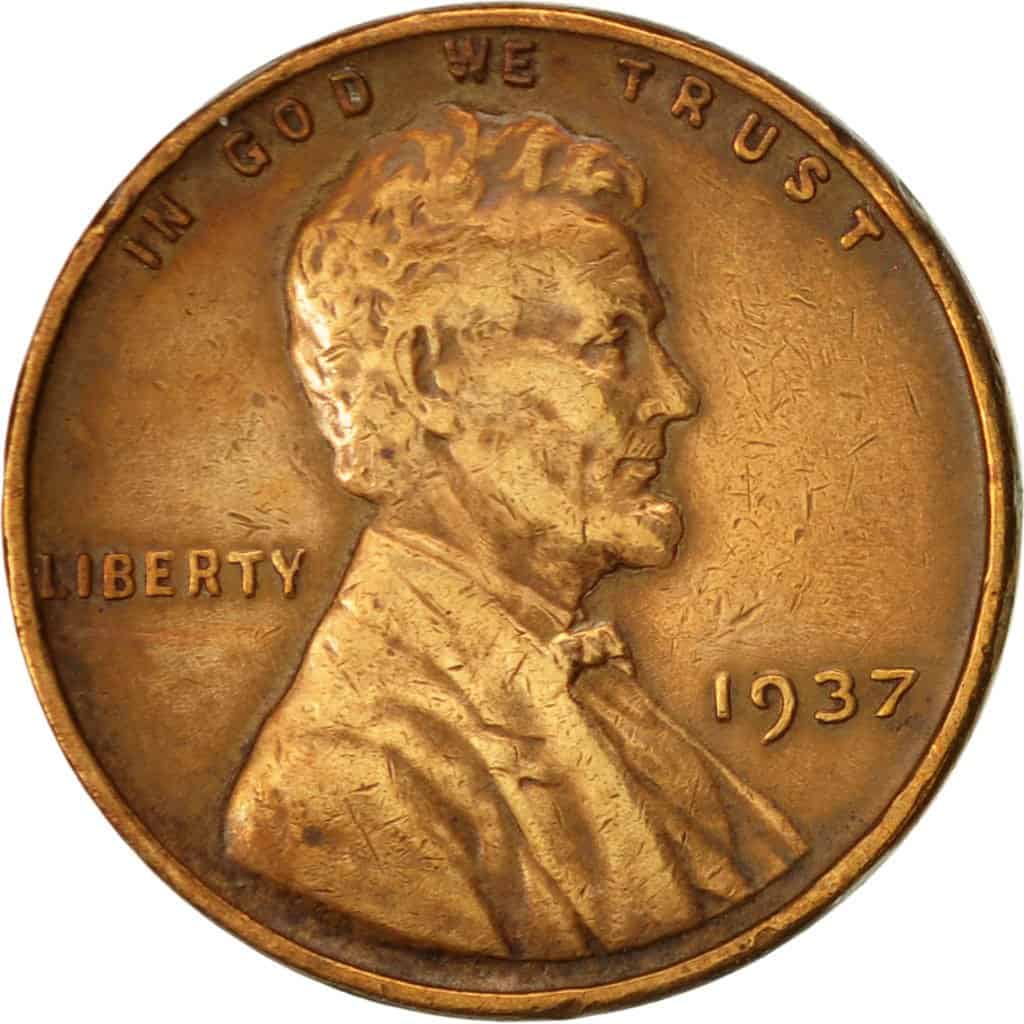 The obverse, also known as heads, is the top-facing side of a coin. The obverse of the 1937 Wheat Penny features the right-facing portrait of the first president of the United States, Abraham Lincoln. The President wears a tuxedo accessorized by a bow tie.

The word LIBERTY appears on the left side of the coin’s obverse, right behind Lincoln’s back. To the right is the coin’s year of manufacture, 1937, placed horizontally and adjacent to the President’s chest.

Around the top of the coin are the words, IN GOD WE TRUST.

The Reverse of the 1937 Wheat Penny 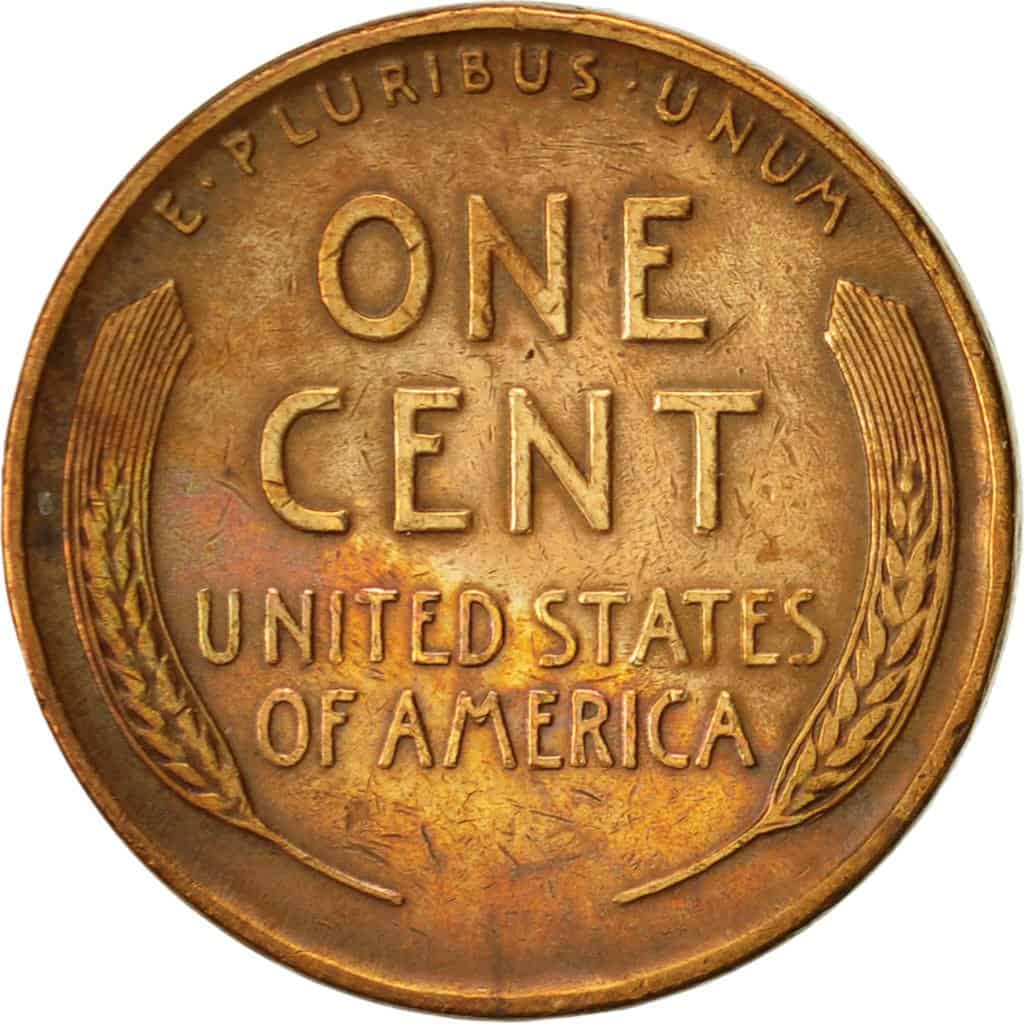 The reverse, also known as the tails, is the coin’s back side. The reverse of the 1937 Wheat Penny coin features the words ONE CENT imprinted at the center of the coin in larger font size.

Right underneath the coin’s denomination are the words UNITED STATES OF AMERICA, taking up two lines horizontally across the coin.

Around the top of the coin is the motto: E PLURIBUS UNUM.

On each side of the coin’s reverse is a wheat stalk, from where the coin’s name comes.

Other Features of The 1937 Wheat Penny

The Wheat Penny weighs 3.11 grams and has a diameter of 19mm. This coin comes with a smooth edge instead of a reeded one.

The coin appears reddish brown due to its high copper composition

Let us look at each coin and discover how much is a 1937 Wheat Penny. 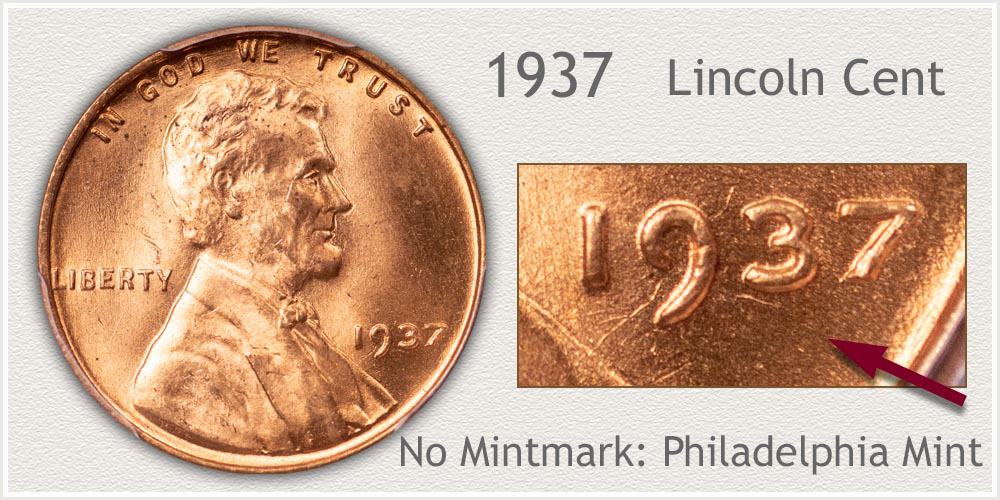 The 1937 Wheat Pennies minted at the Philadelphia facility do not have a mint mark.

A total of 309,170,000 no-mintmark 1937 Lincoln coins were minted, and with such a large mintage, many of these coins are still readily available in circulation.

Due to its ready availability, the no-mintmark 1937 Lincoln cent is worth more or less its face value. In circulated condition, the 1937 Wheat Penny value is between $0.10 and $0.80, depending on the coin’s condition.

The coin is also easily available in uncirculated, mint condition, and any collector can afford it. The 1937 Lincoln Wheatie becomes scarce in higher grades, with only a few hundred examples known in mint state (MS) 66 and MS67. A few examples of MS68 Lincoln Wheat Pennies from 1937 exist.

According to the Professional Coin Grading Service (PCGS), the most valuable 1937 Wheat Penny without a mintmark was sold for $7,200 in MS68 in 2019. 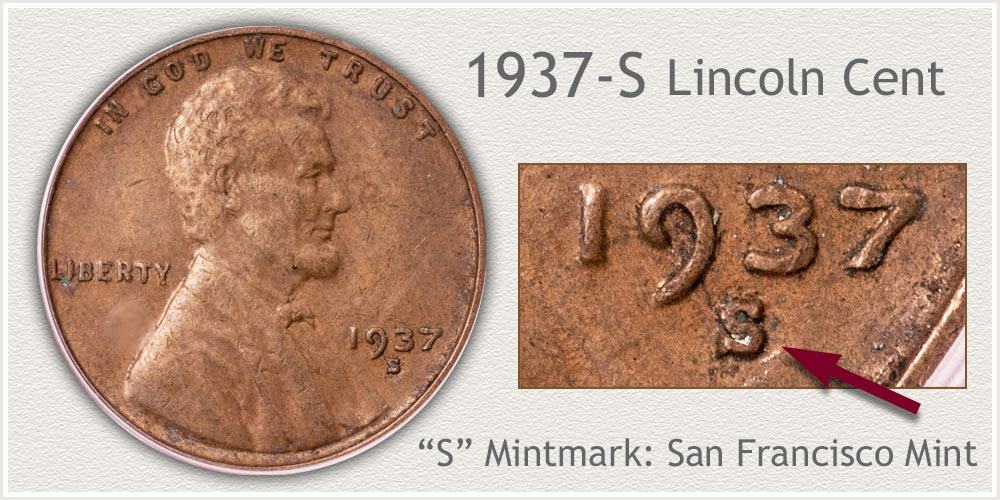 The San Francisco mint produced 34,500,000 Wheat Pennies in 1937. These coins were well-struck with the best quality die presses, and collectors saved rolls of these pennies. It is easy to find 1937 Wheaties in impressively good condition.

The coins made at the San Francisco facility feature an ‘S’ mintmark on the obverse, right underneath the year of production.

In circulated condition, 1937-S Wheat Pennies are worth between $0.10 and $2 depending on the coin’s condition.

There are several thousand examples of 1937-S Wheat Pennies in grades MS66 to MS67, and they are affordable to most collectors. The coin becomes more scarce in higher grades, starting from MS68 and above. 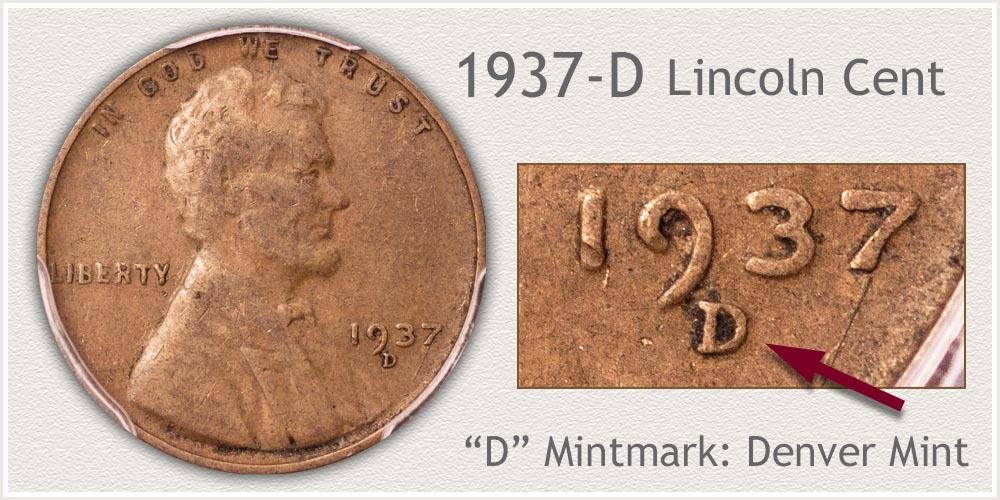 The Denver mint produced 50, 430,000 1937 Wheat Pennies. Like the Philly and San Francisco mints, the Denver facility produced high-quality Wheaties. Many examples are available today, thanks to collectors who hoarded these coins when they were newly minted and released into circulation.

In average circulated condition, the 1937-D Wheat Penny is worth between $0.10 and $1.75, depending on the coin’s condition and extent of wear and tear.

In MS65 and below, these coins are generally easy to find. They are scarce in MS66 to MS67 and difficult to come by in MS68. 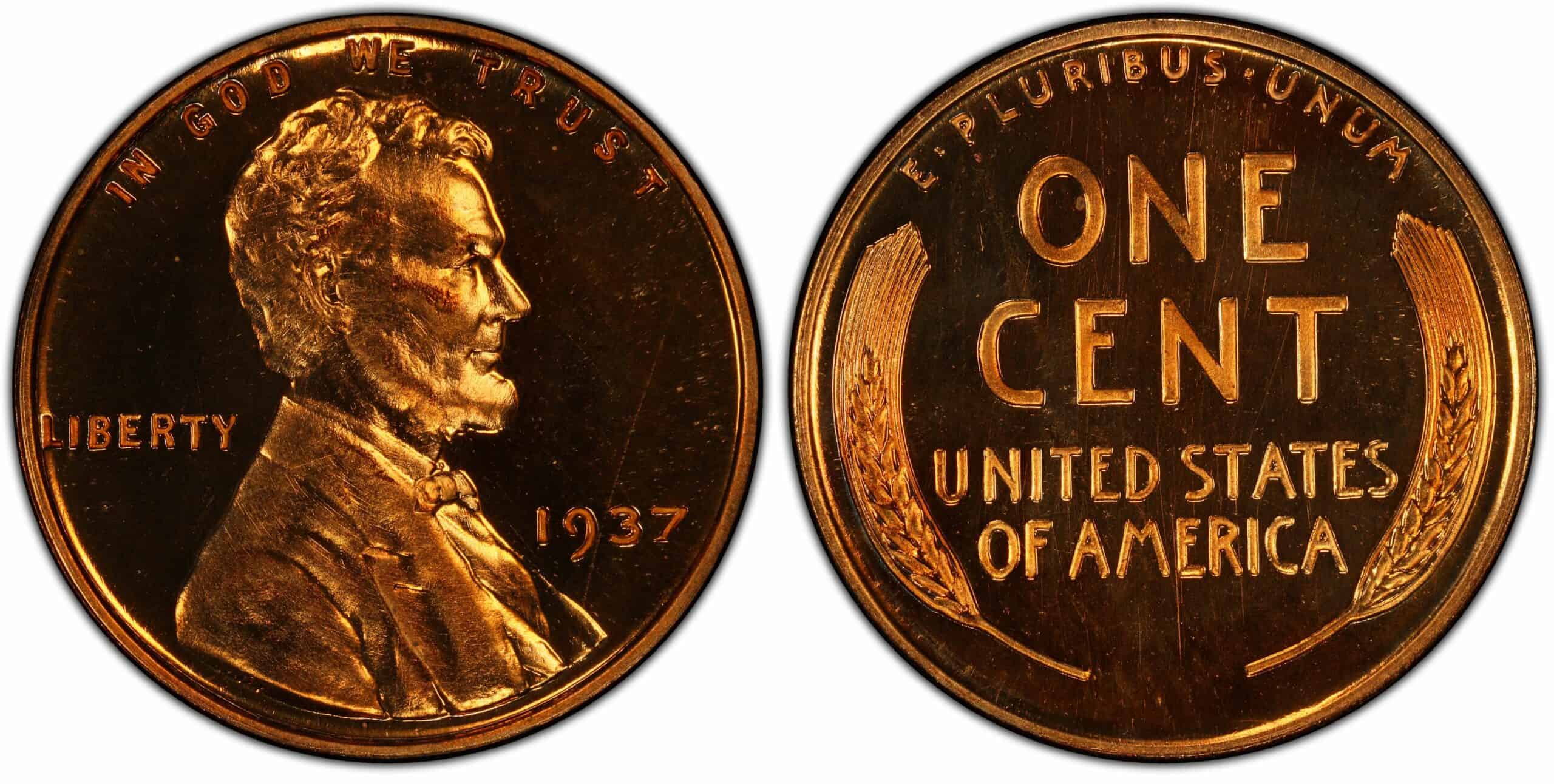 In 1937, the U.S. Mint produced 9,320 Wheat Penny proofs for collectors. These coins were struck multiple times to produce a high-quality, brilliant, and aesthetically appealing coin.

Many examples in PR65 exist, given that the coins were not released into circulation. In higher grades such as PR66 and above, Proof Wheat Pennies from 1937 become increasingly scarce, with less than 300 known examples and less than two dozen examples in PR67.

Some 1937 Wheat Pennies were released into circulation with noticeable errors and quirks. Knowing the different coin errors in that year can help you identify valuable 1937 wheat pennies.

Let’s take a look at the 1937 Wheat Penny errors you should pay attention to: 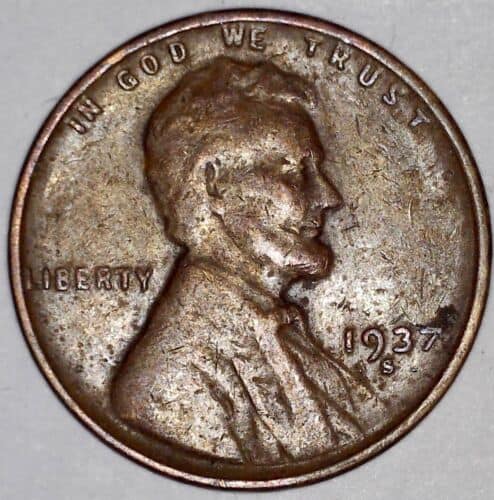 The repunched mintmark error is a type of doubled die error. In 1937 Wheat Pennies, the error is noticeable on the Denver and San Francisco minted coins, where there is some doubling and sometimes tripling of the D and S mintmarks, respectively.

Repunched mintmark Lincoln pennies are worth about $3, but this value could be more if the doubling is particularly drastic or very easily noticeable.

Off-center error coins are the second most popular after doubled dies. The off-center coin occurs when the coin is struck incorrectly or when the die is not centered.

The more-off centered the design, the more valuable the coin would be, as long as the date is visible. 1937 Wheat pennies with a 5 to 10% off-center error can fetch up to $120, while one with a 50% off-center strike with the date intact can be worth $100 or more.

Die breaks are yet another collectible error. This error forms when old or damaged dies imprint the designs on a coin, resulting in raised spots or lines on the obverse or reverse of the coin.

The bigger or more visible the die break, the more valuable the coin. When looking for a worthwhile error coin, you should pay attention to die breaks that drastically alter the coin’s appearance. Such a coin is typically worth between $10 and $25.

Another type of die break is the 1937 Wheat Penny clipped planchet. This coin features a curved or straight line along the edge as though the rim has been cut. Clipped planchet Lincoln Wheaties are worth between $20 and $30.

The U.S. Mint minted 394,109,320 coins, which is definitely a high mintage. Because so many of these coins were produced and released into circulation, it is not unusual to come across 1937 pennies in your everyday pocket change. Even though 1937 Lincoln pennies were made with a high amount of copper, these coins are generally worth their face value in average circulating condition and slightly more in mint condition.

The 1937 DVB pennies feature the coin designer’s initials. Victor David Brenner imprinted his initials, VDB, on the reverse of the Lincoln pennies, but the U.S. Mint and some lawmakers objected and asked that the coin be redesigned.

Several coins featuring the VDB initials were minted and released into circulation before the redesign, which saw the designer’s initials removed.

However, in 1918, the U.S. Mint restored Brenner’s initials on the obverse, making the font smaller. All Lincoln pennies minted in 1918 going forward, including the 1937 Wheat cents, feature the VDB initials.

1937 VDB coins are not special, rare coins; they are just ordinary 1937 Wheat Pennies worth face value in general circulation.