1936 isn’t a landmark year for Wheat Pennies in general. But two kinds of people keep an eye on these things. One, numismatists, who focus on the art, discipline, merit, and history of coins. And this group will be interested in 1936 Pennies because it was the first year for proof coins in two decades! With that in mind, let’s look into the true 1936 Wheat Penny Value.

History of the 1936 Wheat Penny

Wait … what’s the second category of people that study coin prices? Well, they include dealers, resellers, and fund managers who look at coins for their investment potential and profitability. For this set of speculators, errors and mintage figures might be more important than the existence or absence of proof coins. Especially since proof coins aren’t that pricy.

Does this surprise you? If you’re a newbie, yes, because proofs are so shiny that surely they must cost more than dull brown dented pennies! Well, for investors, rare coins fetch the best prices. This means a good-looking coin that accidentally slipped into somebody’s pocket change is worth more than a fancy proof coin that spent its entire life in a protective case!

You see, proof coin collectors know what they have, so these coins are well preserved, and you can find thousands in high grades. But circulated coins aka business strikes get damaged and worn down through everyday use, so to find a gorgeous coin among piles of mundane ones, that’s the real treasure. For now, let’s get back to the history of these Wheat Pennies.

They were introduced in 1909 at the behest of Theodore Roosevelt, the 35th President of the United States. He wanted coins that weren’t just practical and valuable, but beautiful too. So while earlier coins were designed by in-house mint engravers, this new set would be made by artists that worked in commercial spaces. And that’s partly where the real trouble began…

Mint engravers were government workers. So they were concerned with practical things like seignorage. That’s the difference between the production cost and face value of a coin, and it’s a big source of revenue at the mint. Naturally, mint engravers preferred coins that were cheaper to mint, so they chose simple designs that extended the life of expensive equipment.

Unfortunately, the high relief, fussy devices, and detailed décor on these new coins made dies wear out up to three times faster. Some designs needed additional die and hub strikes to bring out every element clearly, and that was even more punishing on mint dies, leading to high replacement costs. Dies were used longer to stretch budgets, and that affected quality.

Resellers enjoyed this because error coins from older dies gave better profits, but these flaws were still blamed on the mint. Also, mint engravers were on a salary. They didn’t need as much recognition as commercial artists. So when they designed a coin, they were allowed to sign their initials, but they kept these signatures small, unobtrusive, and barely visible.

External artists, on the other hand, were only paid a few thousand dollars for their work. So they tended to use bigger signatures that could get them further commissions. This was the case with Victor David Brenner, who placed his entire surname on his first attempt at the Lincoln Penny. When the Mint Director objected, he changed it to a VDB that was still big.

The coin then went through the motions and was minted for the public. But the media, some mint officials, and the public soon noted the VDB was bigger than usual and condemned it as advertorial. In the ensuing mess, the designer’s initials were scrubbed off the coin completely and didn’t return until 1918. So while the 1936 Wheat Penny has the VDB, some years don’t!

Features of the 1936 Wheat Penny

The steel working dies then strike planchets (metal blank discs) into coins. All these stages involve hitting the target surface multiple times, and if that target metal moves between strikes, you get die errors or coin errors. First, let’s discuss the backdrops (aka the fields), devices (aka images), and legends (words) that characterize the 1936 Wheat Penny.

The Obverse of the 1936 Wheat Penny 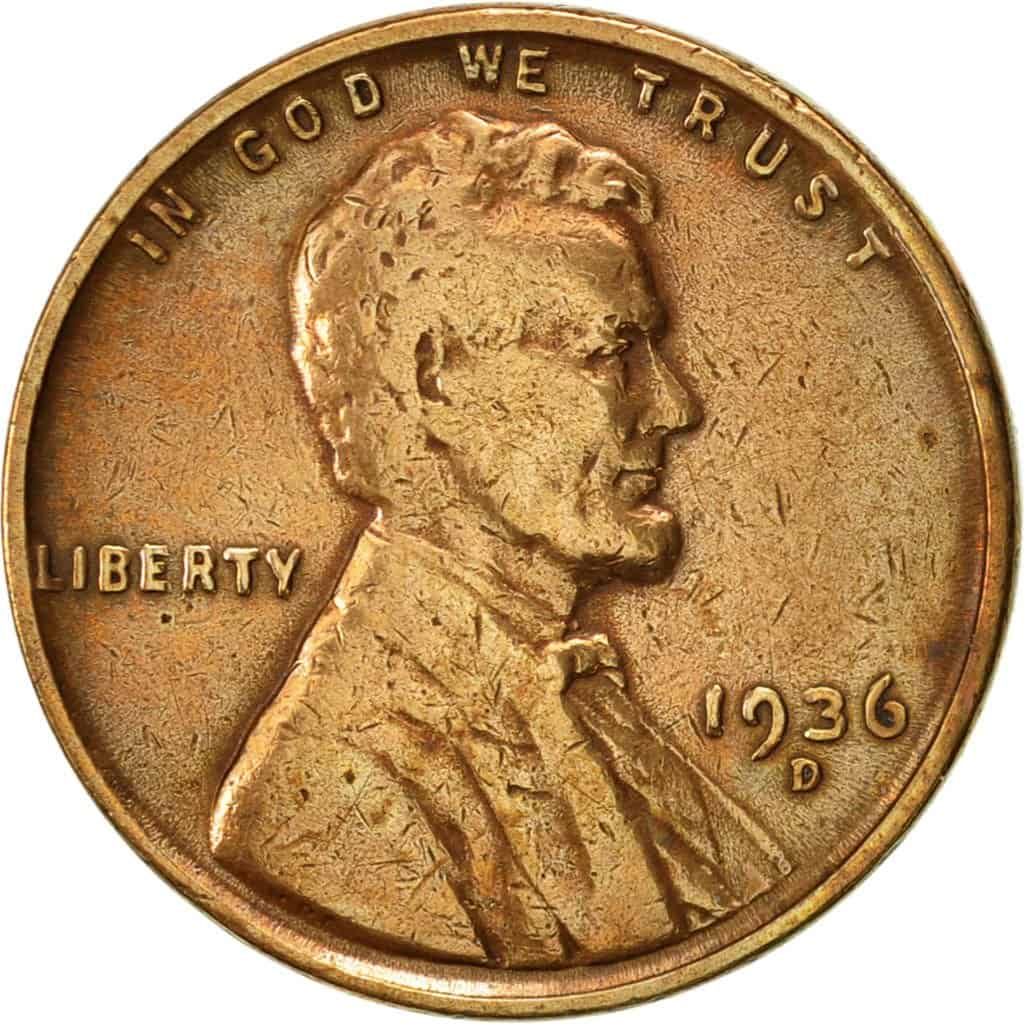 The obverse (heads side) of the 1936 Wheat Penny has a profile of Abraham Lincoln, the 16th President of the United States. In God We Trust runs along the upper collar over his head, with Liberty on the left side of the coin. The mint year and mint date appear on the right of the coin. At the shoulder cut-off, the coin designer’s initials, VDB, are engraved on this cent.

The Reverse of the 1936 Wheat Penny

The reverse (tails side) of the 1936 Wheat Penny has a fairly simple design. The device is a pair of durum wheat stalks that line the sides of the coin, framing the legends in mixed fonts. At the top, E Pluribus Unum runs from the tip of one wheat sheaf to the other, with dots between the words. Next comes One Cent, and finally, the legend United States of America.

Other Features of the 1936 Wheat Penny

The 1936 Wheat Penny was made of 95% copper with the remainder in either tin or zinc, sometimes a mixture of both. It has a smooth or plain edge, which means it doesn’t have any reeds, and the coin weighs 3.11g. The 1936 Wheat Penny is one of the Small Cents, measuring 19.05mm in diameter. Large Cents were almost 3cm but reduced due to rising copper prices. In 1936, the Philadelphia Mint made 309,632,000 Wheat Pennies without mint marks. For reference, copper pennies are graded as RD for red, which is the best rating, followed by RB for reddish-brown and BN for brown. This applies to copper coins from all three mints. The Wheat Cents from Philadelphia had the highest mintage and are roughly $10 in mint states.

DDO means doubled-die obverse. This mint error occurs if the die shifts between hub strikes, which means the next strike appears slightly to the left or right of the first design. The best place to check for doubling (or tripling or quadrupling) is on the words and numbers. Also, there’s no confirmed record of how many (P) DDOs were made in 1936.

Die errors are called varieties, because every coin minted from that die will have the exact same error. And with this 1936 (P) DDO, three different types – or varieties – exist. It’s a tiny coin, so you need a coin microscope or jeweler’s loupe to catch the doubling. Samples have sold for $8,400 and $21,150. Both were Type 1 DDO (FS-101) graded MS 66 RD by PCGS. 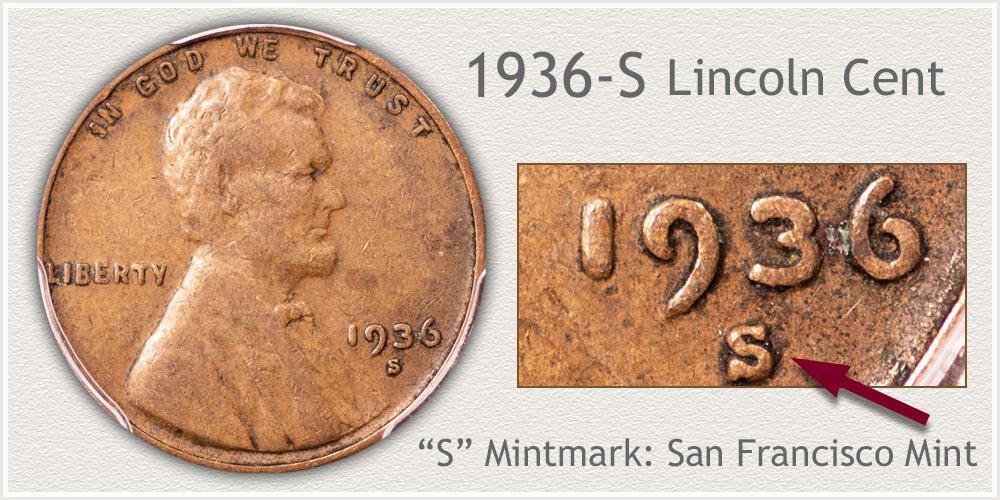 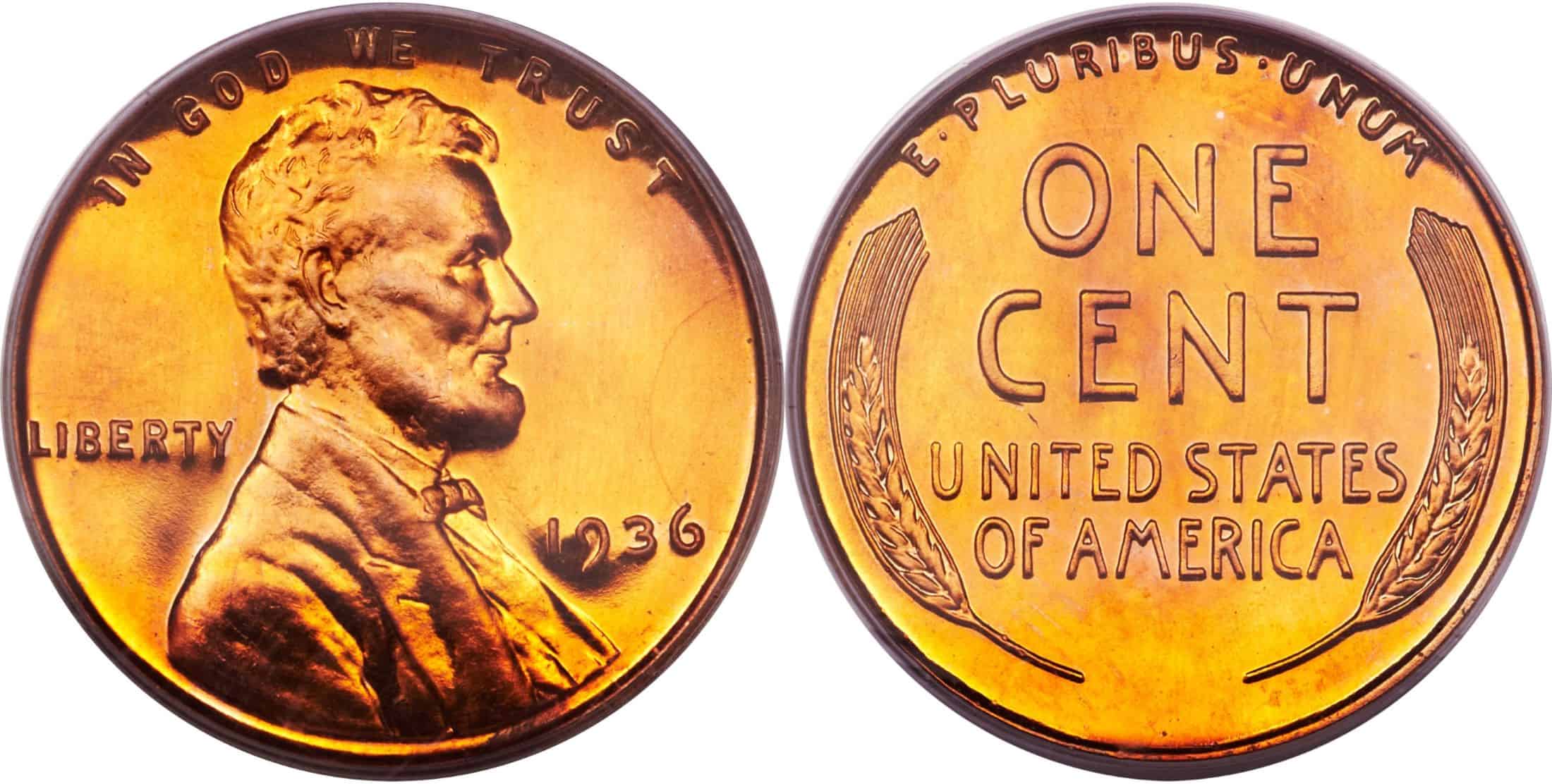 These days, proof coins are made in San Francisco, but back then, they came from the Philadelphia Mint and bore no mint marks. Also, for the Lincoln Cent, in particular, earlier proofs were Matte Proofs, because the US Mint didn’t have the right techniques to make mirrored proofs on such a curvy coin. From 1918 to 1935, they didn’t produce any at all.

Then in 1936, they acquired reflective proof technology, experimenting with 5,569 satin finish proofs (aka Type 1) and an unverified number of brilliant finish proofs (aka Type 2). These proofs were made by pre-polishing the planchet sheet to a mirror finish, then treating the die with special chemicals to ensure the device appeared frosted and had sharper detail.

The first 50 to 100 coins from any die would have dramatic contrast, so PCGS grades them Deep Cameo (DCAM) while the next 100 or so are Cameo (CAM). After that, proof coins are still super shiny, but the contrast isn’t that distinctive. A PR 65 RD in Satin Finish sold on eBay for $1,995. Only 3 Brilliant Finish PR 66 CAMs are known, and one sold for $8,000.

The final factor that affects the 1936 Wheat Penny Value is the type of error a coin exhibits. Some can raise the price of a coin by a few cents while others can make a 1c coin resell for hundreds or even thousands of dollars! Let’s take a look at the top errors listed by experts. The earliest acknowledged errors are listed as FS by numismatists and other coin authorities.

In case you’re wondering, the FS in error coins stands for First Strike, meaning the coin was submitted to PCGS for grading within 30 days of its release. But on coins that have steps or staircases on their devices e.g. Monticello or Lincoln Memorial, FS means Full Steps, where most of the steps are clearly seen and counted. The most valuable ones are rated 5FS or 6FS.

FAQs About the 1936 Wheat Penny

In general, the 1936 Wheat Penny isn’t that rare. But the 1936 (P) Proof is sometimes classified as a conditional rarity, which means it’s rare in certain circumstances. This was the first year they made reflective proof pennies. They minted about 5,000 in satin finish and an unknown number in brilliant finish. Before this, the mint hadn’t produced proof pennies for nearly two decades. Even then, the proofs were matte. So 1936 Proof Pennies can get pricy!