History of the 1935 Buffalo Nickel

From 1792 to 1873, Americans used a silver half-disme coin (the ‘s’ was silent and was later dropped). Then starting 1866, a cupronickel 5-cent coin was introduced to replace it. This was a direct response to silver stackers who were hoarding silver half-di(s)mes for their melt value since silver prices were so high that melted coins were worth more than intact ones.

The first cupronickel 5-cent coin was the Shield Nickel, used from 1866 to 1883. The Liberty Head Nickel came next, from 1883 to 1912. Then came the Buffalo Nickel from 1913 to 1938. Finally, the Jefferson Nickel appeared in 1938 and we still use it today. The Buffalo Nickel was sometimes called the Indian Head Nickel. Many prefer the less offensive term, Buffalo.

But some have referred to it as the Native American Head Nickel. This naming convention comes from the buffalo on the back and the Native American Chief on the front of the coin. Also, technically, it’s a bison, not a buffalo. The two are both bovine creatures, but the buffalo mostly lives in Africa and Asia while the bison is native to America. It makes a pretty nickel.

This is important because the Buffalo Nickel appeared in response to the president’s need for beauty. Theodore Roosevelt, the 26th President of the United States, felt American coins were ugly and lacked artistic merit. So he requested the mint to hire professional artists who could make the coins attractive. They started with the gold series in 1904 (eagle, double eagle, etc.).

The first professional sculptor on the job was Augustus Saint-Gaudens. He redesigned the eagle ($10 gold coin) and double eagle ($20 gold coin) before he died of cancer. Some of his assistants stepped in to continue the assignment. Victor David Brenner designed the Lincoln Cent, while James Earle Fraser designed the Buffalo Nickel. But he did face a bit of backlash.

Hobbs Vs the Buffalo Nickel

Fraser made three sketches, and the mint chose the bison and Native American Chief, but it’s unclear who posed for the portrait. Possibilities include Iron Tail, Big Tree, and Two Moons. Some warriors toured the States claiming to be the Buffalo Indian. The bison was assumed to be Black Diamond from the Bronx Zoo or the Central Park Zoo, but this has been debunked.

Clarence Hobbs owned the Hobbs Manufacturing Company, a firm that made machines to detect fake coins. The Buffalo Nickel confused his machines, so he asked for several changes. His interference dragged the process from July 1912 to February 1913 when Fraser protested via a 10-page letter. Treasury Secretary Franklin MacVeagh held a meeting to settle things.

The meeting simulated a legal hearing, and in the end, Fraser was allowed to continue with his coin. While the public loved the coin, media outlets and numismatists weren’t as easily impressed. They noted that the coin was gorgeous while new, but would soon lose its beauty in circulation. Unfortunately, they were right. The dates and features soon wore off the coins.

Also, the coins were hard on their dies, which broke three times faster than Liberty Head dies. The mint tried adjusting the design by flattening the hill that the bison was standing on and enlarging the denomination. Sadly, these Type II Buffalo Nickels deteriorated dies even faster than the Type I Buffalo Nickels. So by 1938, the mint was happy to phase them all out.

An important note is while the coin beautification project started under Theodore Roosevelt, the Buffalo Nickel was minted under the next president, William Howard Taft (1909 to 1913). He launched the coins on 22nd February 1913, giving out 40 samples to top Native American Chiefs. Taft approved Fraser’s payment on March 3rd, his last official day as the US President.

Features of the 1935 Buffalo Nickel

The 1935 Buffalo Nickel has the same features as its siblings from other years. Like many products and services (think books and movies), the ordinary citizen loved them, but the professional critics aka numismatists and media reps hated these aesthetic Buffalo Nickels.

But the design choice was vindicated when the bison was used on the American Bison Nickel aka the Westward Journey Nickel. It was coined in 2005 and featured Thomas Jefferson on the front and a right-facing bison on the back. Earlier bisons faced left, FYI. Let’s explore!

The Obverse of the 1935 Buffalo Nickel 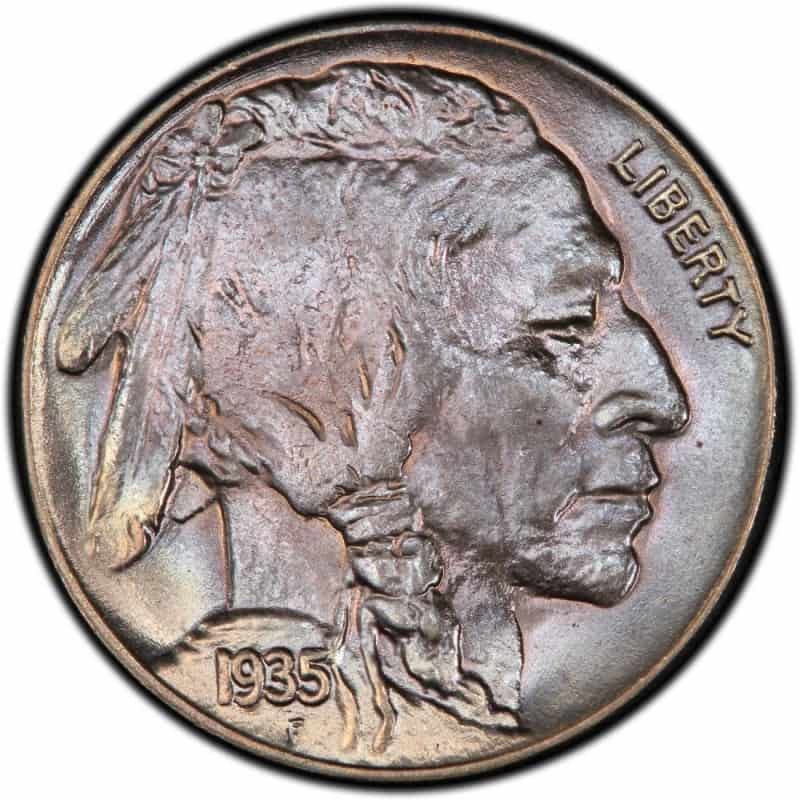 The obverse (heads side) of the 1935 Buffalo Nickel features a Native American Chief with feathers in his hair. It’s a closely cropped coin, and his features are quite close to the collar. The legend Liberty is squashed along the upper right collar, in front of his forehead and nose. The date is beneath his neckline, next to his side braid, and the F for Fraser is under the date.

The Reverse of the 1935 Buffalo Nickel 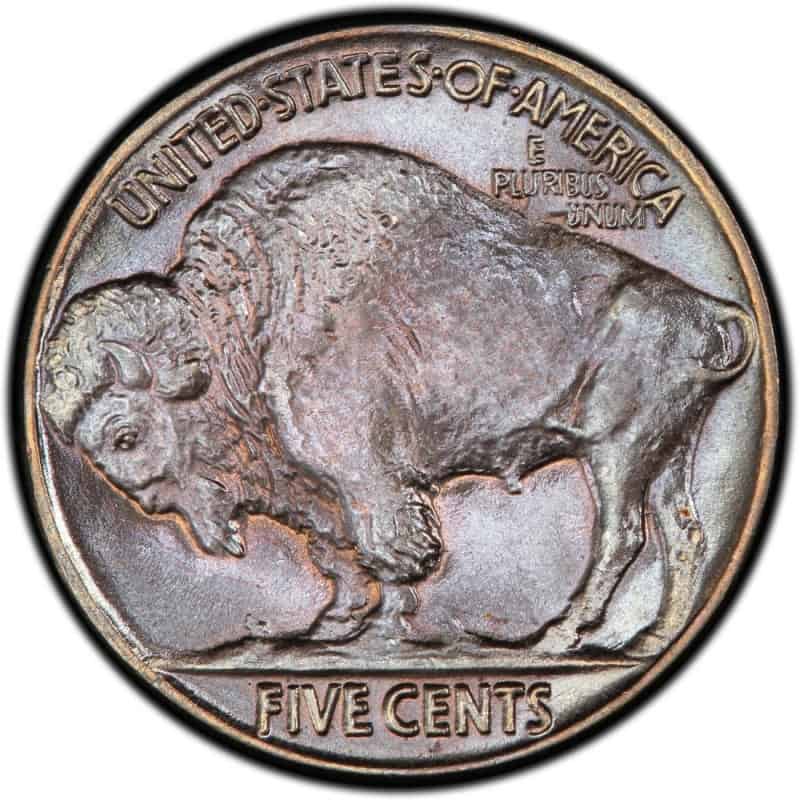 The reverse (tails side) of the 1935 Buffalo Nickel features a bison that occupies most of the coin. Above its shoulder is the legend United States of America, with E Pluribus Unum tucked over the bison’s lower back. The bison stands on flattened ground, with Five Cents beneath its feet. The mint mark appears on the reverse, below the denomination of the coin.

Other Features of the 1935 Buffalo Nickel

The 1935 Buffalo Nickel is 21.21mm in diameter (0.835”) and 1.95mm thick (0.077”). It weighs 5g and has a smooth, unreeded edge. Its metal composition is 75% copper and 25% nickel with the nickel on the outside, giving the coin a shiny silver appearance. Design flaws mean many existing Buffalo Nickels have the date worn away from frequent coin handling.

Fraser was paid $2,500 to design the coin, plus $666.15 for the extra edits. The value of a coin is typically driven by the clarity of the details, which also dictates the coin grade. On Buffalo Nickels, the spots that got most damage were on the raised parts i.e. denomination, date, and the bison, specifically its tail and horns. Let’s look at the 1935 Buffalo Nickel Value. 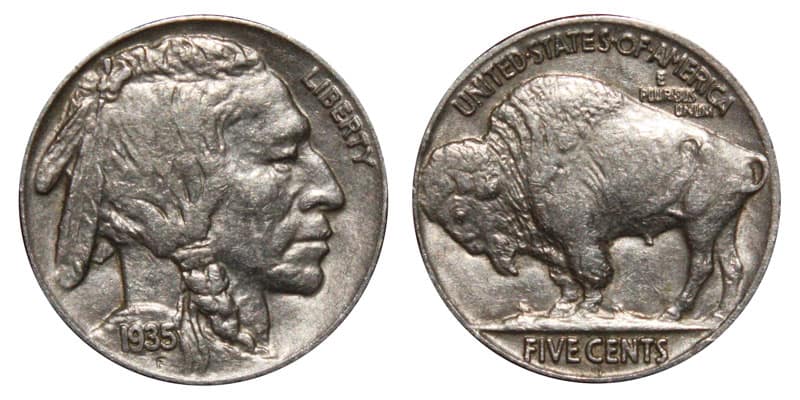 SMS Coins (Special Mint Sets) are struck only once, but with extra pressure to ensure clarity. All other coins are struck multiple times at the hub, die, and coin stages. Movement between strikes can cause errors. And while some errors are only worth a few cents, others can raise your 1935 Buffalo Nickel Value into thousands. Let’s look at various flaws to see what’s what. 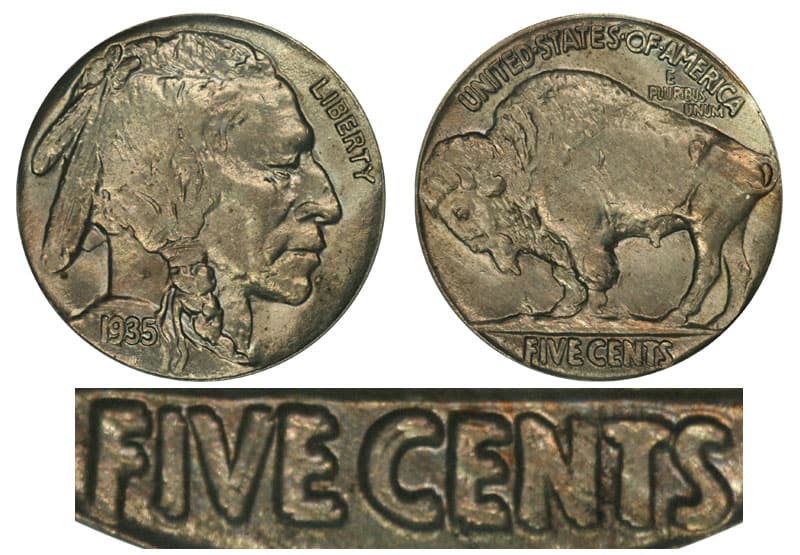 DDR errors happen when the die shifts between strikes, causing a doubling effect on the letters or numbers. DDR means Double Die Reverse, so the error occurred on the reverse die that was made for the tails side of your coin. A 1935 S Buffalo Nickel DDR costs $120 in VF 20, $400 in AU 55, and $1,000 in MS 64. You’ll spot doubling on the L and U in Pluribus.

Most of the minting strikes are done by machines. But until 1989, mint marks were stamped by hand using a mallet and a hand-held punch. This is why RPMs (re-punched mint marks) are common. In this case, the RPM is an S on top of another S, which means the coin moved slightly between strikes. They’re easy to see but aren’t worth much: $30 to $40 in XF grades.

Denver Buffalo Nickels have some re-punched mint marks too. Sometimes, the re-punch is hidden inside the original mint mark. But other times, one of the marks sits sideways or is slightly skewed. It could also have shifted a bit to the left or right. This example has the first mint mark slightly south-east of the second D. It’s worth $80 in VF 20 and $550 in MS 64.

FAQs About the 1935 Buffalo Nickel

Buffalo Nickels wore out their dies quite quickly. Many existing coins have no dates, the buffalo’s features are unclear, and the denomination is barely legible. So if you find a Buffalo Nickel with sharp, distinct features, it could be valuable. At the same time, those fast-fading dies meant the coins had tons of errors, and certain listed errors can be worth a lot of money.

What is the Error in the 1935 Buffalo Nickel?

Are 1935 Buffalo Nickels Made of Silver?