Have you found a penny from 1929 in your pocket change? Wondering if this historic survivor might be worth some money? If so, you’ve come to the right place!

We’re going to investigate the 1929 penny value. We’ll find out how it got its nickname of the “Wheat penny”. And we’ll learn what factors make one of these coins rare and valuable.

Ready to find out more about the 1929 penny? Step this way!

History of the 1929 Wheat Penny

The Wheat penny is the name given to the first design of the series known as Lincoln pennies. These were launched in 1909, and have the image of Abraham Lincoln on the obverse. But it’s the reverse that gives the Wheat penny its nickname. That has the simple image of two ears of durum wheat.

The first Lincoln pennies were a landmark moment in the history of US coins. Until their appearance, no real figure had ever appeared on a coin. In fact, the idea of putting a real person on the currency was considered somewhat unseemly.

But as the bicentenary of Lincoln’s birth approached, that sentiment began to change. There were increasing calls to honor the former president on the nation’s coinage. And the bicentenary year, 1909, saw Lincoln replace the figure of Lady Liberty on the obverse of the penny.

The pennies made in 1929 were made from 95 per cent copper. The remaining 5 per cent was a mixture of tin and zinc. It was the same composition as the first Lincoln pennies, and it remained unchanged until 1943.

But the Second World War brought new challenges. It was necessary to release copper for the war effort, and the pennies made in 1943 were made from zinc clad steel instead. The copper this saved was enough to make 1.25 million shells. In 1944, the penny went back to its traditional copper composition.

Wheat pennies continued in production until 1958. In 1959 a new design, featuring the Lincoln Memorial in Washington DC, was selected to replace it.

Features of the 1929 Wheat Penny

The Obverse of the 1929 Wheat Penny 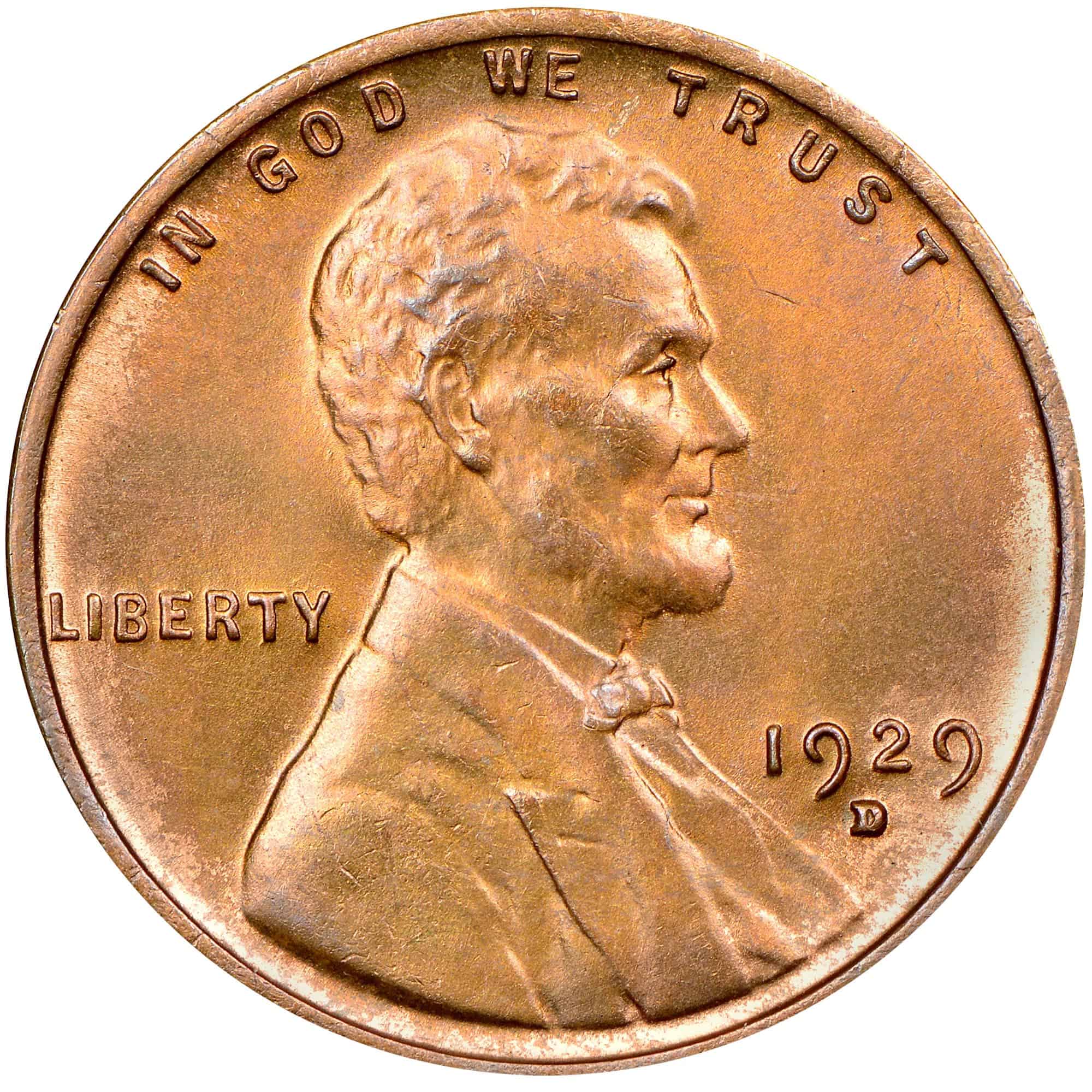 The heads side of coins is known as the “obverse”. And the obverse of the 1929 Wheat penny will be familiar to every American. It has the same portrait of Abraham Lincoln that’s appeared on every cent from 1909 to the present day.

The image shows the head and shoulders of the former president in profile. He faces right, looking bright and alert. The artist who sculpted it, Victor David Brenner, later wrote in a letter that he had imagined Lincoln as he would have looked reading to a child.

The image is believed to have been based on a photograph of Lincoln taken at the studio of Matthew Brady. Opinions differ on whether it was Brady himself who took the photograph, or one of his assistants.

Brenner had originally proposed to include his signature next to the portrait, but was told this would be unacceptable. So instead he suggested replacing it with his initials, and placing these on the reverse.

But even this was to cause controversy. Some claimed that the letters were too large, and that Brenner was effectively using the coin as advertising. Making them smaller would have delayed the production of the coins, so instead, they were removed altogether.

Brenner’s protests at the time were to no avail. But in 1918, his initials were reinstated.  You can find them on the obverse of the 1929 Wheat penny, tucked discreetly under the lower edge of Lincoln’s bust.

Above the bust is the motto “In God We Trust”. To its left is the word “Liberty”, and the date appears on the right.

Philadelphia pennies don’t have mint marks. But if your 1929 wheat penny was struck in Denver or San Francisco, it will be stamped with a “D” or an “S” respectively. You’ll find it just below the date.

The Reverse of the 1929 Wheat Penny 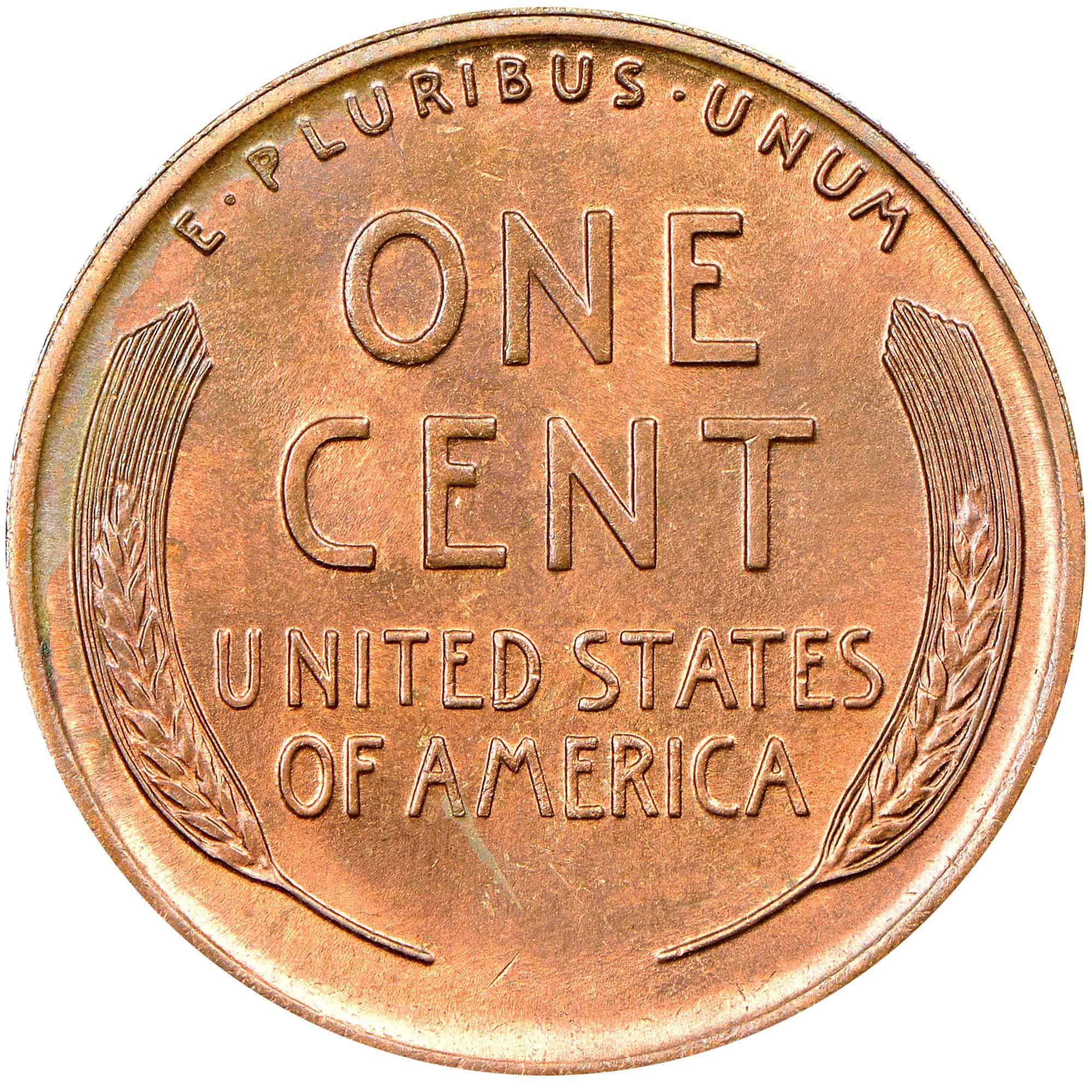 On the reverse of the 1929 Wheat penny are the ears of durum wheat from which it gets its nickname. It was Brenner who was responsible for this image too. But it wasn’t his first suggestion for the design.

That had been an image of a tree branch. But it was very similar to coins then being produced in France. Brenner was told to go back to the drawing board and to come up with a simple image. The ears of wheat were the result.

Running along the upper coin edge are the words “E pluribus unum”. This Latin motto means “From the many, one”, and references the creation of the USA from its constituent states.

The denomination appears in large upper-case letters in the middle of the coin, between the two wheat ears. And below it, in much smaller lettering, is the name of the country.

Other Features of the 1929 Wheat Penny

The 1929 Wheat penny measures 19 millimeters across. Its edge is plain (in contrast to “reeded” edges, which are grooved). And it weighs a little over 3 grams.

Because it is made mostly of copper, the color of the metal changes over time. It starts off a fiery red. But over time it turns brown, the result of handling and exposure to oxygen in the air. That color change means that Wheat pennies can be divided into three distinct categories.

Pennies that have retained their original red color over at least 95 per cent of their total surface area are designated “red”. You’ll often see this abbreviated to “RD” in coin descriptions. And it’s the most desirable of the three color classifications.

Next in line are coins that are red over between 5 and 95 per cent of their surface area. Those are known as “red and brown”, often abbreviated to “RB”.

Finally, there are brown coins, which are brown over at least 95 per cent of their surface area. These tend to be the least expensive of the three shades. Brown coins may, however, still fetch a good price if they’re high quality, or have attractive toning or an interesting error.

This YouTube video from CoinOpp looks in more detail at how to grade the color of Lincoln pennies. Philadelphia was by far the most productive mint facility when it came to 1929 Wheat pennies. It produced over 185 million of them, twice as many as Denver and San Francisco combined. They can be identified by the absence of a mint mark below the date.

The PCGS values 1929 (P) brown pennies graded up to VF25 (“very fine”) at $1 apiece. In practice, you can find many for about 5 cents. And values remain in single digits up to AU58 (“about uncirculated”).

Values for red and brown pennies are similar to those of brown pennies. The only major divergence is at MS66, where a red brown coin is valued at $150 more than a brown equivalent. In 1929, the Denver mint facility struck almost 42 million pennies. So just as with Philadelphia pennies, the lowest grade coins won’t be worth more than about 5 cents unless they have an interesting error.

Red and brown coins command a modest premium over brown ones. The finest known example is again graded MS66, and valued at $475. The San Francisco mint facility contributed just over 50 million coins to the mintage of the 1929 Wheat penny. And it’s among these that the most valuable 1929 pennies are to be found.

In circulated grades, values remain modest. Brown pennies can be picked up for just a few cents up to VG8 (“very good”). The finest brown examples at PCGS are graded MS65, and worth around $200. For red brown coins, the finest is a single coin graded MS66 and valued at $1,000.

Some of the pennies struck in San Francisco had their mint marks re-punched. Look at them under a microscope or coin loupe, and you’ll see the top of the first S just above the second. This type of error is often abbreviated to “RPM” in coin descriptions.

Just as with non-error coins, the value relates to the coin’s condition. At VF25, a 1929 S Wheat penny with a re-punched mint mark will sell for around $45. That increases to $90 at AU53.

This YouTube video from Treasure Town shows you how to find this error.

A lamination error is another type of Mint error. This is when the planchet – the metal disc used for the coin – cracks, peels or flakes. It’s usually thought to result from a problem with the metal alloy.

Search for 1929 Wheat pennies with errors, and you’ll find a number of examples of these. The value depends on the grading of the coin and how dramatic the error is.

At the time of writing, we found examples listed for sale at between $6 and $42.

Coins are known as “broadstruck” when they’re struck whilst not held firmly in place by a collar. As a result, there’s nothing to prevent the metal spreading out. The design can be either centered or off-center, depending on the position of the planchet when it was struck.

One 1929 S Wheat penny had this error. The planchet had spread to the top of the design on the obverse, and to the bottom on the reverse. It was graded AU50 by the PCGS. And at the time of writing, it was being offered for sale at $227.

Excellent condition, a red color, and an interesting error can all make a 1929 penny valuable. Uncirculated pennies (graded MS60 and above) will be the most valuable. But how much they’re worth can vary widely.

A brown 1929 penny from Philadelphia graded MS60 is worth about $15. The sole finest example from the San Francisco mint, a red penny graded MS67, however, is today valued at $65,000.

What year of Wheat penny is worth the most?

The most valuable Wheat penny ever to have been sold dated from 1943. That year saw the coins’ composition change from copper, zinc and tin to steel and zinc. But a handful of pennies were made from bronze in error.