Do you know what the nickel looked like in 1929? Here’s a hint: it looked nothing like it does today.

In 1929, the nickel had a unique design that has seldom been used in other US coins and it is very distinctly “American.” It is a popular coin among collectors, not only because of its unique design, but also because of its historical significance. At the time, they called it the Indian head nickel, but we know it today as the buffalo nickel.

Are you curious to know how much it is worth? Well, in this blog post, we will take a closer look at the 1929 buffalo nickel and discuss its value on the collector’s market, as well as some of its features and errors.

History of the 1929 Buffalo Nickel

First, let’s take a good look at the history of the buffalo nickel and how it got to be so popular among collectors.

The buffalo nickel was first minted in 1913 and it remained in circulation until 1938.  With a portrait of an American Indian on one side and a buffalo (actually, an American bison) on the other side, the buffalo nickel is widely considered to be one of the most stunning coins ever produced by the US Mint.

It was designed by sculptor James Earle Fraser, raised in South Dakota near the newly developing Indian reservations and the buffalo who roamed the Great Plains just outside his back door.

He was born in 1876, the same year that miners streamed into the Black Hills of South Dakota for the Deadwood Gold Rush, and he had a railroad engineer father who helped collect the remains of General Custer’s army following the Battle of Little Bighorn. Also, James Earle Fraser left for art school at the same time as the Wounded Knee massacre happened, making it pretty apparent that the Native American’s plight and way of life had a significant impact on him.

You can see this impact in many of his works, including the buffalo nickel. As we alluded to earlier, Fraser stated that he wanted to create a uniquely “American” coin, that no doubt came from the United States. These are subjects he chose in order to convey that message.

Some say that Fraser created the Native American on the obverse as a combination of many tribal chiefs, though there is some speculation surrounding the obverse’s model. However, the reverse side features a buffalo named Black Diamond. He was a resident bison of the Bronx Zoo in New York City.

The buffalo nickel was minted from 1913 to 1938, when it was replaced with the Jefferson nickel.

Features of the 1929 Buffalo Nickel

The 1929 buffalo nickel has some distinct features, making it easily distinguishable from other nickels. Let’s take a look at the features of the buffalo nickel that make it so special, including the design on the obverse and reverse, the metal it was composed of, the mint marks and their US locations, and their size and weight.

The Obverse of the 1929 Buffalo Nickel 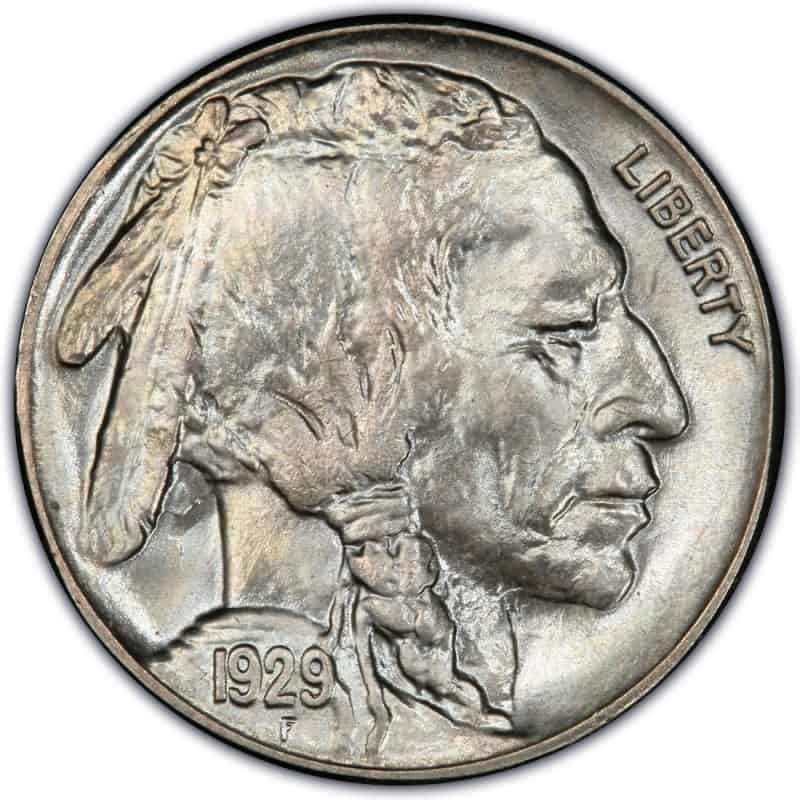 The most obvious feature is its design, so let’s look at the 1929 buffalo nickel’s obverse (front) side. On the obverse is the profile of a Native American chief wearing three feathers in his hair, facing right. It has quite a majestic and truly American air to it.

The Reverse of the 1929 Buffalo Nickel 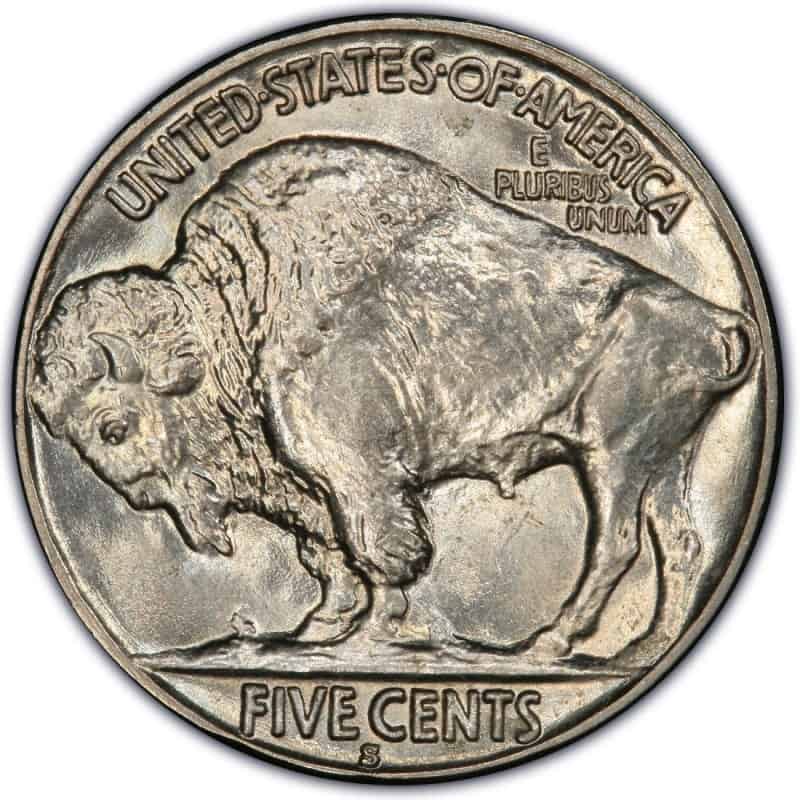 Other Features of the 1929 Buffalo Nickel

Now that we’ve discussed the obverse and reverse of the 1929 buffalo nickel, let’s move on to the other features of this absolutely beautiful US coin.

The coin is made from 75% copper and 25% nickel, which is the same metal composition of today’s nickels. Another name for this metal alloy is cupronickel.

The 1929 buffalo nickel was minted at three locations: Philadelphia (no mint mark), Denver (“D”) and San Francisco (“S”). As mentioned before, on the coin itself, you will find the mint mark (if any) on the reverse side underneath the words “FIVE CENTS” at the bottom of the coin.

The coin has a diameter of 21.2 millimeters and weighs 5 grams, which makes it the same weight as the modern US nickel. It has a thickness of 1.95 millimeters and has a plain rim, as opposed to fluted one.

Value of the 1929 Buffalo Nickel

The 1929 buffalo nickel is a valuable and rare coin, with its value depending on its condition and the US Mint location used to make the coin.

Now we will discuss the 1929 buffalo nickel value by its condition, categorized by its US Mint location. We’ll also look at how many coins were minted at each location. 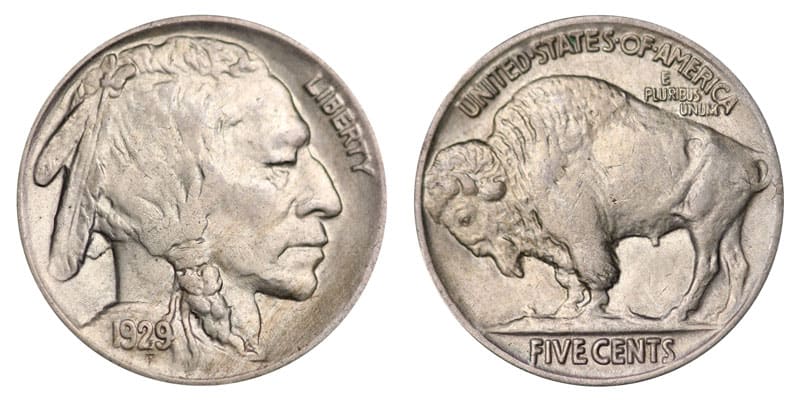 As per usual, Philadelphia, Pennsylvania, is the only US Mint location that did not have a mint mark on its 1929 buffalo nickels. This location had 36,446,000 coins produced.

In Good condition with wear and tear visible on both its obverse and reverse sides, this 1929 buffalo nickel can be worth about $1.42. Its value rises slightly when it is graded with Fine condition, at $2.81.

In Extremely Fine condition, the value of the 1929 buffalo nickels significantly jumps. They are worth about $13. Finally, in Uncirculated (or nearly perfect) condition, these coins are generally worth about $45 up to $83 or even more.

However, one 1929 buffalo nickel in nearly perfect condition did sell at auction in recent years for a whopping $25,000! So, it is possible to make quite a bit of money on these coins. 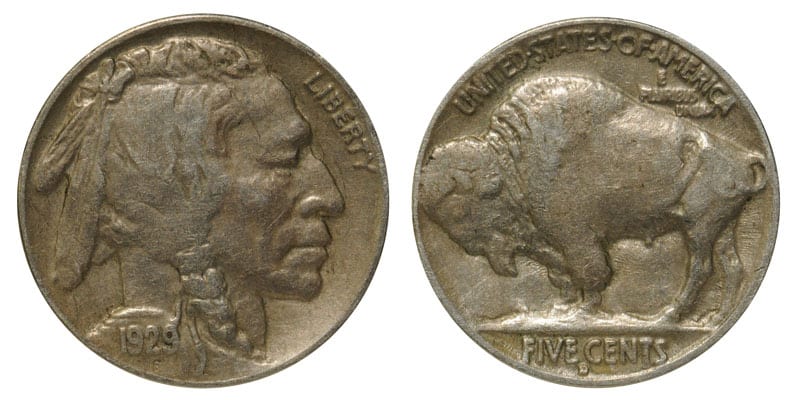 With a “D” mint mark, Denver, Colorado was another US Mint location for the 1929 buffalo nickel. It was responsible for producing 8,370,000, which is quite a bit less than what Philadelphia produced that year.

However, the basic coin value doesn’t change a whole lot from those minted at the Philadelphia branch. In Good condition, this 1929 “D” buffalo nickel is worth about $1.42, and goes for about $2.81 in Fine condition. The value can rise to about $36 in Extremely Fine condition, and lastly, it can reach between $51 and $67 or more when in Uncirculated condition.

Interestingly, one Uncirculated condition buffalo nickel from 1929 surfaced recently and sold at auction for a very impressive $15,000! Not bad for a five cent piece. 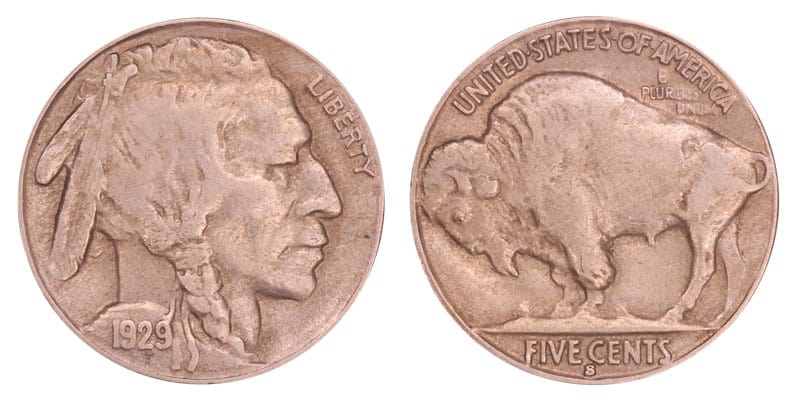 Finally, in Uncirculated condition, the 1929 buffalo nickel can be valued between $63 and $91, depending on exactly how pristine it is.

You may be wondering if this year has a Proof coin. A Proof coin is one that is made for collectors and is usually much more valuable than other coins in the same year.

Unfortunately, no Proof buffalo nickels were made in 1929. There was an extent of time where Proof coins were not made, so the 1929 buffalo nickel is one of many that was produced without a Proof counterpart.

If you have never heard the term “error coin” before, it is a coin that can be worth significantly more than the normal value due to an error that occurred during its manufacturing. 1929 buffalo nickels have been known to have some errors as they were minted, some rarer than others, making them quite valuable to collectors. However, no matter the error, the condition of the coin also plays into the price – any 1929 buffalo nickel will be worth more if the grade is very high.

Let’s explore a few 1929 buffalo nickel error coins that have sold in recent years at auction.

It was during the manufacturing process that this one particular 1929 buffalo nickel had a double clipped planchet error. What happened is that two pieces of the planchet were clipped off creating a very unique error.

This buffalo nickel was also in pretty good Uncirculated condition, so this coin sold for over $250. 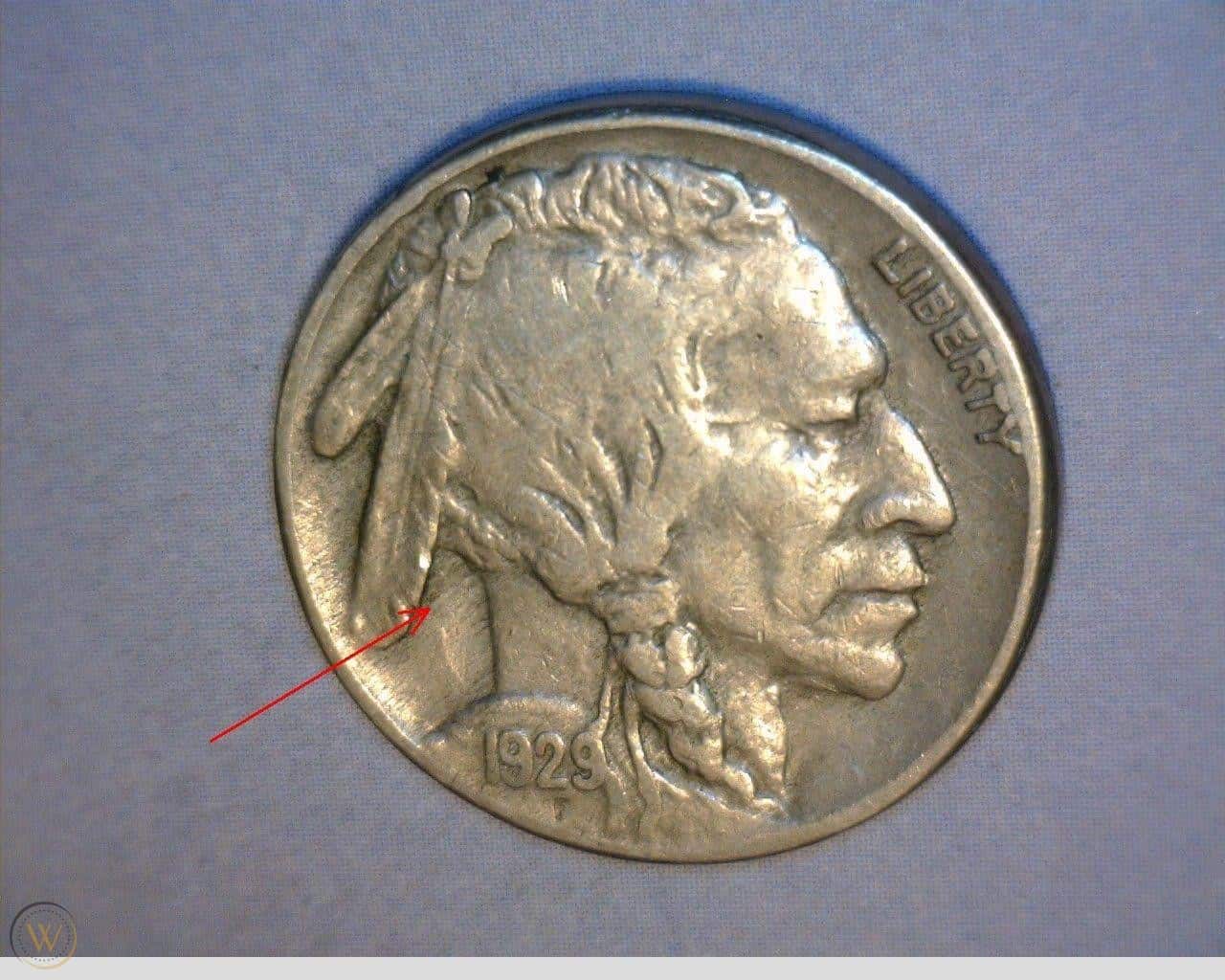 Another 1929 buffalo nickel error is the double die obverse, which means that the design on one side (the obverse side, in this case) of the coin was stamped twice. This error often results in a very cool effect as you can see double images overlapping each other on the coin.

This particular example had a doubling on the date, so a person would need a coin magnifying glass to see it. With a fairly worn condition, it sold for about $135 due at auction.

Compare that to another 1929 buffalo nickel that recently sold with this double die error on the date – this time, with a condition of nearly Uncirculated. It sold for $600, so that is a significant difference that a coin’s grade can make!

Now that you know more about the value of the 1929 buffalo nickel, let’s answer some common questions that people have regarding this coin.

Are All 1929 Buffalo Nickels Valuable?

It really depends on the condition of the coin and if it has any errors. Generally, all 1929 buffalo nickels are valuable, but the better condition and any errors can make them even more so.

You can find 1929 buffalo nickels at some coin shops, formal online auctions, and even antique stores, but they are a rare find sometimes. Another place is an online marketplace like Etsy or an online auction site like eBay. It is important to get an appraisal of your coin so you can determine its true value.

How Should I Clean a 1929 Buffalo Nickel Before Grading?

Actually, you should never clean a 1929 buffalo nickel before submitting it for grading. This is because cleaning can drastically decrease the value of the coin and make it difficult to accurately grade the coin. If for some reason, you feel it is absolutely necessary to clean your 1929 buffalo nickel, we highly recommend that you seek professional help and consult with a numismatist first.

The 1929 buffalo nickel is a beautiful and rare coin, with its worth depending on its condition and which US Mint location created the coin. If you are lucky enough to find one in your pocket change, you may just have won the jackpot! With such an interesting and historic background, this coin is certain to become a treasured addition to any collection.

Do you have a 1929 buffalo nickel in your possession? Let us know about it below in the comments!