In this blog post, we will discuss the history and features of the 1928 silver dollar, as well as the different values it can hold. We will also look at some common errors and varieties associated with this coin. So if you’re curious about the 1928 silver dollar value or just want to learn more about this historic coin, keep reading!

History of the 1928 Silver Dollar

The 1928 silver dollar has an interesting history. The coin was minted in 1928 and was known as one of the Peace dollars.

Coming off of World War I, the Peace dollar was a celebration of peace in the United States of America. With amazing speed, it was created – President Harding officially ended the first World War against Germany in November 1921, artists were asked to produce some peace coin ideas in early December, and then the first coins in the Peace dollar collection were minted right before Christmas.

It displays a beautiful Lady Liberty on the obverse and a majestic eagle overlooking the horizon on the reverse of the coin. It is said that sculptor Anthony de Francisci used his beloved wife as the inspiration of Lady Liberty’s angelic face.

Interestingly, there were no Peace dollar coins minted from 1929 to 1933, meaning that the 1928 silver dollar was the last Peace dollar to be minted for a few years. This was due to the Pittman Silver Purchase Act of 1918, which required the United States to sell silver to the United Kingdom. In the midst of the Great Depression, minting silver coins came to a stop when all of the bullion from the silver mines in the American West were bought and used.

The Peace dollar began again in 1934 when silver prices were at an all-time low, and the United States was able to purchase more again. But for a while, 1928 was the last amount of that silver mined from American soil.

Features of the 1928 Silver Dollar

Now that you know a bit about the history of the 1928 silver dollar, let’s take a look at its features.

The Obverse of the 1928 Silver Dollar 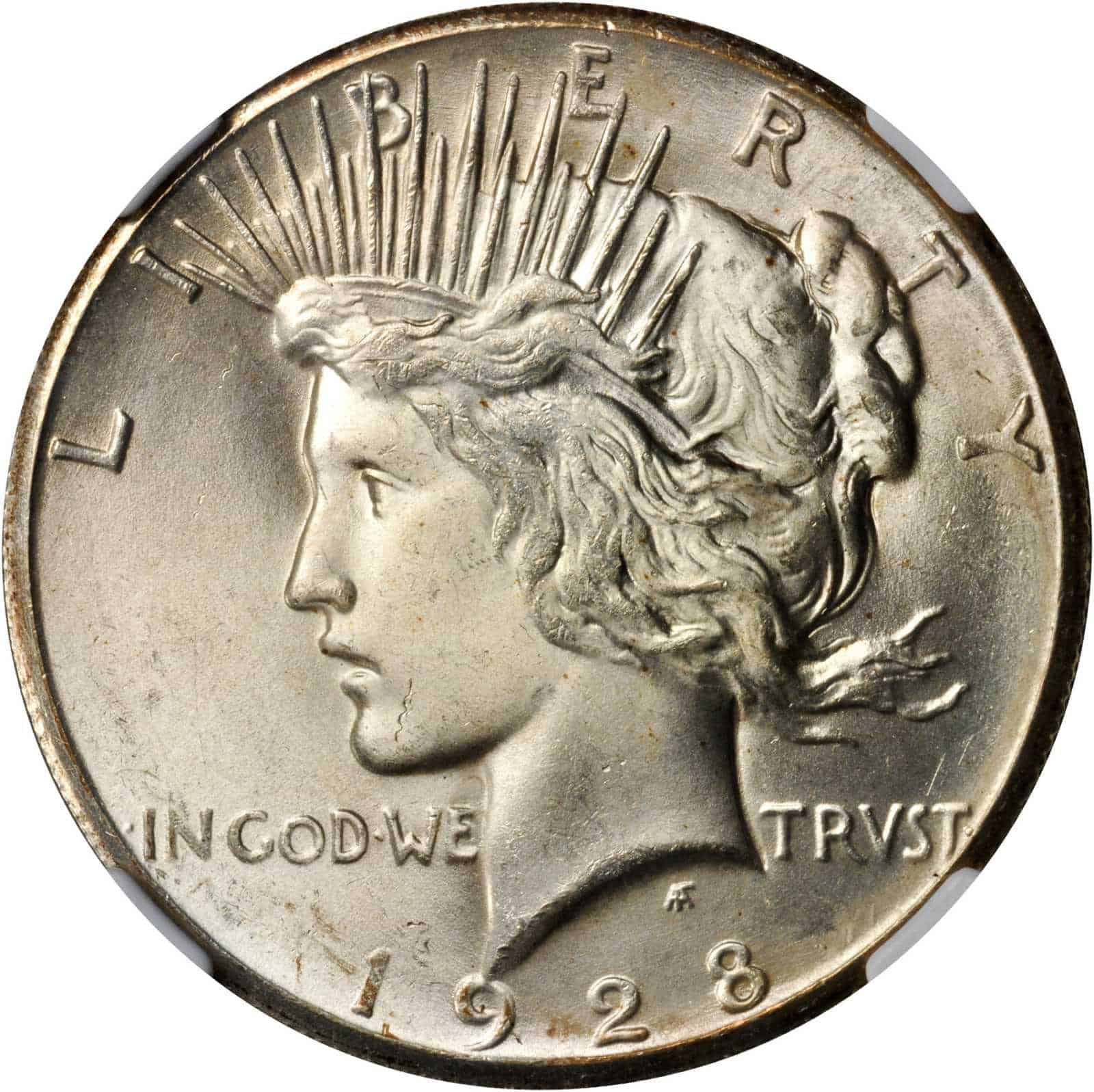 The obverse side of a 1928 silver dollar features Lady Liberty with her hair flowing in the wind. She is wearing her stately and strikingly beautiful tiara with an inscription that reads “LIBERTY” along the top. Beneath her chin is the phrase “IN GOD WE TRUST.”

Below Lady Liberty, you will find the date, 1928, which is centered at the bottom of the coin.

Unlike the Morgan dollar, there is no reeded edge. A smooth edge gives this coin a fresh, updated appearance – serene and unadorned, with a simple beauty that echoes the American feeling of peace.

The Reverse of the 1928 Silver Dollar 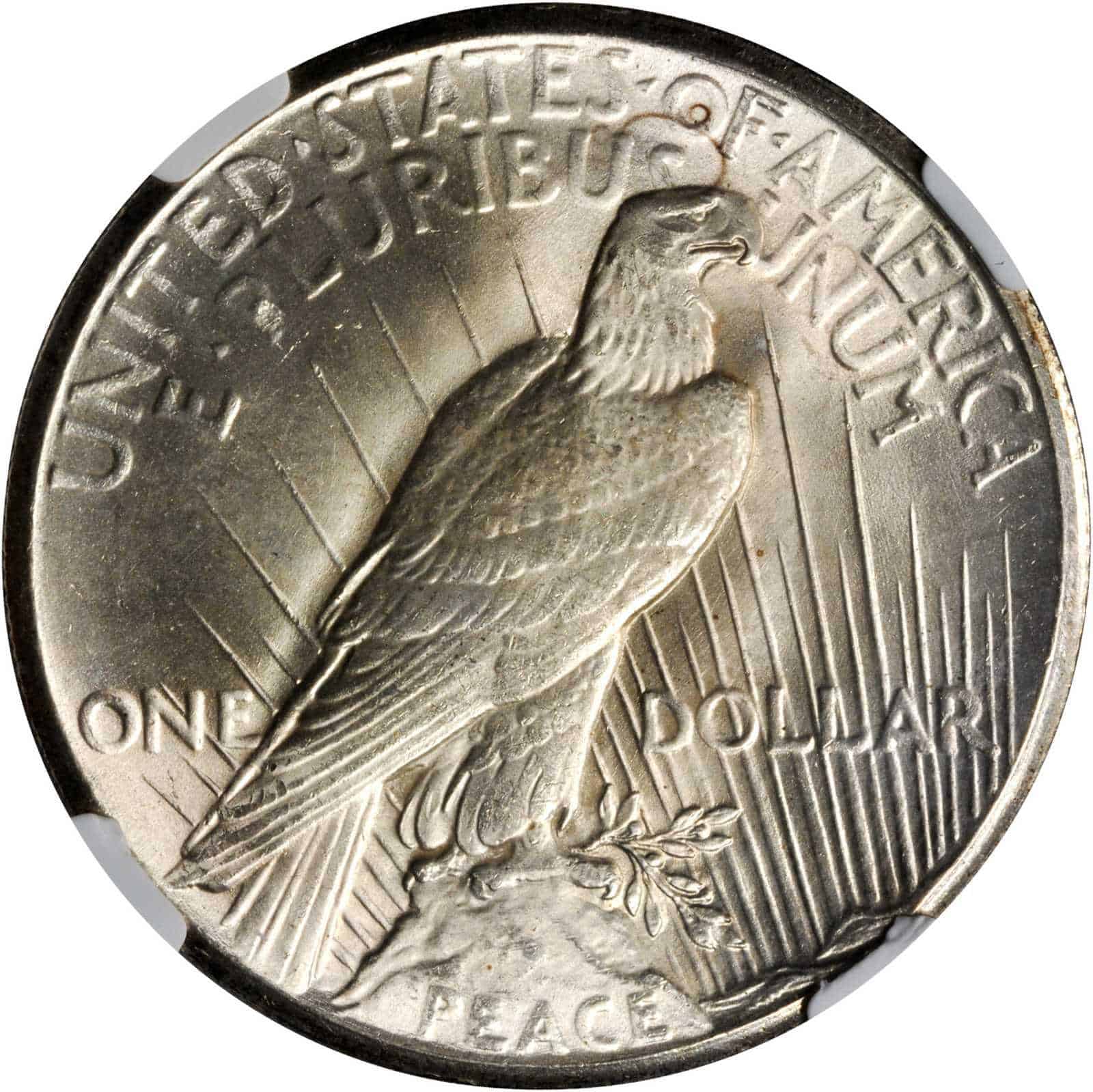 The reverse side depicts a bald eagle perched atop a mountain peak. He is clutching an olive branch in his talons, and he is surrounded by a brilliant sunburst that is coming up over the horizon on the lower right side of the coin.

The words “UNITED STATES OF AMERICA” are arcing across the top rim of the coin. Directly below it is the phrase “E PLURIBUS UNUM,” which is Latin for  “out of many, one.”

At the bottom of the reverse side is the denomination: “ONE DOLLAR.” And lastly, etched into the mountaintop at the bottom center of the coin is the word “PEACE.”

Other Features of the 1928 Silver Dollar

Now let’s take a look at some of the other features of the 1928 silver dollar, including the metal composition, the mint mark locations, and the size and weight.

The mint mark is located at the bottom left of the coin on the reverse, directly below the “O” in the word “ONE,” which is part of the phrase “ONE DOLLAR.” If there is one, it will be an “S”, but there will not be one if the coin was minted in Philadelphia.

Value of the 1928 Silver Dollar

There were only two US Mint locations for the 1928 silver dollar. Let’s look at them in more detail below.

The 1928 “S” silver dollar is a sought-after coin, popular among collectors. Around 1,632,000 of these were minted in San Francisco that year, which isn’t altogether that many.

No matter the condition, you can fetch a good price for this coin. In Good condition, this coin is worth approximately $320, while in Fine condition, it can be worth up to $377. An Extremely Fine version can have a value of up to $433.

If the coin is Uncirculated, its value can reach values of $545 to over $5,000 or more, depending on how pristine!

You may be wondering about the value of the 1928 Proof silver dollar. Proof coins are coins that are struck from specially prepared dies, resulting in an especially well-made, mirror-like, and detailed coin. They are meant for collectors.

Most years and denominations of US coinage have Proof coins – oddly, the 1928 silver dollar does not.

Overall, the 1928 silver dollar has considerable historical and monetary value for any collector. The exact value of each individual coin depends on its condition and mint mark, however – and also, if there are any errors detected.

Error coins have issues from when they were minted – these issues could range a whole gamut of situations, and the worse the error, the more the coin might be worth.

Those looking to purchase or sell a 1928 silver dollar should do their research to ensure they get the best deal possible. Since these coins can be quite valuable and sought after by collectors, it’s best to consult a professional numismatist if you suspect you might have a 1928 silver dollar in your collection!

A lamination error is when the metal plating of the coin has not been properly adhered to, resulting in flakes or patches missing from the surface. An “Extremely Fine” condition silver dollar from 1928 had one such error – a minor lamination error down by the date – and it sold at auction for around $645! Not too shabby for a tiny error that the untrained eye might miss seeing entirely.

Another coin with a similar error (on Lady Liberty’s face) but with a poorer condition sold for over $250 at auction. 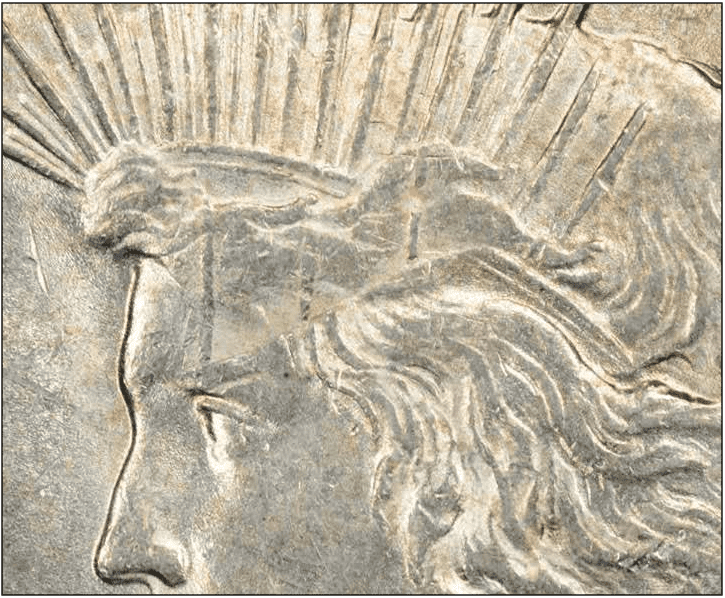 A strike through error is when a foreign object falls onto the die and then gets struck into the coin.

This can cause some pretty unique results, as it did with the above 1928 silver dollar. The obverse side of the coin had a visible strike or nick across the points on Lady Liberty’s crown. Despite that error, the coin was graded as “Extremely Fine,” and so it sold at auction for over $900! Not bad at all.

Now that you know the 1928 silver dollar’s history, features and value, let’s take a step back and look at some of your most frequently asked questions about this beautiful coin.

Why Are There So Few of These Coins Around Today? (Especially in Good Condition)

The 1928 silver dollar was minted in relatively low numbers compared to other years and denominations of US coinage. That makes it rare, and thus harder to find in good condition today.

Also, many of these coins were stored in “1000 coin” bags, as opposed to the modern day coin rolls, causing them to be damaged more quickly. Not only that but many were also damaged counting machines.

Were the 1928 Silver Dollars Very Popular Back Then?

Interestingly, at the time of their release, not many people were interested in collecting them. They weren’t seen as particularly collectible, which is why so many of them entered circulation and weren’t taken care of – though, of course, that interest has changed today! So, if you find an Uncirculated condition silver dollar from 1928, you have a true treasure on your hands!

What Are Some Other Valuable Peace Dollar Dates?

In addition to the 1928 silver dollar (Peace dollar), the 1925 “S” coin is very rare and hard to find in very high condition. The 1921 Proof (made in Philadelphia) is also highly sought after, and so are the Proof coins from 1922, to name a few of the more desirable dates to collectors.

Do Any 1928 Silver Dollars Have Errors?

Yes! As we discussed above, lamination and strike-through errors are known to exist in 1928 silver dollars. There are likely more out there too, just waiting to be discovered (by you)! These can add significantly to the value of the coin, so it’s always worth a close inspection if you think you might have one.

It depends on which mint mark your coin has (if any). 1928 silver dollar coins with no mint mark are much rarer than those with an “S”. Overall, though, 1928 silver dollars are pretty rare and finding one in great condition is a treasure you should cherish, should you be so lucky to find it.

There you have it! Everything you needed to know about the 1928 silver dollar coin, also known as the Peace dollar.

No matter your budget, there’s sure to be a 1928 silver dollar that’s perfect for you. Good luck!

Do you have a 1928 silver dollar already? Have you had it appraised yet? Tell us your experience in the comments below! We’d love to hear all about it.