The Buffalo nickel (Indian Head nickel) series is a vital part of US coinage history, partly thanks to its design honoring Native Americans. The US Mint issued these coins from 1913 to 1938 and replaced them with the Jefferson nickel the following year.

Many collectors seek these coins since they are aesthetically pleasing, affordable, and have historical and numismatic value. However, the condition is the most crucial factor determining the 1928 Buffalo nickel value. The more preserved your coin is, the more it is worth. Let’s see.

History of the 1928 Buffalo Nickel

The US Mint made the Buffalo nickel as a part of the redesigning coin process. President Theodore Roosevelt wanted American coins to have a more artistic and aesthetic appearance, but Federal law stipulated that each piece should circulate for at least 25 years.

The project of coinage replacement started in 1904, and the first renewed coins were 10-dollar and 25-dollar American Gold Eagle. Finally, the US Mint decided to replace the Liberty Head nickel, which had 26 dates until then.

American sculptor James Earle Fraser made a new nickel design in 1912. Initially, he intended it for a one-penny coin, but the Mint director liked the idea and decided to put the bison on five cents.

Interestingly, the Buffalo nickel had two introductions. Before its official release into circulation, President Taft received 40 nickels and distributed them to Indian chiefs.

It happened at the groundbreaking ceremony for the National American Indian Memorial in Staten Island, New York. Unfortunately, this memorial was never finished, and you can’t find any traces of its existence nowadays.

Officially, the first 1913 nickels went into circulation a month later, in March. Even though the new nickel design was rich in detail and met all required criteria, it also showed some flaws.

It quickly became apparent that the coin quality was unsatisfactory and that wear and scratches appeared faster on the surface than on Liberty Head coins. The Chief Engraver required revision, but these coins never became better.

The US Mint replaced it with the Jefferson nickel in 1938. The new coin type had the same composition but was much more reliable and quality.

Three mints produced the Buffalo nickel in 1928, Denver, Philadelphia, and San Francisco. All these coins look exactly the same except for the mint mark or lack of it.

The obverse of the 1928 Buffalo nickel 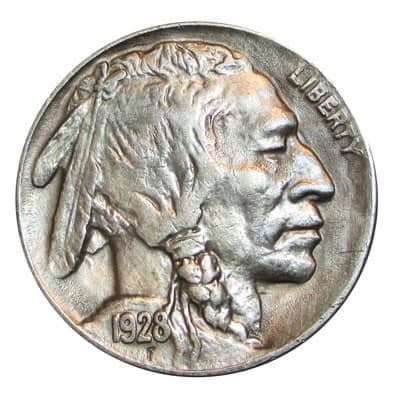 Many Americans refer to Buffalo nickel as an Indian Head nickel because of the obverse design. Fraser wanted to pay tribute to American history with this coin, so he added a portrait of a Native American chief on that coin side.

For decades, there have been numerous speculations about the chief’s identity, but no official confirmation exists. Instead, it is believed that the image is a combination of several portraits created based on different chiefs.

The chief’s hair is traditionally braided and decorated with three bird feathers. You can also see the issue DATE under the bust, while the word LIBERTY is on the right, engraved along the coin edge.

When you look closely, it is possible too see the F letter engraved just below the date, representing the designer’s initial.

The reverse of the 1928 Buffalo nickel 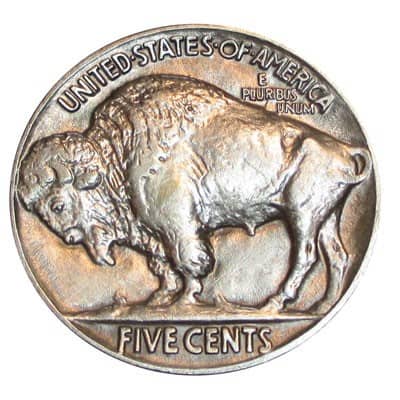 Interestingly, Fraser paid more attention to the reverse design. The central motif is the American bison. Its figure is detailed, with noticeable fine lines on the fur, tail, and head.

The designer declared that the model was Black Diamond, a buffalo living in the ZOO. However, many rejected this claim because it seemed that the animal didn’t resemble the one on the coin.

Finally, you can see the FIVE CENT under the bison legs at the coin bottom. When the nickel comes from San Francisco or Denver, the corresponding mint mark is below the denomination.

Other features of the 1928 Buffalo nickel

Even though the 1928 Indian Head nickel face value is five cents, its price on the coin market is often slightly higher. You can expect this coin to be rare, particularly in an uncirculated condition.

The three US mints made 36,783,000 Buffalo nickels in 1928. The entire mintage went into circulation, causing most to be worn out or destroyed over time. That makes the few remaining pieces even more valuable. 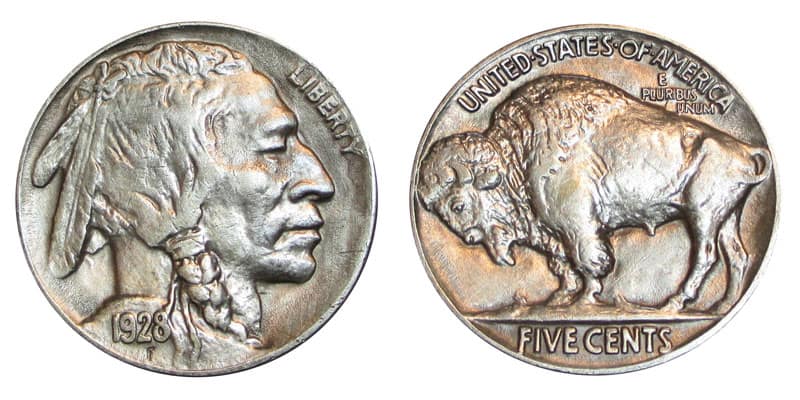 The Philadelphia mint issued the highest percentage of the 1928 nickel mintage, exactly 23,411,000. Most were low-quality, and only a few exist in the mint state nowadays.

On average, you can find those in fine condition for around $3, while those in an AU grade are worth over $25. On the other hand, Indian Head nickels in the mint state are scarce and can bring hundreds or even thousands of dollars. 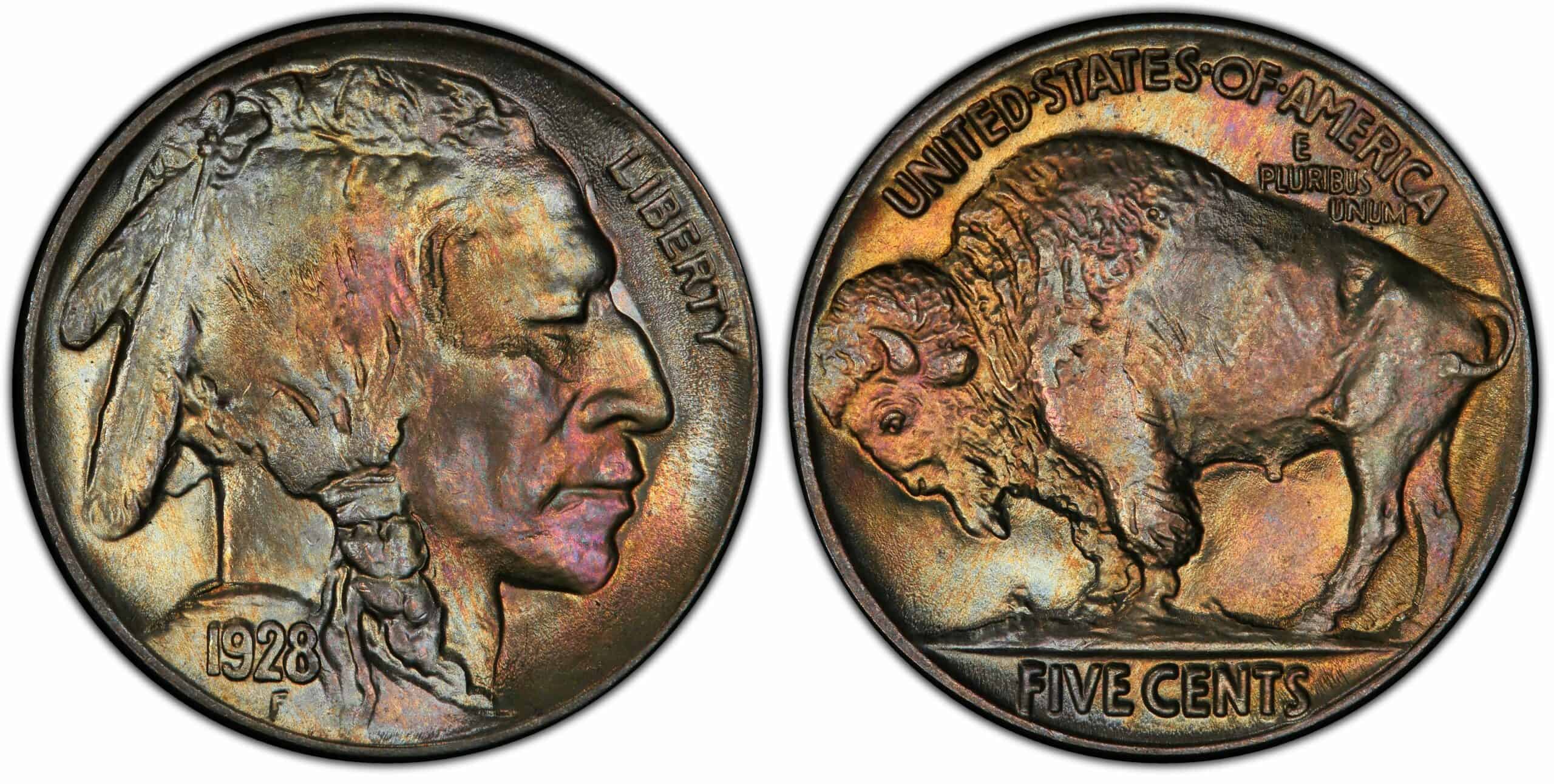 Occasionally, one of the US mints issued proof coins besides these from regular strikes meant for circulation. These coins had a finer design and a more delicate finish with an intense luster than the rest of the mintage. The mints produced them primarily for collectors.

The Denver mint issued only 6,436,000 Buffalo nickels with the D mint mark in 1928. It was only about a quarter of the Philadelphia mint production, making these coins slightly more valuable. 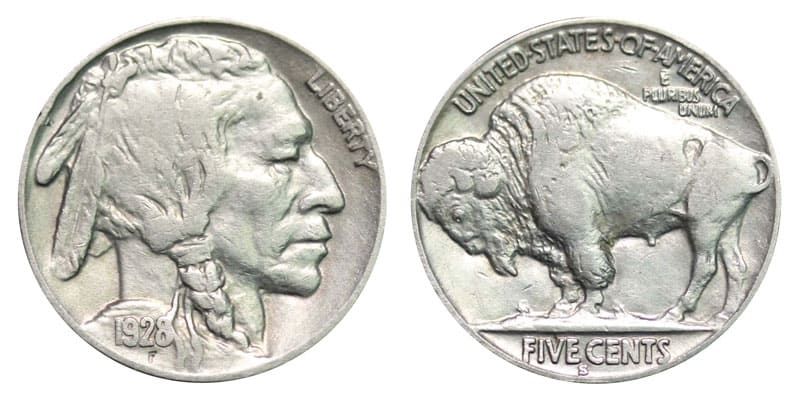 The San Francisco mint produced the most valuable 1928 Indian Head nickels on the coin market. Interestingly, the production was close to the Denver mint, with 6,936,000 struck coins.

However, finding the 1928 S Buffalo nickel in decent condition is challenging, especially when seeking a piece in the mint state. The entire mintage was used in transactions, and most coins were long gone or worn out beyond recognition.

The entire Indian Head nickel collection was defective from the very first coin, and the 1928 date is no exception. Therefore, the US Mint replaced them as soon as the mandatory 25 years had passed.

You can find numerous error specimens, including double strikes, die clashes, and off-center coins. Unfortunately, most such coins are impossible to find nowadays, making them highly collectible and costly. The most desirable errors with the 1928 date are:

The most popular Buffalo nickel variety is the Two Feathers coin. Several dates came with this variety, including those minted in 1928.

It occurs due to extreme or possibly hasty die polishing over the third feather. A popular theory is that this variety happened as an attempt to correct a previous die clash or planchet error.

This error type comes only with the S mint mark, and many collectors seek it since it is scarce and valuable. At the moment, there is only one uncertified 1928 S Two Feathers Buffalo nickel available, and you can buy it for $225.

There is another coin error specific to the Indian Head nickel series. It occurs on the reverse in the form of a shortened buffalo horn. It probably happened due to an irregular off-center strike. You can find these pieces on eBay for approximately $10.

The lamination error nickel is one more collectible coin that appeared in 1928. It occurs when the coin has surface cracks and flakes, resulting in vertical lines across the design. Such a specimen is typically worth about $35.

Some experts believe the cause for the lamination error is contaminants in the alloy, leading to the metal separation on the surface. Even though several 1928 nickels with this error appeared over the years, all had the D mint mark.

FAQ about the 1928 Buffalo Nickel

What makes a 1928 Buffalo nickel rare?

The primary reason 1928 Buffalo nickels are rare is their low quality. Many were broken and worn out over time because of heavy circulation. The remaining pieces are often damaged, and finding a well-preserved nickel is quite challenging.

Which 1928 Buffalo nickel is worth a lot of money?

How much is the 1928 No Mint Mark Buffalo nickel worth?

All 1928 Buffalo nickels issued in Philadelphia cost only around $2 when in very good condition. However, even such a low price exceeds their face value. The most expensive is the 1928 MS 67 Buffalo nickel that was sold for $11,500 in 2004 at an auction.

Are there any rare 1928 Buffalo nickels?

Well-preserved 1928 S Buffalo nickels are hard to find, but the rarest coins from the series are those with a Two Feathers error. The one in an AU grade costs about $1,000, so you can assume that the one in an MS grade costs much more for sure. The only problem is to wait for one to appear on the market.