The 5 cent piece minted back in 1927 was one of a series known as “Buffalo nickels”. If you’ve found one of these coins, you might be wondering whether it’s valuable. That’s what we’re here to find out!

We’re going to look at the 1927 Buffalo nickel value. We’ll find out what features distinguish a standard coin from something more unusual. And we’ll learn more about this coin’s history and design.

History of the 1927 Buffalo Nickel

The series of coins known as Buffalo nickels were struck between 1913 and 1938. They get their nickname from the image of a buffalo – or more precisely, an American bison – on the reverse. The obverse depicts the face of a Native American man in profile.

The coins succeeded the Liberty head nickels. The idea for them seems to have come from Eames MacVeagh, son of the Treasury Secretary, Franklin MacVeagh. He wrote to his father suggesting that the redesign of the nickel would be a pleasing memento of his time in office.

The new coins were designed by James Earle Fraser. But although their artistry was admired, there were practical difficulties with the design.

The Hobbs Manufacturing Company made devices that detected counterfeit coins in nickel-operated machines. They were concerned that it would not be possible to accurately distinguish a counterfeit (known as a “slug”) from the real thing.

The design was adjusted, but the company continued to express concerns. In the end, the Treasury decided to press on with production regardless.

But this wasn’t the only issue with the new coins. The designs didn’t strike clearly and wore badly – the date, in particular, suffered during circulation.

It was probably for that reason that the last Buffalo nickels were struck in 1938. That year marked 25 years since the design was first used. It was the minimum period after which it could be replaced without seeking the approval of Congress.

The 1927 mintage was struck in Philadelphia, San Francisco and Denver. A handful of special strike coins were made in Philadelphia that year too. Just over 47 million nickels were produced in all, the vast majority of which came out of the Philadelphia facility.

Features of the 1927 Buffalo Nickel

The Obverse of the 1927 Buffalo Nickel The obverse of the 1927 penny has the bust of a Native American man. He is shown in profile, facing to the right.

The portrait was the work of James Earle Fraser. And rather than depicting one individual, it’s the composite of several different Native Americans.

Fraser gave a number of different accounts of the people he’d used for his models, not all of which were consistent. But he was clear that the face was not a single person, but what he called a “type”.

Nevertheless, various people claimed to be the model for the nickel. Amongst them were John Big Tree, a Seneca, and Two Guns White Calf, son of the tribal chief of the Blackfoots.

The obverse design was the subject of some of the complaints from the Hobbs company. They felt that the cheekbone of the Native American was too high for their anti-fraud devices.

The portrait takes up most of the coin surface. Along the right hand edge is the word “Liberty”. The date appears on the shoulder, and beneath it is a small “F” for Fraser.

The Reverse of the 1927 Buffalo Nickel 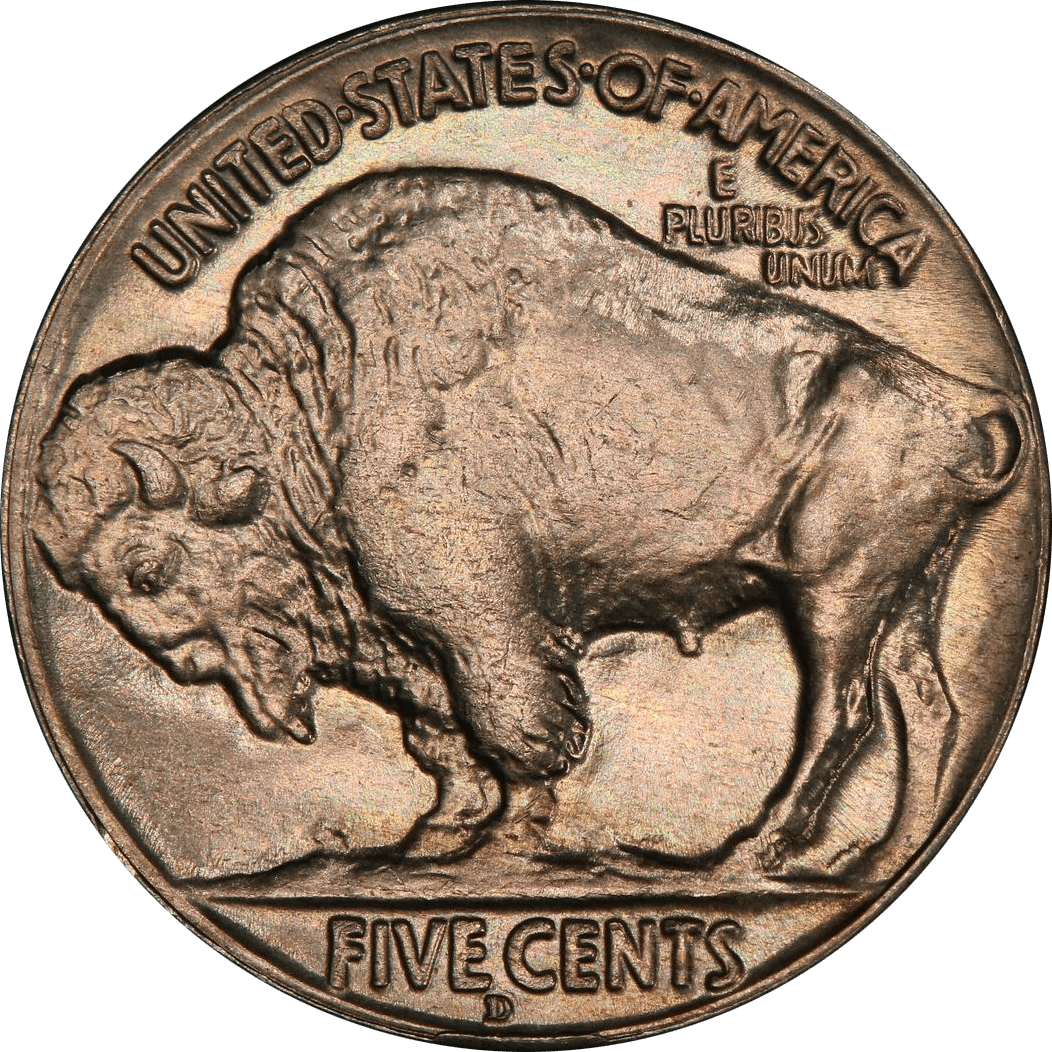 The reverse features a design of an American bison, colloquially known as a buffalo. But just as with the Native American on the obverse, the identity of the animal was the subject of some debate.

From there he was sold and sadly slaughtered. His head was preserved and has from time to time been displayed at coin exhibitions. But his horns are positioned quite differently from the animal on the coin.

An alternative candidate was another American bison called Bronx, the leader of the herd at Bronx Zoo.

Whatever the identify of the bison, he stands on the reverse of the nickel, head lowered. The country name curves along the top of the coin edge. Beneath it is the Latin motto “E pluribus unum”, meaning “From the many, one”. It’s a reference to the creation of the USA from the many states.

The same design was used for a commemorative silver dollar in 2001, and adapted slightly for a gold coin in 2006.

Other Features of the 1927 Buffalo Nickel

The coins measure 21.2 millimeters in diameter and weigh exactly 5 grams. The edge is plain.

And although the coin is called a “nickel”, it’s actually made mostly of copper. The composition is three quarters copper and one quarter nickel.

It’s known by a number of different names. In addition to “Buffalo nickel”, you may hear it referred to as the “Indian head nickel”.

This YouTube video from Couch Collectibles looks at some of the rarest and most valuable 1927 Buffalo nickels in existence. 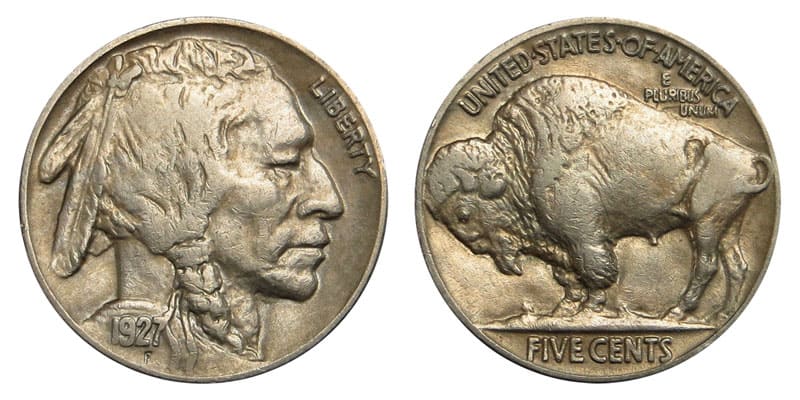 Over 47 million Buffalo nickels in total were struck in 1927. And almost all of them – nearly 38 million – came out of the Mint facility in Philadelphia.

You’ll know if your 1927 Buffalo nickel is one of them because it won’t have a mint mark. If there’s no letter underneath the denomination on the reverse, it will have come from Philadelphia.

The 1927 Philadelphia Buffalo nickel is one of the easier to find mintages from the 1920s. And despite the problems with the design in other issues, it’s usually quite sharply struck with attractive luster.

A circulated example in XF45 (extremely fine) condition is valued at $20 by the independent coin graders the PCGS. Prices are significantly higher for mint state coins. An example graded MS60 is valued at $55.

Far fewer nickels were struck in Denver than in Philadelphia in 1927. Just under 6 million coins were produced there – around 12 per cent of the total for the year. As a result, a Denver mint mark will add a premium to values at pretty much every grade.

It’s fairly easy to find 1927 Denver Buffalo nickels in lower grades. A coin graded F15 (fine) is worth about $25. But at VF20 (very fine) and above, it’s harder to find. It becomes rarer again in mint condition up to MS64.

And if you want a gem quality coin, they can be difficult to find. The 1927 D is among the rarest Buffalo nickels at MS65 and above.

All this is reflected in values. The PCGS puts the value of an extremely fine (XF45) coin at $125. That’s good money for a circulated coin.

There are only two coins graded higher than that, both graded MS66+. And they’re valued at $55,000 apiece. 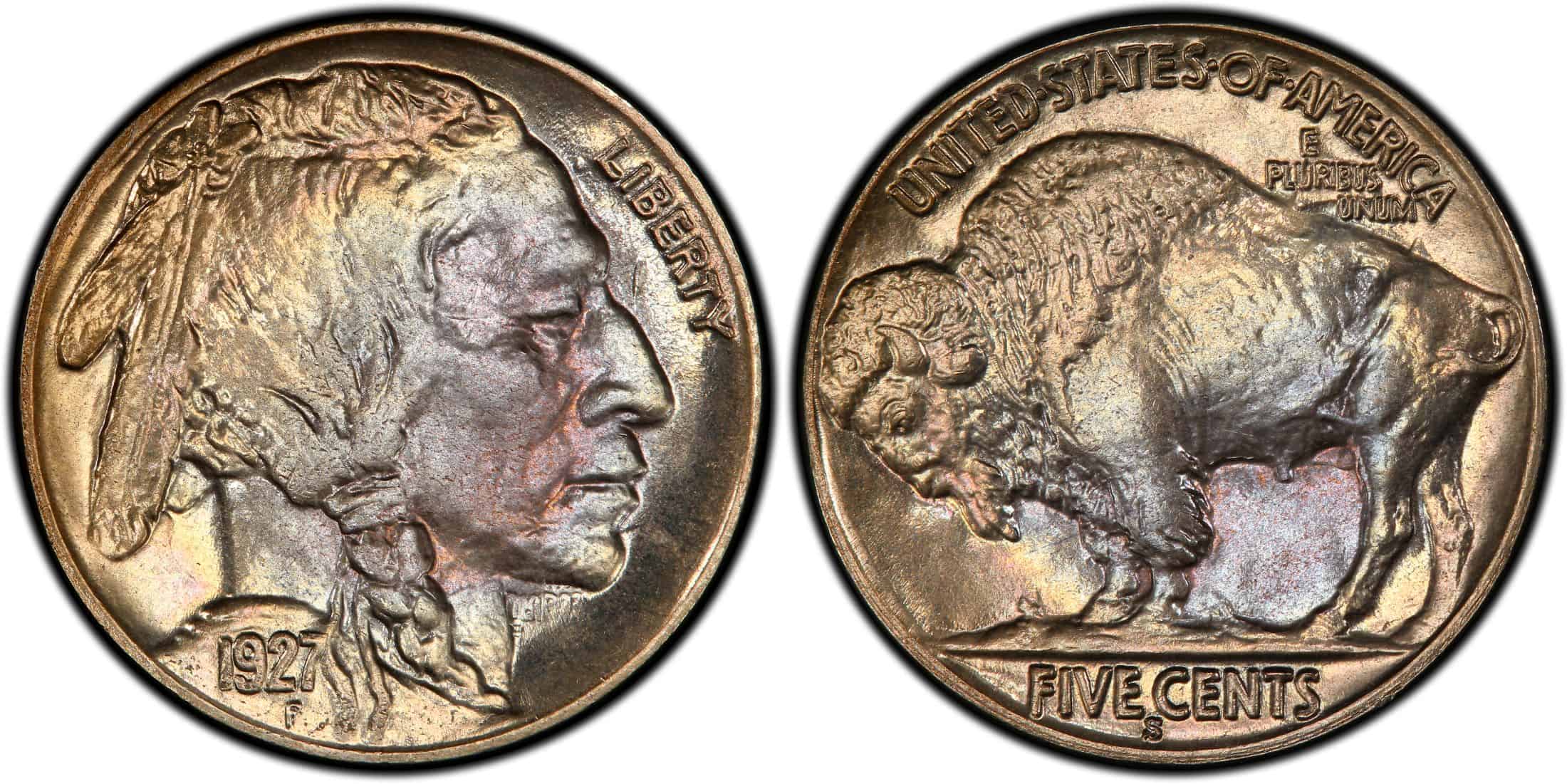 Rarer even than the 1927 Denver mint mark is the 1927 San Francisco Buffalo nickel. Only 3.4 million of them were struck.

Better quality circulated coins can have three figure values. A coin graded extremely fine (XF45) will be worth around $175. An almost uncirculated (AU55) example is valued at $500.

The finest known coin is a single example graded MS66+ by the NGC. It was on sale at the time of writing. And the price tag for this fine specimen was a cool $200,000. 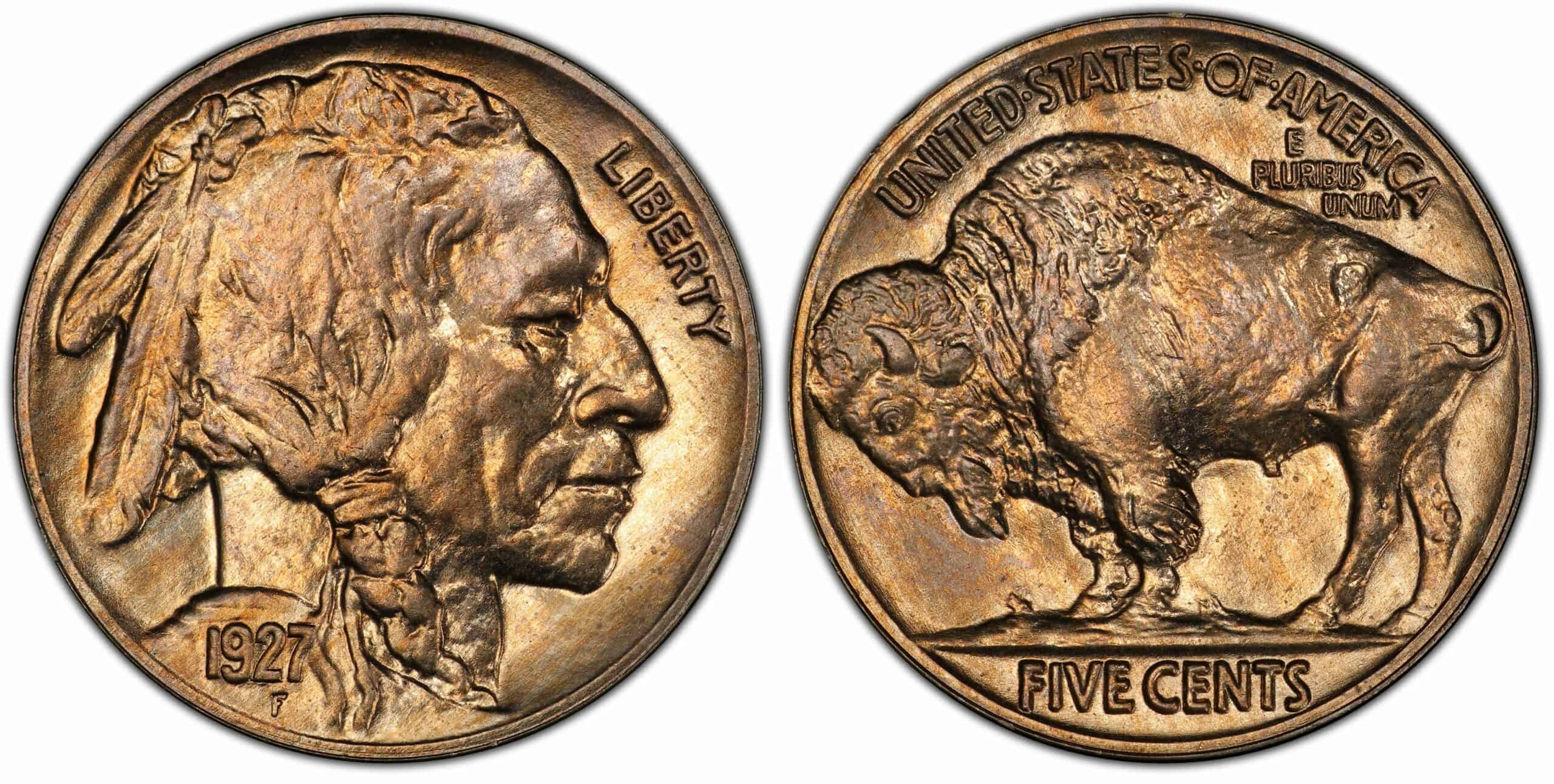 In addition to the coins produced for circulation, four 1927 Buffalo nickels of proof-like quality have come to light. They were struck in Philadelphia, but their history is unclear.

There is no documentary record of the Philadelphia mint facility (or any others) striking proof nickels in 1927. But these coins have an unusual texture and satin-like finish. They are thought to have been struck as experimental pieces, perhaps with new chromium-plated dies.

They have an exceptionally detailed finish. One of the four examples is graded SP65 by the PCGS. It was last sold at Heritage Auctions in 2012, making over $41,000. Today, the PCGS puts its value at $65,000.

The other three known examples are all graded SP66. And the PCGS values them at $87,500 each.

A double die error occurs during the creation of the die which presses the design into the coins. That has to be struck repeatedly in order to capture every detail of the design. But if it moves during that process, a double image will result. That’s then transferred to the coins struck by the die.

The 1927 Buffalo nickels struck in San Francisco include examples with such doubling. The doubled image can be seen on the obverse. (This type of error is known as a “double die obverse”, and is often abbreviated to “DDO” in coin descriptions.)

The finest examples to have come to light are graded AU58 (the AU stands for “about uncirculated”). The PCGS has graded four coins at this level. The most recent sale took place in 2019, and that coin fetched $840.

Sometimes the metal strip doesn’t advance far enough after a coin is struck. That means that for the next coin, the die is positioned partly over the hole in the metal left by the previous coin. The result is a coin with a curved section missing from the edge.

One 1927 Buffalo nickel struck in Philadelphia had this error. The clip had removed about 6% of the planchet. But the coin was otherwise excellent quality, graded MS64 by the PCGS. It fetched over $200 when it was sold at auction.

This error resulted from over-zealous die polishing removing the third feather from the headdress of the Native American on the obverse of the coin. You should see the bottom of the feather sticking out next to his neck. But in these error coins, it’s disappeared.

That happened to some Buffalo nickels minted in a number of different years. And these coins are very collectable.

This YouTube video from Couch Collectibles looks at a range of different errors amongst 1927 Buffalo nickels.

What makes a 1927 Buffalo nickel valuable?

Buffalo nickels are collectable coins. The better the quality, the rarer the coin and the more valuable it will be. Mint state coins – those that haven’t been circulated – are amongst the most valuable.

But unusual varieties or error coins in lower grades can be valuable too. The “Two Feathers” variety, struck in San Francisco, is one worth looking out for.

Values vary widely. A lower grade coin can be worth only a few dollars. Mint state coins start at $55 for a 1927 Philadelphia nickel graded MS60. At the other end of the scale, a San Francisco nickel graded MS66 is valued at $85,000.