When you’re collecting coins, older ones often exhibit more value. So while the Lincoln Cent was minted from 1909 to date, coins from the 20s are now a century old so they’re worth way more than contemporary coins. That’s why we’re looking into the 1926 Wheat Penny Value.

History of the 1926 Wheat Penny

These days, about 1 in 8 American residents was born outside the US, and some native-born folk are quite uneasy about that stat. But immigrants often bring a lot into our economy, and, ironically, the coin collection space provides the ultimate proof. Back in the early days of our nation, artists from other countries played a key role in designing the currency we use today.

Examples include the French-Irish Dublin-born Augustus Saint-Gaudens, who designed the Gold Eagle ($10) and Double-Eagle ($20). Then there was German-born Felix Oscar Schlag, who did the Jefferson Nickel, or even the British-born George Thomas Morgan of the famous Morgan Dollar. But right now, let’s focus on infamous Russian-born Victor David Brenner.

He started (and ended) life as Avigdor ben Gershon, the official name that appears on his tombstone. He was born on 12th June 1871 in a large Lithuanian city called Šiauliai. But his Jewish family escaped Russia in 1890, and like many emigrants arriving in New York, he anglicized his name to Victor David Brenner. His father taught him sealing and engraving.

Brenner learned French and English, attending night school at the Cooper Union for the Advancement of Science and Art in New York, and later the Académie Julian. There, he learned sculpture and medal work respectively. But it was while he was apprenticing for Augustus Saint-Gaudens that he got his shot at designing the career-launching Lincoln Cent.

Victor Brenner and the Lincoln Cent

Saint-Gaudens had been tapped by President Theodore Roosevelt to beautify American coins and give them artistic merit. But he died of cancer before completing his commission, and Brenner – along with other Saint-Gaudens assistants like James Earle Fraser – stepped in to complete the task. Fraser made the Buffalo Head Nickel while Brenner did the Lincoln Cent.

For the record, Fraser trained another immigrant, Italian-born Antonio de Francisci, who later designed the Peace Dollar. So it seems these naturalized sculptors played a huge and extremely direct role in the economy, and specifically, in many circulating coins that we still use today. Food for thought! But let’s get back to Brenner. In 1908, Roosevelt posed for him.

It seems they got along, and the President asked the US Mint to hire him. For the obverse, Brenner used his prior design from a 1907 desk plaque for Gorham Manufacturing. For the reverse, he offered a sketch based on the tree branches from French silver coins circulating at the time. He also drew a Lincoln half-dollar design based on the French Standing Liberty.

Mint Director Frank A. Leach requested a more … American coin … and Brenner responded by changing the tree branch to a pair of durum wheat ears. He also added E Pluribus Unum, One Cent, and United States of America, following the Director’s instructions. President Roosevelt liked this coin but asked that United be spelled with a U instead of Brenner’s V.

The VDB vs Charles Barber Controversy

Brenner also signed his full surname on the front of the coin, which Leach objected to.  He agreed to move his VDB insignia to the back. However, this didn’t solve the issue. Before the President brought in professional sculptors, coins were designed by in-house mint engravers including Charles E. Barber. His ‘less attractive’ earlier coins were signed with a B for Barber.

Barber resisted these new coins, which were pretty but tough to strike. He preferred the prior, more practical coins that he had personally designed, but he was overruled. When Brenner’s Lincoln Cents were eventually coined, they had a large VDB on the back. Certain officials and members of the public objected to this. He was asked to use a smaller B instead.

But Barber didn’t like this idea since the cents – which he detested – might be mistaken for his work. His coins were stamped B as well! Also, the replacement would take two weeks!! Option Two was to remove VDB, which upset Brenner, but would only take 3 days. So the VDB was wiped off and didn’t reappear until 1918, one year after Charles Barber’s death.

Still, Barber wanted more changes. He asked for Lincoln’s portrait to be centered for easier minting. Leach agreed, and when Brenner wouldn’t do it, Barber did it himself, leaving a lot of blank space at the top of the coin. To balance the coin’s appearance, Leach and Barber added In God We Trust above Lincoln’s head. President Taft approved this newer version.

Features of the 1926 Wheat Penny

As we look into the features of the 1926 Wheat Penny, let’s review a little jargon:

Now let’s discuss the salient characteristics of the 1926 Wheat Cent.

The Obverse of the 1926 Wheat Penny 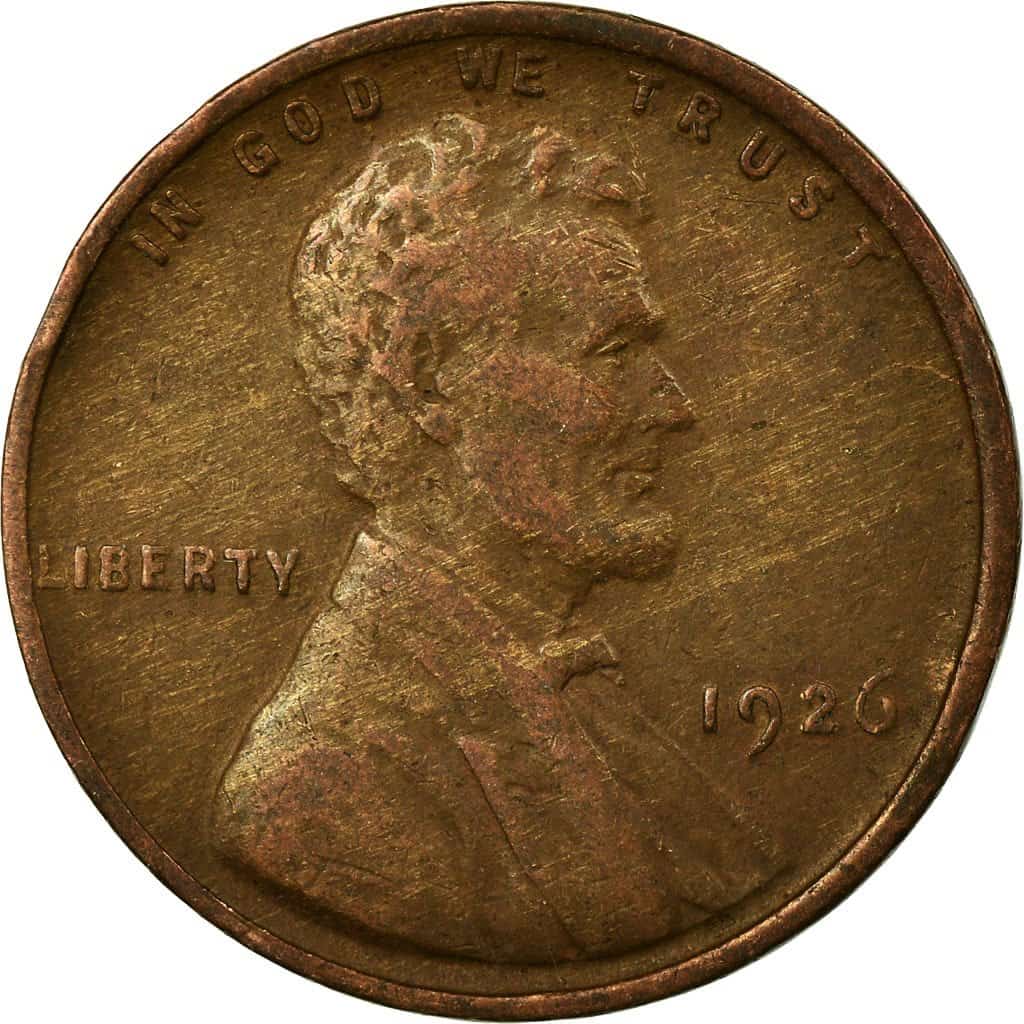 The obverse (heads side) of the 1926 Wheat Penny features a portrait of Abraham Lincoln, the 16th President of the United States. He faces right in his portrait. Above his head, the motto reads In God We Trust, while the legend Liberty sits on the left, behind his head.

On the right of the coin, at chest level, you’ll find the mintage date. For San Francisco (S) and Denver (D), the mint mark appears under the date. On the 1926 Wheat Penny, the designer’s initials, VDB, are on Lincoln’s shoulder cut-off. This signature was first placed there in 1918.

The Reverse of the 1926 Wheat Penny 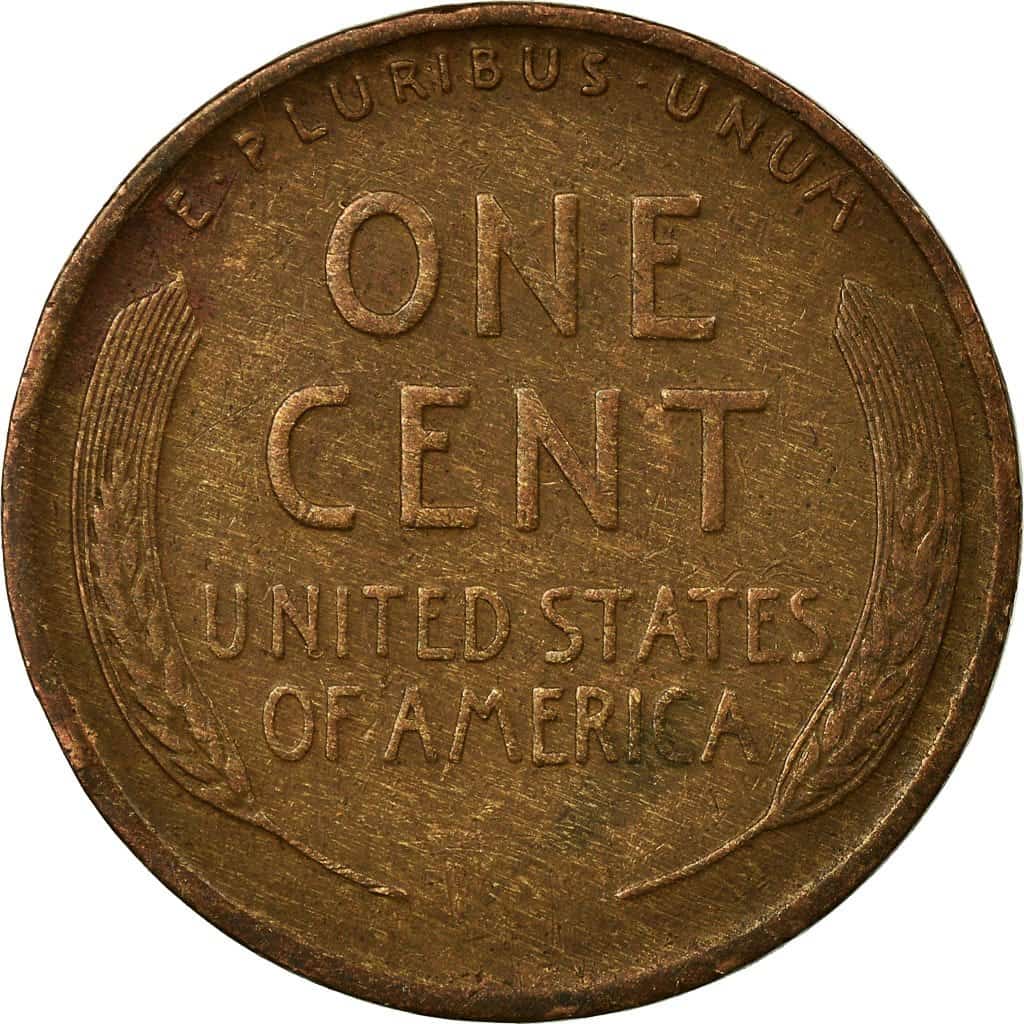 The reverse (tails side) of the 1926 Wheat Penny features two ears or stalks of durum wheat positioned on the sides of the coin. These twin wheat sheaves snugly frame the legends on the coin. At the top of the coin, E Pluribus Unum runs between the upper tips of these wheat sheaves. Below that is the denomination, One Cent, followed by United States of America.

Other Features of the 1926 Wheat Penny

The 1926 Wheat Penny gets its name from the wheat sheaves that adorn its back. For reference, other Lincoln Cents have the Lincoln Memorial (1959 to 2008), the four commemorative bicentennial designs (2009), or the Union Shield (2010 to date).

The condition and value of a penny are dictated by its mintage volumes, clarity of detail, and color. The latter is graded as RD for red, RB for reddish-brown, or BN for brown, with RD being the best quality. And while some coins had high figures, fewer are available in the wild. 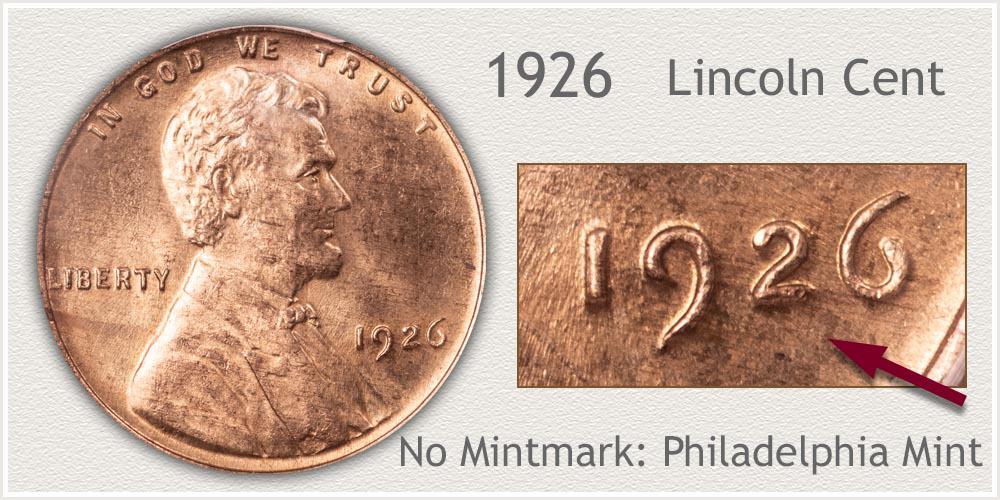 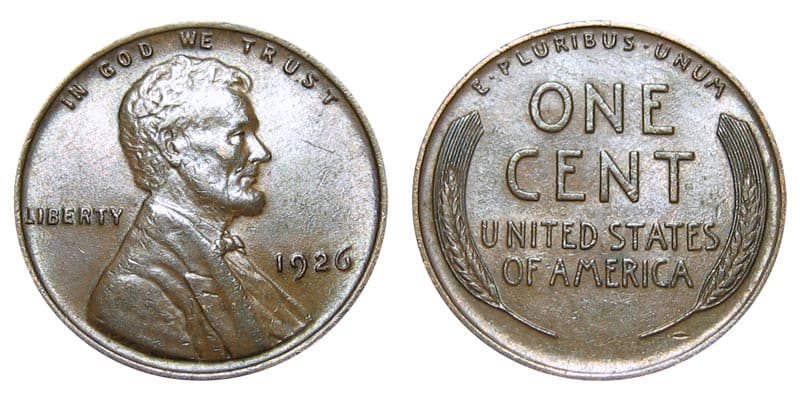 The face value of a 1926 Wheat Penny is 1 cent and based on the price of copper, its melt value could double or triple. That’s nothing to write home about. But coins with valuable errors can sometimes be worth hundreds of dollars, maybe even thousands! Let’s explore some of the errors you might find in a 1926 Wheat Penny to see if they’re worth anything.

To make a coin, the die strikes a blank disc called a planchet. These discs are punched from planchet sheets to get the right size and shape. You might find a machining error if the planchet moved while it was being formed. On this Wheat Cent, the planchet got clipped at the lower right obverse, under the date, and upper right reverse, slicing off the top of Unum.

This obverse error on the 1926 Wheat Penny is sometimes called a double-die or doubled-eye, pun intended. Errors like this happen if the die shifts while it’s being struck by the hub, forming a sort of doubling that is clearest on words or letters. But on this coin, the DDO gives Lincoln an extra eyelid. The coin can be worth $75 to $150 in higher grades and mint states.

Dies are typically used for a year, but some wear out faster and need replacing, so the mint makes multiple copies of working dies. But they’re expensive, so you might find a die in use even after it has cracks and flaws. This damage can transfer onto coins. The BIE error inserts a small slash between the B and E in Liberty which looks like the letter I. It’s worth $5 to $15.

A planchet is struck twice or more to ensure all the coin design details are faithfully reproduced. But sometimes, the disc moves slightly between strikes, and this results in off-center errors. Part of the design might be struck off the coin, leaving some sections of the coin unmarked. A 10% off-center is only worth a few dollars but a 75% can hit the hundreds.

Generally speaking, 1926 Wheat Pennies weren’t carefully struck, so you’ll often note a hazy lack of detail in his beard and hair strands. But a broadstrike error can be worth a decent amount, even in low grades. Broadstrikes happen when the collar slips off too soon, resulting in a flatter, wider coin. The collar is what forms the rim, and in F15 BN, this 1c sold for $150.

Usually, a coin is struck several times to transfer the device (i.e. the image), legends or mottos (those are the words), and mintage date. Then, until 1989, the mint mark was added manually using a hand-held puncheon. So if the person’s hands wobbled, you may find a re-punched mint mark or RPM. You might even find an accidental D over an S, or vice versa!

FAQs About the 1926 Wheat Penny

No, a 1926 Wheat Penny isn’t rare. You can find tons of them in good condition. And since the Lincoln Cent is one of the most collected coins around, a mint state 1926 Wheat Penny is a good target for numismatic newbies. You can get an extremely fine 1c coin for under $50.

My friend has a 1926 wheat Penny that looks like it has 1926 wrote on it twice. Is this possible