The Buffalo (Indian Head) nickels’ minting started in 1913 and lasted until the Jefferson nickel replaced it in 1938. James Fraser designed the coin to honor the glorious American past and the first decades of a new nation establishment.

The 1926 Buffalo nickel value is modest in low grades. However, top-rated coins can be expensive, particularly those with the mint mark D or S on the reverse. Collectors like these coins as a valuable part of American history and happily include them in their collections.

History of the 1926 Buffalo Nickel

The first five-cent nickels appeared in circulation shortly after the Civil War. New coinage was necessary for daily payments, and coins made of cheap nickel were the convenient way to reduce the amount of gold and silver coinage used for this purpose.

The first shield nickels were minted from 1866 to 1883 when chief engraver Charles Barber created beautiful Liberty Head nickels. The idea of replacing V nickel with the new design appeared in 1911 when the Taft Administration commissioned Fraser to create a new coin of the same value.

Sculptor James Earle Fraser designed the unique Buffalo nickel. The committee was impressed with the idea of showing two symbols of the American West on a coin, and they approved the design in 1912.

Their minting started in 1913, and no one was disturbed by the fact that the Indian Appropriations Act created the first reservations for Native Americans only half a century before, in 1851.

The following Indian Appropriations Act declared that Indians stopped to be members of the sovereign nation in 1871. Honoring people living in horrible conditions was obviously acceptable in those times.

The Buffalo nickel production was delayed because the Hobbs Manufacturing Company had numerous objections. Plus, many believed the new design was impractical, ugly, and inconvenient to minting.

However, then-Treasury Secretary MacVeagh decided to proceed with the existing design. Consequently, the first pieces appeared in circulation in March 1913. The production of these coins continued by 1938 when the Jefferson nickel replaced them.

Although most Americans liked new coins, the new design was problematic from the start. The problem was in the too-prominent mound of dirt that caused quick design wear. The denomination’s recess was the first design customization of many in the next three years.

You can notice several changes by 1916 besides the mound correction, like enlarging the denomination FIVE CENTS and repositioning the word LIBERTY. Despite gradually increasing the numeral thickness in the date to make them more durable, the problem was never solved.

It seemed that many breathed a sigh of relief when this coin went down in history. On the other hand, all these corrections open many possibilities for collectors of this series.

Features of the 1926 Buffalo Nickel

The US Mint produced Indian Head nickel (Buffalo nickel) from 1913 to 1938, when the Jefferson nickel minting started.

Even though the coin got a name based on the obverse, most Americans recognize it by the bison depicted on the reverse. Like some other American coinage, the nickname became viral and almost entirely suppressed the nickel’s real name.

The obverse of the 1926 Buffalo nickel 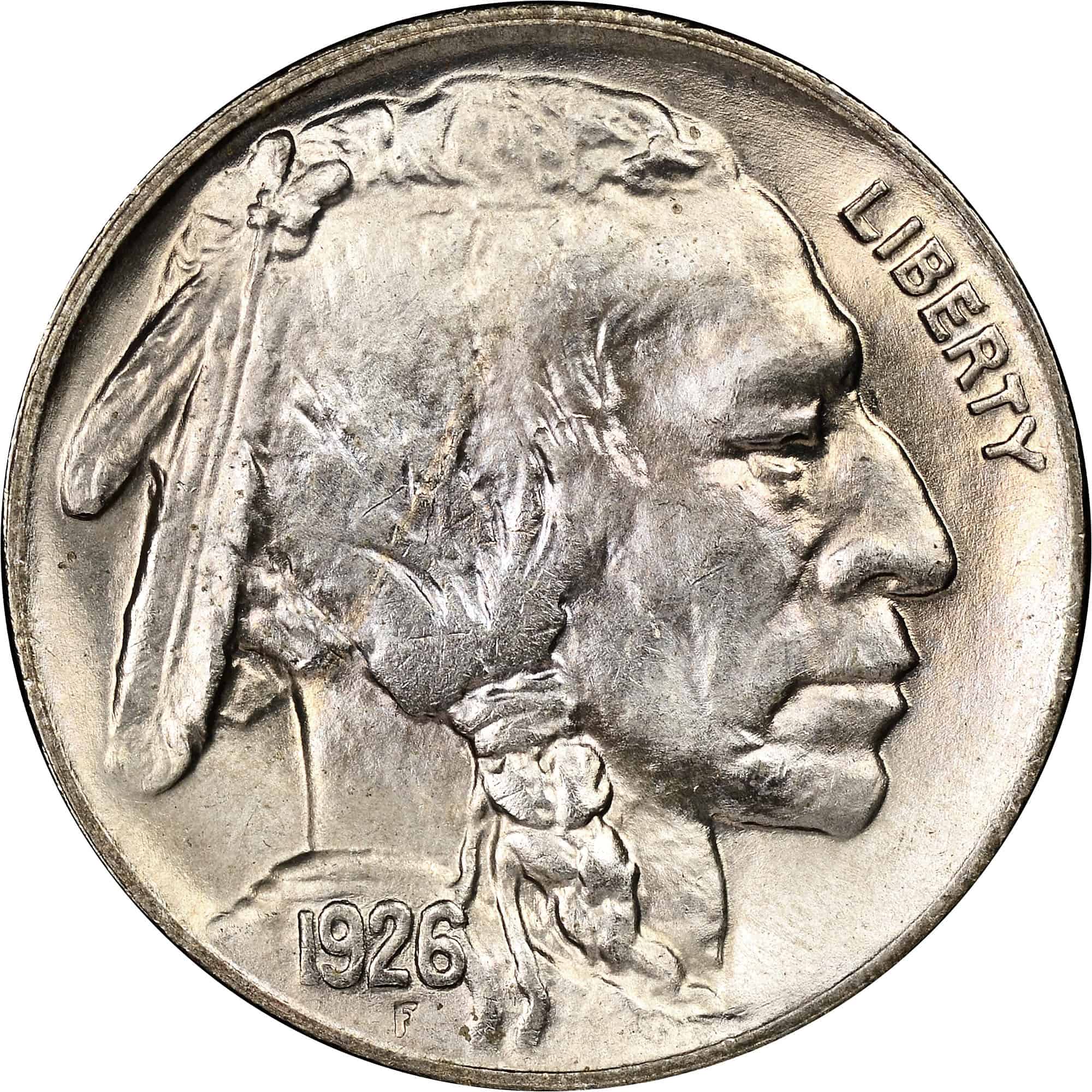 You can see a Native American image on the 1926 Buffalo nickel obverse, but it is actually based on three different Indian chiefs. Sculptor and engraver James E. Fraser combined the faces of three persons, including:

The Indian face facing right is positioned in the coin center with the word LIBERTY in front. The DATE is struck beneath the chief’s neck.

The reverse of the 1926 Buffalo nickel 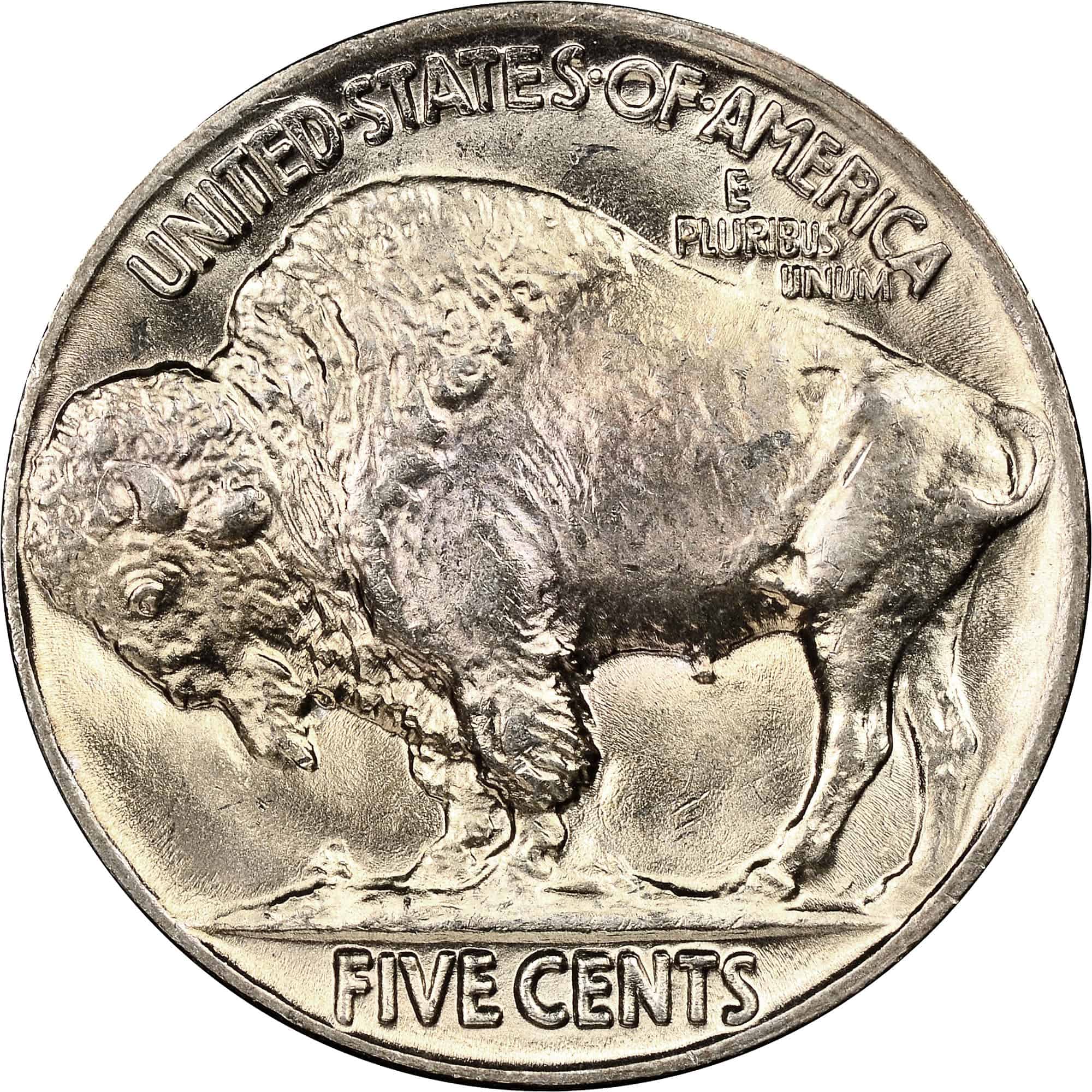 The entire 1926 Buffalo nickel reverse is reserved for an impressive American bison. Rumors say that the inspiration was Black Diamond from New York City’s Central Park Zoo, but it is impossible to find an official confirmation of that claim.

The animal stands on a mound of dirt with the FIVE CENTS denomination below. The country name, UNITED STATES OF AMERICA, is struck above its back, with an inscription E PLURIBUS UNUM in between. Some coins have the mint mark right next to the bottom edge.

Other features of the 1926 Buffalo nickel

In 1926, the US Mint produced 51,301,000 Buffalo nickels in three different mints. The highest mintage was reached in Philadelphia, but this mint produced only coins from regular strikes. Proofs were not a part of produced coinage that year.

Be aware that only slight differences can significantly affect these coins’ prices. Some are pretty obvious, while you need a magnifying glass to notice the finest and most delicate ones.

You have two ways to evaluate your coin. The first option is to do it yourself and identify the grade by checking photographs and coin descriptions. The other option is to send your nickel to a reputable numismatic expert to provide a professional assessment. 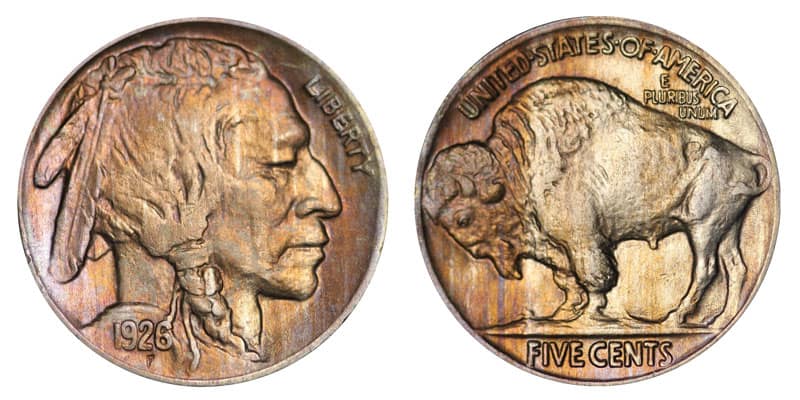 The amount of 44,693,000 produced Buffalo nickels was by far the most numerous in the total number of coins produced in 1926. That significantly affects their price nowadays, and you can find pieces in circulated condition for $0.45 to $24 on the coin market.

The most costly are specimens with an MS 67 rating, and serious collectors are prepared to pay $45,000 to $54,000 for such a gem. Sometimes particularly beautiful and rare nickels can be even more expensive. One of them won the auction record in 2020 when one collector bought it for $70,500. 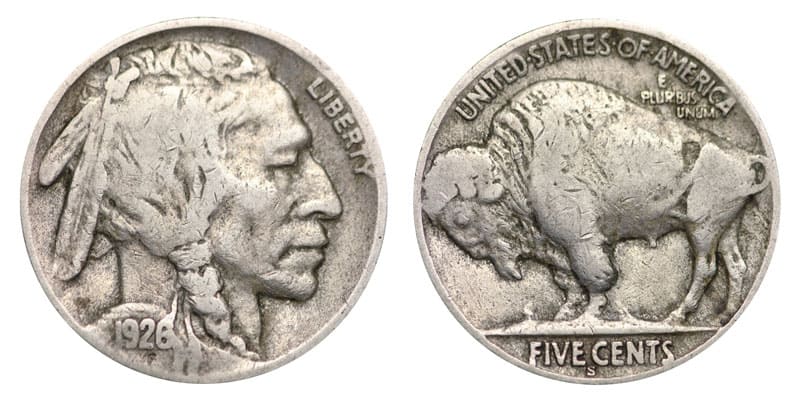 There are not too many error coins in this series, but existing ones are rare and valuable. Let’s take a look.

Some of the Buffalo nickels produced in Denver came with an unusual error. You can find it on the coin reverse and notice that a bison has three complete legs, while one front leg is broken or partially erased. That makes the animal looks like half of her leg is missing.

The reason for this error is an accidentally removed part of the reverse die due to excessive polishing. Such a coin is rare, even in circulated condition, and can be worth $75 to $1,200. Scarce pieces in an MS 66 grade are expensive, and you can expect to pay one for about $9,000 to $10,800.

Like in most series, you can find double die errors among Buffalo nickels minted in 1926. It is possible to find doubling on both coin sides, increasing their value. The most expensive is a specimen sold in 2018 for $3,120.

Some rare coins minted in Denver are unique because of having only two feathers in the Indian chief’s headdress. Collectors discovered about thirty different two-feather coin varieties, and all are worth more than nickels from the regular strike.

The auction record went to the 1926 D 2 feathers Buffalo nickel after one collector purchased it on eBay for $545.

FAQ about the 1926 Buffalo nickel

What makes a 1926 Buffalo nickel rare?

Specific errors, like 3 1/2 legs Buffalo nickels or those with two instead three feathers in Indian hair, are rare and can bring you a premium. As for coins from the regular strikes, only the highest-rating specimens are scarce and valuable. Be prepared that their prices are high and only collectors with unlimited funds can afford them.

Which 1926 Buffalo nickel is worth a lot of money?

How much is 1926 No Mint mark Buffalo nickel worth?

What is the most pricey Buffalo nickel?

The three most expensive Buffalo nickels were sold at Bowers & Merena in the first decade of the 21st century. The highest price won the Buffalo nickel 1918/7 error from Denver, $350,750.

The coin produced in Philadelphia in 1916 with Doubled Die Obverse was sold for $281,750. The most pricey specimen from regular strikes was the one minted in San Francisco in 1926. One collector paid $322,000 for this beautiful piece.