Have you come across a 1926 silver dollar and wondered how much it is worth? The 1926 silver coin is part of the coin series known as Peace Dollars.

As you might have guessed, peace dollars commemorated the end of World War I and the beginning of a new era of peace in the United States of America and the world.

Although it is quite common, the 1926 silver dollar value can be worth thousands depending on the coin’s condition. If you are lucky, your coin might be worth a lot!

Read on to learn more about the history of the 1926 silver dollar, its unique characteristics, varieties and errors to look for.

Anthony de Francicsi designed the peace silver dollar after winning a contest launched by the US Commission of Fine Art. The coin was supposed to commemorate the end of World War I (WWI) and was designed and produced in just a few months. It would be the last circulating dollar made out of silver.

De Francisci used his wife as a model to design the coin’s obverse side, which features Lady Liberty donning a crown over her flowy hair.

For the initial design, the artist conceptualized a bald eagle breaking a sword symbolizing the end of WWI and the start of a new peaceful period. In the end, the design that got a nod from Treasury and Congress featured an eagle holding a bunch of olive leaves to symbolize peace.

The 1926 silver dollar is slightly different than other peace dollars. When you look at the coin’s obverse, you will notice the word GOD is raised. This small detail is a source of many myths and theories.

One explanation for the raised lettering is related to the Scopes Trial of 1925. John Scopes was a teacher at a public school in Dayton and was arrested in May 1925 for teaching the evolution theory, which the Butler Act in Tennessee prohibited.

Scope’s case became a national debate, causing many to believe that the raising of the word GOD on the 1926 silver coin was to emphasize religion over evolution.

Many others believe that the high-relief letters in the coin were just an error that happened during the coin’s production. Indeed, the peace dollar of 1927 did not have the raised lettering. This small but interesting detail makes the 1926 silver dollar outstanding in the peace dollar collection.

The 1926 silver dollar, like the other peace dollars, was minted from 26.73g of 90% pure silver metal. It was struck at the Denver, Philadelphia, and San Francisco mints, with all three facilities producing 11,267,000 coins.

In 1926, the silver dollars produced at the Philadelphia mint dropped significantly, with the facility operating at less than a fifth of the previous year’s output capacity. Because of the reduced production, some collectors wrongly assume that the 1926 silver dollar is scarce and worth a lot of money.

While some mint state 1926 silver dollars are worth a premium, the ones in circulation are worth just a few more than the face value. There are several thousands of mint state 1926 coins in grades MS-63 to M-65, but to date, there have yet to be any examples of certified MS-66 silver coins from 1926.

In mint state, the 1926 silver dollar has an intense strike with the full design details visible and the lustre ranging from frosty to extremely brilliant. As mentioned, these coins are readily available in mint state and will fetch the most amount compared to circulated ones.

In 2021, the United States Mint minted a commemorative peace silver dollar. This latest peace coin does not feature the word GOD raised just like the other silver dollar, so it looks like this fascinating detail is unique to the 1926 silver dollar.

Let’s look at the unique characteristics of the 1926 silver dollar.

The Obverse of the 1926 Silver Dollar 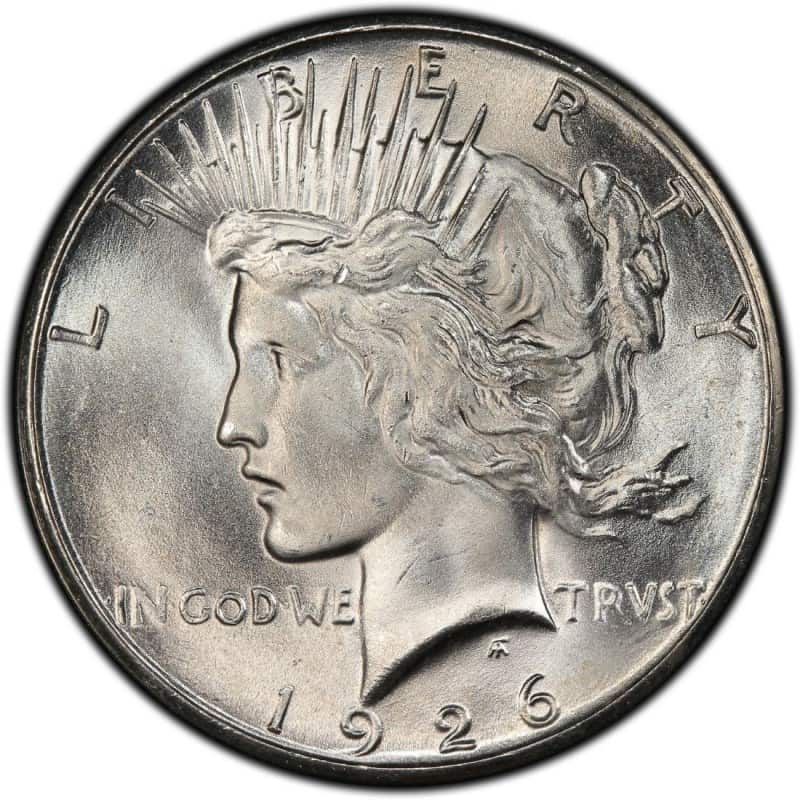 The obverse refers to the top side of the coin, also known as heads. On the obverse of the peace dollar of 1926 is a left-facing portrait of the Lady Liberty, modelled by de Francisci’s wife. Lady Liberty wears a crown with her hair flowing in the wind.

The word LIBERTY is inscribed around the top of the coin, and the motto IN GOD WE TRUST is engraved at the portrait’s truncation. In particular, the words IN GOD WE are inscribed on the left of Lady Liberty’s truncated neck, while the remaining word, TRVST (meant to be TRUST), is inscribed right behind her neck on the right side of the coin.

Around the bottom, the coin’s year of production, 1926, is inscribed. The mintmark indicating where the coin was minted is located just underneath Lady Liberty’s neck on the coin’s right side.

The Reverse of the 1926 Silver Dollar 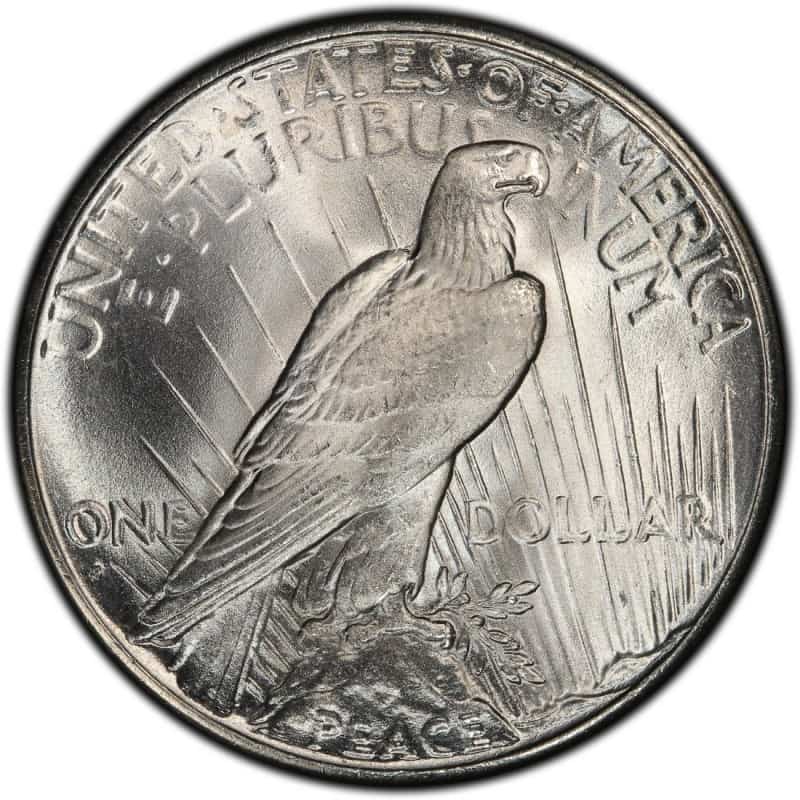 The reverse is the coin’s back side, also known as the tails. On the 1926 peace silver dollar, the reverse features a right-facing eagle patched on a hill and clamping an olive branch in its talons with rays in the background, symbolizing peace and new beginnings.

Around the top of the coin are the words UNITED STATES OF AMERICA and the motto E PLURIBUS UNUM.

The coin’s denomination, ONE DOLLAR, is inscribed across the center. The word ONE is behind the eagle’s tail, and DOLLAR is in front of its chest on the right.

Around the bottom of the coin underneath the hill, you will notice the word PEACE inscribed.

Other Features of the 1926 Silver Dollar

The coin has a diameter of 38.1mm and spots a reeded edge.

When you learn about the quirks of the 1926 silver, you’ll know what to look for to determine whether your coin might be worth a lot of money.

This section will look at the 1926 silver dollar value of each type produced that year. There are three varieties of the silver peace dollar from 1926:

Here’s a brief description of each variety and its numismatic value.

The 1926 No Mintmark Silver Dollar Value 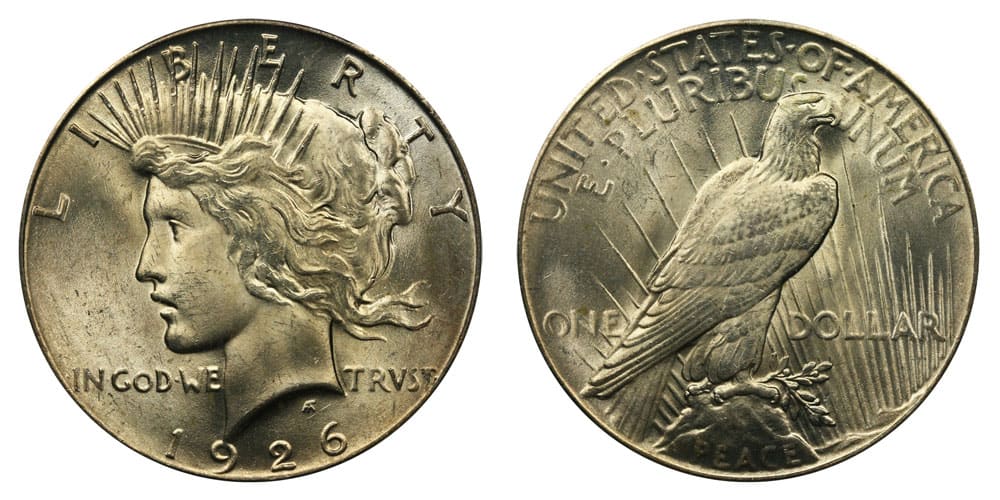 In 1926, the Philadelphia mint produced just 1,939,000 silver dollar peace coins, the lowest amount the mint had ever produced since 1921.

The low production, however, does not mean that the 1926 silver dollar is rare. The coin is quite common in circulated condition, including in worn grades up to about circulated (AU) grades.

Interestingly, many no-mintmark 1926 silver dollars are available in higher grades today, indicating that these coins were released into circulation in the late 1940s or early 1950s.

The Professional Coin Grading Service (PCGS) estimates that several hundred thousand coins are available in circulation. In average circulated condition, the 1926 silver dollar value is $29 to $70.

Mint state 1926 peace dollar coins exist too. Most are available in grades MS-60 to M-65. In the higher grades, the coins have very light bag marks, if any, with an excellent lustre and strike. 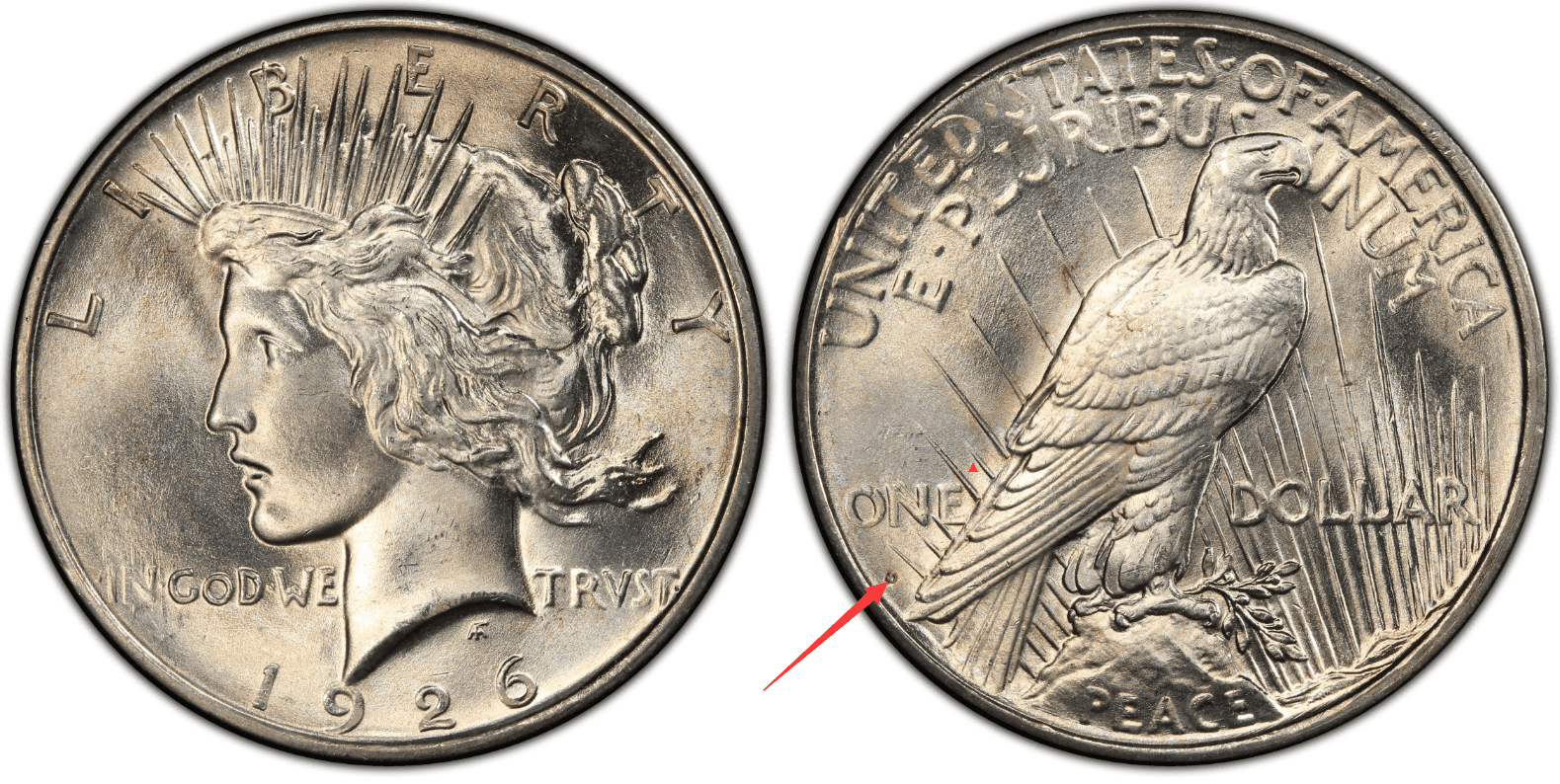 Circulated grades of the 1926-D peace dollar coin are common on very fine (VF) 20 to AU-58, a sign that many of these coins were released into circulation over the years. A 1926 silver dollar in the circulated condition is worth between $29.50 and $110.

Mint state grades are also easily available, but most are lower grades starting from MS-60 to M-63. That said, there is a good enough amount of M-64 and M-65 Denver 1926 silver dollars, so locating these coins is easy.

Examples of MS-66 to MS-67 grades of the 1926-D peace dollars are rare. Most mint-state coins have an attractive lustre and a strong strike, making them extremely desirable among collectors. In uncirculated condition, 1926-D silver dollars can be worth between $7500 for MS-66 coins and $22,500 for MS-67 grade coins. 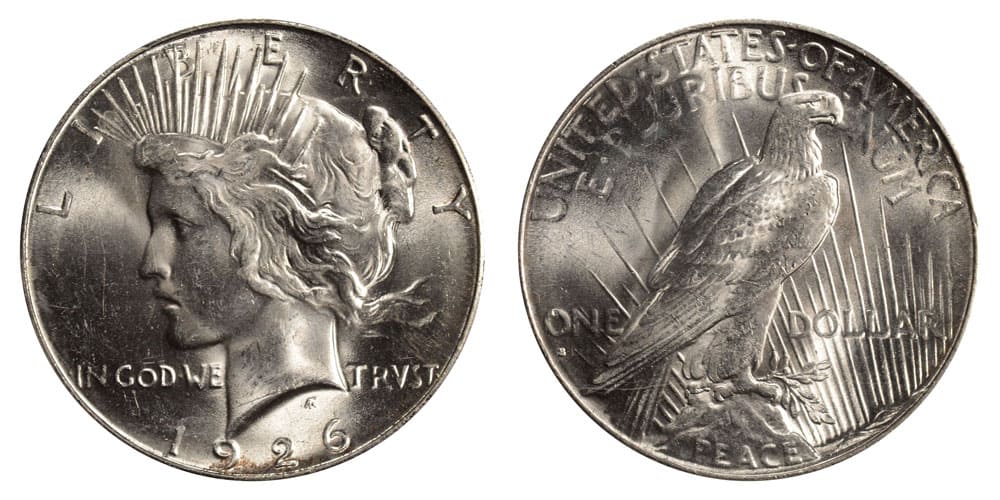 The peace dollar coins from the San Francisco mint could have been of better quality. The 1926-S silver dollar is the only one in the series minted at the facility that came out with a strong strike.

Close to seven million S-mint peace dollars from 1926 were minted, making this the last peace dollar with a mintage of more than 2 million units.

Circulated 1926-S coins are extremely common, including those in grade AU, a sign that the Mint released most of the 7 million produced into circulation. The 1926 silver dollar value for circulated coins is between $29.50 and $65

Mint state 1926-S silver dollars are also fairly easy to find. These coins are typically lustrous with a frosty appearance and a strong, good-quality strike compared to other silver dollars minted at the San Francisco facility.

The 1926 silver dollar has two distinct errors that can be quite interesting to observe.

The reversed misaligned die is noticeable on the 1926-D peace dollars. A misaligned error occurs when the top hammer die is incorrectly aligned with the bottom anvil die. So, when the coin is struck, the design is slightly off-sided.

On 1926-D silver dollar coins, the misaligned die error is seen on the reverse, where the eagle and the rays are slightly off-sided to the right instead of centred. This error is common and only fetches about $50 to $55.

The Obverse Struck Through

The struck-through is the most common minting error caused when a speck of dust or debris is accidentally struck onto a coin. These errors are usually tiny and inconceivable in that they have no big impact on the coin’s value but still qualify as errors. Collectors will, however, pay a premium for larger struck-through errors.

The struck-through error can be observed on the 1926-S peace dollar visible on Lady Liberty’s neck. These error coins are worth between $60 and $65.

While some errors can be worth a lot of money, the 1926 errors are worth much less than their regular strike counterparts. Pay attention to uncirculated silver dollar coins from 1926, which generally have a higher value than error coins.

Here, I will answer a few questions collectors commonly ask.

What makes a 1926 silver dollar rare?

Gem quality, high lustre, frosty and shining, and strong strike 1926 silver dollars are rare and highly sought-after by collectors. The bulk of 1926 peace dollar coins was released into circulation, meaning most will be worn, damaged and without any lustre. If you find a 1926 silver dollar in mint state, consider having it graded by a professional grading service; it might be worth a lot of money.

The 1926 peace dollar was struck from 90% silver metal, with the actual coin containing only 26.73 grams of silver. Although collectors are fascinated by the silver content of peace dollars, including the one from 1926, selling your coin just for the silver content will earn you little, given the small amount of silver in the coin. It would be best if you only bought or sold a coin based on its collector value.

Is IN GOD WE TRVST an error on the 1926 silver dollar?

There is no ‘U’ in Latin; instead, V is the equivalent of ‘U .’For this reason, the word motto appears as IN GOD WE TRVST. All peace dollars from 1921 to 1925 use the Art Deco font style V to mean U, which in English appears and reads as V. This is a stylistic element of those times and not a mint error, and therefore doesn’t add or subtract from the coin’s value.