1925 saw the production of silver coins known as “Peace dollars”. But are they worth anything today? And if so, how much?

We’re going to explore the 1925 silver dollar value right here. We’ll discover what makes a coin stand out from the rest. And we’ll learn about the history and design of the Peace dollar along the way.

Ready to find out what a 1925 silver dollar might really be worth? Step this way!

History of the 1925 Silver Dollar

The 1925 silver dollar is the fifth to be minted in the series known as “Peace dollars”. These replaced Morgan dollars in 1921, and were intended to celebrate peace after the end of the First World War.

They entered a world where silver dollars were being produced in large numbers. The Pittman Act had been passed in 1918, requiring millions of silver coins to be melted into bullion. It also required the Treasury to buy large quantities of silver at a fixed price and convert it into coins.

As a result, people had begun to hoard silver coins, and the price of silver had risen. All this threatened to damage the British war effort. The USA stepped in by providing silver to the British at a fixed price, melting down millions of silver Morgan dollars to do so.

The US Treasury then purchased silver from American mines, converting it into replacement coins. The period from 1920 to 1933 saw over 270 million standard silver dollars recoined. It effectively meant that millions of Morgan dollars were converted to the new Peace dollars.

It’s uncertain where the idea for a Peace dollar originally came from. But an article in The Numismatist appears to have had some influence.

Written by Frank Druffield, it quoted a coin collector called Farran Zerbe. Zerbe noted a symmetry between surrendering silver dollars to help fight the war, and restoring them “in commemoration of victory and peace”.

The idea needed the approval of Congress, but one representative – James R. Mann from Illinois – objected. By 1921, however, the Morgan dollar was over 25 years old. That meant that the Treasury Secretary could approve its replacement without Congressional approval.

The peace dollar was finally launched in 1921, the same year the USA signed a peace treaty with Germany. (The USA had not ratified the Treaty of Versailles, which had ended the war between Germany and the other Allied Powers.)

Almost 12 million silver dollars were minted in 1925. Over 10 million of those came from the Philadelphia mint facility. The remainder were struck at San Francisco.

Features of the 1925 Silver Dollar

The Obverse of the 1925 Silver Dollar 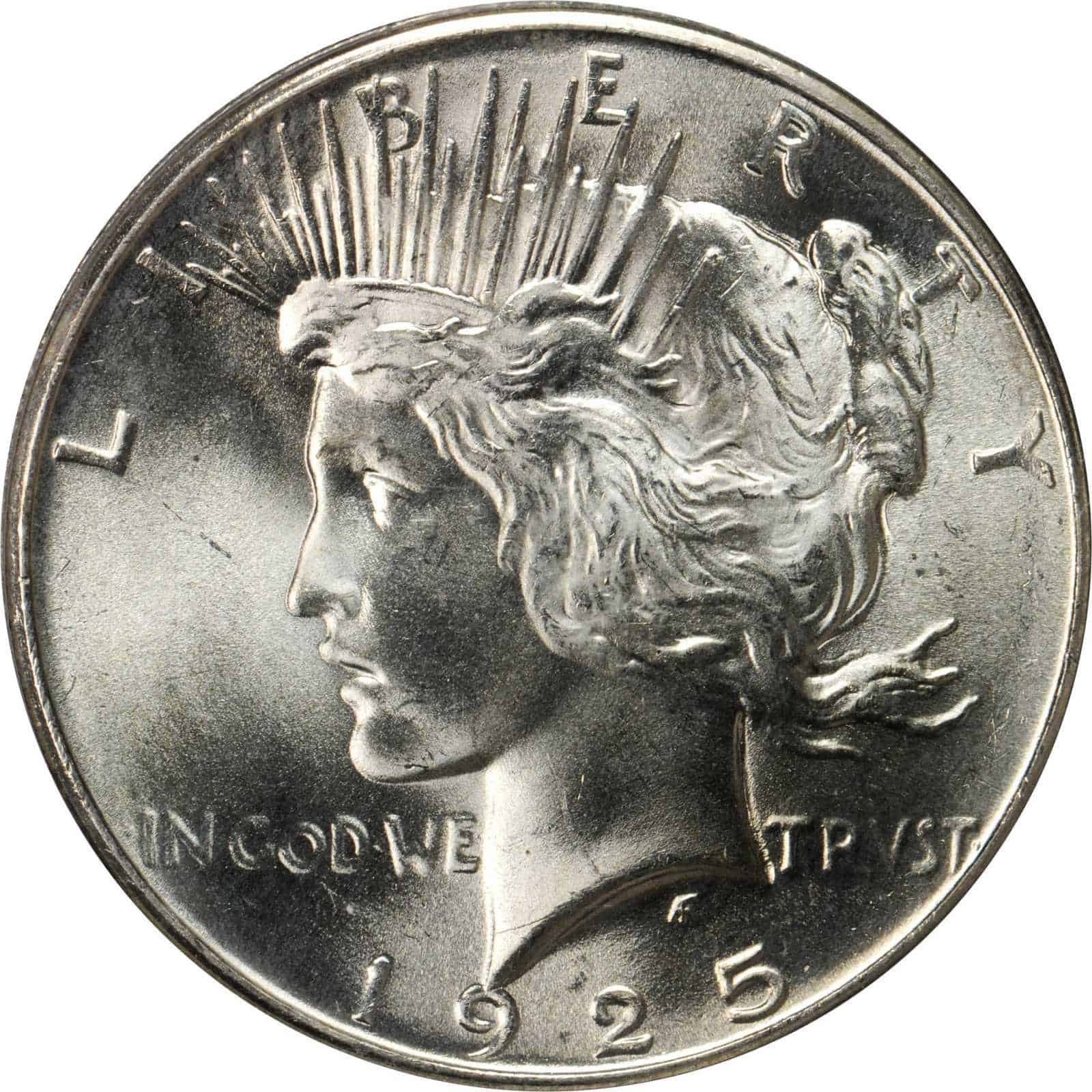 The designs for both sides of the Peace dollar were the work of a young sculptor called Anthony de Francisci. He was just 34 years of age, and his only previous work for the Mint was to create the models for the 1920 Maine centennial half dollar.

Francisci’s design had been selected after a competition, with other entries submitted by experienced coin artists. The deadline for the competition was short, and Francisci used his wife, Teresa, as the model for his Liberty.

The model for the Morgan dollar’s Liberty, Anna Willess Williams, had been somewhat reluctant. But for Teresa, it felt very different.

She recalled immigrating from Italy to the US as a child and seeing the Statue of Liberty from the steamer. She had called over her family and struck a pose imitating the statue. Becoming the basis for the Liberty on the Peace dollar, she said, felt like the realisation of a childhood dream.

Anthony de Francisci noted that he had elongated Teresa’s face in creating his Liberty. She appears on the peace dollar facing left, lips parted and with her hair blowing in the wind. Above her is the word “Liberty”, and the date is at the bottom.

The motto “In God We Trust” runs level with the middle of her neck. The first three words are on the left of her neck, with the final word on the right. Francisci’s monogram appears below the cut-off.

The Reverse of the 1925 Silver Dollar 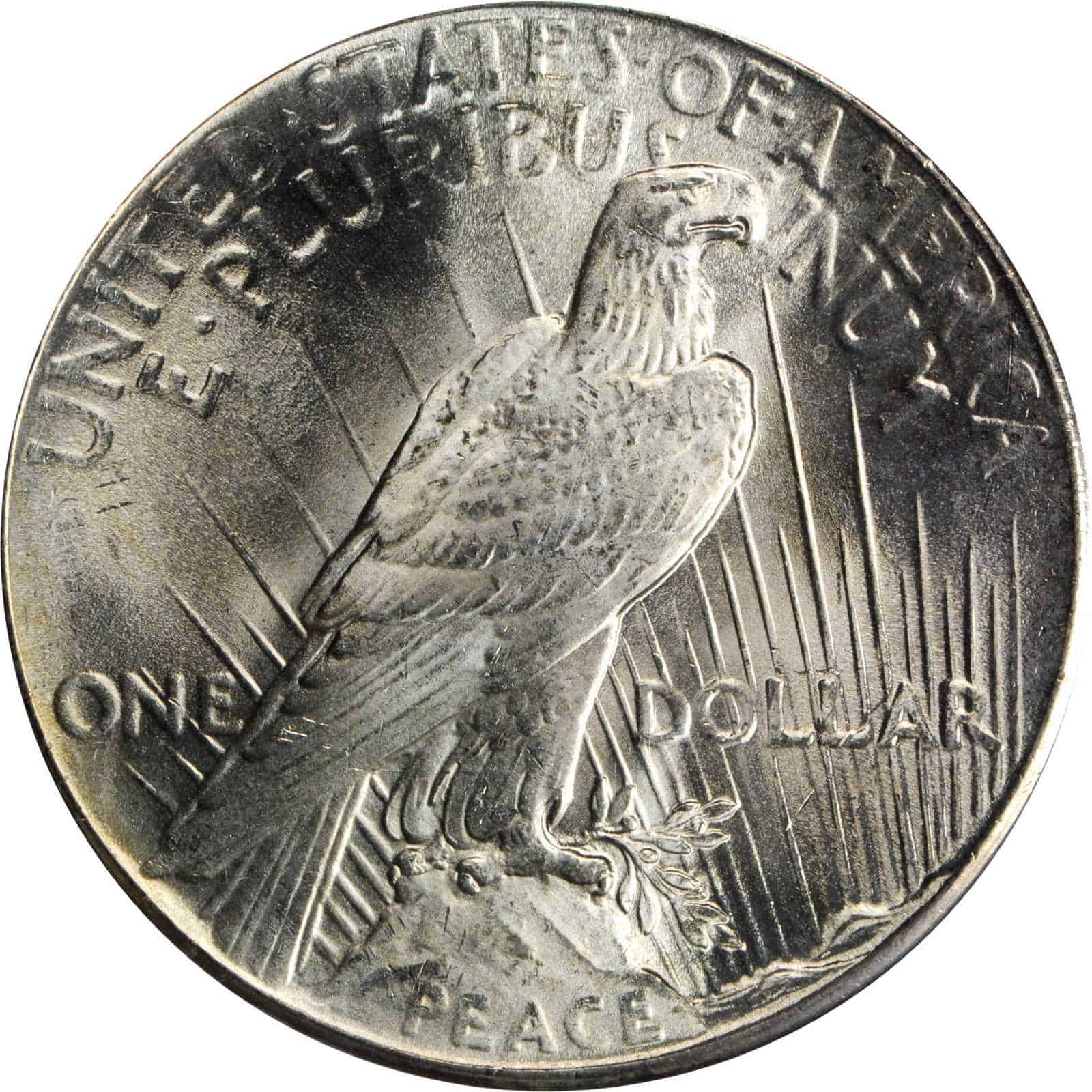 The reverse of the Peace dollar is also Francisci’s work. His design shows an eagle, emblem of the USA, standing on a rock inscribed “Peace”. An olive branch is between the bird’s talons. It’s not quite the same as the design that was originally approved, though.

Francisci had prepared an alternative design showing a more aggressive eagle with a broken sword. The more peaceable eagle was referred. But the Mint Director, Raymond T. Baker, asked for some changes. These included adding the broken sword alongside the olive branch.

When the design of the coin was reported in the press, that sword was the cause of considerable controversy. It was interpreted as emblematic not of peace, but of defeat.

Baker was out of contact when the issue blew up, on his way to the San Francisco mint facility. Acting Director Mary Margaret O’Reilly tried to reach him, but to no avail. In the end, the sword was removed from the design on the authority of the Treasury Undersecretary, Seymour Parker Gilbert.

Further work was done by the Mint’s Chief Engraver, George T. Morgan, to cover the gap left by the sword. He did this so skilfully that the changes weren’t identified for 85 years.

Other Features of the 1925 Silver Dollar

The design of the Peace dollar was adjusted in 1921. The highest parts of the design were lowered so that they were less vulnerable to wear and tear. The 1925 silver dollar design is much lower in relief than the first 1921 examples. And the spikes of Liberty’s tiara are narrower and sharper too.

This YouTube video from Numsmatic Stacker shows how to distinguish between high and low relief Peace dollars. 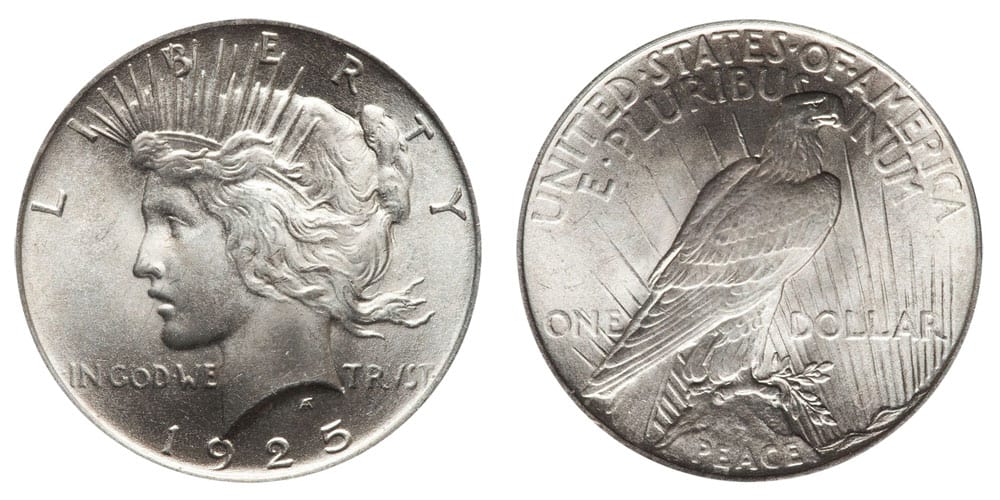 The 1925 silver dollar is one of the more common Peace dollar mintages. With over 12 million coins struck, they’re not hard to find in circulated condition today. And even mint state examples are relatively modestly priced, except at the very finest quality.

The Philadelphia mint facility struck more than 10 million coins. If your 1925 silver dollar doesn’t have a mintmark, it will be one of them. And while the silver itself has a value, most coins aren’t worth huge amounts.

The independent coin graders, the PCGS, place the value of an extremely fine XF45 example at $42. Prices remain in double digits into the mint state grades. An MS63 dollar will be worth about $90.

At just over 1.6 million, the mintage of 1925 San Francisco dollars was much lower than that of the Philadelphia coins. At most grades, a San Francisco mintmark will command a modest premium.

The PCGS values an extremely fine (XF45) 1925 San Francisco dollar at $46. That’s a little under 10 per cent more than its Philadelphia counterpart. The difference in value remains modest up until MS63, when San Francisco dollars become considerably rarer.

An MS63 example is worth about $400, almost twice as much as a 1925 Philadelphia dollar at the same grade. And at MS65, the scarcity of San Francisco examples makes these coins seriously valuable. The PCGS has graded 54 of them, and they’re valued at $40,000 apiece.

Like the Morgan dollars before them, Peace dollars offer a number of different varieties for collectors. These can be identified by their “VAM numbers”. The name comes from the initials of Leroy C. Van Allen and A. George Mallis, who compiled the definitive guide to the varieties.

The 1925 Philadelphia Peace dollar has six VAM varieties, numbered 1 to 4, plus VAM 1A and VAM 1T (5). They’re identified by characteristics such as a gouge on Liberty’s tiara (VAM 1A), doubling on the eagle’s shoulder (VAM 3), and a missing ray on the reverse (VAM 1T).

The 1925 San Francisco dollar offers another three varieties, numbered 1 to 3. VAM 2 has doubling on the reverse, while VAM 3 has a double eagle’s wing. 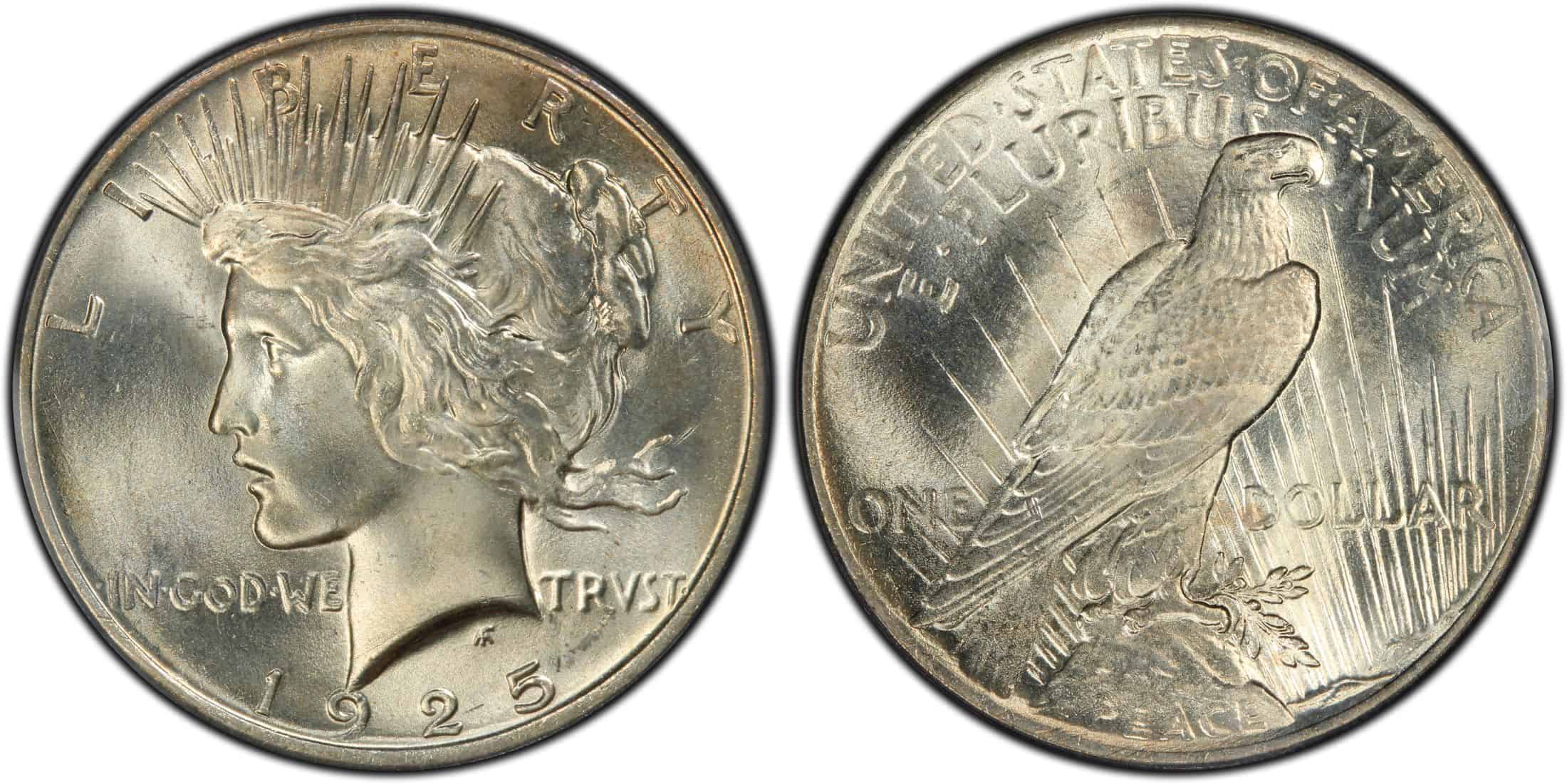 This VAM variety is one of those listed in the “Top 50” for Peace Dollars. That means it’s a variety that adds value.

To spot it, you’ll need to look closely at the bottom of Liberty’s tiara using a microscope or coin loupe. This variety has a horizontal line just above the tiara’s band. Go straight down from the “B” of “Liberty” to find it.

A coin of this variety graded MS60 will be worth about $65. That increases to $120 at MS65. Only a handful of coins of finer quality have been graded by the PCGS. There are nine at MS66, valued at $700 apiece. And one has been graded MS66+, but hasn’t been sold to establish a value. 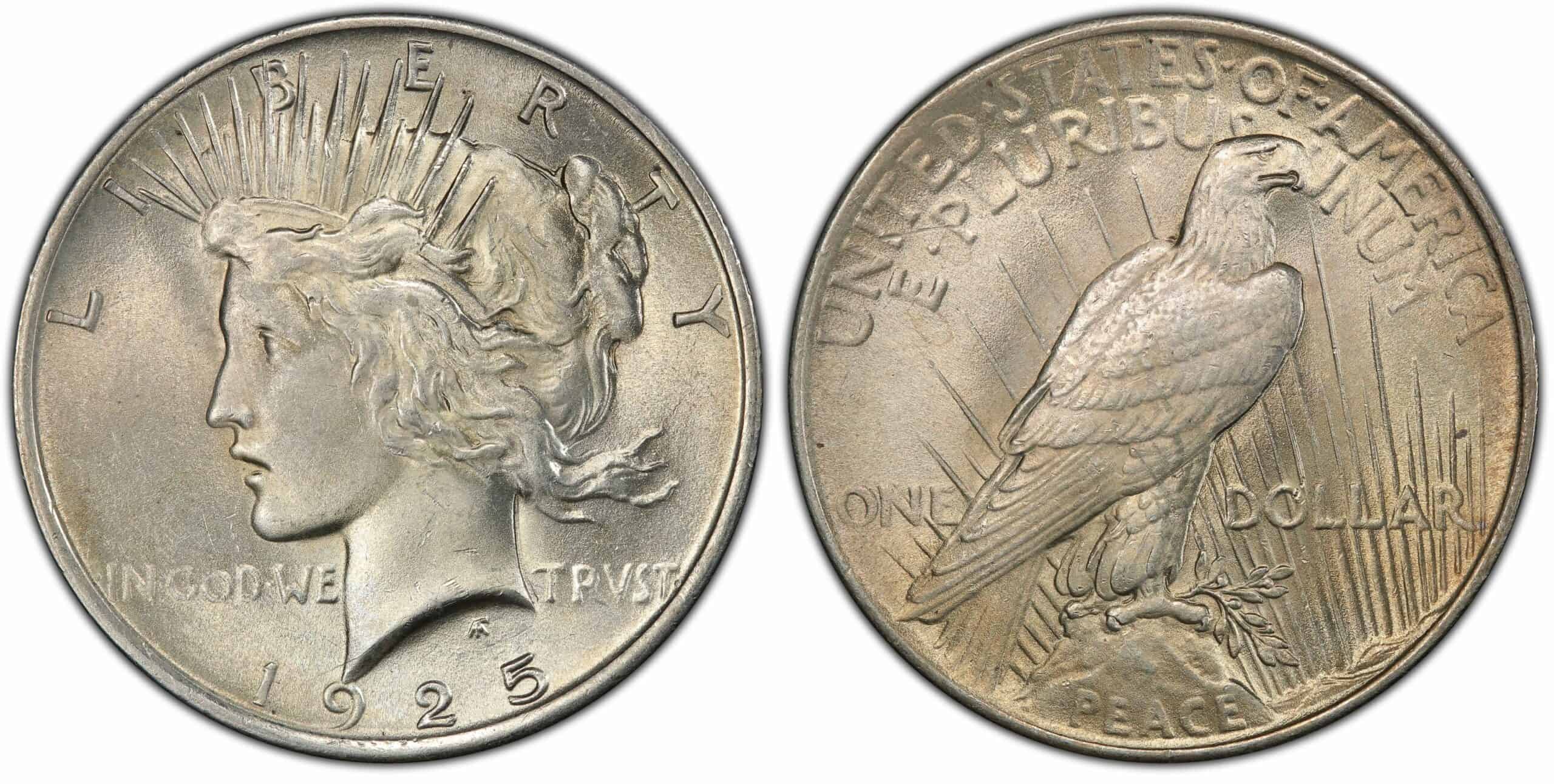 The VAM 3 1925 Philadelphia dollar is another Top 50 VAM. Look for doubling on the reverse, on the rays to the right of the eagle’s body.

This variety can be identified by a missing ray on the reverse of the coin. It was polished off the die and is absent from the area just to the left of the eagle’s feet. There’s also a shorter and weaker ray to the right of the eagle’s body, next to its shoulder. A die chip can be seen in that location too.

You won’t be able to see these differences without a microscope.

This variety of the 1925 San Francisco dollar is very desirable. It can be identified by doubling on the reverse. Look particularly at the rays on the left-hand side of the rock, and the left edges of the feathers on the eagle’s legs.

This YouTube video from Couch Collectibles looks at these varieties and other errors among 1925 silver dollars.

What makes a 1925 silver dollar rare?

It’s still relatively easy to find a 1925 silver dollar if you’re not fussy about condition. Finding mint state examples is a little more difficult, and at the higher grades they become rare.

San Francisco dollars are rarer than those from Philadelphia. And there are a number of interesting varieties.

A combination of a high grade and an interesting variety can make a coin very valuable. The 1925 S VAM 2 silver dollar graded MS65 and valued at $27,500 is a case in point.

Most 1925 silver dollars were struck in Philadelphia, so won’t have a mintmark. But those struck in San Francisco will have an “S” on the reverse. Look for it near the coin edge, a little below the “O” of “One”.