The Lincoln wheat pennies are iconic American coins, but those struck in 1920 are particularly collectible. Even though three mints produced 405,665,000 coins, they are old enough to be worn out, making those in the mint state valuable.

The 1920 penny value depends on the condition, the mint mark, and toning. Some high-grade red pieces are typically pricey, while heavily circulated coins are cheap and unattractive for most serious collectors.

History of the 1920 Lincoln Wheat Penny

Lincoln wheat pennies appeared in 1909 after the design of Lithuanian-born American engraver Victor Brenner. Interestingly, their obverse has stayed one of the longest-existing US coinage.

Brenner created the coin based on his plaque after then-President Theodore Roosevelt came up with an idea to honor Abraham Lincoln’s 100th birthday.

However, these coins became famous as Wheat Pennies, thanks to two wheat ears engraved on the reverse. Unlike the obverse that has stayed intact by now, the US Mint changed the reverse to commemorate the 150th and 200th anniversary of Lincoln’s birthday.

It was the first coin in American history with an engraved genuine person’s profile. Although it was supposed to be minted in the jubilee year alone, it became a favorite among the people and has remained the official cent to this day.

Since they are in a group of pre-war coinage, you can expect them to be sought-after among collectors. The last Lincoln cent with the wheat reverse was minted in 1958.

Features of the 1920 Lincoln Wheat Penny

The 1920 Lincoln penny is a part of the wheat cent series produced from 1909 to 1958. It took five years from President Theodore Roosevelt’s idea to add an artistic note to American coinage until the production of the first penny with the famous 16th President on the obverse. A respected historical figure like Lincoln was a natural choice.

The obverse of the 1920 Lincoln wheat penny 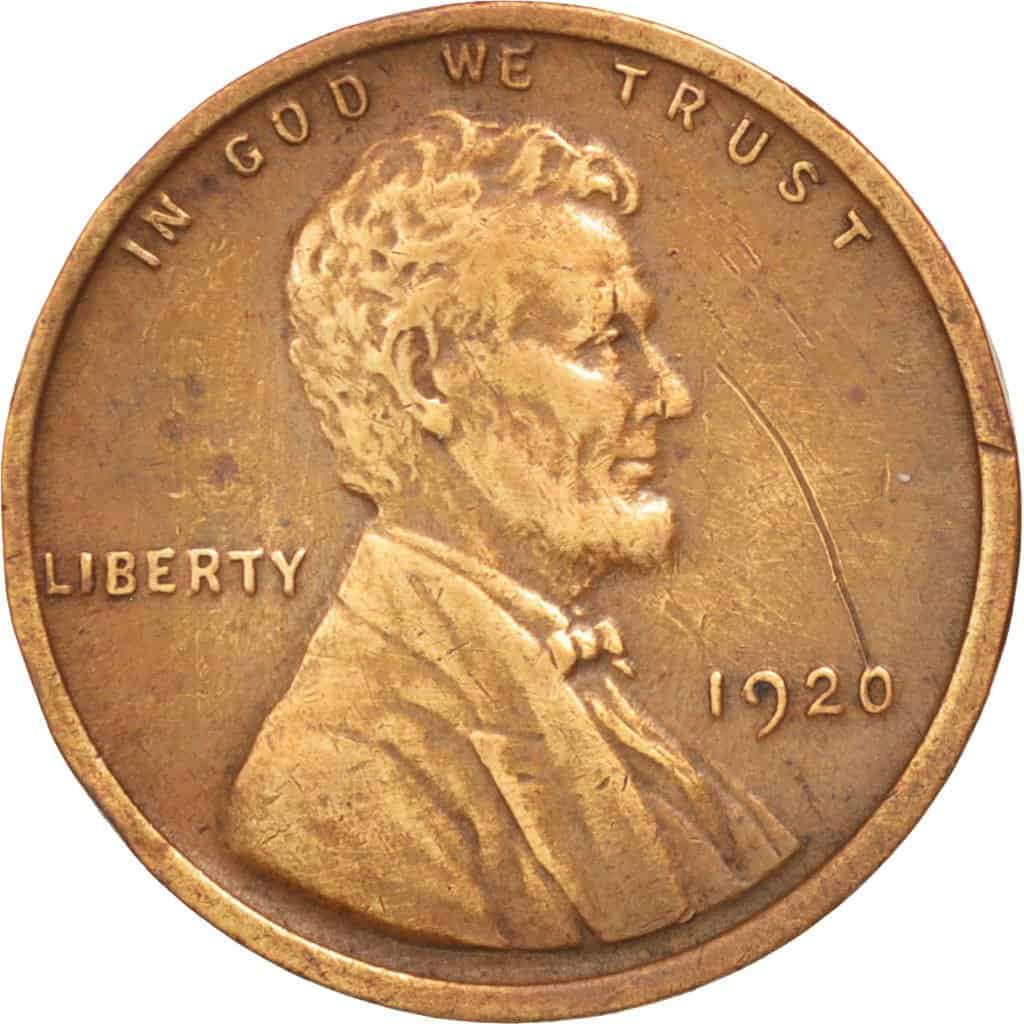 Thanks to the excellent design that honors Abraham Lincoln, you may think it is a modern-day coin at first glance. Victor D. Brenner made a precedent and created the first coin intended for circulation depicting a real person.

You can see a famous 16th American President’s profile on the obverse center facing right. Behind his back is the word LIBERTY, while you can notice the date 1920 in front of his bust.

Coins produced in Denver and San Francisco have a small letter D or S below the date. Its absence means you have a piece struck in the Philadelphia mint. A motto IN GOD WE TRUST is precisely positioned above the President’s head.

The reverse of the 1920 Lincoln wheat penny 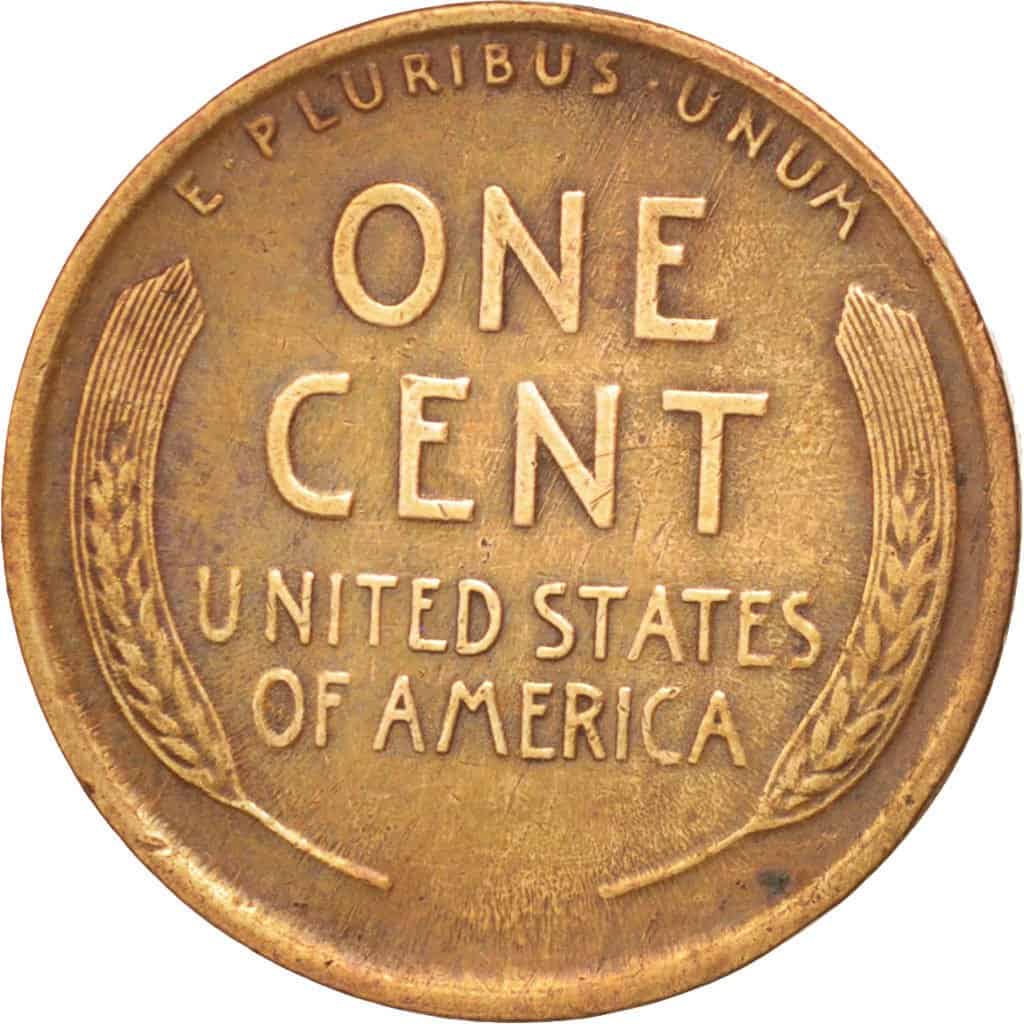 This coin has a relatively simple reverse compared with some later cents. You can see the denomination ONE CENT positioned centrally with the country name, UNITED STATES OF AMERICA, below.

Two large wheat ears surround this central composition. As you probably know, this coin was named Wheat Penny because of these stalks. A Latin saying E PLURIBUS UNUM is centered along the top coin rim, complementing the simple yet elegant reverse design.

Other features of the 1920 Lincoln wheat penny

Three mints produced Lincoln pennies in 1920 but without proof pieces since the last group was struck in 1916. Such a situation was like that until 1936, when the US Mint continued to make these coins for collectors. 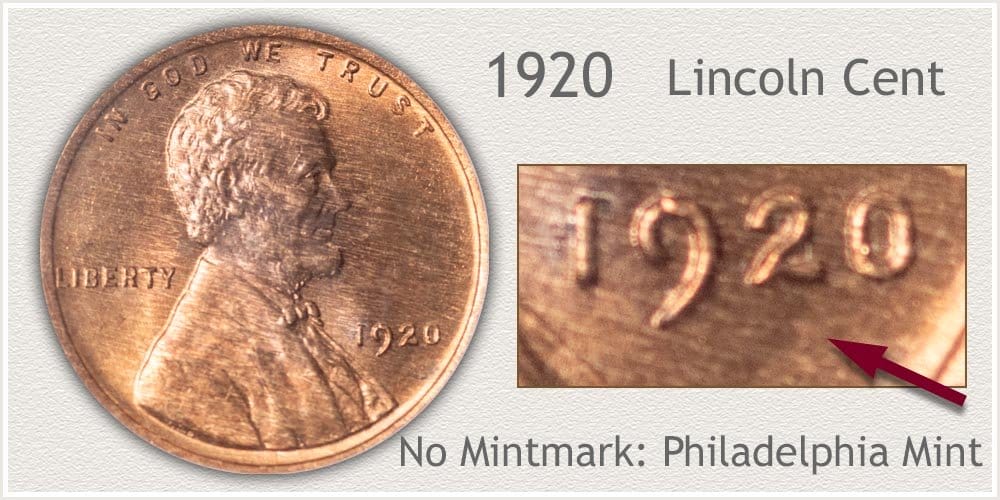 The Philadelphia mint produced 310,165,000 Lincoln wheat pennies in 1920, which was a considerable share of the total 405,665,000 minted pieces. Despite high mintage, these old coins in uncirculated condition are rare on the market.

However, their price significantly depends on toning, and you should set aside $10 to $70 for brown pieces. Red-brown ones cost about $20 to $120, but beautiful red specimens in the highest grade can be worth up to $6,600.

The most expensive 1920 Lincoln wheat penny is one piece with a sharply struck design and breathtaking red toning in an MS 67 grade. One collector bought it for $16,756 on eBay in 2012. 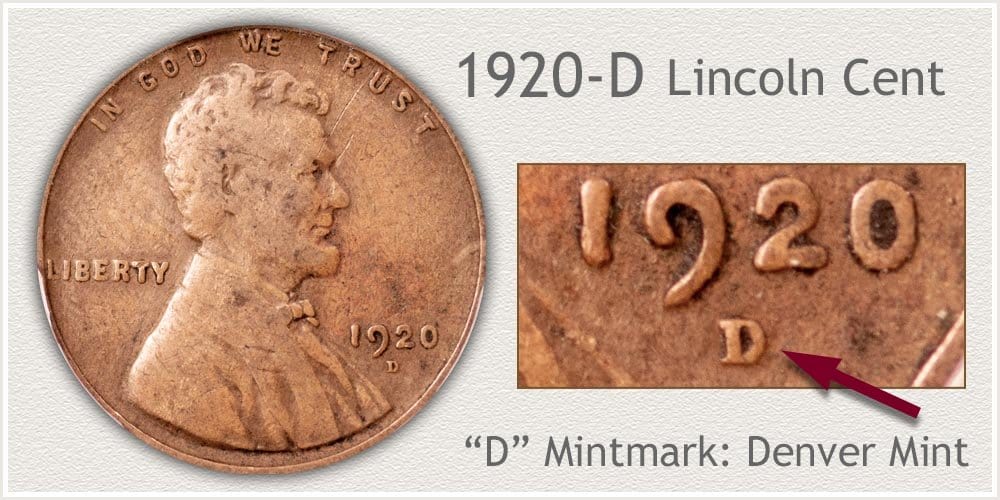 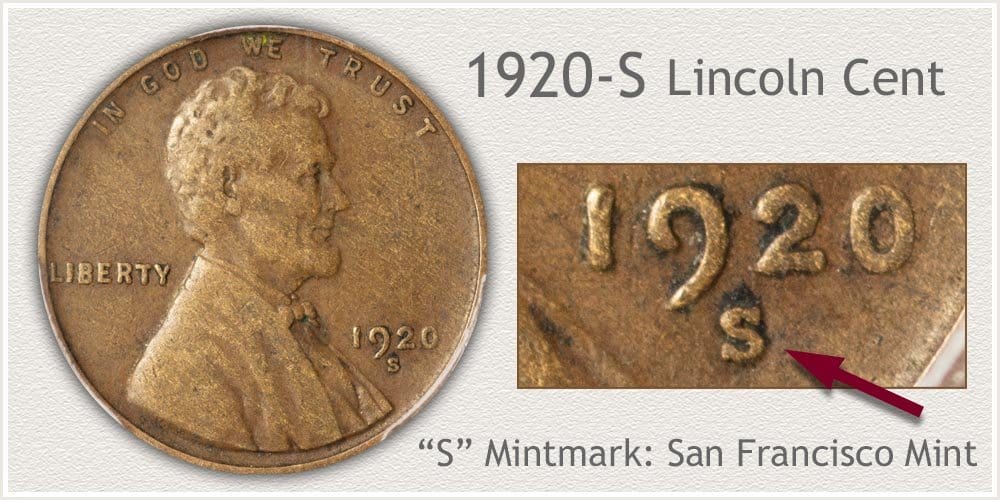 With 46,220,000 produced Lincoln wheat pennies, the San Francisco mint had the lowest mintage in 1920. While worn pieces that have circulated for decades are inexpensive, you should pay approximately $85 to $690 for brown coins in the mint state.

The most expensive 1920 Lincoln wheat penny ever sold was one red coin in an MS 65 grade struck in this mint. It won an auction record in 2006 after reaching $48,875 at Heritage Auctions.

Error Lincoln wheat pennies are different than regular coins of the same type. You can recognize a few standard irregularities among 1920 coinage, and these pieces are often worth more than those from the regular strike.

The Philadelphia mint produced coins for over 40 foreign governments before stopping this practice in the 1980s. Some included:

The condition was to separate their production from US coin minting, but sometimes errors happened. The result was the 1920 Lincoln wheat penny struck in Philadelphia on a Centavo planchet.

When the Lincoln penny was struck on the foreign planchet, the result was this rare error. The copper-nickel Centavo planchet resulted in differently colored pennies that combined light gray and peach toning.

Plus, the Centavo planchet was slightly undersized compared to regular pieces for penny production, so errors came with a cut-off motto IN GOD WE TRUST. It is known that only 15 such coins still exist.

You can be sure to have a coin with this visual minting error when its design looks recessed into the coin surface. In this case, the outer edge surrounds a dish-looked coin.

This error occurred when the collar failed to place at the exact striking moment. In this case, the result is a coin without a precisely cut edge and with freely squeezed metal outward. Remember that only broad-struck error pennies with an entirely visible design are collectible, and their price depends on their appeal.

This error with an extra Lincoln’s eyelid is uncommon among pennies made in 1920. However, you can still get $50 to $200 for such a piece.

Such a penny has visible cracks or flakes on the outer layer. You can get about $5 to $100 for it.

This coin error is not particularly rare and wrongly struck pennies are typically worth $5 to $250.

FAQ about the 1920 Lincoln Wheat Penny

Like most Lincoln wheat pennies, these minted in 1920 are abundant on the current coin market. However, finding well-preserved pieces in a high grade can be challenging, particularly those with desirable and highly appreciated red toning.

Which 1920 Lincoln wheat penny is worth a lot of money?

How much is 1920 No Mint mark Lincoln wheat penny worth?

While circulated Lincoln wheat pennies produced in Philadelphia in 1920 are cheap and typically worth $0.20 to $4.50, some high-grade pieces can be pricey.

The price primarily depends on the coin color. Brown pieces are affordable, and you can buy one for $10 to $70, while red specimens can reach up to $6,600 at auctions.

What is the rarest Lincoln wheat penny?

Lincoln wheat pennies produced in 1909 had two versions, the one with VBD initials and later pieces without them. Collectors consider the 1909 S VDB Lincoln wheat penny minted in San Francisco the rarest specimen in the series.