The Buffalo Nickel is a pretty coin and was part of Theodore Roosevelt’s infamous coin beautification project. This initiative deeply impressed the public, but it was a nightmare for mint officials and a battle of wills among the sculptors involved! Today, some of these nickels are quite valid as investments, so let’s learn more and asses the 1920 Buffalo Nickel Value.

History of the 1920 Buffalo Nickel

In 1904, Theodore Roosevelt decided American coins should be more artistic and attractive. He was a fan of Ancient Greek coins in particular, with their high relief and deep detail. And since he was close friends with the famous sculptor Augustus Saint-Gaudens, he made some loud hints to the US Mint until they hired Saint-Gaudens to beautify the nation’s coinage.

Here’s the thing though – Saint-Gaudens had previous run-ins with Charles E. Barber, the current Chief Engraver at the mint. Their mutual dislike was both personal and professional. Yes, they were both skilled artists, but Barber was a tradesman of sober English heritage and Saint-Gaudens had French-Irish roots that valued classical technique and artistic integrity.

At heart, Barber was an engraver and die-maker, driven by the practical, fiscal, and physical limits of coins and medals, while Saint-Gaudens was a sculptor, given to grand depictions, movement, and living art that didn’t always work on coins. Their differences began back in 1891 when they clashed over silver coinage, and passed down to Saint-Gaudens assistants.

It also didn’t help that these pretty new coins were commissioned to phase out Barber’s own designs for the quarter, dime, half dollar, and V-Nickel. So by the time Victor David Brenner was redesigning the Lincoln Cent and James Earle Fraser was conceptualizing the Buffalo Nickel, the resentments ran fairly deep. And while the pretty coins prevailed, so did Barber!

For the new nickel, Fraser made sketches that had Abraham Lincoln, an American buffalo aka bison, and a Native American man in traditional garb. The mint chose the latter two for the reverse and obverse respectively. And while there are multiple claimants, the models for both the warrior and the bison have never been confirmed. Fraser said they were composites.

Barber vs Bison – The Question of Coin Relief

To ensure that rationality reigned, the versions of the coins that exited the mint had considerably lower relief than their designers intended because Barber flattened them significantly to ease the coining process. But with the Buffalo Nickel, in particular, the intense texture and raised segments still proved to be a problem even after multiple edits at the mint.

As a result, many of today’s Buffalo Nickels have part of the date, designer’s initial, and the coin denomination missing. This is an issue for resellers because much of a coin’s value comes from its minting year and location. While novices might be tempted to use chemicals to reveal the date, this lowers the value of the coin. Production costs were a challenge too.

Because of how the Buffalo Nickel was designed, it needed additional die strikes to faithfully render the imagery, and this meant dies wore out a lot faster. So while the public loved these coins, then and now, they cost the mint a lot more than was practical or desirable. And then there was the Hobbs Controversy, initiated by the manufacturing magnate Clarence Hobbs.

His company made counterfeit coin detectors, and while he didn’t have a large market share, he kicked up enough of a stink to delay the Buffalo Nickel coinage from July 1912 to March 1913! Still, the coin was popular enough to survive the full 25 years that Congress allowed it (1913 to 1938). And when its time was up, the mint was happy to let that beautiful bison go.

Features of the 1920 Buffalo Nickel

The Buffalo Nickel in general is a highly textured coin with lots of fine detail. Unfortunately, a lot of these lines got lost in circulation as fingers brushed over the coins. Let’s talk about the features of the 1920 Buffalo Nickel, though they’re not always visible on the ones around today. The date, for example, has rubbed off on most business strike samples of these coins.

The Obverse of the 1920 Buffalo Nickel 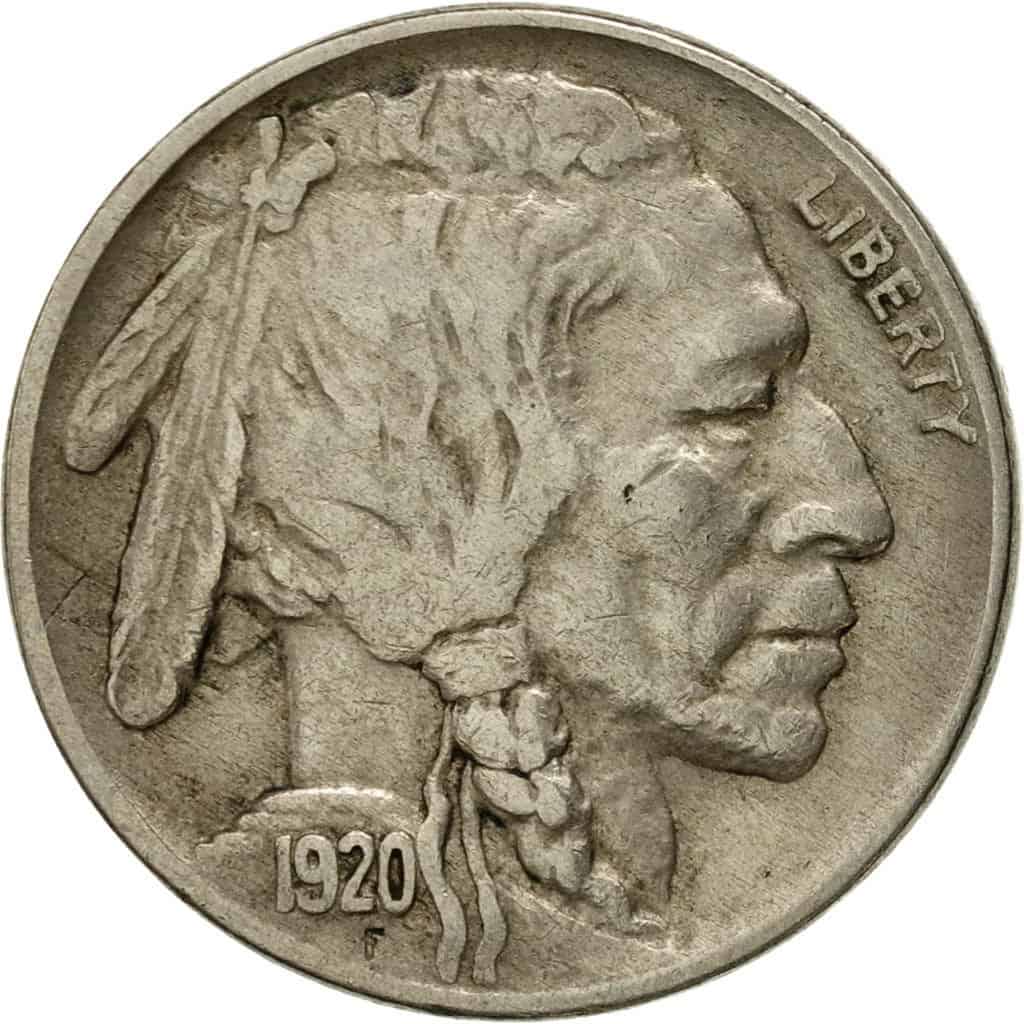 The obverse (heads side) of the 1920 Buffalo Nickel features a composite profile of a Native American warrior with feathers in his hair. That’s why some people refer to this coin as the Indian Head Nickel or the Native American Head Nickel. This device (that’s the technical name for the image on a coin) is closely cropped and almost touches the rim on all sides.

The mint date is at the base of his neck on a raised portion of his clothing. Under the date, there’s an F for James Earle Fraser, the designer of the coin. But on many circulating samples, both the F and the date rubbed off long ago. The Native American faces to the right on his profile. The legend Liberty runs along the right rim, in front of his forehead and nose.

The Reverse of the 1920 Buffalo Nickel 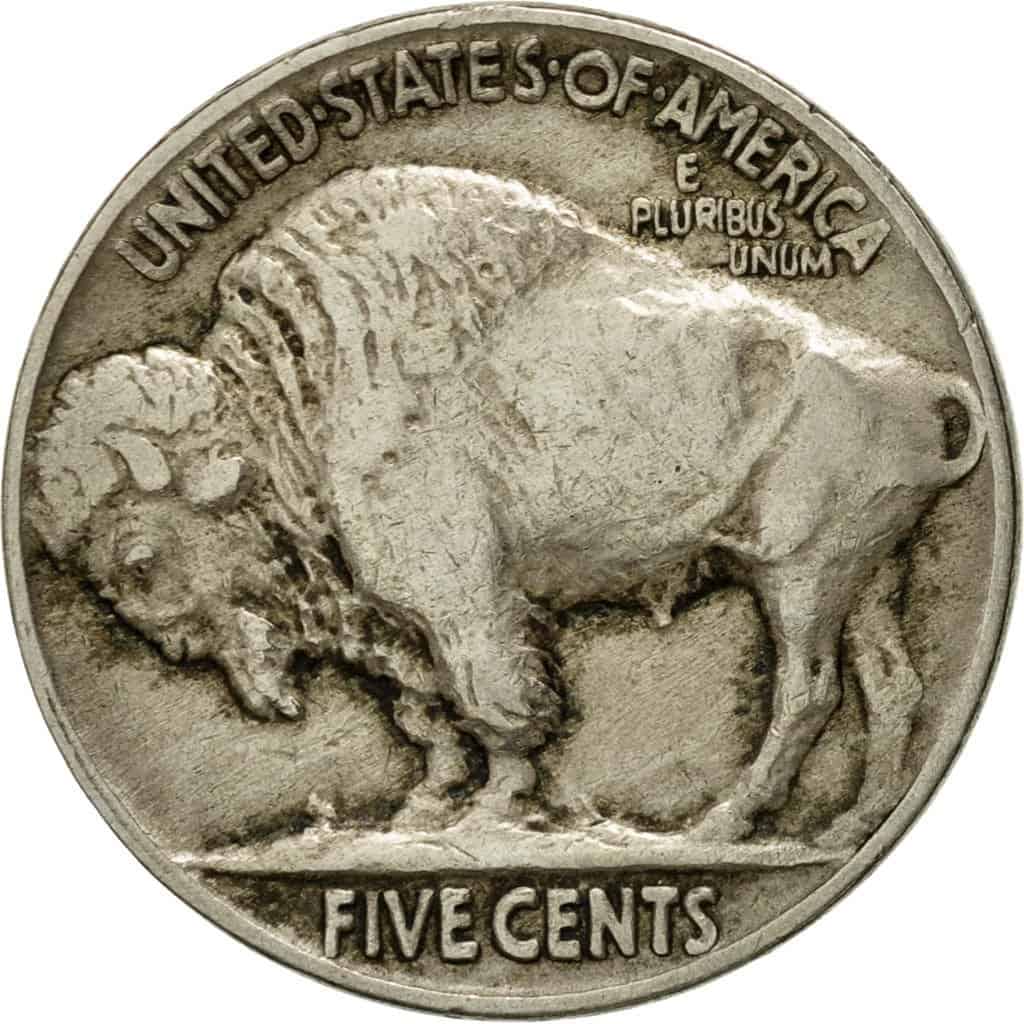 The reverse (tails side) of the 1920 Buffalo Nickel features a bison. Most people refer to it as a buffalo, but technically speaking, buffalos live in Africa and Asia and look slightly different from the bison that are native to America. For reference, buffalos are smaller, but have larger outward-facing horns, and are less hairy than bison. But let’s get back to this nickel’s reverse.

At the top of the coin is the legend United States of America, and the motto E Pluribus Unum is tucked in the spot above the bison’s back. It’s in a much smaller font because there isn’t much room. At the bottom of the coin, the bison stands on a patch of raised earth that was initially a hill. The denomination Five Cents is on the mound, with the mint mark under it.

Other Features of the 1920 Buffalo Nickel

The Buffalo Nickel maintained the same metal composition throughout its lifetime – that’s 75% copper and 25% nickel – and it has always had that silvery sheen, though it quickly faded in circulation. The coin measures 21.21mm in diameter and is 1.95mm thick with a smooth edge. This nickel weighs 5g but may be slightly lighter as bits of the coin wear off.

In terms of resale value and speculator interest, the minting location of a coin is only outclassed by its listed errors, so let’s go mint by mint to see what these coins are worth. 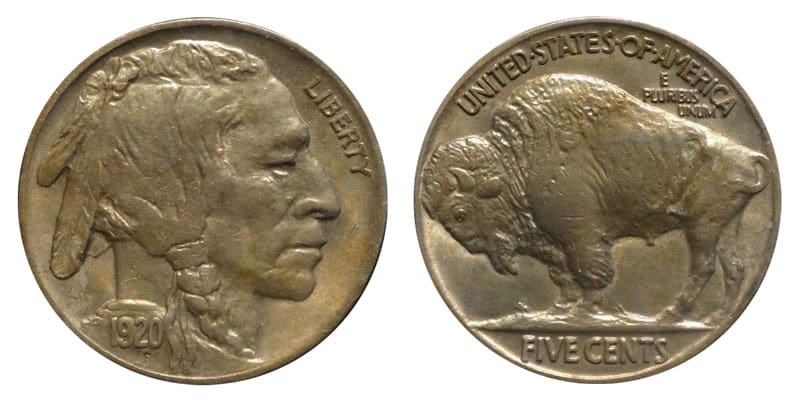 Coin errors occur as a result of movement during the minting process, so let’s start with an overview. After an artist’s sketches are approved, the mint uses rubber, epoxy, plaster, and a reducing machine to make a Galvano which then creates the master hub. A master die comes next, and it makes the working hub, which later makes the working dies. These form coins.

Depending on the design of the coin, the hubs, dies, and planchets (that’s the technical name for coin blanks) need to be struck multiple times to ensure the fidelity of the visuals. And if the metal moves between strikes, you can get errors like doubling, tripling, or misalignment. Some of these errors can be worth a lot of money, so let’s look through a few common ones. 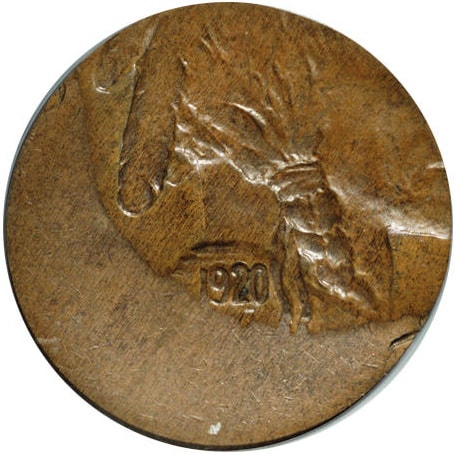 One error can raise the value of any coin, but two errors are even better! And this 1920 Buffalo Nickel combines a wrong planchet with a misalignment. The blank was a 1c, which you can tell because it weighed 3.11g and was slightly smaller in diameter. Also, it shifted mid-strike leaving part of the planchet blank. In 2017, this MS 64 BN auctioned for $12,337!

Because the Buffalo Nickel was so punishing on dies, cud break errors were pretty common. They happen when a crack or crevice from a damaged or broken die gets transferred onto the coin. And since these dies wore out three times faster than other designs, they stayed in use longer than they should have and caused lots of cuds. Ungraded, this error was $65 on eBay.

Visually, you might mistake a lamination error for a cud break, since both flaws make the coin look like it’s flaking off. But lamination errors happen when a contaminant separates the metals in an alloyed coin, which in this case are copper and tin/zinc. This double error was struck on a 3.1g Penny Planchet to boot! In AU 55 BN, the two errors were worth $4,900.

We’ve just described how lamination errors occur, and they generally appear as a crack or flaking on the horizontal plane, which means a layer seems to peel off the coin at the point of damage. This time, the lamination error is on the obverse, and since this is a Buffalo Nickel, the separating metals are copper and nickel. In the low grade of G 4, the coin is worth $50. 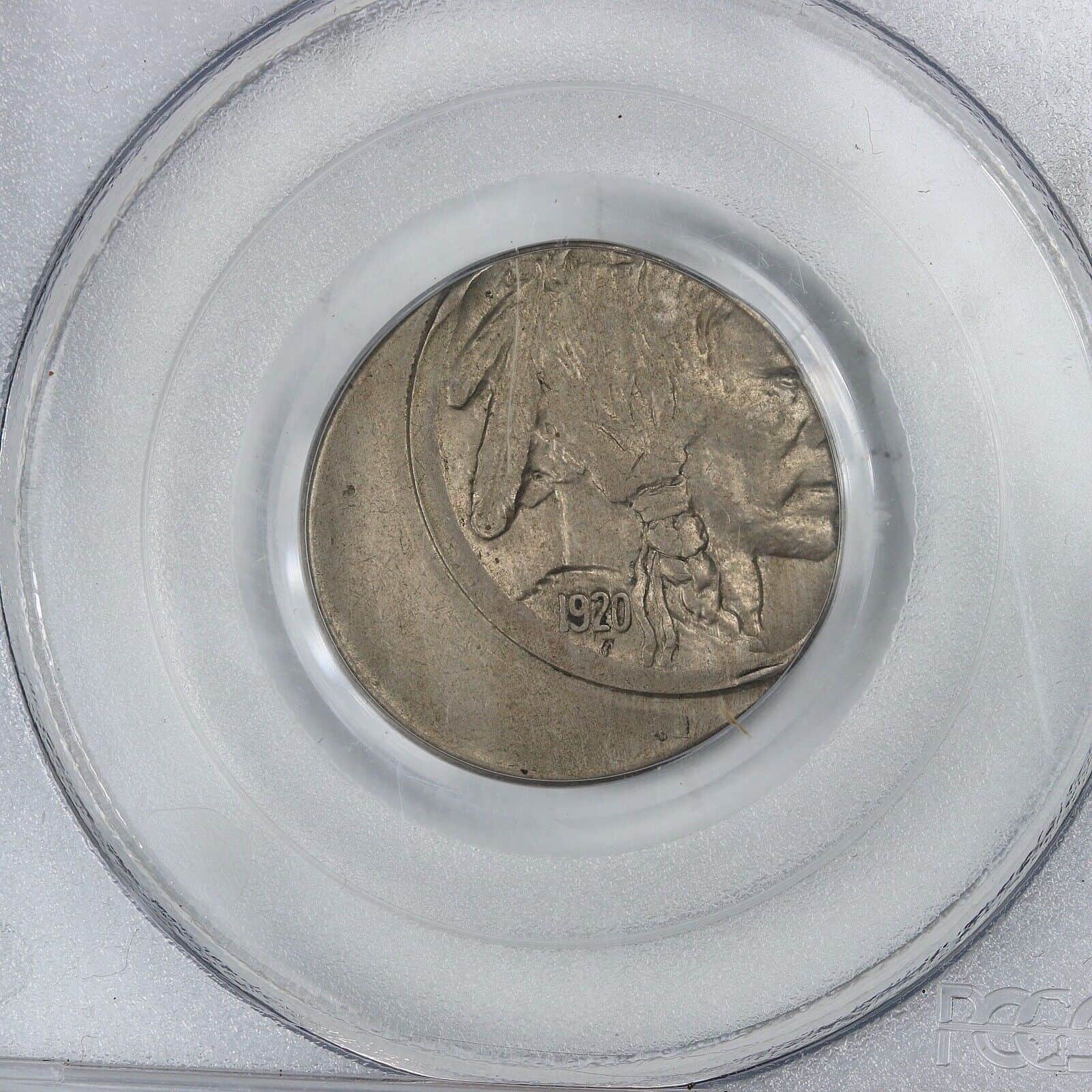 We saw an off-center error earlier, but that one was a double error, so it had way more value. In this case, you see a simple misalignment of 30% that leaves a distinctly blank portion at the top obverse and bottom reverse of the coin. In AU 58, this coin sold for around $1,100 and since the coin hasn’t lost its shape and is in average grade, you could find it in a coin roll.

As we mentioned, Buffalo Nickels require multiple strikes for the design to take. If the planchet shifts before the first strike, you’ll spot the kinds of blank sections we saw earlier on this list. But if it shifts during the second or third strike, you end up with overlapping bits that sometimes distort the shape of the coin. In AU 55, an error like this is worth $8,000!

RPM means re-punched mint mark, and it’s a doubling or tripling error on the mint mark. Until 1989, these marks were placed by hand after everything else had been machined into place. So if the hand-puncheon shifted, the second or third mint mark may appear in a slightly different spot. Only two D/Ds are known, and they’re worth $500 to $1,000 in MS.

FAQs About the 1920 Buffalo Nickel

What Year Buffalo Nickel is Worth Money?

It’s on the reverse, under the coin denomination, between the E in Five and the C in Cents.