If you know anything about early Wheat Pennies, it’s the story of the VDB debacle. You may also know those flames were fanned by a clash between Chief Mint Engraver Charles Barber and coin designer Victor David Brenner … and that things weren’t resolved until one of them passed away! But more on that later. For now, let’s look into the 1917 Wheat Penny Value.

History of the 1917 Wheat Penny

As you can see from the table above, the 1917 Wheat Penny came in lots of varieties, none of them bearing the famous VDB! So let’s start by digging into this issue. Up until the 1900s, coins were designed by in-house mint engravers. The job was sometimes hereditary, as in the case of Charles Barber succeeding his dad, William Barber. And it was a practical position.

Yes, engravers needed artistic skills to sculpt and engrave currency. But they also needed sobriety to pick a design that was easy to make. This led them to draft conservative yet simple styles that were symbolic and meaningful without over-exerting expensive equipment at the mint. Sadly, this balance wasn’t always appreciated by the politicians … or the public.

So in 1904, President Theodore Roosevelt asked the mint to hire external artists that could make American coins prettier and more artistic. And as people in the know would later say, Charles Barber felt he was being forced to ‘systematically undo his life’s work’. He designed the prior coins and was now expected to replace them all with the work of popular artists!

Barber showed his displeasure by working against this new Lincoln Cent he so despised. And since other coin experts agreed with him, he successfully pushed his agenda. One tactic was to refute Brenner’s surname, and later his initials on the coin. But he cited rational reasons for his refusal – replacing VDB with B for Brenner would take too long and confuse people.

After all, earlier coins were already marked B for Barber, and changing the VDB to B would take 2 weeks. On the other hand, scrubbing off the VDB altogether would only take 3 days, so that’s what the mint did. Now, we’re not saying Barber had a vendetta. But he died in 1917, and VDB reappeared on the penny in 1918. Ironically, 1909 VDB coins are now premium!

Let’s share a quick lesson in minting. Coins are made by striking blanks called planchets with dense steel stamps called dies. Think of them like automated rubber stamps, except they’re made of metal. First, the designer drafts a sketch, makes a plaster, coats it in rubber to make a mold, and uses the mold to make an epoxy Galvano. The Galvano makes a master hub.

The steel master hub will then stamp a steel block to make the master die. This is later used to form a working hub. The working hub now makes a series of working dies, and these are used to create coins. Each phase involves multiple strikes for accuracy, and misalignment can occur at any stage, leading to doubling flaws like DDOs (doubles die) or off-center coins.

Since dies are extremely expensive, mint engravers emphasize simpler designs that extend the lifespan of working mint dies. However, some of the designs by external artists – like the Lincoln Penny, the Buffalo Nickel, and the Mercury Dime – punished the dies and wore them out up to three times faster! Plus, the pretty details on the coins often faded off too quickly.

This might be because designers prioritized beauty over seignorage – the difference between production costs and face value. This put mint engravers at odds with external sculptors, but officials assumed it was their artistic temperament, so they didn’t pay it much mind. And this history meant the 1917 Wheat Penny had no VDB. But it had a multi-thousand-dollar DDO!

Features of the 1917 Wheat Penny

Wheat Pennies have stayed more or less the same since they first appeared in 1909. But 1917 was the last year for non-VDB cents before the designer’s initials were reintroduced in 1918. It’s also the year that Charles Barber died. Coincidence? We think not! But controversy aside, let’s discuss the key physical features of the 1917 Wheat Penny so you can spot it in a crowd.

The Obverse of the 1917 Wheat Penny 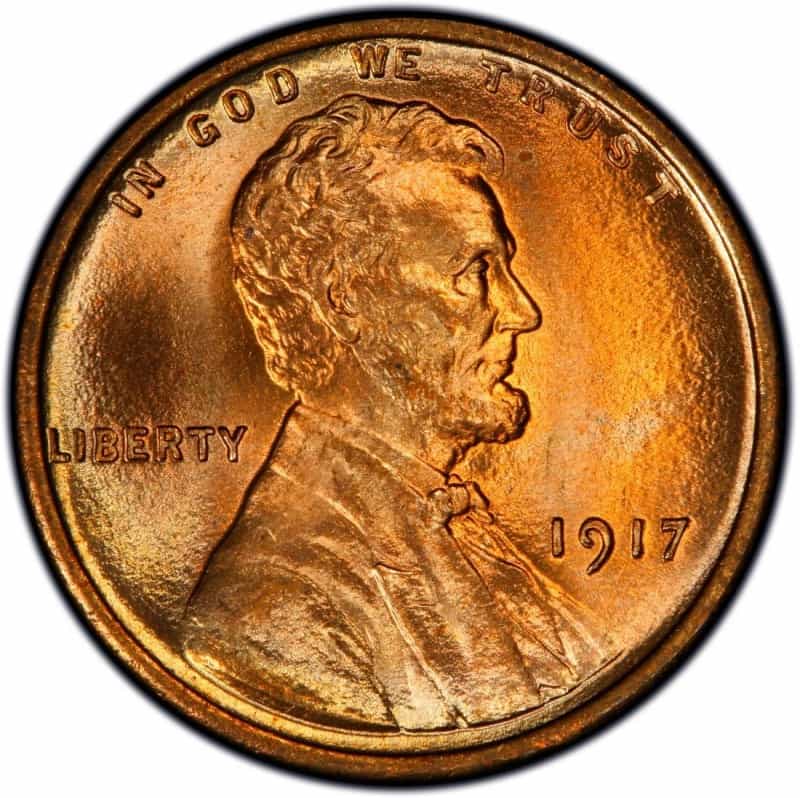 The obverse (heads side) of the 1917 Wheat Penny features a profile of Abraham Lincoln facing right. It was designed by Victor David Brenner, but as we explained earlier, his initials didn’t appear on the coin between 1910 and 1917. The top of the coin bears the legend In God We Trust, with Liberty behind him on the left. The mint date and mint mark are on the right.

The Reverse of the 1917 Wheat Penny 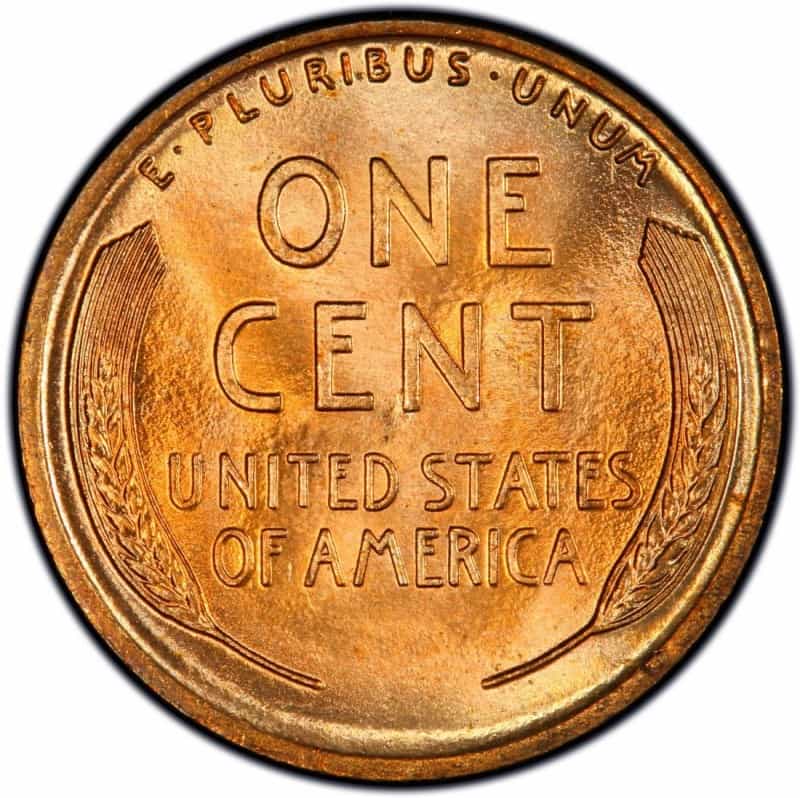 The reverse (tails side) of the 1917 Wheat Penny is dominated by a pair of durum wheat sheaves – that’s where the coin got its nickname. The legend E Pluribus Unum runs from the tip of one wheat stalk to the other, along the top of the coin. Below that is the denomination, One Cent, followed by United States of America running between the two sheaves of wheat.

Other Features of the 1917 Wheat Penny

In 1917, the Lincoln Wheat Penny was mostly made of copper – about 95%. As with other Lincoln Cents, the remainder was an unspecified mix of tin and zinc, though some years were mostly zinc (1945 and 1946) while others years were mostly tin. This penny has a diameter of 19.05mm and has a smooth un-reeded edge. The bronze 1917 version generally weighs 3.11g.

Before we get into specific mint marks, let’s go over the basics. You already know the portrait or image is called the device and the background is called the field. Those blank discs that make coins are called planchets, and the words on the coin are known as legends or mottos. Pennies have color grades: RD is the top-rated red, RB is reddish-brown, and BN is brown. It’s unclear how many DDO Wheat Pennies were made in 1917, but this variety demands premium pricing. DDO means doubled-die obverse. It’s a mint error that happens when the die shifts between hub strikes, causing a distinct doubling effect that transfers onto every coin minted with that flawed die. In this case, the DDO is visible on the legend and the date. 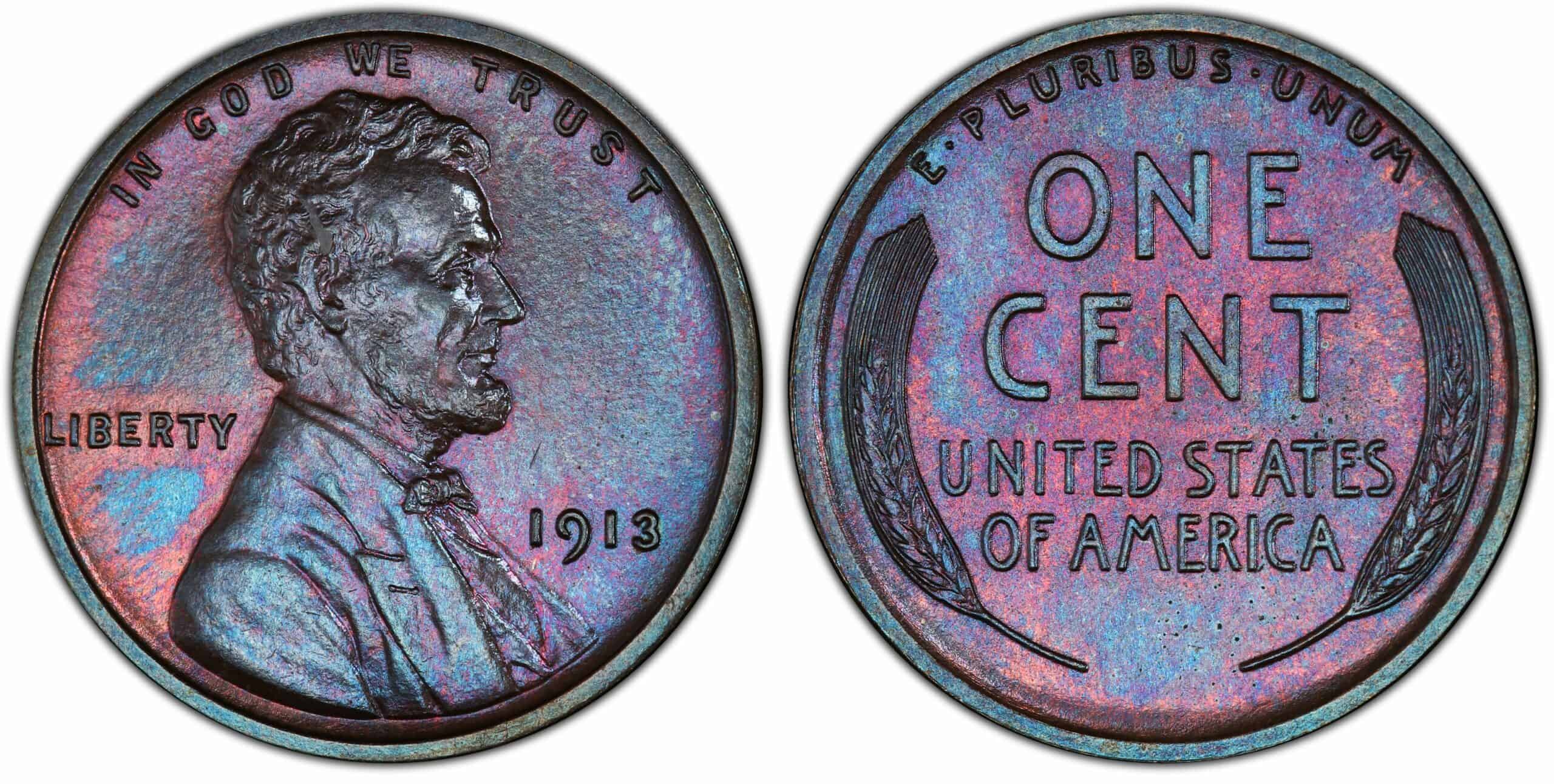 Usually, a proof coin is minted on a planchet that was pre-burnished to give it extra shine. The die also gets a special rinse that keeps the device deeply frosted. These two extra steps ensure that those first 50 to 100 coins have a drastic contrast and are graded Deep Cameo or Ultra Cameo while the less shiny ones are graded Cameo. But Matte Proofs are different.

Because the Lincoln Cent had such a curvy design, it was hard to pre-polish the planchet. Instead, they used the French system of matte proofing, selecting high-quality untreated dies and applying extra pressure at every strike. Each die had a shorter run than business strike dies to maintain clarity. In 1917, several of these proofs are said to have been struck illegally.

Only one is known to exist, and it hasn’t been graded or verified. But samples occasionally pop up on eBay, and in December 2022, the asking price for the 1917 (P) Matte Proof Wheat Penny was $2,500. Since no proofs were officially made that year, the coin attracts a lot of interest and is prone to counterfeiting, so talk to an expert if you plan to purchase this cent. The San Francisco Mint made 32,620,000 Wheat Cents in 1917. Curiously, none of them were proofs, and no further proofs were made until 1936. Also, before 1917, the US Mint only made Matte Proofs. This was due to the problematic rounded relief of Lincoln Cents that we mentioned above. And all these Matte Proofs were made in Philadelphia, not San Francisco. Ordinarily, a 1917 Wheat Penny is worth its face value of 1 cent, though you could get two or three more from the coin’s melt value if the spot price of copper is particularly friendly that day. But something that truly adds value to these coins is a verified error. The right mint mistake could shoot your 1-cent coin up to $5,000! Let’s look into some recognizable ones.

Coins are minted from dies, which are minted from hubs. And all these templates have to strike multiple times to ensure all the details are replicated correctly. Sometimes, the blank shifts a bit between strikes, and that can cause an off-center error. In this case, the second strike was 15% off-center, and in AU 58, the double strike misalignment raises the resale value.

FAQs About the 1917 Wheat Penny

1917 Pennies are over a hundred years old but they’re not especially rare. But the 1917 DDO Penny is harder to find, and by December 2022, only three were listed for sale. Their prices can go as high as $6,500 in mint states, while non-error coins in high grades are cheaper.

How Much is a 1917 Copper Penny Worth Today?