You probably expect that the 1907 Indian Head penny value is high because of its age and collectability, but it is not always the case. Despite some highly-rating pieces that can cost tens of thousands of dollars, most coins struck this year are worn-out and cheap.

Plus, record mintage makes them abundant on the coin market. However, these pieces are still over a hundred years old, so most collectors like having them in their collections.

History of the 1907 Indian Head Penny

At the end of the 18th century, the US government didn’t allow using coins made of any metals other than gold and silver as legal tender. In that period, only coins made of copper in circulation were large cents, but it was forbidden to use them for paying taxes.

During the 1850s, the US Mint reduced the penny size because of fluctuations in the copper price. The first small-size penny was the Flying Eagle, produced from 1856 to 1858. However, difficulties with minting such a complicated design led to its replacement with the new coin, the Indian head penny.

The chief engraver J. Barton Longacre designed the Indian Head penny, the second American small cent, produced from 1859 to 1909. Even though the idea was to create a coin representing an Indian chief, the obverse actually showed Lady Liberty wearing a headdress.

Many collectors believe that the model for this image was the designer’s 12-year-old daughter, but it is questionable. On the other hand, Longacre claimed that a Crouching Venus statue from the Vatican was the model he had used.

In the beginning, the reverse showed a laurel wreath, but an oak wreath and shield replaced it in 1860. The following change was in composition. In 1864, the US Mint increased the copper percentage and replaced nickel with tin or zinc.

Interestingly, only the Philadelphia mint minted these coins during the entire period. The only exception was pieces struck in San Francisco in 1909.

At the turn of the century, the Indian head pennies mintage rapidly increased to help meet growing demand. With 108,138,618 minted coins, the 1907 Indian head penny was the highest production year in the series.

Unfortunately, most of these coins have been damaged or lost over time, and only rare pieces are in the mint state nowadays. Despite that, these pennies are collectible, thanks to their historical significance and age.

Features of the 1907 Indian Head Penny

The 1907 Indian head penny is a beautiful old coin, and many collectors want to add it to their collections. If you are one of them, you can purchase one for an affordable price and enrich your collection with this valuable and one of the most beautiful pieces of American coinage.

The obverse of the 1907 Indian head penny 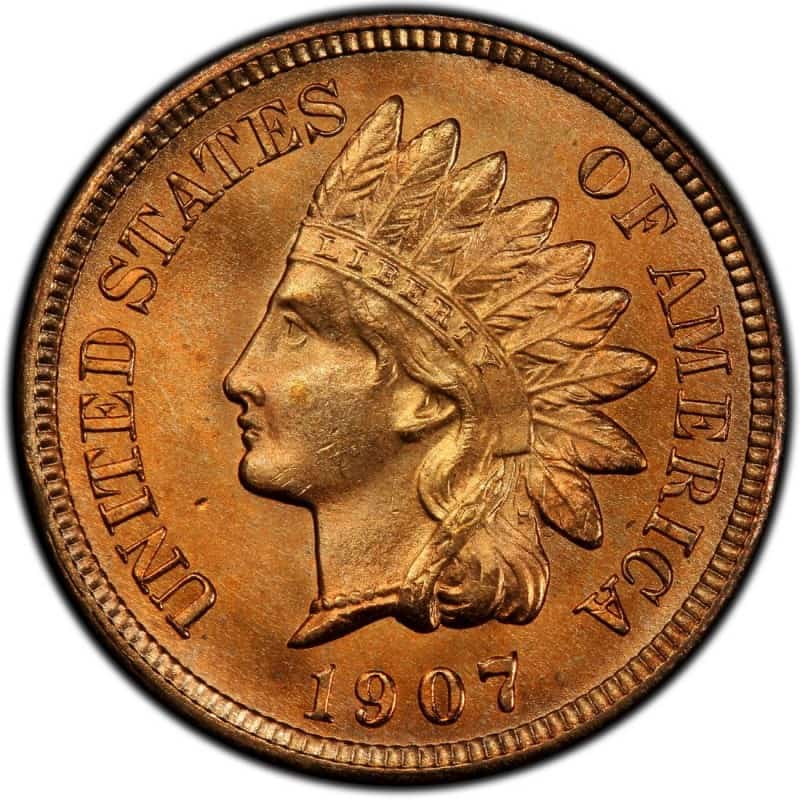 This beautiful copper coin depicts an American Indian image wearing an original headdress. It is believed that no real person was the model for this portrait.

Some collectors claim that it is actually Lady Liberty, an imaginary character with an Indian headdress on her head. The UNITED STATES OF AMERICA surrounds a centrally positioned portrait on both sides, while the DATE, 1907, is struck along the bottom rim.

The reverse of the 1907 Indian head penny 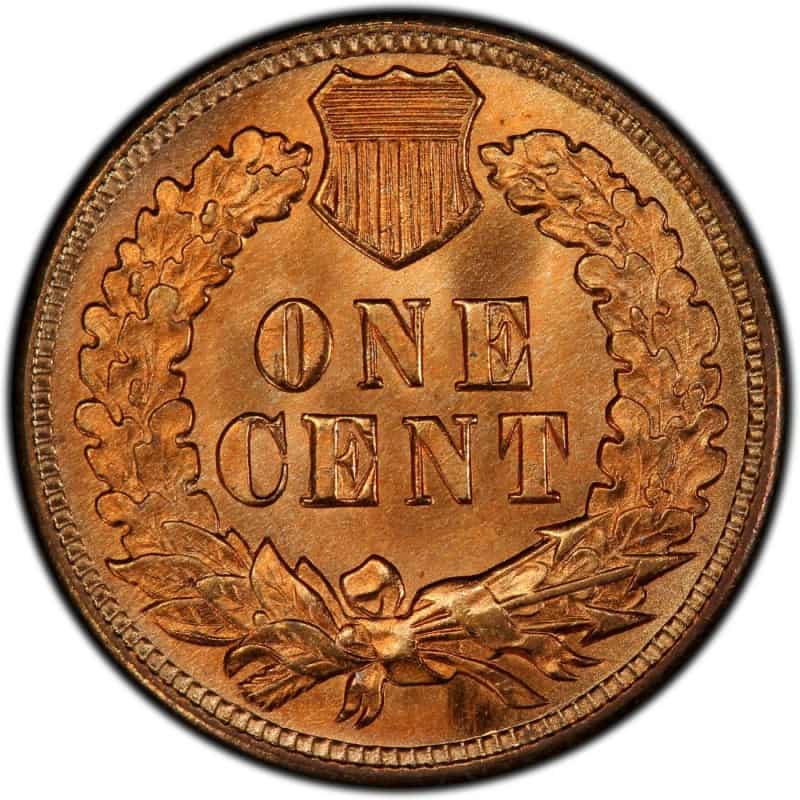 The elegant coin reverse has the denomination ONE CENT in the center with a shield on the top. You can also see a richly interlaced oak wreath along the rim with three arrows at the base. They were tied with a stylish ribbon.

Interestingly, the first Indian head pennies contained a laurel wreath, but it was changed because of issues with minting.

Other features of the 1907 Indian head penny

The Philadelphia mint was the only one that produced Indian head pennies in 1907. Among 108,138,618 produced coins were those from the regular strikes and a low number of proofs. 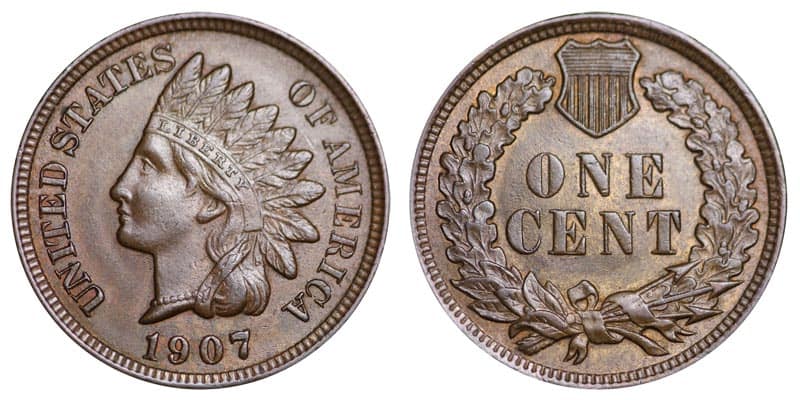 In 1907, the Philadelphia mint struck 108,137,143 pennies without the mint mark. Surprisingly, many of these coins survived over a century, and you can find them on the market. Moreover, their price is pretty low for such old pieces.

However, you should be aware that the price directly depends on the preservation level, and finding any of these pennies in perfect condition is a challenging task. Plus, you can recognize them in three colors, and only red-toning specimens are highly collectible and desirable among collectors.

For instance, you can find a modest 1907 penny with brown toning in circulated condition for $1 to $27.50. Even those in the mint state won’t cost you more than $155. On the other hand, red-brown pieces are available only in the mint state and are typically worth $50 to $475, depending on the preservation level.

The most expensive 1907 Indian head penny ever sold at an auction is the unique coin with MS 67+ rating. This unbelievably beautiful specimen with red toning reached $63,000 at Heritage Auctions in 2019. 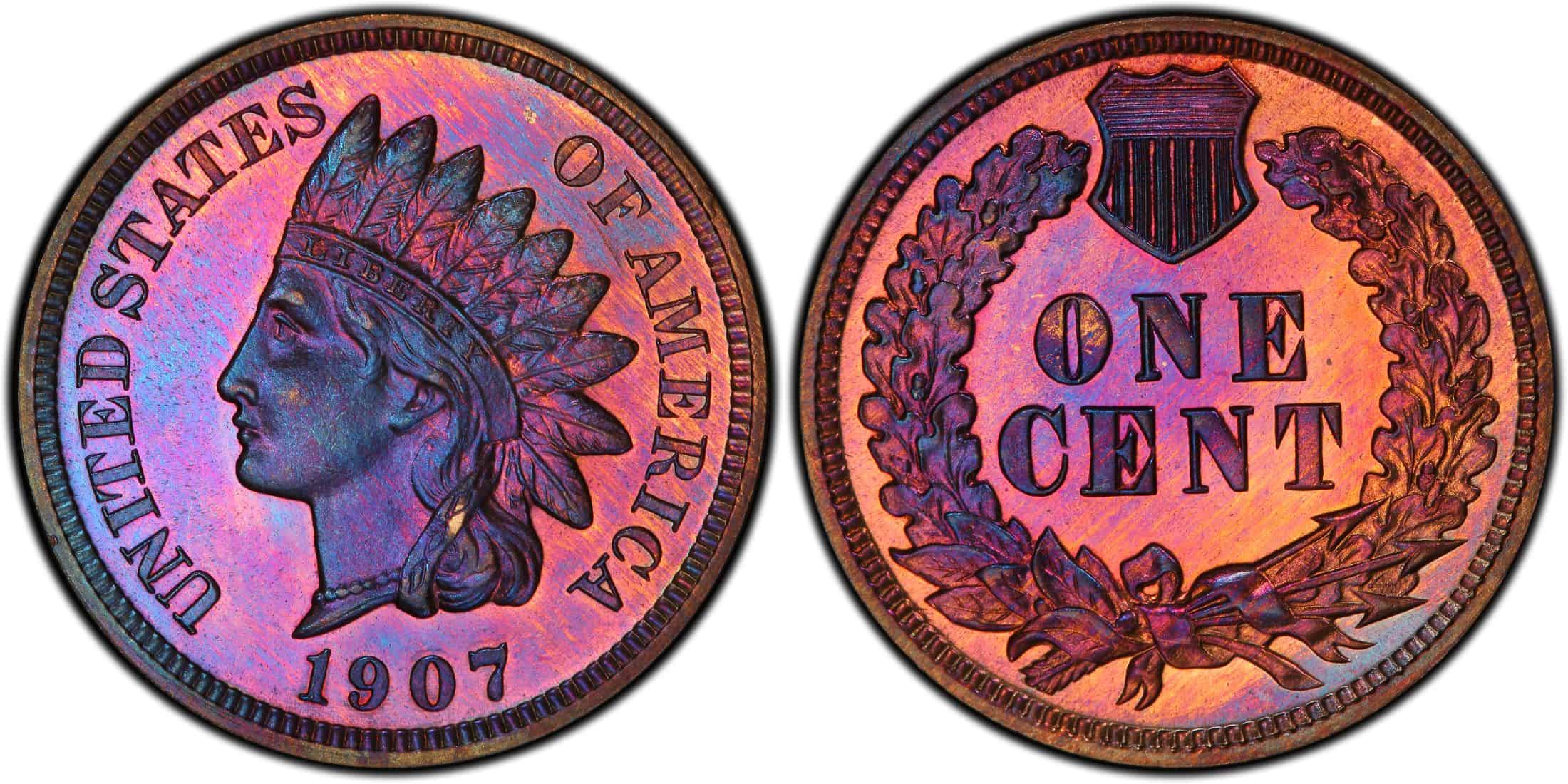 The Philadelphia mint minted 1,475 Indian head proof pennies in 1907. Such a low mintage makes these coins rare, particularly in the highest grades. While specimens with brown toning cost approximately $110 to $1,980, red-brown-toned pieces are always more costly.

The most collectible, impressive red-toned, sharply struck specimens come with a price range of $200 to $1,440. Unfortunately, it is almost impossible to find pieces in a grade above PR 65.

Therefore, you shouldn’t be surprised that one collector paid $22,913 for the unique 1907 PR 67 RD Indian head penny. He didn’t have a second thought when this gem appeared at Legend Rare Coin Auctions in 2019.

Besides color variations, it can be challenging to find any 1907 Indian head penny error, despite relatively high mintage.

Sometimes, you can find the 1907 Indian head penny with double minting, particularly in digits in the date. Some pieces also have such a doubling in other design parts, but most are visible only under a magnifying glass.

Since such specimens are scarce, you should count on a high price for any found. They will cost you at least four times the regular coin value in most cases.

You can sometimes come across the 1907 Indian head penny with missing letters in inscriptions, but you should be careful with such coins. It is crucial to differentiate between an error and a worn-out piece.

In most cases, only an expert can make such a decision. However, it is worth the effort because these pennies often cost as much as $1,000 each.

In rare cases, you can find the 1907 Indian head penny with the die cud, a die defect variation with a raised metal part. This unintentional bump appears because the die is with a gouge, allowing the metal to fill the gap during minting. These coins are always valuable, but the final price depends on the error size.

FAQ about the 1907 Indian Head Penny

Surprisingly, the 1907 Indian head penny is not a rare coin, despite its age. However, finding a piece with desirable red toning in the highest grades can take time and effort. Therefore, such a coin reaches the highest prices at auctions.

Which 1907 Indian head penny is worth a lot of money?

How much is 1907 No Mint mark Indian head penny worth?

The 1907 Indian head penny price depends on the condition and color. For instance, one brown coin in lower grades costs $1 to $27.50, while those in the mint state are worth $155.

What is the most pricey Indian head penny?

The 1877 MS 66 Indian head penny is the most expensive piece in the series ever sold at an auction. One collector added it to their collection for a fantastic $149,500 in 2007.