Do you know what the penny’s design was before it had Abraham Lincoln’s profile on it? If you don’t, then you’re in luck, because this blog post will cover everything you need to know about what’s known as the Indian Head penny, specifically the year 1906.

Without further ado, let’s check out this coin!

While the United States of America was celebrating its 130th year of independence, the 1906 Indian Head penny was being minted. Let’s learn a little about the history of this interesting coin.

The Indian Head penny is one of the most valuable coins from the early 1900s and also even earlier. It has a face value of one cent, but can be worth much more depending on its condition and rarity.

First issued in 1859, these pennies feature an Indian head on the obverse side and a laurel wreath on the reverse side. Over time, different errors occurred for various pennies, which adds to the value of certain coins.

The design for the Indian head penny was created by the chief engraver of the Philadelphia US Mint location, James Barton Longacre. Born and bred in Pennsylvania, he had already created the designs for several one dollar gold coins, as well as a twenty dollar coin and a three dollar coin, among others. After a penny design of his that included an eagle proved to be too difficult to mint, he hurriedly came up with another design – the Indian girl head with the ceremonial bonnet.

There is some question as to who modeled for the Indian head, but most believe it was James Barton Longacre’s daughter, Sarah, who would have been about twelve at the time. The penny was originally created out of a composition of copper and nickel, but by the time 1906 rolled around, these pennies had been composed of copper, tin, and zinc for a few decades.

It was produced until 1909, thirty years after Longacre’s death in 1869, when it was replaced by Victor David Brenner’s iconic Lincoln cent to commemorate Abraham Lincoln’s 100th birthday.

Features of the 1906 Indian Head Penny

Now that you know a little about the history of the 1906 Indian Head penny, let’s take a look at some of its features, including the design on the obverse and reverse, the metal composition, its lack of a mint mark, and its size and weight.

The Obverse of the 1906 Indian Head Penny 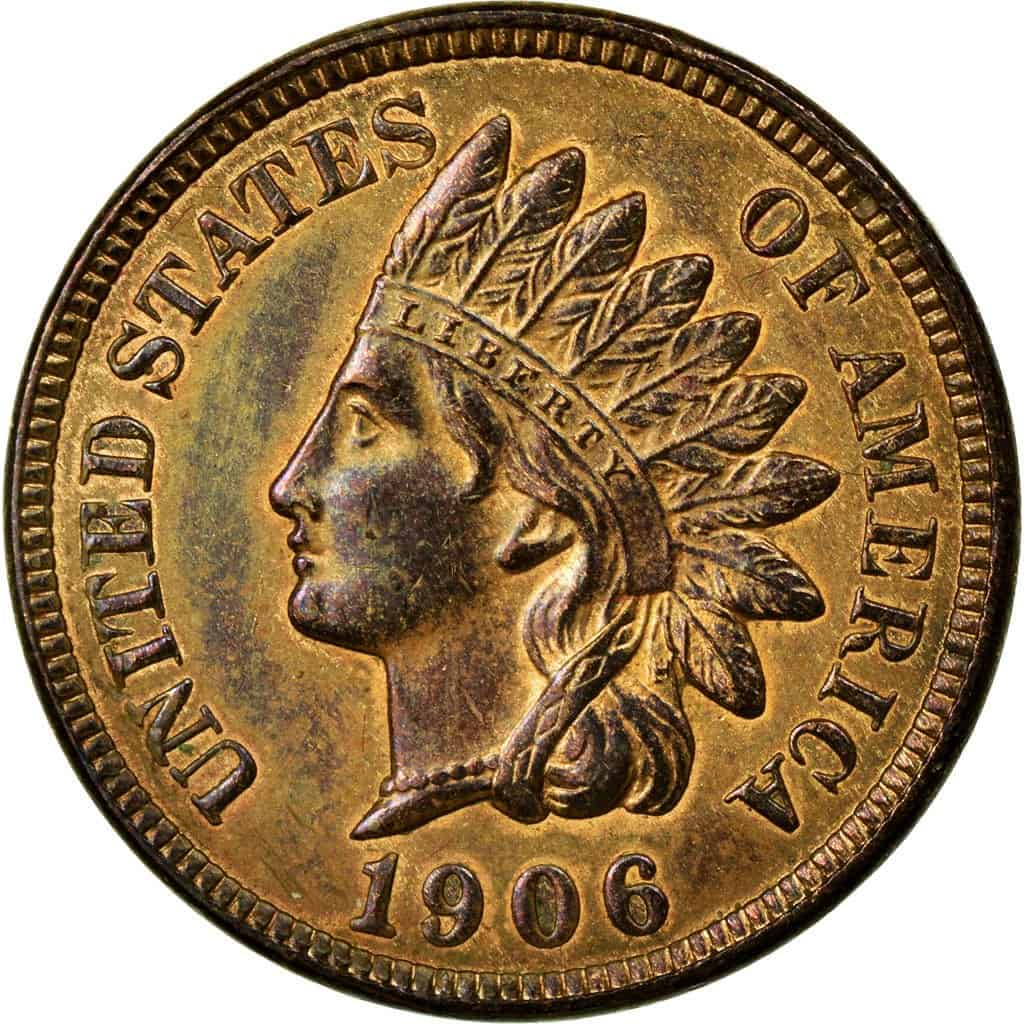 The 1906 Indian Head penny has a unique design on both sides. On the obverse (front) side, you will find an Indian head with a feathered ceremonial bonnet in her hair. As mentioned earlier, it is believed that this design was modeled after Longacre’s own daughter, Sarah.

Her regal chin is lifted bravely and facing left, while a string of pearls encircles her neck. The word “LIBERTY” is written on the headband of the bonnet that encircles the girl’s head, similar to many coin designs from the same era that includes “LIBERTY” on Lady Liberty’s crown.

To her left is the phrase “UNITED STATES,” and to her right is the phrase “OF AMERICA.” Below her is the date, “1906.” The edge of the coin is fluted to give it a more elegant and classic feel.

The Reverse of the 1906 Indian Head Penny 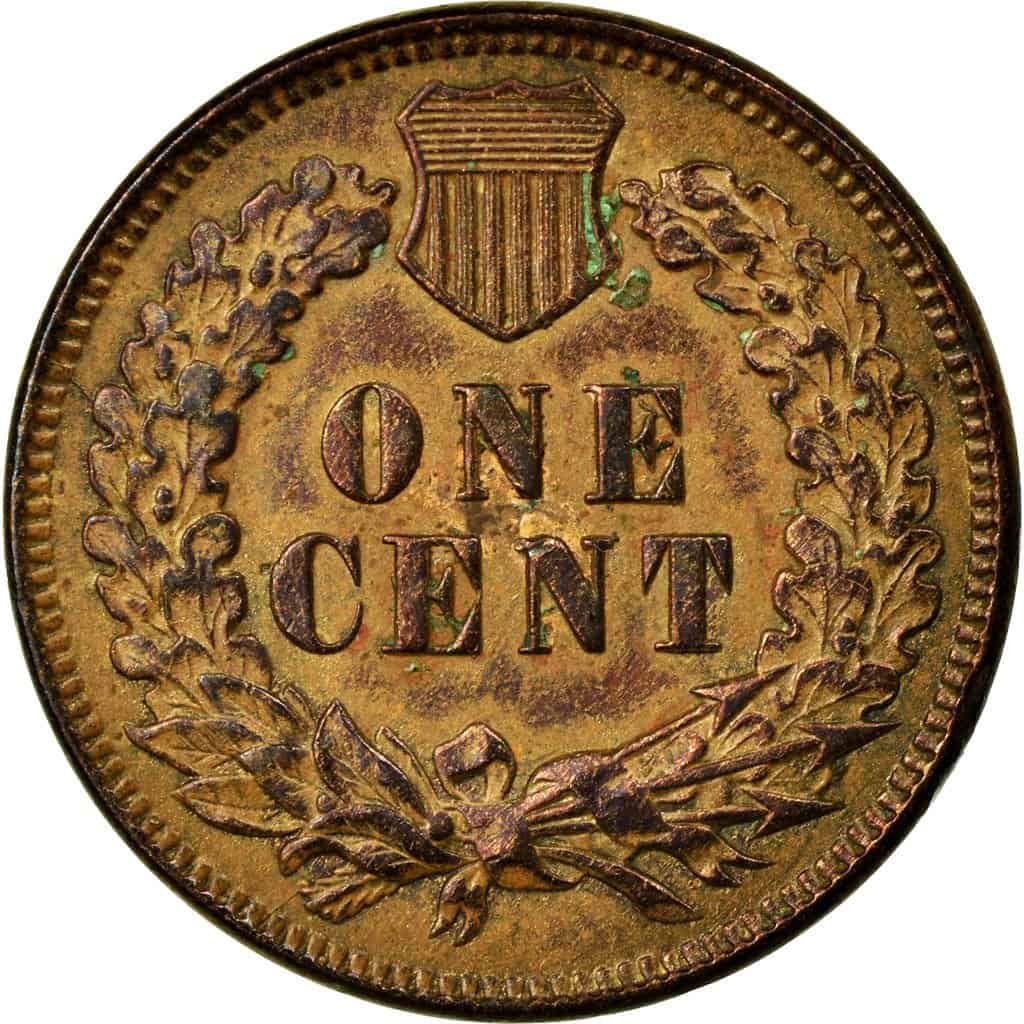 The reverse (back) side of the 1906 Indian Head penny features a laurel wreath surrounding the words “One Cent” in the center.

The laurel wreath circles to the top, where it stops at the image of a shield at the top center of the coin. At the bottom center, the laurel wreath is tied with a ribbon. Also tied there is a group of arrows to signify America’s strength.

Again, the edges of the coin are fluted, just like the front.

Other Features of the 1906 Indian Head Penny

Beyond the design of the penny, there are a few other features you should know about.

Unlike some other coins from this era, this particular penny doesn’t have a mint mark, which means that it came from the Philadelphia US Mint location. Many coins come from multiple mint locations; however, the 1906 Indian Head penny was only minted in Philadelphia.

The 1906 Indian Head penny is 19 millimeters in diameter and weighs 3.11 grams, just like other pennies that have come after it.

Finally, let’s talk about the value of your 1906 Indian Head penny – the moment you’ve been waiting for.

The value of a 1906 Indian head penny will depend on its condition. The condition of a coin is graded on a scale of “Good,” to “Fine,” to “Extremely Fine,” and all the way to “Uncirculated.” Coins that are in better condition will be rarer and therefore, more valuable – especially a coin as old and iconic as the 1906 Indian Head penny.

Let’s take a look at the value below. 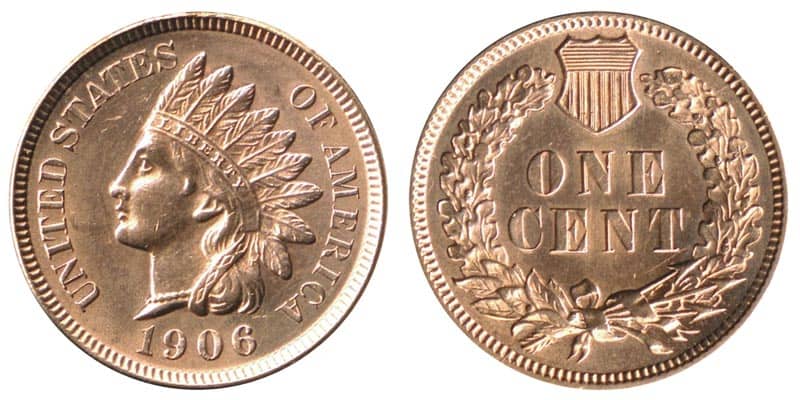 As mentioned, the 1906 Indian Head penny was minted in Philadelphia, USA and boasts a mintage figure of 96,020,530 coins. That’s nearly 1 million coins produced that year. These coins are worth quite a bit more than their face value of one cent.

You may just even get lucky – if you find a near-perfect condition penny from 1906, as one person did, you may be able to sell it for thousands of dollars at auction. This particular person sold their Uncirculated condition penny for an impressive $23,000! 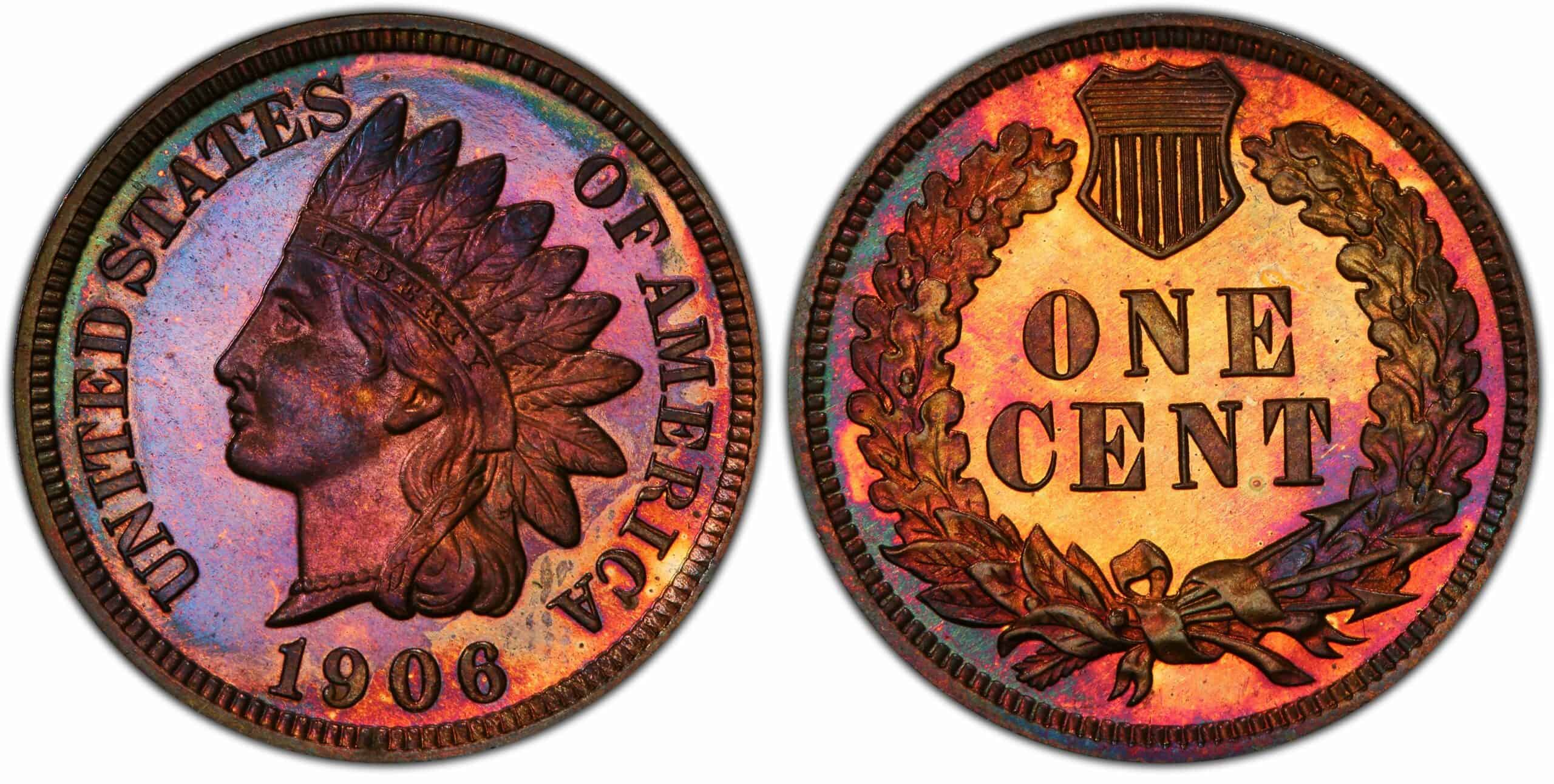 It’s important to note that the 1906 Indian Head pennies were also produced in a “Proof” version.

You may be wondering what a Proof coin is. In case you have not heard that term before, it means coins that were specially made for collectors and not for business transactions, like the typical minted coin. Proof coins generally have a mirror-like finish and are usually a bit more valuable than their “non-proof” counterpart.

Just like the “no mint mark” pennies from 1906, the Proof Indian Head pennies were minted in Philadelphia. There were typically somewhere between 1,000 and 3,000 Indian Head Proof pennies minted each year, and in 1906, there were 1,725 created, so not very many.

This is why the value of Proof pennies goes up significantly. For example, a 1906 Indian Head Proof penny is said to be worth around $160. And if you try to sell a near perfect one at an auction like one person did, you might just walk away with $21,000!

Talk about a game changer!

There are some rare error coins that can be found from this year that significantly improve the value of the 1906 Indian head penny. Errors can include (but are not limited to) double-struck coins or off-center striking errors where part of the design is not fully visible.

These coins are valuable because they are so rare, and some can fetch thousands of dollars depending on their condition!

So if your 1906 Indian Head penny looks a little bit funny or off – it might be worth having it checked out, as you could have a very valuable error coin in your hands.

Let’s look at a few of the Indian Head pennies from 1906 that have sold at auction recently. 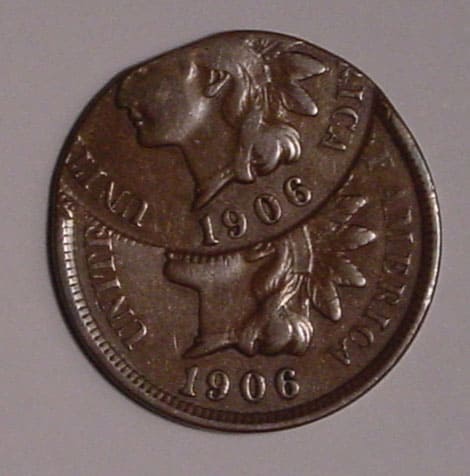 One of the most well-known errors that can be found on Indian Head pennies is a double strike error where the coin was struck twice by a die. However, this one is even more interesting, as it is not only struck twice – it also flipped over before being struck the second time! This means that if you look closely at the girl’s face, you can just barely make out the outline of the word “ONE,” which is supposed to be on the opposite side of the coin.

This 1906 Indian Head penny with a double strike and flip over error sold at auction for over $690! Not bad for a one-cent piece!

Compare this to another double struck 1906 Indian Head penny that sold for only $20 at auction. This is because the grade was so low on this particular coin – it would have sold for much more if it had been in better condition. 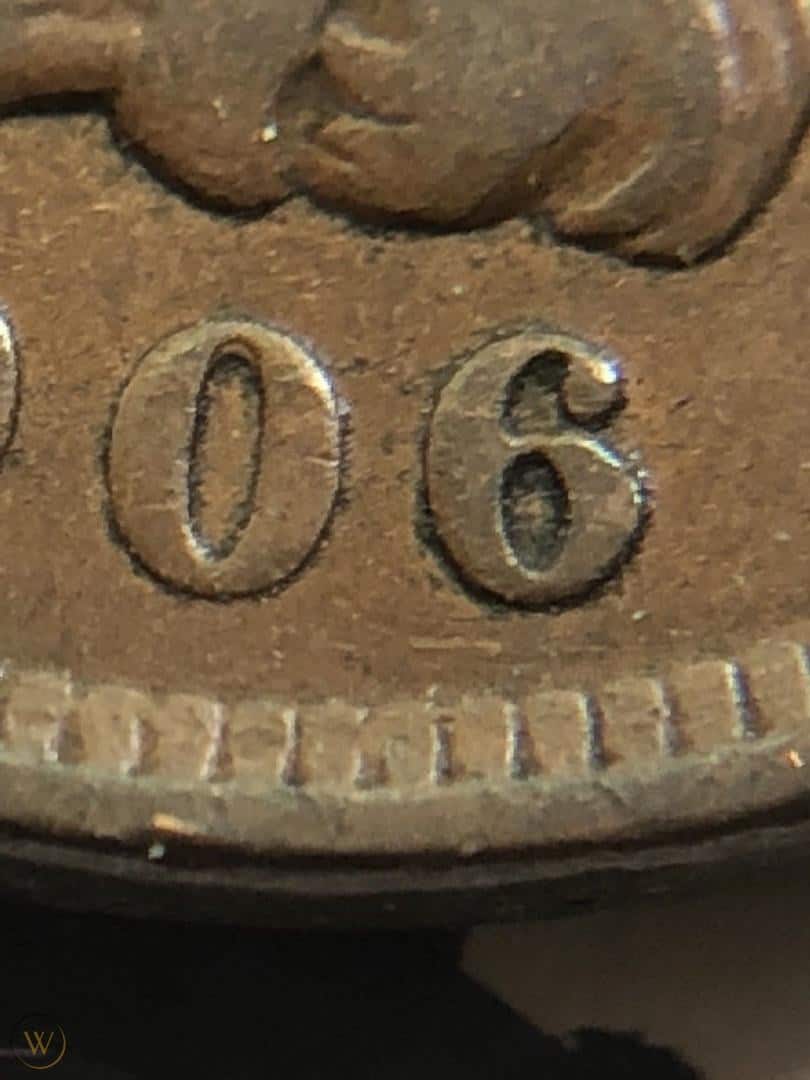 This 1906 Indian Head penny has an interesting error known as a “repunched date,” which means that the date on the coin was struck twice, on top of each other, causing one to be misaligned.

While errors definitely increase the value of these coins, the condition of the coin is what makes the biggest difference.

You may have some questions about the 1906 Indian Head penny. Let’s take a look at a few of them:

If I Find a 1906 Indian Head Penny, Should I Clean It Before Getting It Graded?

No! Cleaning a coin can damage it and significantly decrease its value, so it’s best to leave cleaning coins to the experts. Most coins that are found in pocket change have been circulated at some point, so they may look a bit dull or dirty – this is perfectly normal.

The 1906 Indian head penny is a valuable coin with a lot of history behind it. It is highly sought-after due to its low mintage and potential errors. The value of the penny depends on its condition, with Uncirculated coins being the most valuable.

If you are lucky enough to find one in pocket change or at an auction, it’s definitely worth adding to your collection. Or if it appears to be in very good condition, it may be worth having it graded and checked out for any potential errors that could increase its value significantly! Good luck!

Have you ever seen an Indian Head penny in person? Do you own any? Let us know in the comments below!