Have you found a penny from 1903, with its distinctive image of Lady Liberty wearing a Native American headdress? If so, you might be wondering whether it’s valuable. Well, you’ve come to the right place to find out!

We’re going to look at what’s known as the 1903 Indian Head penny. We’ll find out about its history and design. And we’ll discover what separates an ordinary coin from something that’s rare and valuable.

So if you’re ready, let’s dive in!

History of the 1903 Indian Head Penny

The Indian Head penny is also known as the Indian Head cent. It gets its nickname from the image on the obverse. That depicts Lady Liberty wearing the distinctive headdress of a Native American warrior.

The coins were first struck for circulation in 1859. The design was the work of James Barton Longacre, who was then Chief Engraver at the Mint. It was a replacement for the cent known as the Flying Eagle, which had proved difficult to strike.

In the past, the public had expected the metal used in the coins to be worth close to its face value. But as copper prices were rising, the production of large pennies became ever more expensive.

When the Flying Eagle was introduced, the penny was made smaller. The coins were, in fact, the same diameter as the modern cent, albeit thicker. And the copper content was changed too, from pure copper to 88 per cent copper and 12 per cent nickel.

The Indian Head penny introduced in 1859 followed the same format. But in 1864, the composition changed. The copper content was increased to 95 per cent, with the remainder a mixture of tin and zinc.

That reduced the weight of the coin from 4.7 to 3.11 grams. The recipe remained unchanged for the rest of the series.

The details of the design also changed over the years. The reverse of the 1859 Indian Head pennies featured a simple wreath of laurel leaves. In 1860, that was changed to a wreath of oak leaves and a shield.

After the Civil War, production of cents was cut back. But it increased again in the early years of the twentieth century, fueled by a growing economy. The gaming industry was growing too, with more cents needed for penny arcades.

But until 1907, legislation forbade any mint facility except Philadelphia from striking cents. That changed in 1908, with the first small mintage of San Francisco Indian Head pennies.

The series came to an end in 1909. New pennies were struck to commemorate the centenary of Lincoln’s birth. The Lincoln penny is still in production today.

Features of the 1903 Indian Head Penny

The Obverse of the 1903 Indian Head Penny 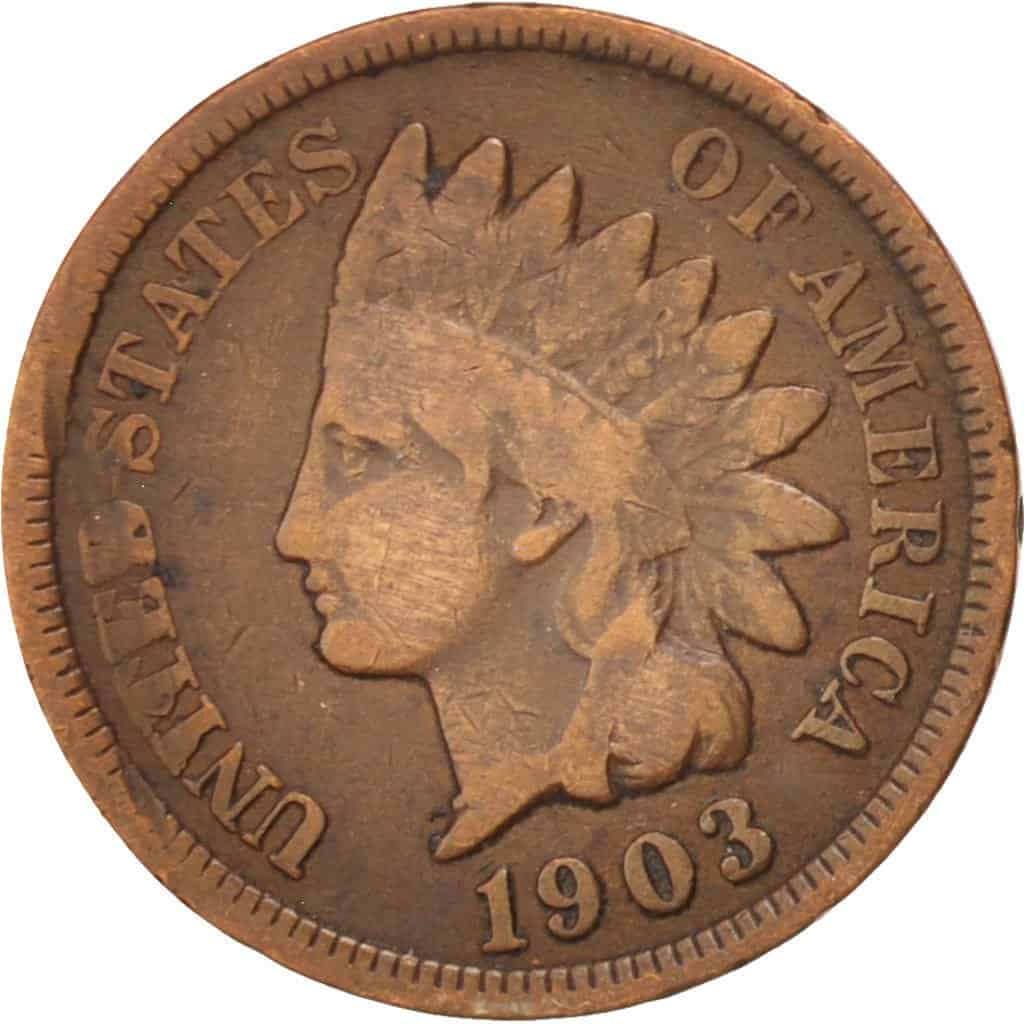 The obverse of the 1903 penny shows the head and neck of Lady Liberty. But the most striking thing about the portrait is her headgear. She is depicted wearing the traditional feathered headdress of Native American braves.

Placing such a headdress on the head of a woman, and a woman with Caucasian features at that, has been the cause of some controversy. Even at the time, the Mint Director, James Ross Snowden commented on what he called its “absurd incongruity”.

Nevertheless, the coin was immensely popular with the American public. Indeed, some art historians have claimed it is the most beloved of all American coins.

Lady Liberty is shown in profile facing left. The band at the base of the headdress is inscribed with the word “Liberty”, leaving us in no doubt who she is. The country name appears along the coin edge. “United States” is on the left side of Liberty’s portrait, “Of America” is on the right.

At the bottom, is the year. And a beaded border surrounds the whole design.

The Reverse of the 1903 Indian Head Penny 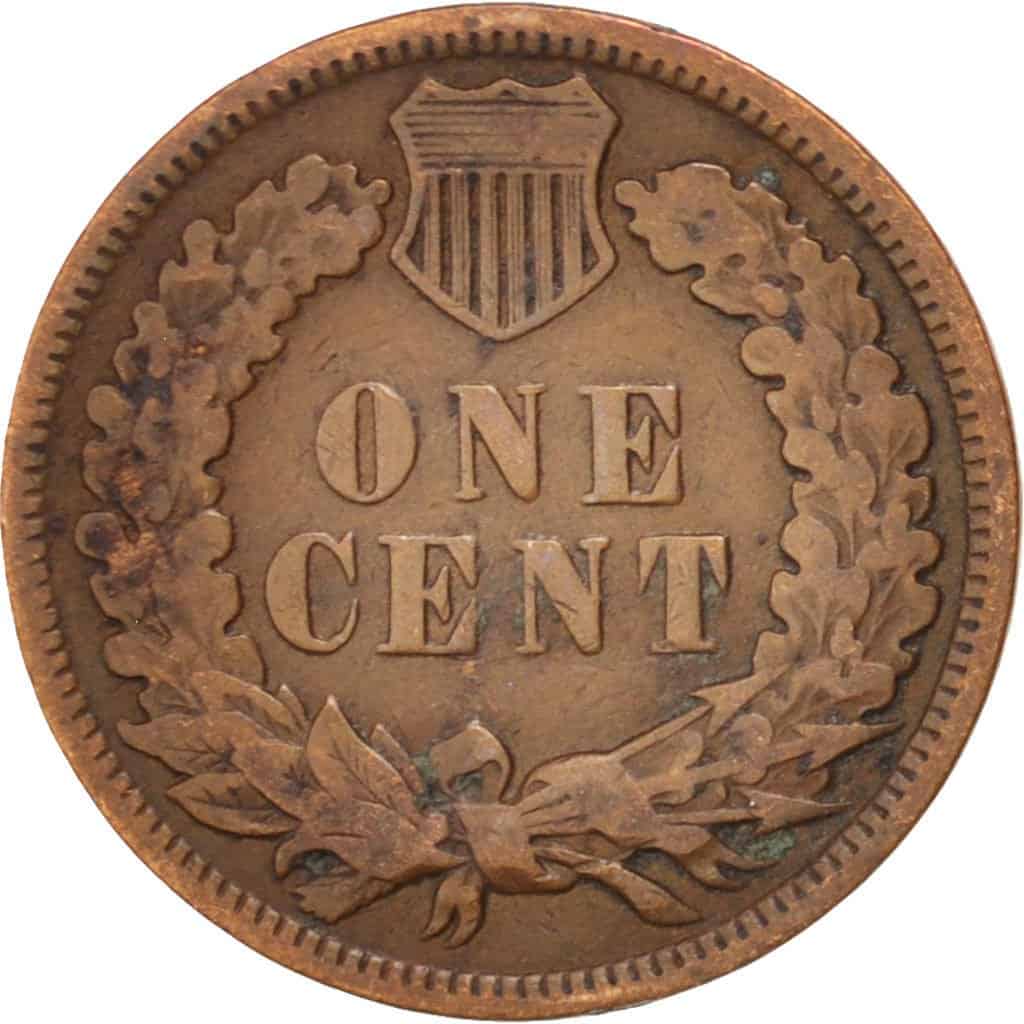 Four different designs of a wreath of leaves were originally put forward for the Indian Head penny.

Snowden’s first choice was a laurel wreath, probably more for reasons of practicality than artistic merit. The laurel wreath had the lowest relief of any of the designs, meaning the coins would be easier to strike.

Longacre produced patterns for the new coins in 1858, and these had the laurel wreath on the reverse. Small changes were made to the first coins struck for circulation the following year. These had the leaves in bunches of six, rather than five as in the pattern coins.

But in 1860, the design changed to a wreath of oak leaves accompanied by a small shield at the top. (There are also some rare pattern coins dated 1859 with this design.) That’s the same design as shown on the reverse of the 1903 penny.

Various different reasons have been proposed for the change. Some state that it was to allow for better definition of the feathers on the obverse. Others say the oak leaves, symbolizing strength, were considered a better reflection of the national character.

The only text on the reverse is the denomination, written as “ONE CENT” over two lines.

Other Features of the 1903 Indian Head Penny

Since the 1903 Indian Head penny was minted only in the original mint facility, Philadelphia, none carry mint marks.

The coins measure 19 millimeters across and weigh 3.11 grams. The edge is plain.

The 95 per cent copper composition means that the color changes over time. When brand new, copper is a warm red shade. But as the coins are handled and exposed to oxygen in the air, the color changes to brown.

Red coins must be red over at least 95 per cent of their surface area (i.e. including both sides). Brown coins must be brown over the same area. And red and brown coins are those that fall somewhere in the middle. 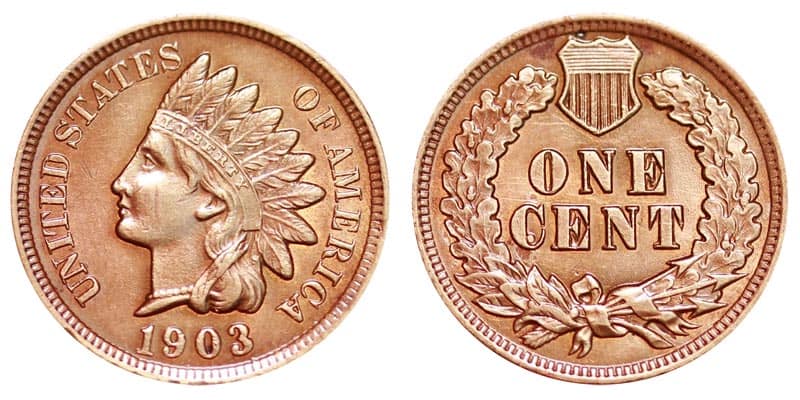 Just over 85 million Indian Head pennies were struck in Philadelphia in 1903. The majority of these are brown, and they’re generally the most affordable. But they are still collectable coins. And at the highest grades, they can be worth significant sums.

A coin in extremely fine condition, graded XF45, is valued at $20 by the independent coin grading agency the PCGS. That grading means it’s a circulated coin but has minimal signs of wear. That could take the form of minor rubbing to the highest parts of the design, or hairline cracks.

Prices for uncirculated coins are higher. A brown 1903 Indian Head half penny graded MS60 (mint state) is worth about $54. That value increases to $150 for an MS65 example. That’s the lowest grade to be termed “gem quality”.

The finest quality brown Indian Head pennies from this mintage are graded MS66. The PCGS has assessed three coins at this level, and they’re each valued at $550.

Red and brown Indian Head pennies occupy the middle ground in terms of collectability. The PCGS only records populations and values for 1903 examples graded MS62 and above.

But at just half a point higher, Indian Head pennies are considerably rarer. At MS66, the value breaks into four figures, at $1,250. Only one coin has been graded finer. That’s rated MS66+, but it’s never changed hands to determine a value.

Red pennies are the rarest of all. Since handling changes the color of the copper, most are by definition uncirculated coins. And the PCGS population of red 1903 Indian Head pennies begins at MS62, with examples valued at $110. 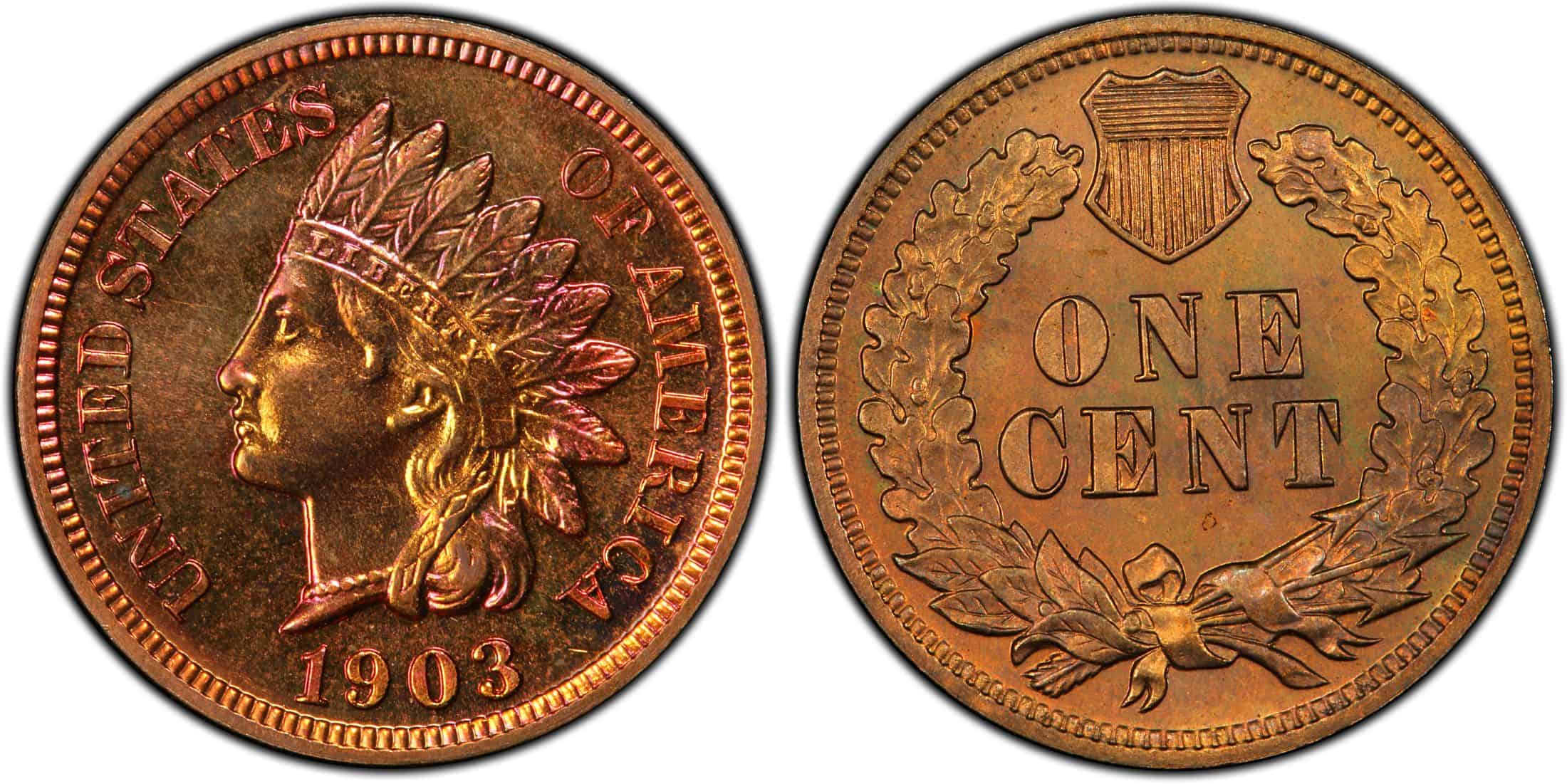 In addition to the coins produced for circulation, the Philadelphia mint struck 1,790 proof 1903 pennies. These were struck using specially prepared dies on hand-selected and carefully polished planchets. They were primarily aimed at collectors, and they are beautifully detailed.

As with business strikes, proofs can be designated brown, red and brown, or red. But some are also classified as “cameos”. These are coins that have an appealing contrast between glossy fields and frosted devices.

You’ll be looking at paying upwards of $100 for any proof coin. The lowest quality proofs graded by PCGS are PR60 brown coins, and they’re valued at $130. 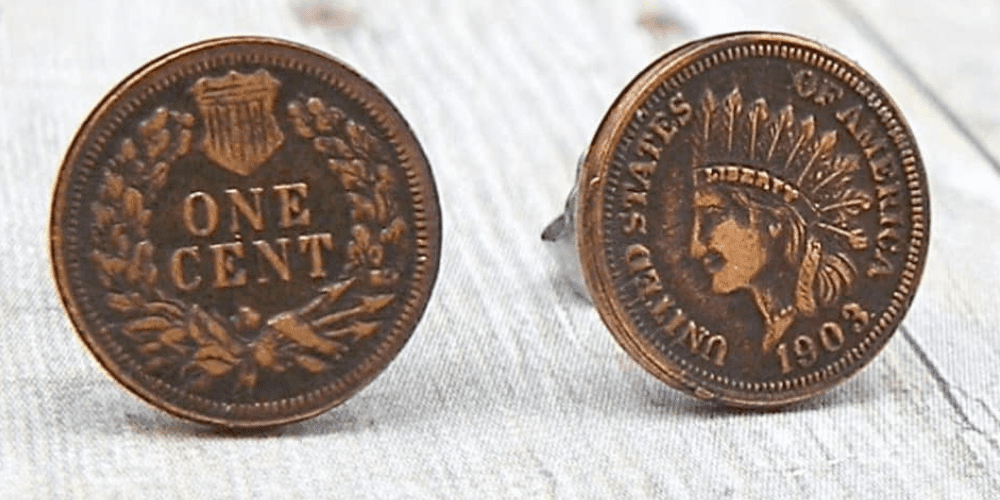 Broadstruck coins are those that were struck when the planchet wasn’t held securely in place by the collar. As a result, the metal spreads out beyond the normal boundaries. The design on broadstruck coins may be either centered or off-center.

A broadstruck 1903 Indian penny was presented at auction recently. It was in relatively poor condition, graded VG8 (“very good”) and was classified brown. It sold for $55 – still not a bad return for a 1 cent coin.

Another type of striking error is the double strike. This is when a coin that’s already been struck finds its way back into the coining chamber. And a flipover double strike is – you’ve guessed it – when it flips over in that process. As a result, the second strike is at 180 degrees to the first.

An Indian Head penny with this error sold at auction for $275. And that was despite the fact that it was a brown coin graded only VG8.

That coin was graded MS63 brown by the NGC. And it sold at auction for over $900.

This YouTube video from Couch Collectibles shows you examples of all these error coins and more.

Pretty much any Indian Head penny is worth significantly more than its face value. But some are considerably rarer than others.

As the quality of Indian Head pennies increases, so they become harder to find. Uncirculated (mint state) coins are the rarest. And in terms of color, red pennies are rarer than red and brown, which are in turn rarer than brown coins.

There are also a number of interesting error coins amongst 1903 Indian Head pennies. These include coins with repunched dates, and striking errors like broadstrikes, double strikes and off-center strikes.

Lincoln pennies didn’t start to be produced until 1909. That year marked the bicentenary of Lincoln’s birth, and the new coins were made to honor the former president. 1903 pennies are known as Indian Head pennies.