The 1900 dollar is one of those known as Morgan dollars. But is there anything special about that year’s mintage? And if you have one of those coins, how much might it be worth?

We’re going to look at the answers to these questions and more! We’ll research the 1900 silver dollar value. We’ll delve into its history and design. And we’ll check out some of the error coins known to exist.

Ready to learn more about this fascinating coin? Step this way!

History of the 1900 Silver Dollar

The coins known as Morgan dollars get their name from the man who designed them, George T. Morgan. They were first produced in 1878, with new coins minted every year up to and including 1904.

They were brought back again for a single year in 1921. And 100 years later, they were again issued as collectors’ items.

They were first produced in response to a campaign by the mining industry. It wanted a secure market for its silver, and lobbied for the Mint to be required to buy any they presented to it. The silver would then be made into coins.

The mine owners didn’t quite get what they wanted. But new legislation, known as the Bland-Allison Act, was passed requiring the Mint to buy a set amount of silver every month. The quantity was determined by value, with the requirement set at between 2 million and 4 million dollars.

The Act forced the Mint not only to buy all this silver, but to make it into coins.  That meant that huge volumes of Morgan dollars were produced every year.

In 1890, the Bland-Allison Act was replaced with a new law, known as the Sherman Silver Purchase Act. This replaced the requirement for the Mint to buy silver by value, with a requirement for it to buy it by weight instead.

The level was set at 4.5 million troy ounces per month. But the Mint was only required to turn it all into coins for the first year.

The idea was that all these coins would push up prices, allowing farmers to get more money for their produce. But in the event, it worked all too well. High inflation led to an economic disaster known as The Panic of 1893.

Congress responded by repealing the Sherman Act. And the following years saw mintages of silver dollars reduce dramatically. As a result, the Mint built up large reserves of unused silver. And in 1898, Congress ordered it be used for coins.

1900 saw a big rise in the production of Morgan dollars. Almost 25 million coins were struck. That was an increase of 65 per cent on the previous year. And it was the highest mintage for a decade.

Features of the 1900 Silver Dollar

The Obverse of the 1900 Silver Dollar 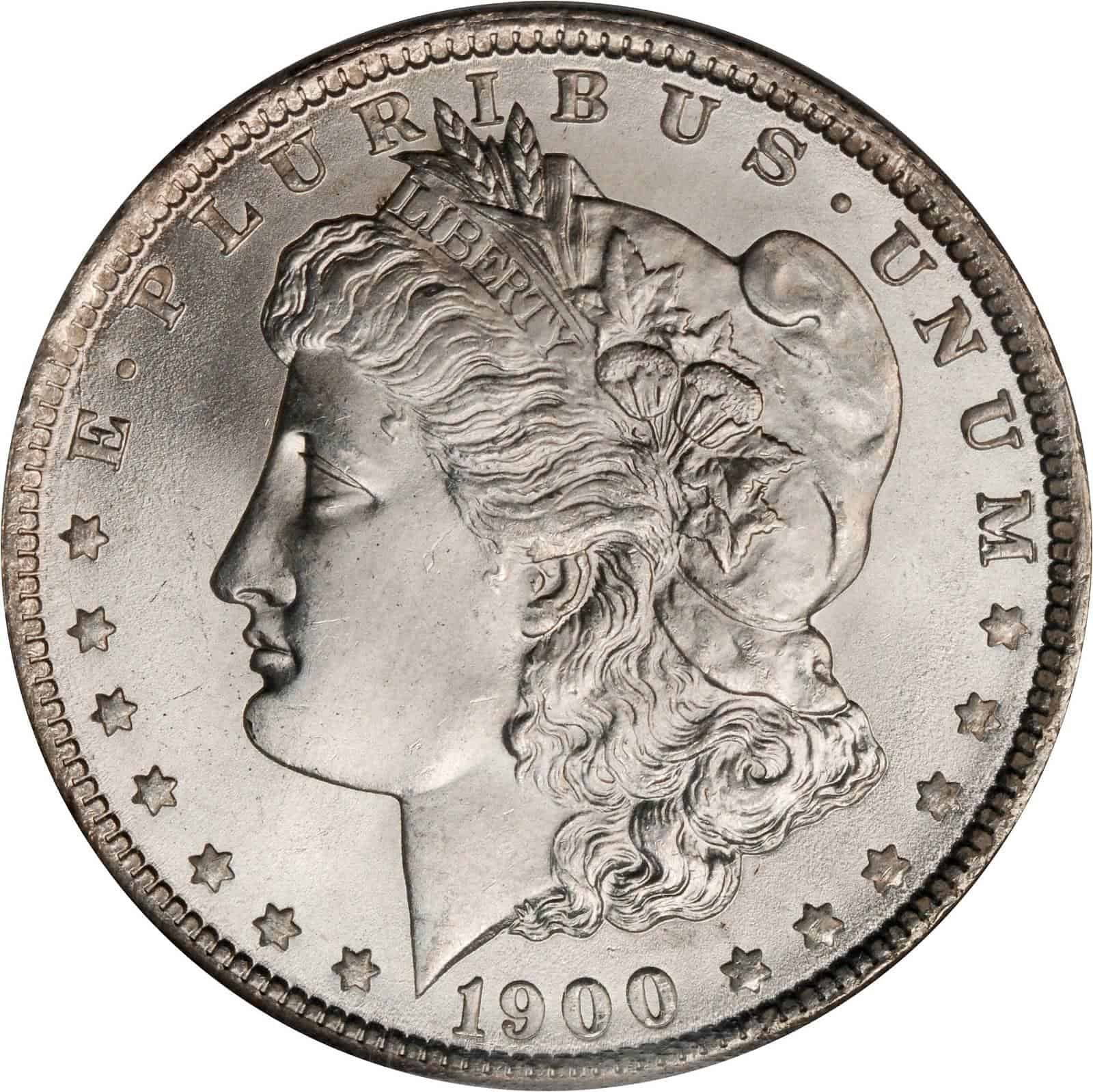 The obverse of the 1900 silver dollar shows the bust of Lady Liberty. She is depicted in profile facing to the left. A headband inscribed with “Liberty” leaves you in no doubt as to who you’re looking at.

But unlike earlier depictions of Lady Liberty on US coins, this image was based on a real person. And instead of the classical Greek tradition, she was based on an American woman. Her name was Anna Willess Williams, and she came from Philadelphia.

Anna was suggested as a model to Morgan by his friend, Thomas Eakins. Eakins was an artist too, and Anna – the daughter of a friend of his – had sat for several of his paintings.

At first, Anna was reluctant, but she eventually agreed on condition that she remained anonymous. Unfortunately, that wish was not granted. Shortly after the coin was launched, she was unmasked by a Philadelphia newspaper.

The ensuing fame – she was known as the “Silver Dollar Girl” apparently brought her considerable trouble. But Anna never commented on it, beyond describing the episode as “an incident of my youth”.

The image of Liberty is surrounded by a ring of stars, with a small letter “M” for Morgan beneath the neck. The date is at the bottom, while the Latin motto, “E pluribus unum”, is at the top. It means “From the many, one”, and is a reference to the creation of the USA from the many states.

The Reverse of the 1900 Silver Dollar 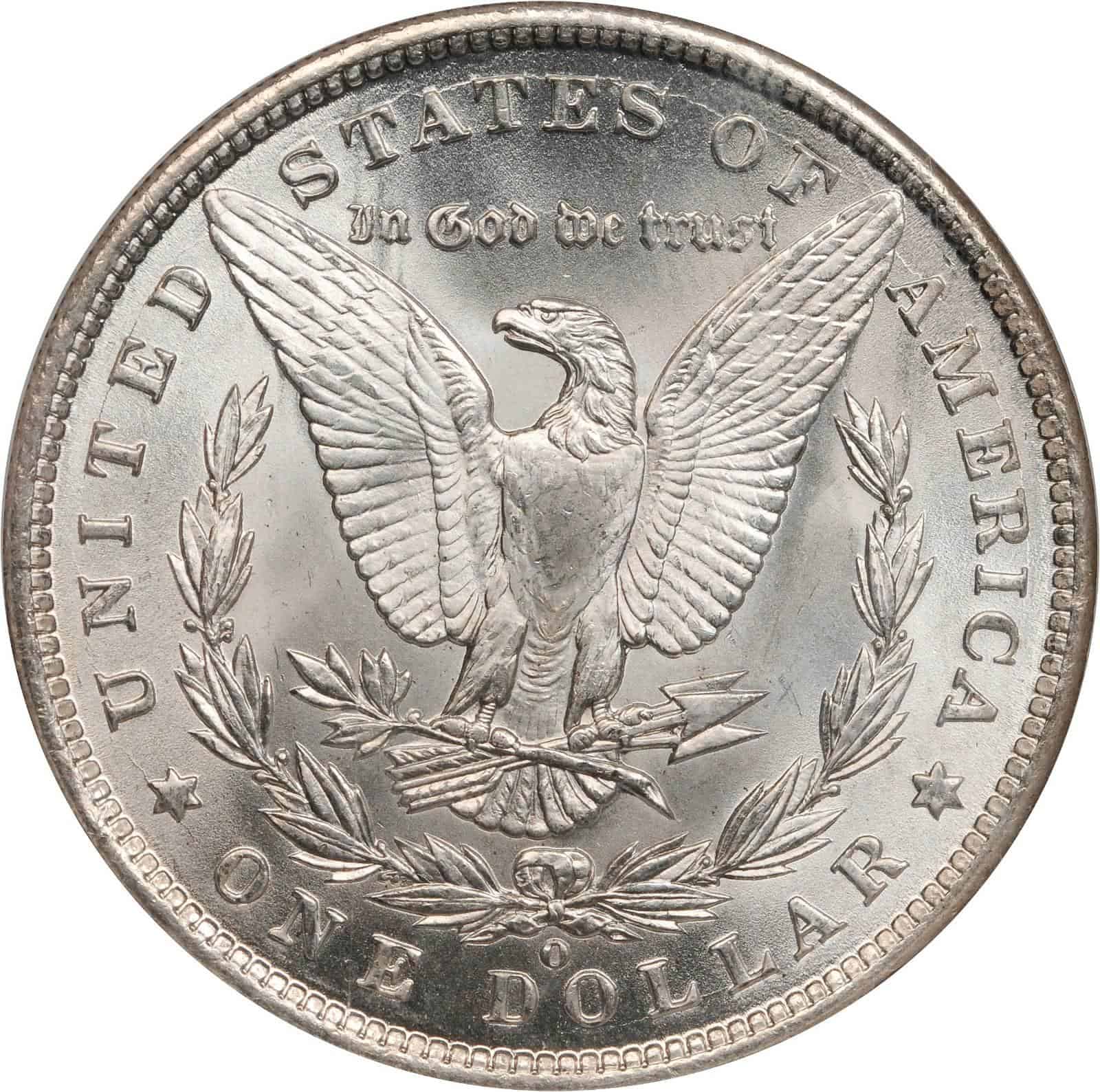 The reverse of the 1900 dollar carries another image by George T. Morgan. It’s another symbol of the United States – the bald eagle. The bird is shown perched on an olive branch crossed with a fletch of arrows. Its wings are outstretched, the tips stretching almost to the edges of the coin.

Around the eagle is a wreath tied by a ribbon. Above its head the words “In God We Trust” are inscribed in gothic script. Following the curve of the upper coin edge are the words “United States of America”, and the denomination of “One Dollar” is at the bottom.

Other Features of the 1900 Silver Dollar

The edge of the silver dollar has a design of parallel grooves which run at right angles to the coin faces. This is known as a “reeded edge”, and it’s formed by the collar which holds the planchet in place as it’s struck.

Aside from being decorative, it also had a practical purpose. It meant that any attempts to clip silver from the coin edge would be immediately obvious.

Each 1900 silver dollar measures 38.1 millimeters in diameter and weighed 26.73 grams when it was struck. That weight can reduce slightly over time, as the silver is worn away.

This YouTube video from ModernMiner shows you how to separate a real Morgan dollar from a fake.

Almost 9 million dollars were struck in Philadelphia in 1900. Even with many thousands of coins later melted down, it isn’t too difficult to find one to add to your collection.

It’s possible to pick up a coin graded “extremely fine”, XF45, for just $50. And even uncirculated coins can be surprisingly reasonable. A mint state MS63 dollar from 1900 is valued by the independent coin graders the PCGS at just under $100.

Coins that are prooflike – similar in quality to proofs – are more valuable at the same grade. And there are also “deep mirror prooflike” coins, abbreviated to DMPL. These combine high quality strikes with beautiful reflective fields (the flat areas of the coin design).

A prooflike 1900 dollar graded MS63 is worth almost six times as much as one without the prooflike designation. And the finest deep mirror prooflike 1900 Philadelphia dollar, graded MS67+, is valued at an incredible $75,000. 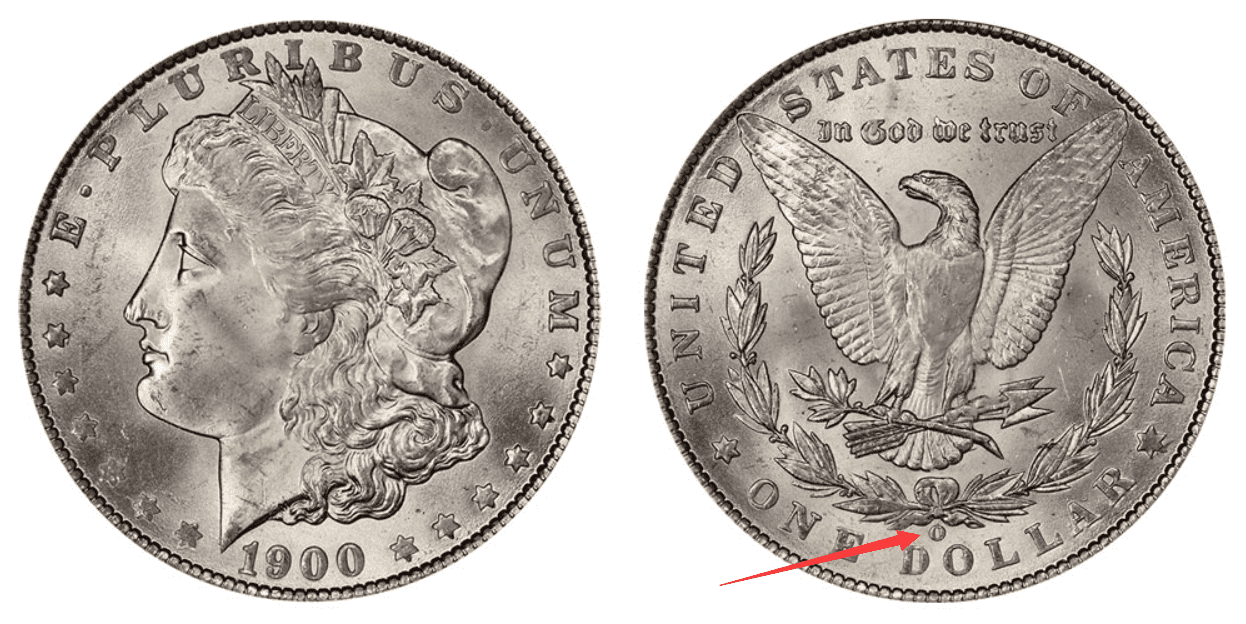 The New Orleans mint facility was the most prolific in its production of 1900 dollars, striking well over 12 million of them. Today, prices of regular coins are generally comparable to those of Philadelphia dollars. But prooflike and deep mirror prooflike examples are more plentiful.

A prooflike coin at MS67 is worth about $6,750. The finest deep mirror prooflike New Orleans dollar is a single specimen graded MS66, and that’s valued at $27,500.

Examples come up for sale only rarely. The auction record for a deep mirror prooflike dollar was set back in 2008. That saw a coin graded MS65 sell for just shy of $11,000. 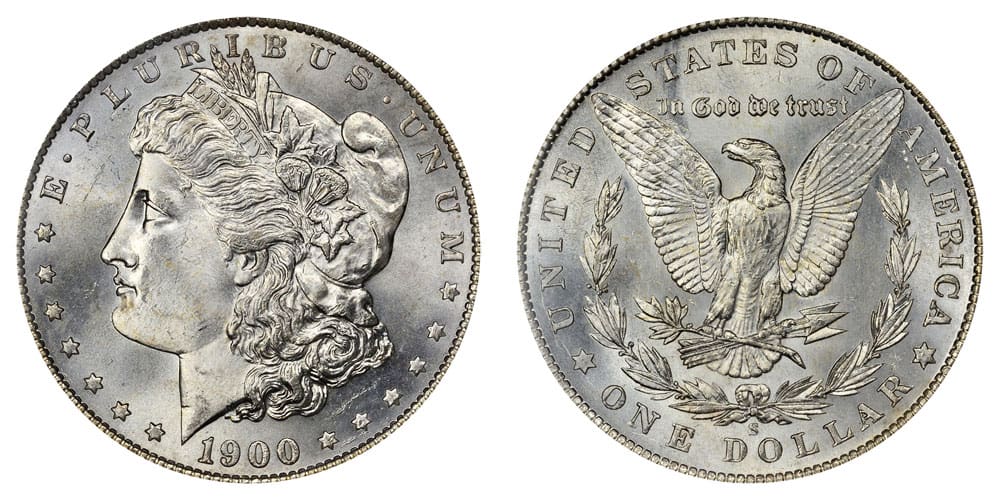 At just over 3.5 million, the mintage of 1900 San Francisco dollars was much lower than that of the other coin facilities. And at most grades, a San Francisco mintmark will command a premium.

Prooflike coins are relatively easy to source. Most don’t have a particularly rich lustre. And there are few deep mirror prooflike coins in high grades. The finest known example is graded MS65, and the PCGS values it at $30,000. 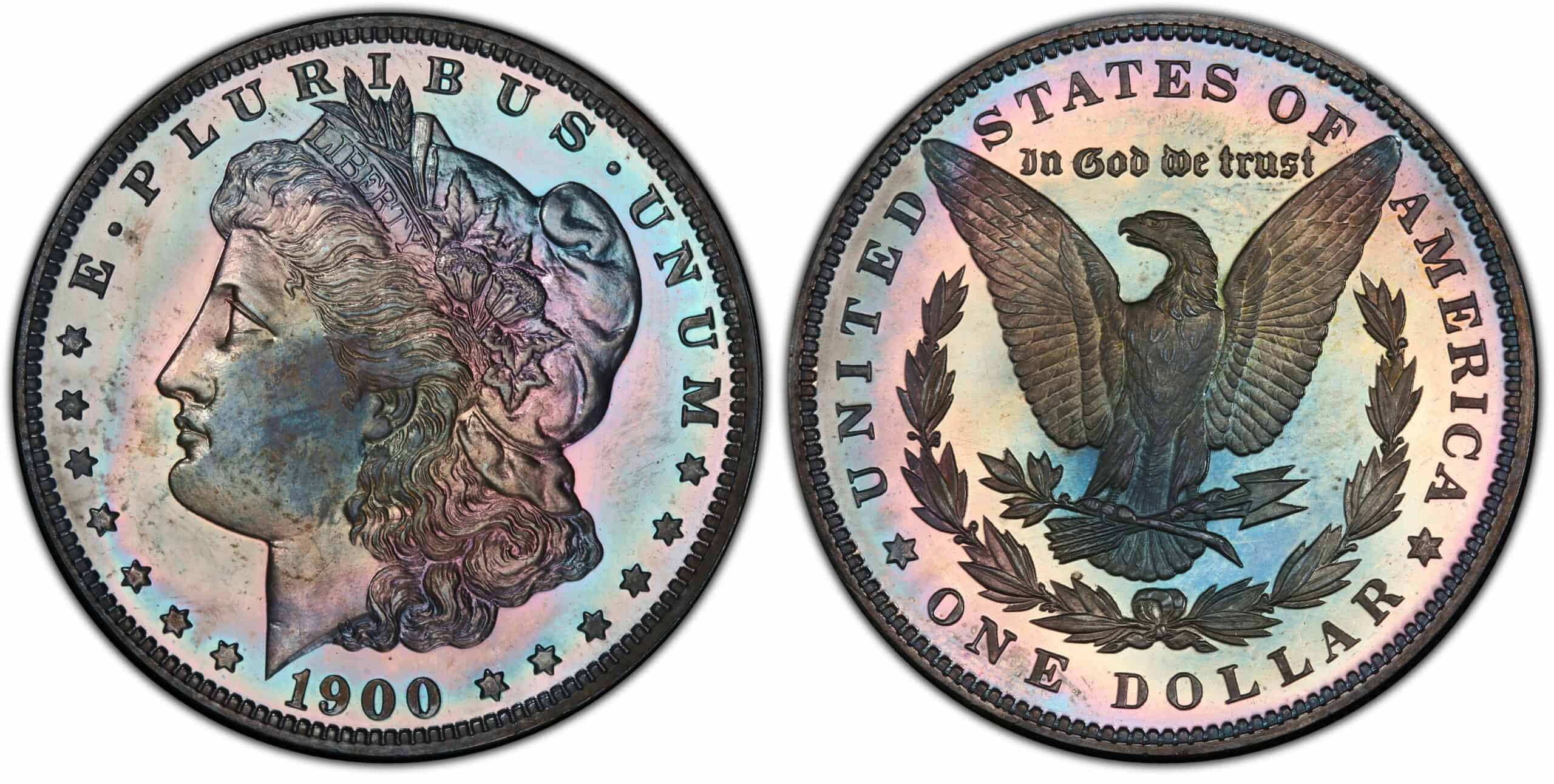 True proof 1900 dollars were produced at the mint facility in Philadelphia. Under 1,000 coins were minted. Amongst them are some with the cameo and some with the deep cameo designation. 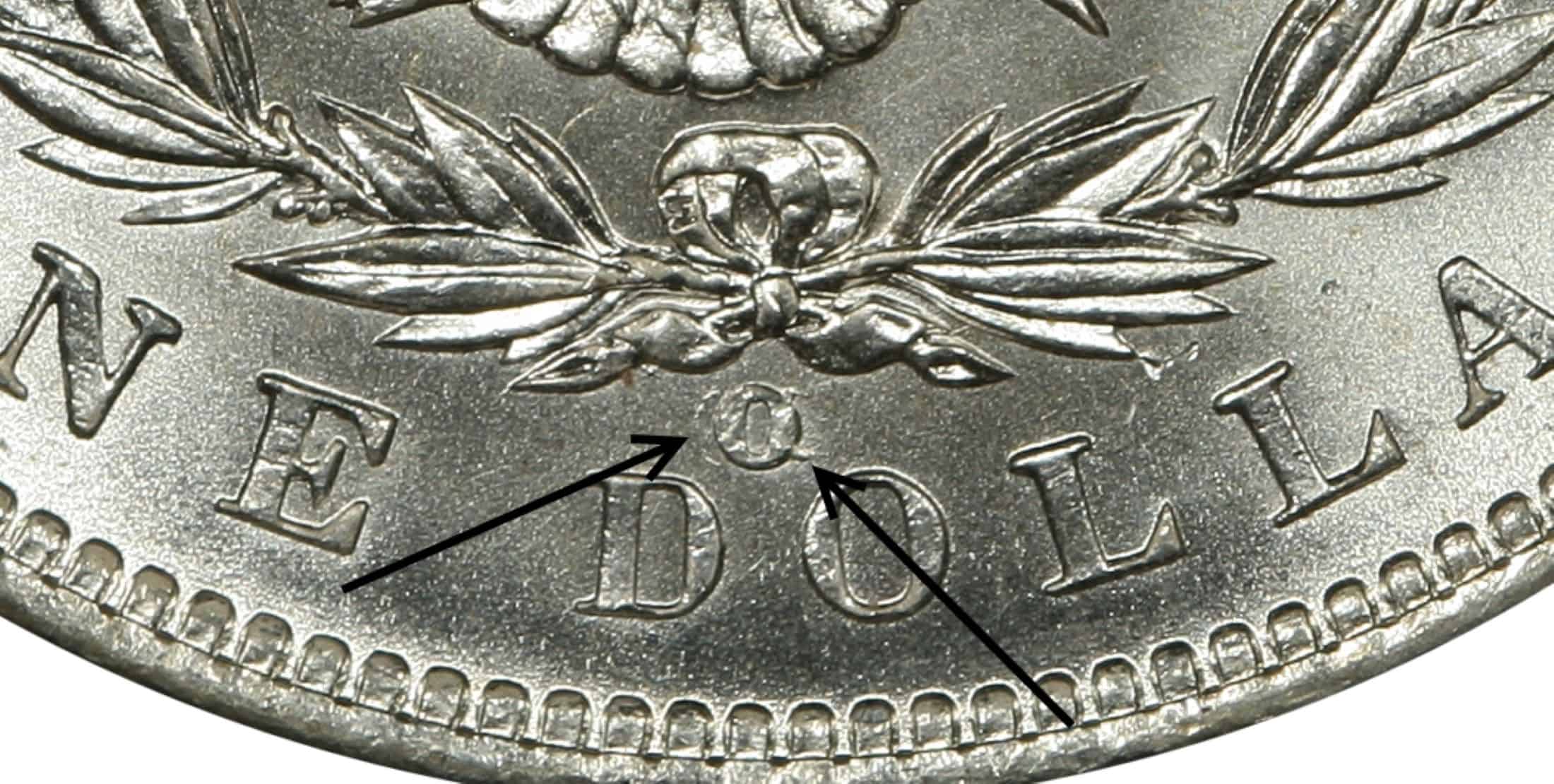 Amongst the 1900 dollars are some very interesting error coins. That includes some with an over mintmark. Originally struck with a “CC” for Carson City, an “O” for New Orleans was then punched over the top.

But with the two mint facilities over 2,000 miles apart, how could such an error have occurred?

The dies for all the 1900 dollars were made at Philadelphia. This included a die destined for Carson City, complete with the “CC” mintmark. But Carson City had stopped making silver dollars after 1893, so the die was not needed. Instead it was sent to New Orleans, and the mintmark repunched.

Even more intriguingly, this error was made on more than one die. No-one knows how it happened. But the result is that there are a number of different varieties of the 1900 O over CC mintmark.

No prooflike or deep mirror prooflike examples are known to exist. But there are thousands of regular coins with this error, including hundreds in mint state.

Double die errors occur as the dies used to strike coins are made. In the past, the die needed to be struck repeatedly to capture all the detail from the hub. If it moved between strikes, a double image would be created. This would then be replicated on the coins struck from the die.

The 1900 Morgan dollars include examples with doubling on the reverse. Look for it on the bunch of arrows on which the eagle is perched. You’ll need a microscope or loupe to spot it.

As with all coins, the finer the quality, the more valuable it will be. A 1900 dollar with a double die reverse, graded XF45 and which had been cleaned, sold at auction for $30. But a coin with the same error graded MS65 sold for $250.

This YouTube video from Couch Collectibles looks at a selection of 1900 Morgan dollars with errors.

What makes a 1900 silver dollar valuable?

All 1900 silver dollars will have an intrinsic value because of their silver content. But coins in better condition, with a prooflike or deep mirror prooflike designation, can be worth far more. The same goes for proofs with a cameo or deep cameo designation.

There are thousands of different varieties of Morgan silver dollars, each given their own VAM number to identify them. A few of these – known as the Morgan Top 100 – attract a price premium.

Amongst them are ten varieties from 1900. Eight have the CC over O mintmark. The other two are the VAM15 “Doubled Stars” and the VAM29A, with a die break.

Where is the mintmark on a 1900 Morgan silver dollar?

If a mintmark is present, it will be on the reverse of the coin, just above the denomination. Look for it positioned above and between the letters “D” and “O” of “DOLLAR”.