Liberty Head dollars (Morgan dollars) are coins produced from 1878 to 1904. After a pause, the US Mint struck them in 1921 and then began again in 2021. These beautiful coins are among the most famous and collectible American coinage.

You should be prepared that the 1897 silver dollar value can be pretty high in higher grades. Plus, they are an excellent investment regardless of the preservation level, thanks to their high silver content.

History of the Silver 1897 Morgan Dollar

Engraver George T. Morgan did an excellent job designing Liberty Head dollars, popularly named Morgan dollars. Their production lasted from 1878 to 1904, but the US Mint had one more shoot in 1921. In honor of that date, the new minting started in 2021, but only pieces from the early series are highly collectible.

Interestingly, silver Morgan dollars minted in 1897 were initially rare because most were never released in circulation. Large quantities were released decades later, and these coins began common by the 1950s, particularly in eastern banks.

Once the Treasury released more pieces without the mint mark from 1962 to 1964, their price decreased. However, all Morgans were valuable because of their silver content, and Americans considered them an excellent investment.

Features of the Silver 1897 Morgan Dollar

The 1897 silver Morgan dollar is a part of the early series. Nowadays, these pieces are in a group of the most beautiful and highly collectible American coinage.

The obverse of the silver 1897 Morgan dollar 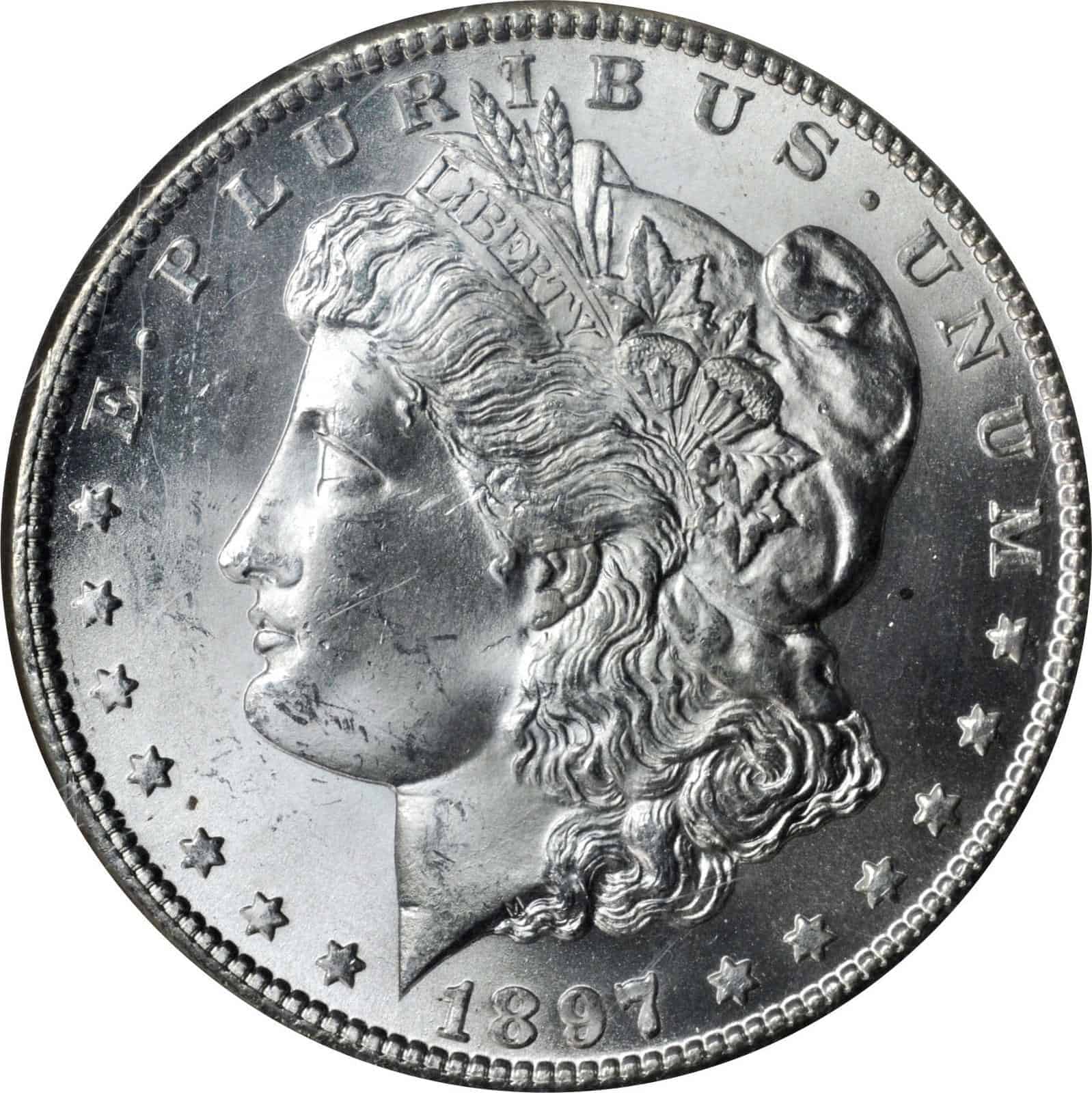 A portrait of the beautiful Lady Liberty is centrally positioned on this coin obverse. The E*PLURIBUS*UNUM and 13 stars surround this composition, while the DATE is struck on the bottom coin rim. You can notice that the figure wears a Phrygian cap, a crown with written LIBERTY, and a bouquet of flowers and wheat in her hair.

The reverse of the silver 1897 Morgan dollar 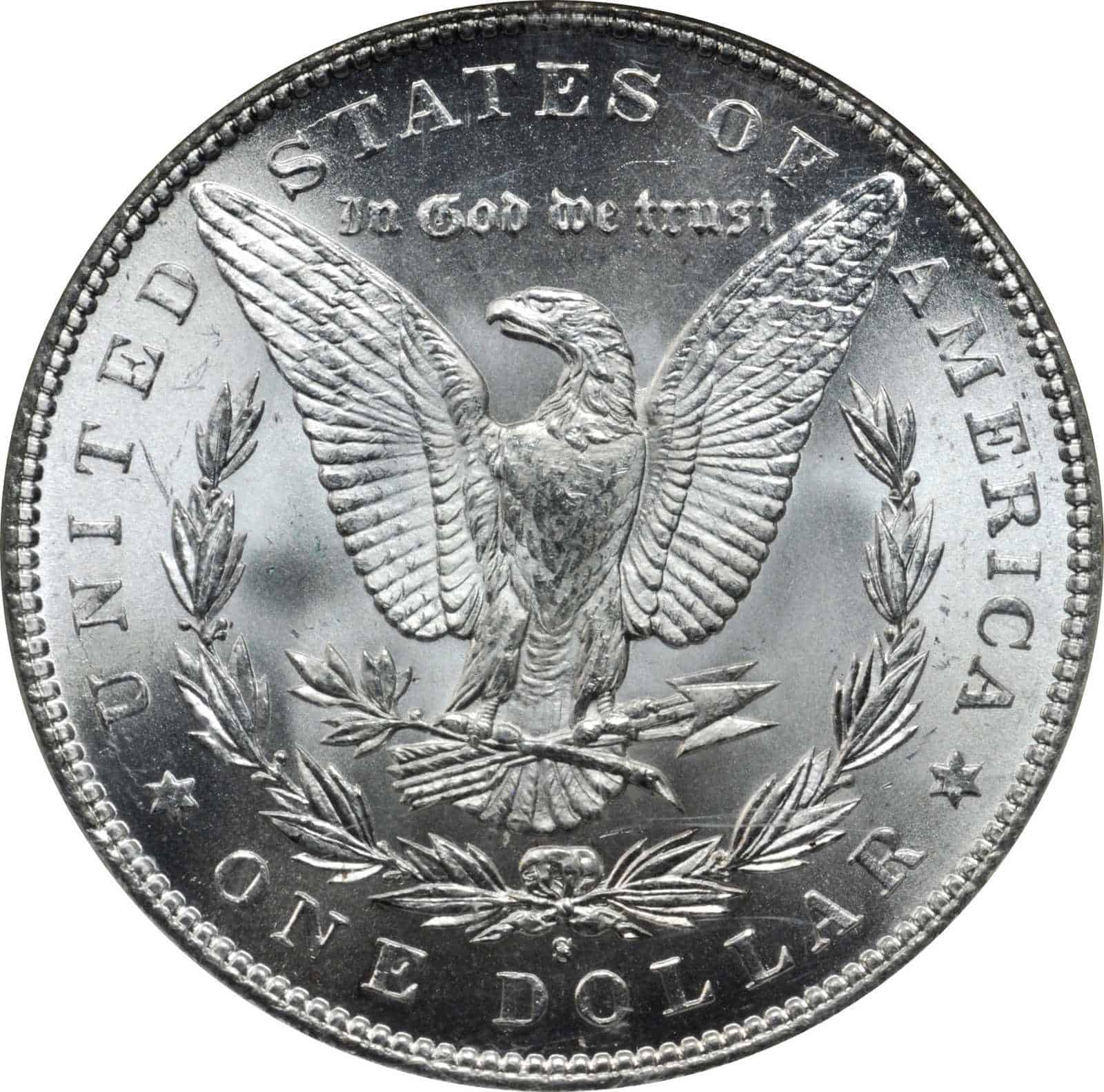 The 1897 silver Morgan dollar reverse includes the centrally positioned heraldic eagle with a branch and arrows in its talons. A wreath made of laurel leaves surrounds the composition, symbolizing peace. Above the bird’s head is a motto, IN GOD WE TRUST, while the country name and the denomination are struck along the coin rim.

Other features of the silver 1897 Morgan dollar

A total of 12,651,731 silver Morgan dollars were struck in three mints in 1897. The San Francisco mint had the highest mintage of 5,825,000, while the one in Philadelphia produced two coin types. 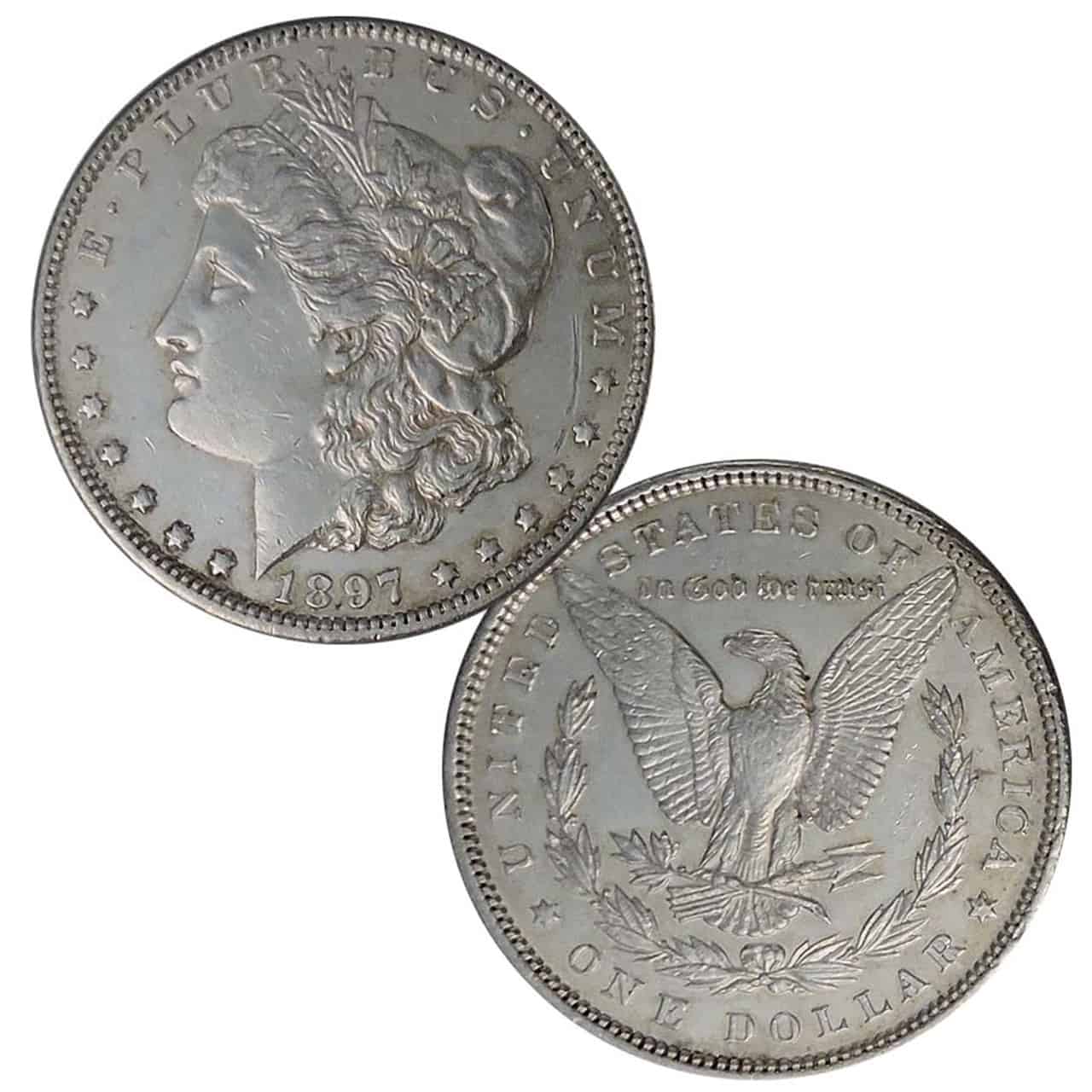 Precisely 2,822,000 silver Morgan dollars were struck in Philadelphia in 1897. Each piece is worth some money because of the silver content, but collectible coins can be pricey.

Precious and highest-rated proof-like Morgans can cost an astonishing $8,000 to $9,600. Collectors always look for DMPL specimens, but their price is always high, particularly in an MS 66 grade. Such coins often reach $15,000 to $18,000 at auctions. 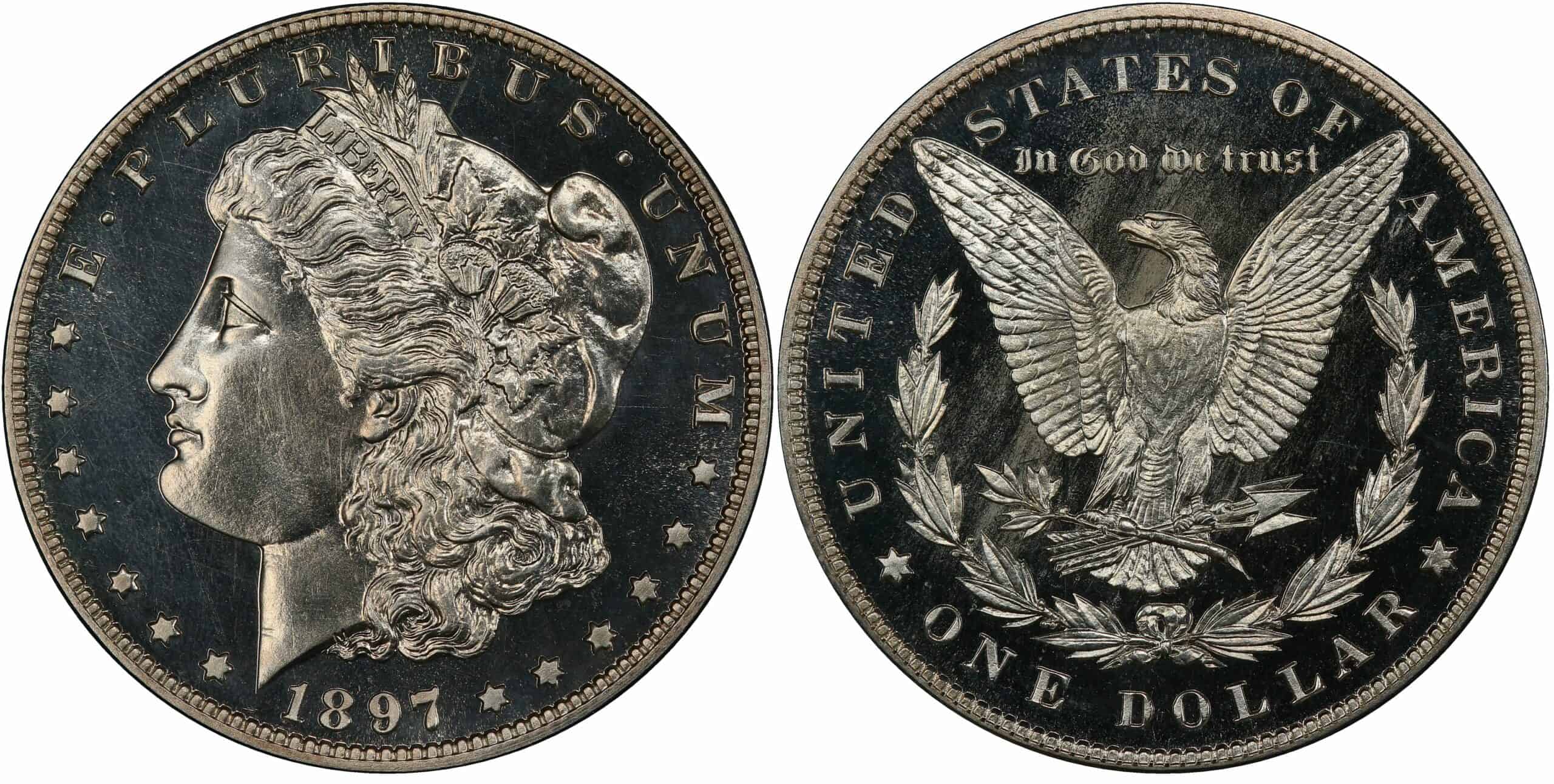 Since the Philadelphia mint produced only 731 proof silver dollars in 1897, you can expect them to be expensive nowadays. Even the lowest-graded pieces are worth $1,000, while the best specimens cost a fantastic $10,200 to $12,400. 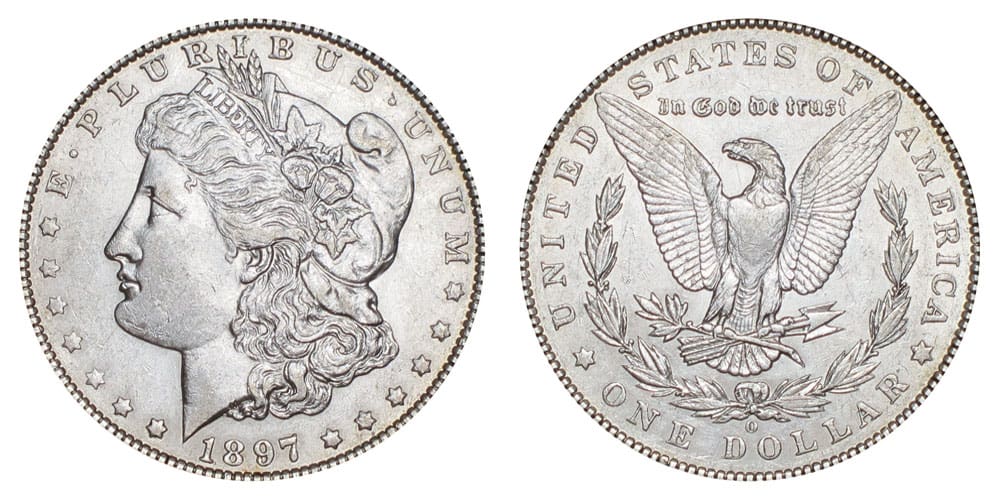 Even though the mintage of 4,004,000 Morgan dollars produced in New Orleans was the second highest in 1897, most were spent years in circulation. Despite that, these coins are pricey in any condition.

Even the heavily worn-out specimens are valuable because of their silver content, while collectible pieces can reach a price of $30 to $575. All well-preserved Morgans are expensive and typically cost $1,100 to $65,000.

The most expensive 1897 O silver MS 67 Morgan dollar is even more costly. One collector grabbed it in 2020 for $348,000 at Stack’s Bowers to add such a unique piece to his collection.

Even though you can sometimes find 1897 silver Morgan dollar errors, they are sporadic and not particularly valuable. Some come with an impure metal streak, double die, or obverse struck-through errors, but these imperfections are not recognized as typical for coins struck this year.

FAQ about the 1897 silver Morgan Dollar

Silver Morgan dollars are probably the most beautiful and collectible American coins. Since they are over a century old, pieces in perfect condition are rare and valuable. The most precious and scarce coins struck in 1897 are those from New Orleans.

Which 1897 silver Morgan dollar is worth a lot of money?

How much is 1897 No Mint mark silver Morgan dollar worth?

What is the most pricey silver Morgan dollar?

Many silver Morgan dollars are expensive, and more than a dozen are worth over one hundred thousand dollars. Three pieces that reached the highest prices at Stack’s Bowers are: