The 1896 silver dollar is an example of what’s known to collectors as the Morgan dollar. But is there anything special about this particular mintage?

That’s what we’re here to find out! We’re going to look at the 1896 silver dollar value, its history, and its key features. And we’ll also explore some of the different error coins out there, and investigate just how much they’re worth.

So if you’re ready to find out more, step this way …

History of the 1896 Silver Dollar

Morgan dollars were minted every year from 1878 to 1904. They were brought back for a single year in 1921, and then again as a collector’s piece in 2021. They get their name from the man who designed the images on both sides, one George T. Morgan.

The coin’s launch came after lobbying from the mining industry. Mine owners wanted the Mint to take any silver brought to it and return it as coins. But instead, new legislation was passed that required the Mint to buy a set amount of silver every month.

The law was called the Bland-Allison Act, and it committed the Mint to buying silver worth between two and four million dollars every month. All that silver had, by law, to be made into coins. That meant an awful lot of Morgan dollars were minted.

In 1890, the situation changed. The Bland-Allison Act was replaced by a new law, called the Sherman Silver Purchase Act. This removed the requirement for the Mint to buy silver by value, and replaced it with a requirement to buy it by weight instead.

The Mint was obliged to purchase 4.5 million troy ounces of silver every month. But while the silver purchase requirement was ongoing, the requirement to turn it into coins lasted for only one year.

The idea was that more coins entering circulation would lead to an increase in prices. Farmers had been suffering with poor returns on their produce, and this was intended to help them.

But the plan worked too well. Inflation soared, firms went bankrupt, and there was a run on several banks. The disaster, known as the Panic of 1893, spurred Congress to repeal the Sherman Act in November of that year.

By now, the Mint had large quantities of unused silver. It was not until 1898 that Congress ordered that all that remaining silver be converted into coins. Nevertheless, with the economy recovering, 1896 saw a marked upturn in dollar production.

Just under 10 million dollars were struck that year in Philadelphia. Another 5 million were struck in San Francisco, and 4.9 million in New Orleans. The 1896 dollars produced in Philadelphia also included a number of proof coins.

Features of the 1896 Silver Dollar

The Obverse of the 1896 Silver Dollar 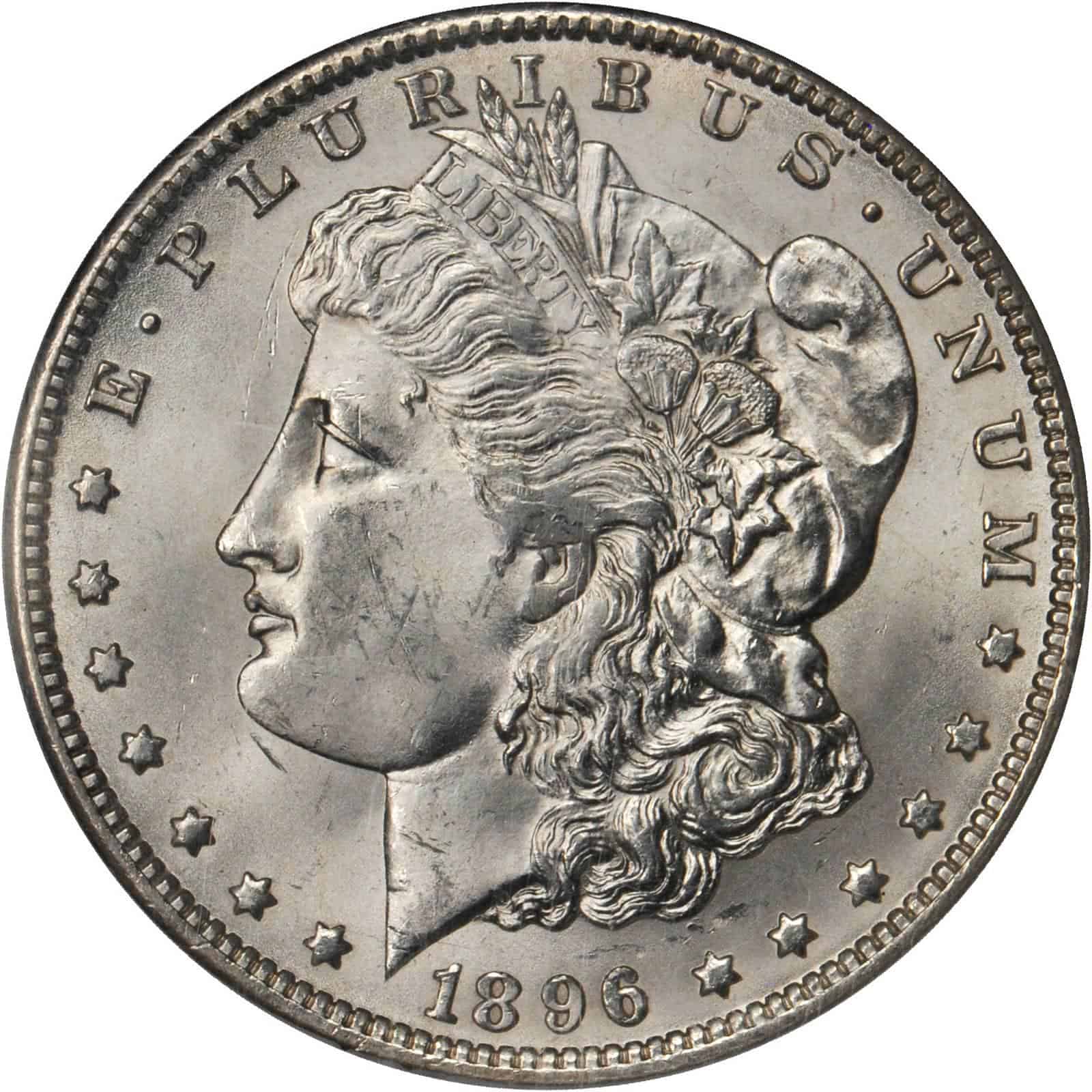 The obverse of the 1896 silver dollar shows the head and neck of Lady Liberty in profile.

At this point, no images of real people had been used on US coins. The previous version of the dollar had also featured Lady Liberty, but there she was depicted full-length. The image had given the coins their nickname of the “Standing Liberty” dollar.

The Liberty in that dollar had been portrayed in classical Greek style, with draped robes. But for his version the designer, George T, Morgan, wanted an American face.

His friend, an artist by the name of Thomas Eakins, suggested a model named Anna Willess Williams. Anna was the daughter of another friend of Eakins, and she had already sat for several of his paintings.

At first, Anna was reluctant to take part in the project. She eventually agreed on condition of anonymity. After five sittings, a delighted Morgan pronounced her profile “perfect”.

Unfortunately for Anna, a Philadelphia newspaper revealed her identity shortly after the launch of the new coin. She quickly gained fame as the “silver dollar girl”, but some stories say she lost both her job and her fiancé as a result.

Today, she is immortalized facing left on the coin, her image surrounded by a ring of stars. Below her neck is a small letter “M” for Morgan.

At the bottom of the coin is the date, and at the top, the Latin motto “E pluribus unum”. It means “From the many, one” and refers to the creation of the USA from the separate states.

The Reverse of the 1896 Silver Dollar 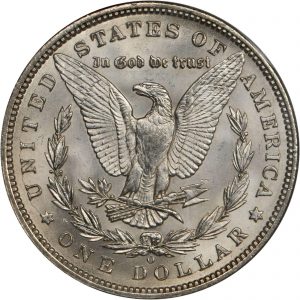 Turn over the 1896 dollar, and you’ll see Morgan’s image of a bald eagle, symbol of the United States. The bird appears perched on a fletch of arrows and a sprig of leaves, head raised and wings outstretched.

The wing tips stretch almost to the outer edges of the coin, filling the spaces between “United” and “States”, and “Of” and “America”. Surrounding most of the image is a wreath tied with ribbon.

Immediately above the eagle’s head is the words “In God We Trust”, inscribed in Gothic script. The country name appears following the curve of the top edge of the coin. The denomination is at the bottom.

Other Features of the 1896 Silver Dollar

There are both proof and prooflike 1896 silver dollars. The proofs were struck in Philadelphia, so they don’t have a mint mark. You can find prooflike coins from Philadelphia too, as well as from New Orleans and San Francisco.

Many proofs have a darker, almost charcoal, finish. And they tend to get hairlines more easily than prooflike coins.

Proofs also have what’s known as a “squared-off” or “wire” edge. In other words, the edges of the coin rim are sharp and distinct. And each of the denticles – the small blobs next to the rim – will have a squared-off edge when viewed from the side.

This YouTube video from TheCoinGeek takes you through how to tell the difference between proof and prooflike Morgan dollars. 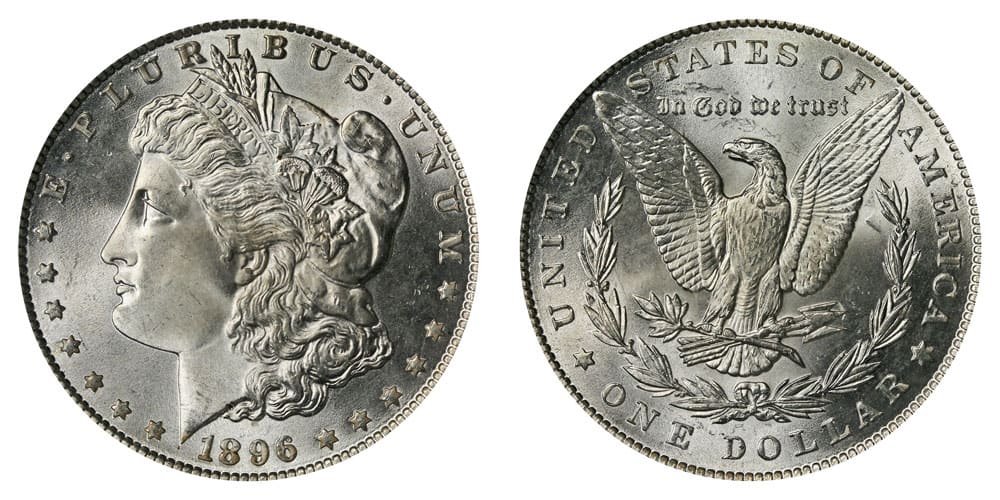 The large mintage of the 1896 dollar struck in Philadelphia means that even now, over 100 years on, finding one isn’t too difficult. An extremely fine coin, graded XF45, is valued at around $50 by independent coin graders the PCGS.

In mint state, prices are higher. But you can still get a gem quality MS65 dollar for about $275.

The finest mint state examples graded by the PCGS are MS68. Three coins have been graded at this level, and they’re valued at $35,000 each. For a deep mirror prooflike Philadelphia dollar, the finest example known is graded MS67, and valued at $25,000. 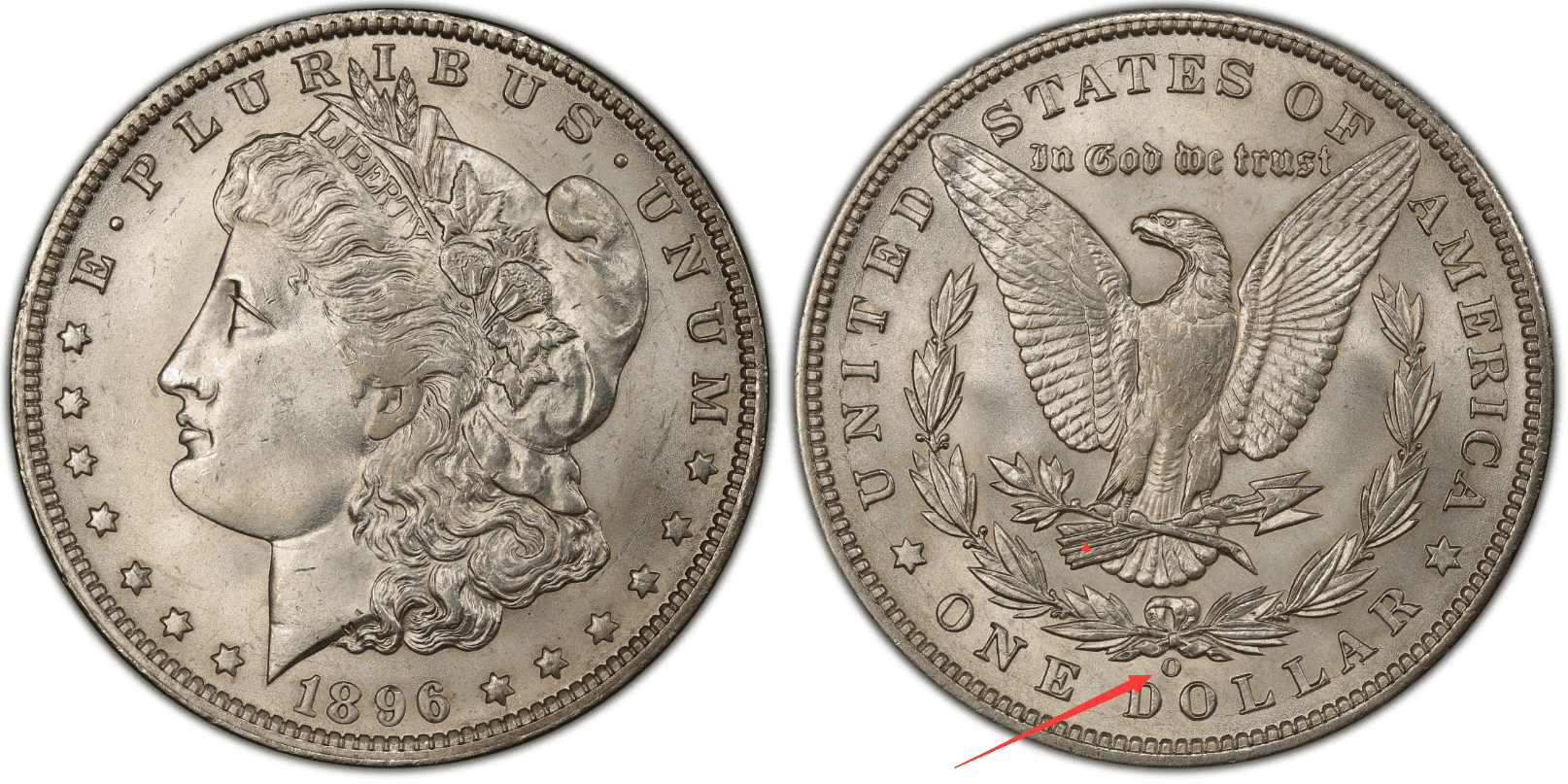 The 1896 silver dollar struck in New Orleans had the lowest mintage of any of the facilities at 4.9 million coins. And they’re much harder to find in high grades.

An extremely fine (XF45) 1896 dollar from New Orleans has a value double that of the same grade coin from Philadelphia. It’s worth about $100.

When it comes to values for circulated coins, 1896 silver dollars from San Francisco are the cream of the crop. A coin graded extremely fine (XF45) is worth upwards of $600.

At higher grades, the population drops significantly. At MS64, there are believed to be between 750 and 1,500 surviving coins. And only about 150 to 250 gem quality coins are thought to exist.

The finest mint state example graded by the PCGS is a single coin graded MS69. That sold at auction in 2020 for a record breaking $720,000.

To date, not a single deep mirror prooflike example has been graded by either of the two main independent coin graders, the PCGS or NGC.

Watch out for fakes. There are examples of Philadelphia dollars where an “S” mint mark has been added later.

Proof silver dollars came out of the mint facility at Philadelphia. And as Philadelphia also produced prooflike coins, you’ll need to look carefully to tell them apart.

A partial collar error happens when the blank sits incorrectly in the collar die. As a result, when the coin is struck, some of the metal from the planchet escapes past the collar. That gives the edge of the coin a stepped appearance.

An 1896 dollar from New Orleans with a partial collar error was sold recently at auction. It was graded AU55 (“almost uncirculated”) by the PCGS. And it sold for over $300.

One 1896 dollar struck in Philadelphia showed a lamination error on the obverse, running along Liberty’s cheek. The coin was graded MS64 by the NGC, and sold at auction for $70.

Strike through errors occur when a foreign body gets into the coin press. The coin is struck through the object, leaving a mark on the coin surface. (Sometimes the debris is pressed into the coin itself, in which case the error is known as “strike through and retained …”.)

This happened with an 1896 dollar struck in Philadelphia. The error is visible on the obverse, with a thick line snaking through Liberty’s chin and neck. The coin was graded MS63 by the PCGS and sold at auction for $175.

This YouTube video from Couch Collectibles offers a detailed look at 1896 Morgan dollars with errors.

Despite their age, not all 1896 silver dollars are rare. Those with a mint mark from San Francisco (“S”) or New Orleans (“O”) are rarer than those from Philadelphia (no mint mark).

The better the quality and condition of the coin, the rarer it will be. Coins with good detail and free of marks are scarcer, and hence more valuable. And errors made by the mint are rare too.

The value of every coin is linked to its scarcity. The rarer it is, the more valuable it will be to collectors.

An 1896 silver dollar in very poor condition is unlikely to be worth more than the silver used to make it. But if it’s in good condition, with a high grade from an independent coin grader, it will be worth far more.